In the artist’s new video installation, a powerful and disconcerting juxtaposition of showmanship, spectacle, and ritual. 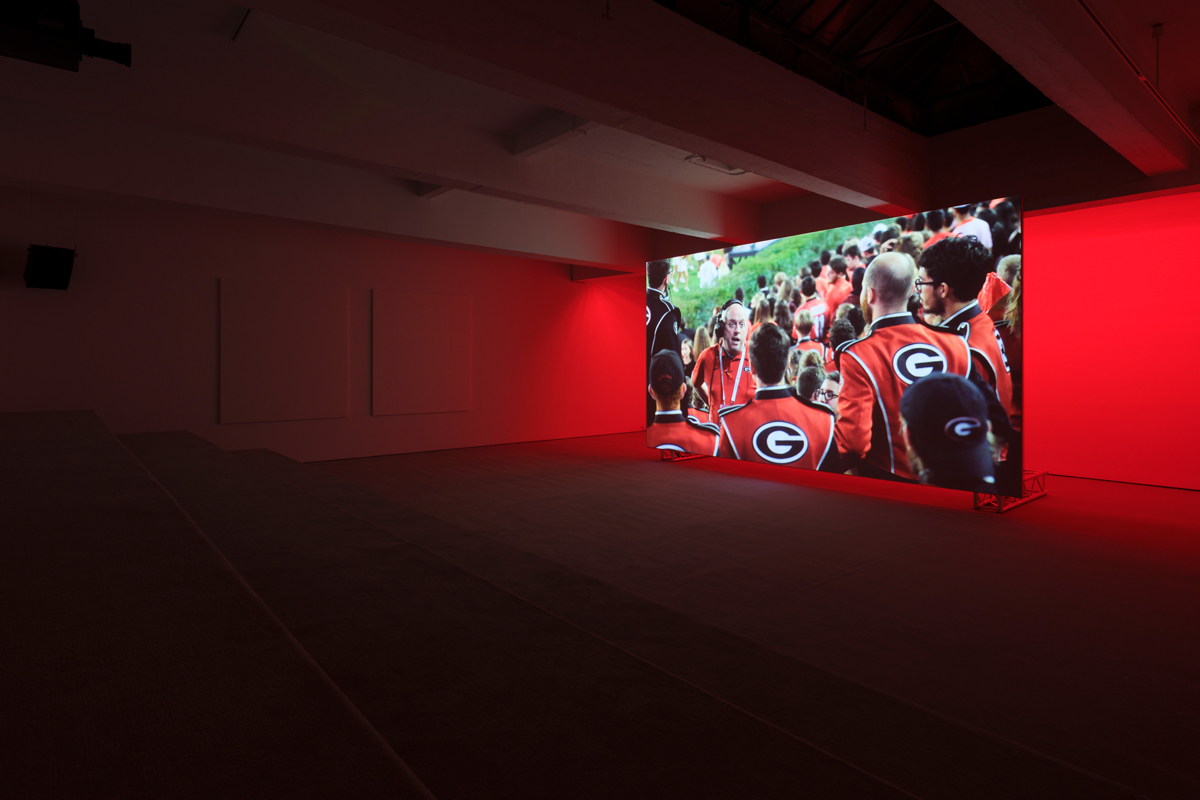 In Amazing Grace / RGB (2019), Paul Pfeiffer’s previous large-scale project in New York City, fifty members of the University of Georgia’s Redcoat Marching Band performed at Harlem’s famed Apollo Theater, while the remaining members’ accompaniment was live-streamed from UGA’s Sanford Stadium. The Redcoats feature again, amid their directors, athletes, coaches, audiences, and stadium environs, in Red Green Blue (2022), a video installation currently on exhibit at Paula Cooper Gallery. The single-channel video is comprised of edited sounds and images culled from the spectacle that is a Southeastern Conference college football game. As with the earlier work, in which two distinct venues were juxtaposed, Pfeiffer’s new project posits a neat mirroring between otherwise dissimilar public spaces for viewing: the mass cultural sports arena and the more rarefied “white cube” art gallery. A carpeted, three-tiered seating/viewing platform that calls to mind bleachers, but plusher in texture and ampler in proportions, is conducive to staying a while, as the durational experience with surround sound unfolds to reveal a work of haunting intimation and formal rigor.

Constructed from multi-camera sequences that utilize filmic devices such as the close-up, the slow zoom, and shifting focal lengths and depths of field, as well as multi-microphone recordings of correspondingly nuanced sonic layers, the synthesized whole is structurally attuned to the lulling, even hypnotically suggestive mode of the repetitive loop. Further, as with first-person video games in which players are dropped into a world fully formed, the camera’s, and hence our, POV is one of being immediately “embedded,” with the distinction that our range of vision is not centered or fixed vis-à-vis linear perspective but rather is partial, fragmentary but with heightened detail, and relative to other bodies, proximal. Toned and once-toned arms are short-sleeved and crossed, tattooed and akimbo. Cymbals and horns are weathered here but gleam there, as do silver buttons and coiled decorative threads. An outsize cleat is a mismatch for the one on a kicker’s other foot; a broadcaster peers over his reading glasses; a female coach with a headset has secured her cap and hair with a light-blonde bobby pin. The camera eye is steady, and the edits are quick but never jarring. There, the blurry back of law enforcement, and a cheerleader/fan’s face and body painted Team Bulldog black. Marked attention is accorded manual gestures: fingers snap, text, hold folded sheet music as an ad hoc stand, release then press brass keys in tempo. Other fingers fiddle with whistles or flip through color-coded clipboard pages. 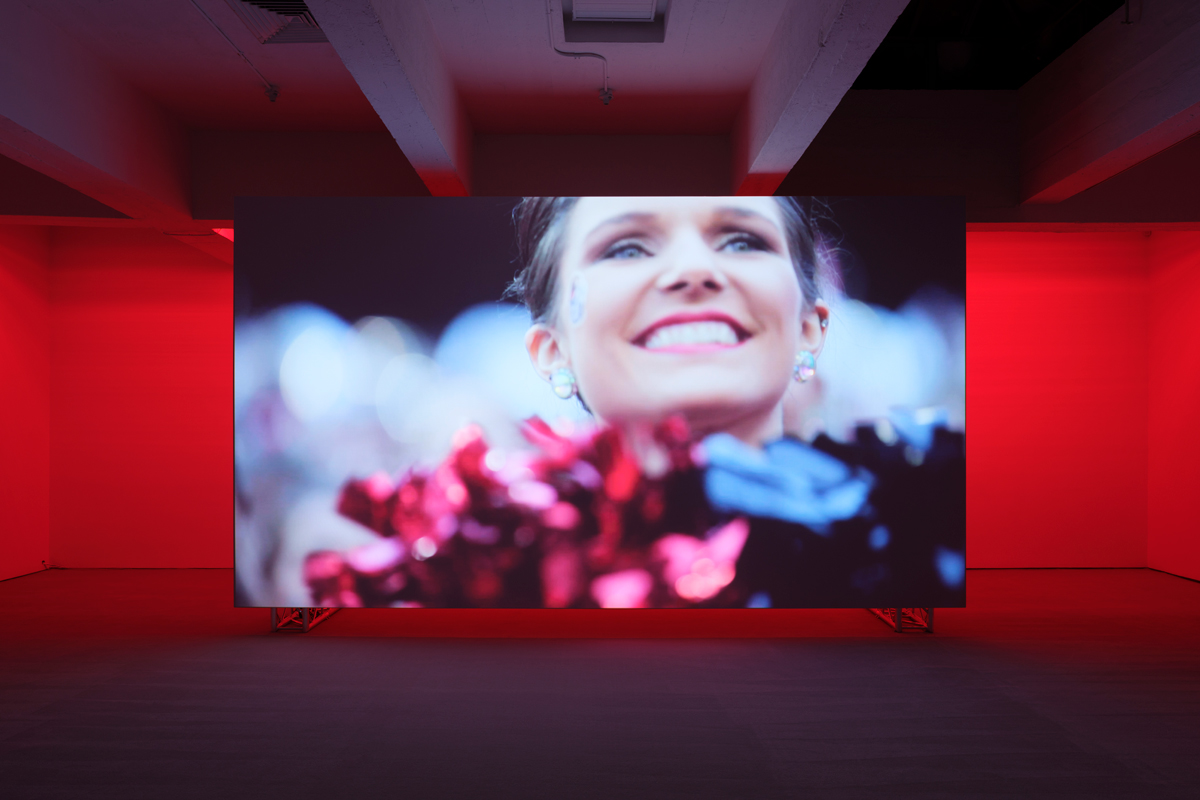 Sound is similarly fragmented yet purposive. Pfeiffer has characterized the band as a “live soundtrack and musical generator of crowd affect,” and indeed, their music plays in stops and starts, presumably apace with climactic turns or pauses in the game. Disjunctive bits of dialogue match up elliptically with the visuals, while other enunciations are crystal clear, however out of earshot the camera would seem to be from the speaker. Most striking with regard to the soundtrack is its subdued overall tenor, disconcerting, perhaps, for those expecting a more thunderous pitch, as normalized for such events. 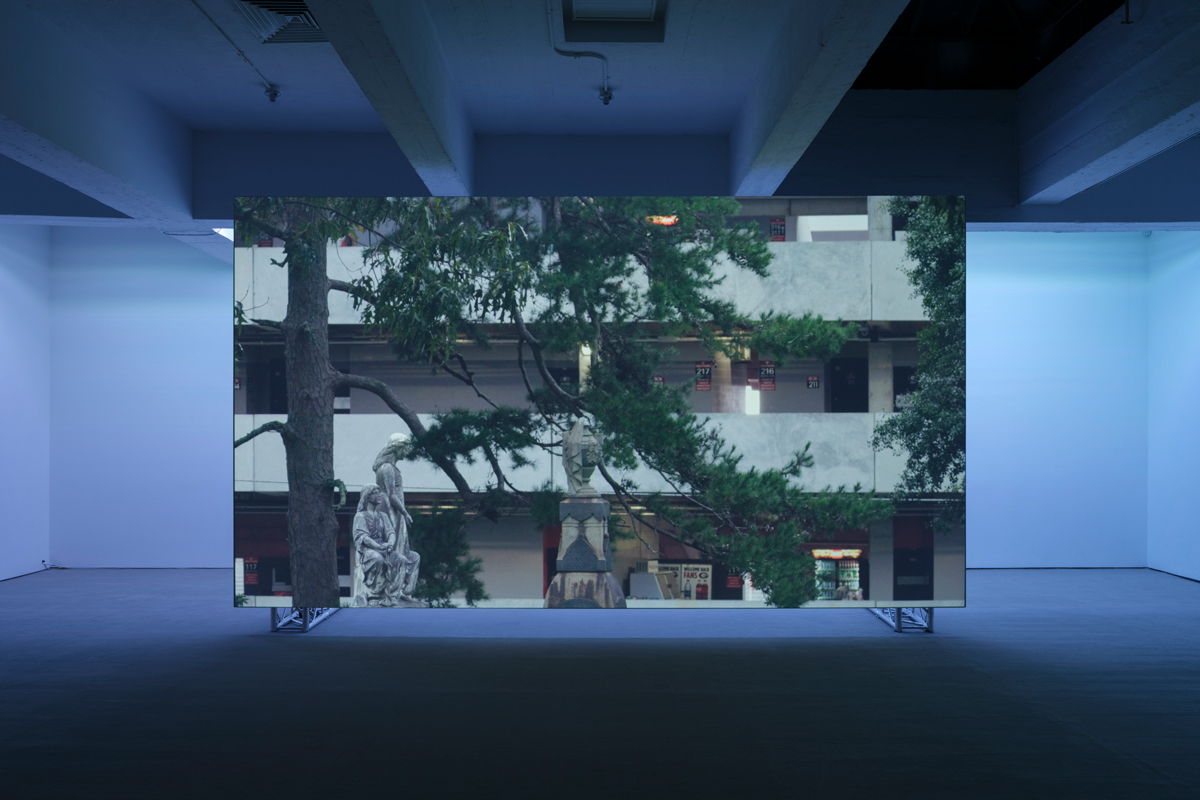 At its most muted, this soundscape acts as an effective transitional device as well, linking the relative calm and quiet of the exterior scenes interspersed throughout. The foliage just outside the stadium suggests autumn, or almost. Concrete parking lot levels in the distance appear stacked atop cemetery headstones that have settled wonkily into unlevel ground, suggesting other strata, bodies, and histories of the landscape upon which the stadium complex is built. There are no dramatic plays slo-mo’ed and replayed in an instant to amp up narrative flow, but a drip, drip of dew on a lowered flag or a lone jumbo stadium light against the night sky might suggest a denouement of a kind. 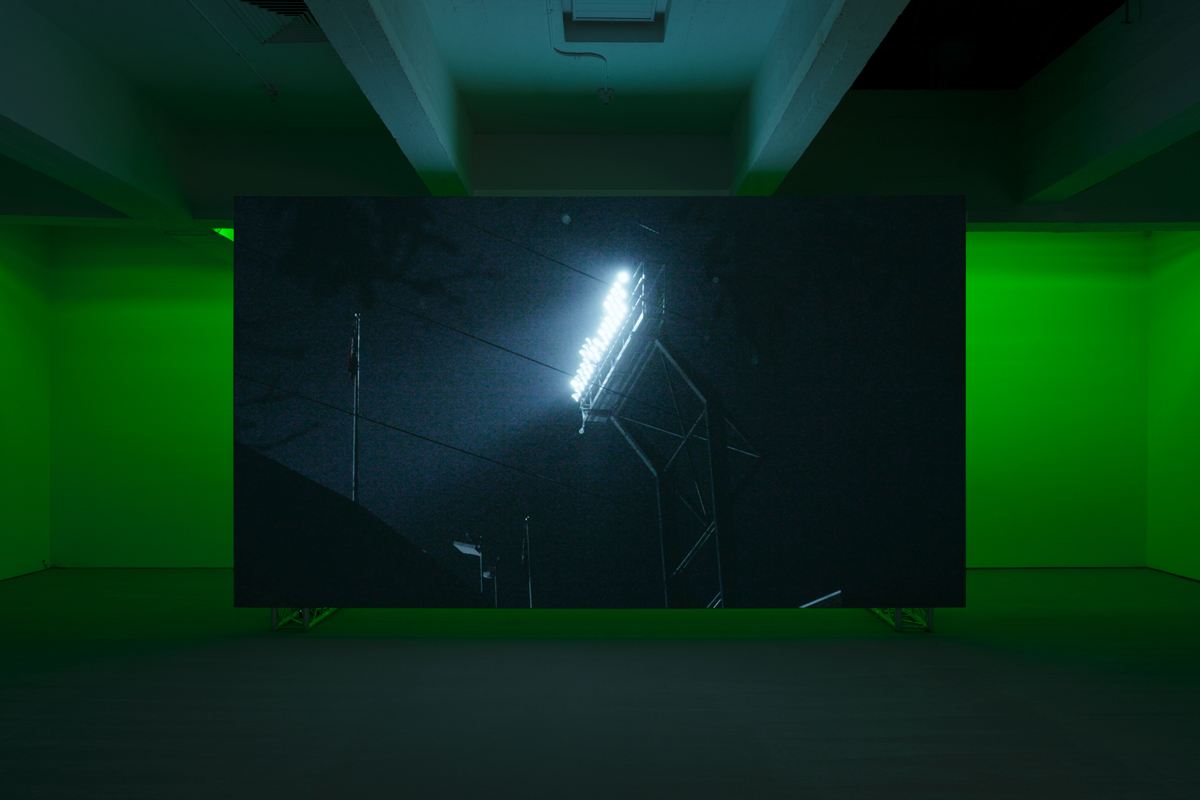 As the mise-en-scène changes, so do the synced lights haloing out from behind the screen. In effect, they extend the “footprint” of screen/stadium, imbuing the gallery’s peripheral walls and corners with an alternating translucent glow of red, green, or a rather icy blue. (RGB is the standardized and ubiquitous color model for electronic image display today, originally based on the trichromatic theory of human perception.) As one among those reassured by the actuality of apparatuses, I am prone to circumnavigate video installations. Are monitors curved or flat, LED or liquid crystal? Power cords—are they a tangle, discreetly bundled, altogether hidden? What of the placement of projectors and their distance from the screen, and from screen to wall? On this last consideration, Pfeiffer is more generous than most. There’s a good ten feet behind the large-format display, such that the mechanics of the lighting and supporting trusses are fully visible. This “negative” space between the substrate for the surface play of light onscreen and the existing architecture is not only a divergence from the singularly frontal and unidirectional orientation of conventional black box theaters but also a choice vantage point from which to observe other onlookers looking. What potential might there be, if only for a time, in sharing this particular Chelsea “ritual”? What group identity, if any, can we assume as a collective viewership?

But wait, the ponytailed blonde is not a coach. Her presence, captured and cropped from behind or in profile, has been steadily recurring and, in a sense, grounding. Select moments on the audio track would have us privy to her crucial role in the technologically enhanced and orchestrated presentation of the football game. “He’s got the sepia lens on,” she observes in one exchange, and “knock out jersey mics,” she concurs with her crew in another. Along with the music the sound mix includes snippets of play-by-play (“Hartman on the return,” “first and ten for the dogs”), but more predominant have been directives such as hers, which signal the machinations in putting on a show, seamlessly and with commercial sponsorship to boot: “Switch, switch . . .” “Let’s go to . . .” or “all the lights, all the lights, hold it up . . .” and “I think we’re doing State Farm . . .”

Editing choices highlighting this otherwise invisible labor of technological facilitation and, perhaps by implication, crowd control have been there all along, and their cumulative impact has crept up gradually but unmistakably. When, for example, a young tubist covered in sweat plays, stops, then exults, his jubilance seems all too automatic. Or when brown athletic legs start bobbing to the beat despite being padded, braced, and soon occluded by other legs in khakis, it becomes impossible to unsee how team spirit is both embodied and scripted. Indeed, there is a program, a playlist, as the many skillful edits have established. In perhaps another provocative nod, Pfeiffer extends the mirroring between sports arena and gallery to one between athletic spectacles and artistic propositions as well, reminding us that they too entail direction and facilitation. Toward what end, team RGB?

Sometimes the Redcoats are far across the field but in crisp focus, while players in the immediate foreground are a blur. Then vice versa. It might have been one such instance of oscillation forth and back that triggered a strange sensation, not exactly out of body and not exactly in. And an unsettling thought: what if someone or something else is also looking and seeing, listening and hearing. Both within and without, amid and alongside, but ultimately independent of us. An omnipresence with its own appetites and volition that we have not yet come to terms with. It was a fleeting sensation, and I told you it was strange. But what if? Cue volume here.

Sowon Kwon is an artist and teacher based in New York City. A member of ACT-UAW Local 7902 (@act_uaw7902), she stands in solidarity with and gratitude for the union in their current negotiation of a fair contract on behalf of part-time faculty at the New School.