In the artist’s work, clay sojourners and a shared history. 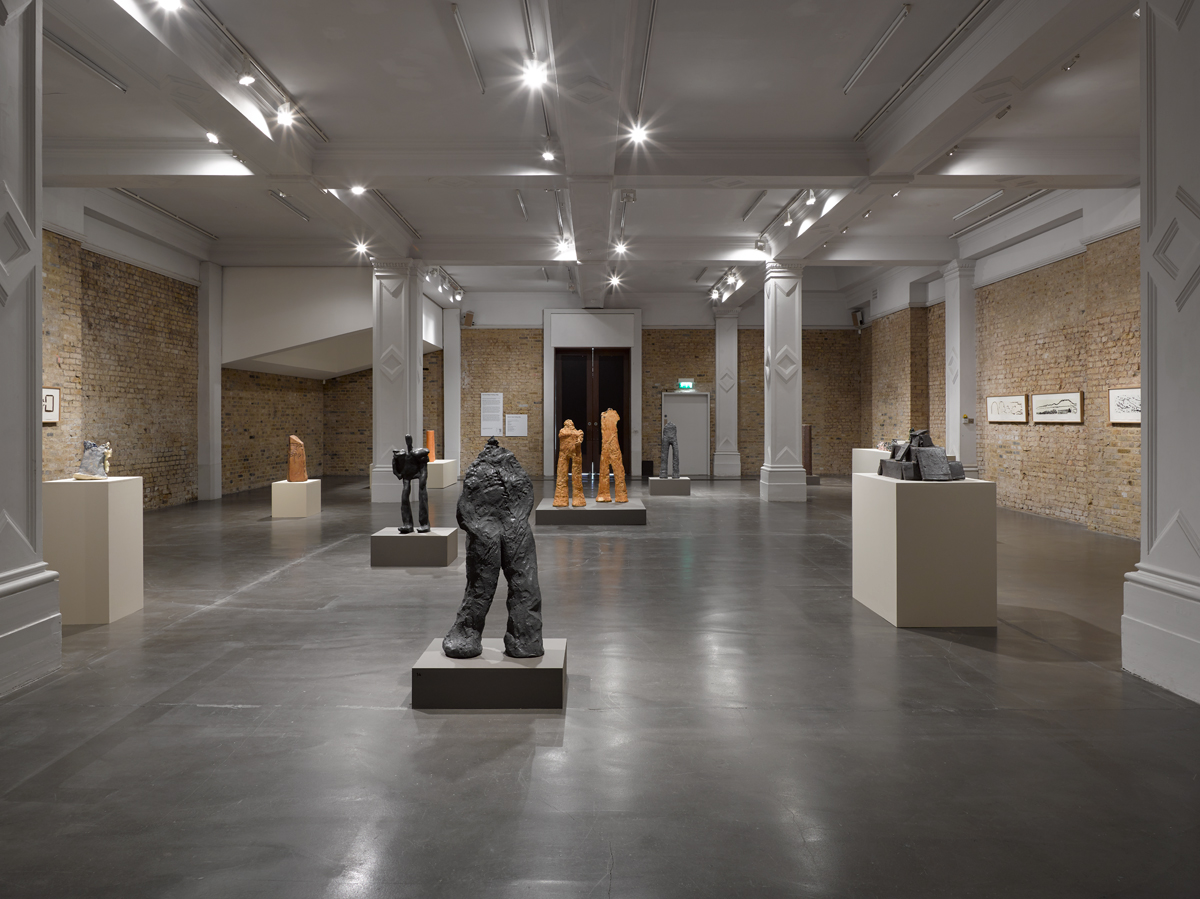 “In every mythology, man was created from earth,” Simone Fattal has observed. “Earth is the most alive, the most spontaneous medium; you create your sculpture with your hands. I barely use any tools. Earth brought a human element to my work.” Human, perhaps, as in evidence of fingers pocked and pitted into clay, soft material kneaded, pinched, pulled, shaped, dragged upward from the ground to be vertical, to live with gravity. Or human as in the shape of man, a person—or almost—sometimes just legs, maybe a torso too, no head or arms, still standing nevertheless, solid and recognizable. “Ceramics is the domain of infinite knowledge,” said the late, great Etel Adnan, Fattal’s partner in life and art for decades. The wager of this existential matter? That it knows things we do not—things ancient and modern, the primordial shapes and materials of the world before forms and concepts became rigid. Can it tell us, as Fattal hints, what to do with it? “The clay as a living being is a relationship,” she avers. “We work together.” 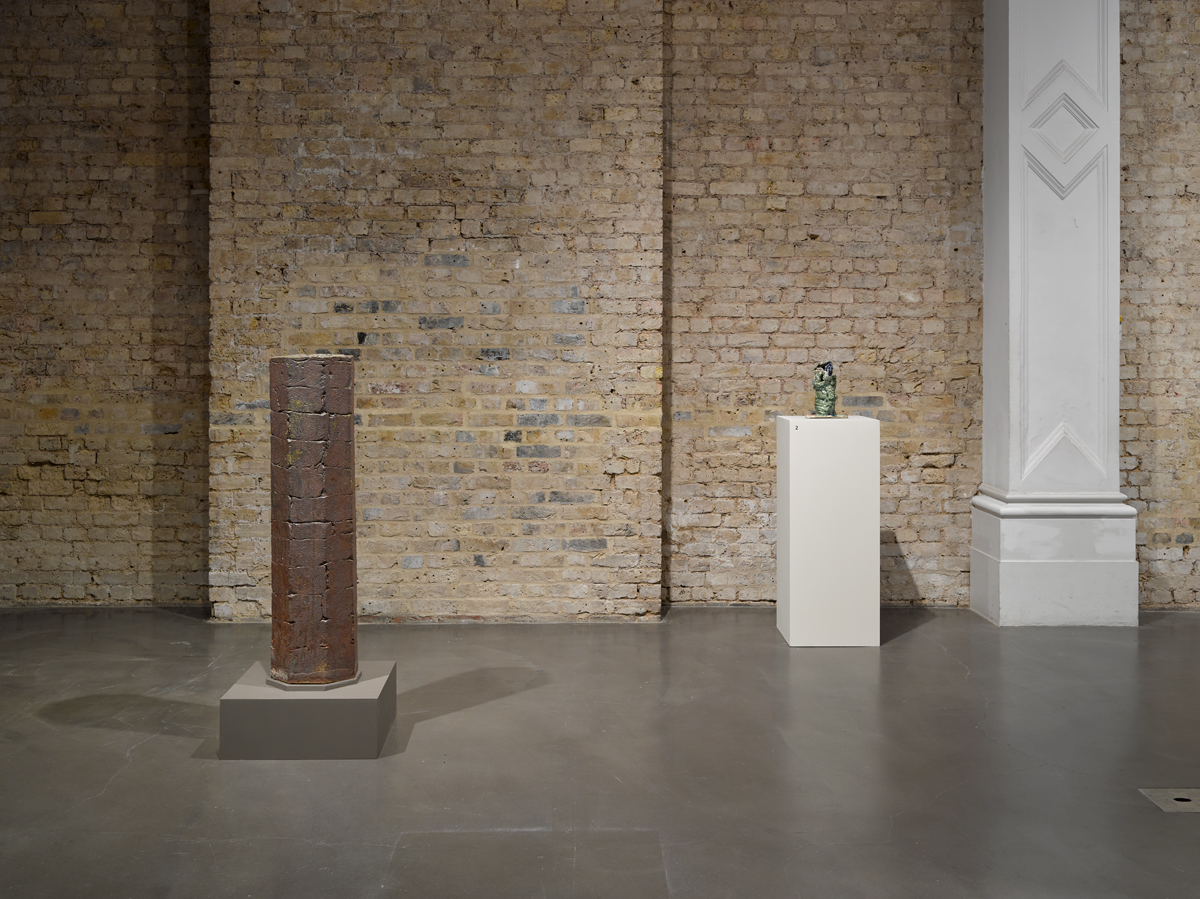 Finding a Way—her exhibition now on view at the Whitechapel Gallery—contains stoneware sculptures, etchings, and one bronze, the majority of which were made by Fattal in the past three years. The show is filled with amorphous but apprehensible forms that hover joyfully between representation and abstraction: half- and three-quarters people with truncated bodies, legs thick and straight, like those of elephants or some other rough creature. The central space of the brick-lined room, envisioned by the artist to be a “giant kiln,” is punctuated by five sojourners on low platforms: Walking Man IV, II, III, and I (all 2021), in order of appearance. Amid them is the sole bronze—and the most “complete” figure—in the show, The Master (2021). Around these lumbering characters, as though they have been collectively summoned by the walking men, are other approximations of shapes and structures: trees, a ziggurat, a centaur, an angel, stelae, a gathering of clouds. Clouds! Imagine the courage to make from clay the airiest and most insubstantial of things—to pluck from the sky, fire, and preserve them, roiling and curvaceous in rich glazes of blue, pink, white, teal, ecru. They sit quietly in a row, Cloud (5, 9, 1, 7, 2) (all 2021), as if clouds could appear anywhere, and do. 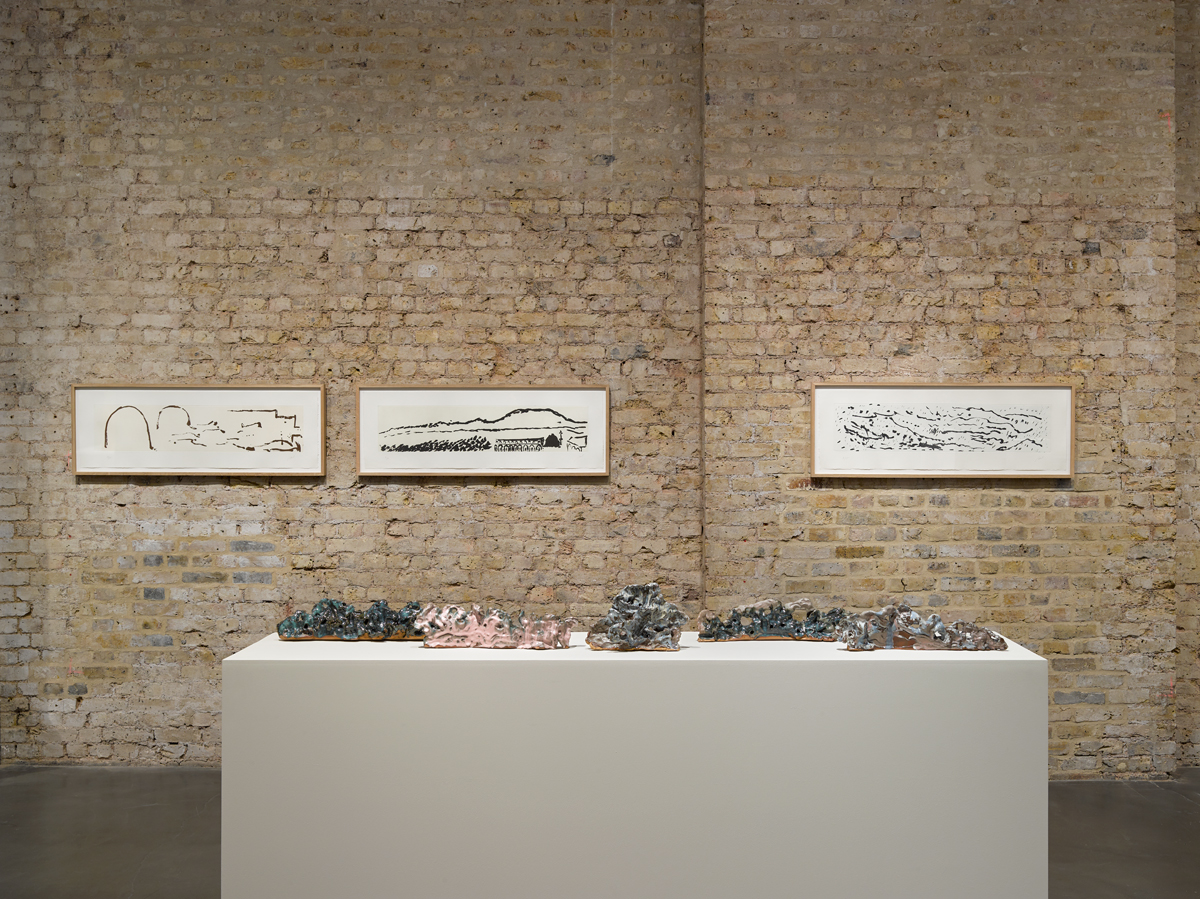 Each sculpture seems somehow in transit, like it has just arrived in its simple, unembellished state, its maker’s hands visible everywhere; like she could almost be there holding or still making it. Or perhaps the works are about to take leave, preserved here in clay for us to see fleetingly on their way to somewhere else. Fattal refers to her walking men as “archetypes,” those lost and gone, the dead returned, the living still fighting their daily battles big and small, violent and existential. “They access the ideal,” she says, and act as a means to “reconnect the present with the ever-present past.” These men with their sometimes-partial forms repeat through her oeuvre, often given names of ancient beings, deities, voyagers from across cultures—Adam, Ulysses, Ishtar, Enkidu, Balkis, Gilgamesh—each looking for, or perhaps endlessly evaded by, something. 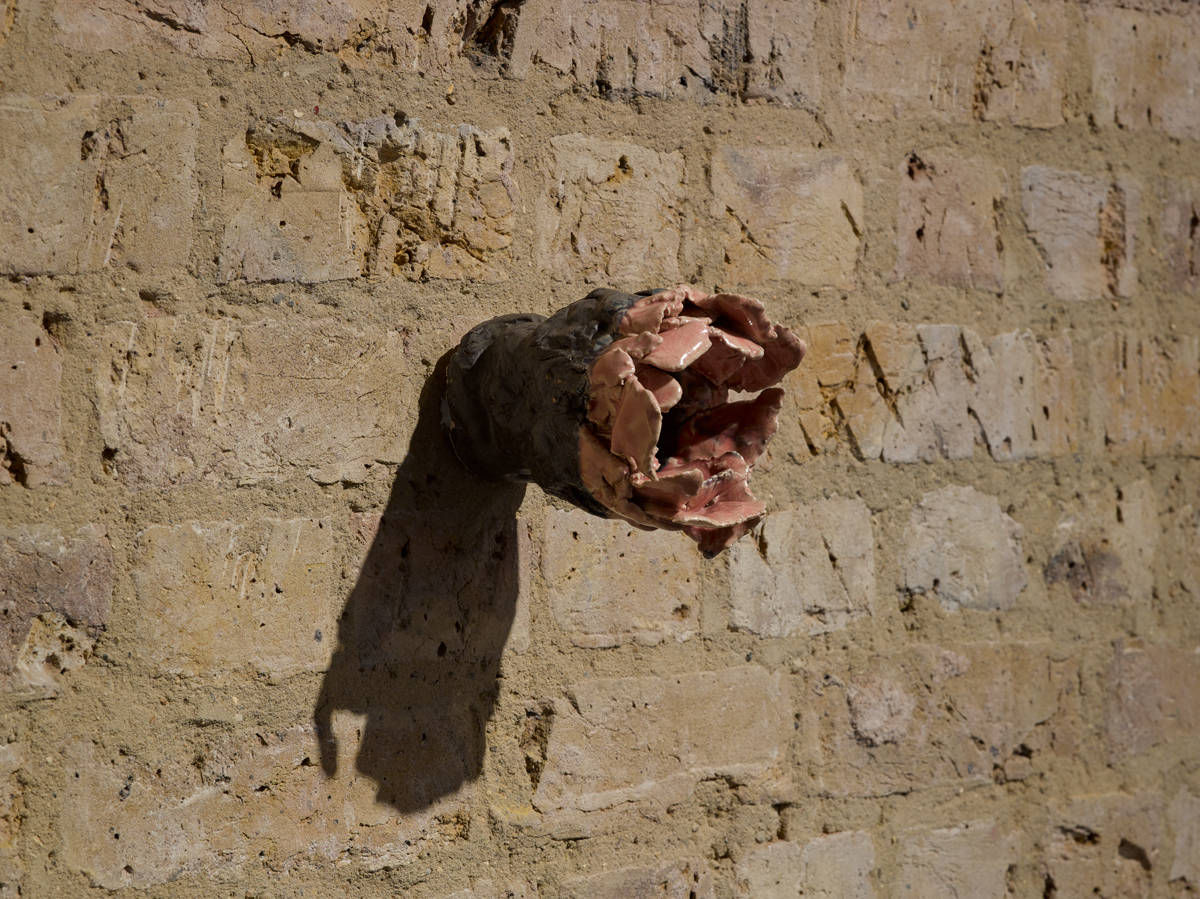 At the Whitechapel, the walking men proceed toward the back wall of the gallery, on which is fastened Flower (2021), its pale pink petals extending straight out into the room, like a jagged, desirous claw. A flower, Fattal says, “is the ultimate object Gilgamesh finds on his search for immortality. He sees the flower, but it vanishes before he is able to touch it. In the Koran it is also said that when the skies burst open on the day of judgment, they will become a red flower.” And yet the walking men, fixed on their clay legs, will never arrive at this blossom. Even if they did, they would have no arms to reach out, no hands to touch. I long, I may not have. 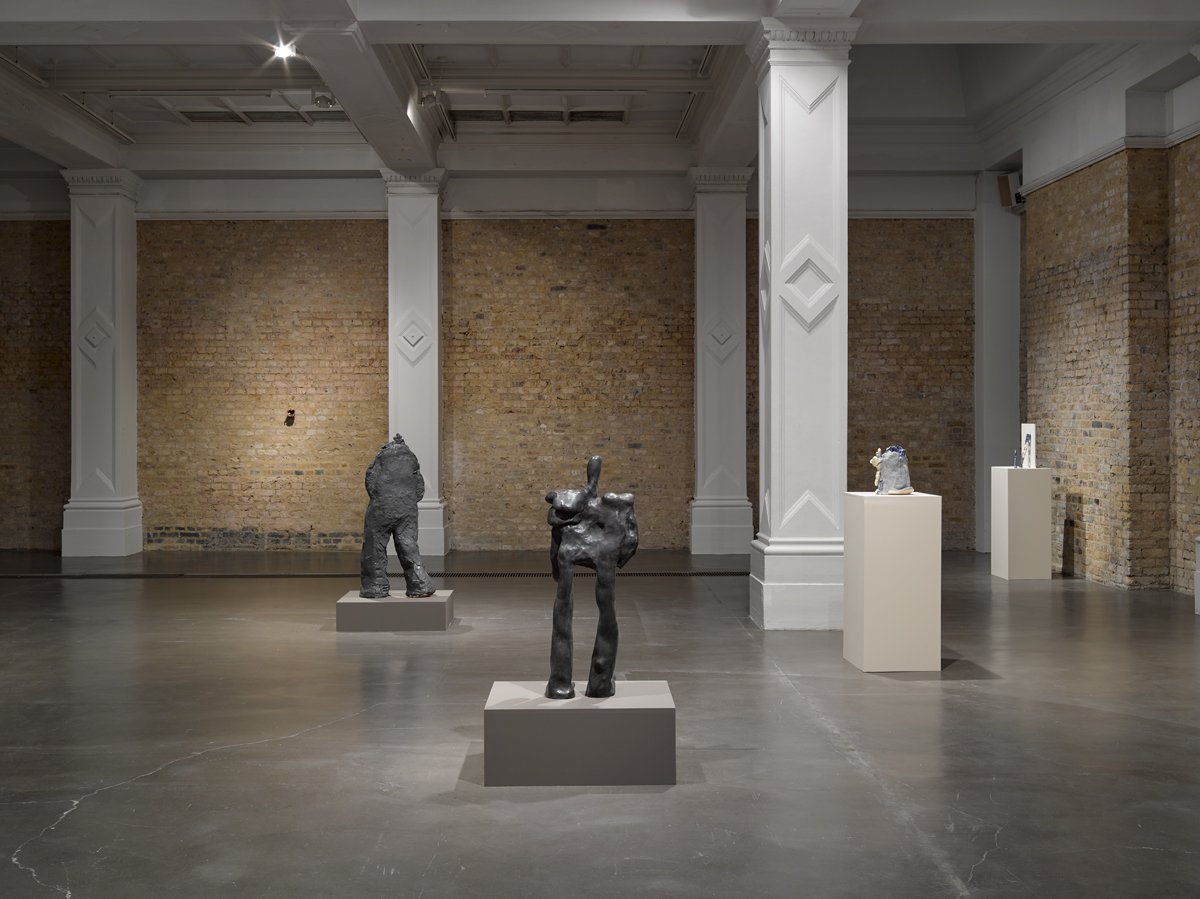 “But, you know, a work of art is never just about one thing,” observes Fattal. Nor is a life, or a practice. The artist’s sculptures are as much of the art historical as the archaeological—one might see in her walking men shades of Dubuffet, Brancusi, Giacometti; or shades of ancient artefacts. Equally, it is possible to glimpse references to Sumerian and Assyrian mythologies, Sufi philosophy and poetry. In Angel with Shield (2021), we see just an example of Fattal’s aesthetic polymorphism: a slight white figure with an arm raised and a round object fastened to his chest emerges from a cerulean-glazed vase with deep-blue insides. Or has the sky curled around into a kind of vortex? Does the angel head into battle (Saint Michael?), or has he just returned? Does he (or she!) exist outside of a particular faith, “predate monotheistic religions,” as Fattal has observed of angels? Perhaps it is Walter Benjamin’s “Angelus Novus,” the angel of history who is propelled into the future with his face turned toward the past.

In Fattal’s work, history exerts force in both directions, it is a continuous movement, a telescoping. The artist herself has moved through countries, cultures, conflicts: she was born in Damascus, studied in Paris, worked in Beirut, lived in exile in San Francisco, then went back to Paris, where she remains for now. There is the sense of a shared history buried in her forms, which are at once individual and ubiquitous. Might we see ourselves in them, consider that we are made of the same shared world, made of the same substance, as the first man was of clay? “Things pile up,” she says, “they don’t replace each other. It’s not either-or, it’s one plus one plus one, and it gives you what they call experience, or knowledge.”

On the walls of Finding a Way are six copperplate prints (all 2020) that reconstruct Damascus according to Fattal’s memory: the souk, Hamidiyé; mount Qasioun; Vers les Omeyyades (“Toward the Omeyyades,” the great mosque of the city); two views along the river Barada. The walking men are flanked by these memorious landscapes with their broad black lines and fluid strokes, finding their way, as we all do. Life is not static, it moves and transforms—like clay, like yearning, like clouds, flowers, love. “That’s why you can think you have had many lives: you die and come back, die and come back,” says Fattal. “Well—hopefully!” Fragments striding into infinity, we may feel we are getting nowhere, but we are, at least, carrying on, which is a version of finding a way, after all. Hopefully!

Emily LaBarge is a writer based in London. She has written for Artforum, Bookforum, the White Review, Granta, and the Paris Review, among other publications. She is the London correspondent for the Montreal-based quarterly esse arts + opinions.