In his latest, Clint Eastwood heads into Mexico on a kidnapping mission. 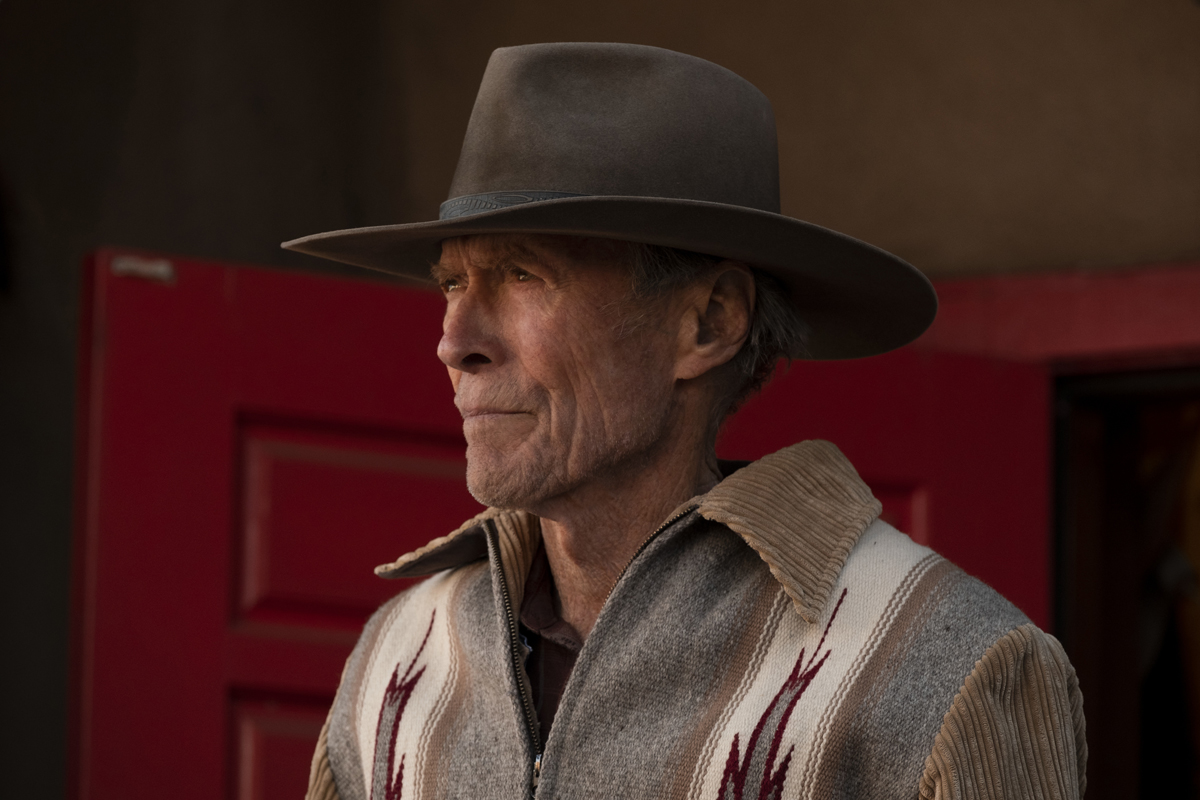 Cry Macho, directed by Clint Eastwood, now in theaters and
on HBO Max

Cry Macho is the 756th feature directed by Clinton Eastwood Jr., the last American studio filmmaker still on the job to have lived through the Lindy Hop and Herbert Hoover, a man who, in his West Coast boyhood, perhaps helped a bent veteran of the Battle of Vicksburg to cross the street. Eastwood’s latest is a sweetly shuffling piece of work, nothing to stand shoulder to shoulder with the most affecting films that he’s recently directed (2019’s Richard Jewell), or the most lacerating (2014’s American Sniper), but a human movie—awkwardly courteous, sometimes blundering, always tenderhearted. No fuel dumped onto the Culture War fires this time around, just a succession of scenes like chicken-scratch jottings scattered across crumpled scraps of paper, a few more moving than they have any right to be. 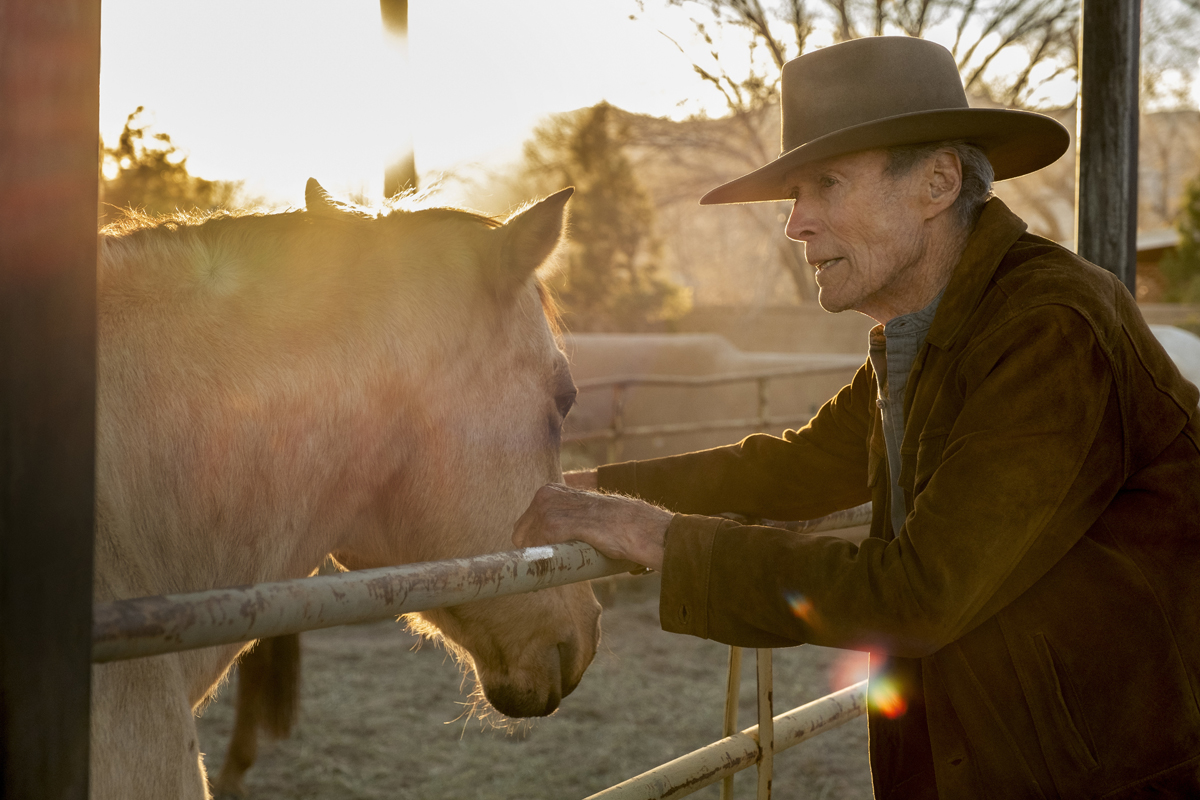 Eastwood, cutting the figure of a rusty, dilapidated tin shed, stars as Mike Milo, a hotshot broncobuster of yesteryear, long busted. The movie’s efficient opening lays out the essentials of Milo’s (low)life story, mostly during a dressing down that he absorbs in the course of being canned from a longtime ranch-hand gig by his boss, Howard (Dwight Yoakam), a scene capped by Milo’s curt “take this job and shove it” kiss-off. Milo’s glory days ended when he got himself sat on by a horse; the years since have been spent tending ponies by day and drinking away the nights, habitual dipsomania represented by a single shot of Milo sitting outdoors by his lonesome, Eastwood’s silhouette outlined against a dusk-lit desert sky as the setting sun shines wanly through his tumbler of whiskey. 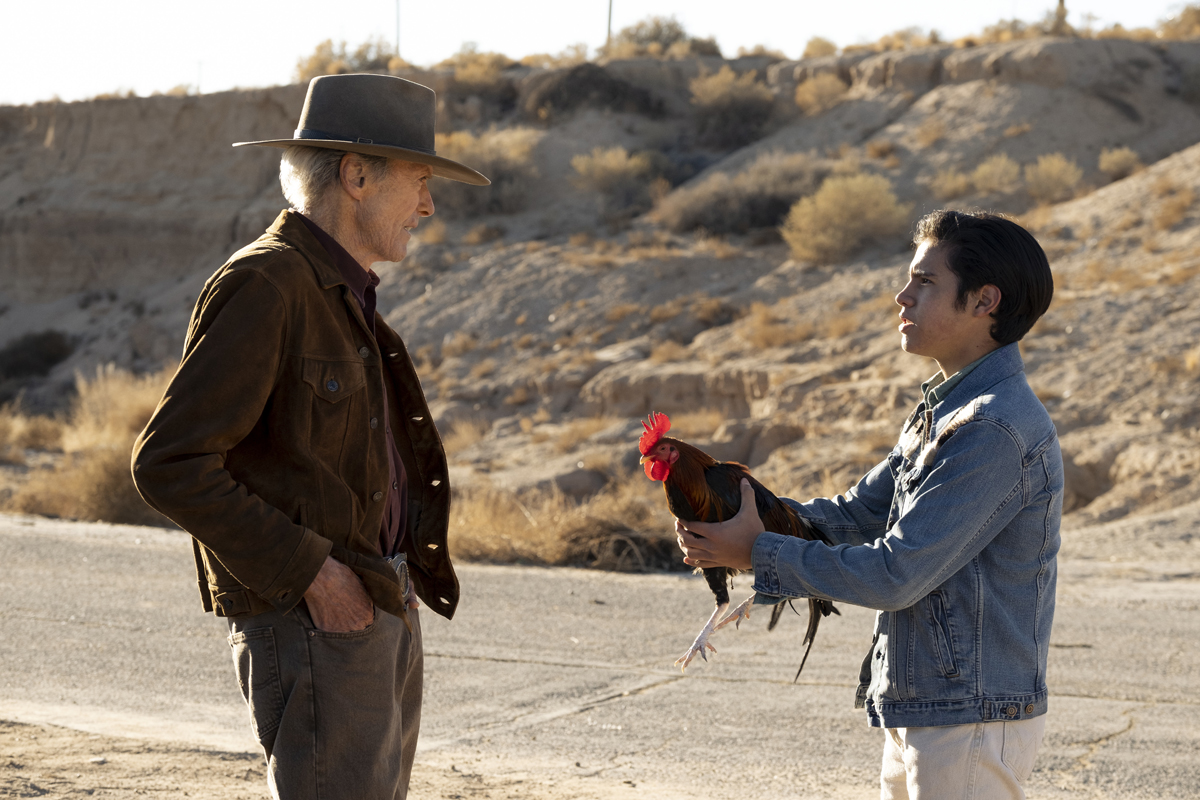 As in all of the late Eastwood films in which Clint also performs, life just won’t leave this slumbering ancient alone. Howard resurfaces to recruit the desiccated Milo to travel to Mexico to abduct his thirteen-year-old son, Rafo (Eduardo Minett), product of a brief fling with a sharp-clawed, mobbed-up socialite harpy (Fernanda Urrejola), and then deliver the boy to the US border to be reunited with his dad, ostensibly for sentimental reasons. The northbound journey back to Texas taken by Milo, Rafo, and the kid’s cockfighting rooster, Macho, with Momma’s henchmen in hot pursuit, make up the bulk of the movie, shot on location in New Mexico, which plays both the Estados Unidos and Old Mexico. When the action moves south of the Rio Grande, Eastwood and his new cinematographer Ben Davis don’t go in for the clichéd burnished-gold tint, giving us instead Mexican villages as strikingly unpicturesque as the banal American off-ramp sprawl in recent Eastwood. Milo, who favors sleeping under the stars without a building in sight, at one point voices his contempt for dirty city air, and the contrast between how Eastwood shoots town and country leaves little room for mystery regarding the filmmaker’s own feelings.

One might note that recruiting a man in deep decrepitude for an arduous kidnapping mission doesn’t make a jot of sense, but Milo, whose top pace is an unsteady ramble, makes up for what he lacks in speed with flinty shrewdness and cussed determination, qualities that also apply to Eastwood’s direction. The original screenplay for Cry Macho, by the late N. Richard Nash, dates to the early ’70s—the film is set in 1978–79—and it had been considered in the ’80s by Eastwood, who eventually passed it on to Robert Mitchum, only in his mid-thirties when he played the part of a dinged-up rodeo champ to perfection in Nicholas Ray’s The Lusty Men (1952). Mitchum was done striving for greatness by then, a laziness that is part of his charm, while Eastwood has never stopped striving, a pushiness that is part of his. A young actor can more convincingly perform exhaustion than an old actor can vitality, but I can’t say the struggle isn’t compelling. 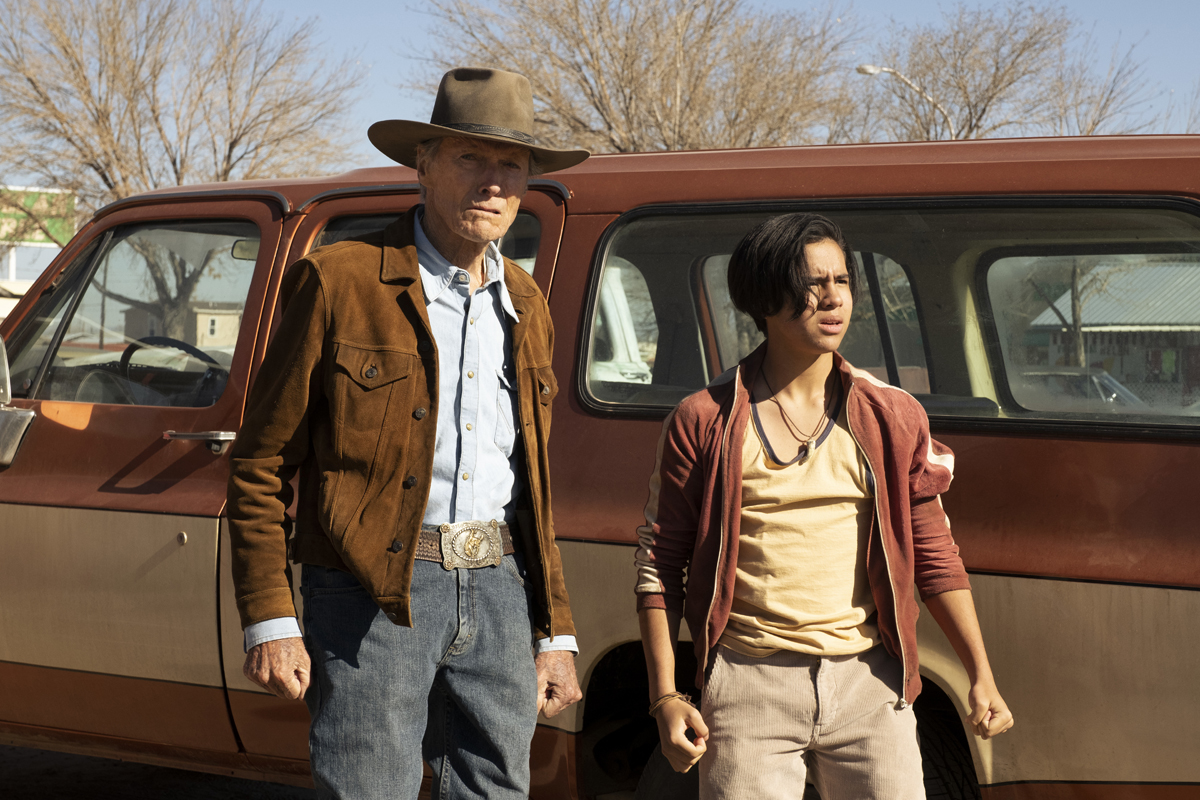 Returning to Cry Macho thirty-plus years on, Eastwood is singing his Greatest Hits in a wavering voice. The director-star’s dialogue with Macho, the cockscombed creature he is often found distractedly fondling, recalls that with animal familiars of yore: Clyde the orangutan in Every Which Way but Loose (1978) and Any Which Way You Can (1980), or mutt “Meathead” in Sudden Impact (1983). His grudging, tender mentorship of a young, non-white immigrant to the United States brings to mind 2008’s Gran Torino, whose screenwriter, Nick Schenk, also credited with 2018’s The Mule, put some kind of polish on Nash’s Cry Macho script. And then there’s Eastwood’s ongoing repudiation of hard-charging machismo, evidenced here in Milo’s charming domestic doddering while romancing Marta (Natalia Traven), a widowed restaurateur (“Cowboys always cook. It’s kind of our deal.”)—scenes not unreminiscent of The Bridges of Madison County (1995)—as well as in some explicit speechifying. 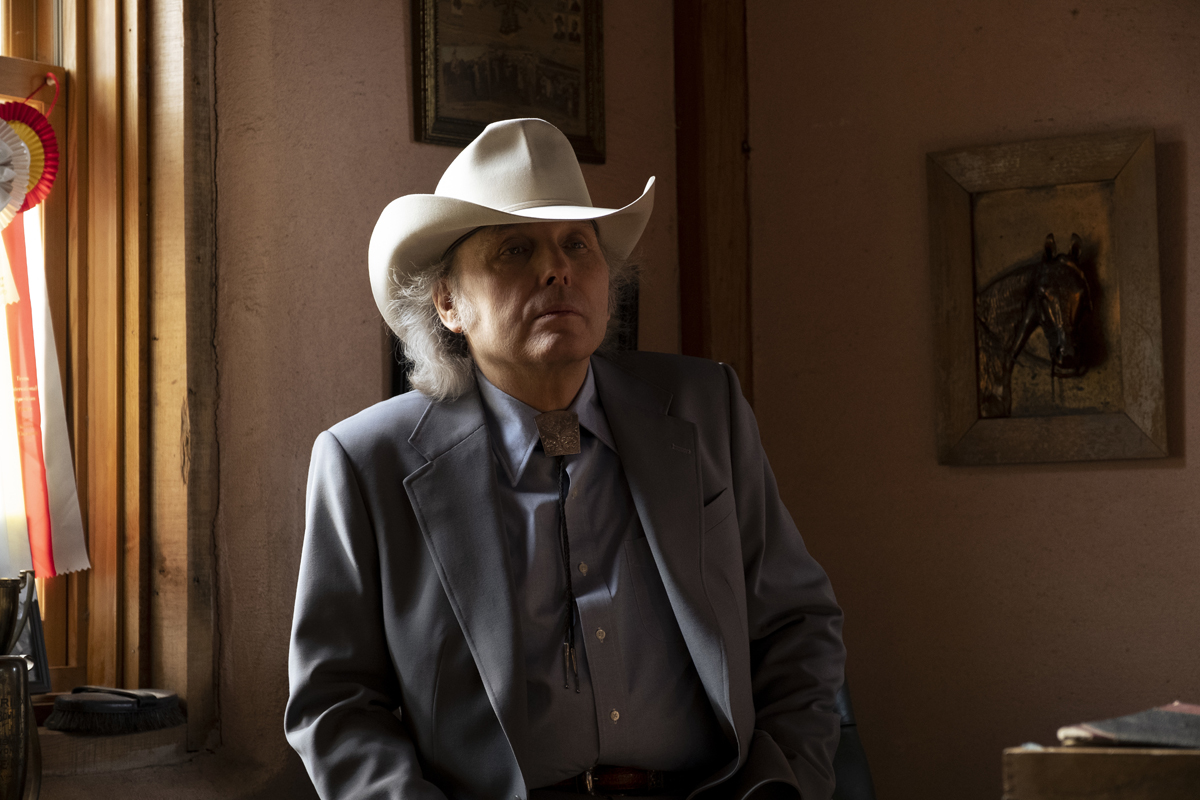 Any theme introduced once in Cry Macho will subsequently be signed in elaborate triplicate. Performances are pitched in varied, clashing registers. Yoakam, who has aged worse than Eastwood in a fraction of the time, has a rushed, whingy delivery—his exchanges with Milo start to make sense if you think about them as dialogues between a cranked-up pill-popper and a tired old drunk. After watching Chilean actress Urrejola’s florid turn as Rafo’s black-hearted bitch of a mother, it was no great surprise to discover that she is a graduate of the telenovela school of performance. (No knock, mind you—this is a tradition as rich as Kabuki.) Playing an abused, delinquent latchkey kid who keeps insisting that he doesn’t trust anybody, Minett can’t brood away his air of puppyish eagerness; when he tries to dial up damage and danger, he just looks like a young, out-of-his depth television actor, desperate to please. 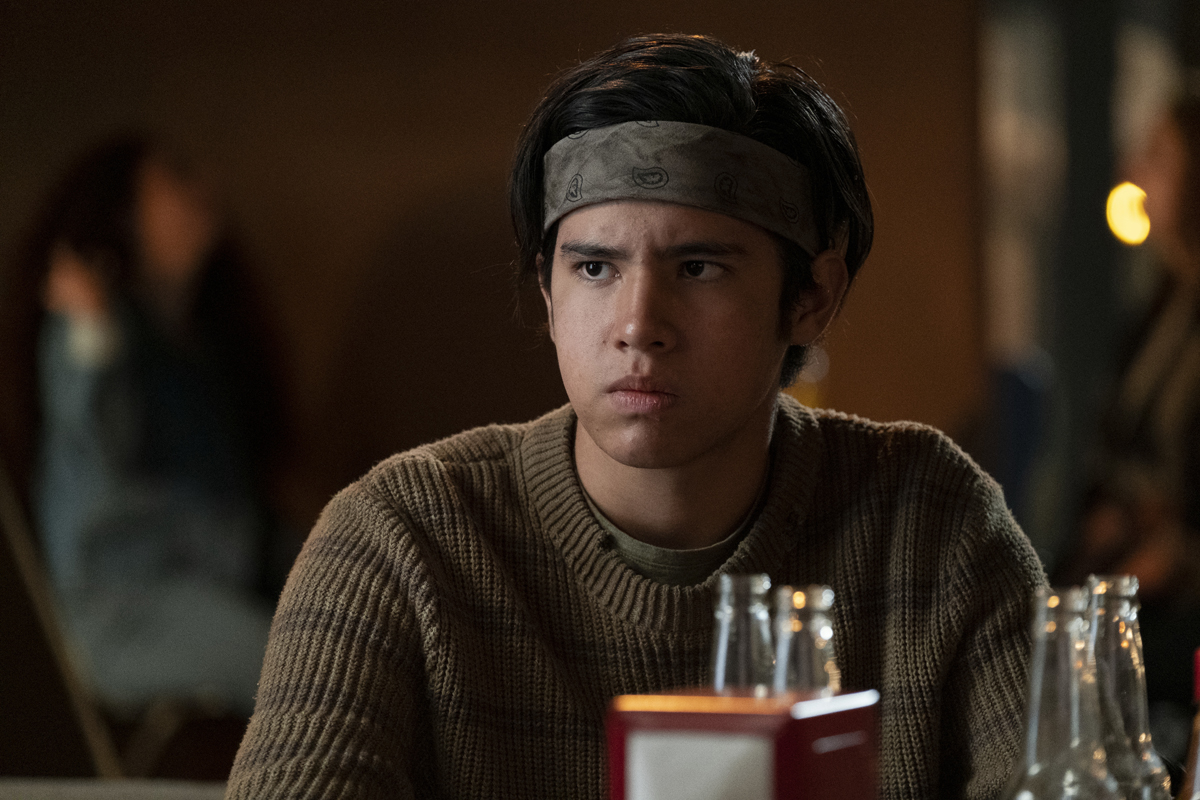 One might chalk up this “messiness” to the director’s diminished capacity to establish and vigilantly maintain tonal consistency on his set. But Eastwood’s recent output has included both the irreproachably professional actor’s showcase Richard Jewell and the high-wire act docufiction whatsit The 15:17 to Paris (2018)—both transfixing films, both doing very different things with performance. Rather than a loss of focus, Cry Macho feels like an old actor amusing himself in playing stony scene partner to variously voluble, scrabbling costars. The rule established in that first scene with Yoakam stands throughout: he who talks least, talks best.

Eastwood became a bona fide celebrity after his ingenue days were over by playing a tight-lipped mercenary/sentry type in Sergio Leone’s 1964 A Fistful of Dollars. Leone was a once-in-a-generation visionary, the child of a moviemaking family who knew in his blood things about the medium few others will ever begin to guess. Eastwood, an aging himbo, got a lucky break. But he was a curious, disciplined, frugal man, and once he’d been fit with a bankable star persona, he couldn’t stop playing around with it in the mirror, which is what he’s still doing on-screen today. 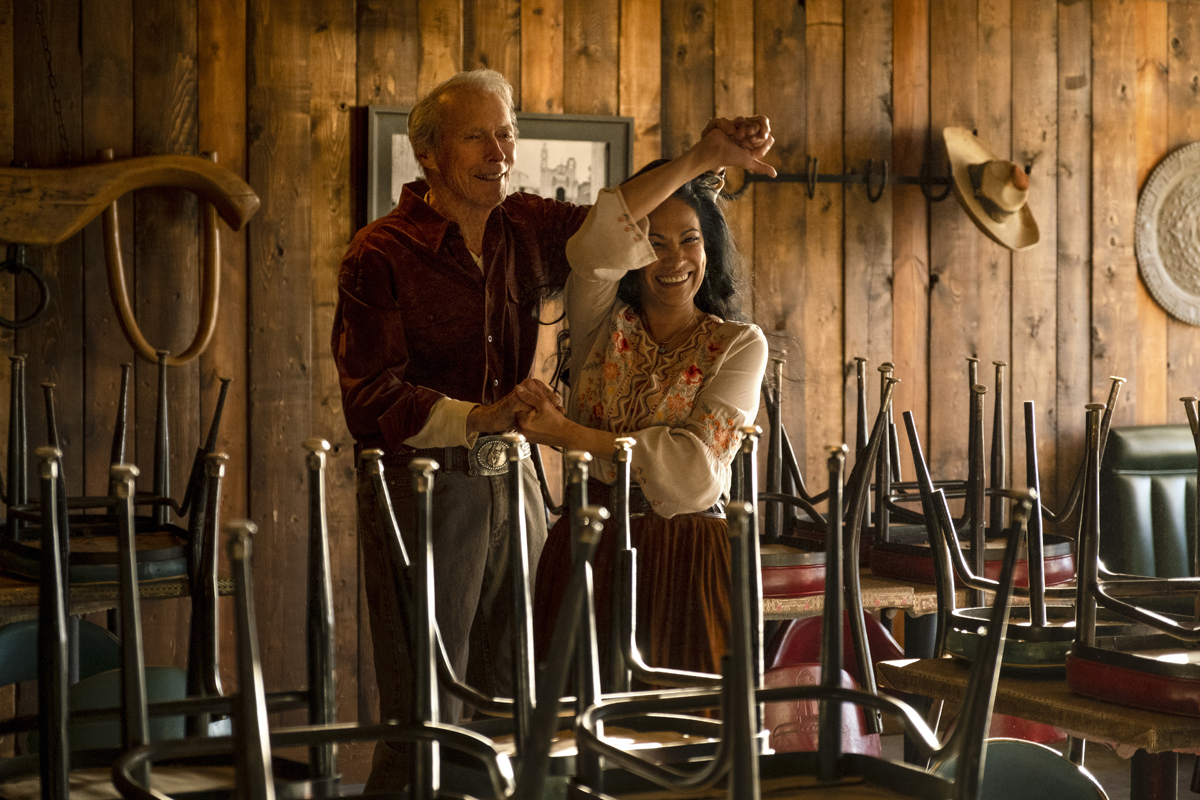 Eastwood’s appeal in his Leone movies was grounded in a grim, wary taciturnity, and the limitations of language are at the heart of Cry Macho’s best bits: Milo giving an extensive, ornery cussing to a pair of uncomprehending federales, or his courtship of abovementioned cantina owner Marta, who speaks no English, though this is no obstacle in his playing house with her and her granddaughters, one of them deaf—scenes in which much is communicated without words, just through futzing with a tortilla press. Cry Macho has its share of unwieldy line readings, easily transcribed by anyone interested in evincing its trundling, horse-and-buggy clunkiness. But any worthwhile movie is more than a script, and much of what Eastwood has to express here is between the lines. Enjoy the silence.