Visual Art
The World Is Sound 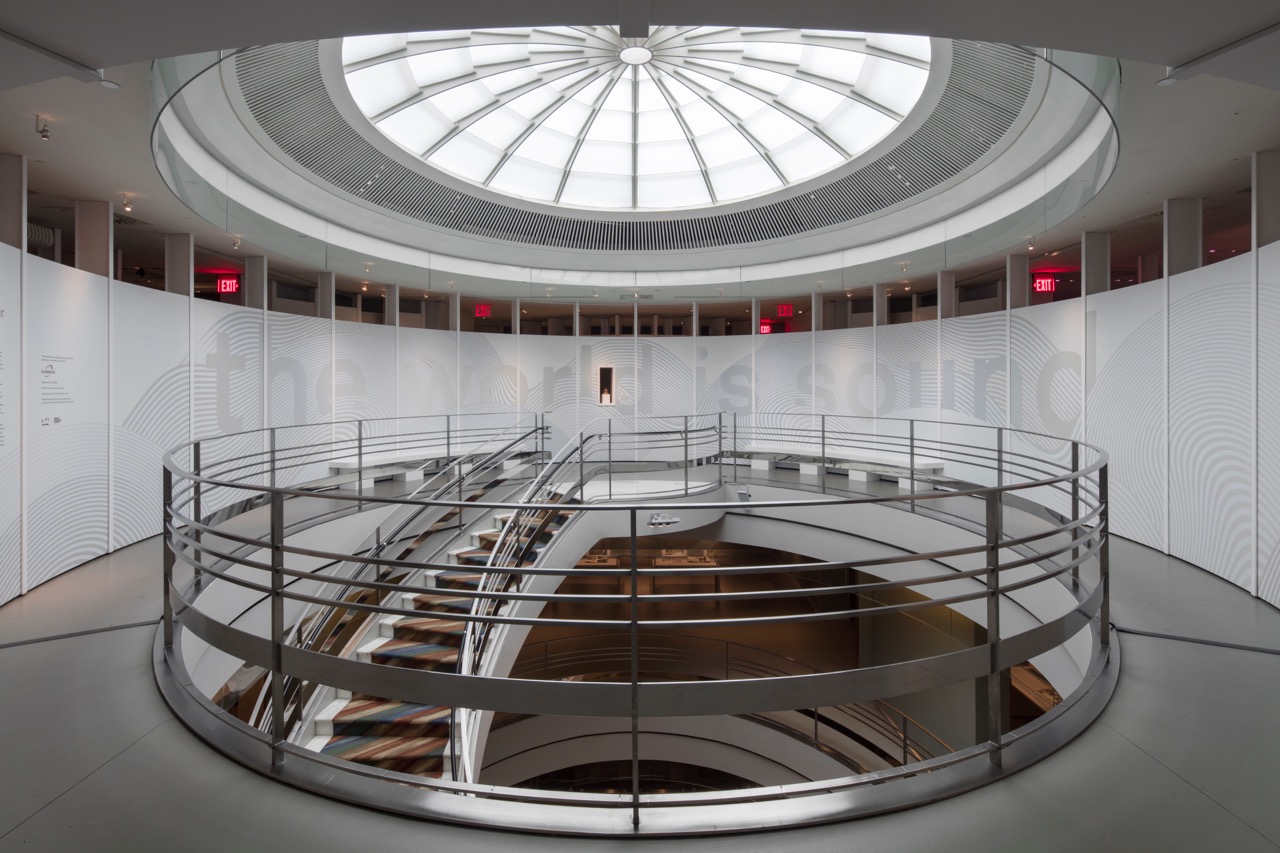 The Rubin Museum’s The World Is Sound offers something alluring: an escape from incessant distractions, and even a route to an intensified, blissful brand of awareness, through listening. The exhibition—which has a balance of Buddhist artworks and ritual objects, dating between the eleventh and twentieth centuries, contemporary art, and new commissioned sound works—invites you to listen deeply, as deeply as a chanting monk. You can trade your hi-fi-and-narcotic-enabled trance for a form of listening that works more like a practice—like meditation—and frees you from the realm of illusion.

In a museum context, what the curator describes as “the transcendence of desire and the self” often has a lot to do with A/V setup. The World Is Sound features high-caliber speakers, custom acoustic panels, and other technical contrivances, which facilitate a kind of listening that is increasingly rare, given the mobility of media and the prevalence of earbuds. 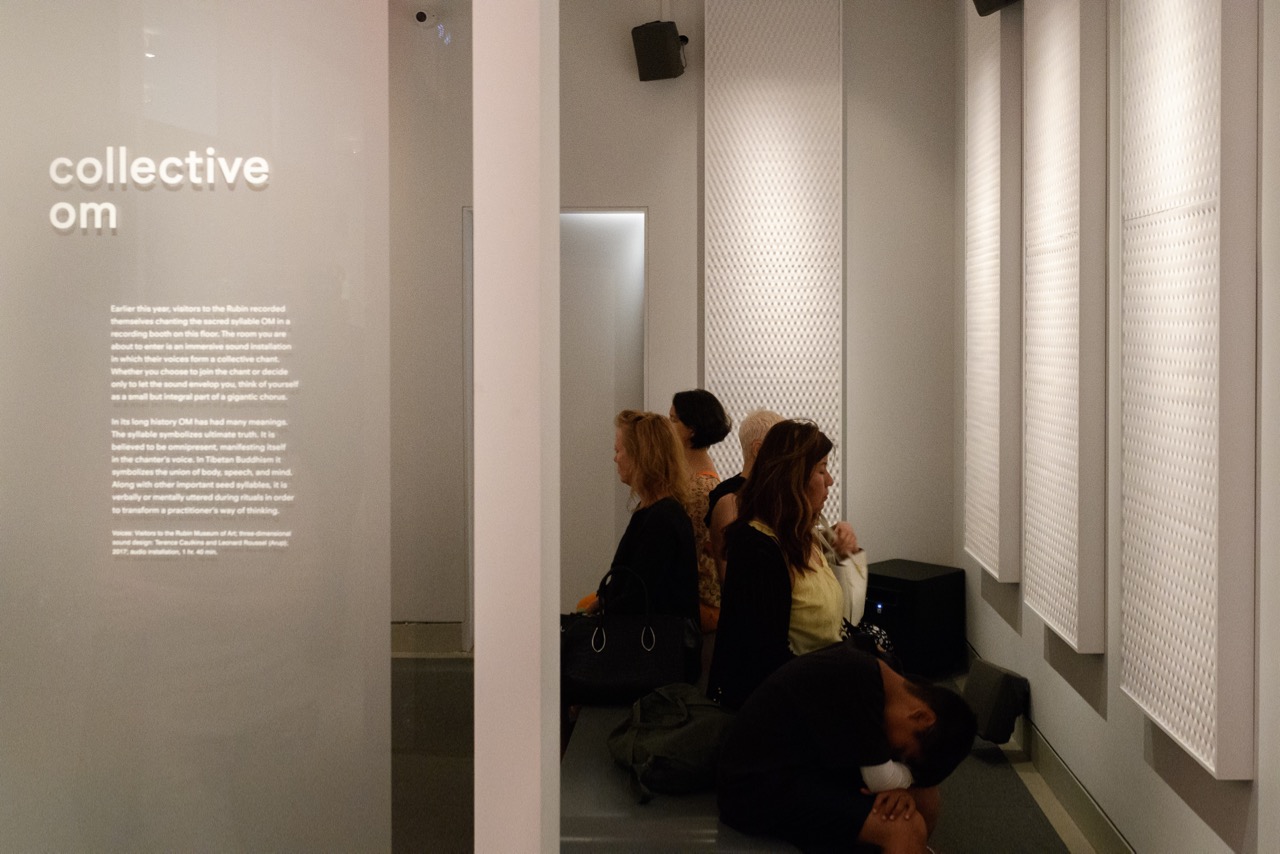 But Collective OM, the work that most completely cocoons the listener, curtailing the urge to do anything but listen, is also the most deflating. The installation was created by engineers at Arup from recordings of visitors chanting “om” at the Rubin earlier this year. Mellifluous voices fill a glass-enclosed room, which is stocked with plush ergonomic seating and superb speakers. The recordings have been refined and merged; individual voices seamlessly join and depart from the undulating chorus. After a minute of blissful surrender, however, I felt like I was participating in an experiment in crowd-sourcing communion. I wondered: What does my listening experience have to do with their (technologically mediated) chanting experience? 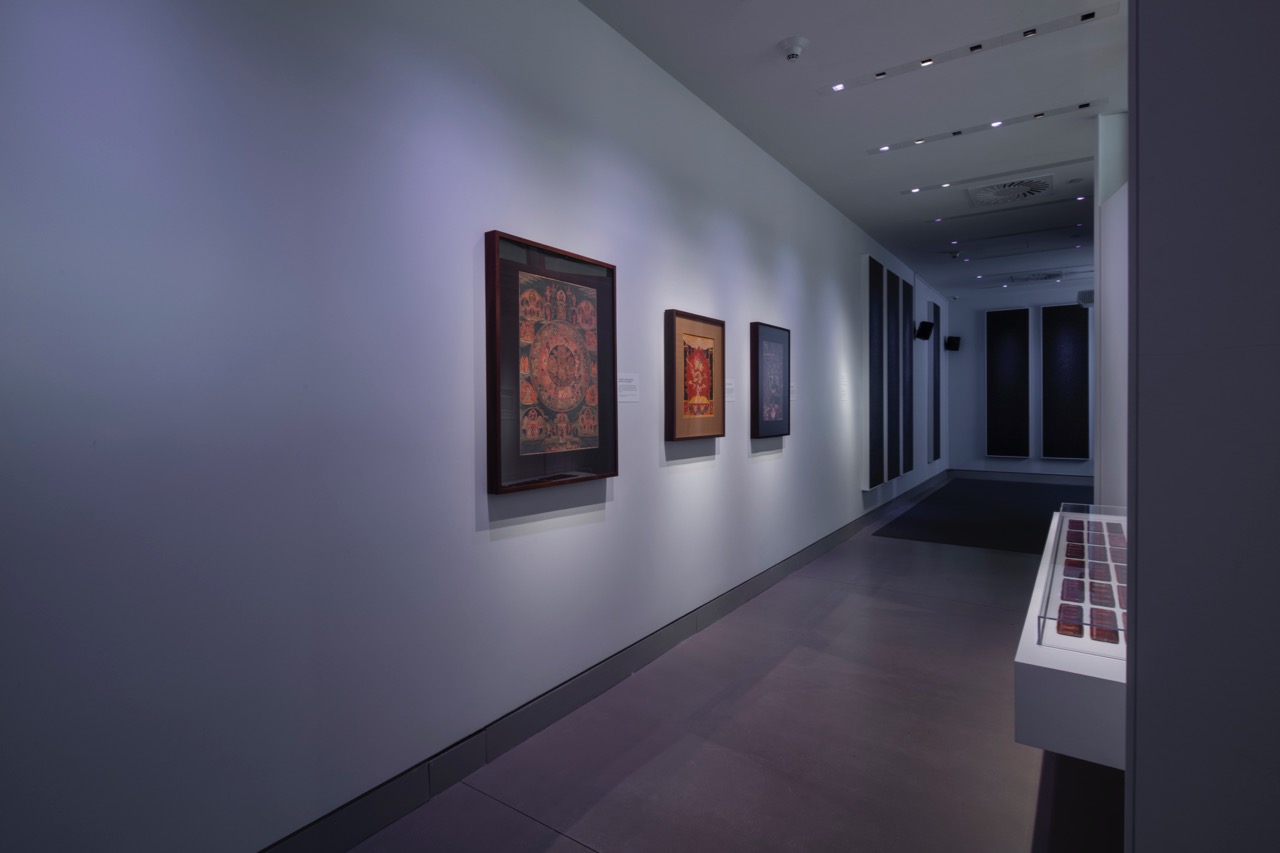 Much of the exhibition skirts this question and turns on the historic relationship between Buddhist art and music and chanting. Sound was essential to the remarkable Buddhist paintings, manuscripts, instruments, and statuary on display, created mostly in Tibet. Paintings like the sixteenth-century Mandala of Manjushri Dharmadhatu Vagishvara (Melodious Voice)—a composition of concentric geometric figures populated by manifestations of the buddha Manjushri—were devotional aides for worshippers, kept in temples and animated by prayer, drumming, horn-blowing. The paintings are paired with contemporary recordings of monks chanting and playing music, which lessens the distance between us and rituals performed centuries ago. 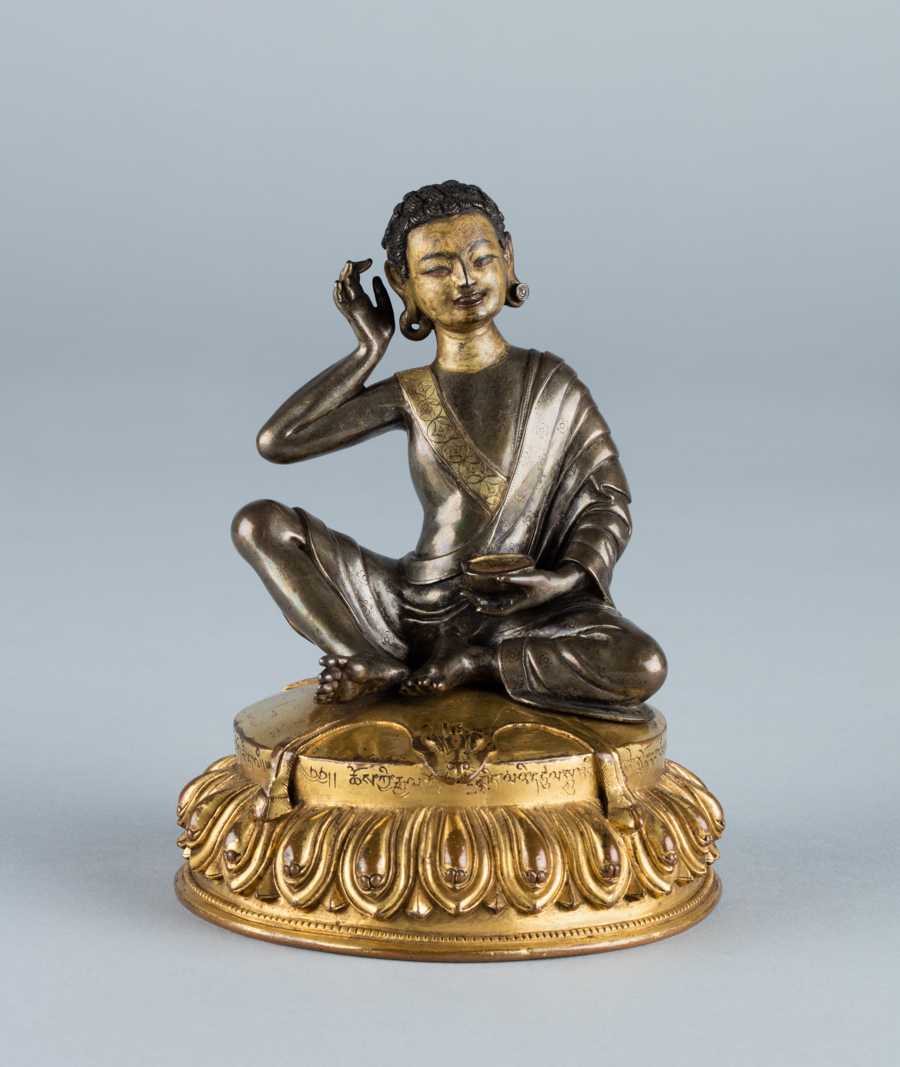 Yet if the exhibition enhances the effect of extraordinary ritual objects, it also seems to nudge the visitor toward spiritual awakening. The icon of the exhibition is Milarepa, an eleventh-century saint and poet who authored some of Tibetan Buddhism’s most canonical songs. To sing them is to give voice to the dharma, which is the order of the cosmos as well as the teachings of the Buddha. An exceptional silver sculpture of Milarepa, made in Tibet five centuries ago, appears at the entrance. He sits in a glass-enclosed niche at the center of a parabolic wall of sound-absorbing panels—eyes shut, a blissful smile on his face, a cupped hand held to his ear.

Milarepa seems to consecrate the acoustic fortification and ask: Can you listen like I do? Regrettably, I cannot. No matter how deeply I listen, I can’t exercise attention like a veteran monk.

I’m sympathetic to the notion of listening—or bird-watching—as an antidote to a screen-addled culture obsessed with momentary impressions, trivial achievements, and ego inflation. But I’m not persuaded that, thanks to a heightened sensitivity to sound, I’ll realize that all beings and matter are fundamentally connected, as Resonant Universe (2017) suggests. The video, coproduced by the American Museum of Natural History and the Rubin, is a cosmic trip from a monastery, where monks are chanting, ringing bells, playing drums, and blowing horns, to beyond the iridescent disc of the Milky Way. After illustrating how sound waves travel through the air, the video explains that, according to certain traditions, chanting “om” “can transport you beyond the sun,” and the reverberation of this “seed syllable” encompasses “everything in the universe.” 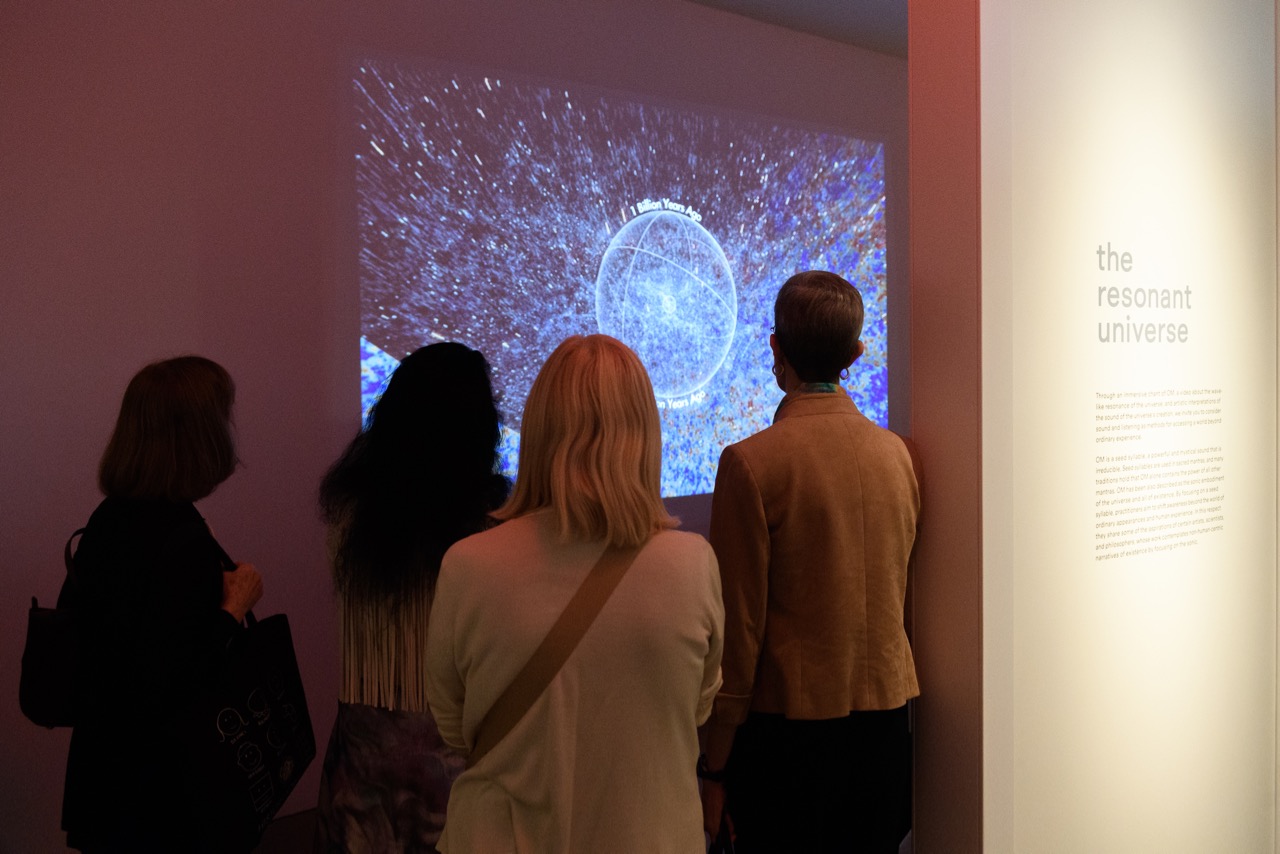 This insistence on the metaphysical dimension of sound is echoed in the arrangement of the contemporary works in sections that address the dissolution of the individual, sacred music, death, and the birth of the universe. Meditative drones, immersive field recordings, and transporting soundscapes are the norm. Fortunately, most of these works deal with the tension between Buddhist principles and the technological mediation and social saturation that characterize contemporary life (at least in the vicinity of the Rubin).

Le Corps Sonore (Sound Body) (2017), by Laetitia Sonami, Bob Bielecki, and the venerable French electronic musician (and Milarepa acolyte) Éliane Radigue, is exemplary. The installation transforms the Rubin’s six-story spiral staircase into a “sonic labyrinth,” and is invisible except for custom speakers stealthily installed along the staircase’s perimeter. Sinewy tones shuttle up and down, billow and disperse, rumble and pulse. The composition metamorphoses as time passes, as the listener ascends and descends the yawning helix; one sense overtakes the others, and the pulsing frequencies come to seem as substantial as the railings, steps, and walls. Like many of the commissioned works, Le Corps Sonore conveys the centuries-old Buddhist conviction in the transitory nature of all that we typically hold to be substantial and enduring, while highlighting the role of new technologies in molding what we believe.

Given the exhibition’s excessive encouragement to find one’s peace, I was especially relieved to encounter works that involve irony, aggression, and crude technologies. C. Spencer Yeh, an artist and musician, curated ten works that reflect on the sound of the creation of the universe, which yielded incredible chaos, if also, eventually, something like order. In doing so, they take up the task of reconciling the world of Buddhism and the world that we now inhabit. Knotted Gate Chant Cycle, by the duo MSHR, consists of twenty minutes of electronic screeches and scrapes—a “cybernetic composition” in which homemade synthesizers respond only to flashing lights, and vice versa. Yeh’s contribution, AUM TTS (Rubin Edit), is a drone made from text-to-speech voices chanting “om” (which they could only pronounce when the word was inputted as “A-U-M”). Yeh’s manuscripts were read by scores of scripts, and the work progresses through the resulting files; voices overlap, but, unlike in Collective OM, each artificial individual remains distinct. AUM TTS seems parodic, but nevertheless generates a trance—and a premonition of a nirvana in which selves have not only been shed, but machines do our chanting for us.