In praise of felicity and “juicy goodies”: a pop-music book by
Lesley Chow. 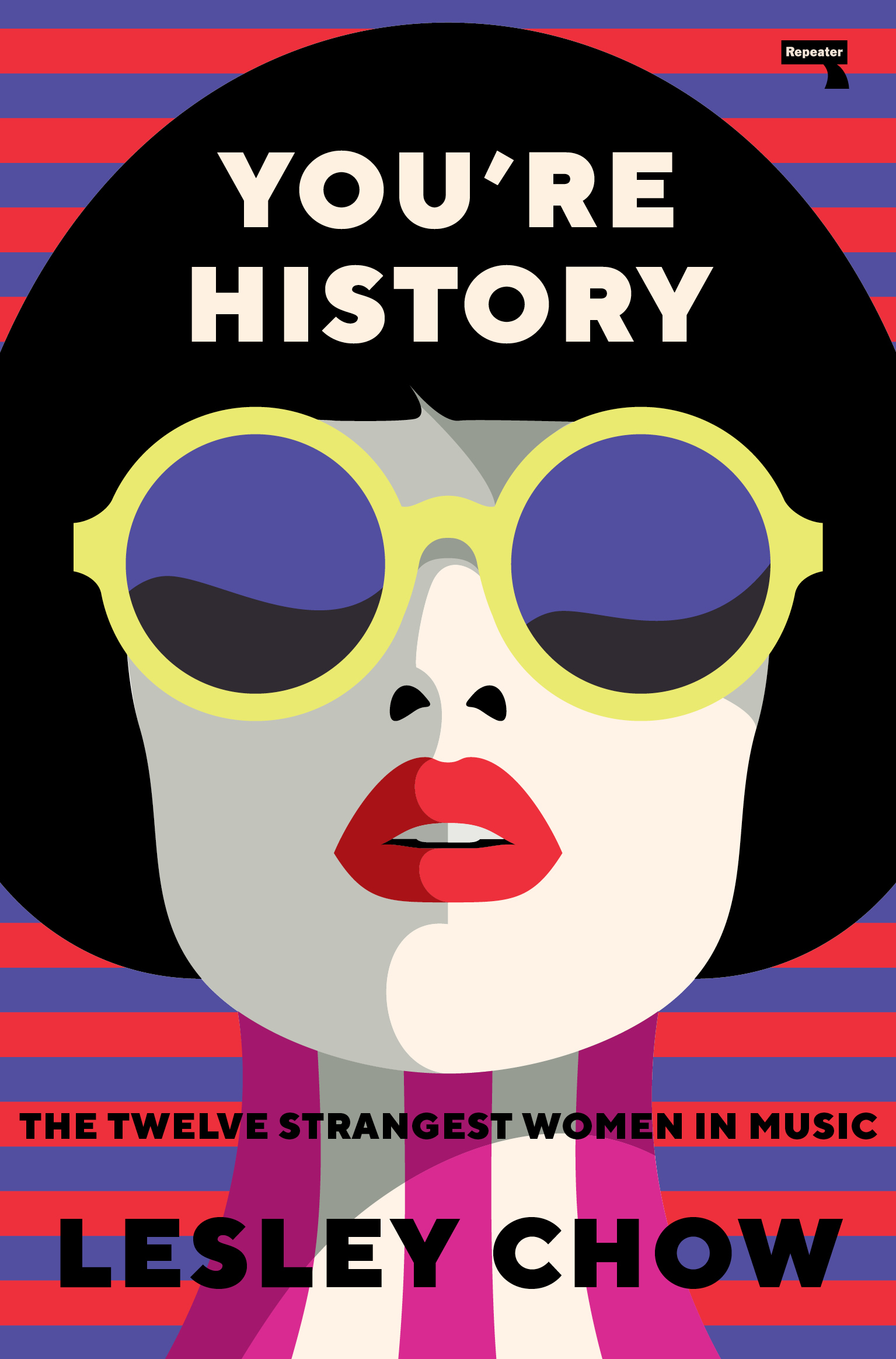 Pop music critics use the tools and terms with which they’re comfortable. These generally reflect a background in the humanities, and often a degree in literature, rather than technical knowledge about music. So it makes sense they tend to treat pop songs as stories or statements. This slant toward lyrics was chronic in the early days of rock criticism, when writers like Ellen Willis and Paul Nelson would appraise the Velvet Underground or Jackson Browne without once referencing the sonic aspects of the work, treating the records instead as repositories of moral wisdom and insight into the human condition. Things improved somewhat in later decades, with insistently sonic genres like shoegaze and electronica demanding to be written about sensuously. But recently there’s been a resurgence of the “reading” pop approach: artists like Lana Del Rey assessed in much the same way as a ’70s singer-songwriter, the careers of other major pop figures tracked as a sequence of persona shifts and political positions.

Here comes Lesley Chow to the rescue with You’re History: The Twelve Strangest Women in Music, a wonderfully provocative and thought-provoking polemic that reveals and revels in a different way of responding to pop. Instead of a lyric-thematic or sociohistorical analysis, the Australian critic focuses on pop’s nonverbal ecstasies, placing singers like Chaka Khan in “a canon of ‘ohs’ and ‘oohs’ that give outrageous pleasure.” Chow zigzags across pop history, rewriting it as a catalog of sweet nothings that say so much without ever assuming a legible meaning. It’s a kind of micro-criticism, attuned to tiny irruptions of exquisite non-sense: the pressure a singer puts on a particular syllable that triggers an electric sensation that can’t be classified, the impulsive decisions that arise in rehearsal or the recording studio, generating a type of throwaway magic Chow contrasts with more considered forms of songcraft.

“I want to advocate for urgency and pleasure,” Chow declares, affirming her attraction to “performers whose effect on the body is hot, explosive, and immediate,” as opposed to those who prompt supposedly refined and mature modes of appreciation. Her sensualist approach to music feels closer to a food writer than a literary critic. The emphasis is oral as much as aural: it’s startlingly original the way she pays attention to what the lips and tongues of singers are doing and how this mimetically transfers to listeners moved to sing or rap along. “We should feel the pleasure of pouting or smoothly extruding words before we have time to digest” a lyric’s significance, Chow argues. “The mouth needs to be transfixed before the mind.” Literalizing the idea of good taste in music, she often uses the language of eating to evoke the flavor of voices: Rihanna’s taffy-like timbre, Azealia Banks relishing particular words as “juicy goodies” rather than units of meaning. Celebrating Sade, Chow describes how the singer “works up a savory thickness in her mouth” and enjoys “lolling a word around like hard candy.”

Sade is one of several initially disorienting inclusions in a book bearing the subtitle The Twelve Strangest Women in Music. From her chic beauty to her sultry voice to the languid luxury of the music, there seems nothing weird about Sade’s decades-spanning success. Chow does persuade even a Sade-skeptic like me that there’s more than immediately meets the ear here. But the book’s gimmicky-sounding subtitle undersells it, veering away from the most interesting argument toward a never-quite-defined concept of “strangeness.” Chow is not interested in the overtly kooky (there’s no Björk, Mary Margaret O’Hara, or Lene Lovich here). Instead, she’s drawn to mainstream figures like Janet Jackson, TLC, and Rihanna, ubiquitous to the point of seeming commonplace yet retaining an elusive quality: “some element that is difficult to process.” That feels inadequate—especially as Chow usually proceeds to identify the X factor, brilliantly. She gets closer to pinning down what she values through demeaning its opposite, contrasting the “strange” star with merely “strong” singers like Adele, an emotionally direct dramatist whose belting style is all “strain and muscle.”

Chow isn’t rigid about her own heterodox creed: certain chapters, like those on Taylor Swift and Shakespears Sister, whose song “You’re History” supplies the title, slip into a more conventional analysis based around public image and song imagery. But the core of the book involves a close-listening anatomy of the voluptuousness of utterance itself, celebrating artists who thrill because of the way they say rather than what they say. The stars here, and the cue for stellar writing, are Chaka Khan and Tom Tom Club. From the “gladdening moments” of “I’m Every Woman” to the “mounting breaths” of “Ain’t Nobody,” Chow exalts Khan’s “miraculous voice”: the way it “maintains a very slight smoke, the texture of brushed copper” and its “haptic effect” on the listener, like “a cat rubbing up against you.”

Tom Tom Club is an especially intriguing case, because the main song under inspection, “Wordy Rappinghood,” explicitly addresses the uses and misuses of language. Enacting the theme through sheer frolicking nonsense, the main hook is a garbled childhood chant beloved of Tina Weymouth and her singing sisters Lani and Laura. But other lyrics work through deconstructive wordplay. Lines like “it’s okay, I’ve overstood” and “eat your words but don’t go hungry” recall Rasta’s lexical inversions and Sun Ra’s word equations: the pun ’n’ games deployed by marginalized people looking to outwit the master language.

“What are words worth?” ask Tom Tom Club, the allusive playfulness hiding a serious question, one that might have been a more revealing title for this book. Chow’s writing similarly shows how language can be pushed right up against its own limits. Her angle of attack is not unprecedented: Susan Sontag set herself “Against Interpretation,” Roland Barthes delectated in “the grain of the voice,” Nik Cohn named his 1969 pop chronicle Awopbopaloobop Alopbamboom after Little Richard’s delirious gibberish. That was Cohn thumbing his nose at both the poetic aspirations of self-serious rock artists and the emerging profession of rock critics earnestly parsing their meanings.

Chow similarly swipes at male rock critics with their ponderous investment in literate songwriting and pompous complaints about dance-pop’s inane lyrics—though in my experience, there are just as many female fans sophomorically committed to deep-and-meaningfulness. It’s also worth noting that the nonverbal is not a unique property of female pop, as Marc Bolan, Al Green, Prince, and even arch-wordsmith Morrissey in his yodeling flights show. A world away from the sensuality that Chow prizes, there’s a current of aggressively amorphous vocalization in rock: the grunts, groans, growls, and roars of Iggy Pop and extreme metal singers, the whoops and percussive vocal effects known as “ad libs” in recent rap—sounds suggestive of carnage rather than carnality.

Still, You’re History benefits from the author’s commitment to engaging only with what turns her on, rather than dutifully undertaking a wider survey. A slim, fast read, the book offers a pure hit of prose pleasure. The writing embodies the polemic, which is refreshing at a time when music criticism has never been so virtuous and so inattentive to the bliss that is pop’s greatest gift.

Simon Reynolds is the author of eight books about pop culture, including Retromania, the postpunk chronicle Rip It Up and Start Again, the techno history Energy Flash, and Shock and Awe: Glam Rock and Its Legacy, from the Seventies to the 21st Century. Born in London, currently resident in Los Angeles, he is a contributor to publications including the Guardian, Pitchfork, and the Wire, and operates a number of blogs centered around the hub Blissblog.