In her new assemblages, the artist remixes both herself and art history. 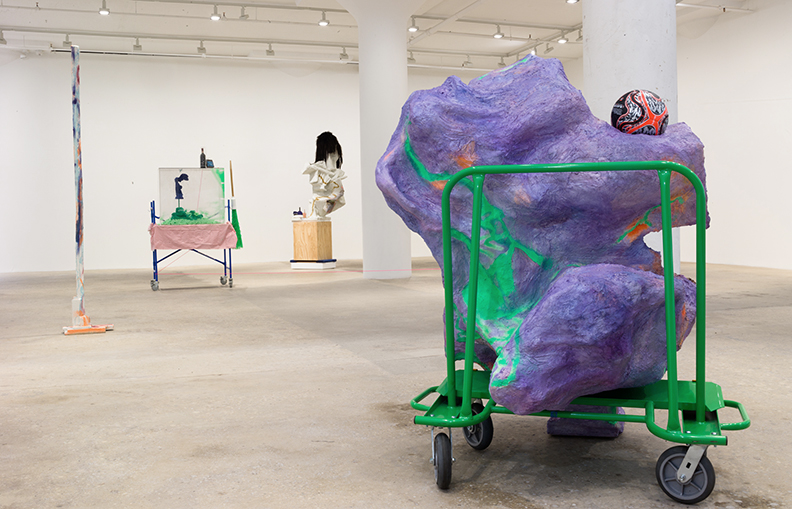 “Botryoidal masses and fibrous aggregates.” That’s one way to classify the gnarly, radiant, brainy assemblages of Rachel Harrison. I stumbled on the description at random, while decoding the word “prasine,” which serves as the title of the American artist’s eighth show at Greene Naftali—twelve new sculptures and one series of photographs. Like Harrison’s work, the word is esoteric and layered with meaning. A mineral known as psuedomalachite, prasine also refers to green the color of leeks, an adjective that doesn’t get a lot of action. (Vladimir Nabokov used it once, in his 1969 novel Ada or Ardor, to describe a woman’s eyes.) And like Harrison’s pictorially savvy polychrome sculptures, prasine conjoins color and mass. 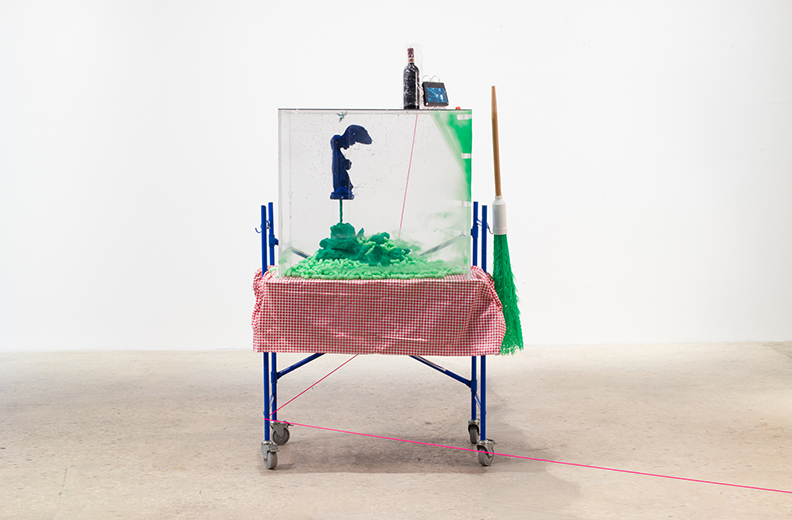 This may seem like a deep dive down a linguistic rabbit hole, but consider the footnotes. In lieu of a press release, Harrison’s show comes equipped with an annotated script that imagines a wonderfully contradictory and open-ended conversation between twenty works of art (including her own). Each artwork-cum-actor in this ersatz play—from the Winged Victory of Samothrace (which appears flocked in blue in a piece in the show) to Nam June Paik’s Buddha TV—is assigned one line of dialogue. Kara Walker’s A Subtlety, or the Marvelous Sugar Baby is accompanied by Walker’s scene-stealing quote: “I do what I’m feeling and what I’m feeling is monstrous.” That overtone of defiance—and feminism—recurs through Prasine. Take Sculpture with Boots, an eight-foot-tall endearingly parti-colored behemoth affixed with a photograph of Lee Krasner’s paint-splattered work shoes—a battle-scarred relic from the male-dominated Ab-Ex trenches. Not all Prasine’s references are art-specific. In the script, for example, Joseph Beuys’s sled is given a line from Hillary Rodham’s 1969 commencement speech: “We are, all of us, exploring a world that none of us even understands and attempting to create within that uncertainty.”

Harrison’s last outing at Greene Naftali, in the spring of 2016, was a cathartic blast of anti-Trump sentiment, involving readymade piñatas of the presidential candidate, just as his campaign was gaining steam. Crucially, Harrison also included several of her older works, which had been defaced by bullets the previous year under tragic circumstances (a man shot them in an Ohio museum, before killing himself). The artist opted not to have her pieces conserved; in that show, the damaged works became harbingers of a sociopathic American future. Now, Harrison circles art history’s wagons, while keeping a wary eye on the political landscape. For all its sometimes-coy chatter, the show is a bracing reminder that art for art’s sake is still art in the name of the world. 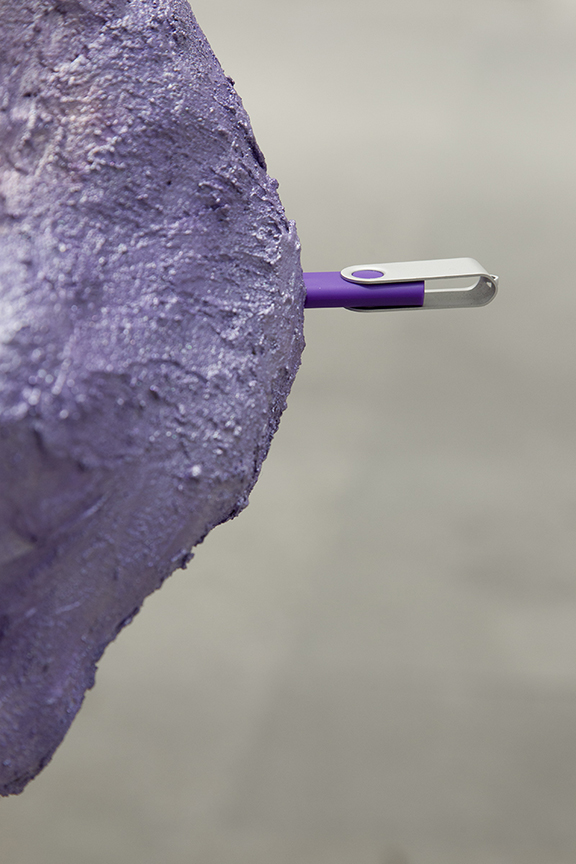 In Bears Ears, Harrison’s title makes explicit reference to more than a million acres of red-rock lands in southeastern Utah, a sacred Native American site that Obama designated as a national monument. Now Trump is crying land grab and wants to open it to drilling, logging, and mining. Never mind that the area is home to ancient wall etchings that have been dubbed “the Sistine Chapel of the West.” In Harrison’s sculpture, a flash drive storing thirty-eight films by the late German filmmaker Harun Farocki extrudes like a tidy growth from a globular purple mass that sits on a green drywall cart. The sculpture also involves a Wilson-brand “black ops” soccer ball—yes, that’s a thing—with a grayscale camouflage pattern, a nod to Farocki’s Serious Games, about the use of video-game simulations to train soldiers in military warfare. 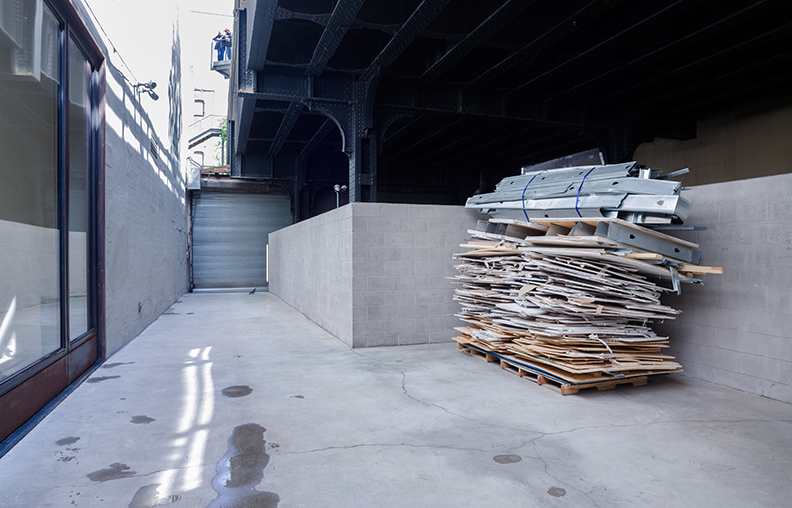 Harrison might have called her show Nevertheless, She Persisted, not just for her committed politics but for her penchant for remixing her past. Arguably the most radical work here, because it reshapes the gallery’s architecture, is Marilyn with Wall, which she first conceived for Greene Naftali, in 2004, and has recreated several times since. (The piece is an ongoing nod to the sculptor Michael Asher.) For this incarnation, she demolished an interior wall in the gallery and trifurcated the scrap. Just inside the front door is a tightly packed array of sheetrock and studs. Walk around to the back of the piece and you see the kicker: a picture of a picture, Marilyn Monroe, the original source for Warhol’s iconic painting. Another stacked bundle of scrap rests outside in the courtyard—it’s easy to bypass it as garbage. One lone fragment remains in the floor, at the northwest end of the gallery, a synechdocal orphan. 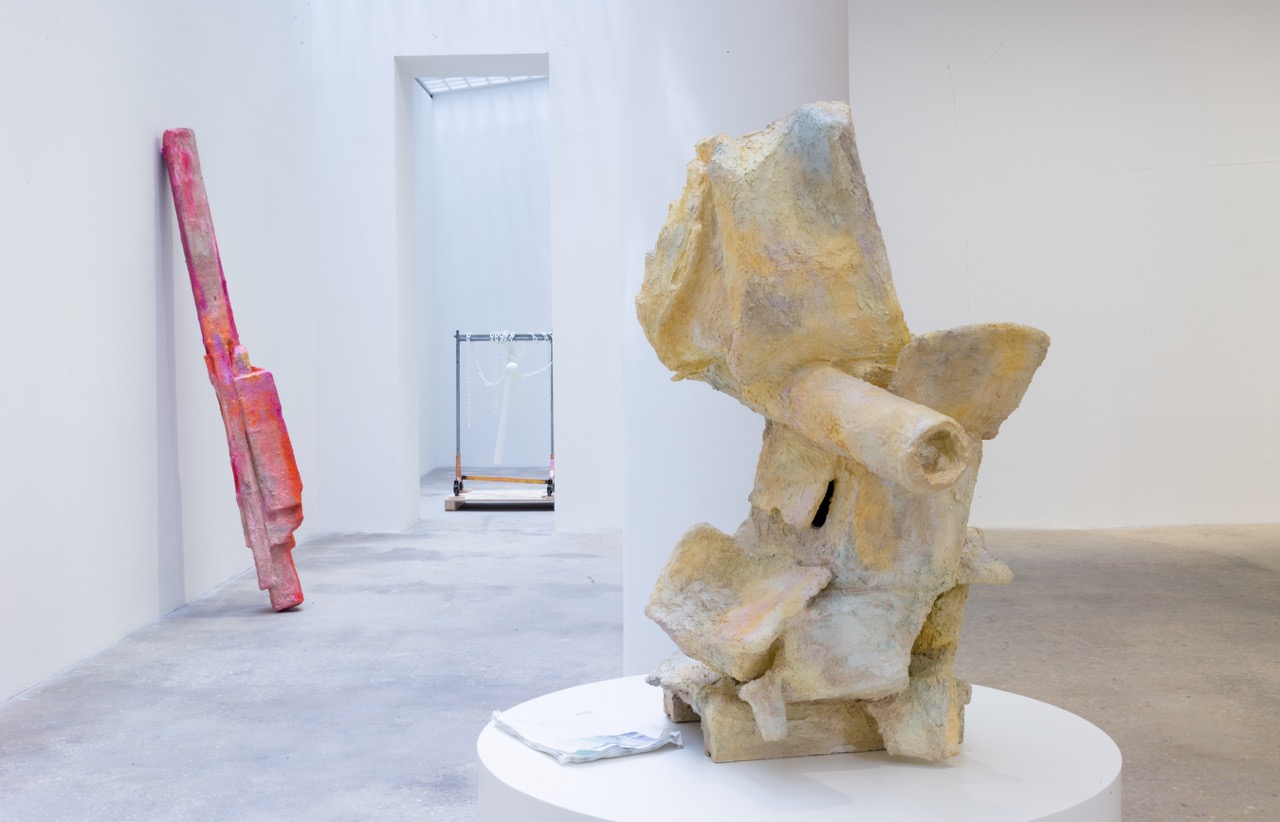 With Every Sculpture Needs a Trap Door, Harrison goes the full Ouroborous—the alchemical symbol of the snake devouring its own tail. The title lifts a quote by the artist herself that appears in a New Yorker profile. A print out of Andrea Fraser’s essay “Why Does Fred Sandback’s Work Make Me Cry?” is incorporated into the lumpen dust-colored mass, which builds in an enticing conundrum. Sandback created the illusion of volume in space by stretching taut lines of yarn. The result was a “sculpture” that was as much idea as thing, with no distinction between surface and interior—no need for a trap door when a sculpture and the space it fills are one and the same.

Every Sculpture Needs a Trap Door also conceals a reference to an artist you’ve never heard of: Gutzon Borglum, who spent fourteen years carving Mount Rushmore. When he died, in 1941, he left behind an unfinished chamber, hidden inside Abe Lincoln’s forehead. Look carefully at Harrison’s ghostly assemblage and you’ll notice an inverted mask buried close to the surface—an obscured portrait of the sixteenth president, a longtime Harrison muse. As her work grows stronger and stranger—more committed than ever to appearing both complete and always in process—Prasine finds Harrison eager to reveal her influences, to cement her already assured place in art history. It’s reassuring, then, that she’s also still burrowing deep into secrets.

Andrea K. Scott is a writer and editor on the staff of The New Yorker magazine, where she has written on subjects ranging from a profile of the sculptor Sarah Sze to an appreciation of the downtown art maven Lia Gangitano.