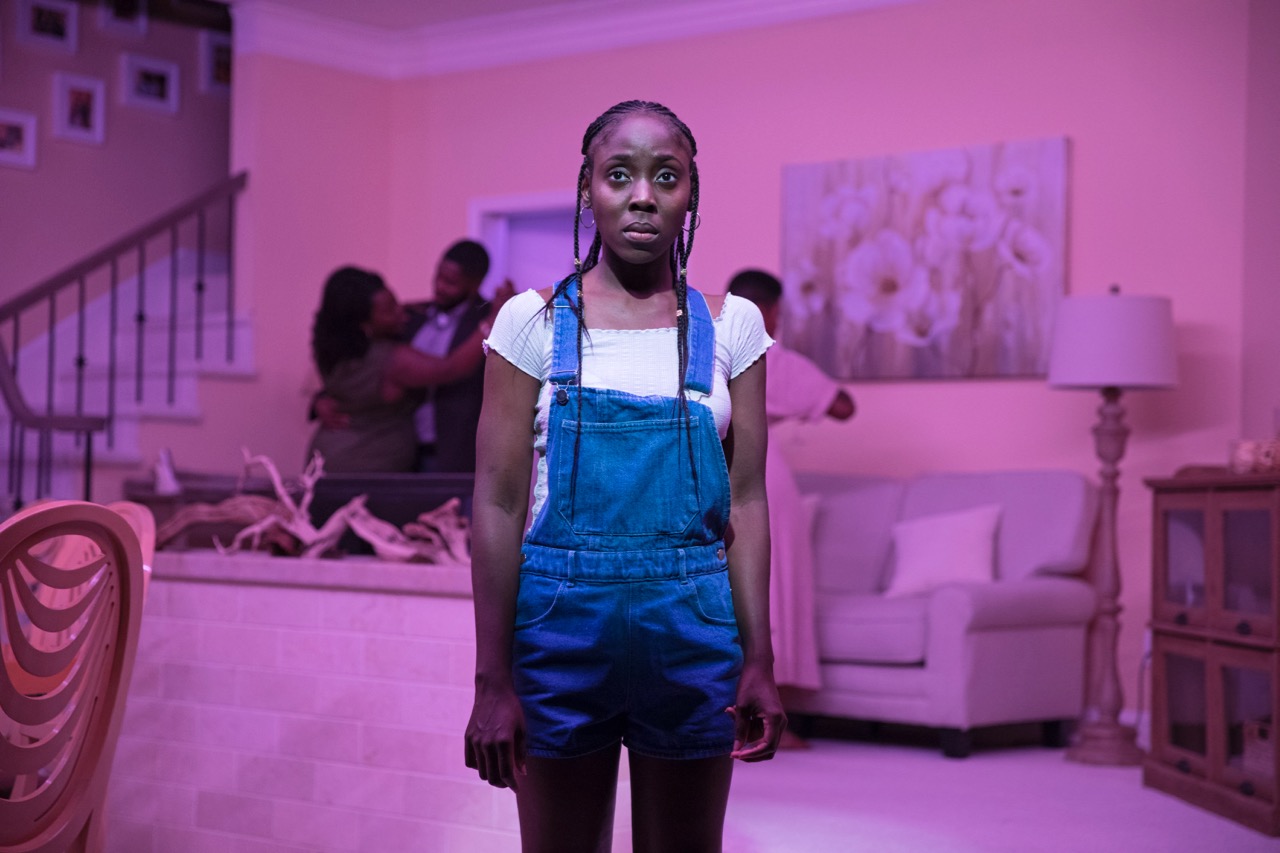 Usually we enter a theater knowing where to sit, where to look, how to behave. It’s a kind of safety: a role we know how to play. Yet Jackie Sibblies Drury’s shapeshifting Fairview wants us to think more carefully about those old conventions, about the way power and race move through a simple thing like consuming a piece of art. She’s also expressing a particular kind of sadness, and she uses the play to train us to understand its terms. As part of its formal innovation, the three-part Fairview is deeply didactic: first demonstrating the problem, then discussing it, then asking for class participation.

Drury makes Russian-doll dramas; immersive, nesting, metatheatrical plots that usually contain racism as their innermost figure. Her first—and astoundingly good—show was the breathlessly titled We Are Proud to Present a Presentation About the Herero of Namibia, Formerly Known as South West Africa, From the German Sudwestafrika, Between the Years 1884–1915. In it, the theater became a rehearsal room where a troupe was devising a work about genocide but stumbling over the performers’ own bigoted limitations. In Really, her one-act about the tyranny of white male “genius,” the audience sat in a plywood performance space, watching a young black photographer try to escape the reputation of her dead husband. No one realized the room itself was a gigantic pinhole camera till a ghostly image materialized on the wall in front of us—the white husband watching from the beyond. 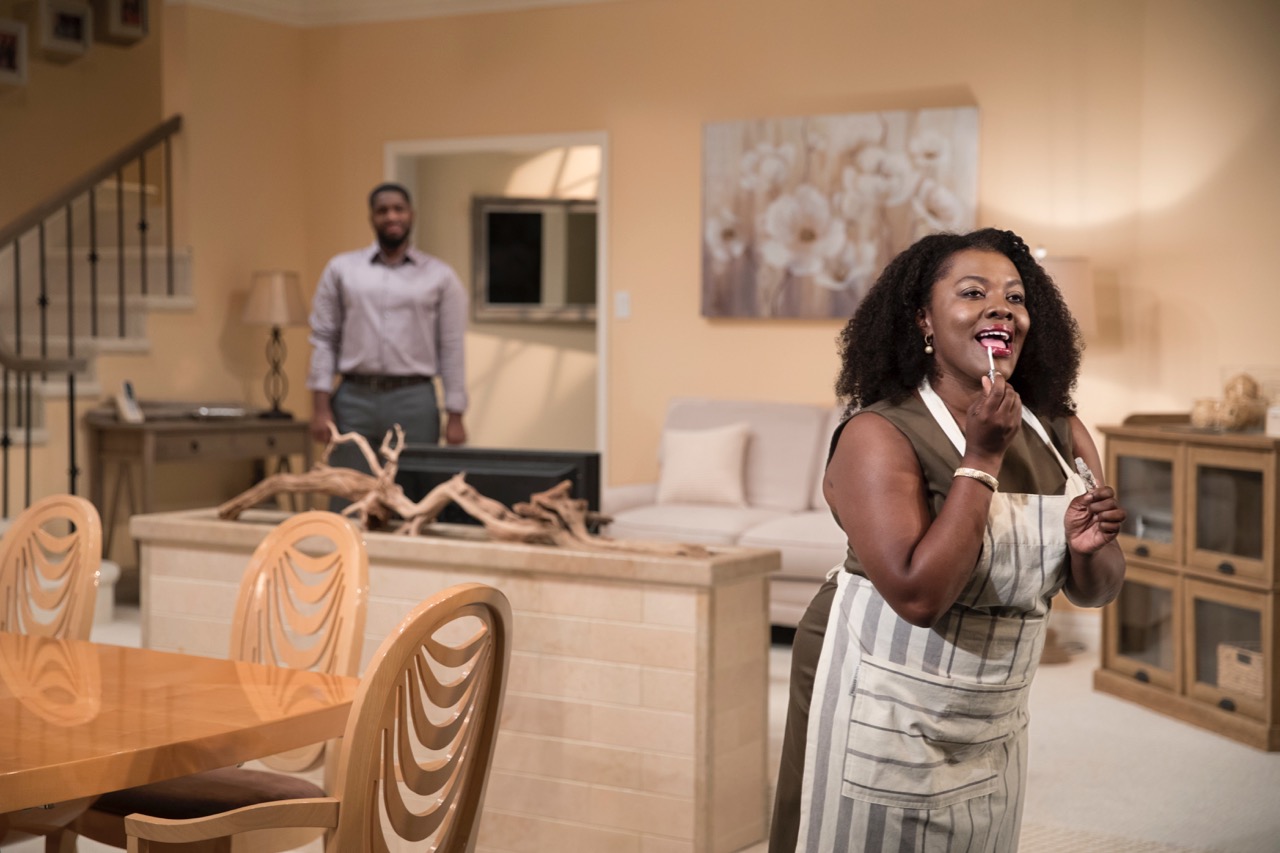 Fairview starts quite normally. In fact, it feels as though we’ve accidentally wandered out of the experimental Soho Rep and into some conventional theater. Through a black frame that boxes in the proscenium—it could be a portal or the edge of a photograph—we see a comfortably bland living room: sunken dining area, stone fireplace, swinging door to the kitchen, decorative driftwood. Everything in Mimi Lien’s set is smooth white or dusty rose and smells of wealth and carpet shampoo.

The Frasier family is getting ready for Mama’s big birthday dinner. Daughter Beverly (Heather Alicia Simms) is hosting, so she’s grating carrots and pretending to fix her makeup in the “mirror” that is really the stage’s fourth wall. As she grooves to the stereo (“It’s a Family Affair” by Sly and the Family Stone, for this-is-a-normal-family-play emphasis), her husband Dayton (Charles Browning) admires her. She tuts at him for sneaking up on her.

The inversions that will follow in Fairview all harken back to this first exchange. It’s just watching—neither the audience (cozily settling down to do just that) nor Dayton can understand why Beverly objects. But by the end of the play, Drury will have twice upset the calculus of black bodies being observed and anatomized by an audience that refuses to identify itself. 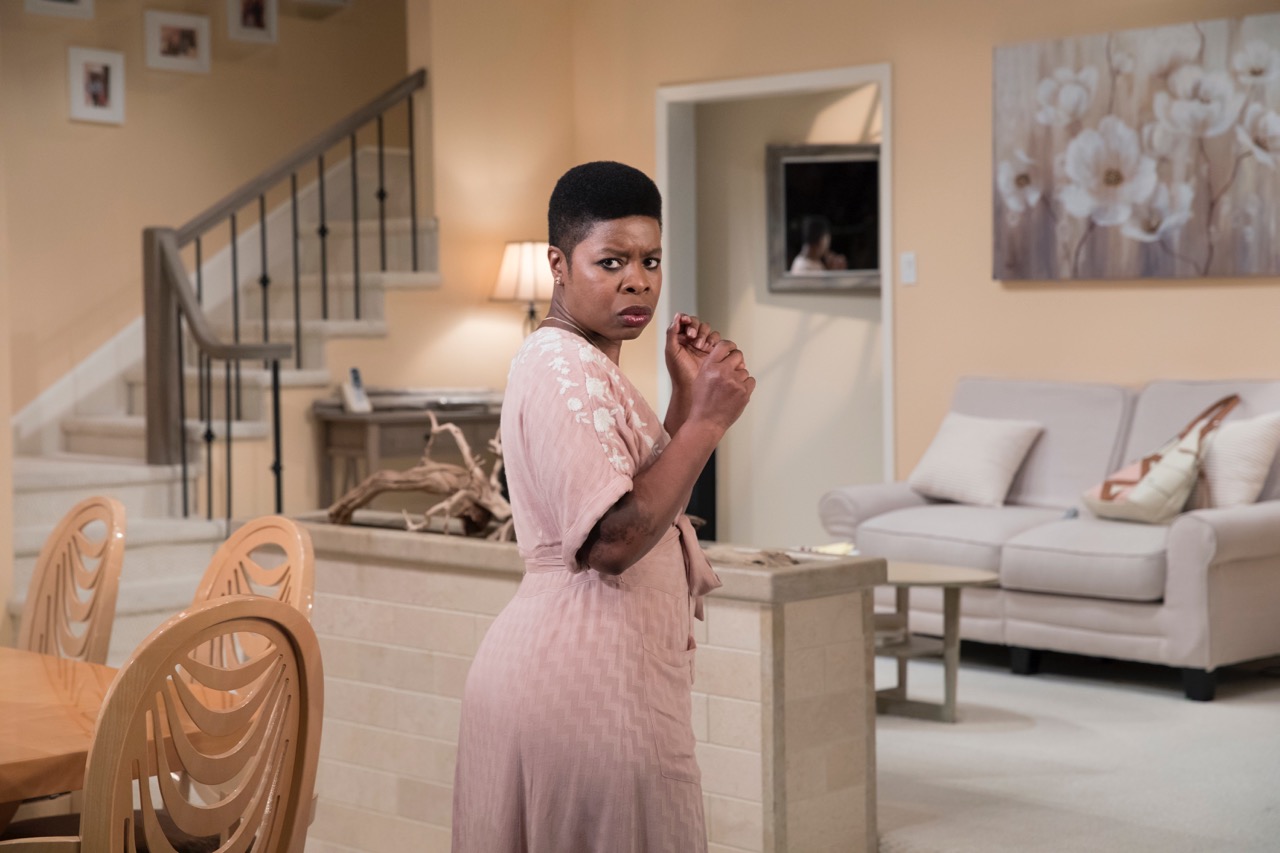 The first forty minutes of the play are a tartly written comedy of Beverly’s frustrated dinner preparations, hampered by her critical sister Jasmine (the superb Roslyn Ruff), who swans around snarking about the cheap Brie; her husband, who keeps goofing off; and her high-school-age daughter Keisha (MaYaa Boateng), who may have a secret. Director Sarah Benson and the cast do super work, particularly in Ruff’s sudden lazy-wristed dances (Raja Feather Kelly set the movement) and Simms’s now-reasonable, now-exaggerated anxiety. The family laughs and squabbles as families do, though the seeming realism occasionally thunks like a bum piano key. Why won’t Mama come downstairs? How come the sound design sometimes glitches? 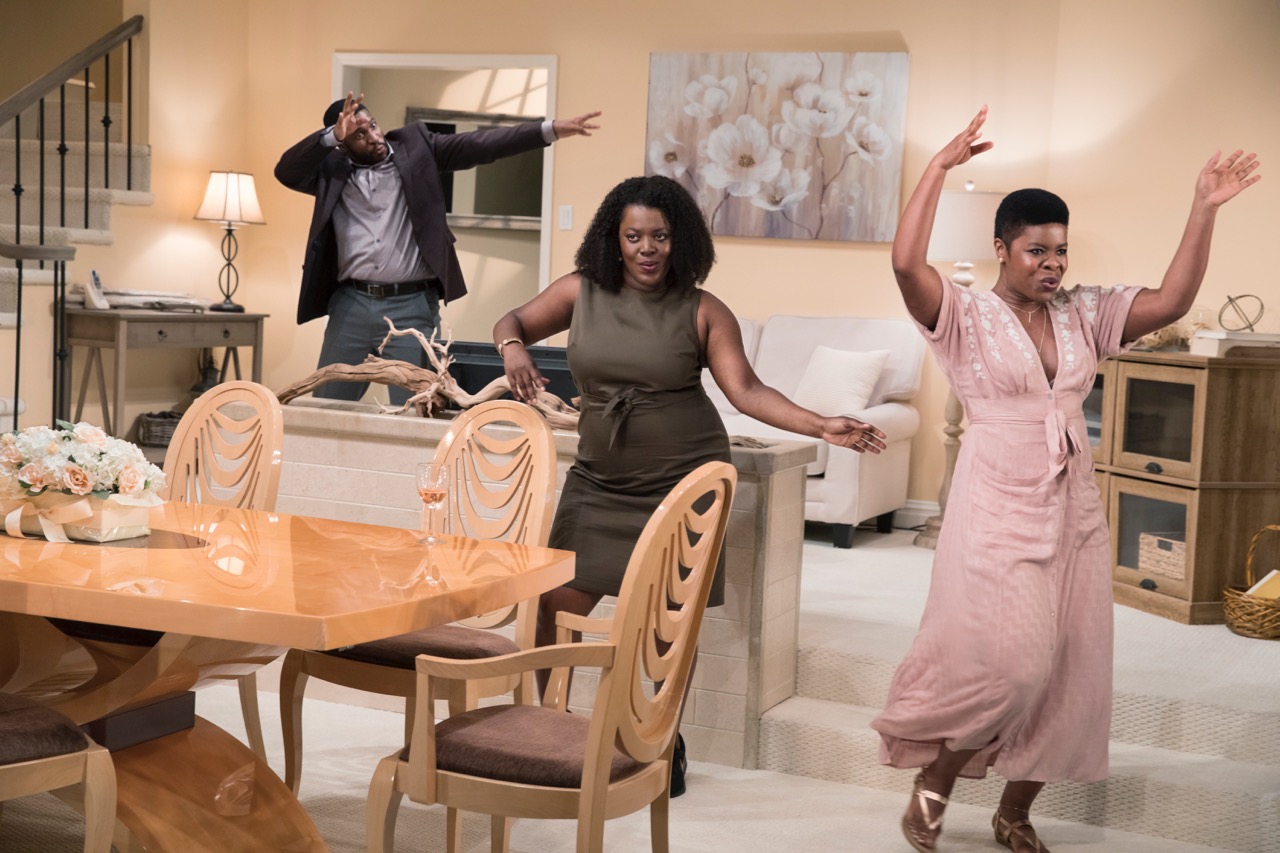 Then the scene repeats in its entirety. But now we hear a commentary track by four musing white people. The voices ask, “What race would you be if you could choose?” and talk about the Frasiers with a mix of objectification and a weird possessiveness. A woman’s voice trembles over how much she loved her family’s housekeeper; a male voice wants to be a black woman because “they’re so fierce!” Eventually, they break physically into the show, forcing themselves into the narrative. White Jimbo (Luke Robertson) “plays” Beverly’s brother Tyrone, but he’s full of bro appropriation, rapping (humiliatingly) and demanding that the Frasiers drink Colt45 instead of the craft beer they have on hand. The others also try to change the plot, baffled by the notion of a well-to-do black family. White Suze (Hannah Cabell) is the most well-meaning, but she can’t stop butting in, barging even into Keisha’s private soliloquies. “All I’ve ever done is try to be good to you,” she pleads. “You’ve got to stop telling yourself that,” replies Keisha.

Finally, Keisha turns the tables on the white people present in the audience, singling them out. The moment is one of confusion, full of hesitancy (Keisha is gentle as she issues her commands) and uncertainty (some people get furious or even talk back). It takes a long time for Keisha/Drury to get the white audience members to do as she says, coaxing and prompting until she turns, finally, to the people of color. “Do I have to keep talking to the white people . . . only to them, until I have nothing left for You?” As a white critic, this is a hard but important thing to hear from a playwright—one I love and follow—who is experiencing my admiration (and that of the majority-white Soho Rep audience) as an additional source of her own pain. 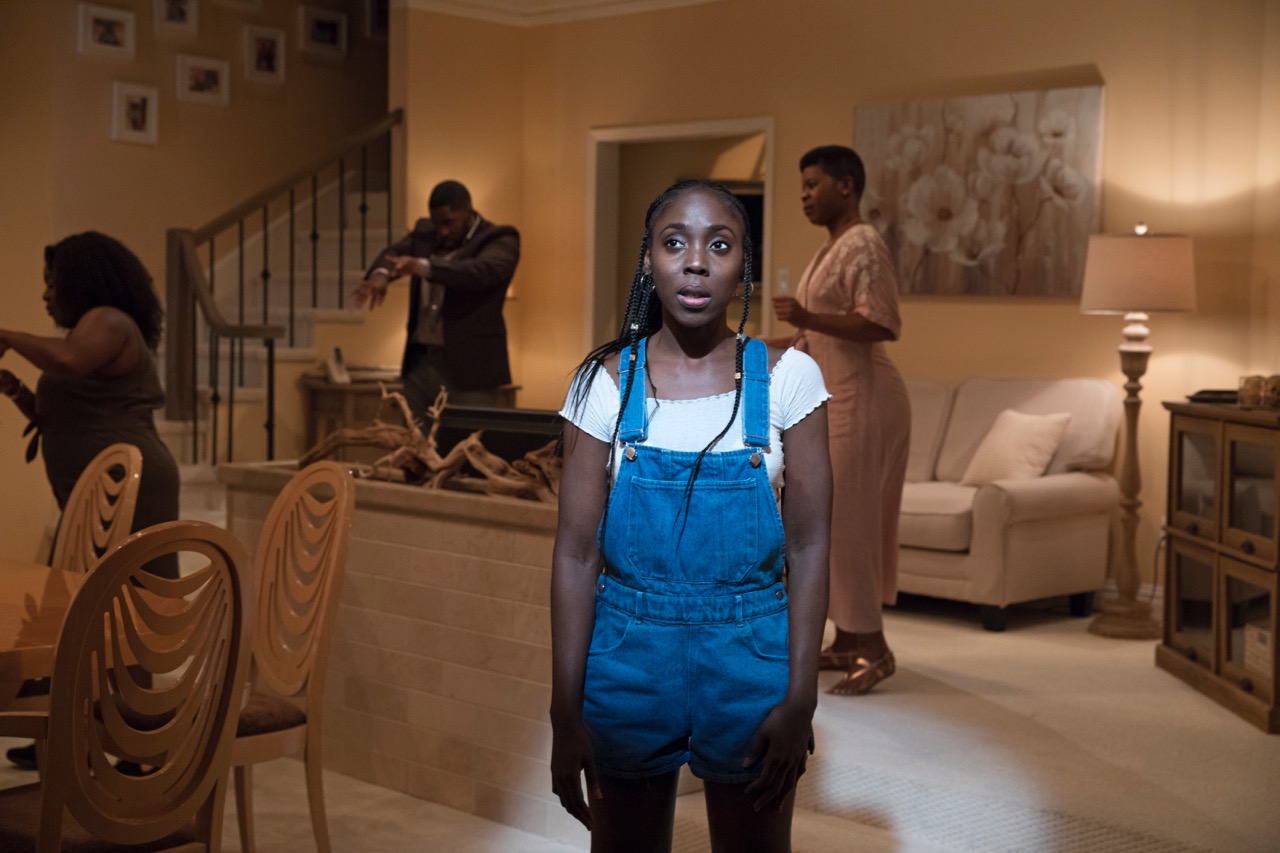 Drury is tremendous when she’s writing “pushed” realism, but the conclusion of this monologue of Keisha’s, barely two pages at the end of a deeply considered provocation, falls into a slight mealy fuzziness. Keisha/Drury says she’s been waiting to tell her own people a special story, but when she finally takes the chance to do so in a brief poetic section, it’s platitudes. (She describes humanity as “Who we all always are—A Person Trying.”) Yet these same two pages make for an unforgettable, tension-filled, complicated experience in the theater. In 1959, Jean Genet did something similar in The Blacks, when performers would at first only address the white theatergoers, and sixty intervening years—so much time to stop being precious about race—haven’t dulled the strategy at all.

Drury is drawing her scalpel blade through a tricky bit of flesh, dissecting the core illusion of white audienceship—that it is an anonymous, passive, default group in no way identifiable by its whiteness—with loving, almost tender care. The show is political, in that Drury wants to make the conversation about race in the theater more frank, and she dares to finish the art object with a sense of the incredible task ahead. There’s no catharsis at the end of Fairview, just an uncomfortable knowledge of something that each of us will need to take action to resolve. It is also, surprisingly, deeply personal, a portrait of a specific artist and her rather ambivalent regret about her own relationship to the experimental theater audience. You, of course, would regret not seeing it—but at least that’s a regret you can fix.