Theater
He Brought Her Heart Back in a Box 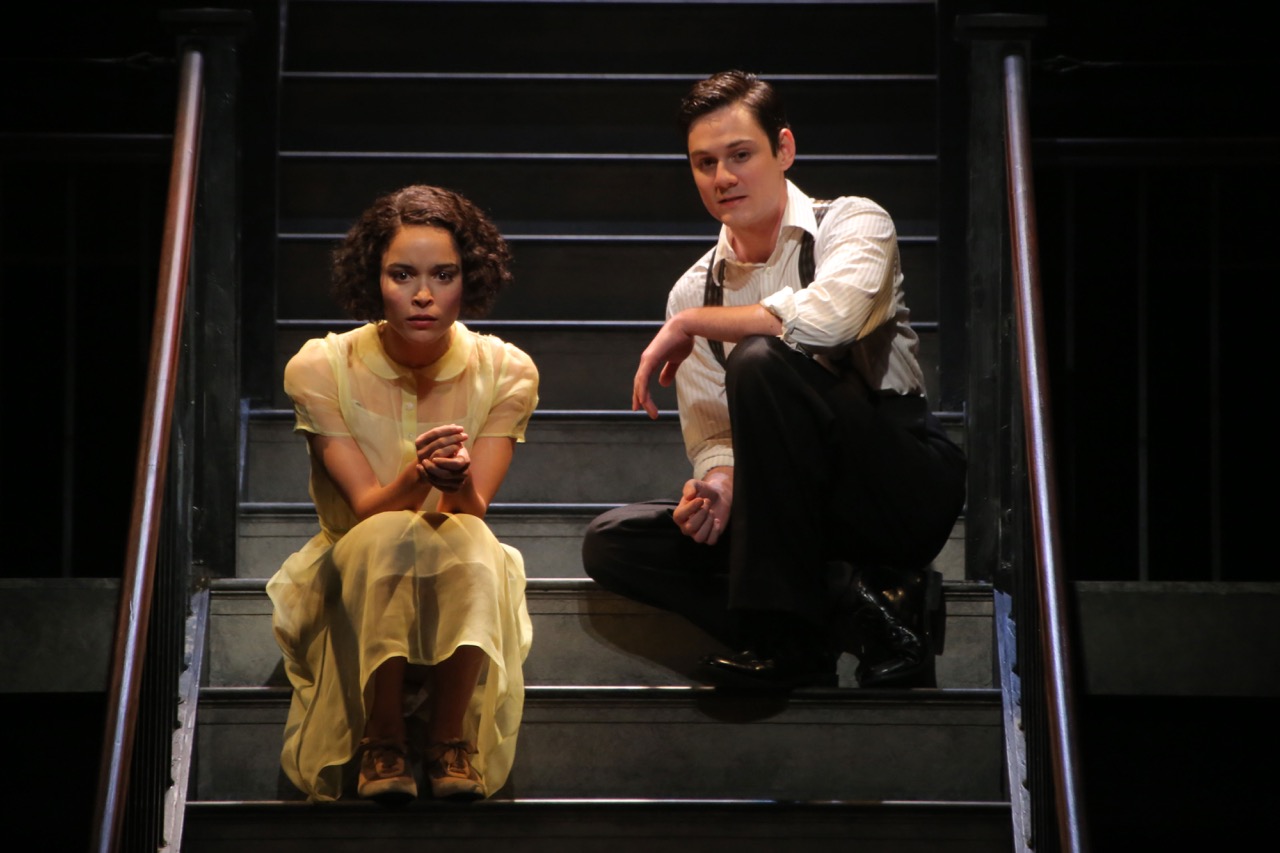 Juliana Canfield and Tom Pecinka in He Brought Her Heart Back in a Box. Photo: Gerry Goodstein.

He Brought Her Heart Back in a Box, by Adrienne Kennedy, Theatre for a New Audience, 262 Ashland Place, Brooklyn, through February 11, 2018

Adrienne Kennedy is the legend you might not know. She’s foundational to American lyric theater, the now widespread form that blends the drama of personal revelation with surrealism. She appears in all our play anthologies; she has a prize from the American Academy of Arts and Letters; she’s inspired three generations of writers, like her champion Edward Albee, Pulitzer-winner Suzan-Lori Parks, and the young MacArthur “genius” Branden Jacobs-Jenkins. Yet productions of her work are rare.

Kennedy can be difficult to stage—her plays are sometimes abstract, but even when they’re accessibly realistic, she reveals things of intense privacy and pain. She also demands long-term attention; her work benefits from engagement across multiple plays. Taken as a whole, her oeuvre is a hall of mirrors in which she uses different styles of autobiography to reflect herself back to herself. Kennedy’s fifty years of theater-making run the spectrum from expressionist hallucination (Funnyhouse of a Negro) to straightforward diary-shows written with her son (Mom, How Did You Meet the Beatles?)—but secretly, it’s all one self-portrait. Her plays should somehow be held in the mind at once: cantos in a poem, pictures on a wall, chapters in a book.

It’s been ten years since her last work—the Beatles piece, a reminiscence of her time in 1960s London—so Brooklyn’s Theatre for a New Audience is palpably thrilled to be mounting Kennedy’s He Brought Her Heart Back in a Box. They’re making history in premiering a new play by our last producing avant-garde master, and they know it. The show is barely forty-five minutes long, but TFANA has given it an entire evening to itself. Heart has pride-of-place in their season, and the piece has been placed squarely on a pedestal. The script, though, defies gravitas. It’s small and slippery, consisting of onion-skin strata: literary references, cinematic echoes, and long runs of remembered (or invented) family history. It’s simultaneously dense and feather light—the surface is a made-for-the-movies tragic romance, full of wistfulness and charm, yet below lies layer after layer of American violence. The play is working hard not to be a play: Kennedy builds in self-sabotaging elements (an actor has to perform two roles simultaneously), and glimmering dramatic allusions seem to ask us to take a break from the show, go look something up, and come back. There’s a line hidden in the stage directions that is core to the play’s thinking, but you’d have to read the typescript to find it. I wanted to watch Heart like an opera student, with the score open in my lap. 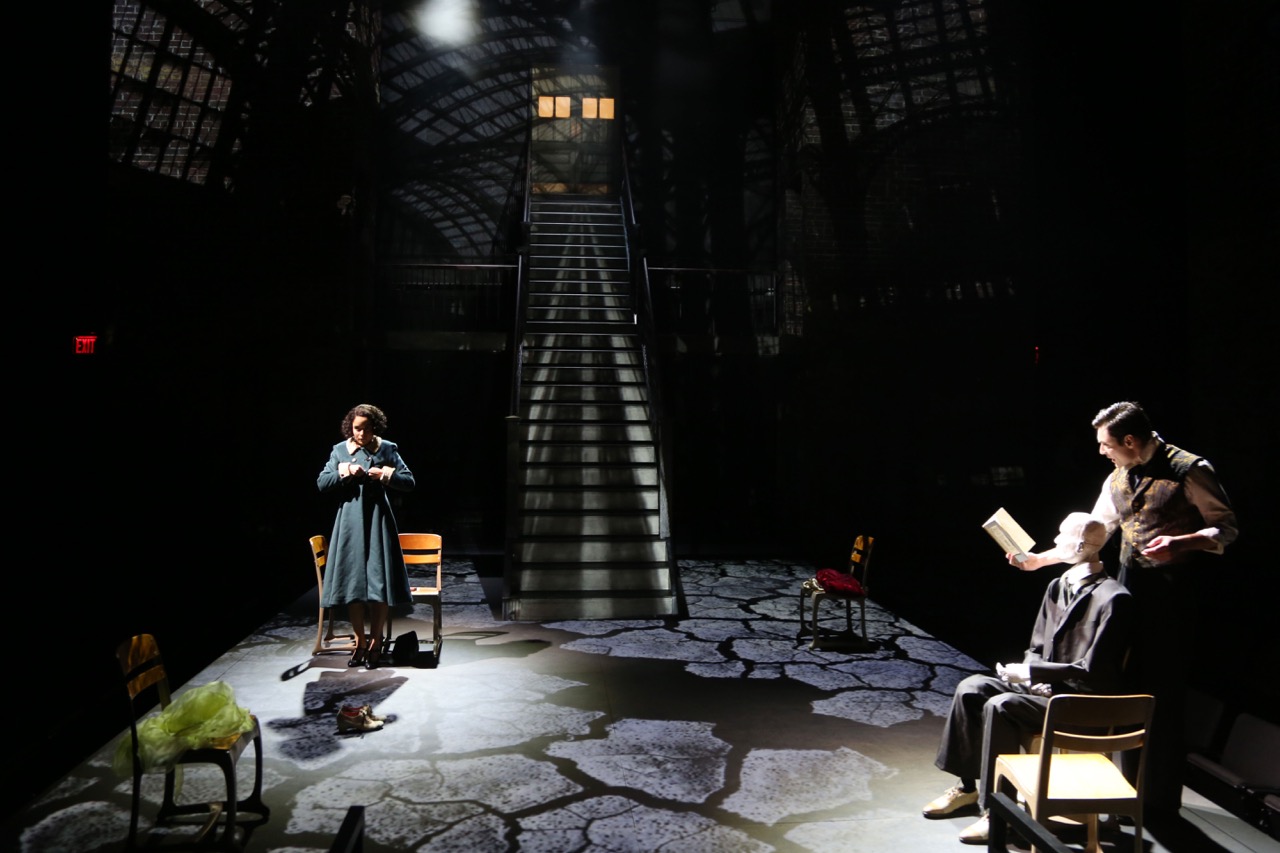 Juliana Canfield and Tom Pecinka in He Brought Her Heart Back in a Box. Photo: Gerry Goodstein.

In outline, the story is simple: two young sweethearts in 1940s Georgia plight their troth, conduct a lovers’ correspondence, reunite, and die. Chris (Tom Pecinka) is white, a starry-eyed actor with a clear tenor voice who’s the legitimate son of the richest man in Montefiore and grandson of the town’s founder. Kay (Juliana Canfield) has a rich white father too, but her mother was her father’s victim, a black fifteen-year-old orchard worker he raped and—according to some accounts—later killed. As Chris and Kay talk, they drift from actual locations into imagined landscapes. (In Kennedy, these are sometimes the same thing.) In the storeroom of the school for black children, Chris shows Kay an old model of their town with its miniature “Whites Only” signs; they recall seeing each other for the first time at the movie theater; Chris appears in a production of Noël Coward’s Bitter Sweet; they overhear children doing a play; they touch on the Underworld and its Fields of Lamentation. 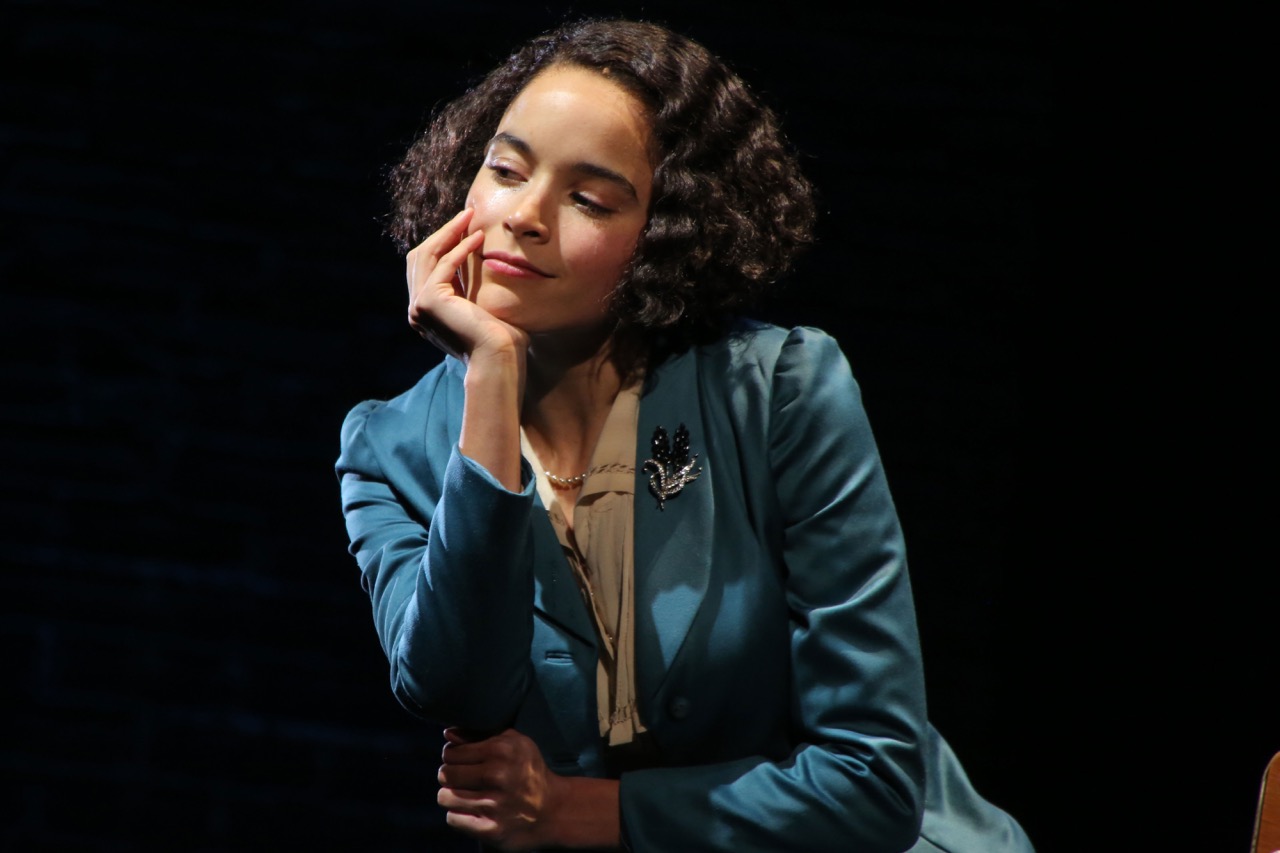 Juliana Canfield in He Brought Her Heart Back in a Box. Photo: Gerry Goodstein.

For all these limbos and simulations, reality does surround them—we hear radio broadcasts about the war in Europe, for example, and Chris drops hints that his segregationist father has somehow aided the Germans. But even with WWII on the American doorstep, the two are always looking backward into the past. In the play’s epistolary middle section, when Kay is at college and writing letters to Chris in New York, she returns again and again to the rumors about what happened to her mother seventeen years ago. Stories have swallowed up the facts: the town is convinced that her father kept her mother’s heart in a green glass box. Chris’s beloved papa, also a monster, sometimes seems like the same person as Kay’s father, but he’s actually another white man with illegitimate black children, another town grandee full of possessive, racist passion. In a clever gesture, director Evan Yionoulis puts Chris’s father onstage as a bone-white puppet, and Pecinka eventually “plays” him by manipulating the doll. As dear as Chris seems, he’s still in constant contact with his terrifying parent—opening his wooden eyes, cocking his head. 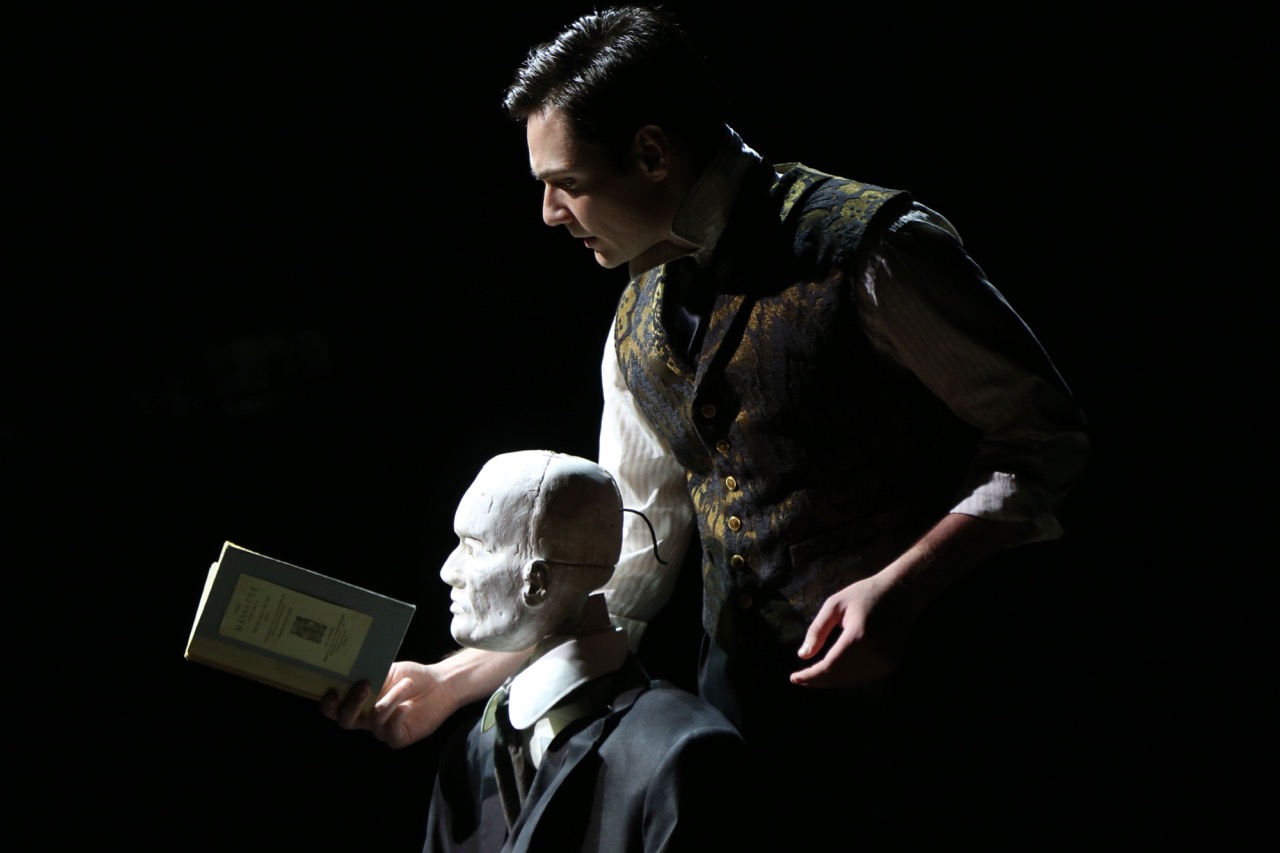 Tom Pecinka in He Brought Her Heart Back in a Box. Photo: Gerry Goodstein.

Lost in a fantasy about her own mother and grandparents’ sweet-rotten life in Georgia, Kennedy has written something deliberately partial, baffling, gristly, half-spoiled. It might be a poem? It would bear further study. Whatever it is, it could only flower in a production that’s sidelong and intimate. Here, though, the theater is desperate to treat it with “proper” seriousness. Yionoulis and her team try to allay our confusion, to solve this strange, refusenik art-object. They illustrate with projections; they over-emphasize moods. The actors offer up their best dimple-cheeked ingénues; the designers make a set that screams tragedy. But their efforts, even their reverence, stifle the play.

He Brought Her Heart Back in a Box adds another set of ghosts to Kennedy’s haunted autobiography. Some of Kay’s life is Kennedy’s mother’s life, while the furious conviction that nothing changes seems to be the writer’s own. Watching it is like sitting next to the playwright as she points to photographs, mixing stories from her favorite films with tales from her family’s past. Yet in the Brooklyn theater, the play’s hand-to-hand delicacy crumples under Christopher Barreca’s massive set—huge brick pillars and a fifty-foot-long staircase—and its mystery drowns in Austin Switser’s busy videoscape. Do we need to see looming shadows of children when we hear children’s voices? Fragile things wilt at a touch.

It may simply be that a normal, mid-sized, subscription theater isn’t structured to stage a work like this. The right production needs somewhere smaller and quieter and closer to your kitchen table. If you can, you should see Heart—how many such chances do we have? The better experience of the play will then be what you’ll remember, privately, afterward. Kennedy’s work, no matter in what form you encounter it, has a way of slipping into the far back of your mind. After a week, you’ll be able to imagine that you’ve read it, or that it was whispered to you, or even that you made it up yourself. It only took me a day before I dreamed of the green glass box. It was then I felt I’d seen the show for real.