The artist shifts a digital landscape into three dimensions. 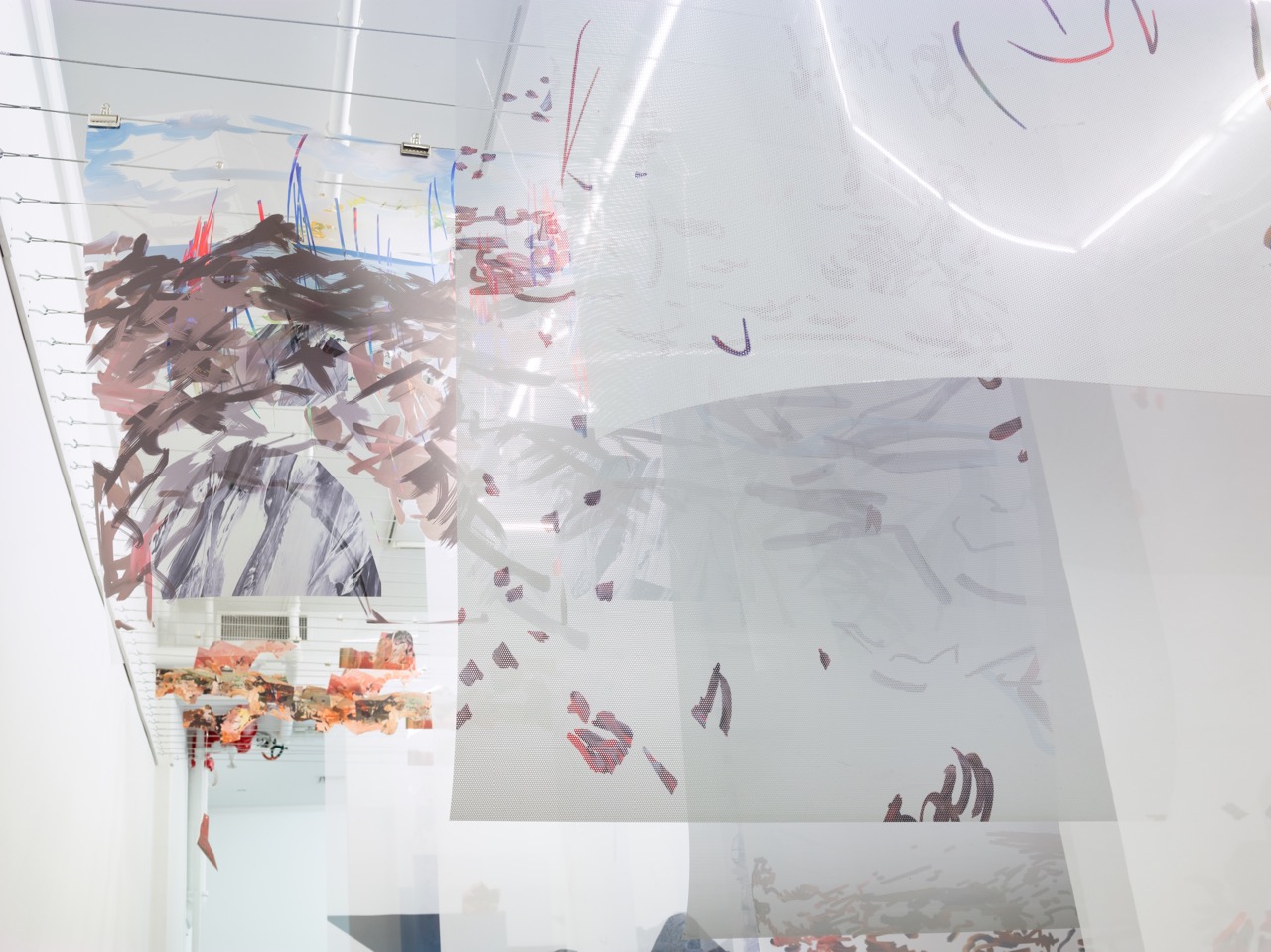 Almost three decades ago, music critic Ian Penman wrote that he wanted “to reclaim what is truly human (memory, lack, doubt, danger) through and in technology, when it otherwise threatens to evaporate in the blurry oasis of modern marketing.” A similar desire stirred my fascination with the net art generated back in the 1990s: I was thrilled by the ways artists rearranged systems to create what seemed like brand-new, deeply personal worlds in the weird corners of the internet, worlds built in and through technology that were filled precisely with memory, lack, doubt, and danger. The accelerating gentrification of the internet soon anesthetized that tingle of peril, though, prompting my own generation of internet natives to begin making a different sort of work in the late 2000s. Coined “postinternet art,” it provoked a frenzy of critical hysteria—largely motivated by laments that its practitioners were in fact disappearing the human into the ever-encroaching, filmy realm of branding.

The critique (which was certainly robust, if a shade supercilious) held that instead of challenging or resisting the corporatized networking of our lives, postinternet art simply mirrored the status quo with a dead-eyed indifference. Petra Cortright would become one of this critically suspect scene’s shining successes, and indeed, a resolute disinterest toward any kind of agenda or program has been central to her articulation of her work. But for another cohort of viewers, myself included, this very disinterest somehow entranced as much as the anarchism of the early web. 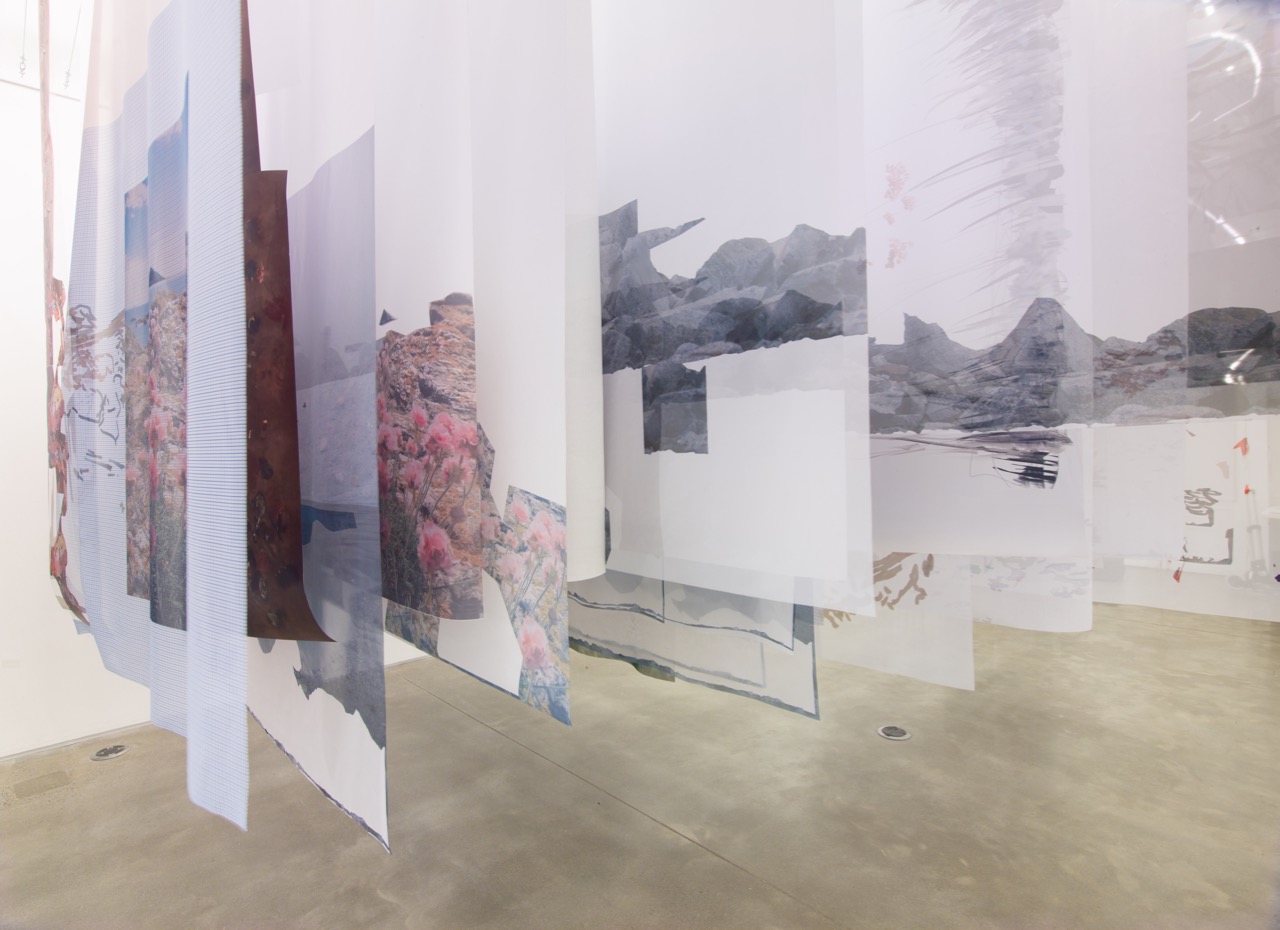 Cortright’s latest exhibition, borderline aurora borealis, presents a digital landscape painting that has been abstracted, deconstructed, and spatialized into a two-room installation. Its conceptual straightforwardness (Cortright says you shouldn’t have to read an essay to get the work) crystallizes the artist’s embrace of the attractive, the easily and speedily done, and the low-stakes. The installation is pretty and buoyant, an impression of the natural world as filtered through the lens of the internet, unfettered by theoretical frameworks or researched citations or political argument. “We are in a weird time, where everyone thinks everything has to make some kind of a commentary,” Cortright said in a 2018 interview. “I am ok with making something that is just an escape.”

Cortright has been creating digital landscapes since she was in her teens, when she first got Photoshop in 2003. She would spend hours playing with the different brushes and effects introduced with each new version of the software, bingeing on image searches to find comely low-res pictures that she would tear apart into pieces and gestures and re-layer into cute and appealing natural scenes. By the mid-2010s, she had moved away from her internet-based practice and started printing her landscapes onto materials like aluminum, reflective Plexiglass, and silk to create physical screenshots of any given moment in her Photoshop playtime that she found particularly pleasing.

In her new show, rather than pressing “pause” and giving us a flat fixed image, Cortright lets us literally walk through her frolicsome process. Taking the hundreds of source files that would normally coalesce into one image, she instead printed them out onto big sheets of industrial vinyl, transparent plastic sheets, Kodak photo paper, museum board, and linens. They’re attached with chunky metal clips to a series of cords stretched taut just under the gallery ceiling so that all those squares and rectangles hover ethereally in the middle of the room. It’s like we’ve become tiny and dropped into a humongous Photoshop interface where all the layers have been made visible and we have to toddle around them as if they were giant obstacles. 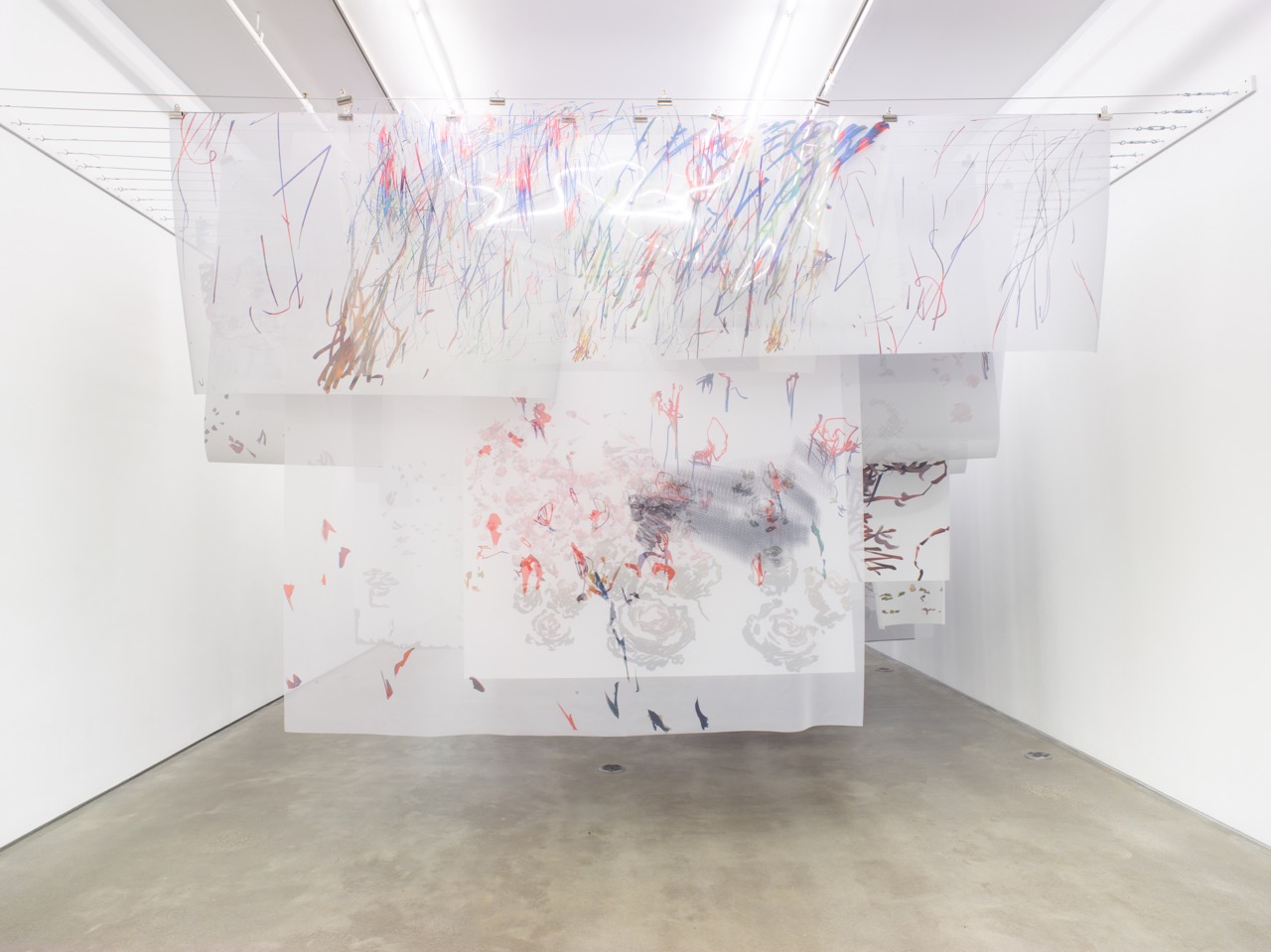 This is also to say that the work is hard to see. In the first room, facing the installation head-on, the thickly opaque sheets block the ones behind; only a few layers can be glimpsed at once. The sheets are hung close together, so that one has to crane and peer to view the images printed on them. Or they are hung so high up that one has to concentrate to make them out. I found myself using the camera on my phone to gaze bionically, zooming in through my screen on details that were difficult to otherwise descry. The images in question make up a field of isolated painterly gestures: a commotion of shaky lines on one panel, a smudge of repeated marks made using a special Photoshop brush on another. Some layers are simply flooded with color: a hit of toxic orange or strip of lucent blue. There are also found photos manipulated in different ways—grayscaled clusters of roses, a collaged wall of rocks. Passing through the room, all the different marks and icons come in and out of focus, merge and separate in your field of vision. 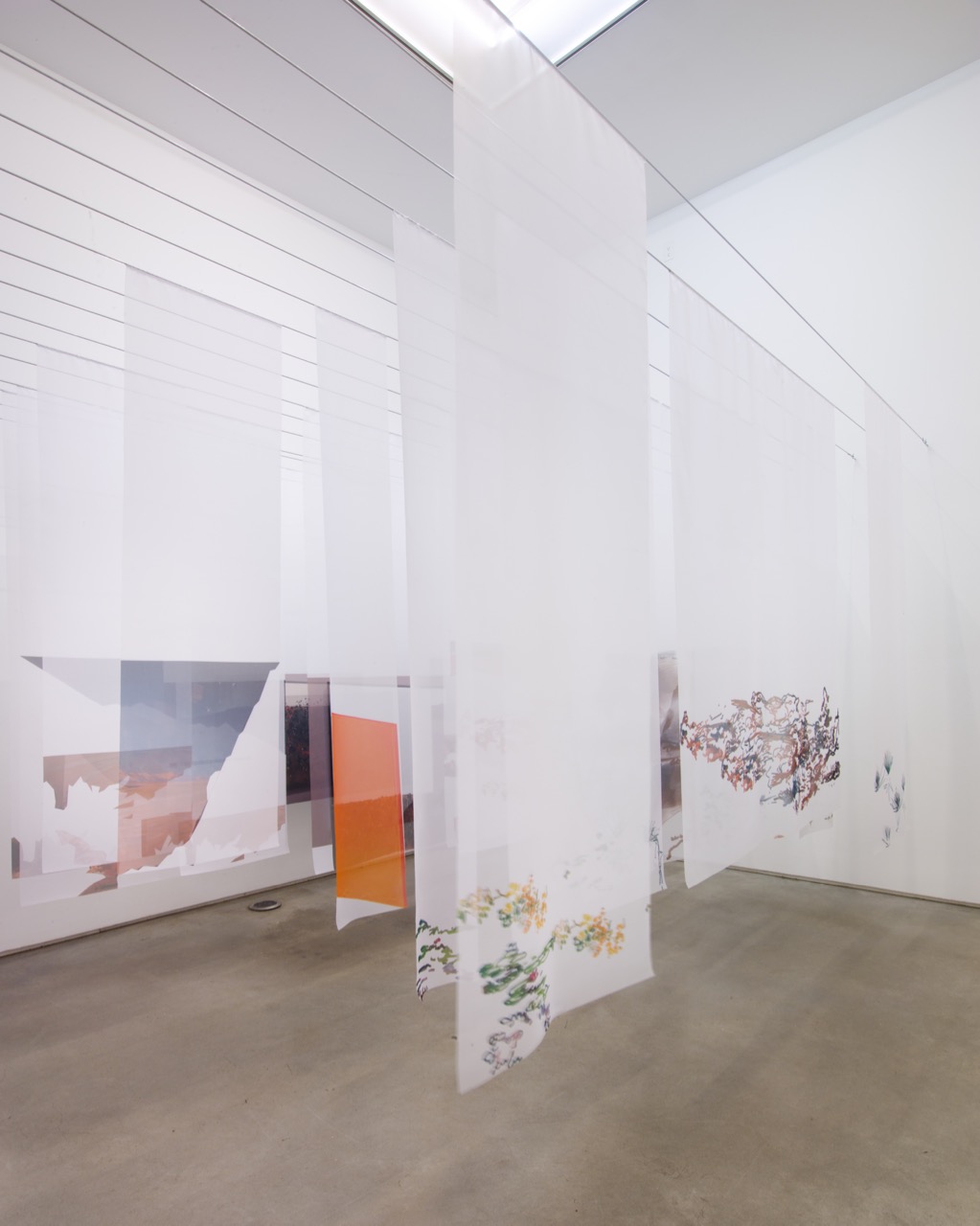 In the next gallery is another, smaller cloud of layers, this time mostly on translucent substrates. A projector slantingly beams onto them a squished video that dissolves into air when it gets cut off at the top of the panels. (The video exemplifies a recent practice Cortright calls “living painting,” in which she records her screen as she Photoshops her paintings and then plays the result behind the very works the videos show her assembling.) The projection injects the dangling surfaces—which are mostly still, except for when they slightly tremble or swoosh if someone walks quickly by them—with the luminosity and jittery motion of screen-based experience.

Though Cortright has described her work as “dumb shit” that she dashes off purely for personal pleasure, borderline aurora borealis, as straightforward as it may be, is still doing various things. It puns on our imagination of infinitesimal data streams (JPEGs, GIFs, and their brethren) as matter light or heavy, large or small; the prints appear both weightless (floating as they are, fluttering in currents of air) and ponderous, given their exaggerated size and the heavy-duty nature of the materials they’re constructed from. In addition, the piece throws into relief the limits of IRL perspective: while the flatness of the screen lets us see a lot of things all at once, and understand how they fit together, like puzzle pieces spread out on a table, in 3-D space there’s no such omniscient view. The viewer’s vision is constrained by their body’s physical relationship to the installation. Our hampered IRL gaze allows objects to guard their secrets more closely than in crystal-bright screen-space. 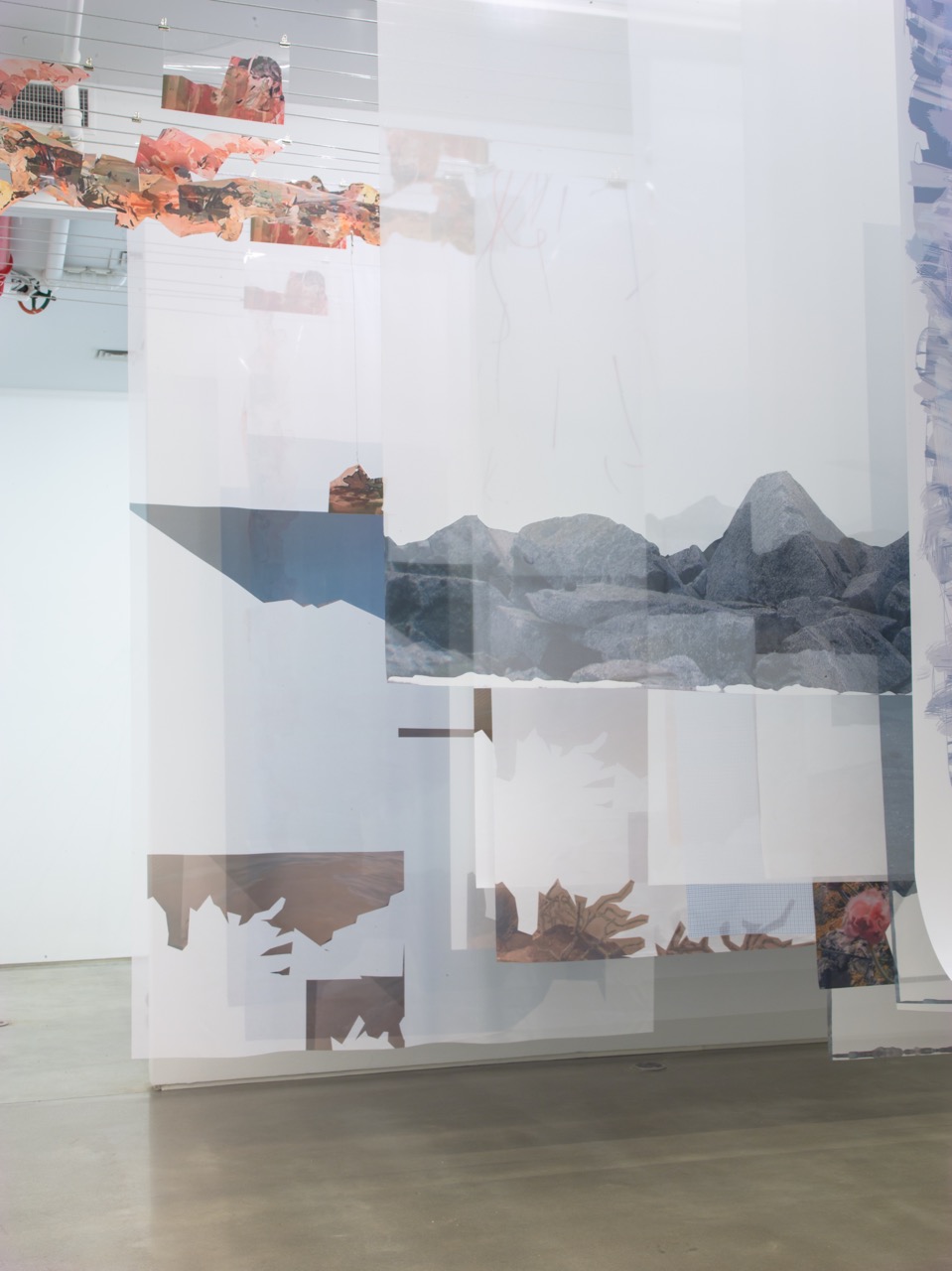 The work also mingles the indifferent with the personal in a compelling way—it both yields to depleted corporate-software aesthetics and is tweaked by idiosyncratic gestures (though ones still governed by the limitations of that software); it’s dispassionately formal but also infused with an intimate voyeuristic feeling of being inside someone else’s computer. borderline aurora borealis is composed of the banality of a certain kind of computerized everyday life. I was reminded of Tao Lin’s autofictions, which are all the more vulnerable for their rigid, voided, internety language.

Cortright has said she doesn’t want anything to be at stake when she produces a work, but as artist Paul Chan wrote back in 2010, “by representing this impoverished reality through form, [her] disinterested work wants us to reflect upon the poverty of it all.” The disinterested work makes stubbornly visible its refusal to care. I don’t think that’s complicit with the blurry marketing oasis at all; the latter wants us to care about it very much. The disinterested work turns our gaze away from the oasis’s alluring lights and reminds us of the barren elsewhere that remains.