Seasons, planets, and modernist tapestries from the veteran artist. 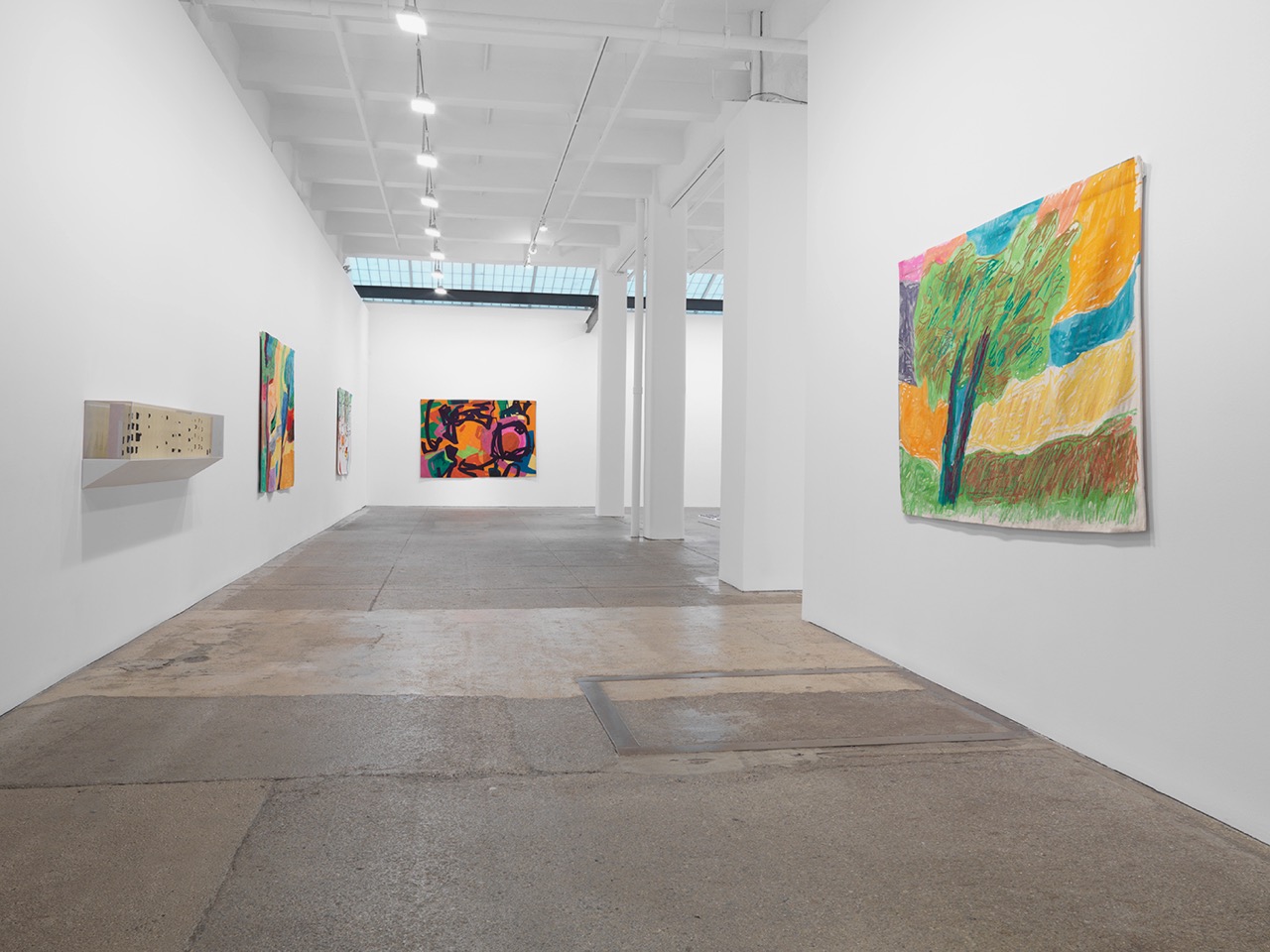 A poem’s jagged line breaks might suggest a Cubist painting, while drawings are likely the first form of writing. The connections between art and poetry are essential and consequential in the work of Etel Adnan, painter, poet, novelist, and playwright. Her themes and passions—color, history, love, landscape, the rigors of time and vitality of experience—permeate all of her work.

Born in Beirut in 1925, Adnan studied philosophy in Paris, then moved to California, where, for many years, she taught philosophy. All the while, she was writing and making paintings, becoming well-known especially for her writing, with books such as Of Cities & Women (Letters to Fawwaz); Paris, When It’s Naked; and In/somnia—all published by Post-Apollo, sculptor and life-partner Simone Fattal’s press.

Adnan’s imaginative language, her ear, her intense engagement in home and history, and innovative textual play mark her poetics. She is a profound and compassionate thinker, who is prized among poets. These lines are from “Celestial City”:

The sun’s setting over a setting empire

there’s growing hunger over the

By pairing the two kinds of settings—sun’s and empire’s—Adnan fuses the “course” of history with the sun’s. Culture and nature both produce “hunger over the land,” and people exist in the interstices of this dyad.

Concision of images and ideas is prominent in Adnan’s literary oeuvre, just as it is in her visual work. Her paintings—landscapes of vivid, horizontal bars of colors; a glowing sun, full and round, perched on a horizon line—might appear unlike her cerebral poems, but her paintings’ stark simplicity is equivalent to her writing’s economy.

Differences respond to their mediums: words do what a painting can’t, a painting does what words can’t. Adnan has written: “Materials, for artists, are things that mediate thought . . . condition one’s aesthetic choices . . . They become in a way a co-author of one’s work.” The medium, in a wry sense, creates the message, or “mediate[s] thought,” as Adnan puts it. She calls a leporello a “folding book.”

In Adnan’s current exhibition at Galerie Lelong, a leporello stands in a vitrine. Stretched open, its flattened-out page-like divisions allow it to be read like a text. A leporello, unfolded, creates horizontal movement: a viewer starts here, ends there, and time passes. Like a book, the artwork can be reread, or read from the middle to the start or to the finish.

Her 2020 paintings, the two series Les quatre saisons and Planètes, are verticals, and play differently with the eye. Tension builds from top to bottom, bottom to top. In each of the four season paintings, a band of white anchors the canvas. Black streaks arise upward from the base into dabs and strokes of seasonal color. That seeming emptiness, that band of white at the base, lifts the seasons, metaphorically, off the ground, as if cut off from the natural order. 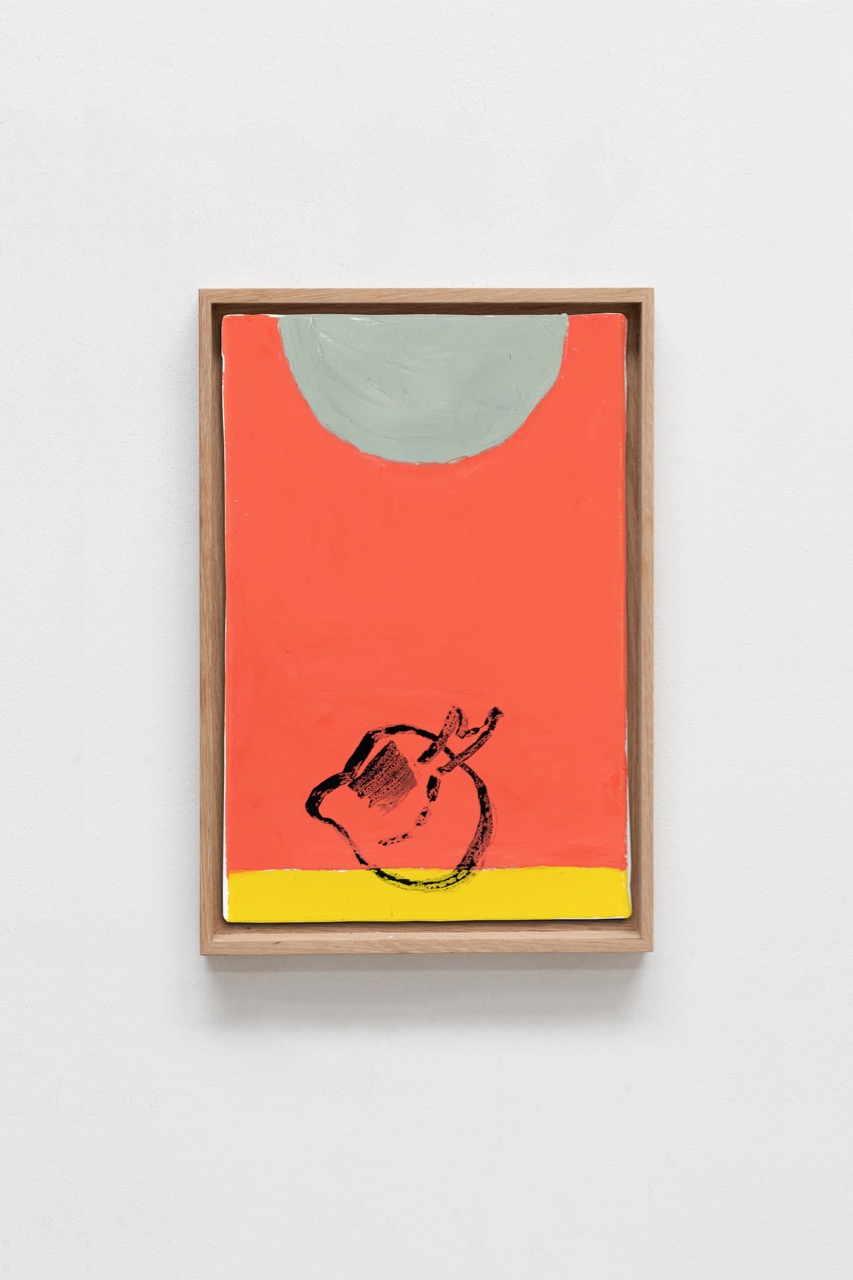 Each Planète has a central, round shape; Adnan’s beloved sun is here, though none is yellow or golden. Each painting’s sun is different: deep orange, aqua, gray, or dark green, all set against different backgrounds: aqua on lime green, the other three on various shades of orange. Three of the suns nearly touch the sides of the painting, while the gray one is not full, a sun setting at the top of the frame. An amorphous shape lies beneath three of the suns. In one, a bicycle sits beneath it, as an inscrutable sign, although a bike suggests childhood, movement, and play. 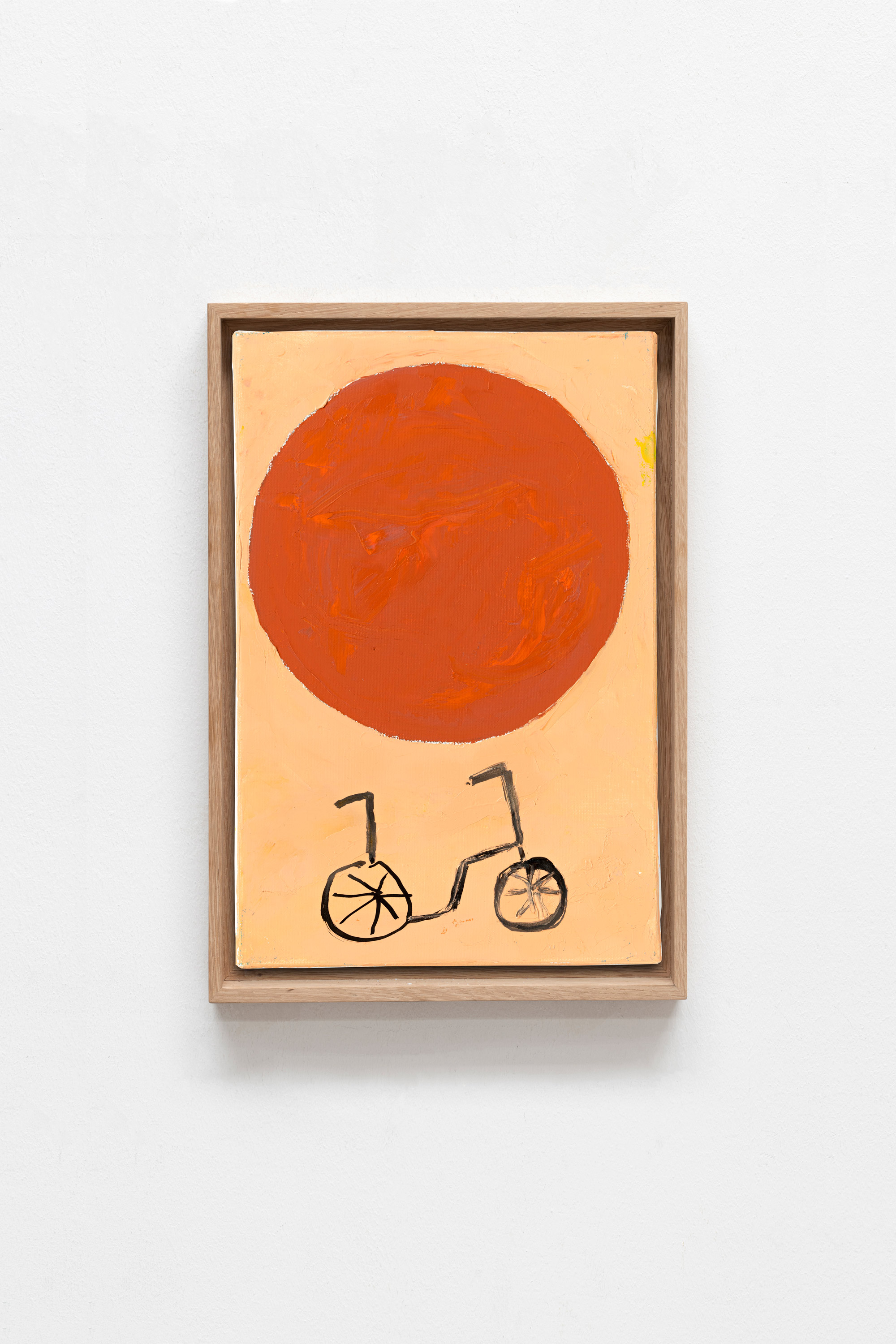 Adnan’s boldly colored tapestries dominate the exhibition. From childhood, Adnan treasured Persian carpets, and, since the 1960s, has made tapestries from her designs. None completely satisfied her. Now living in France, she has had her tapestries manufactured by the famous Aubusson atelier Pinton. Pinton has been creating tapestries since 1867, and is associated with Aubusson tapestries, which date to the fifteenth century. 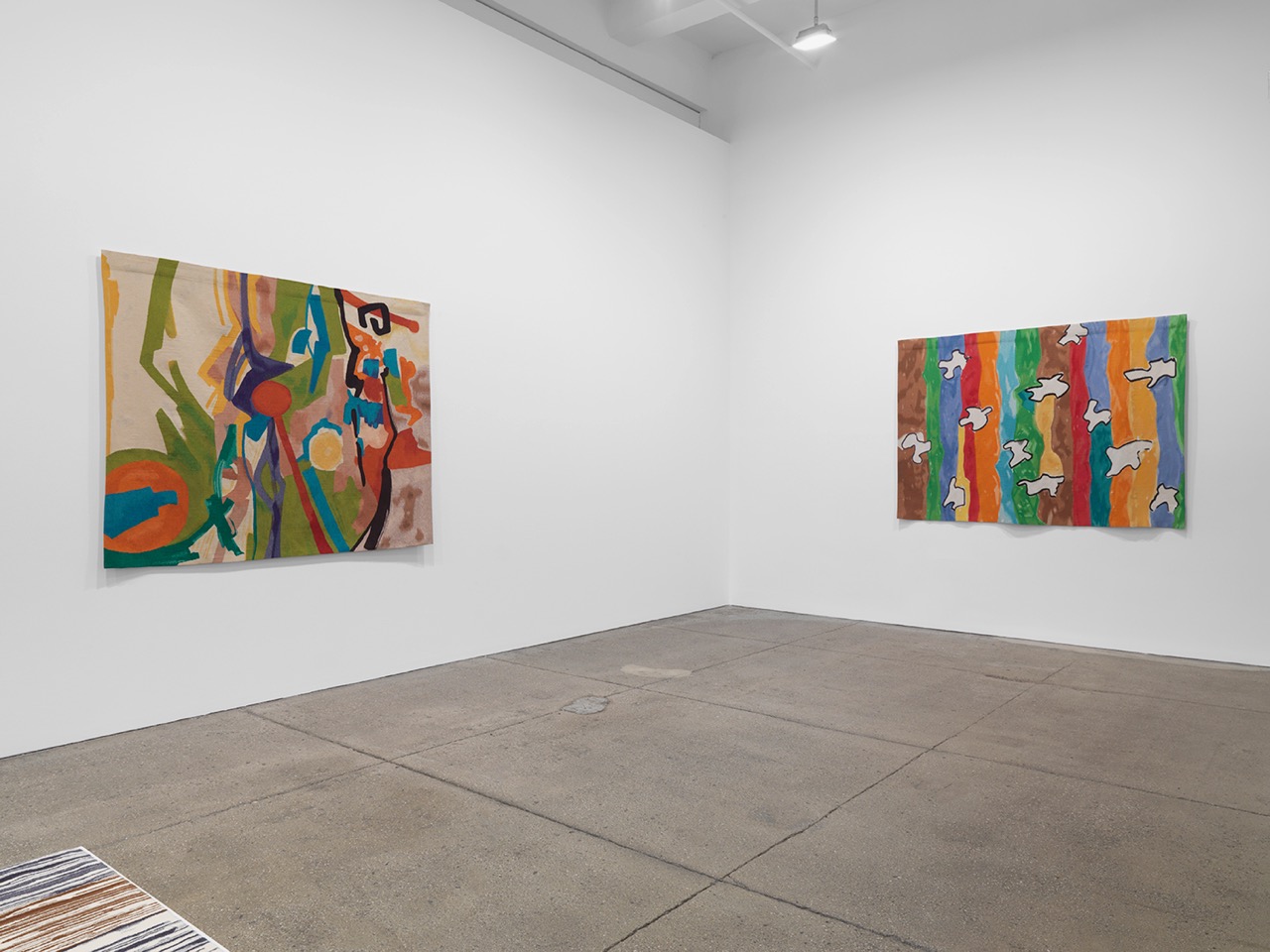 Her tapestries are woven modernist paintings, and unique in her oeuvre. They are large, about six feet by seven feet, when much of her work is smaller. From afar, they appear to be wall paintings; up close, they are textured wall hangings, weavings of thick wool. Most amazing, each strand seems to have been hand-colored, and, like an oil painting, there are underpaintings—earlier color decisions or strokes peer through the surface. 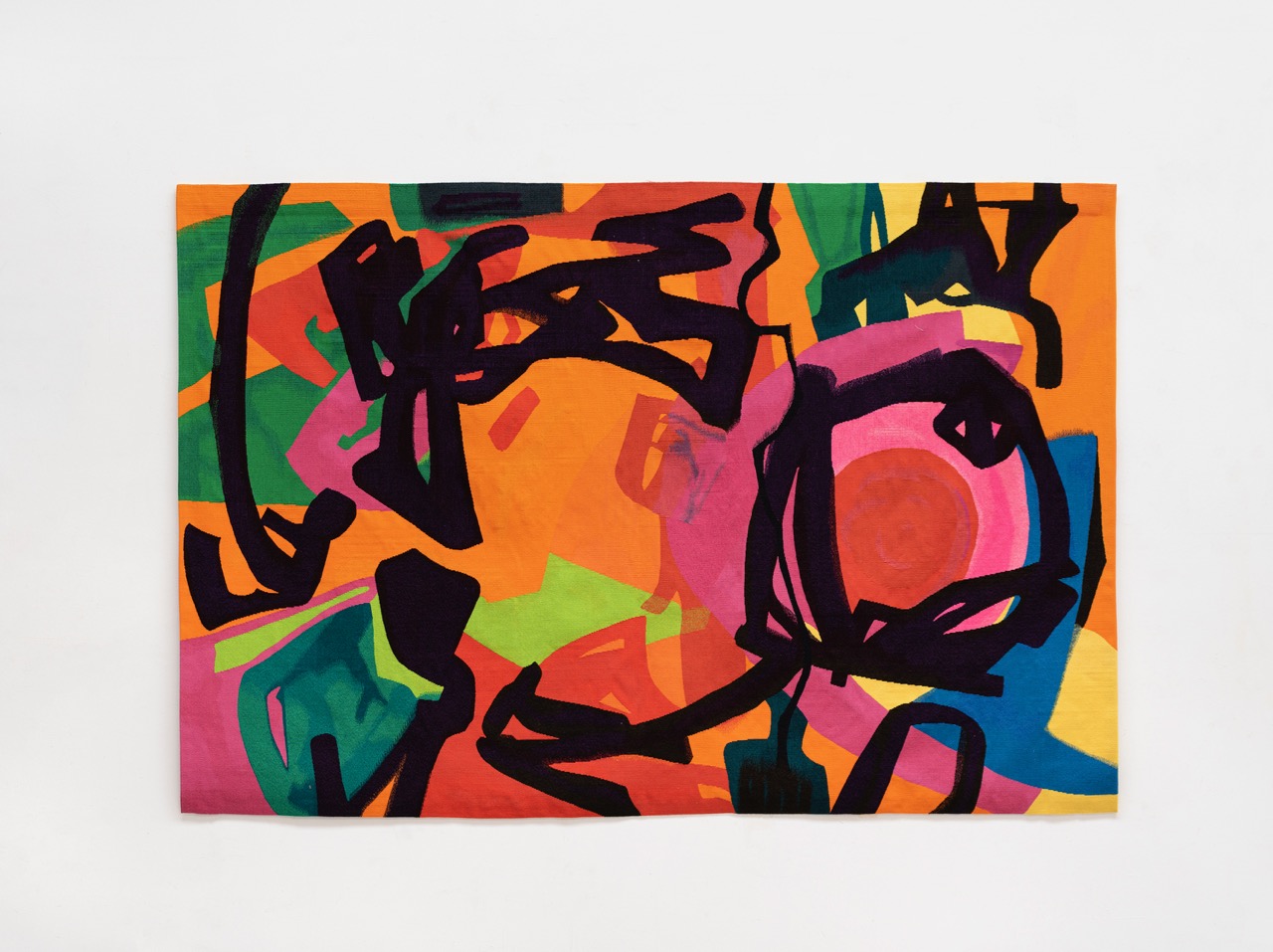 Metaphorically, weaving draws loose ends together. It is a complicated form, composed of many pieces that are meant to unite. It creates a pattern of inseparable parts. Weaving is a way to consider entanglement, say, of love and hate, of small events and great ones, of an individual in culture. 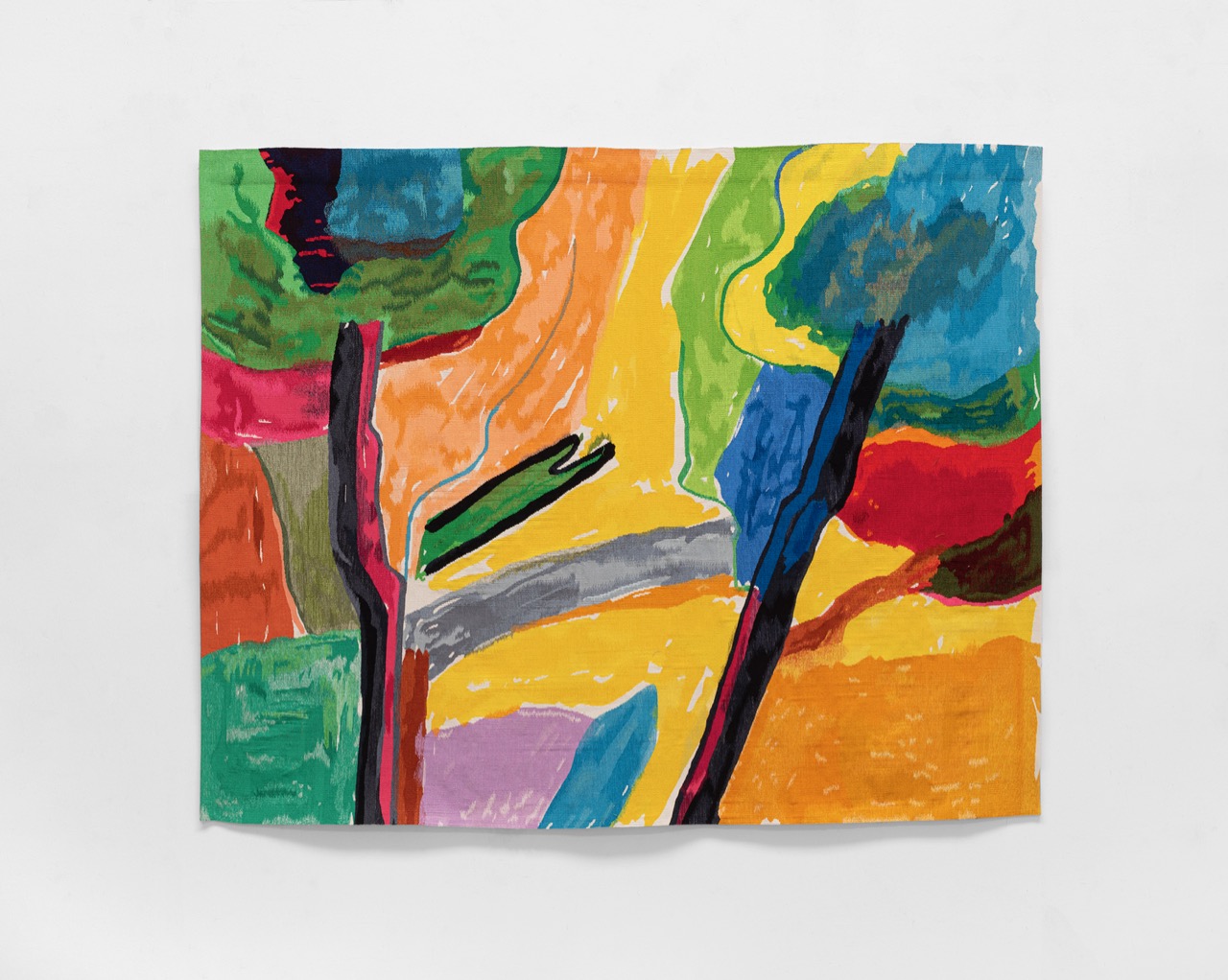 Adnan titled her essay about how she came to do this work “Life Is a Weaving.” “A weaving” is one of a multitude, not “the” only one. There are many ways and approaches, many versions of society and culture, many kinds of poetry and art. Life wears a coat of many colors. A Bible story could be a line in a poem, and an ancient tradition can make things new or renew them.

I want to applaud Etel Adnan. And contemplating her art, her writing, I don’t want to cater to truisms about wisdom and age. It is not age that brought her wisdom. She thinks deeply and sees what others don’t or haven’t. Adnan uses her experience, everything she has learned and learns, and tells us about it. She is a loving explorer of life, and the world is more wonderful with her art in it.

Lynne Tillman is a novelist, short story writer, and critic. Her most recent novel MEN AND APPARITIONS was published by Soft Skull Press in 2018. Her story “Plague days” appeared in LitHub last March; another story, “The Dead Live Longer,” appeared in n+1 magazine in the summer.