The way of the gun: Paul Auster’s new book draws a line through history from America’s founding to present-day mass shootings. 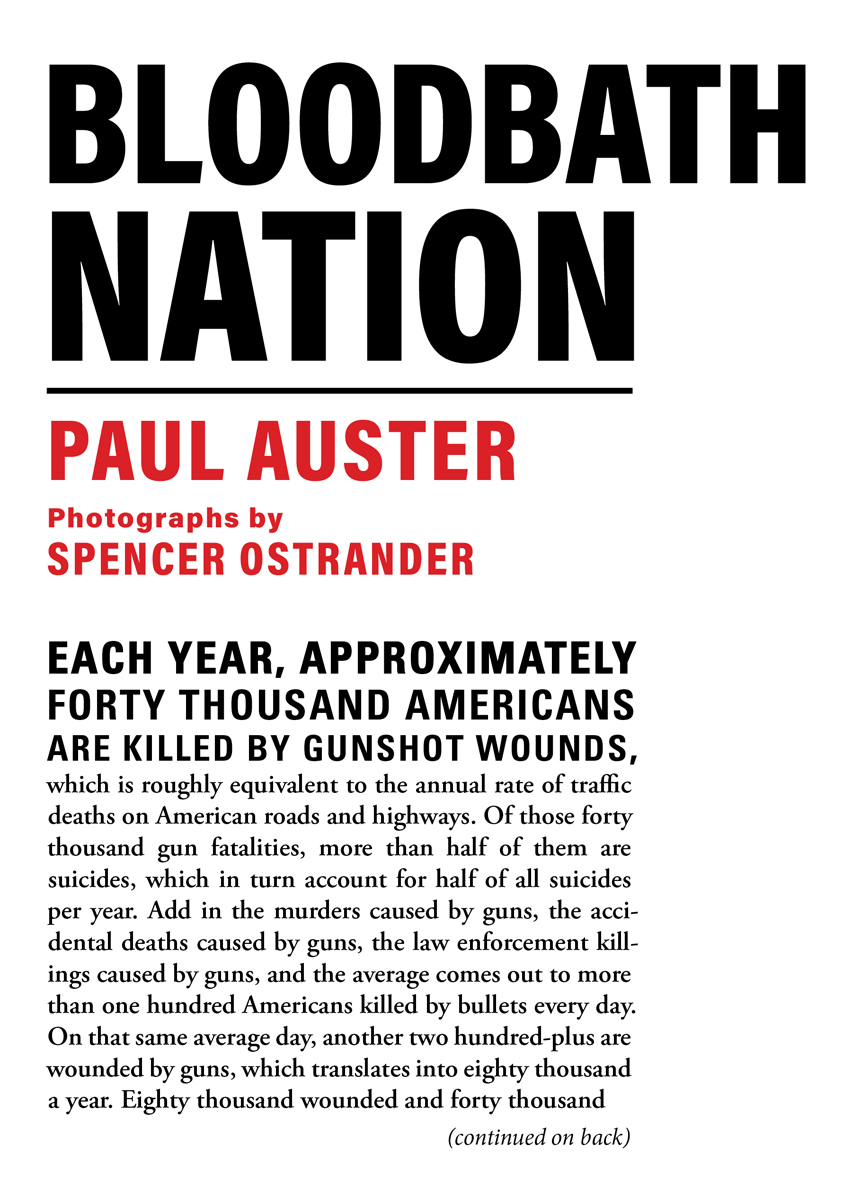 Paul Auster’s Bloodbath Nation is a short book—one hundred sixty pages, many of which are taken up with photographs. In the day and a half it took me to read it, there were four mass shootings in the United States. These do not include the murder of six at a Walmart in Chesapeake, Virginia, the day before I started Bloodbath Nation, or the pair of shootings in Atlanta, including one in which two teens died, on consecutive days after I finished it. In 2022, there were more than six hundred such shootings across the country, so this sample is hardly an anomaly. “Your knees buckle,” Auster asserts, “at the sheer amplitude of so much senseless carnage.”

As a meditation on American gun violence, Bloodbath Nation seems an odd book for Auster to have produced; he is known as a novelist, after all. Still, for all the inventiveness and range of his fiction—I remain a devotee of The New York Trilogy, as well as a number of the later novels, including The Brooklyn Follies and 4 3 2 1—he has long been a sneaky nonfictionalist, as well. His first book of prose, The Invention of Solitude, published in 1982, is a kind of inverted memoir, addressing the death of the author’s father through the filter of his silence. Forty years later, Bloodbath Nation, too, begins with that remote parent, whose reticence, it happens, grew out of a tragedy he had experienced as a six-year-old living in Kenosha, Wisconsin, where on January 23, 1919, his mother shot and killed his father, from whom she was estranged. “When we talk about shootings in this country,” Auster writes, “we invariably fix our thoughts on the dead, but seldom do we discuss . . . the victims whose bodies were never touched by gunfire but who go on suffering from the inner wounds of loss.”

Auster’s purpose here is to make the calamity of gun violence personal before he turns to the statistics, which are numbing: “393 million guns currently owned by residents of the United States”; “more than one hundred Americans killed by bullets every day.” What are we to do with this information? It’s no wonder many want to turn away. “Bloodshed and death on this scale and at this level of frequency,” Auster observes, “would seem to call for national action, a concerted effort on the part of state, federal, and municipal governments to control what by any measure of rational understanding is a public health crisis.” And yet, “America’s relationship to guns is anything but rational.” 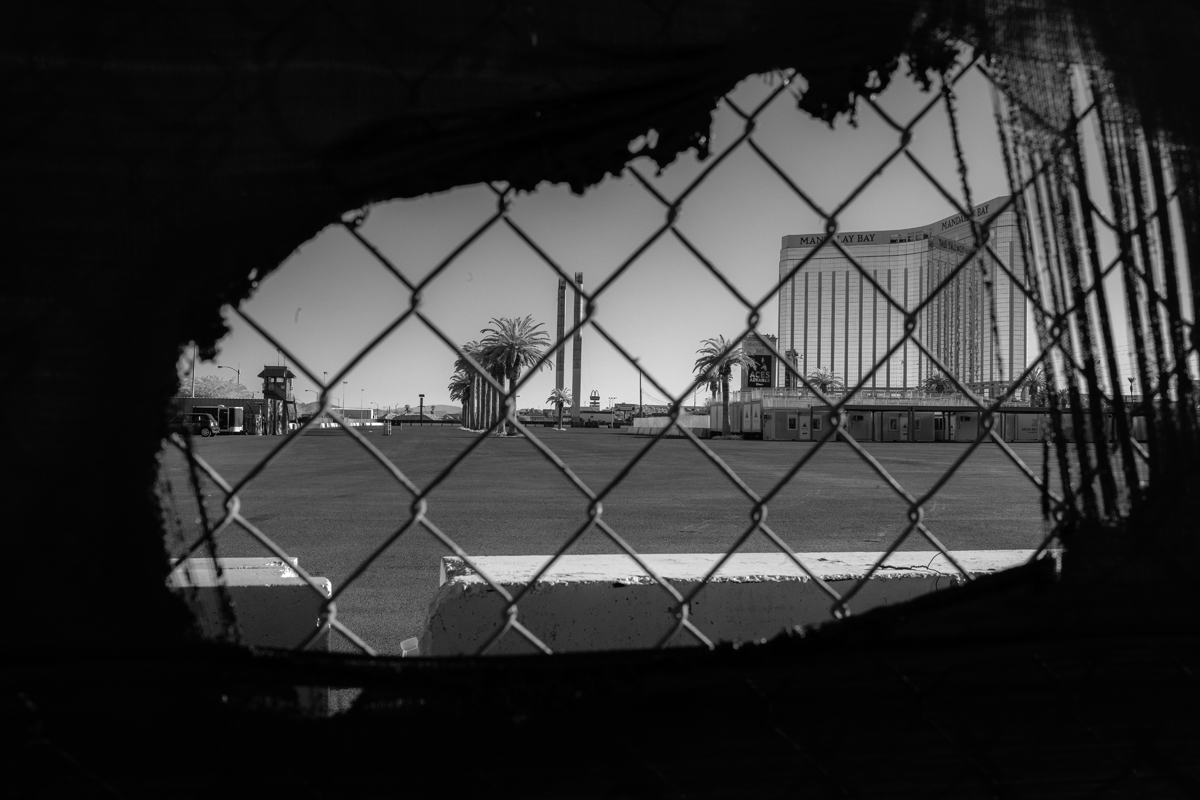 There’s nothing revelatory about that statement; a lot of us recognize its veracity. Auster, however, is not interested in the standard us-and-them narrative of guns in the United States: the Second Amendment absolutists or those who oppose them, the tired arguments about right and wrong, left and right. Rather, he means to take a more historical (which is to say: narrative) perspective. Writing in broad terms—Bloodbath Nation may best be read as a series of sketches—he suggests that guns were considered a necessity in “our colonial prehistory,” not only because our experience under British rule provoked a collective antipathy toward maintaining a standing army, but also (and more essentially) because the era was one “of unending armed conflict,” in which a primary intention was the subjugation and extermination of Indigenous peoples. 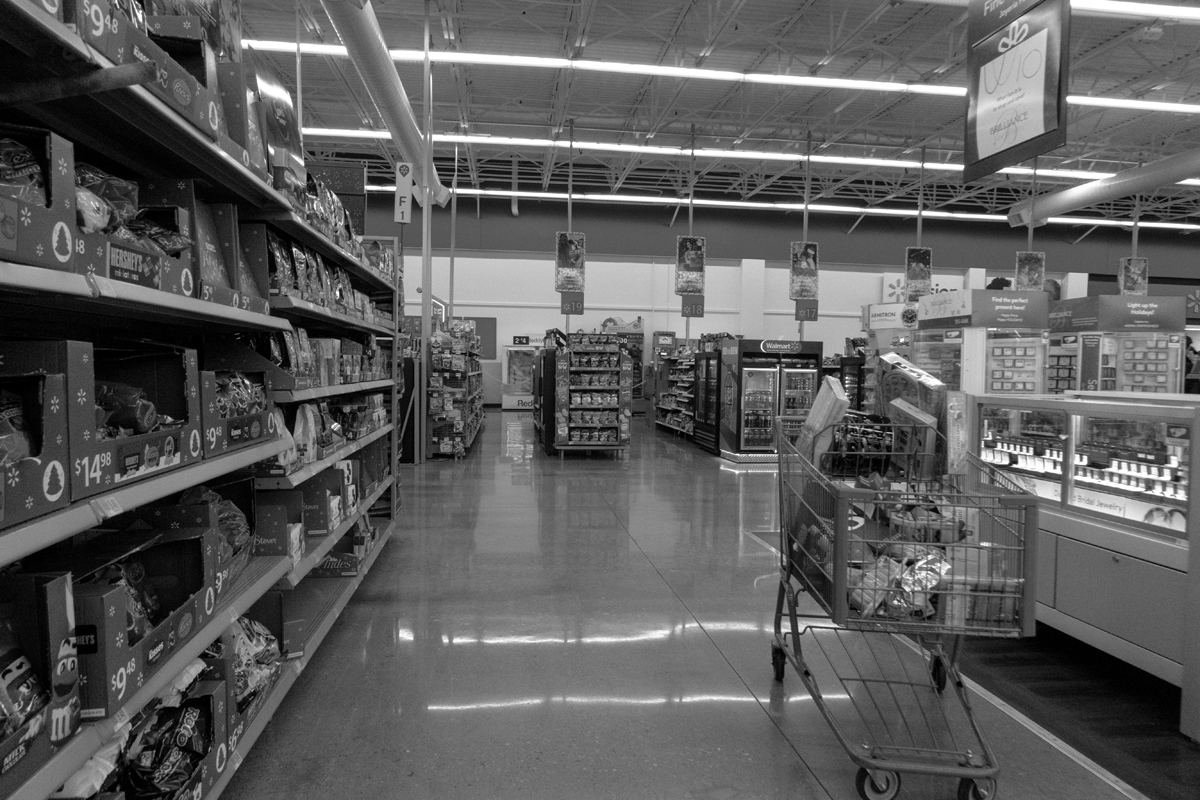 In this way, Auster reminds us that much of the rhetoric about guns revolves, as it has all along in this country, around race and policing: “When white slavers from Barbados began moving to South Carolina in the 1670s, they imported the practices of slave management they had already established in their former home, among them the creation of a militia force known as the slave patrols.” These patrols “constituted the first police forces in America, and until the end of the Civil War, they functioned as a kind of Southern gestapo.” This history is what makes our current circumstance so troubling. Cops shooting Black motorists at traffic stops, in other words, goes back to the very origins of American identity. In that sense, a gun is not a tool or an instrument of self-protection. It is an emblem of slavery and oppression: America’s original sin. 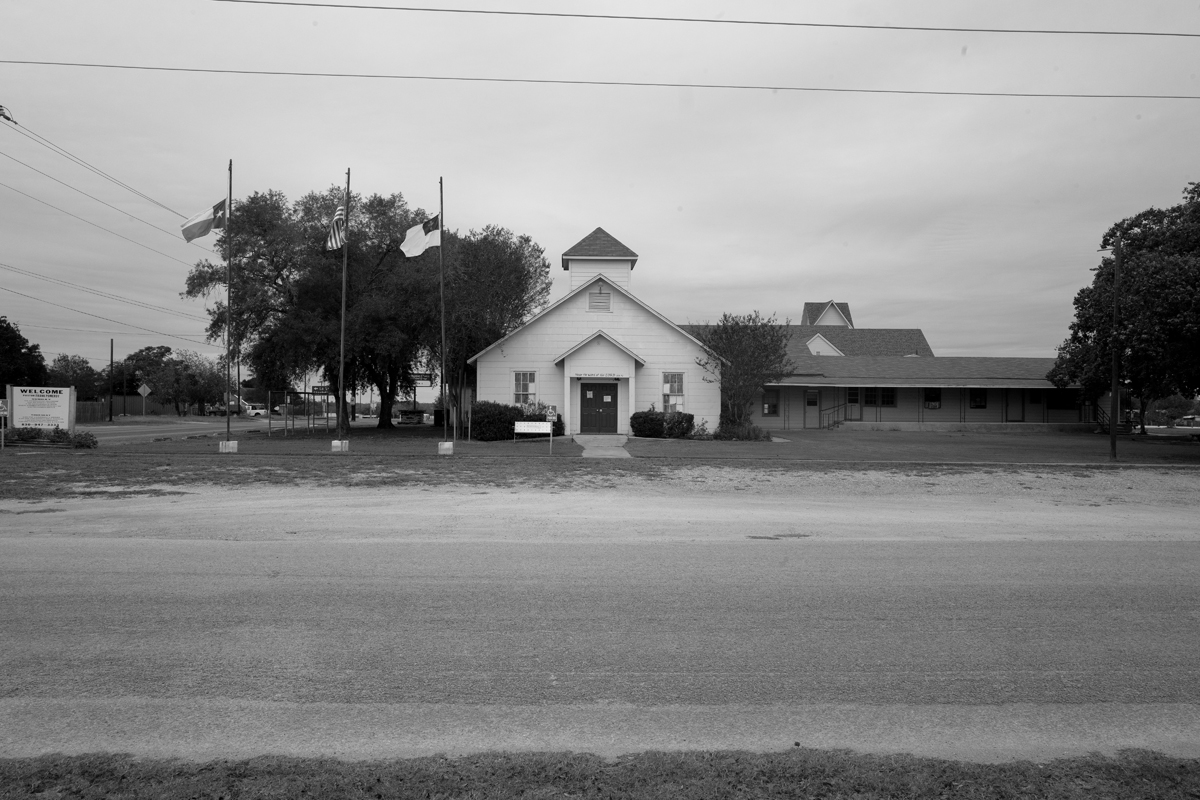 First Baptist Church, Sutherland Springs, Texas, November 5, 2017. 26 people killed, 22 injured. The church has been closed for religious services since the day of the shootings. The sanctuary has been turned into a memorial for the victims. From Bloodbath Nation. Photo: Spencer Ostrander. Courtesy the photographer.

As for what this means in the present, Auster admits he has no answers—or none that are sufficient anyway. “Peace,” he argues, “will break out only when both sides want it, and in order for that to happen, we would first have to conduct an honest, gut-wrenching examination of who we are and who we want to be as a people going forward into the future, which necessarily would have to begin with an honest, gut-wrenching examination of who we have been in the past.” In the meantime, all that’s left is to bear witness, which further validates Bloodbath Nation’s narrative approach. The stories Auster shares belong to every American, an idea further underscored by the generic documentary-style photographs by Spencer Ostrander featuring locations where mass shootings have taken place. These include the Safeway supermarket parking lot where US Representative Gabrielle Giffords was shot (along with eighteen other people, six of whom died) in Tucson in 2011. They include the Walmart in El Paso where, in 2019, a twenty-one-year-old white nationalist killed twenty-three people, mostly Mexicans and Mexican Americans, in a racist rampage. Most chilling are the houses of worship (First Baptist Church in Sutherland Springs, Texas; the Tree of Life synagogue in Pittsburgh) and the workplaces and nightclubs. 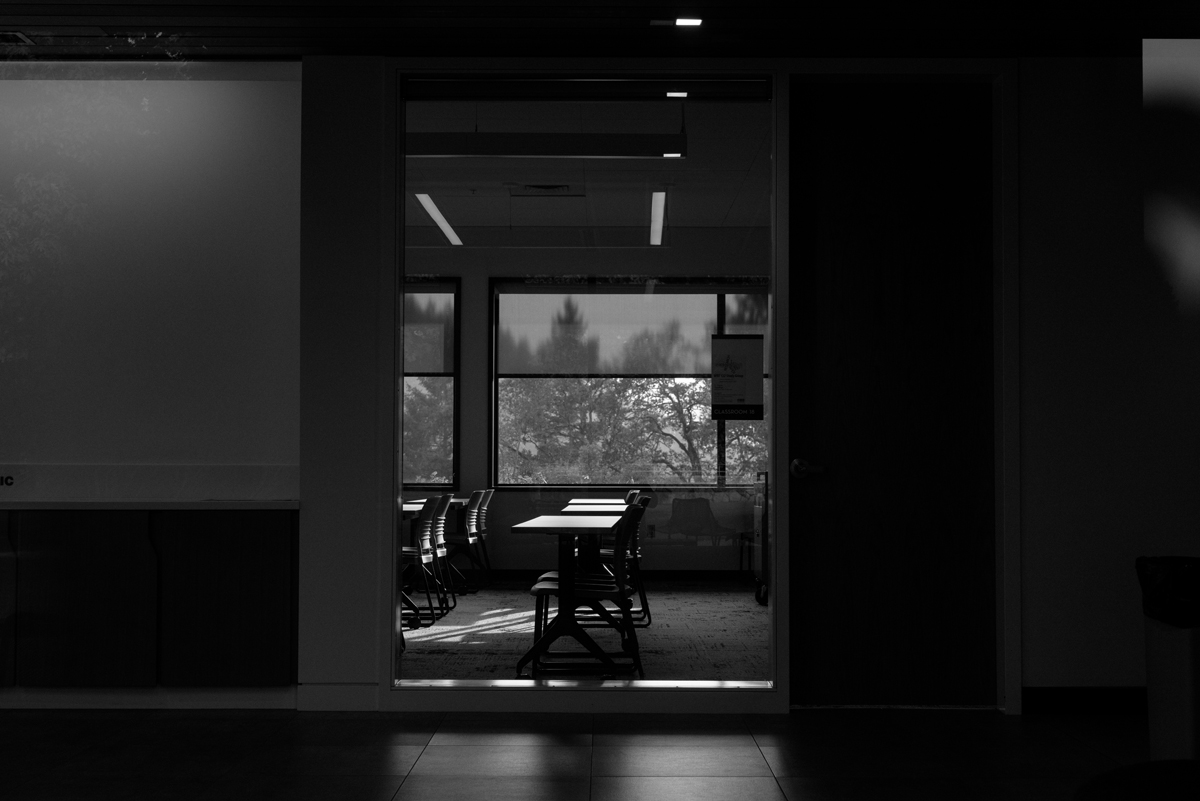 Umpqua Community College, Roseburg, Oregon, October 1, 2015. 10 people killed, 9 injured. The building where the shootings took place was torn down, and a new structure was built on the site. From Bloodbath Nation. Photo: Spencer Ostrander. Courtesy the photographer.

Ostrander contributes forty-one images, each in its way as riveting as Auster’s text. Why? Because all of us living in America have been there: that supermarket aisle, that sidewalk, that classroom. We are all going there today. This, of course—as the author recognizes—is the crux of the matter, that we are the problem we cannot solve. The power of Auster’s book is that it never blinks in articulating this dilemma, that it doesn’t let anybody off the hook. Gun violence in the United States is a collective problem, after all—which also means, as Bloodbath Nation argues so compellingly, that it is a collective responsibility.