In a solo exhibition, the artist takes back the screen. 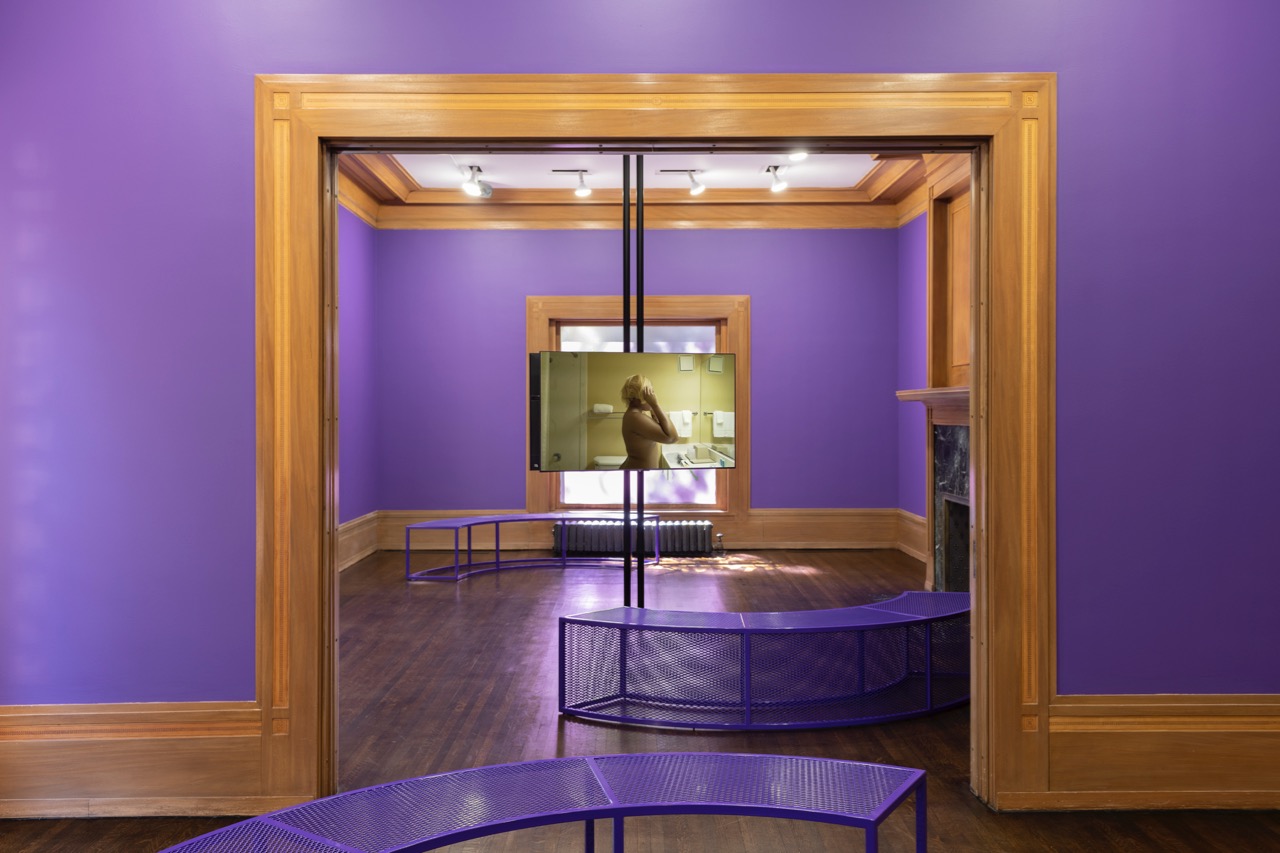 A funny thing happened while I was researching Martine Syms, whose solo exhibition, Incense Sweaters & Ice, is currently on view at the Graham Foundation in Chicago. The thirty-year-old artist, who lives in Los Angeles, is something of a hot ticket these days, with standout turns in big group exhibitions like the Hammer’s Made in L.A. biennial and the FRONT International triennial in Cleveland. The odd thing was this: nearly all of the substantial press Syms has received over the past few years has been interviews. And in the educational video for her Projects 106 at the Museum of Modern Art in 2017, where much of the Graham work premiered, it’s the artist herself who does the walkthrough.

Syms grew up in the LA suburb of Altadena, was partly homeschooled, and graduated at the precocious age of nineteen from the School of the Art Institute of Chicago, where I teach. Right before finishing school, she and a classmate opened Golden Age, a tiny and beloved artist bookstore, a type of space that otherwise did not exist in the city, and after closing up shop five years later, she moved back to LA and founded Dominica, a publishing company dedicated to exploring blackness in visual culture. Add to this brief biography the vital consciousness of Black Lives Matter and the incessant self-documentation of social media, plus a dash of celebrity culture, and a career of great timeliness emerges—one in which the artist has taken over the position of commentator. What’s noteworthy is how the factors that have made it possible for Syms to set the terms of her art’s reception dovetail so neatly with the artwork itself. 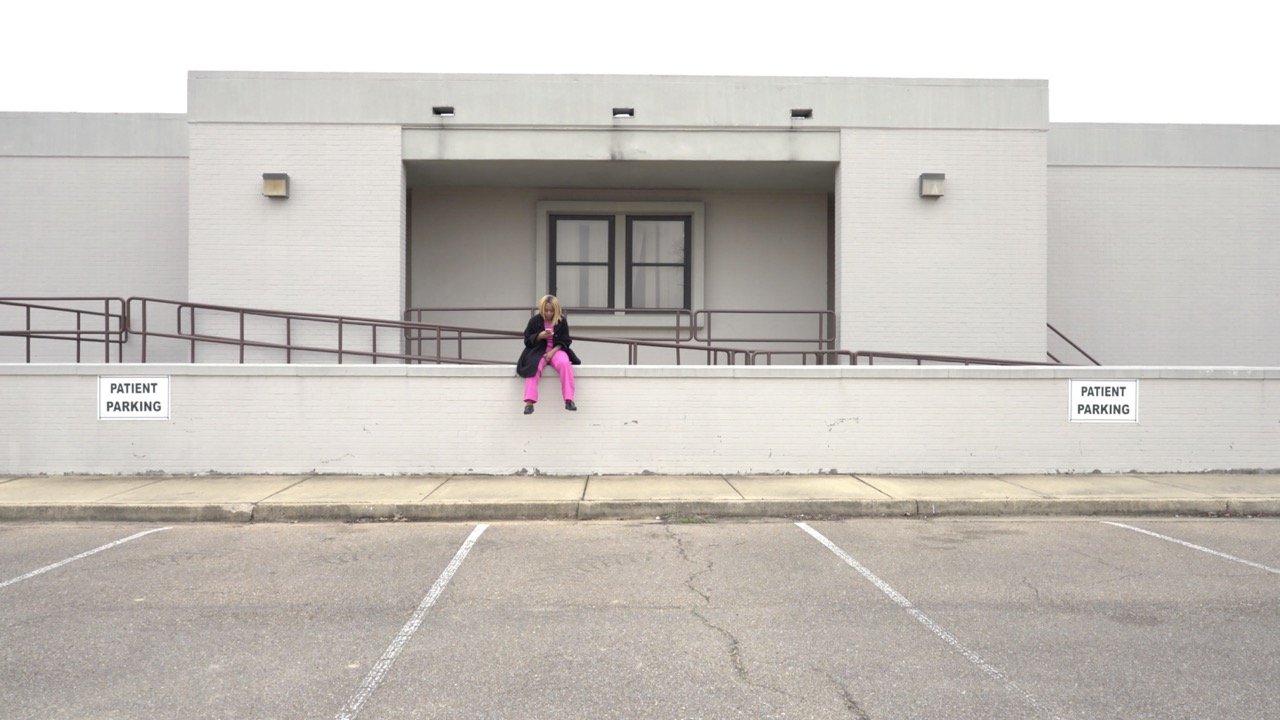 Incense Sweaters & Ice is first and foremost a nonlinear sixty-nine-minute film that follows Girl, a young black traveling nurse (played by artist-choreographer Katherine Simóne Reynolds), from LA through St. Louis to a job at a clinic in Clarksdale, Mississippi. Along the way there are quiet moments reading an experimental semi-autobiographical novella on a couch; a flirty first date with WB (White Boy) at a hip restaurant; a flea market full of old photos and clothing; goofy singing in a karaoke bar; a cozy and jovial family dinner; a visit to grandma’s tchotchke-filled house; elaborate hair and body care in a generic hotel room. Making them feel even truer, these scenes of everyday realism are shot from multiple points of view, suggesting the plenitude of recording devices we live amid: surveillance cameras, iPhone cameras, head and body cams, even dashboard cams. The foil to all this realism is a series of meticulous shots of a bygone sound stage on which Mrs. Queen Esther Bernetta White, an indomitable middle-aged matriarch (performed by jazz singer Fay Victor), trills dated advice about self-presentation for aspirational black people. 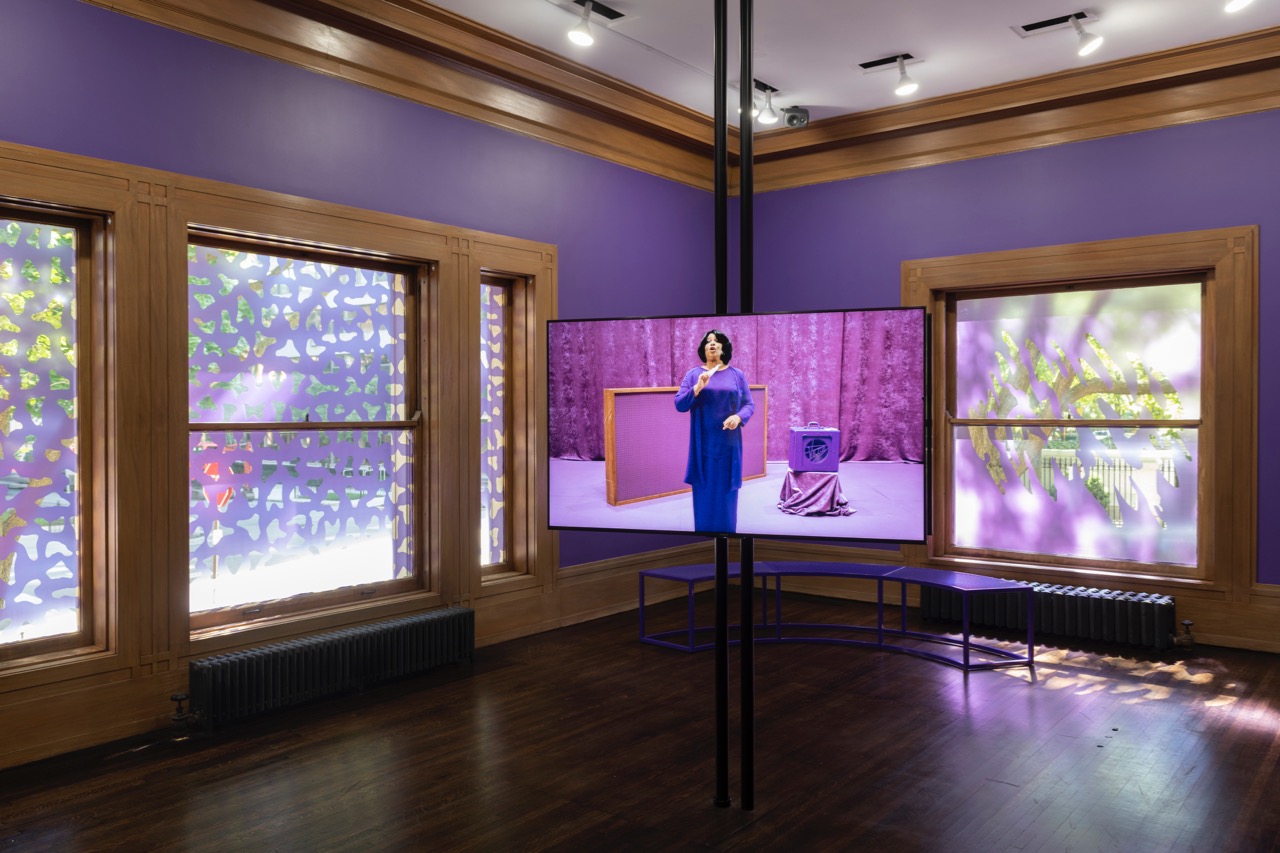 Incense Sweaters & Ice is also a cinematic installation that expands beyond one screen, one surface, one room. The film is split up scene-by-scene, each segment shown sequentially on one of three monitors that cannot be viewed from a single vantage point. Watching the movie thus requires the viewer’s near-constant movement, a situation that annoys not unlike the multitasking of contemporary life. It echoes Girl’s geographical journey, itself a reversal of the Great Migration, when African Americans of the rural southern states moved to the cities of the north and west. But mostly the piece expands by way of the color purple—yes, as in Alice Walker’s 1982 novel about the life of African American women in the south in the 1930s, where purple is independence and pleasure, but bruises too. At the Graham, purple replaces the black screen in between the film’s scenes, paints the downstairs gallery walls and benches, tints the patterned window filters, and does up Queen’s entire set and ensemble. If you don’t get this color, perhaps try harder. 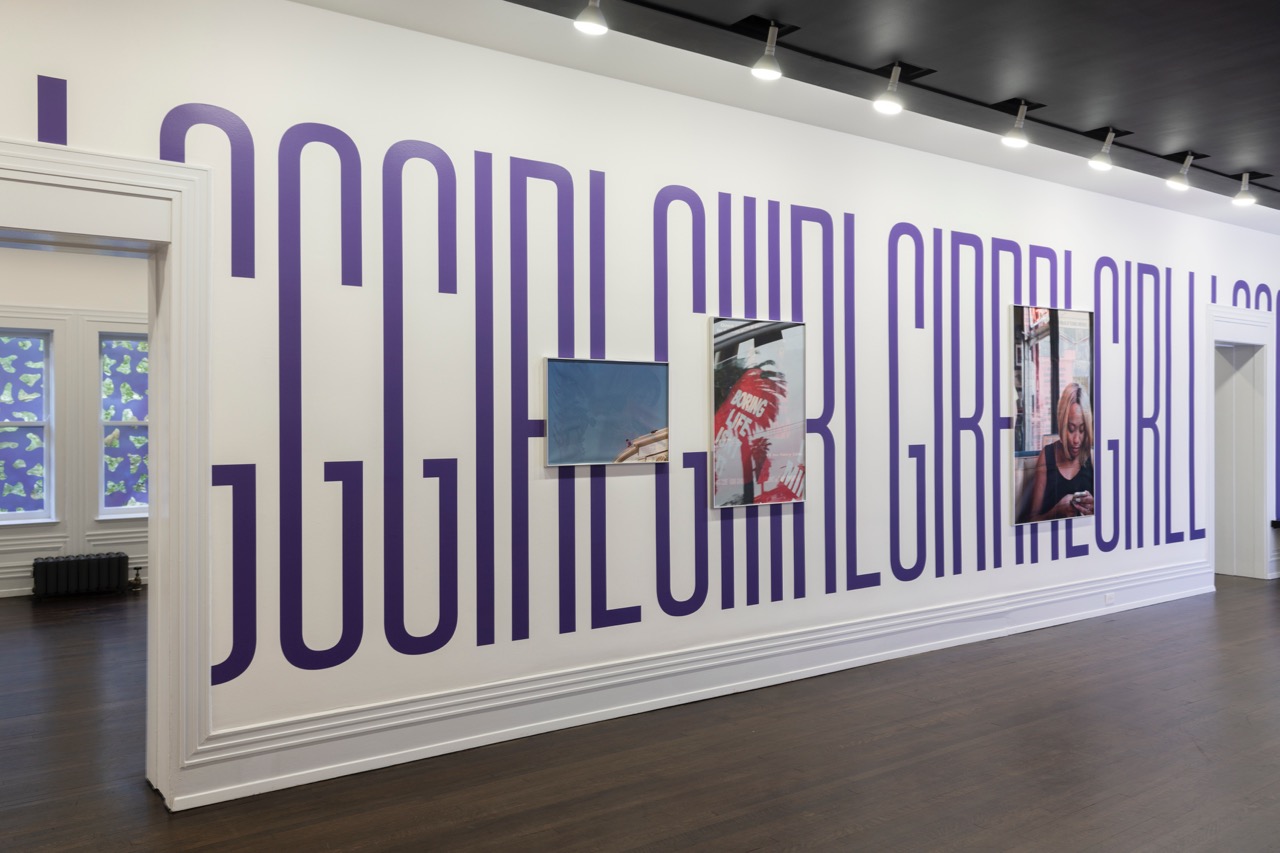 Upstairs, more purple: the walls are white but covered in seven-and-a-half-foot-tall purple letters spelling variations on “girl,” as in “Hey, girl!” and Riot Grrrl and a few others in between. Across those words hang a dozen framed posters for films targeted to African Americans, with titles like Boyz n the Hood and Truck Turner overprinted to varying degrees of opacity with Syms’s own photographs. When viewed through wyd rn?, a phone app created with her studiomate Brent David Freaney (who also acts as WB in the film), the compositions populate with various sorts of data. Syms’s glamorously blurry image of a woman holding a mic comes alive when a soulful acapella tune sings out. Scrolling text conversations (including the eponymous acronym, which stands for “what you doing right now?”) seem as if undertaken live by the woman pictured in a diner, engrossed by her phone. A series of overlapping GIFs of Tyra Banks and other black women celebrities perform gestures of power, ideals to be practiced in the mirror of Syms’s photo of a messy bedroom. These are not 2-D works so much as miniature films. They’re not miniature films so much as select encapsulations of the way life is lived and seen today: a screen view filled with potentially endless cultural references, family memories, abbreviated conversations, audio tracks, and behavioral memes. 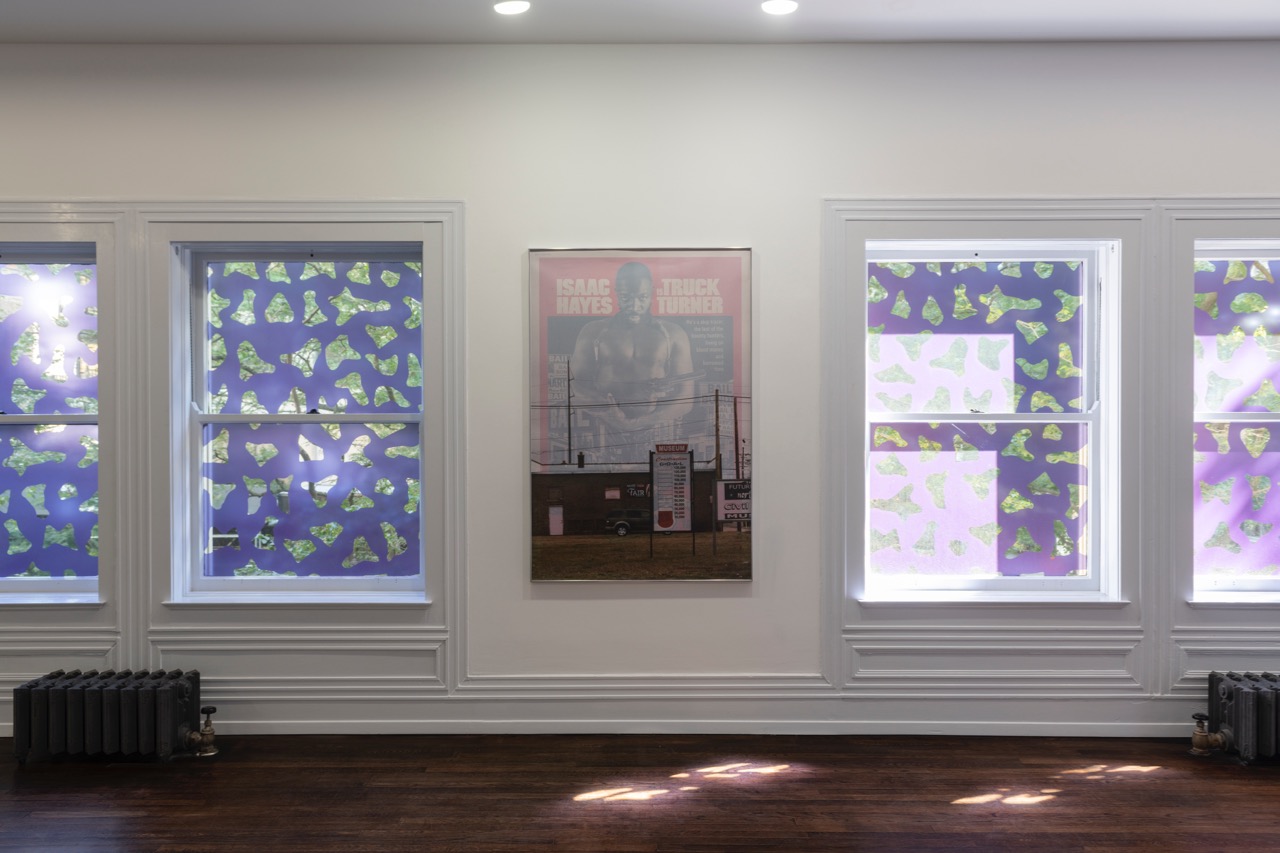 The difference here, and it’s a crucial one, is that Martine Syms is in control, having reclaimed the vast array of cameras, commentary, and references that vie for our selves, even while we think we are self-constructing them. That selfie? That track? That meme? That beauty regime? That pulling out of a phone to photograph an artwork? These are the tics of today, and they are changing our very constitutions, are erasing the differences between being and acting, between self and self-presentation. Syms’s success is in taking these new habits as tools through which to re-present herself to us, her characters to us, and, by extension, ourselves to whoever or whatever it is in our tech-saturated world that’s watching.

Lori Waxman is the Chicago Tribune’s primary freelance art critic. She teaches at the School of the Art Institute of Chicago and has a PhD in art history from the Institute of Fine Arts in New York. Her 60 wrd/min art critic performance has been exhibited in Documenta 13 and a dozen cities across the US. She is the author, most recently, of Keep Walking Intently (Sternberg Press, 2017).