Poetry
Mucus in My Pineal Gland 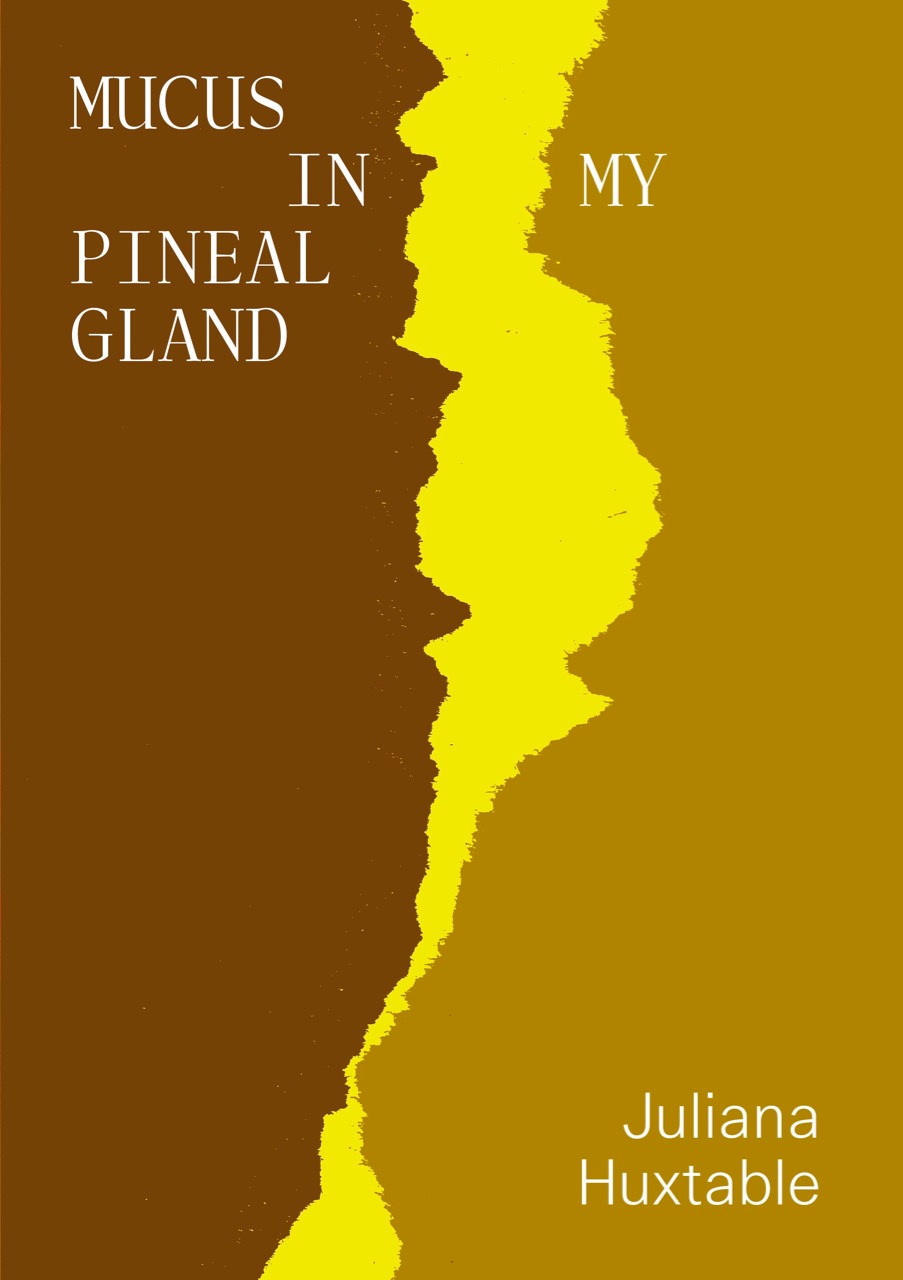 Juliana Huxtable is an artist whose name can easily be followed by a string of nouns—performer, photographer, filmmaker, DJ, writer. But enumerating her activities seems especially insufficient, because her various projects are so clearly entwined: each medium provides a different means of foregrounding the body and personal history in a digitally mediated world. For example, a recent show at Reena Spaulings featured a wall-sized flow chart (hand-drawn in paranoid, conspiracy-theorist style, with accompanying grainy images) mapping social-media discourses and white supremacist imagery. But the flow chart doesn’t progress in the expected direction, tracing the abstract outlines of power structures; instead, it begins with a screenshot of a Facebook post by the artist in which she discusses a sexual encounter with a possible white supremacist, and from there draws an array of connections, linking supportive comments threads to memes of Mr. Clean to alt-right Nazi subcultures.

In this way, Huxtable’s work is not just an exercise in simulacra: sure, it layers references to memes, nightlife, and fashion, but always in light of lived psychological and social tensions. It’s not so much about the construction of identity, but about the real effects (anxiety, desire, understanding, ignorance) engendered by the construction of identity. Nowhere is this clearer than in her new book, Mucus in My Pineal Gland—a dense and sprawling set of texts with no particular allegiance to genre or perspective. Billed as “poems, performance scripts, and essays,” the pieces don’t fit neatly into any of those categories. That doesn’t mean that the question of genre disappears: rather, it reappears consistently throughout the book as undecidable.

For example, much of Mucus in My Pineal Gland uses devices recognizable from “confessional” literature: overtly direct affective statements, recollections of early sexual encounters as if they were the keys to understanding the adult author, general propositions about life filtered through the particulars of personal experience. These are wonderful and familiar devices: they facilitate both empathetic identification (“I can relate to that”) and empathetic alienation (“I can’t quite imagine the inside of that experience”).

But in Huxtable’s work, these confessional tropes slide between genres, dubiously attached to their narrator. For example, the first piece in the book, “HOOD BY AIR,” is at once a poem, an essay, and a rant. As with Shayne Oliver’s experimental fashion label that provides its title, the text moves between commentary on the relationship between self-adornment, identity, and desire (“AS IS MANIFEST IN THE CARNAL MARKETPLACE OF DESIRE EMBODIED IN XTUBE AND POLYVORE / LOVE IS NO LONGER LOVE OF THE SINGULAR.”) and declamatory boldness that seems to make an argument but defies clear interpretation (“SOME PIECES ARE PERMANENT, OTHERS EPHEMERAL, DIMINISHING AGAINST THE HORIZON OF OPENNESS AS A PRE-EMPTIVE TO DIVORCE.”)

But in the middle of the piece, the theoretical tone is interrupted by a scene in which the narrator wakes up next to a lover and finds herself reflecting on the work of beauty (nails, pills, shaving), and about how such work conditions intimacy:

TWELVE HOURS BEFOREHAND, HE TOUCHED MY SKIN WHEN IT WAS SOFT, FRESHLY NAIRED.

NOW THE HAIRS ARE BACK. EVERY BRUSH OF HIS HAND OVER MY BOSOM SENDS A SIGNAL STRAIGHT TO MY SPINE THAT IT’S TIME.

OR MAYBE I JUST LAY HERE AND LET HIM GET A SENSE OF THE REAL.

The slipperiness of this “sense of the real” is a fundamental concern in Huxtable’s work, and maybe especially in Mucus in My Pineal Gland. The scenes describing physical and psychological sensation—the feeling of touch, the feeling of worry, the feeling of memory—spill into theoretical speculations and mashed-up Internet discourse. Perhaps I’m falling for the allure of authenticity that Huxtable’s work critiques, but I found these scenes of intimacy genuinely moving: not because they made me feel closer to the artist, or because I saw myself in them, but because they vividly conjured the specifics of an experience. Whether or not these scenes are “true,” the intimacy reads as personal, which makes the more abstract passages in the book less distant. Genres contaminate each other, so that the theory seems personal and the personal seems theoretical.

Even the all-caps typography exudes a paradoxical realness: it signals directness and urgency. And given the ubiquity of caps in comment-stream ranting, it conjures the idea of unedited text. But when every sentence is in caps, it ceases to be emphatic. Instead, the caps quicken the pace of reading, speeding up the words. My eyes quickly scanned the page, and I initially found it difficult to slow down and remain attentive to the language. This further confuses genre, as the familiar markers of personal or essayistic writing (carefully elaborated detail) slide by too quickly to be absorbed and distinguished, and the differences between styles are flattened by the uniformity of the letters.

That said, Mucus in My Pineal Gland is not a book about sameness or flatness. It’s full of specific stories of trans life, growing up black, and youthful understandings of the limitations and malleability of gender roles. Many pieces focus on childhood and early sexual experiences, or at least glancingly refer to them. For example, the text titled “#AIMNOSTALGIA” tells a story of how 1990s Internet chat rooms facilitated sexual exploration. Huxtable connects adolescent curiosity to theoretical questions about computer-mediated desire and community, while continually forefronting the users’ experience, their need for emotional contact: “SOMETIMES I GO BACK TO MY ABANDONED EMAIL ACCOUNTS AND LOOK AT THE ASS PICS I WOULD SEND. I JUST WANTED TO LOOK AT THE BODIES OF THOSE WHO MIGHT OTHERWISE NEVER BE COMFORTABLE ENOUGH TO SHOW OR SHARE.”

The book doesn’t use theory to explain away these desires, or to make authoritative generalizations about the contemporary. Because the propositional statements don’t build on each other linearly, they function like ambient (though passionate) commentary on the personal narratives. Conversely, the narratives provide a texture of reality to the more abstract and speculative passages, so that a continuous “sense of the real” is produced, even if there is no moment of “authentic” revelation.

But there’s a risk in focusing so intently on the book’s genre: one could (intentionally or not) intellectualize a bad pun and connect genrelessness with genderlessness, as if the book were celebrating a utopian ideal of fluidity. This seems specious to me. After all, Huxtable’s work is not about a lack of gender—gender appears everywhere, sometimes as an energetics (the scenes of taking delight in body and dress), and sometimes as static and oppressive (the scenes of harassment from misogynist, transphobic, or racist men). Mucus in My Pineal Gland doesn’t idealize genrelessness, it moves between genres, unmooring moments of personal experience and speculative thought from literary conventions in order to situate them in the world outside of the text, while reflecting on and enjoying those conventions.

Steven Zultanski is the author of four books of poetry, most recently Bribery (Ugly Duckling Press, 2014) and Agony (BookThug, 2012). His critical writing has appeared in Art in America, Convolutions, Los Angeles Review of Books, Mousse, and elsewhere. In January 2017, an art exhibition inspired by his writing, entitled You can tell I’m alive and well because I weep continuously., showed at the Knockdown Center in Queens.