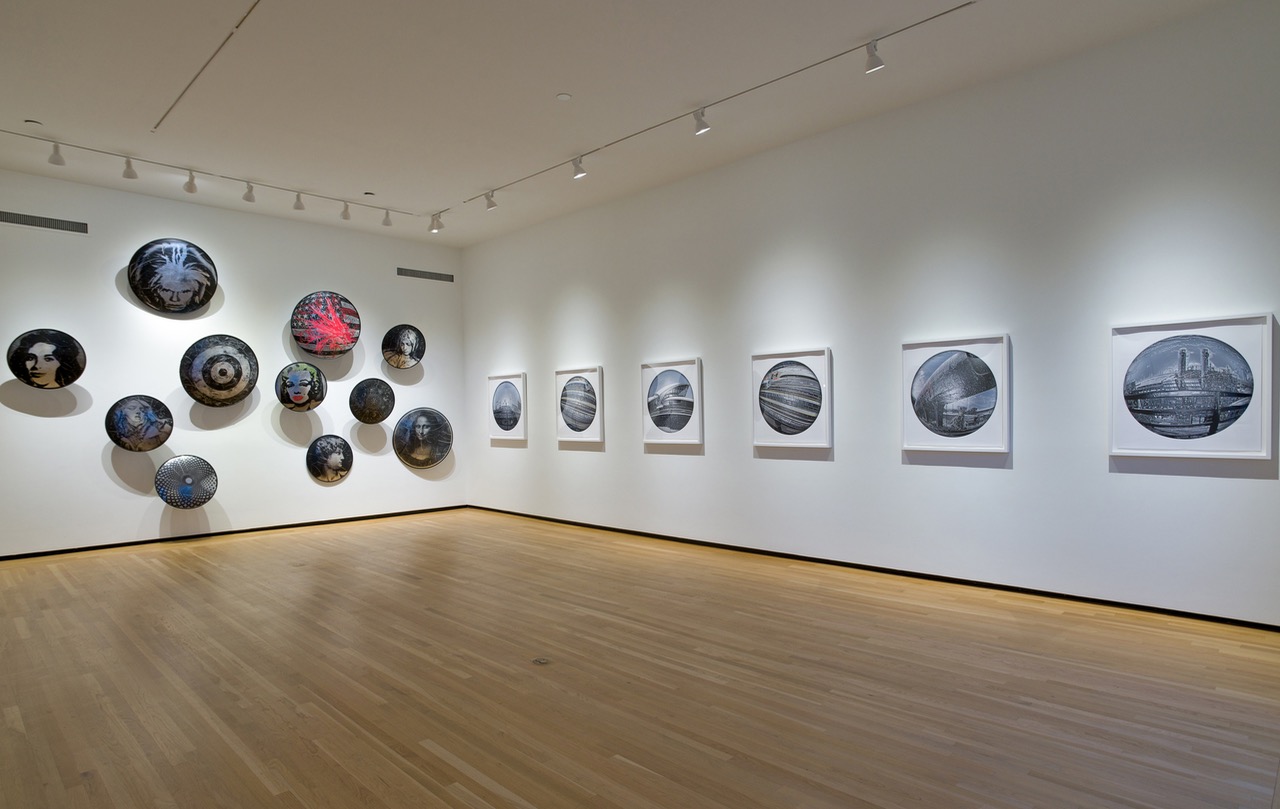 Dawn DeDeaux is a conceptual artist based in New Orleans with a new show at the Arthur Roger Gallery. Some of the work is described as being “in development” (a dress rehearsal, of sorts, for an installation opening in May 2017 at MASS MoCA titled Thumbs Up for the MotherShip), and some of it is described as “transitional.”

The show is dominated by flying-saucer-shaped mirrors from the series Souvenir Shields. They are mounted on the wall like buttons on a lapel. Printed on each is an image from pop art, such as Warhol’s Marilyn, Liz, and a portrait of Warhol himself; a few feature images from old masters, like Da Vinci’s Mona Lisa.

There are also mysterious prints of the old TWA terminal at JFK, seen through a fish-eye lens, and a series of elegant black-and-white images of the interior construction of a zeppelin, as in the Hindenburg. There is an intriguing photo of what appears to be an antiquated space suit, or the kind of body covering that allows you to walk on the bottom of a river, photographed against a background of toile wallpaper-like imagery. The space suit has an ominous mask on the head, with a black window where a face might be. 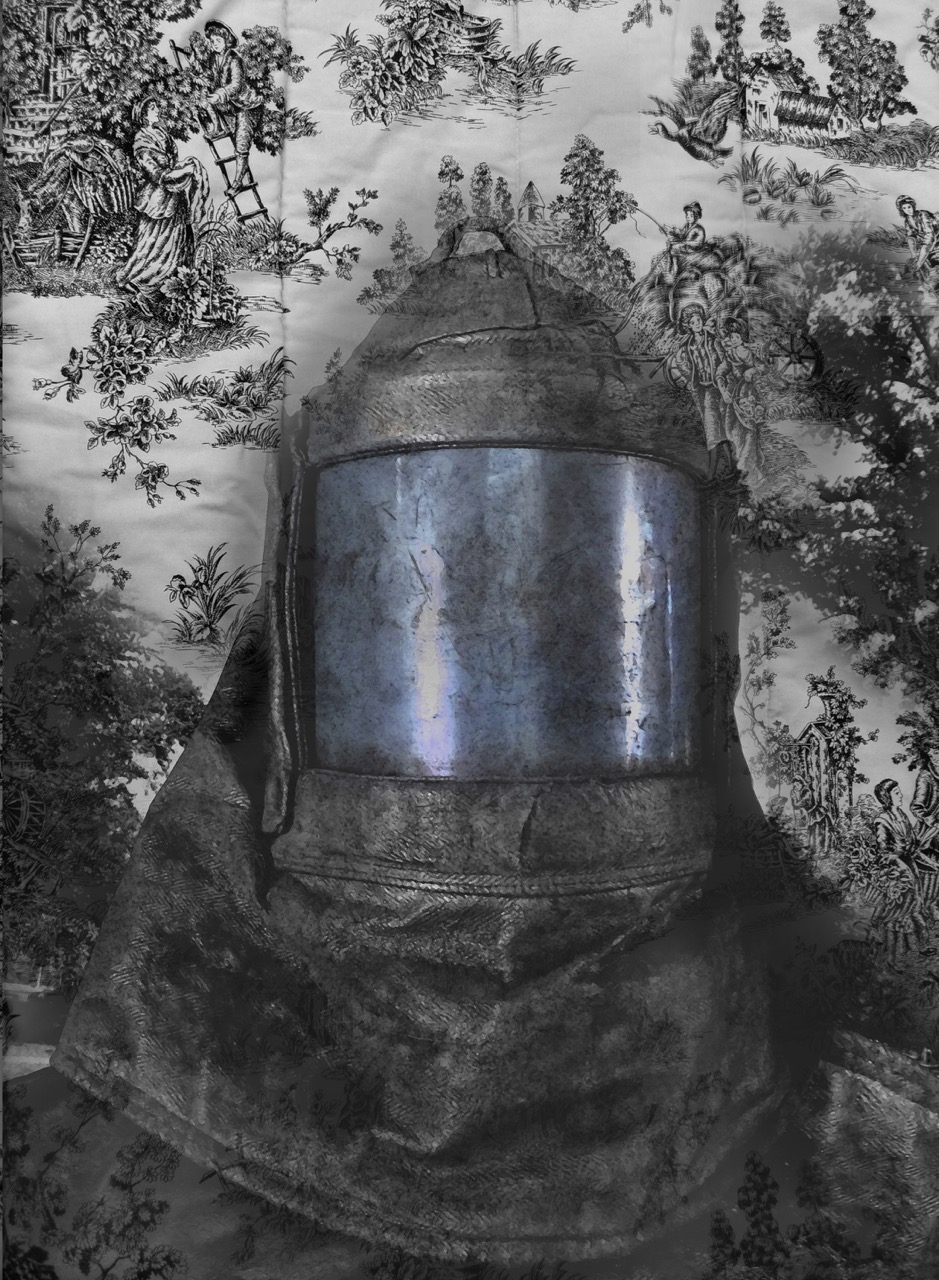 It wasn’t until I attended a panel discussion last fall at the Contemporary Arts Center in connection with their exhibition “A Building With a View”: Experiments in Anarchitecture that DeDeaux’s work began to cohere for me. It was then that I learned that she was one of the founders of the CAC back in the mid-seventies, and that her entire career had taken place in New Orleans. Listening to the panelists discuss the city and its art world of decades past, I realized that New Orleans was the skeleton key that unlocked an understanding of her work. This epiphany led me to recognize, or acknowledge, my resistance to DeDeaux and to breaking that resistance down.

Why resistance? I attribute it to the post-apocalyptic vibe of her MotherShip installation at Prospect 3, the New Orleans biennial held in 2014, complete with the piece’s implicit reference to musician George Clinton and his Parliament and Funkadelic bands. My perusals of art in New Orleans are always accompanied by a suspicion of both its zaniness and provincialism. This is kind of an obnoxious attitude, but one works with what one has. I viewed DeDeaux through that limiting lens. Her MotherShip installation (complete with flying saucers big enough to be life boats) felt both wacky and literal to a fault.

The CAC talk was the first part of my DeDeaux epiphany. The rest of it occurred when I took a trip to the sinking coast of Louisiana, the site of the first climate change refugees in America. I became fascinated by features of the landscape that, beyond the sense of sheer lowering in altitude, had a kind of pre- and postmodern sense of juxtaposition. Gorgeous arabesques of denuded oak trees killed by the encroaching salt water stood next to strange relics of the modern industrial age, none more conspicuous than the large orange discs with little portholes that looked like leftovers from a 1950s sci-fi movie. They sat here and there like giant spinning tops come to rest by the side of the road.

I learned that these were “people pods,” high-tech lifeboats meant to eject from the oil rigs that dot the coast of Louisiana in case of an emergency. An emergency, for example, like the Deepwater Horizon explosion. In that instance there wasn’t enough time to use one. But in other instances, there was.

I couldn’t quite tell if these people pods were trophies, valued possessions, impromptu monuments to the deaths of otherwise unheralded industrial workers everywhere, or just a kind of large-scale waste that no one bothered to clean up once they washed ashore. The answer is—all of the above. They became an essential clue to reading the work of Dawn DeDeaux. These discs were valuable things that were protected from theft by virtue of also being trash. My understanding of what a flying saucer might mean in Louisiana, and what it means in the cosmology of this profoundly New Orleans artist, changed radically after I saw the people pods by the side of the road on Louisiana’s eroding coast. That DeDeaux tried to stage a large-scale, site-specific performance on Isle de Jean Charles’s eroding coast this past summer is something I found out later, but the connection between these pods and her mothership was one I made right away.

The work in DeDeaux’s I’ve Seen the Future and It Was Yesterday excavates a sense of industrial utopianism—that ominous diving suit, for example, or is it a space suit?—which is both ironic and real. DeDeaux captures that sense with images of those nineteenth- and early-twentieth-century structures made when it seemed like the great works of mankind were all signs of progress and would last forever. Some of these very structures were built in New Orleans—cuts in the earth called industrial canals, and the bridges that span them—and live here, rusting, today. In that context, the gorgeous prints of the construction of the Hindenburg zeppelin—a succinct visual metaphor for misguided industrial optimism—make perfect sense in a project about New Orleans.

In the Arthur Roger show, among the appropriated images printed on flying saucers, there is one that stands out—the famous Warhol self-portrait from 1986 with his gaunt face and the bit of hair sticking up, now seen as evidence of Warhol having anticipated Instagram and selfie culture. What struck me about this image in the context of DeDeaux’s work was the resemblance of that shoot of vertical hair to another image that appears in this exhibition as part of Space Story: Rapture #2, a series of four panels in which images of Flash Gordon kitsch mix with the contrails of the Challenger explosion and a panel of her beloved toile with its Flemish, old master vibe. There is no explicit visual reference to the Deepwater Horizon oil spill in this show, but it is implicit, part of the continuum of eco-catastrophe that struck New Orleans in 2005 and 2010. And that Warhol lock of vertical hair is a visual pun, for me, on both the Challenger and the Deepwater Horizon’s iconography—dominated by the image of plumes of water from fireboats surrounding the rigs sending water arcing through the air. 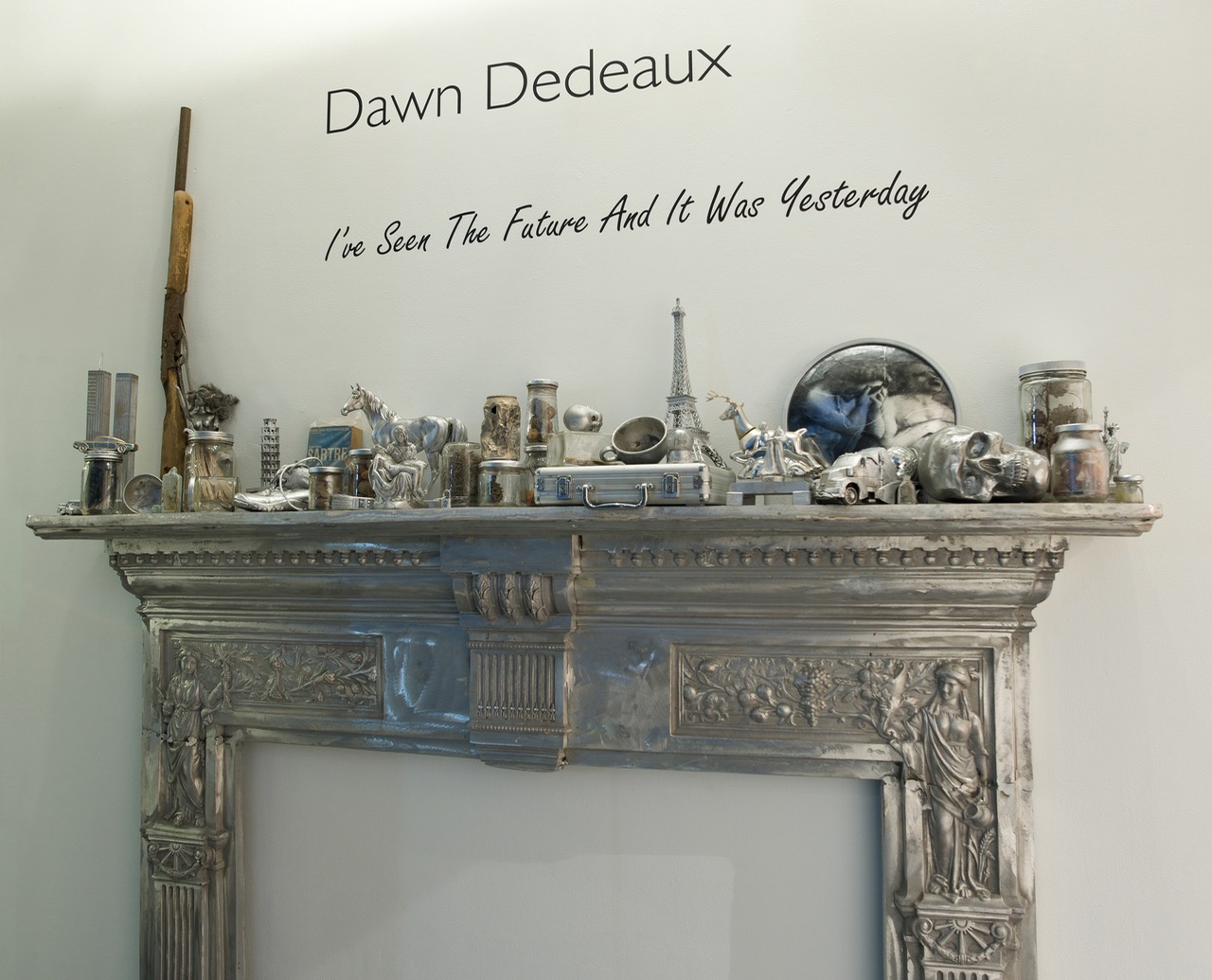 Visitors to the show are greeted at the door by an ornate mantelpiece on which a junky assemblage of souvenirs—all either glass, wood, or plated a dull aluminum—have been arranged. Miniatures of the Eiffel Tower and the Twin Towers, a shoe, a tiny pietà, a skull, a reindeer, a crystal ball, all jumbled together on this decorative mantle, which is itself embalmed in aluminum. Somebody, at some time, must have prized these objects, seems to be the suggestion. Now they are halfway to anonymity, leftovers from an estate sale. The people who cherished them have all gone. That, I now see, is the wonderful subtext of DeDeaux’s work in this exhibit—especially since some of it will soon be traveling north to MASS MoCA: You can’t take your souvenirs with you, in the end. But until the end, you can try.