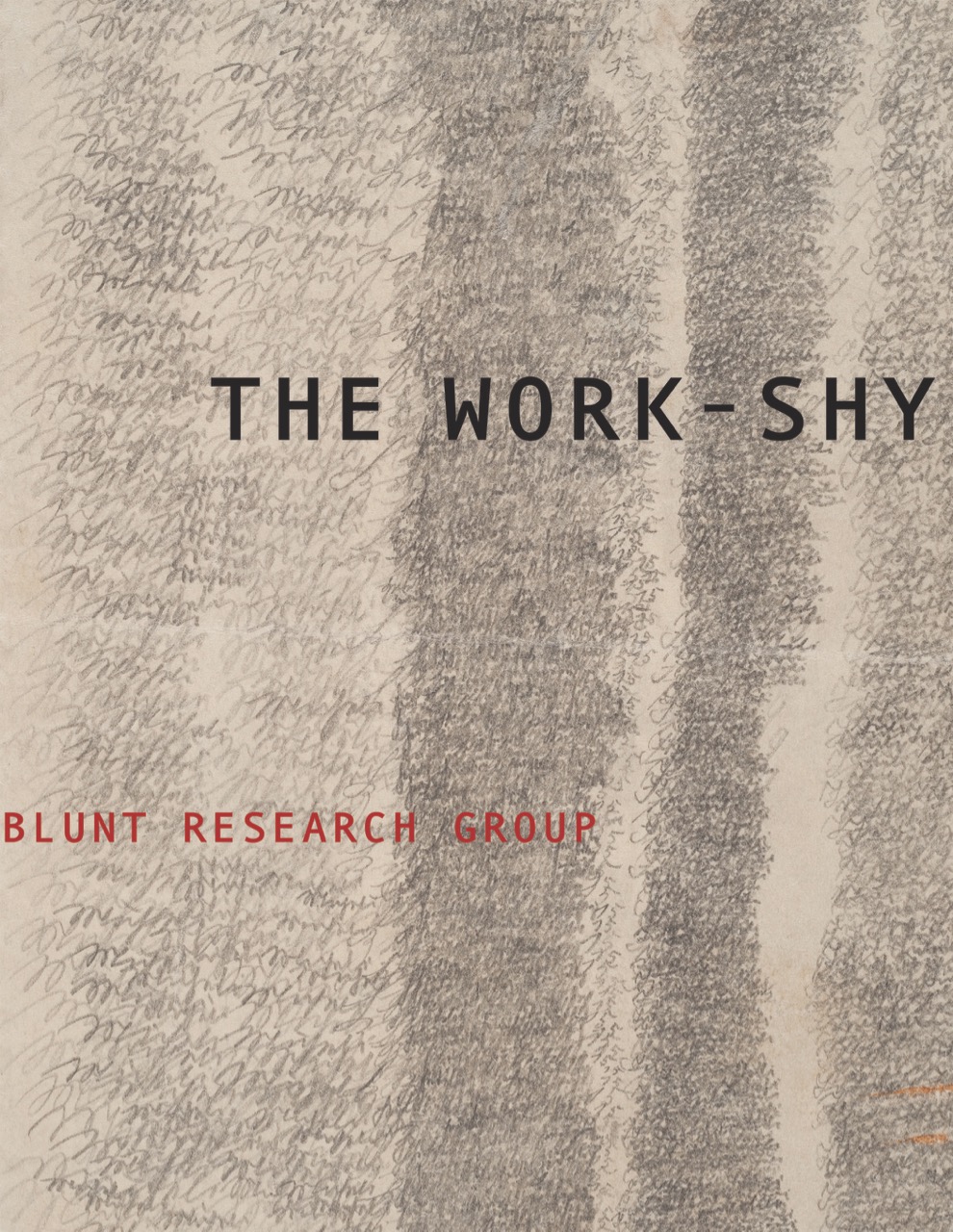 The Work-Shy is a book of spare lyric poems interspersed with a few pencil drawings, archival documents, and photographs reproduced in black and white. Yet these simple forms conduct us into a complex terrain, one shaped by holes: the fissures in authorship; the aporiae of history; the rift between word and image; the hollowing-out of genuine social goods like diagnosis, assistance, collectivity, productivity. At issue is what it means to speak or write and be heard, much less interpreted; what kind of labor it is to leave the record of a self.

The book’s opening section, “Lost Privilege Company,” is introduced by a two-and-a-half-page headnote explaining the procedures by which this series was derived:

The following poems operate under a strict constraint: they are composed entirely of phrases drawn from case files of inmates in the earliest youth prisons in California between 1910 and 1925 . . .

In Mein Kampf, Hitler alludes enthusiastically to the eugenics policies implemented in California and, before long, the Nazi symbology of “degenerates” destined for confinement and extermination included the categories of the “Asozial” (the asocial) and the “Arbeitssheu” (the work-shy).

This is a lot to take in. The frontier mix of paradise and brutality splices into Nazi ideology; the archives of reformatories like the Whittier State School, where the isolation unit was called the “Lost Privilege Company,” yield up their terms. Key texts in documentary poetics—from Muriel Rukeyser’s U.S. 1 (1938) and Charles Reznikoff’s Testimony: The United States (1885-1915): Recitative (1934–79), to Susan Howe’s Souls of the Labadie Tract and C.D. Wright’s One Big Self (both 2007)—hover in the background, as do masters of crazy wisdom like Antonin Artaud. And while assimilating this overload of circumstance and reference, the reader is likely still considering the epigraph—the Situationist slogan ne travaillez jamais—as juxtaposed with the name on the front cover, Blunt Research Group. Where an author’s bio would appear on the back cover, we read:

BLUNT RESEARCH GROUP is a nameless constellation of poets, artists, and scholars from diverse backgrounds.

Scanning the “Sources” listed at the book’s end, as well as the copyright, one deduces that personnel in this group include historian Miroslava Chávez-García and poet Daniel Tiffany, among others. Yet the “nameless constellation” is a more interesting author-position to attach to The Work-Shy. For, in its juxtaposing of subjects’ and authors’ anonymities, the project asks: What rule does one obey, or what self does one create, by having a name or occupation (“scholar,” “poet”)? What kind of blunt instrument is the sifting of archives, and what kind of work is being an artist—or a ward of the state? Are both “ungovernable” outcasts from orderly processes of capital? Or does the imagination of such kinship further obscure the latter’s particularity, already imperiled by their historically enforced silence or “shyness”?

Each of the collaged poems in “Lost Privilege Company” is titled with the name of the teenager whose words it borrows: Frankie, Cornelius, Pedro, Uriah, Javier. Most of the kids were boys. They were aged twelve to seventeen, disproportionately Chicano and African American, but also Native American, white, and of mixed race. Serious and suspicious, they look out from the “mirror portraits” reproduced in The Work-Shy—administrative documentary images in which sitters were photographed beside a mirror, so that both sides of their faces can be seen.

Blunt Research Group italicizes the teens’ voices and leaves case notes from the institutional researchers in plain type, emphasizing the domination of the former by the latter. Thus the poem titled for Jesus, in its entirety:

and was sent to “thaw out”

for mauling and kissing another boy used

to teach younger boys to steal

degenerate
one would almost call him

The poems are hard to excerpt—a sign of their allusive integrity. The one titled for Frances:

in the habit of junking

in the habit of screaming all night

So Jesus was queer, or lonely, or had been abused, and urged others (or was “used” by them) to get their hands on the means of survival or pleasure. He was too ardent with his mauling, kissing, teaching, and playing, but simultaneously too frozen—requiring a disturbing “thawing out.” Where else had Frances been that Whittier seemed as good a place as any? No wonder she acted stand-offish, and screamed at night. What happened to her brother, and what kind of fun or danger was junking? How could she be stupid if she was an incorrigible reader, and what was she reading as the potatoes burned?

The second section in The Work-Shy, titled “The Book of Listening,” explores in short prose stanzas the ethics of such questions:

The poem hovers between the obligation to seek permission to listen and the impossibility of obtaining it from a voice that cannot be reached.

For the third section, “Creedmoorblanca,” the book shifts its scene, culling from other archives: from the Heidelberg Psychiatric Clinic, which houses the Prinzhorn Collection of art of the insane; the Breitenau Workhouse, which became a concentration camp; the New York State Training School for Girls (“where the fifteen-year-old Ella Fitzgerald was confined in 1933”); and Creedmoor Psychiatric Center (“where a teenage Lou Reed underwent shock ‘therapy’ in 1959”). The language of these poems is more elevated than that in “Lost Privilege Company,” and inmates’ words appear without mediation by doctors or case-managers—though, of course, they are managed and translated by Blunt Research Group. A patient named Marmor writes of

the still deliquescing but repentant

delinquent daydreaming
crying fearfully but cheerfully for nothing

Hyacinth notes that “to walk is somewhat more abstract than life.” Others, like Jacqueline, make up the terms they need:

That Situationist battle-cry never work is romantic as well as disruptive, and in this way The Work-Shy celebrates an old theme, the vision of madness and degeneracy as a path beyond instrumentalized compliance. But simultaneously the book takes as its focus the suffering required to even passively resist the violent absurdity of authoritarianism. It can take great effort to prove prokalastarrokalarembrokelastrrmakalastoste-marlokerster.

Frances Richard is the author of Anarch. (Futurepoem, 2012), The Phonemes (Les Figues Press, 2012), and See Through (Four Way Books, 2003). She writes frequently about contemporary art and is co-author, with Jeffrey Kastner and Sina Najafi, of Odd Lots: Revisiting Gordon Matta-Clark’s “Fake Estates” (Cabinet Books, 2005); currently she is editing a volume of essays on Joan Jonas (Wattis Institute, forthcoming). She teaches at the California College of the Arts in San Francisco.