Film
I Love You, Daddy

Louis C.K. returns to the silver screen with an incoherent new film. 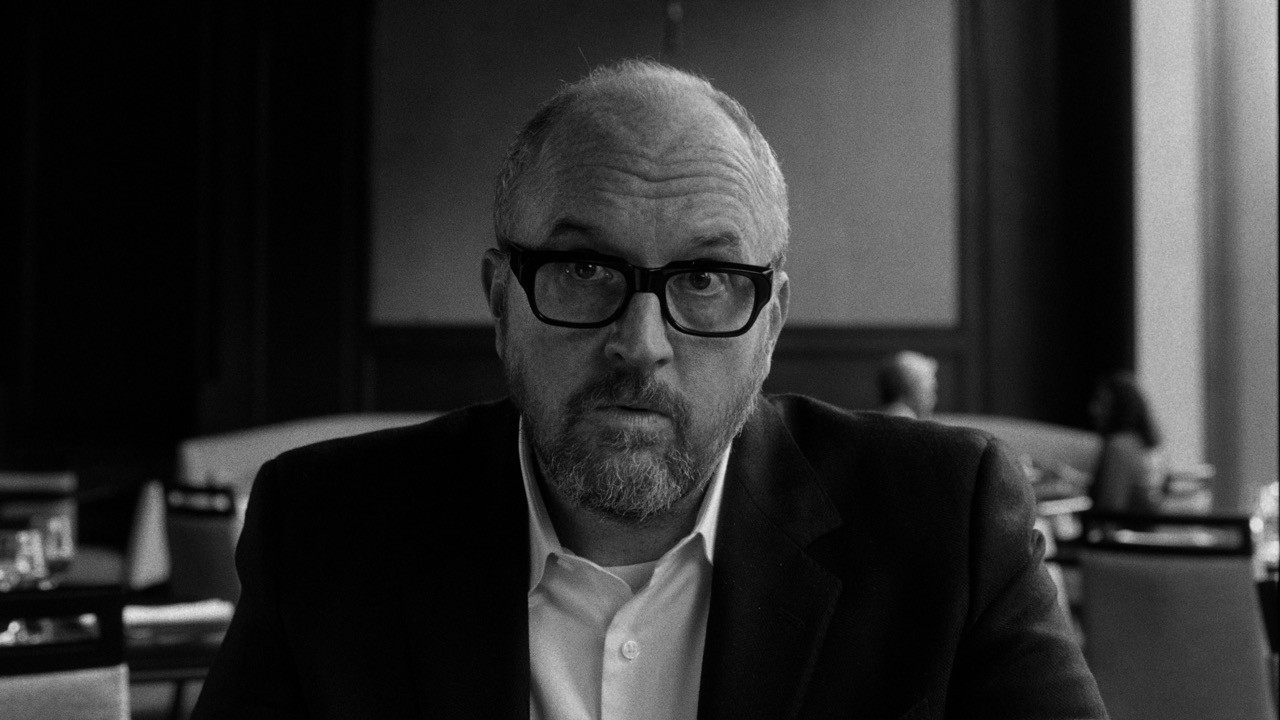 Louis C.K. in I Love You, Daddy. Image courtesy The Orchard.

At an event for this September’s Toronto International Film Festival, which hosted the surprise world premiere of I Love You, Daddy, Louis C.K.’s first feature film in sixteen years, C.K. was introduced to the crowd as “the biggest comedian in the world.” Other versions of this description—best, funniest, greatest—have orbited C.K. for close to a decade, dating back to the 2010 debut of his FX series, Louie, which follows the travails of a comedian, played by C.K., whom the world has judged to be just okay. Although he continued touring and recording comedy specials, C.K. has admitted that his stand-up began to slip as Louie took off. Becoming “the biggest comedian in the world” was for C.K. a matter of timing and of merging with the times: Louie’s success was enhanced by the story of its independent creation; the show’s traffic in personal branding, movable set pieces, and topical, meme-friendly material made it easy to like, a no-brainer to share, heaven to tweet.

That C.K. maintained control of the production as writer, director, editor, and star lent a sense of integrity to the end result: here was someone who cared less about money than getting it right. Fragmented, often surreal, and fascinated with its central character’s refractive psyche, Louie actively sought the status of art, and critics—especially those in C.K.’s white, male, middle-aged demographic—obliged. “Authentically artful and unnaturally profound,” wrote Chuck Klosterman of the show in 2011. “There’s no debate over its value because there’s no contradictory position to take.” If he was artful, if he made art, C.K. did not emerge from Louie an artist, precisely, but something both more and less: a creature of the moment, self-made and self-determined, surfing his laptop to fame and followers, a disruptor, an influencer, a multi-platform creator.

I Love You, Daddy, a limp showbiz parable disguised as a work of personal and moral reckoning, is most credible as an elegy for a fading archetype—that of the great male artist. “I’ve always wanted to be that guy,” says Glen Topher (C.K.) of Leslie Goodwin (John Malkovich), a filmmaker of canonical renown. Glen has found success in what is implied to be the lesser realm of television. During his first encounter with Leslie, at a splashy party thrown by movie star Grace Cullen (Rose Byrne), Glen expresses disillusion with his new project and perhaps the whole creative enterprise: “You know when you get into that mode where you just start making things because you can?”

Leslie doesn’t know. With his pointed goatee and fussy, neo-Edwardian garb, Leslie exists on a different plane, has stepped out of the past, is perplexed by almost all of his interactions with other people. That Leslie’s reputation for genius is rivaled by rumors of his sexual predation—one involving the violation of a child—doesn’t concern Glen. “Dad, he’s a child molester,” says Glen’s glossy seventeen-year-old daughter, China (Chloë Grace Moretz), who accompanies him to the party at Grace’s suggestion. “That’s just a story,” Glen scoffs. “He’s a great artist.” 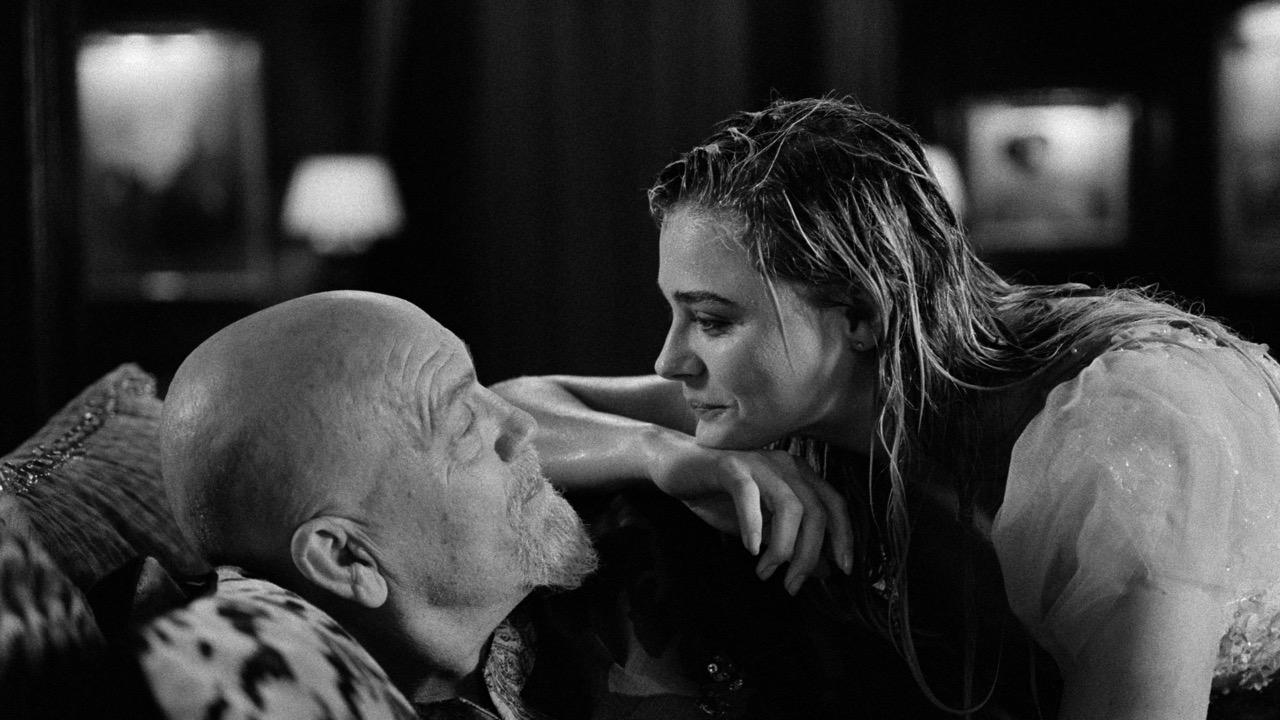 John Malkovich and Chloë Grace Moretz in I Love You, Daddy. Image courtesy The Orchard.

Grace’s party establishes the premise on which I Love You, Daddy is meant to turn: What if your hero, whose alleged behavior toward young girls you have ignored and excused, turned his sights on your daughter? Beginning with the film’s invocation of Woody Allen and specifically Manhattan, the 1979 film in which Allen plays a jaded forty-two-year-old television writer dating a seventeen-year-old girl, I Love You, Daddy favors coy deflection and facetious gestures over an honest engagement with the terms it sets for itself. Where Allen used black-and-white film and a Gershwin score to enact a modern world in which a romantic ideal—wrought by classical Hollywood movies—both suffuses the lives of the characters and is obviated by the conditions in which they live, C.K.’s Manhattan references (I Love You, Daddy was shot in black-and-white 35 mm and features a Gershwin-extremely-lite score) point to nothing beyond the obvious. The allusions have no integral purpose, contributing instead to the movie’s general, gnawing, and ultimately malignant incoherence.

Part of the dissonance—aesthetic, moral, tonal, perspectival—that characterizes I Love You, Daddy derives from its exploration of relations between men and women living in a world inflected not by old Hollywood tropes but a culture of pornography. As with much of C.K.’s work, sex and dating—as opposed to love and romance—define these relations, which are cast in terms of winning and losing, successful and failed transactions. All parties are reduced by this predicament, none more so than the coarsely sexualized China, who appears most oblivious to it.

Whether they shout in his face (like Pamela Adlon and Edie Falco, who play his ex-girlfriend and colleague, respectively) or croon in his ear (“I love you, Daddy”), women focus on Glen, and want things from him. Perhaps the least persuasive moment in a movie plastered together with them depicts Glen’s confession to Grace, the potential star of his new series, of his growing feelings for her. Such a development has no place in the acrid world of the film, where most conversations include graphic reference to a sex act, and women come in two varieties: the ones you masturbate to—as Glen’s sidekick (Charlie Day) pretends to, twice—and the ones you don’t.

What kind of woman will China turn out to be? C.K. dispenses with China’s mother (Helen Hunt) in the opening scene; the question is Glen’s alone to settle. Will China be a feminist or a hot girl in a bikini? A daddy’s girl or a woman of means? Will she, most critically, fuck Leslie or retain her virtue? Will she be the kind of woman who gives in to a powerful, controlling older man, or will she do as her father says?

I Love You, Daddy seeks credit for its willingness to discomfit, to plumb the gray areas, to tell the uncomfortable truth, in C.K.’s description, “that you don’t know anybody.” But a cast of ciphers will never tell a human story—especially one about human unknowability—and life’s rich ambiguities will always elude a perspective confined, most evidently when it is trained on women, to binary extremes. By the close of this overlong, overplayed tale, China’s fate receives the neat answer for which the character is designed. C.K. is less sure what to do with Leslie, who with his woolly affect and cotton robes is the only figure to move through the film not in stark outline but a protective haze.

In the end, another teenage girl, China’s friend Zasha (Ebonée Noel), offers to Glen a resolution to the Leslie conundrum and the movie’s thesis statement in one: “Everybody’s a pervert!” she exclaims. With this, the film’s cycle of feints and empty provocations is complete. Everybody’s a pervert presents a reductive totality as a triumphal study in shades of gray. In this, it manifests C.K.’s reliance on an audience mistaking the fruit of grinding solipsism for home truths, repellent behavior for realness, self-exoneration for fearless self-scrutiny. I Love You, Daddy is a lazy work, quickly made, ugly to sit through, and baffling, at best, to consider. The movie’s value, perhaps, lies in its revelation of a persona, if not an artist, crossing from an ordinary and thus-far profitable disingenuousness into the realm of the truly perverse.