Ben Affleck fights off a harem of himbos in Adrian Lyne’s adaptation of Patricia Highsmith’s novel. 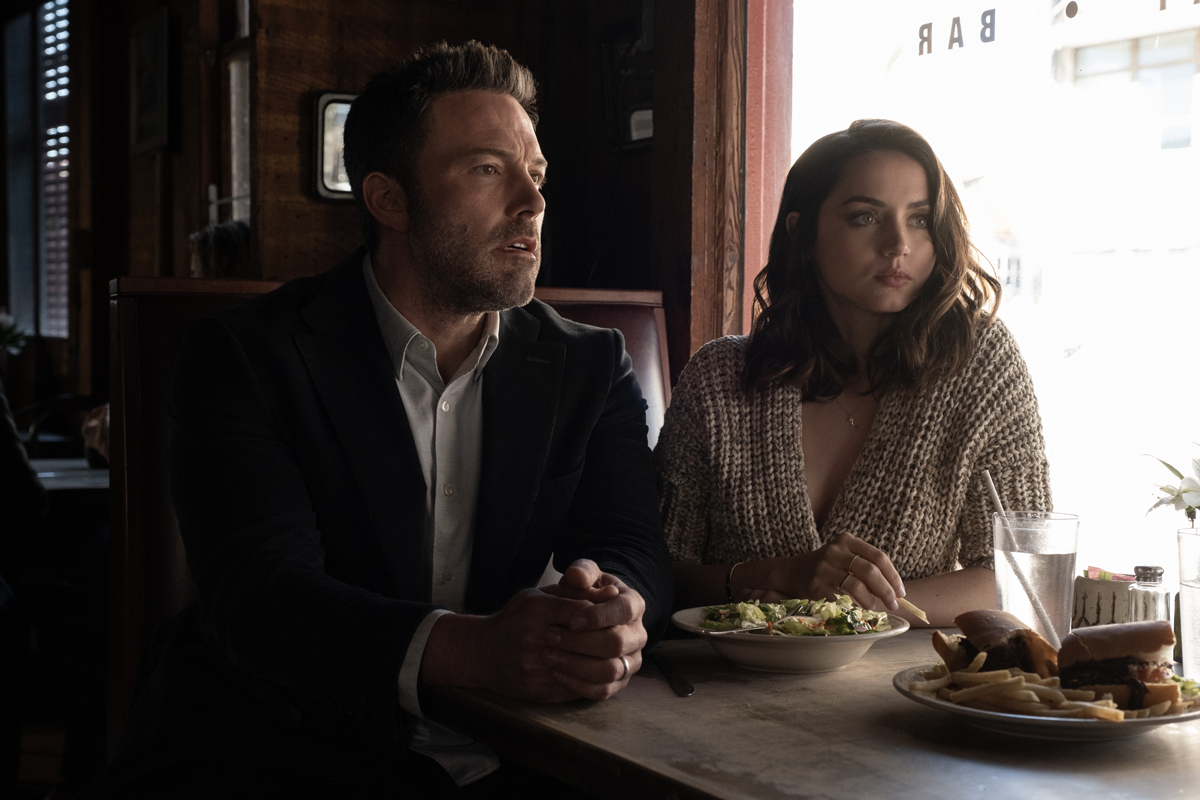 For Patricia Highsmith—legendary lez lothario, notorious triangulator, unparalleled instigator of dyke drama—the only creatures capable of consistent romantic and/or conjugal happiness were gastropods. In Deep Water, her 1957 novel of extreme marital dysfunction, Vic Van Allen, the book’s urbane, sociopathic protagonist, raptly observes the mating of two of his treasured pet snails (his fondness for the mollusks reflects that of Highsmith, who would tote the slimy things to parties in her handbag): “Hortense and Edgar were making love, Edgar reaching down from a little rock to kiss Hortense on the mouth. Hortense was reared on the end of her foot, swaying a little under his caress like a slow dancer enchanted by music. . . . How they did adore each other, and how perfect they were together!”

No flashes of the tenderness exchanged by these invertebrates are ever demonstrated between Vic and his wife, Melinda, in Deep Water, the second Highsmith novel, following 1954’s The Blunderer, that fictionalizes aspects of her ceaselessly fractious four-year relationship with sociologist Ellen Hill during that decade. (The writer often transposed elements of her sapphic affairs to the mainly heterosexual couples and individuals who populate her work.) The pact forged by Vic and Melinda, who have a six-year-old daughter and whose marriage has long been sexless, is particularly grim: she is allowed as many lovers as she wishes provided that she never seek a divorce. Highsmith’s unerring ability to detail the pathologies that fester as a result of this perverse arrangement give the novel its sick appeal. “Atmosphere is the thing in this book,” Highsmith noted in her diary in 1955, while drafting Deep Water. “An atmosphere of hatred, of comic petulance among all the characters . . . Sniping, sniping, ambushing, the ballet of the wearing of the nerves.” 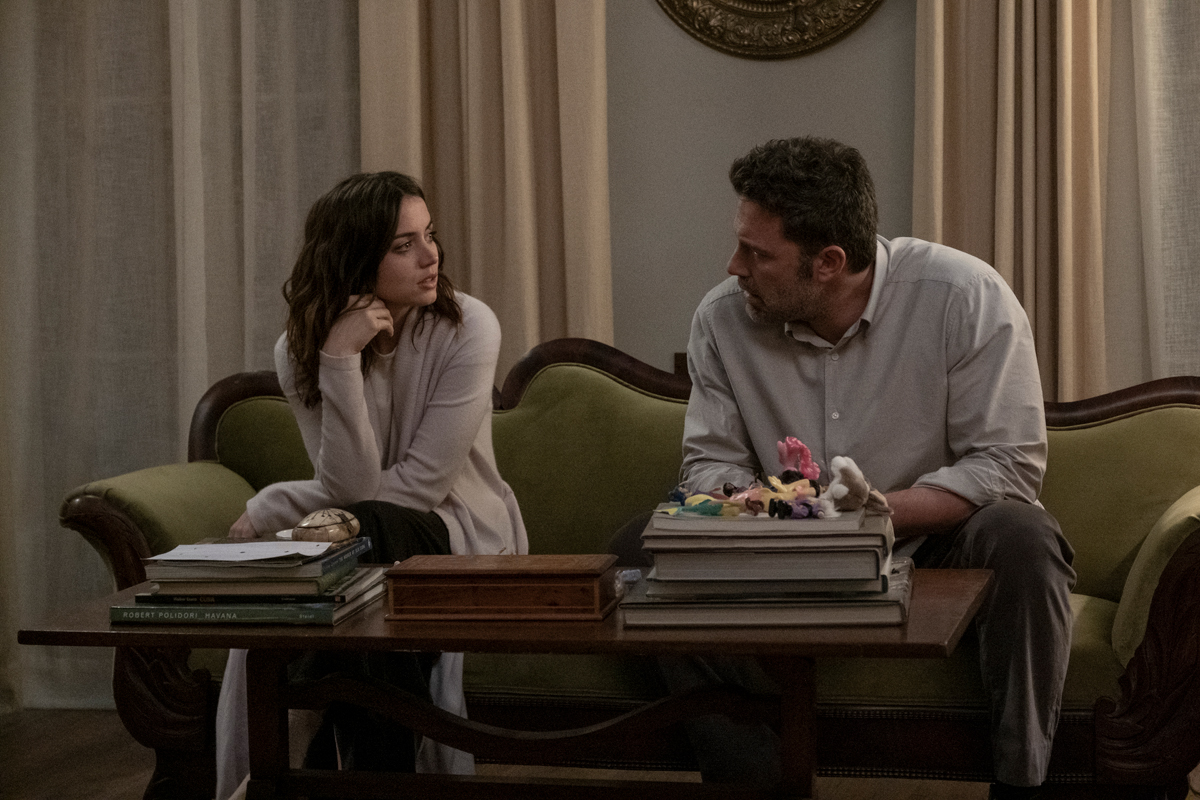 The feeble, witless adaptation of Deep Water directed by Adrian Lyne—his first film in twenty years—turns that ballet into a twerk. Updating Highsmith’s midcentury novel to the present day and relocating it from a fictional affluent Massachusetts town to the posh outskirts of New Orleans, Lyne’s movie remains mostly faithful to its source, with one significant difference. However miserable, Vic (Ben Affleck) and Melinda (Ana de Armas) still have sex, still desire each other. This major intervention—Deep Water was scripted by Sam Levinson, creator of Euphoria, HBO’s wildly popular horny-teen drama, and Zach Helm—thus awkwardly reconfigures Highsmith’s fascinatingly bleak tale to conform to the mandates of the “erotic thriller,” the genre that Lyne, whose queasy oeuvre includes 9 1/2 Weeks (1986), Fatal Attraction (1987), and Indecent Proposal (1993), will forever be yoked to. 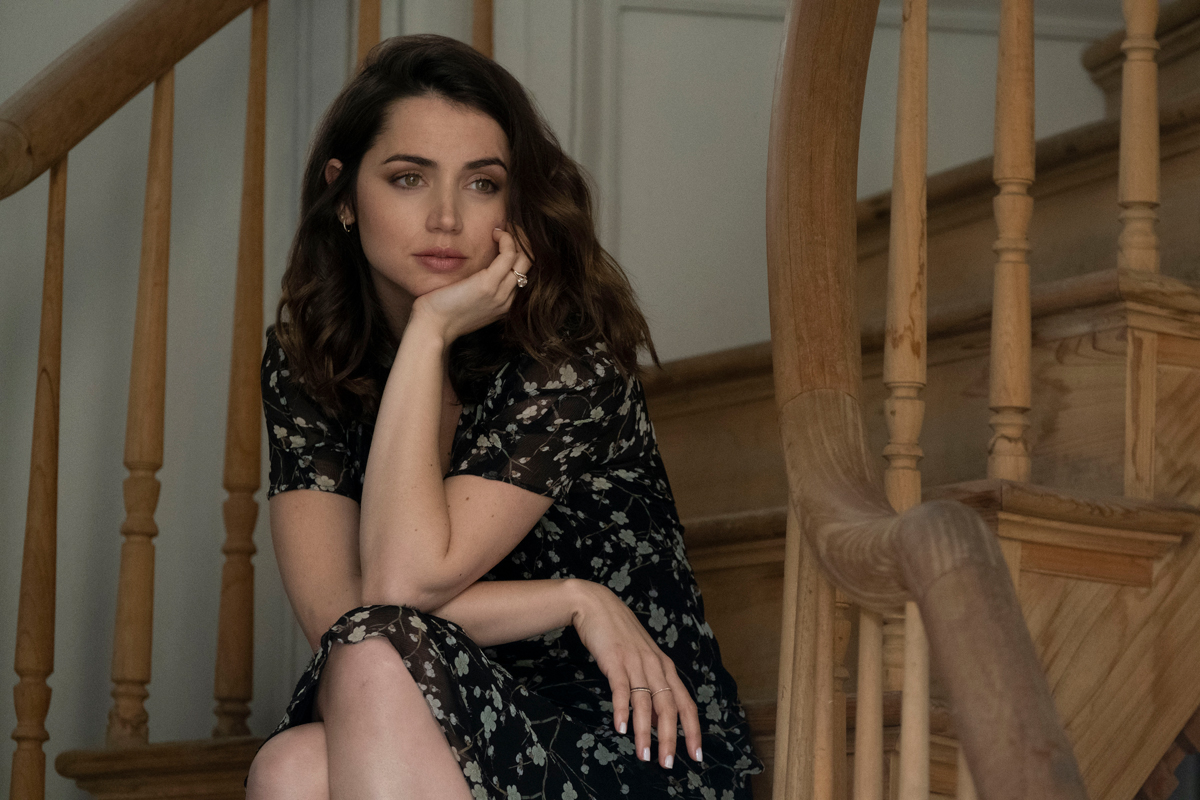 Dramatizing the chilling, clammy combination of ruthless possessiveness and stark indifference that defines Vic’s attitude toward Melinda in Highsmith’s book—“He wanted her to himself, but she was not attractive to him as a woman; that he realized, too. Neither was she repellent. He simply felt that he could get along without her, or any other woman, physically, for the rest of his life,” she writes—would likely have proved beyond Lyne’s ken. (I could imagine Todd Haynes, whose swoony, superlative Carol from 2015 stands as the best of all Highsmith adaptations and whose earlier work smartly explores marital tristesse, making a great film out of Deep Water.) Although onscreen Vic remains, as he does in the novel, an unconventional main character—a passive cuck (and snail lover) whose compliancy ultimately gives way to homicide—Lyne and his screenwriters never stray from familiar tableaux when depicting the frazzled erotic bond between the spouses: a blow job in a car that quickly turns vicious; a sub-Buñuelian scene of Vic, on bended knees, submissively placing his wife’s feet into spiky black heels; rapidly edited, neon-pink-and-blue-filtered bedroom fucking. 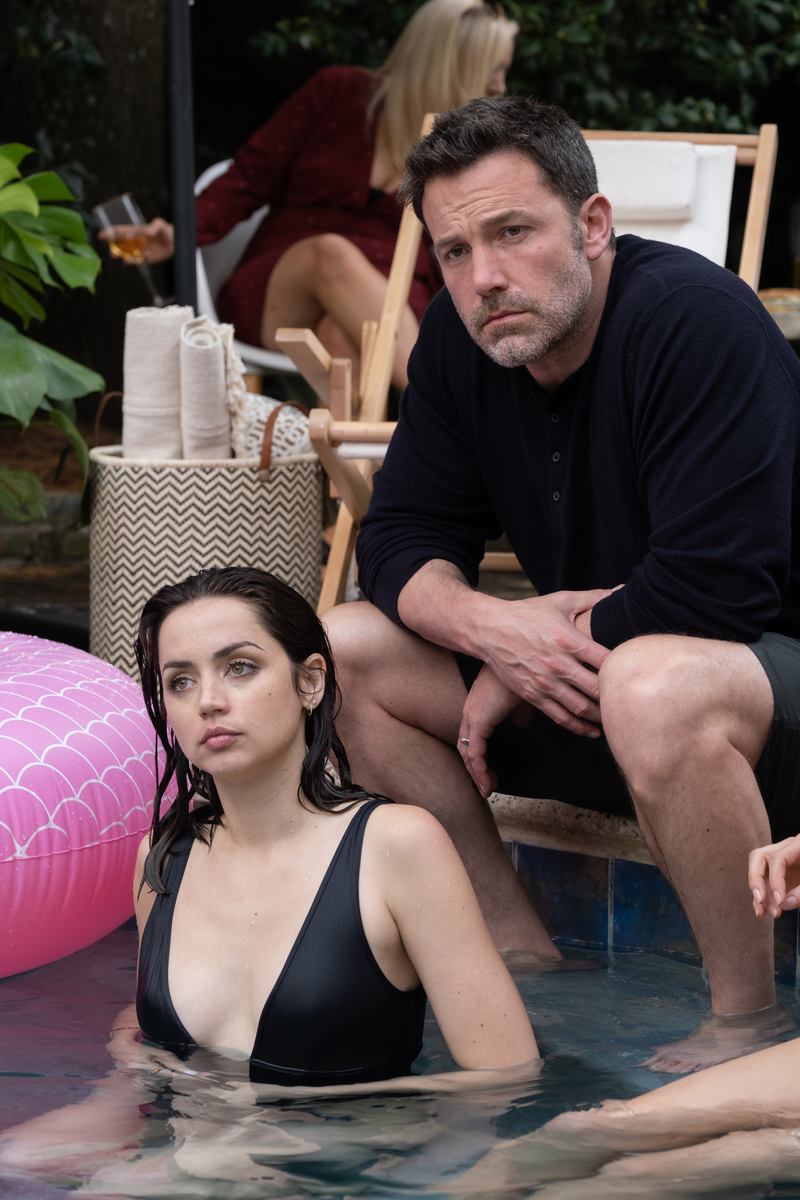 However much they distort the original, these alterations alone aren’t necessarily egregious. They become an insurmountable problem, though, when the actors portraying the emotionally sadomasochistic couple can’t evince the merest spark of shambolic erotic energy between them. (Perhaps that ignition happened only offscreen: Affleck and de Armas became a couple while filming Deep Water; their relationship ended about a year later.) Affleck, much like he did in David Fincher’s Gone Girl (2014)—another film about a wretched married couple and another page-to-screen transfer, this one of the eponymous 2012 blockbuster novel by Gillian Flynn, an avowed Highsmith fan but a poor imitator—plays the beleaguered husband with a puny repertoire of responses and reflexes. 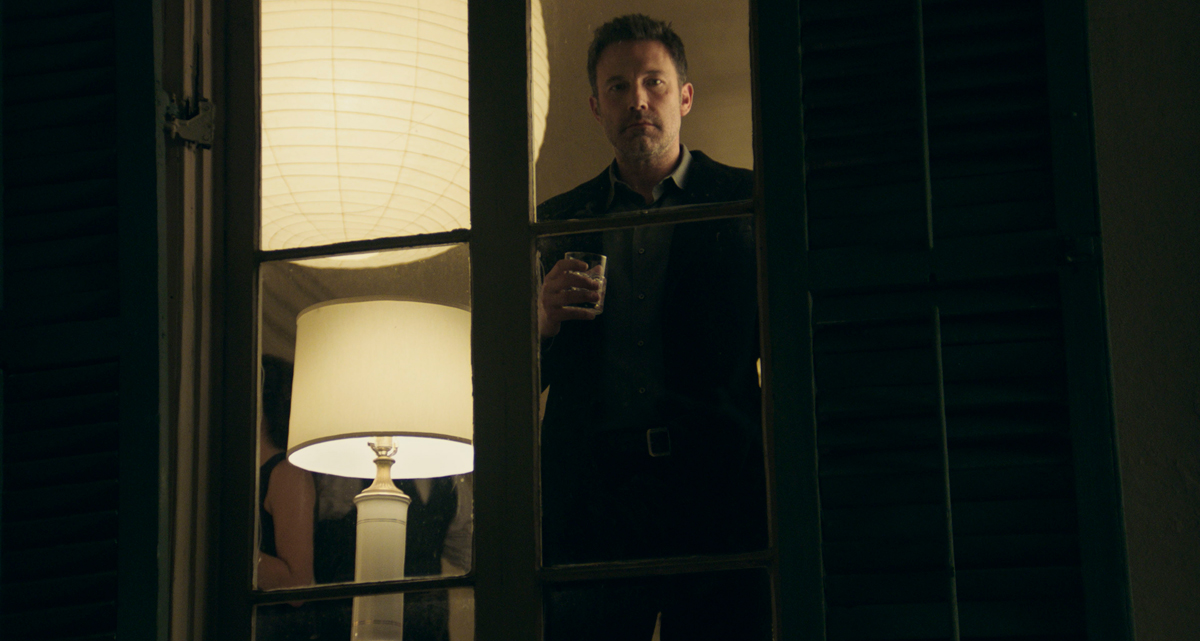 This is not the stoicism of Highsmith’s Vic, whose inurement to his wife’s humiliations, both public and private, is coolly calculating; below this superficially placid surface roil fetid thoughts and schemes. No such inner turmoil can be read on Affleck, who seems capable of committing only to a wan rictus, an apathetic glower—facial expressions that don’t change much when Vic is rutting with his wife. When Melinda parades her latest himbo (her he-harem includes Euphoria’s abusive alpha stud Jacob Elordi as a lounge-bar pianist) in front of her husband and their appalled friends at a party, Affleck puts more effort into getting ice for his drink than in conveying the welter of urges that Vic must mask. 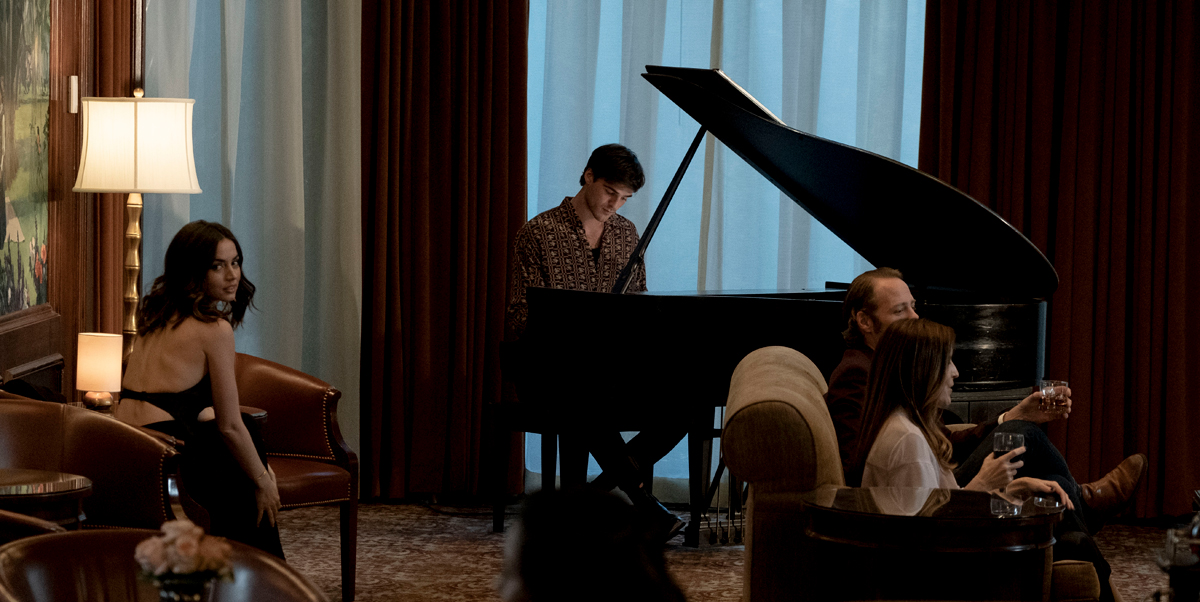 De Armas’s Melinda, in contrast, constantly erupts with emotional incontinence: fits of high dudgeon, manipulative lust, towering self-regard. This careering, chaotic energy is infrequently tempered—another discrepancy with Highsmith’s conception of the character, who could be just as shrewd and terrifyingly mute as her husband. More rarely still does this ricocheting surplus of passion alight with any conviction on Vic. “If you were married to anyone else, you’d be so fuckin’ bored, you’d kill yourself,” Melinda snorts—a declaration that fails to stir him from his catatonia. 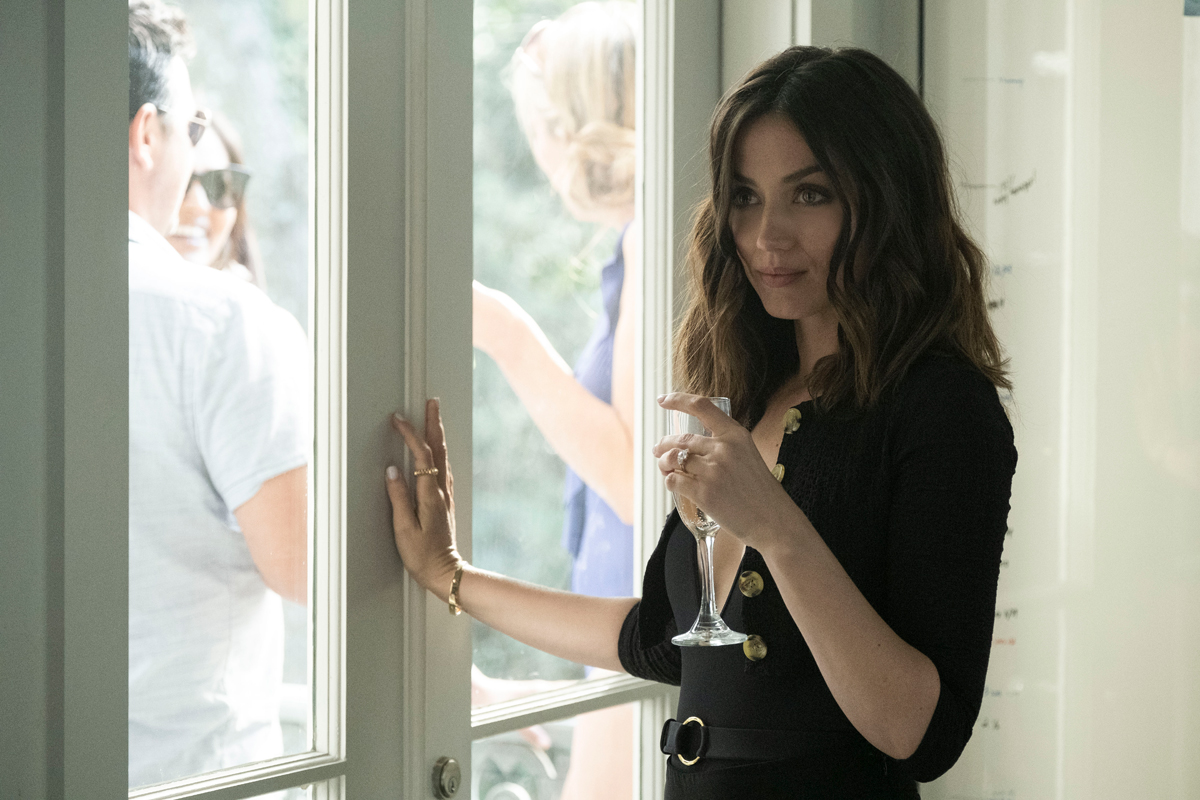 Melinda’s volcanic explosions, though, are nothing compared with Deep Water’s complete lack of control in its final act, the moment when the film diverges incomprehensibly from the novel, hitting bottom when autocorrect is deployed as a plot point. Highsmith’s novel follows the curdled dynamic, the extreme antipathy between the mates to its most gruesome conclusion. “As Vic slipped into sleep, the antagonism rose slowly in him against Melinda, almost involuntarily, wraithlike, groping like a wrestler for a hold. . . . It was as if she wore a label, ‘My Enemy,’ in his mind, and his enemy she was, beyond the reach of reason or imagination of change,” she writes. In Lyne’s version, “My Enemy” becomes “My Ally.”