Collected in 1957’s Mythologies, Roland Barthes’s “The Face of Garbo” both exalts and semiotically scrutinizes the visage of the screen legend, who “belongs to that moment in cinema when capturing the human face still plunged audiences into the deepest ecstasy.” As we edge closer and closer to a post-human reality, that era grows ever more remote. But not entirely; gazing at outsize faces remains one of moviegoing’s singular pleasures. And this line from Barthes’s essay still holds true: “A mask is but a sum of lines; a face, on the contrary, is above all their thematic harmony.”

In Destroyer’s opening minutes, we are presented with an extreme close-up of that ravaged mug, an image returned to repeatedly. With rheumy eyes and sallow, desiccated skin, Kidman-as-Bell at first recalls a Dorothea Lange photograph. Yet by the third or fourth time her visage fills the frame—each recurrence revealing a new faux-decayed facial feature for the viewer to fixate on, such as Bell’s dingy teeth—the comparisons unintentionally grow baser. Midway through the movie, after having struggled to pinpoint exactly who Kidman in this garish maquillage reminded me of, I wrote this in my notebook: She looks like Chucky.

The ostentatious transmogrifying is meant to signify a bold endeavor. But Kidman’s disguise cannot conceal the fact that Destroyer is a meager crime thriller, made no more intriguing by its time-toggling structure, shifting between the present day and seventeen years earlier. Setting the plot in motion is the discovery of a corpse in Glendale Narrows; the distinct tattoo on the back of the dead guy’s neck marks him as a member of a gang of bank robbers that Bell infiltrated nearly two decades ago as an undercover FBI agent.

In the first of a series of flashbacks, clumsily dropped into the narrative, we see Bell and her partner in that covert operation, Chris (Sebastian Stan), rehearse the minutiae of the backstory of the couple they must pretend to be for their mission. (These time-rewinding segments present us with another alienating effect, that of Kidman now looking more like a hyperreal version of her actual porcelain-complexioned, eerily wrinkle-free self.) Soon fiction becomes fact, and the feds fall in love while on assignment. Less clear is what motivates a spectacularly bad decision the two make, resulting in carnage that has led to Bell’s corroding guilt and current dipsomania. That fresh stiff in Destroyer’s beginning scene turns Bell into an avenging angel, ferociously focused on settling unfinished business with the criminal crew. 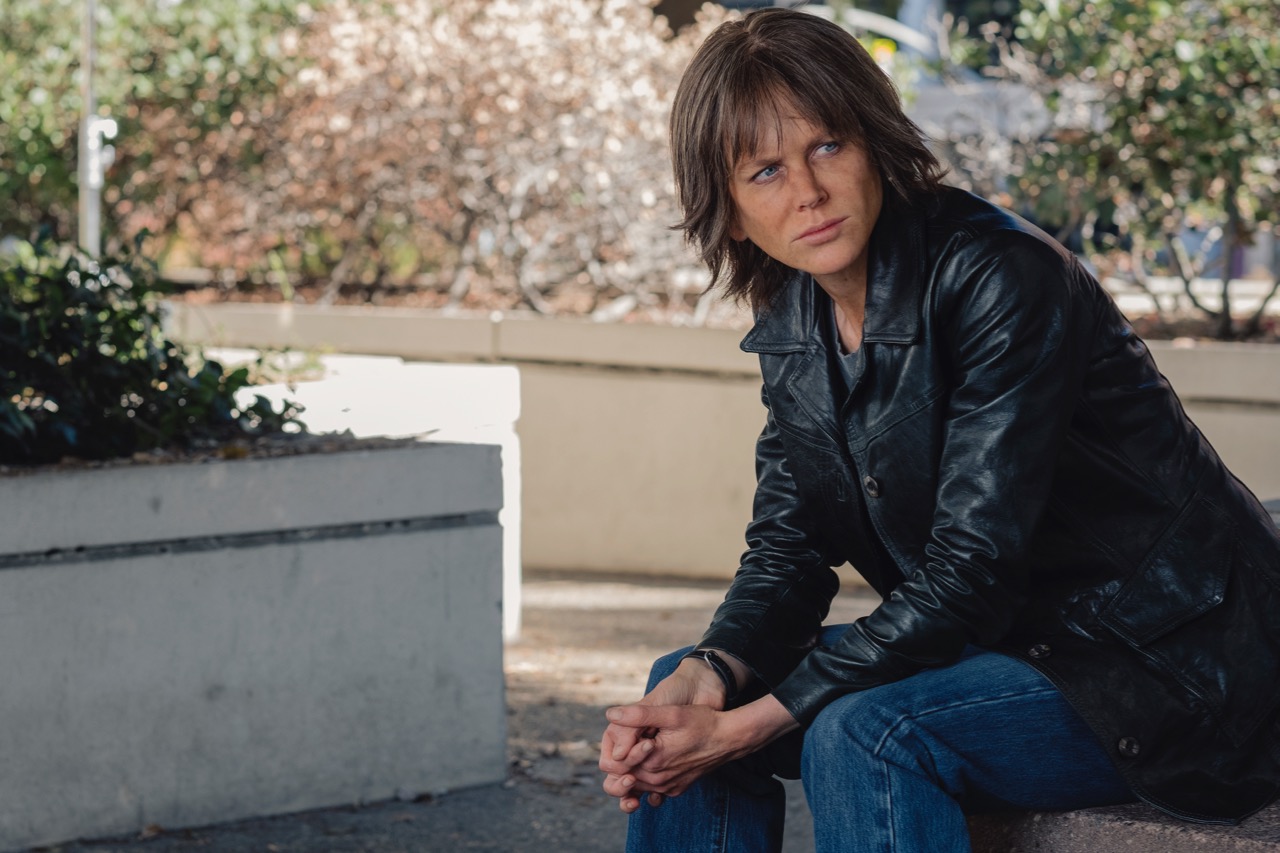 Watching Bell drive from one Los Angeles County locale to the next—a pursuit that takes her from the misery of Skid Row to the splendor of Palos Verdes—I held out some hope that Kidman’s character would prove to be as multifaceted as the melancholic SoCal gumshoes played by Elliott Gould in Robert Altman’s The Long Goodbye (1973) or Joaquin Phoenix in Paul Thomas Anderson’s Inherent Vice (2014). But as one of the few women protagonists in sunshine noir, that genre of films plumbing darkness in the Golden State, Bell is ultimately distinguished only by her gender. As arid as the cracked, chapped epidermis of its lead, Destroyer lacks the vigor and verve of Girlfight (2000), Kusama’s first feature (and the only so far that she’s also written), which gave another cine-species—the boxing movie—a rare female principal.

Many of Destroyer’s enervating qualities stem from the script, written by Phil Hay (Kusama’s husband) and Matt Manfredi, who’ve written all but one of Kusama’s four post-Girlfight films. The dialogue is frequently tumid with lazy tough talk: “This guy I’m lookin’ for? I own it. Just me,” Bell snarls to another cop, a dumb line made worse by Kidman’s uneasy command of noir-ese, an idiom that demands a much less strained dropping of g’s than heard here.

And yet everywhere strain is evident. Kidman and the filmmakers are unremitting in their determination to show us the effort required to portray such a dejected, dehydrated antiheroine, a role atypical of the A-lister, who appears in every scene. Whether the action involves Bell in an intricate shootout or merely in conversation in a dimly lit restaurant with her insolent sixteen-year-old daughter (a terrific Jade Pettyjohn, the only sign of life in this moribund project), the suffocating seriousness never abates: in Kidman’s too-studied slouchy carriage, in the interminable pauses between words when Bell tells her kid, “I. Do. Love. You.” (By the time we reach the end of that declaration, it feels as if another seventeen years have passed.) Not even a tableau as putatively gravid as Bell sprawled out on the floor after another bottle binge can elapse without superfluous portent, as the soused cop wakes up to see an ant scuttling past her. Kidman seems worried that the insect will upstage her.

All of Kidman’s showboating made me think of this zesty quote from Boyd McDonald (1925–93), the superb epigrammist and film critic: “There is something more impressive than a performer who tries so hard to please an audience and that is one who . . . seems disappointed that the audience has failed to please her.” In her consistent attempts to awe us, Kidman appears to believe that inhabiting a role is no longer enough—her transformation needs to register as nonstop Herculean labor.

The ignominies Bell must endure during her crusade to requite the dead and allay her own festering conscience—as when a recently sprung convict, one of the miscreants she ran with in her FBI days, scoffs upon seeing her, “Jesus, you look old”—double as perverse tributes to Kidman for defiling her flawless face. There is precedence in the actress’s oeuvre for this kind of disfiguring: recall the ridiculous, wholly unnecessary prosthetic schnoz she wore as Virginia Woolf in The Hours (2002).

Shortly after that movie, for which her adventures in extreme anti-cosmetology earned her a Best Actress Oscar, Kidman gave what I consider her greatest performance to date. In Jonathan Glazer’s magnificent, outlandish Birth (2004), which quickly vanished from theaters after its release, she stars as Anna, a widow persuaded by a grave prepubescent boy that he is the reincarnation of her dead husband. The film casts a spell, thanks primarily to one pivotal scene: a long close-up of Anna at the opera, slowly embracing the idea that this child’s absurd assertion could be a possibility. For minutes we witness emotions play subtly across Kidman’s face, that great terrain of cinema—one despoiled by the heavy industry of Destroyer.