The sullied Enlightenment of the body: the Metropolitan Museum hosts a major retrospective. 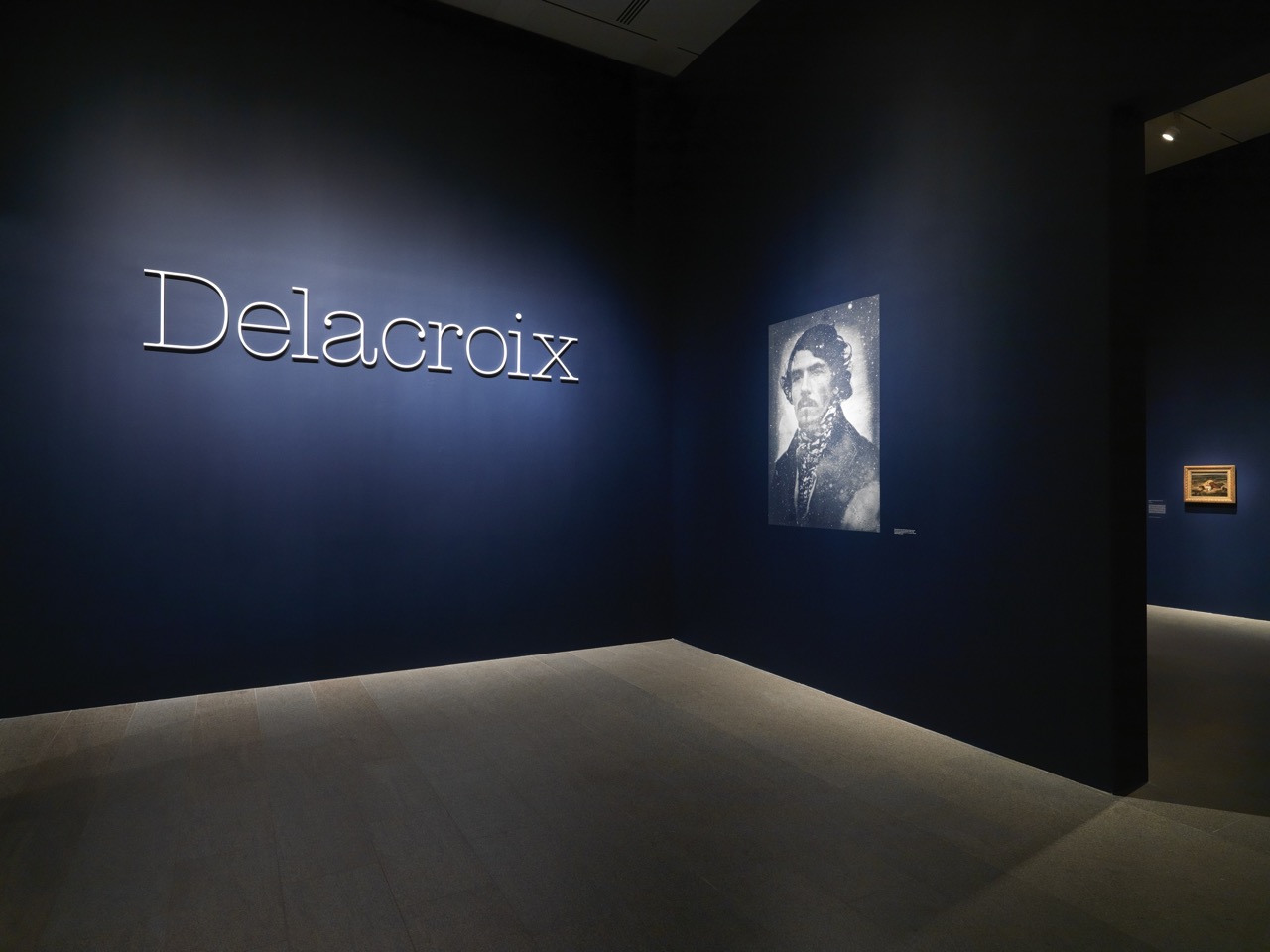 In photographs, Delacroix is posed magisterially like a senator, or a fierce “tiger poised for its prey,” as Baudelaire said in his study of the painter, now the subject of a major retrospective at the Metropolitan Museum of Art. But in real life Delacroix was small, frail, and sickly. This delicate man never married, had no children, no students, never even visited Italy, but he was passionate about his one true love: painting. “Painting, it’s true, like the most exacting of mistresses, harasses and torments me . . . Nothing else is of the least importance to me,” “the very sight of my palette . . . is enough to fire my enthusiasm,” he wrote in his journal, which functions as an exhaustive backstage pass to his mood swings.

Delacroix was by turns magnanimous, tender, curious, affectionate, loyal and then furious, dyspeptic, vain, melancholic, despotic. In the journal, he backstabs his best friend George Sand, accusing her of mediocrity; he finds Balzac dull and Poe incoherent. He is irritated by his peers, Poussin and Courbet among them: “Sometimes I long to throw Poussin out of the window.” And: “The vulgarity and futility of [Courbet’s] idea is what is so abominable . . . what are the two figures supposed to mean? A fat woman, back-view, and completely naked except for a carelessly painted rag over the lower part of the buttocks, is stepping out of a little puddle. . . . it is quite unintelligible.” He waxes eloquent and mundane about art supplies: “Grey is the enemy.” “Buy watercolors in tubes.” He is always caustic: “Concert at the Princess’s. It was unbearably hot, and there was an equally unbearable smell of dead rat . . . she was wearing a most unmanageable dress . . . This absurd mass of material makes all women look like barrels. . . . I was horrified by the faces of all those schemers and prostitutes.” 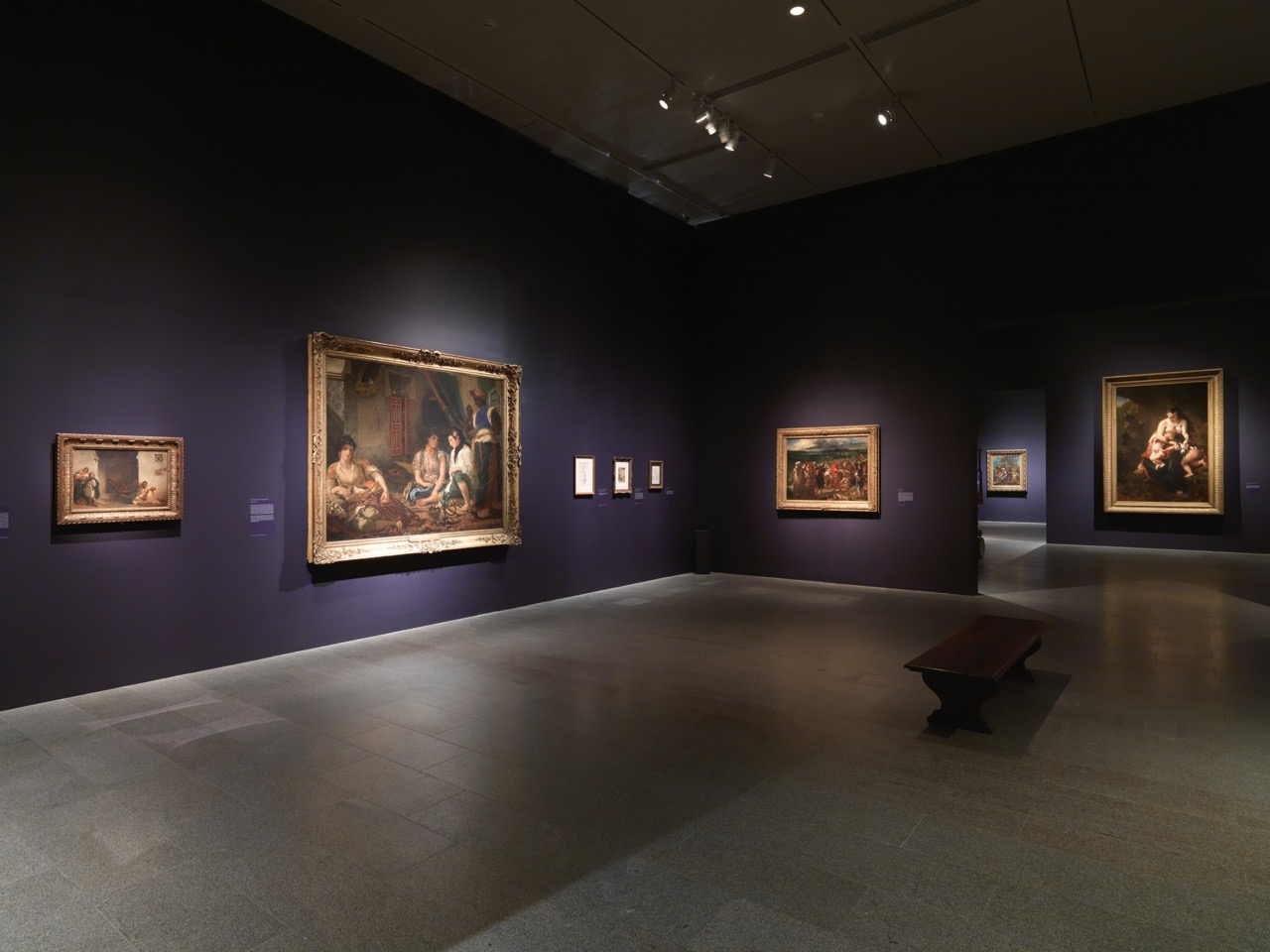 Delacroix was a snob, a petty aristocrat, a sexist, and a colonialist. You will likely be #notsurprised at his splayed-out women, “mysterious” imaginary Orient of Jews and Moors, or his endlessly masculinist portrayal of sex, violence, and battle. As a young man he was dandyish; he became increasingly absorbed in his work as he aged and withdrew from the boulevards of Paris to the countryside. But his journal reveals bombastic ambitions: “Glory is no empty word.” “Neglect nothing that can make you great.” Painting is “verve allied to power.” In other words, he’s full of it, and that attitude certainly became form in his work. 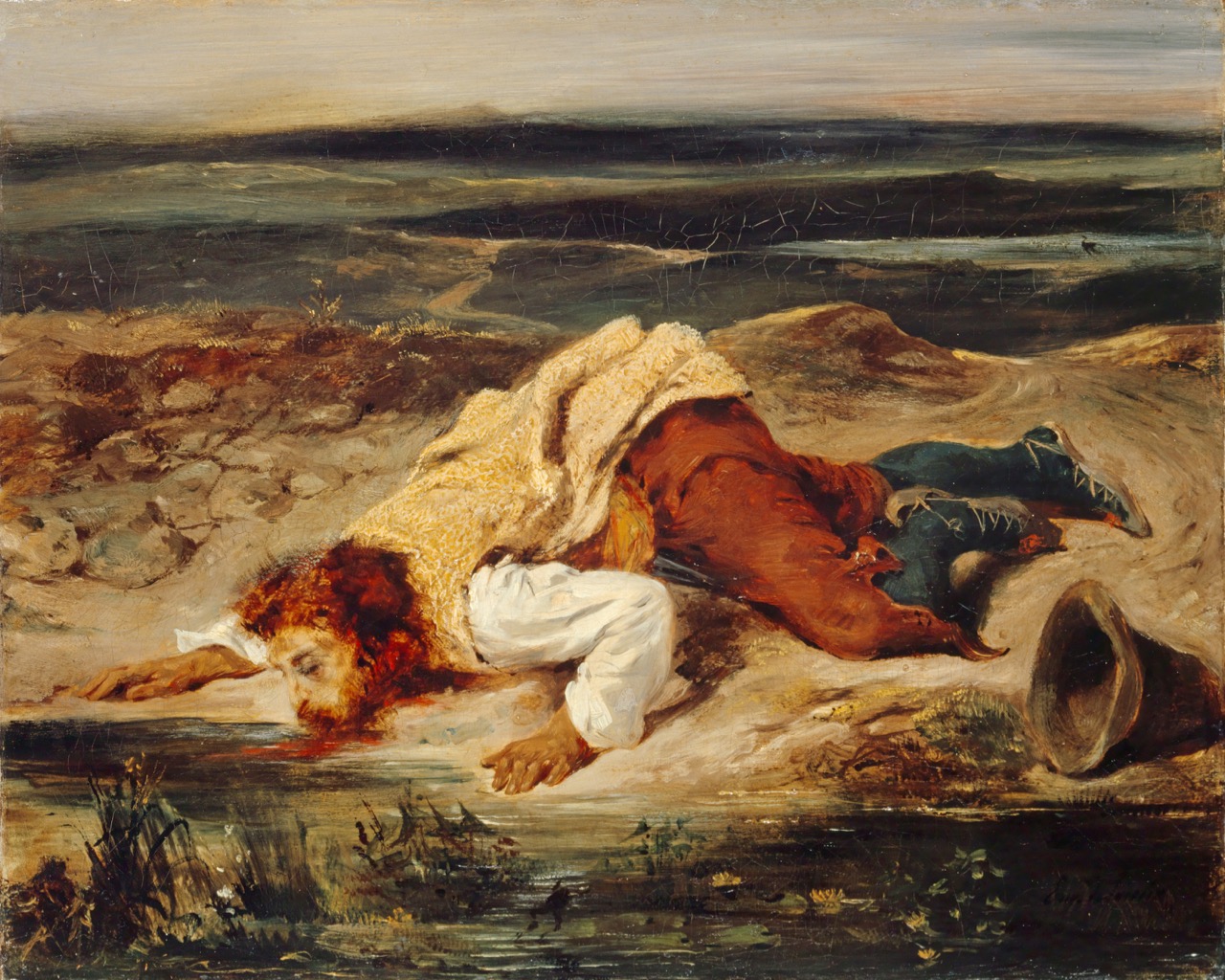 I don’t admire Delacroix’s vainglorious longing to seize women and territory, but I do love how he seized the surface of painting itself, and then twisted it into something alienated. He worked with the Romantic proposition that the artist’s touch itself is a mark of intelligence, but in his hands, the very idea of knowing becomes something unhinged, discomforting, on the verge of falling apart. It’s like the sullied Enlightenment of the body: Sade, not Kant. For comparison, swing by the Ingres room at the Met: Delacroix called his neoclassical paintings “stupid” and “vulgar.” Their subjects smile out at you with a stifling self-contentment that clarifies Delacroix’s bitterness, since what he was wrestling into painting was objectionable content and the decomposition of materials. To spread “good fat paint thickly,” he lets paint rip, drip, be raw liquids or solids—blood, sweat, tears; as one viewer described it, “harsh, coarse, rocky, rough, scruffy. Is it paint, or is it glue or putty?” Liquidity itself appears to be something life-threatening, and color a menacing force. In an early painting, Mortally Wounded Brigand Quenches His Thirst (ca. 1825), a dying soldier creeps toward a pond; the blood from his chest wound has mingled into the water and his final sip will be this red ooze. In The Shipwreck of Don Juan (1840), an apocalyptic boatload of the damned, clinging and grasping, are engulfed by the sea, a murderous deluge of green. And in The Death of Sardanapalus (1826–27), everyone goes down on the flaming plane of a red bedspread. 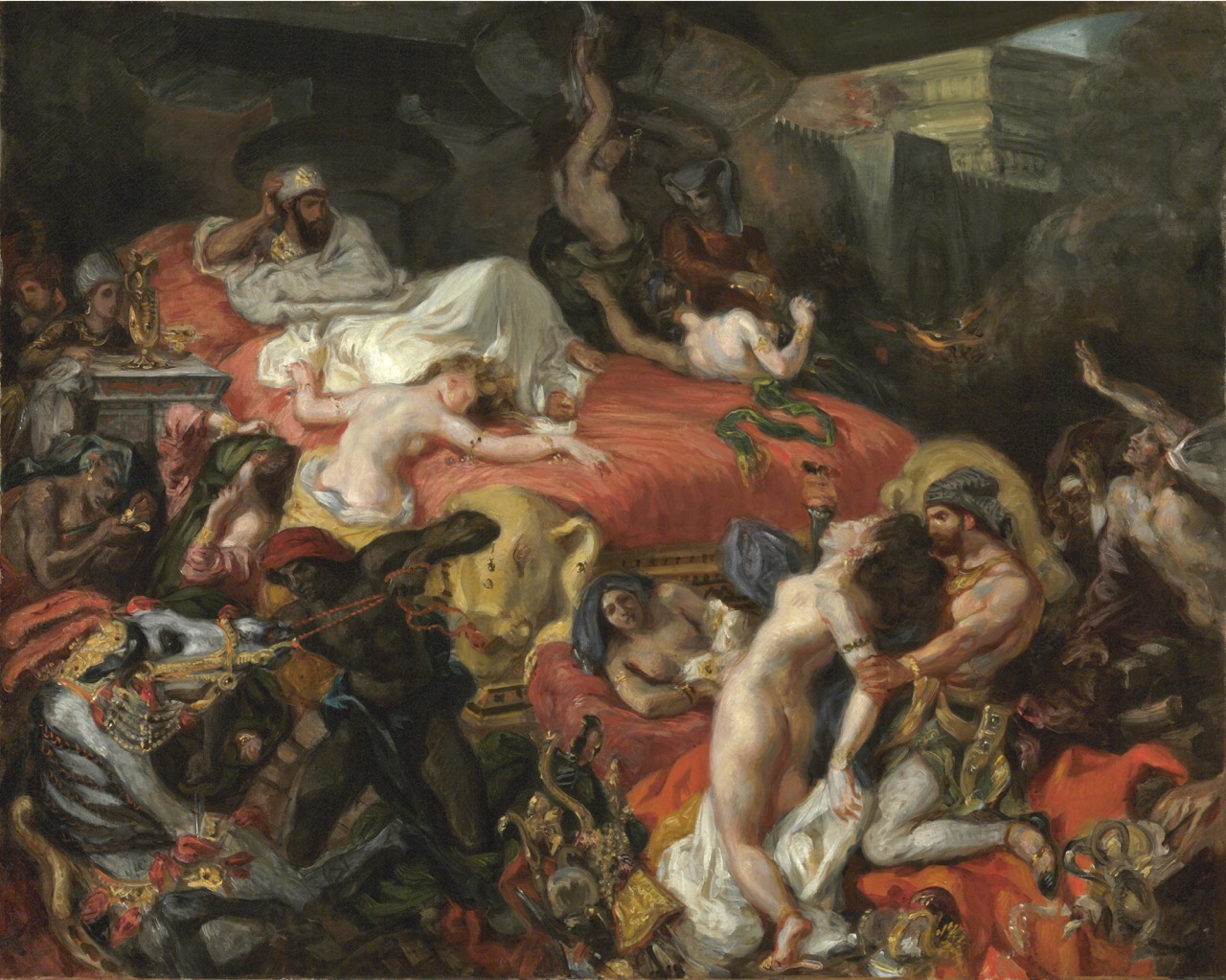 Delacroix made the picture plane something “bloody and animal and hot,” to quote art historian T. J. Clark. He painted in furious antagonism: against mechanization, boredom, mediocrity, gaps of memory, the conventions of neoclassicism, and the moralism of realism. (“Realism should be described as the antipodes of art . . . detestable.”) Delacroix’s negative affect and negative spaces always excite future painters. Cézanne said it: “We all paint in him,” meaning anyone who’s against painting as merely something Beautiful or Good. Walking through the show for the umpteenth time, I thought about the many painters I love whose work emerges from this kind of meat and motion: Turner, Kandinsky, Soutine, Kokoschka, Matta, Pollock, Guston, Mitchell, Rauschenberg, Jorn, Fontana, Schneemann, Nelson . . . (One painting was so close to a Cecily Brown that I texted her, jokingly: “I love your painting at the Met!”) 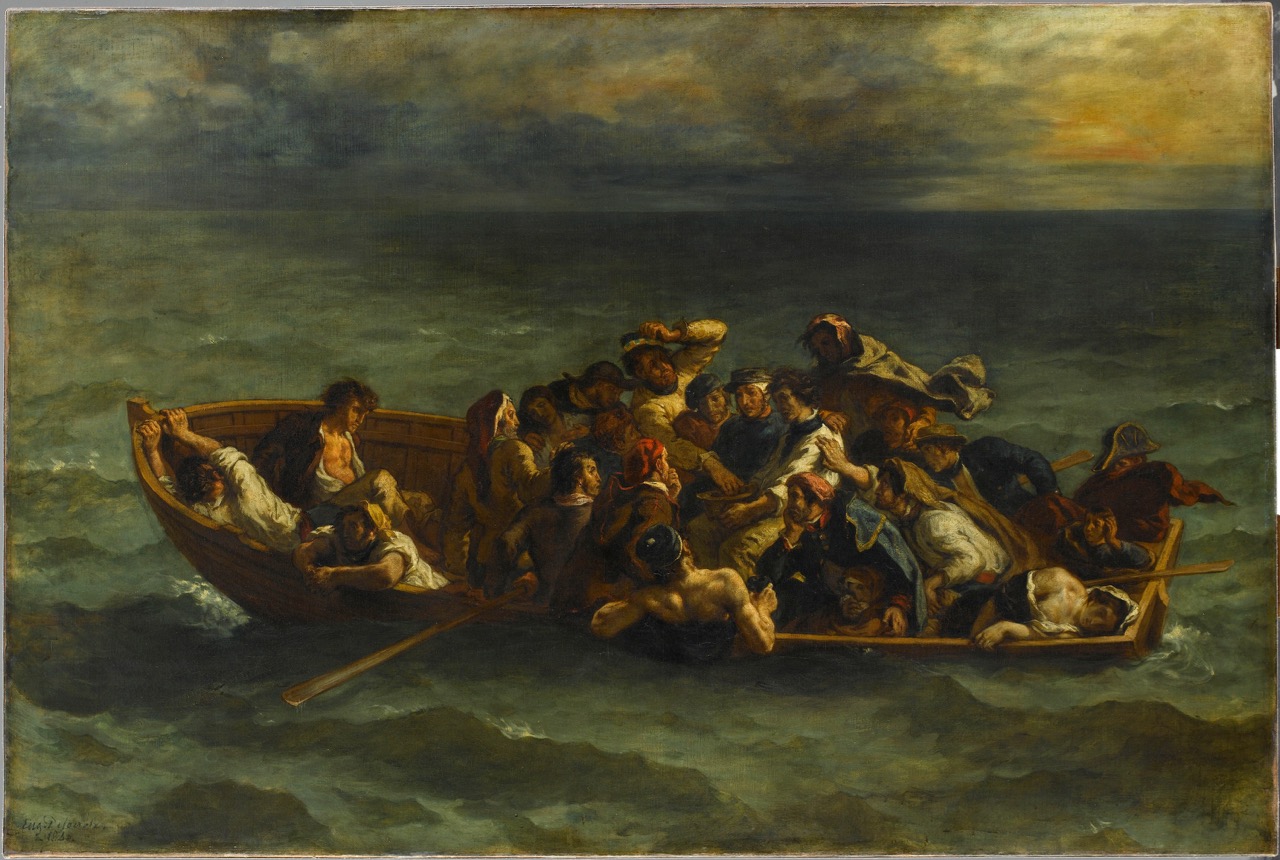 Delacroix’s world is one of jarring transitions and negative dialectics, where humans are indistinguishable from animals, bouquets are whirlwinds; riots, wars, and mayhem flatten into darkness, and people become miasmatic abstraction. Spatially, his paintings shirk the pictorial task of leading you from foreground to vanishing point by way of a sensible middle ground. Instead, Delacroix’s painting space heaves you around in an imaginary bellows that compresses, squeezes, and then releases you. The lower sections of his canvases are literal floors cluttered with gravity-bound impediments, broken stones, fragments of limb, branch, sword, hat, cloth, dropped on the ground. The stuff coalesces in the central zones of Delacroix’s paintings as a kind of clump, usually either a churning mass that writhes upward, or a wall-like blockade of people that huddle across the picture plane. Behind or above all this tumult lie patches of shimmering sky or incongruously beautiful clouds, getaway spaces from the central trouble. But there’s no middle ground. The only intermediary force that touches both foreground people and background chroma is a kind of atomic state change whereby flesh becomes dust, spill, vapor, darkness. The painter’s famous idea was that paintings are bridges to the souls of the spectators—but I think his paintings are more like planks thrown over his own abyss. 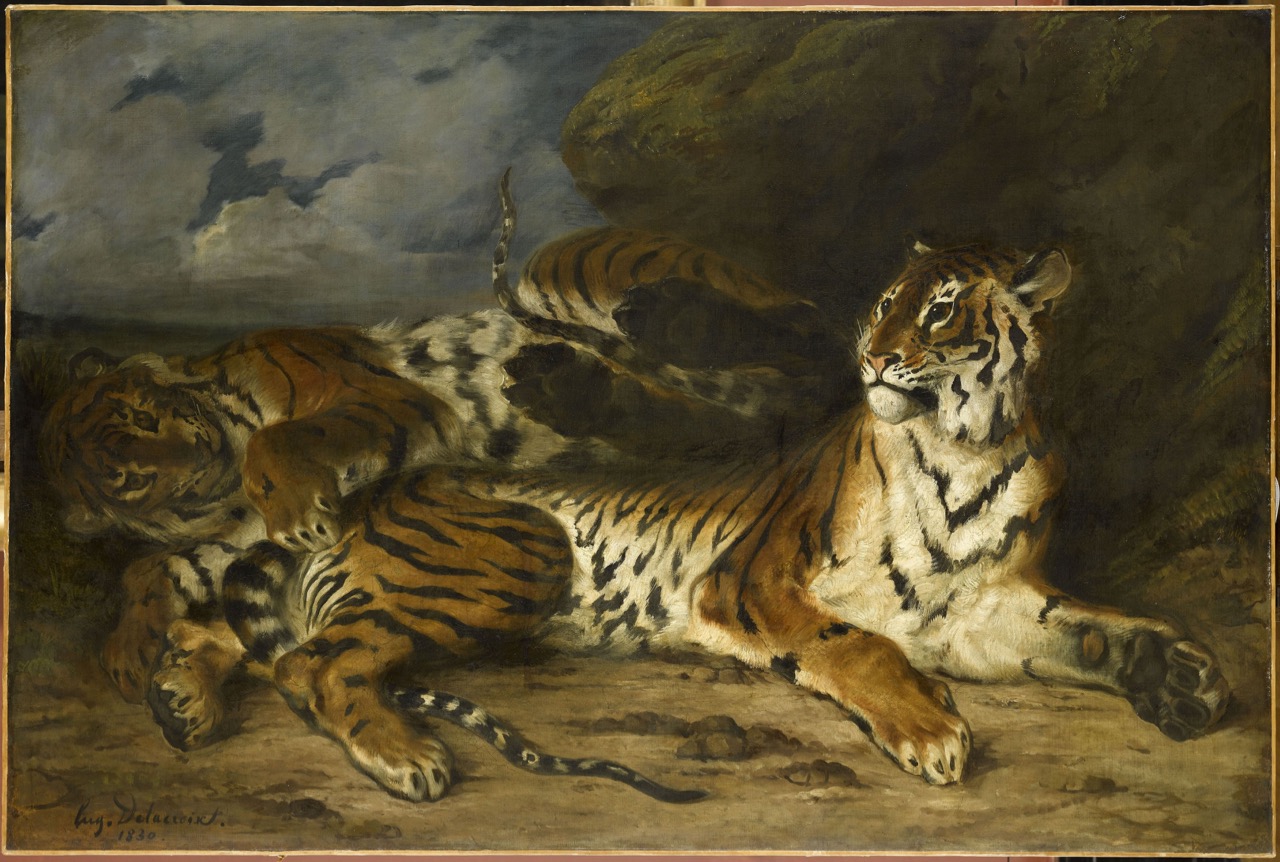 Delacroix deplored the gaps in his own memory, and wrote his journal partly just to shore it up. His paintings are likewise haunted with gaps: holes, little black wounds, sudden flatnesses, looming shadows of doorways and cabinets, reversals, scumbles into incoherence. Wherever these gaps occur, a kind of momentary breakdown is suggested, a confusion, a memory gone frighteningly blank, the mind’s eye punctured. These little moments of aporia are choreographed by Delacroix as calculated lapses in the palpability of narrative. In Young Tiger Playing with Its Mother (1830), the outlines of a tiger’s huge feet loom, irrationally large and flat, against the front of the picture plane. In the sketch for Medea About to Kill Her Children (c. 1836), Medea’s leg spills out of her body like a spectral X-ray in varicose red. In Delacroix’s exquisite drawings, like Faust and Mephistopheles in the Tavern (1825/26), shadows become inky black shapes licking through the legs of the devil’s drinking buddies. 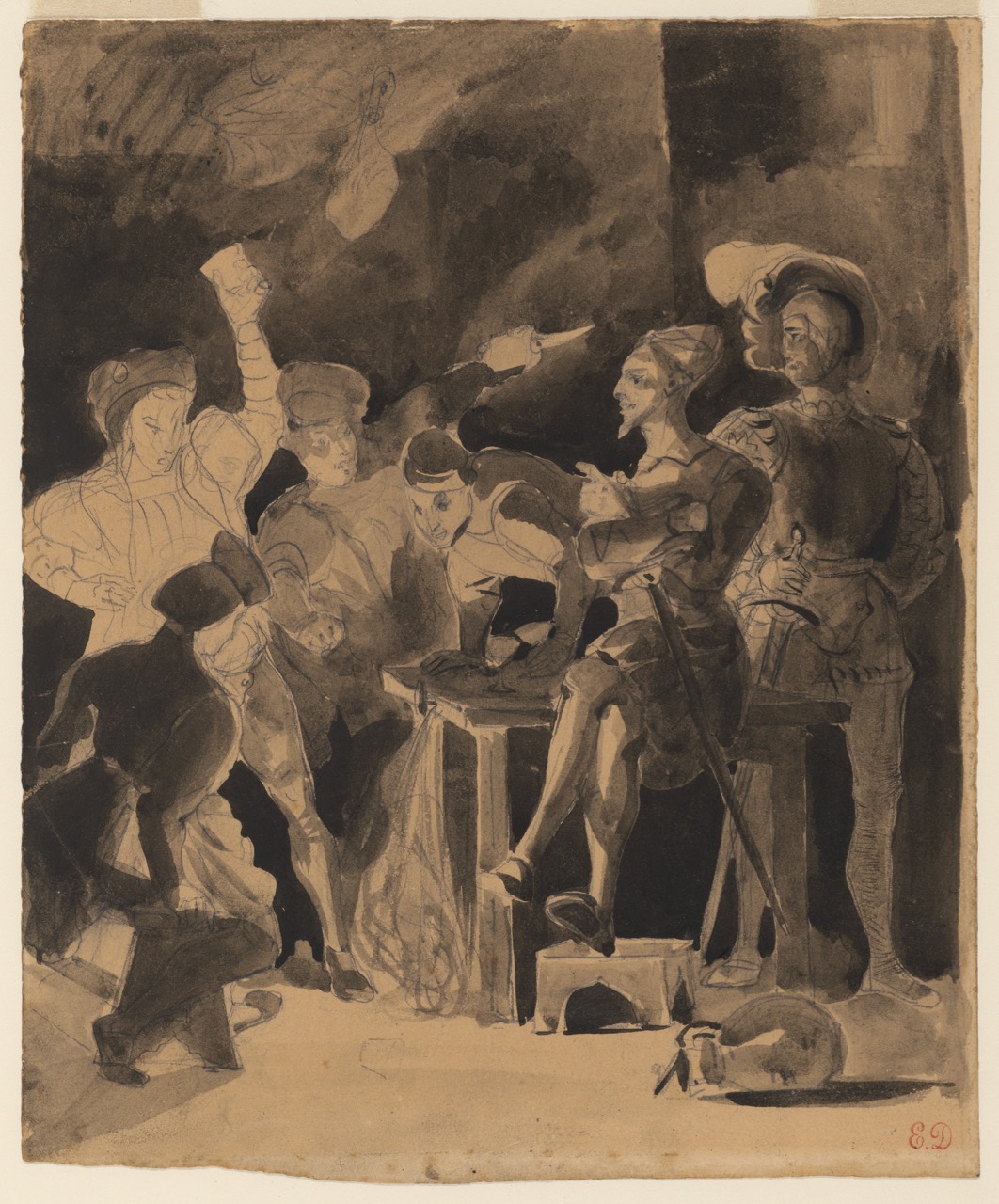 In prints and drawings, and especially the astonishing room of Faust prints shown at the Met, you can most clearly see how Delacroix’s ideas and things jumble up into scribbled tangles of notational no-thing, and that’s where his work feels most immediate and most modern. The show gives us a view of Delacroix as an artist whose historical aspirations were constantly being dragged into an undertow of the here and now. And it lays bare drawing itself on a granular level as essentially a synesthetic act of touching-thinking-feeling all at the same time, working from not-knowing, almost like groping in the dark. It’s a very modern feeling.

Amy Sillman is an artist based in New York City. Her work and interests include painting, drawing, prints, animation, and writing. She currently holds a position as professor at the Staedelschule in Frankfurt. Her solo show Landline, which includes paintings, drawings, animations, prints, and zines, is now on view at Camden Arts Centre in London, and runs until January 6, 2019. Sillman is represented in New York by Gladstone Gallery.