A movie about TV turned to theater: Ivo van Hove and Bryan Cranston bring an adaptation to Broadway. 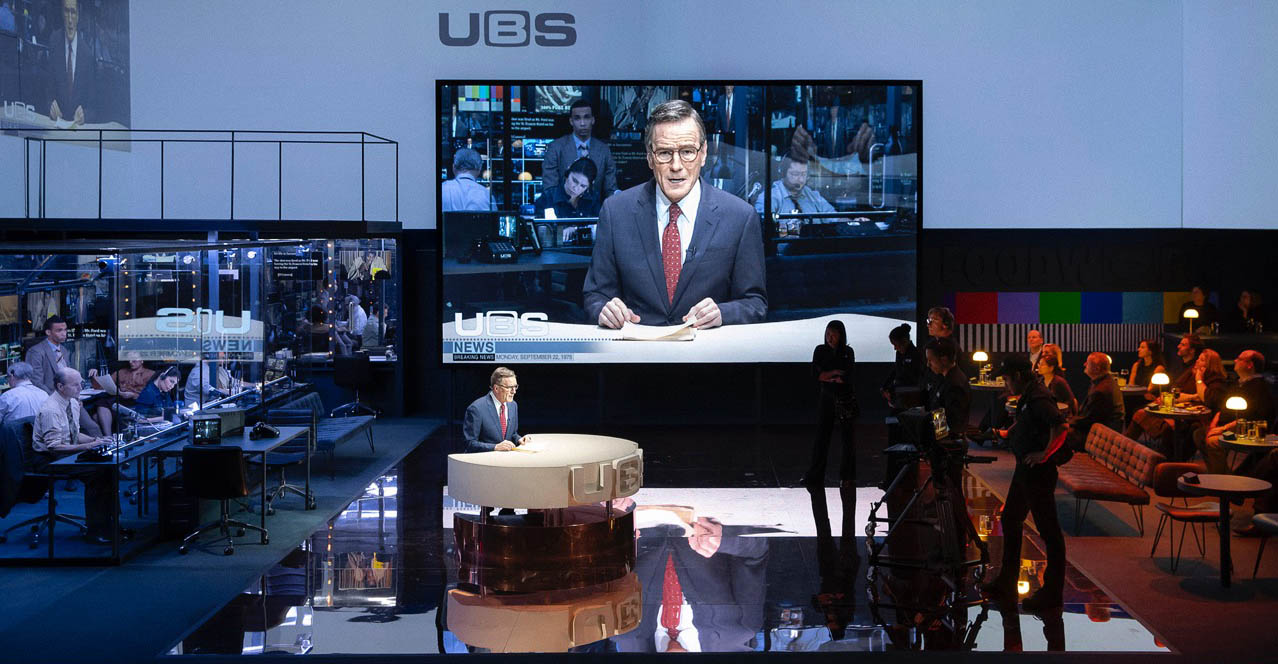 About two-thirds of the way through Network, comprehension dawns. Up to that point, a lot about the bells-and-whistles Broadway version of the 1976 movie has been irretrievably confusing—director Ivo van Hove has crammed every multimedia gimmick he can think of into it, the result about as narratively clear as a night spent flipping TV channels. Nothing, though, has been as weird as the fact that there’s a functioning restaurant onstage at the Belasco Theatre. A slice of the audience takes up the right sixth of the playing area, eating a multicourse dinner at a dimly lit boîte. Waiters tiptoe around. The diners’ sightlines must stink. They paid four hundred bucks for those seats. So . . . why?

To get it, you need to understand how little the stage-qua-stage matters in Network. In fact, Van Hove, his set designer Jan Versweyveld, and video designer Tal Yarden wouldn’t mind if you barely glanced at it. There’s a massive screen at the back of the stage, and everything is offered up in service to its huge god-face. As the show happens, technicians prowl the action with Steadicam rigs, shooting up-close reactions, sex scenes, newscasts, tête-à-têtes. Nearly the whole shebang is delivered right into those cameras; they take our attention and the performers’ too. The embittered news anchor Howard Beale (Bryan Cranston) goes loopy on the seven o’clock broadcast, and we watch it in smash-zoom high-def on the back wall’s movie screen—largely ignoring Cranston’s world-caliber acting happening just in front of us. 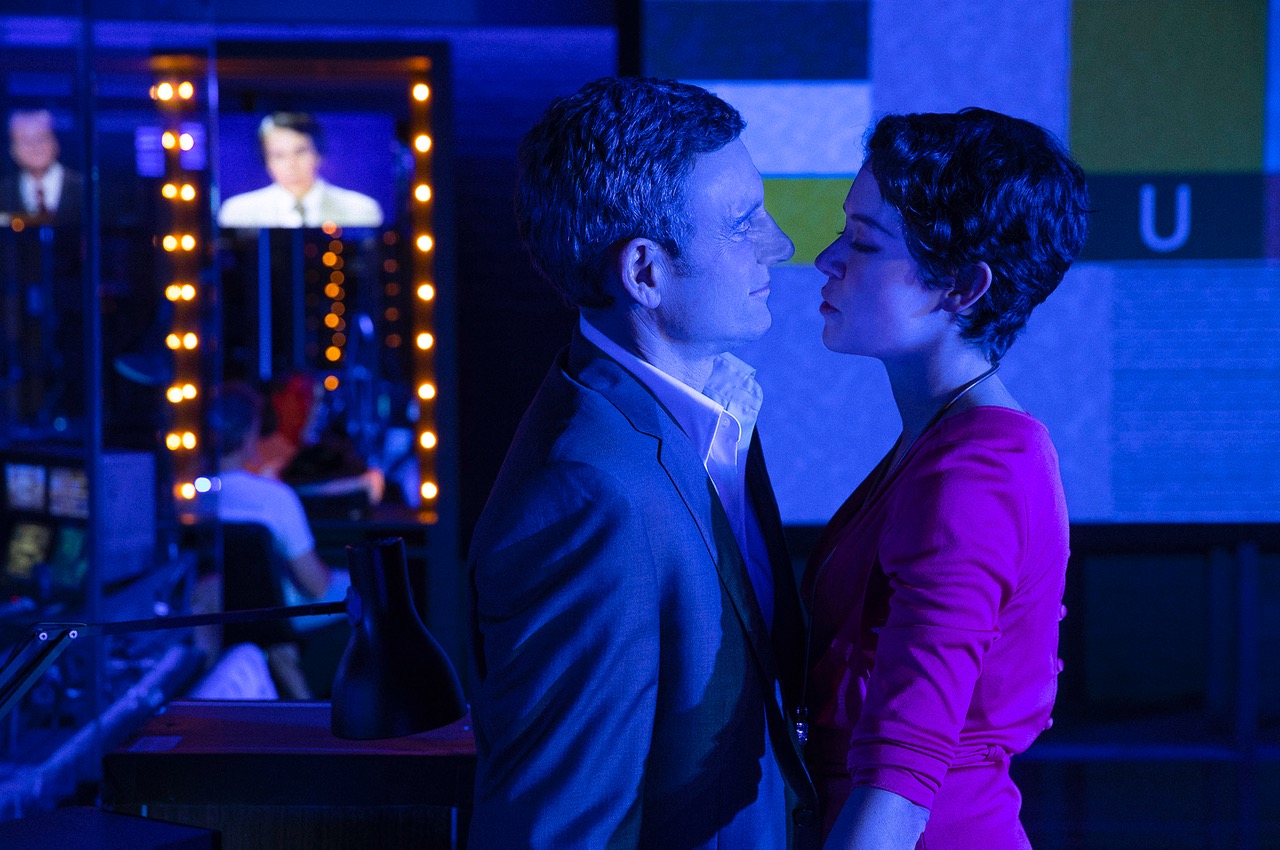 At that two-thirds point, we see the video-feed switch to outside the theater. They’re on Forty-Fourth Street, shooting live, with Beale’s sympathetic ex-news producer Max Schumacher (Tony Goldwyn) and hard-as-nails features producer Diana Christensen (Tatiana Maslany) making eyes at each other. They smooch loudly into their microphones as Midtowners bustle past them, then they decide to go to dinner. “I know a place around the corner,” says Max. They walk up the alley, through the stage door, and into the onstage restaurant. That’s it. That’s the reason. A seduction scene needed a backdrop of a few people eating, so the Belasco has been turned into break-the-bank dinner theater.

An elaborate windup for a fleeting visual payoff is a Van Hove signature. His beautifully performed A View From the Bridge, for instance, culminated in an apocalyptic “blood rain,” but the effect meant that (a) part of the audience couldn’t see well because the playing area was stuck beneath a big blood-rain tank, and (b) the theater smelled like V8. Is Van Hove a fraud? A visionary? Should we even worry about it, when he’s the only director who manages to get gorgeously designed Euro-chic drama onto Broadway? Some of us are just . . . grateful. But Network is far from his best work, playing as it does into his worst tendencies. These include getting some of his aesthetic kicks from “quoting” authoritarianism and misogyny (no matter what the ladies wore in the movie, here they dress sexy-wexy) and taking a laissez-faire attitude to actors overwhelmed by his camera-heavy techniques. 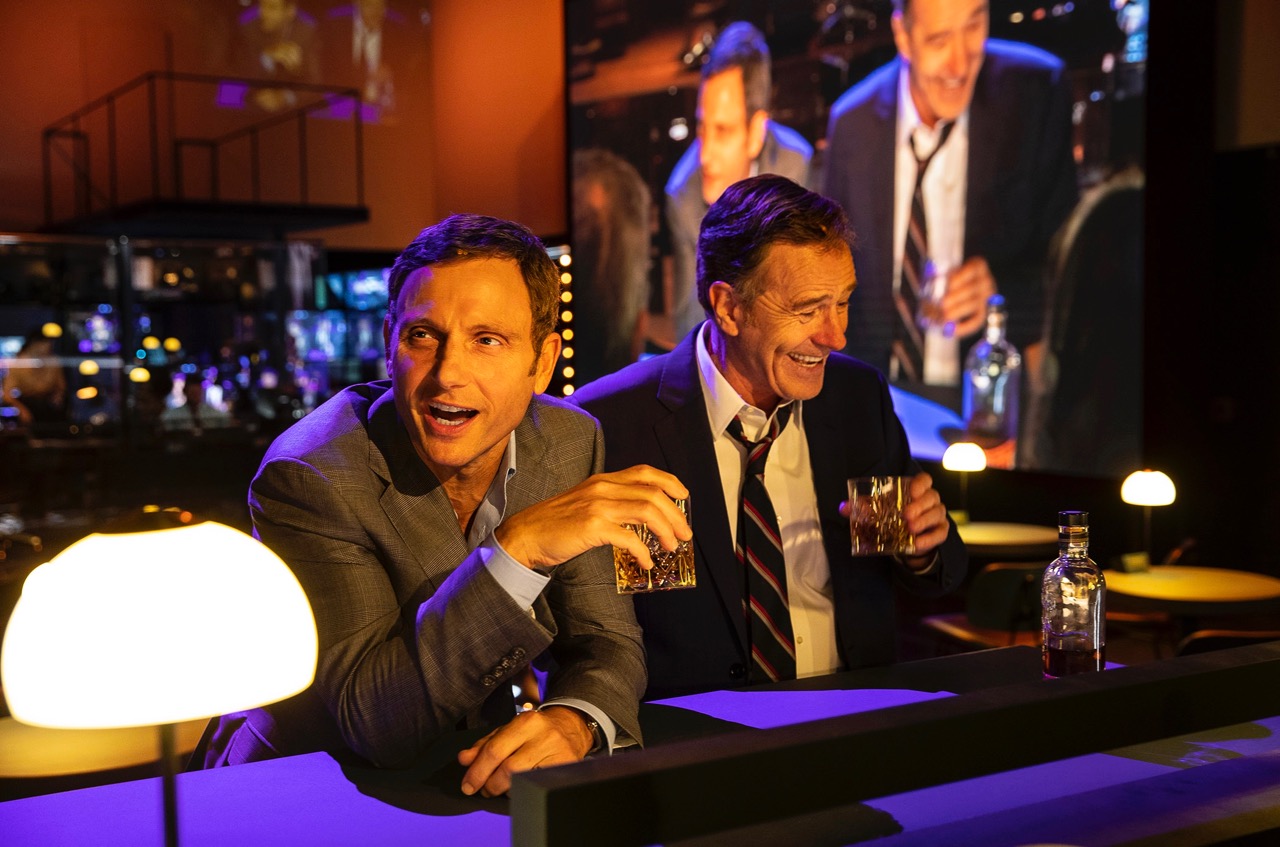 Stage-film interplay has worked beautifully for Van Hove before (I wept over it in my 4Columns review of his Kings of War), but he needs actors who can function in close-up and proscenium modes simultaneously. Cranston can, but precious few others in Network manage: performances range from wooden to metallic. Goldwyn is some of the worst of it; he sticks out his chest and stamps like a horse, missing any opportunity to make his character sorrowful, self-aware, self-sabotaging, or human. And in response to her thinly written brass-bitch character, Maslany has gone completely dead in both face and voice. If you watch her when she’s off to the side of the action, you see amusement flickering across her mouth—the actress is thinking something, but she’s keeping it out of her performance. 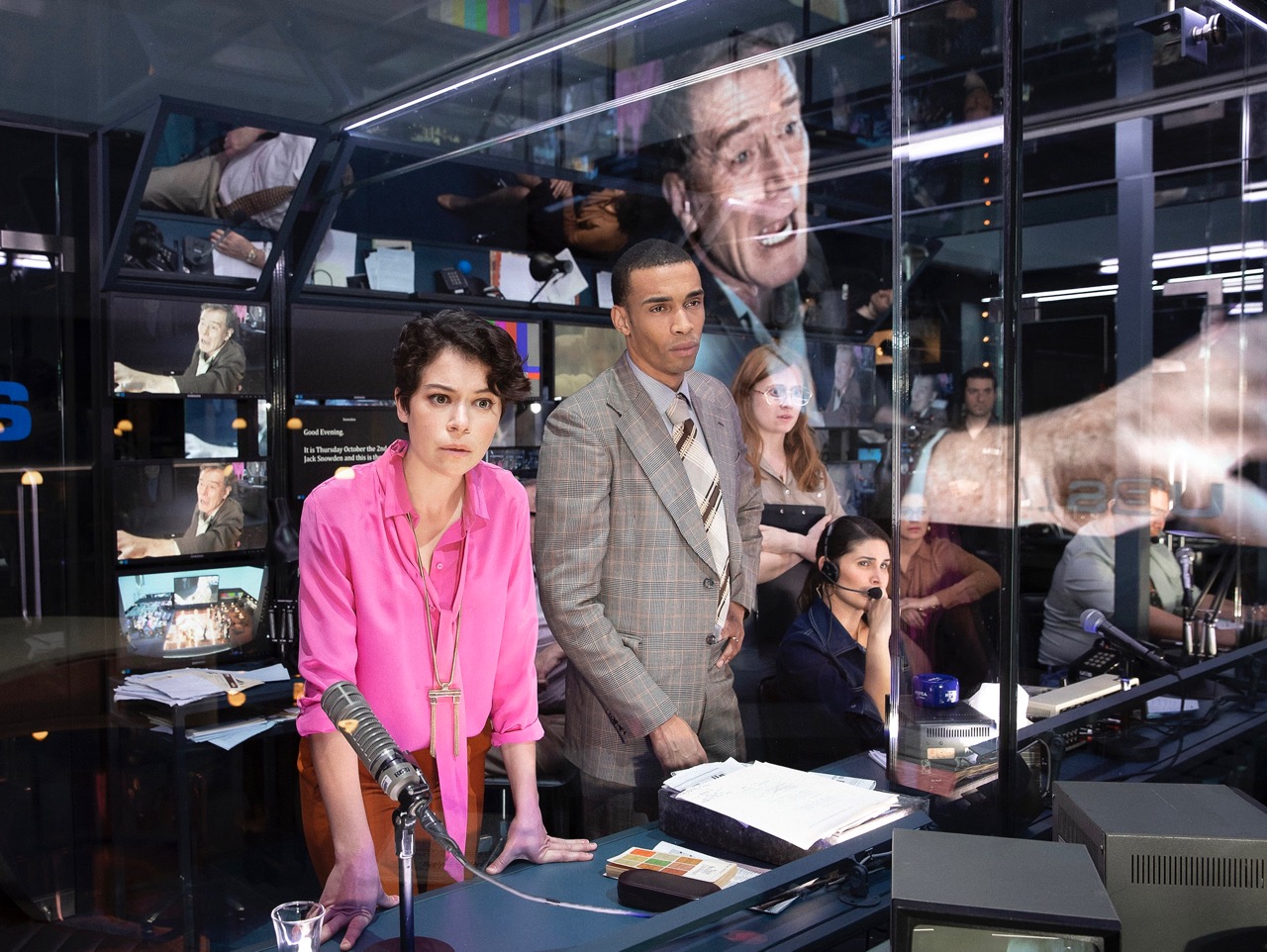 And all of us are clearly supposed to be thinking. When Network played in London, it was heralded by critics as being an incisive comment on the rise of newsertainment. That’s a worthwhile issue, and yet a show so crammed with soupy underscoring (Eric Sleichim’s music is exaggerated to the point of parody) and distracting whizz-gizmo camerawork (a grid of ’70s commercials plays behind many scenes) has a hard time making a case for careful analysis. One thing that does seem obvious, though—the movie fights against being turned into a stage play.

To chart it simply as a plot: Howard Beale gets fired for having low ratings. During his announcement of his departure, he informs the home audience that he plans to kill himself on air. He does not, at this point, seem unhinged. The next night, he’s allowed back on to apologize, then does go bonkers. The bonkersness gets great ratings, and the network decides to leave him on the air. Max worries over his old friend’s illness; Diana rides it to the top of the charts. Soon Beale is part of a hit TV show, and his legendary cry “I’m mad as hell and I’m not going to take it anymore!” has turned into a catchphrase. The studio audience (played by us) roars it back to him on cue. 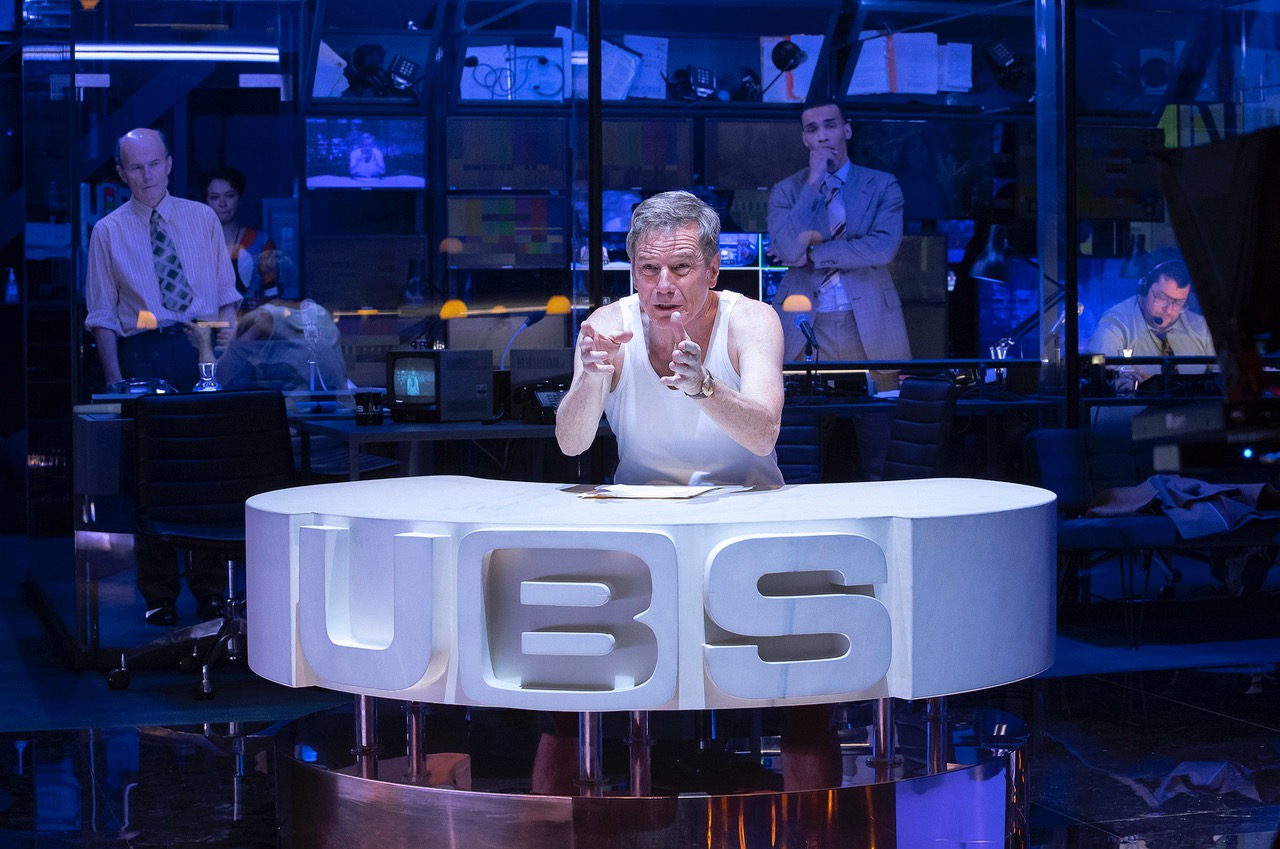 The action continues to seesaw. Does Beale belong on- or off-air? Is he suffering or liberated? Is he a mouthpiece for sadness or for rage? Anti-corporatism or corporatism? Lee Hall’s mostly faithful adaptation follows Paddy Chayefsky’s prescient but flawed screenplay in flip-flopping among these options. In the original movie (directed by Sidney Lumet), the actors’ vivid performances and Chayefsky’s satirical extremism supercharged everything. But these days this particular story can’t play as an absurdist cri de coeur. We no longer find it surprising that something might be marketed as news that isn’t, and without that built-in shock value, we see that Chayefsky’s teeter-totter structure and paper-doll characterizations are not actually built as good drama.

Hall edits out most of Chayefsky’s digs at the left—we don’t see the “badass commie” Ecumenical Liberation Army negotiating its broadcasting deal anymore—and for some of us, the piece now will seem entirely an easy indictment of the right. A post-curtain-call clip reel of presidential swearings-in indicates that the production wants us to link Beale’s outrage culture to our post-’70s politics. Yet the message is still the medium, and Van Hove’s medium is razzle-dazzle. This spectacle-drunk spectacle—glitzy nonsense dressed up as thinking—is exactly what Chayefsky critiqued. Whatever the screen wants, the screen must have. The waiters literally dish up what the consumers asked for. The music tells us how to feel. There’s not a lot to learn from this version of Network, unless it’s that TV stars can still do any crazy thing, and the people will come. I’m not mad, exactly. But people sure as hell shouldn’t buy tickets to it anymore.