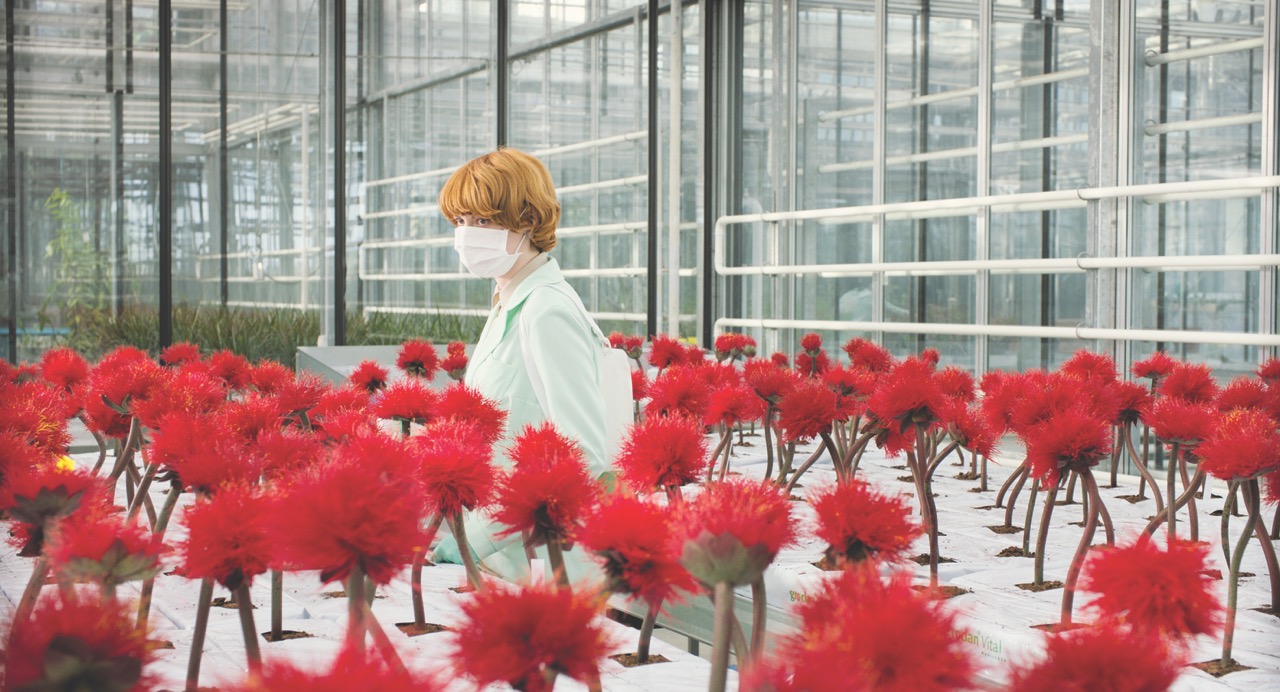 Rich in ambiguities and absurdities, the films of Jessica Hausner handle weighty topics with a light touch. Lourdes (2009), for instance, concerns the ways that the miraculous is downgraded to the bureaucratic, as a wheelchair-bound woman named Christine, who appears to have been divinely cured of her paralysis at the eponymous Catholic-pilgrimage site in southwestern France, must have this act of God officially certified by the town’s medical office. Gently demystifying the putative grandeur of Romanticism, Amour Fou (2014) recounts the real-life 1811 double suicide of the German writer Heinrich von Kleist and his friend Henriette Vogel, a solidly bourgeois wife and mother: this annihilation, conceived as the purest expression of love, is here shown to be a prosaically transactional pact.

Little Joe, the Austrian filmmaker’s fifth feature (which she wrote with Géraldine Bajard), and her first in English, may be her most ambitious disquisition to date, taking on genetic manipulation, the wellness-industrial complex, and mother-child bonds, among other subjects. Like its predecessors, Little Joe asks more questions than it answers; its uncertainties have the tonic effect of leaving the spectator feeling slightly off-balance, not lectured to. 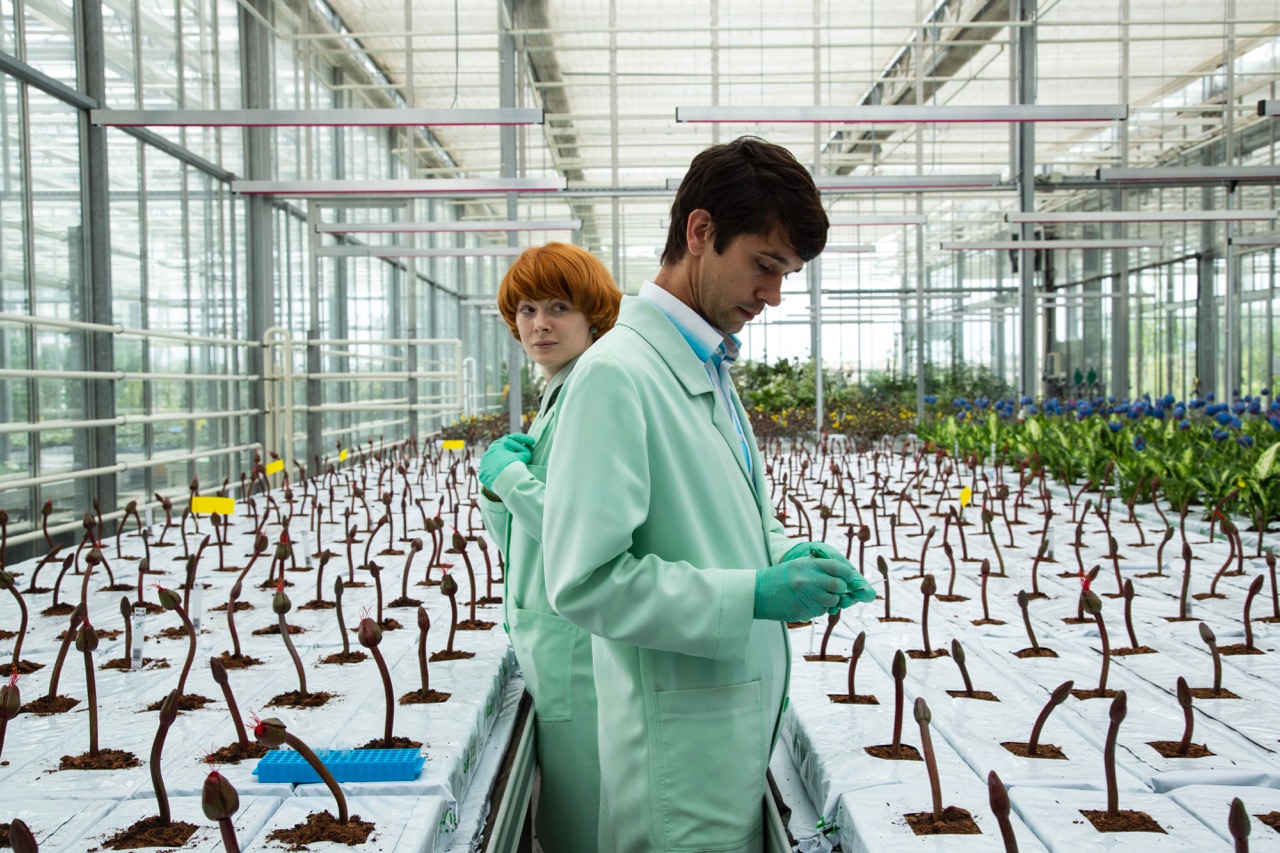 The opening scene crisply establishes this unmooring. We are inside the greenhouse of the British corporation Planthouse Biotechnologies, where the rigid order suggested by the tidy rows of flora is deranged both by what we hear—a tinnitus-like buzz followed by a doleful Japanese flute—and the movements of the camera, positioned overhead and slowly rotating 360 degrees. Senior breeder Alice (Emily Beecham) explains to her colleagues that she and her team have finally succeeded in genetically engineering a plant that emits a scent that makes its owner happy and fosters intense attachment. “You’ll love this plant like your own child,” she says to polite chuckles.

Alice tests this theory by bringing one of the crimson-colored shoots to the home she shares with her son, Joe (Kit Connor), who’s just crossed over from tweenhood to adolescence (the boy sees his recluse dad on weekends). They call the plant Little Joe—the moniker will later be applied to the whole species—and the teenage lad does indeed become fascinated with his namesake. But a whiff of its pollen seems to transform the congenial kid into a stroppy ingrate who hectors his mother, with whom he had shared an easy rapport. Similarly, the beloved dog of Bella (Kerry Fox), a veteran employee at the biotech firm, turns aggressive after the pooch sticks its snout into the herbage. Little Joe may have a salutary effect only on Bella, a once querulous, mentally fragile woman who grows noticeably buoyant after exposure to the plant. 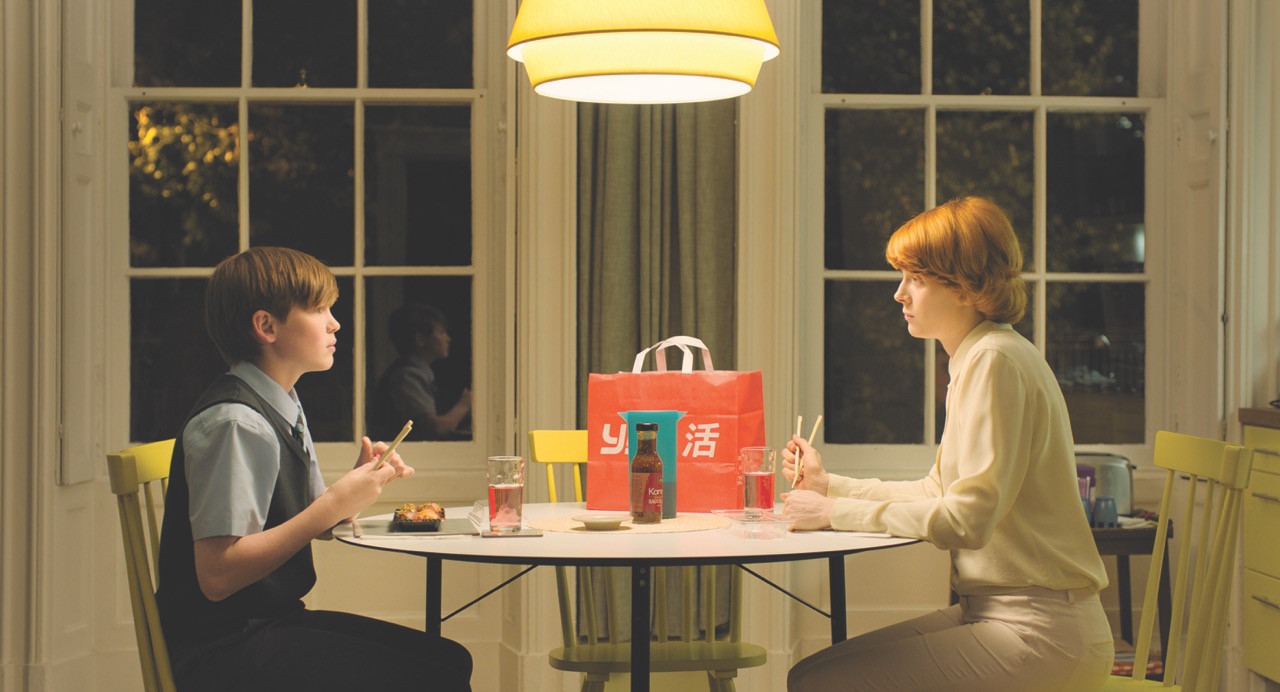 Or is her enhanced mood—and the newly sour dispositions of Joe and the hound—merely a fluke? “Who can prove the genuineness of any feelings? Moreover, who cares?” snidely retorts Karl (David Wilmot), Alice’s mercenary superior, after she voices concern that the plant is still too dangerous to be sold to the public. Hausner has no ready response to the query. Yet she is fascinated by feelings, or, more accurately, their concealment. She is a superb investigator of dissimulation and the pathologies of group dynamics, especially in that most pixilated of environments, the workplace. The Planthouse staff feigns camaraderie, but the men in the company—including Chris (Ben Whishaw), whose unrequited crush on Alice curdles into venomous passive aggression, and the overweening twerp Ric (Phénix Brossard)—are incorrigible eye-rollers, gossips, and underminers. (Hausner’s second film, 2004’s Hotel, about a new employee at an inn deep in the Austrian Alps, also mordantly examines poisoned relationships among coworkers.)

But the character who proves the most elusive is Alice; her enigmatic qualities make her an archetypal Hausner heroine. Like Christine in Lourdes, the geneticist gives the impression of being not wholly at ease with her peers, and, as with Henriette in Amour Fou, who dies right as she is on the verge of making a declaration, Alice often seems to be holding back. Even in her sessions with her therapist (Lindsay Duncan)—episodes that traditionally feature a character at her most unvarnished—Alice appears detached, removed from her own roiling emotions. “That’s my job—handling the unpredictable,” she tells her shrink. Tasked with rapidly responding to biotech experiments gone awry, Alice comports herself with an eerie equanimity; Beecham’s astute performance of this unsettling composure earned her the Best Actress prize at Cannes earlier this year. 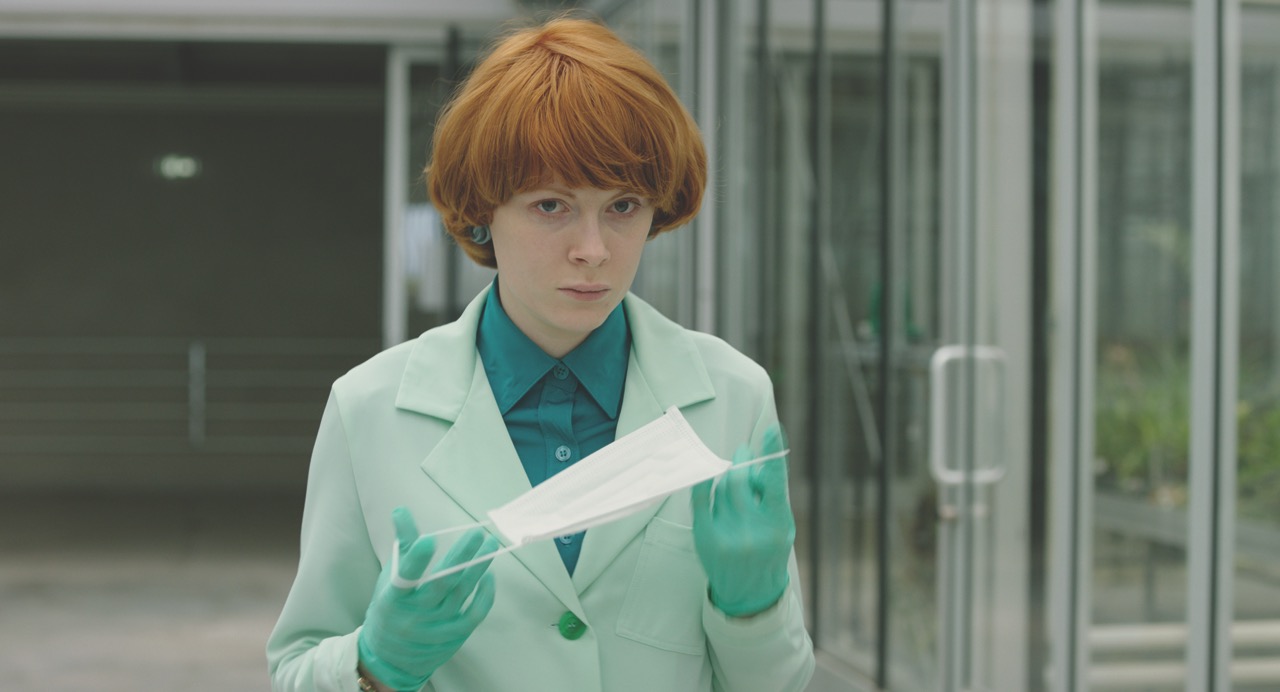 Underscoring Alice’s remoteness—and the film’s subtle humor—are her out-of-time coiffure and clothing. Her thick ginger hair styled into a pageboy, Alice evokes a lesser 1970s pop-cult avatar: Toni Tennille, maybe, or Joy from The Bugaloos. Also recalling that decade are the butterfly collars that jut out from her workplace’s standard-issue crème-de-menthe lab coats; at home Alice favors a tracksuit of palest pink, athleisure wear that replicates the warm-up attire of ’76 Olympians.

These particulars of color and cut typify Hausner’s talents for precise (but never obsessive) compositions: a mise-en-scène that delights the eye while disquieting the mind. Even a detail as seemingly insignificant as the contents of the dessert case at the Planthouse cafeteria rivets. As the camera tracks right to left, following Alice and Chris as they push their lunch trays toward the cash register, cheery-looking baked goods straight out of a Wayne Thiebaud canvas give way to enormous confections with bizarre hues. The piece of three-layer cake slathered with manganese-violet frosting that Alice adds to her plate could itself be the product of haphazardly regulated bioengineering. 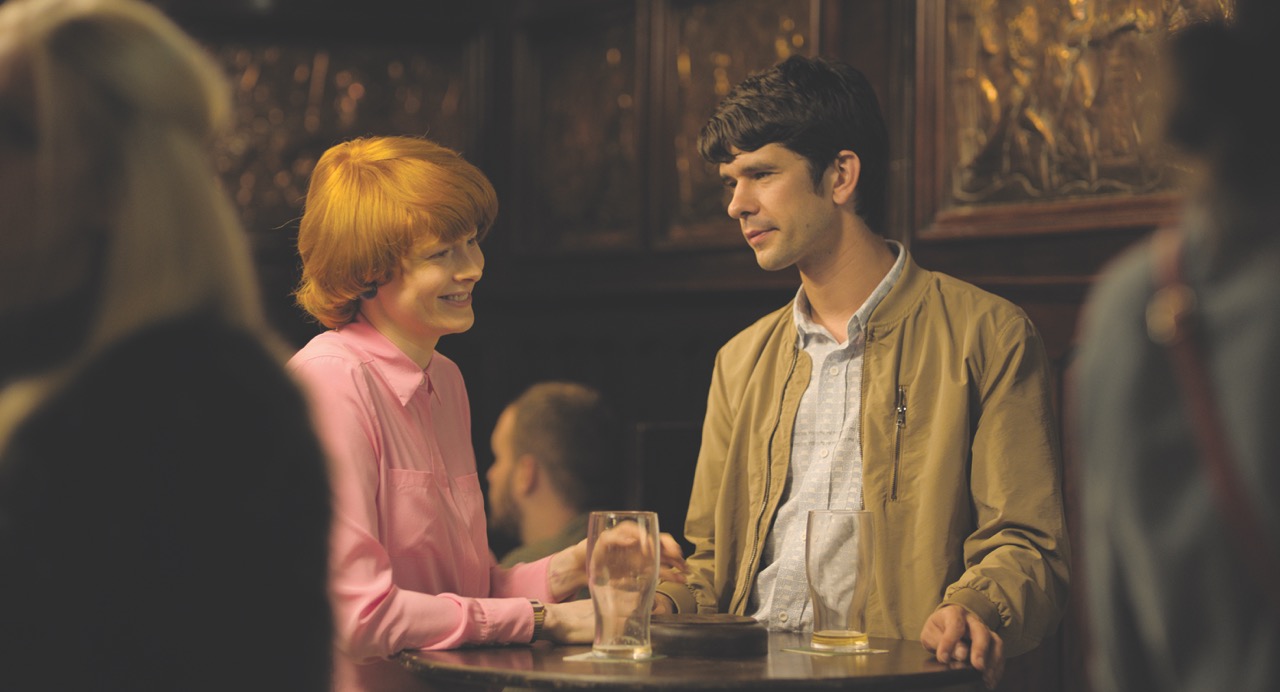 Just as the formal and technical aspects of Little Joe ensure its consistent mystery and surprise, so too does the film’s genre fluidity guarantee that no one theme is overinvested with meaning. Finding the horror in horticulture, Hausner’s movie readily falls into the sci-fi category. But Little Joe is also a deadpan workplace comedy (both my viewings had me LOLing when French coxcomb Ric proudly sniffs that his access code is “fromage”); an oblique maternal melodrama; and a droll anti-rom-com (Chris’s awkward attempts to kiss Alice at a pub constitute a supremely maladroit choreography). Little Joe the plant troubles taxonomies to discomfiting ends; Little Joe the movie does so to invigorating results.