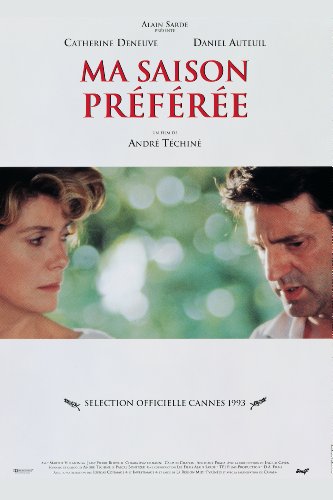 My Favorite Season, directed by André Téchiné, available to rent on Google Play, iTunes, and YouTube

“One is not born, but rather becomes, a woman,” Simone de Beauvoir famously wrote. The same applies to legends and specifically to Catherine Deneuve, née Catherine Dorléac in Paris in 1943. She took Deneuve, her mother’s maiden name, as her nom sometime around 1960, out of deference to her beloved older sister Françoise Dorléac, also an actress. Deneuve has starred in well over one hundred films; since the turn of the millennium, she’s been busier than ever, often performing in several movies each year. After the international success of Jacques Demy’s all-sung, war-darkened The Umbrellas of Cherbourg (1964), in which she played a demure port-town petit bourgeois, Deneuve has arguably been the most famous Frenchwoman in the world. At times she has exceeded mere celebrity and served as an allegorical figure for the whole country: from 1985 to 1989, her visage was used for Marianne, the national symbol of France. She has also been a notable polemical voice at home: in 1971, she added her name to the “Manifesto of the 343 Sluts,” whose signatories admitted to having an abortion, illegal in France until 1975; more infamously, in 2018 she cosponsored a letter denouncing the country’s version of #MeToo for going too far.

Yet during the first, most enduring decade of Deneuve’s superstardom—from the mid-’60s to the mid-’70s—the actress was often debased in the roles she took on; it was as if her blond beauty operated as a blank canvas onto which innumerable depravities could be projected. (“I owe my start in movies entirely to my face and body,” she bluntly told Life magazine in 1966.) In Luis Buñuel’s Belle de Jour (1967), for example, Deneuve’s Séverine, a chic Parisian housewife outfitted in YSL finery, is flogged, raped, and pelted with muck, among other assaults. Wearing a collar and leash in Marco Ferreri’s Liza (1972), the actress plays the “dog” of Marcello Mastroianni, her romantic partner at the time.

Starting in the early 1980s, though, as Deneuve neared her forties, she began a crucial affiliation with the eminent post–New Wave director André Téchiné, with whom she has made eight movies to date, more than with any other filmmaker. This collaboration marks the second phase of her career and signals Deneuve’s onscreen transformation from inscrutable, defiled sex goddess to something much more spellbinding: an actual human being. My Favorite Season (1993)—their third project together, which Téchiné cowrote with Pascal Bonitzer, expressly for Deneuve—gives the actress one of the richest, most equitable relationships she’s ever shared with a male co-lead, Daniel Auteuil, who plays not her spouse, lover, and/or boss but her brother.

My Favorite Season, set in Toulouse and nearby towns, centers on the familial burdens of Deneuve’s Emilie, who, with husband Bruno (Jean-Pierre Bouvier), runs a small law practice. (In her films with Téchiné, Deneuve has enjoyed a wide range of professions: anesthetist, nightclub proprietor, philosophy professor, deejay, casino owner.) Emilie has taken in her mother, Berthe (Marthe Villalonga), after she suffered a stroke at her farmhouse, where she had lived alone as a widow for several years. But Emilie and Bruno’s chic domicile—whose residents also include their twenty-ish kids Lucien (Anthony Prada) and Anne (Chiara Mastroianni, Deneuve’s real-life daughter, here making her screen debut)—comes in for harsh words by the obstinate eldress: “I find it pretentious, with the pool and all.”

Overwhelmed, Emilie seeks out her younger brother, Antoine (Auteuil), a bachelor neurosurgeon prone to captious outbursts. The middle-aged siblings haven’t seen each other in three years—he said something that enraged her—but their reunion, in the cafeteria of Antoine’s hospital, stands as one of the most touching moments in a movie abounding with them: they beam at each other, their delight a pure expression of love and admiration. The harmony is short-lived, of course. Within minutes they’re bickering; the quarreling continues when Emilie invites Antoine to Christmas dinner, a meal that ends in fisticuffs between him and Bruno.

But the dustup lays bare Emilie’s disenchantment with her husband—who largely recedes from My Favorite Season after this fracas—if not her kids (“They don’t see me as a person. They see me as a mother,” she laments to her brother). Now living alone in a hotel, Emilie spends most of her time with Antoine as the two try to figure out the best way to care for Berthe. However well-meaning, their solutions are invariably impermanent and imperfect. Returned to her house in the countryside, the proudly self-reliant Berthe—“Don’t worry about me. My cupboard is full,” she assuages Antoine, a line that assumes nearly unbearable poignance for the quarantined viewer—collapses again.

The siblings place their mother in a retirement home, a wrenching decision that brings Antoine and Emilie closer: they share guilt and soon Antoine’s apartment. Mostly, they share gutting conversations, reminiscing, recriminating, and reconciling. “You have to remember that André likes his actors very dynamic, he likes to use a lot of words, lots of dialogue, and he likes it very pacy. . .,” Deneuve told Bonitzer in a 2004 interview. The siblings’ volubility never grows wearisome; rather, all their loamy talk, no matter how painful the subject, oddly consoles. Perhaps that’s because Auteuil and especially Deneuve punctuate their lengthy lines with just the right amount of hesitancy and doubt. “[Téchiné] always wants to leave the possibility hanging that you’re saying such and such but actually maybe that’s not quite right, maybe the character would have said something else,” Deneuve further explained in that Q&A with Bonitzer. Antoine and Emilie are fluid and flawed, tentatively proceeding when so much seems uncertain: “I’m in the middle of taking the next step,” she tells her brother.

With Auteuil, Deneuve revels in the most intimacy she may have ever had with a male costar (“I can only talk like this with you,” Emilie tells Antoine). In the closing scene of My Favorite Season, Emilie, citing a poem, looks at her brother and calls him “the friend I seek.” For the actress who was once the model for Marianne, the French Republic’s tripartite motto now finally applies.