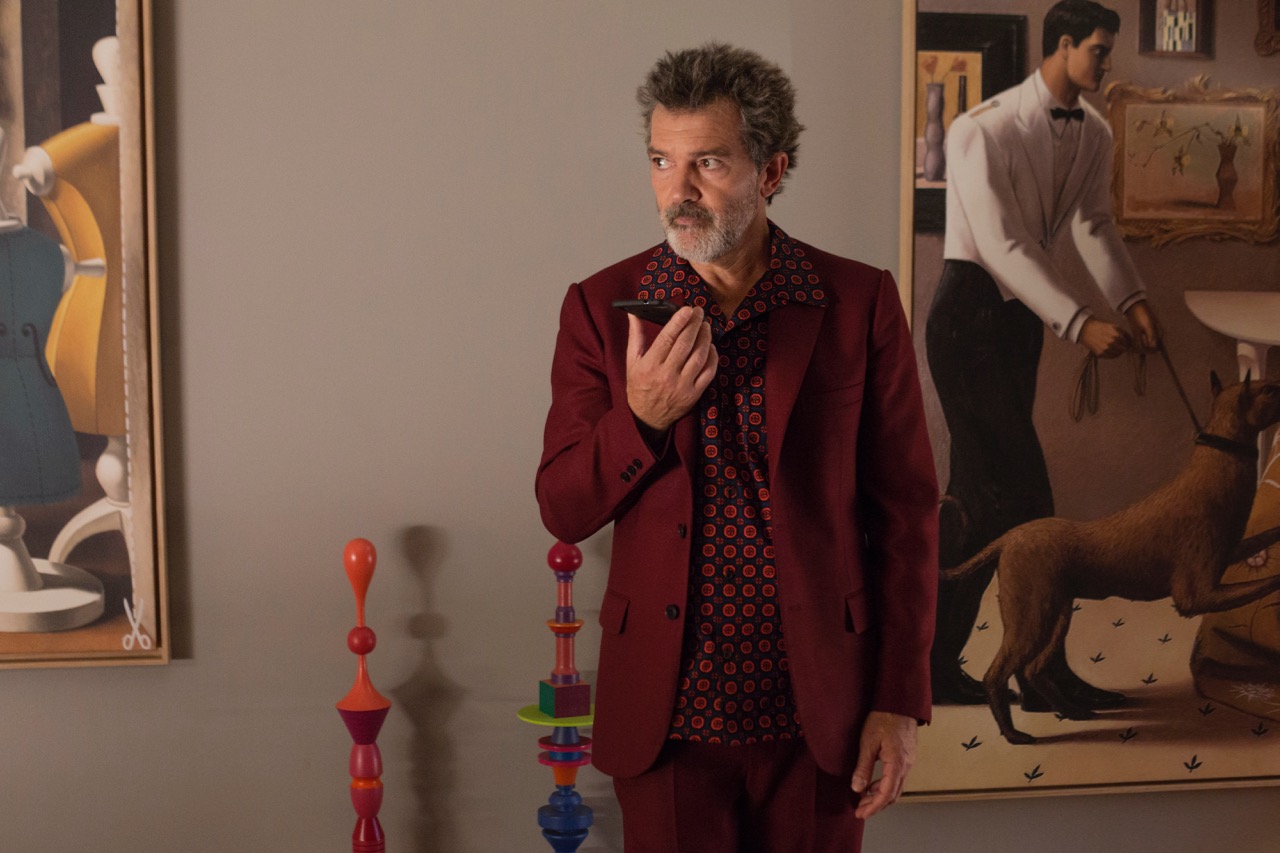 Pedro Almodóvar abhors biopics—a genre that has seemingly proved irresistible to just about every other filmmaker, of any tier—and has thus far refused to make one. In a 2016 New Yorker profile, Almodóvar, the most celebrated Spanish director of the past forty years, wisecracked that he’d added a proviso to his will forbidding anyone from adapting his life into a movie. Despite the Iberian eminence’s antipathy toward filmed biography, though, he is a veteran cine-memoirist, incorporating shards of his experiences into many of his works. At least three of his earlier movies—Law of Desire (1987), Bad Education (2004), and Broken Embraces (2009)—have featured filmmakers as protagonists: surrogates, whether explicit or oblique, for Almodóvar himself. Pain and Glory, his latest, is easily the most self-referential of his twenty-two films to date. It is also one of his best: a mournful yet lusty quasi-autobiopic in which authorship is shared equally by Almodóvar and Antonio Banderas, the actor playing a version of him.

Although Almodóvar has long been thought of as a “woman’s director”—his outrageous comedies and melodramas have provided succulent lead roles for Carmen Maura, Victoria Abril, and Marisa Paredes, among others—Banderas is the filmmaker’s totem male performer. Their association began with Labyrinth of Passion (1982), in which Banderas has a small but memorable part as an incurably romantic gay Islamic extremist with highly developed olfactory receptors. Sexually audacious and highly irreverent, that film—as with every one of Almodóvar’s projects from the ’80s, the early years of the post-Franco period—exemplified a recently liberated national culture and served as a key precursor of New Queer Cinema. 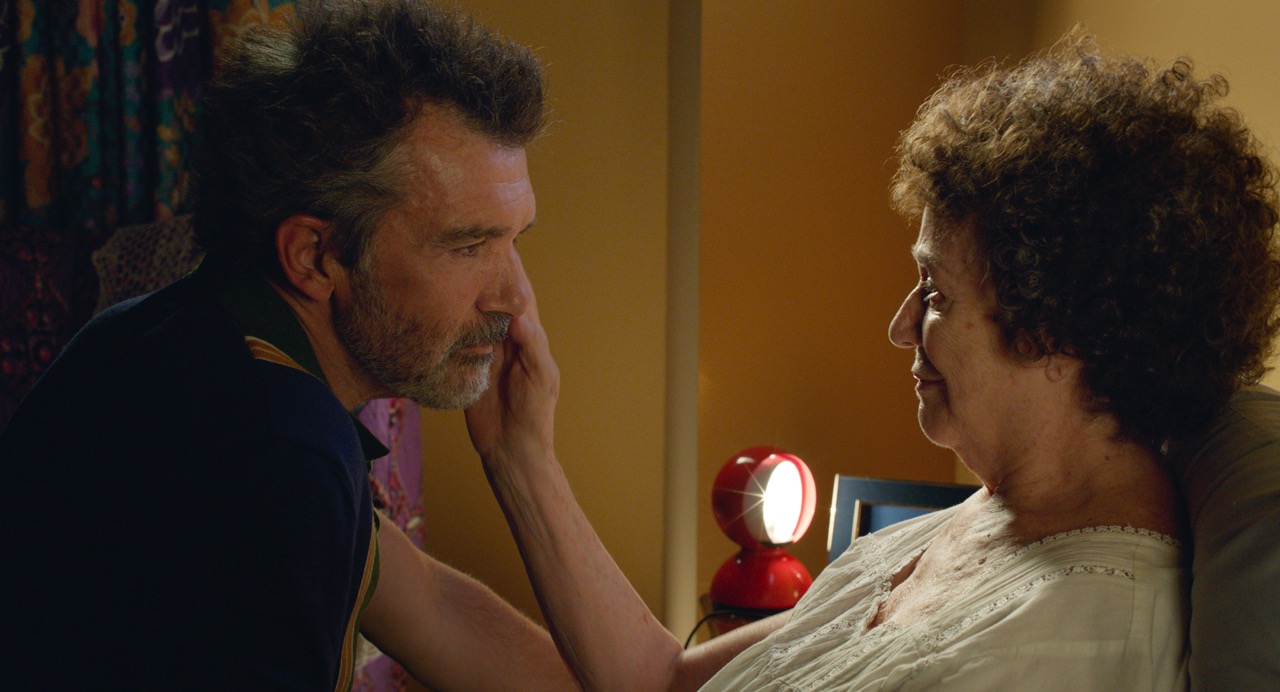 Following Women on the Verge of a Nervous Breakdown (1988), Almodóvar’s international breakthrough, and Tie Me Up! Tie Me Down! (1989), both of which starred Banderas, the actor departed for Hollywood, where his biggest hits have included two Zorro movies and the Shrek franchise (for which he has voiced Puss in Boots). Almodóvar, for his part, has morphed, particularly in the last twenty years, into a mezzo-brow auteur, his films now more notable for their ravishing production design than their anarchic erotic energy. Two earlier movies from this decade found the director trying, and largely failing, to recapture the outré fizziness of his previous work: the unsavory body-horror freak-out The Skin I Live In (2011), which marked the first time since 1989 that Almodóvar and Banderas, playing a mad scientist who specializes in extreme plastic surgery, had worked together, and the wearisome camp romp I’m So Excited! (2013), with the actor in a bit part. 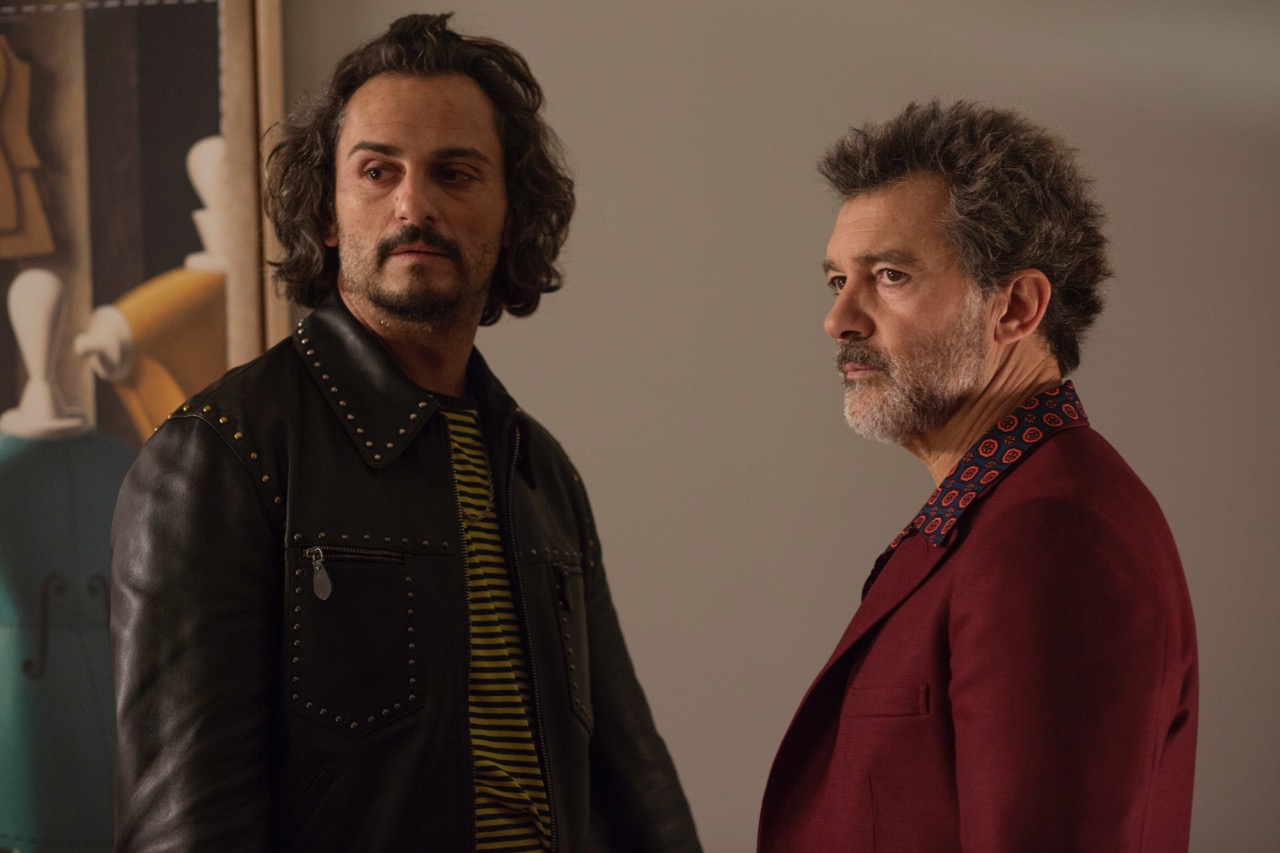 Pain and Glory, perhaps Almodóvar’s most narratively conventional film—as lucid and straightforward as the title, a direct translation of the original Dolor y gloria—ranks as one of his most invigorated. The story is simple: Salvador Mallo (Banderas), a renowned, graying Madrileño director, has fallen into an idle period, his countless physical and psychic ailments—backaches, choking fits, migraines, anxiety, insomnia—making it impossible for him to work. A new restoration of one of his first successes, Sabor (“Taste” or “Flavor”), has impelled him to reconcile with Alberto (Asier Etxeandía), that film’s lead, with whom Salvador, notorious for his demanding shoots, hasn’t spoken since the movie wrapped, thirty-two years ago. To ease the tension of this rapprochement, Salvador tries, for the first time, some of the dissolute actor’s heroin. Salvador’s intermittent smoking of the narcotic, more effective than his prescription pills at assuaging discomfort, sends him into deep dozes flooded with memories of his provincial childhood: flashbacks of nine-year-old Salva (played at this age by Asier Flores), already movie-mad, and enchanted with his mother, Jacinta (Penélope Cruz, another of Almodóvar’s regular collaborators). 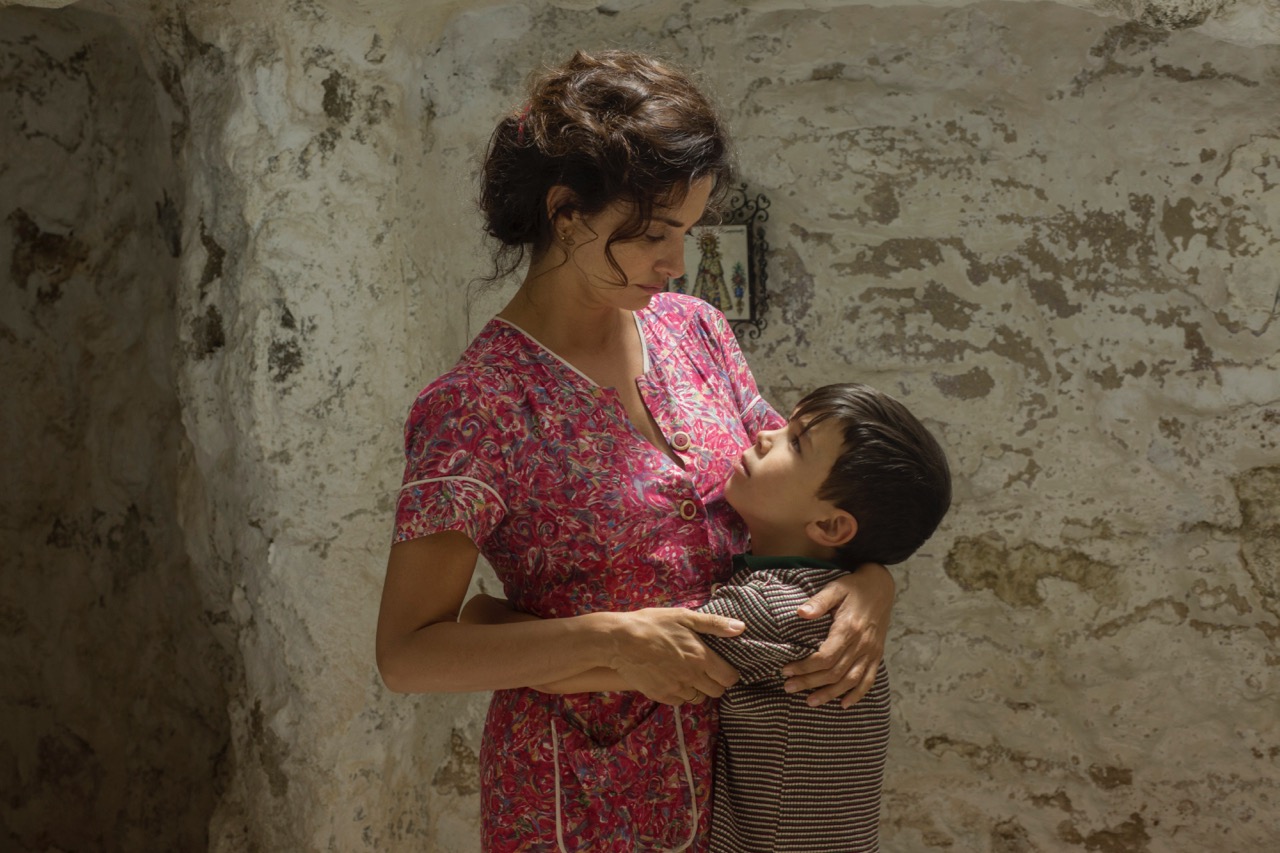 However much Pain and Glory is informed by the life of the man who wrote and directed it, not everything corresponds precisely. Almodóvar grew up in central and western Spain, for instance, not on the eastern coast, like wee Salva; though the director has spoken frankly about his past cocaine use, I have no idea (and do not care) whether he’s into horse. But Banderas, nearly eleven years younger than Almodóvar, who just turned seventy, is styled to unmistakably resemble the filmmaker: Salvador, à la his creator, not only sports a grizzled beard and a thick mane of hair shaped into spiky tufts but also favors boldly colored suits and shirts. The vibrantly hued, book- and art-filled apartment where Salvador lives—or, more accurately, broods—is a replica of Almodóvar’s own. (“You’ve got one hell of a house!” Alberto remarks on his first visit to his onetime tormentor’s pad.)

While Banderas functions as an avatar (an Almodóvatar?) and while he fully, richly inhabits the character Almodóvar has devised, he is not merely a pliable proxy. The profound melancholy that suffuses the film results from two artists contending with their senescence, with their prolific careers and their attendant triumphs and misfires. Like Salvador drifting off into H-fueled reveries of the past, I found myself pleasantly comparing and contrasting Banderas in his earliest movies with Almodóvar—full of frisky, puppyish beauty and anything-goes libidinousness—with the depressive, though dashing, lion in winter here. (To properly honor gay Salvador, I must return to the menagerie metaphors once more to say that the furry, slightly paunchy character falls somewhere between bear and otter.) 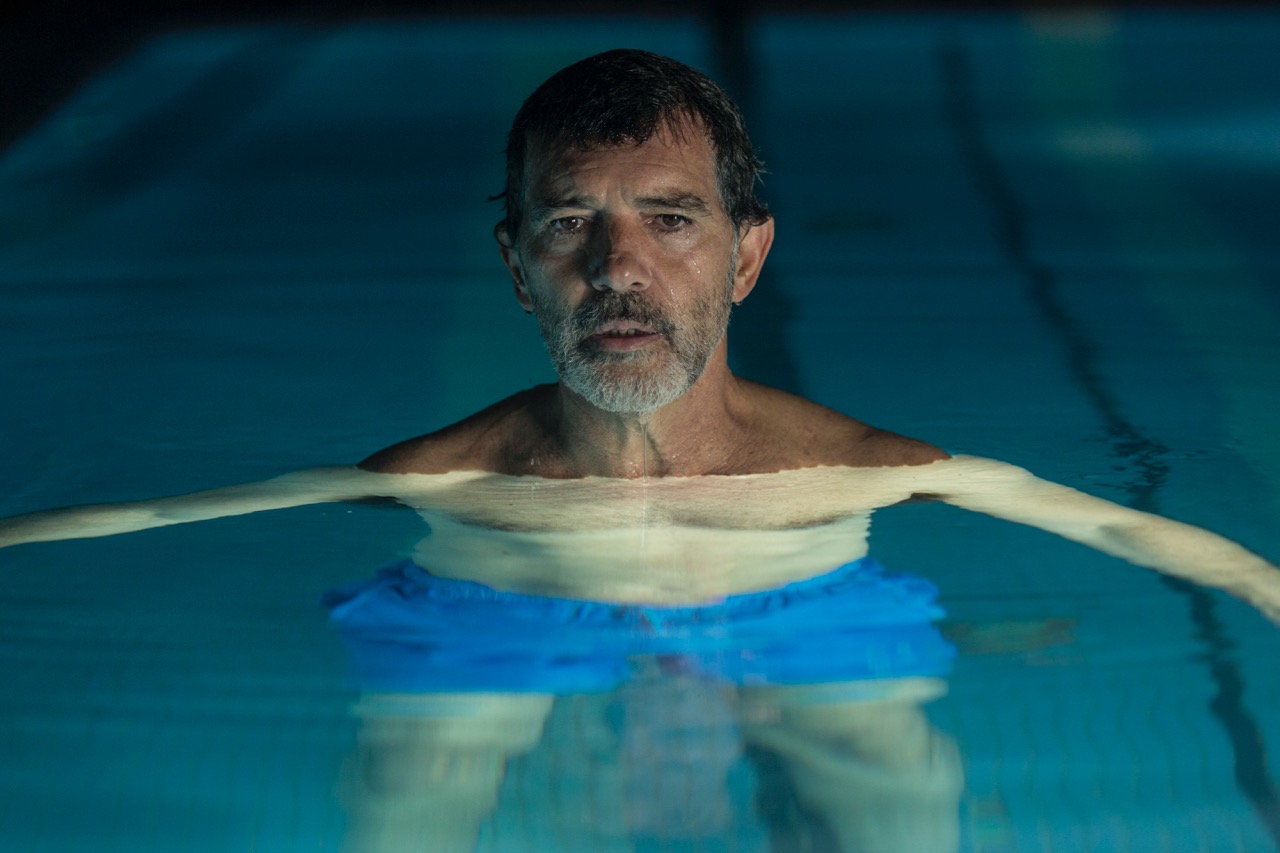 Concerned with the indignities of old age, Pain and Glory nevertheless reminds us of the most rejuvenating elixir: carnal appetite. Late in the film, Salvador recalls a moment in his boyhood, rendered as flashback, when he was overcome with ardor for a young handyman—an episode that helps end his semi-retirement, prompting him to write El primer deseo (“The First Desire”; the name of Almodóvar’s production company, started with his brother in 1985, is El Deseo). That generative remembrance is preceded by a moment of passion in the present tense: a lip-lock between Salvador and an ex-boyfriend, Federico (Leonardo Sbaraglia), whom he hasn’t seen in decades. Their hungry, slow kiss stands as the sexiest scene of Almodóvar’s filmography, an oeuvre typified by a byzantine array of X-rated action. And that expert buss sent me back to one of Banderas’s first Hollywood roles, playing Tom Hanks’s lover in Jonathan Demme’s Philadelphia (1993), the timid AIDS tearjerker that refused the same-sex couple even a quick smooch. Salvador and Federico’s kiss distills the essence of Pain and Glory, a film about moribundity that marvelously reanimates its maker and its star.