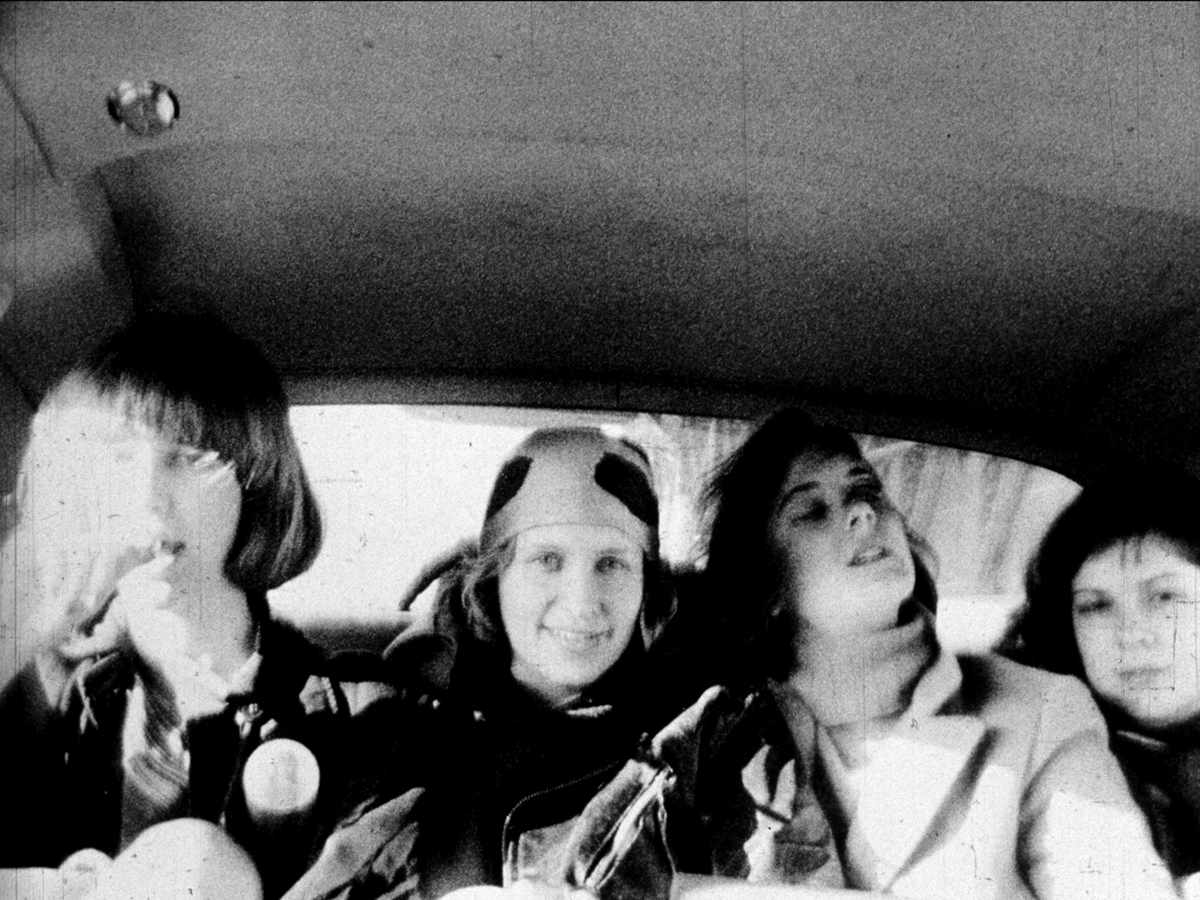 Combative, entropic, mesmerizing, Lizzie Borden’s first film, the shape-shifting documentary Regrouping (1976), is a chronicle of a women’s collective. It is also an essential study of opposition: to the patriarchy, to the filmmaker, to the notion of a harmonious “sisterhood.” The inaugural installment of what critic So Mayer has called Borden’s “New York Feminisms Trilogy”—which includes Born in Flames (1983) and Working Girls (1986)—Regrouping tracks not only the splintering of a cadre but also the breakdown of the filmmaking process itself.

Presented by Anthology Film Archives in a newly restored 16mm print, the movie begins with a title card in which Borden lays out the project’s protean structure. (Regrouping’s weeklong engagement will also be accompanied by screenings on 35mm of Born in Flames and Working Girls, both of which have been fêted with revival runs in the past six years.) The text, which I quote in full, can be read as a statement on the hazards and rewards of collaborating with one’s subjects and perhaps as an admission of guilt:

This film began as an agreement, an attempt at collusion: I would work with their group; they would look over the footage I shot; they could criticize and make suggestions—they would have final say as to what was used in the film. Gradually the terms of the film changed: they began to drift away; more and more, it became my film; I was using them as raw material; they were no longer active participants; I brought in others, I shifted plot, I introduced characters. They are, in effect, pushed out of the film. The film ended, then, as a manipulation, a subjective statement. It was, I suppose, what I had wanted all along.

All those commas and semicolons, that hedging I suppose, hint at some of the greatest sources of tension in the film. Regrouping centers, at least initially, on a cohort of four young, middle-class white women artists—none appear to be older than twenty-five—who say of their coalition, “This is the beginning of sisterhood.” But who exactly is saying this is never made clear: an unidentified offscreen voice, one of many in a voluble chorus of commenters, makes that declaration, typifying the consistent disjunction between sight and sound. “This is the honeymoon period,” someone else says, underscoring the early harmony between the members of the quartet, some of whom ham it up in front of the camera, and Borden, visible in a mirrored wall as she films the four at a diner. 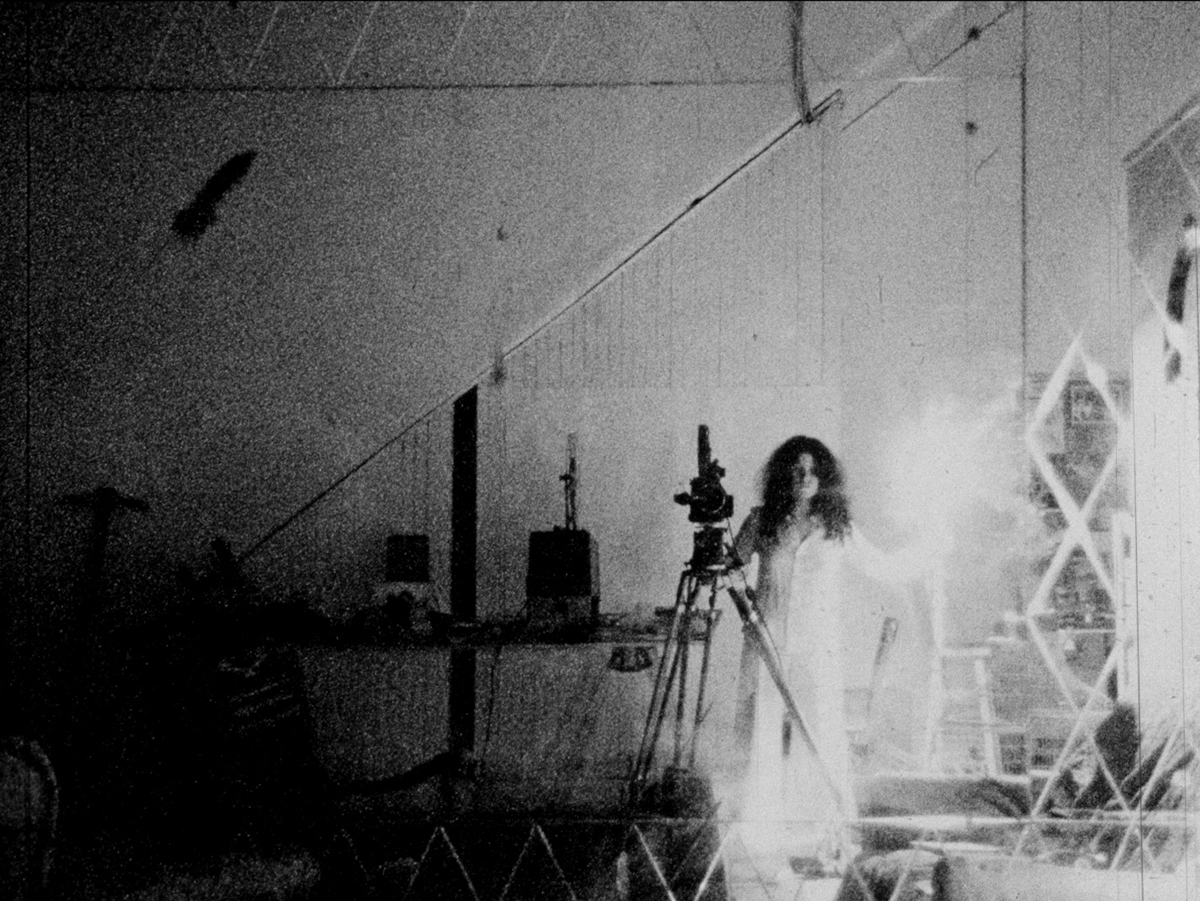 Disintegration soon follows. “She became more covert, even sneaky,” one of the countless narrators avers, seemingly referring to Borden. More naked antipathy toward the filmmaker is evidenced during a car ride through the Holland Tunnel. “Our thinking becomes divided,” a voice intones, setting up another conundrum: to whom does “our” refer—the initial foursome, or another group, this one consisting of five slightly older white women artists, always filmed in the same location and always with sound and image synched? In other segments, Joan Jonas, talking directly to the camera, recounts episodes of discord, but with which coterie is she aligned, if any? (The “cast” in Regrouping abounds with now-canonical artists who were then ascendant—such as Barbara Kruger and Nancy Holt, to name just two. But whether they appear as one of the many bodies onscreen or only as voices off it was impossible for me to tell.)

The mind struggles to make sense of matrices, to link voice to speaker, individual to group, all while sensing that connections will break as soon as they’re formed. Borden wryly lays bare contradictions between theory and praxis, words and actions. Regrouping’s most radical imagery features two women languidly having sex (reportedly friends of the director, who filmed them in her apartment), their ravenous carnality vastly at odds with the offscreen commenter who, dabbling in lesbianism in an effort to bolster her commitment to feminism, notes that she was repelled by her bedmate’s large breasts. Elsewhere in Regrouping, there are piquant reminders of quotidian life, scenes of women of different ages and races grocery shopping or leaving the office. Their everyday activities are far removed from the claustral existence so endlessly dissected by the film’s main crews, who ponder “ideational concepts” and whether theirs is a “feminist art.” 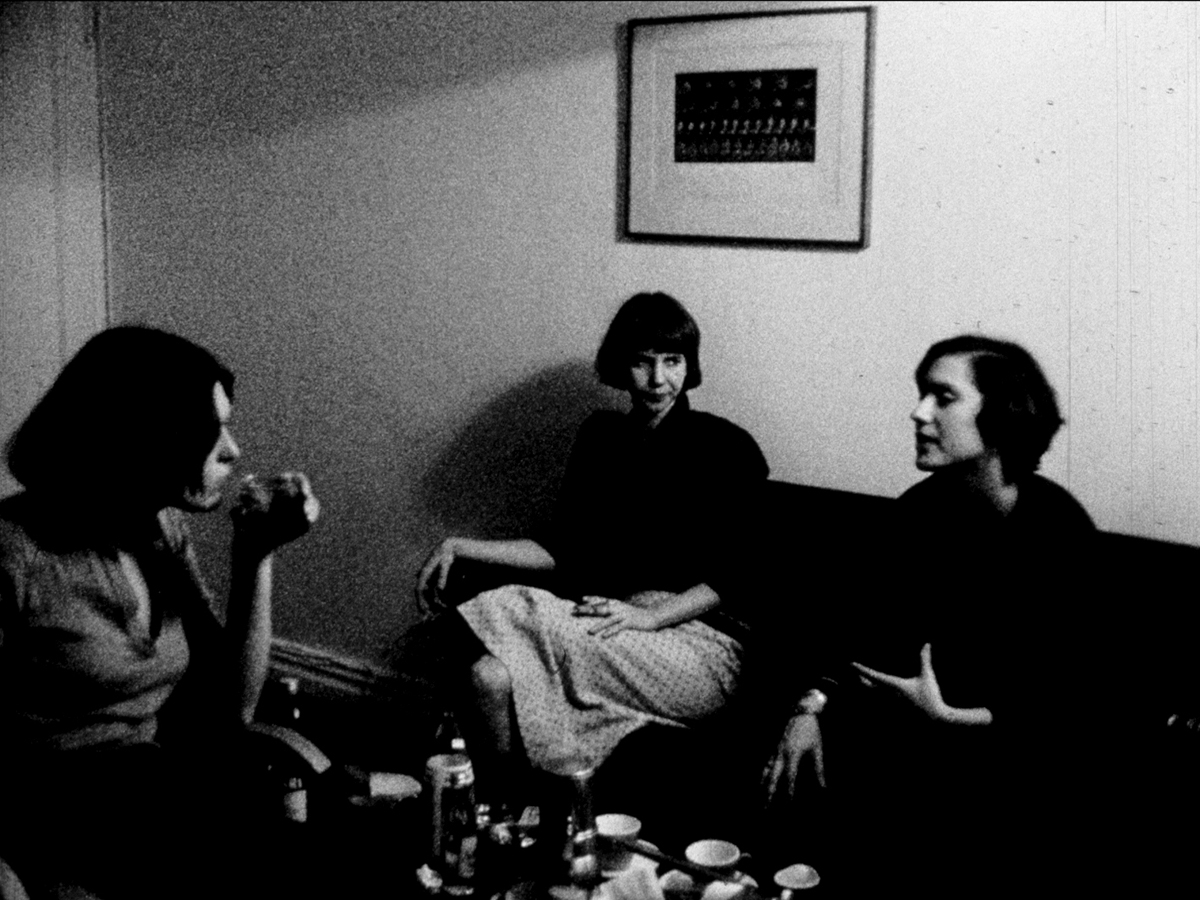 However dense Regrouping’s collage of sight and sound may be, it doesn’t deplete the senses. If anything, it invigorates them. During the press screening, my synapses flaring, I thought of other essential documentaries about feminism made during the same fecund decade as Borden’s: Kate Millett’s Three Lives (1971); D. A. Pennebaker and Chris Hegedus’s Town Bloody Hall (shot in 1971 but not released until 1979); Nicole Brossard, Luce Guilbeault, and Margaret Wescott’s Some American Feminists (1978). Although all three include a mix of dissenting viewpoints from their interlocutors, each can be more or less situated within the straightforward, easy-to-parse approach of cinema verité. With Regrouping, shambolic form and content are mirrored. Chaos reigns.

More than any film I’ve seen about second-wave feminism, whether fact, fiction, or some mixture of both, Regrouping illustrates this infamous, dire assessment from Ti-Grace Atkinson, one of the interviewees in Some American Feminists, on the internecine battles within the movement: “Sisterhood is powerful. It kills. Mostly sisters.” Borden’s film also reveals that the credo “the personal is political”—the rallying cry of the second wave, words now long ossified into truism—can confine as much as it can liberate.

Although the film ends with some semblance of rapprochement—“We see how we have manipulated each other,” a respondent attests—the acrimony depicted in Regrouping continued after the project was completed. The central quartet picketed the movie when it first screened at Anthology in late November 1976 and handed out flyers to the audience. Owing to the fracas, Borden withdrew the film from circulation for forty years. Now Regrouping is reborn, a document of another era whose capacity to unsettle and enthrall remains undimmed.