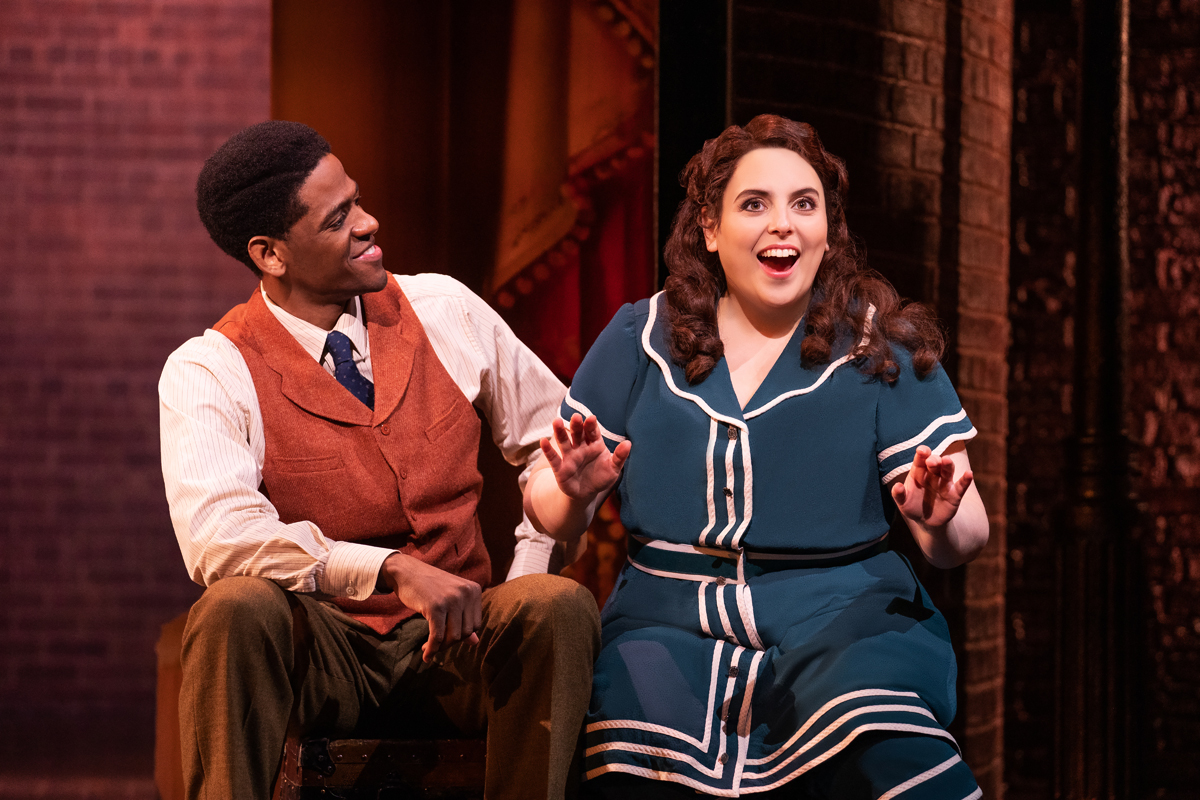 Where would Funny Girl be without its emphasis on striving? Sure, it’s got a few great songs by Jule Styne with enchanting lyrics by Bob Merrill, but it’s the material concerns that prop the show up. Real estate matters hugely to its story, as do modes of transportation, and finances. Its central character, Fanny Brice, loosely based on that famous Jewish American comic performer who became a hit in the ’20s, contrives a way to ascend from Henry Street, in the immigrant neighborhood where she grew up, to a lavish house in the country with its own icebox that comes with a ten-year guarantee. Fanny is restless, either in motion or about to board some train that will bring her ever closer to her dream. She can’t depend on her lover-turned-husband Nick “Nicky” Arnstein to get her there: he’s about as poker-faced as an ATM, but he doesn’t so reliably exude cash.

The Funny Girl up at the August Wilson Theatre isn’t a destination revival. In some respects it settles for being an approachable one, predicated on modest appeal rather than pretensions, hustling, and artistry. The inoffensive and unexciting choices begin with a set that goes for simple elegance, a pair of winding black staircases on either end of the stage and a central brick tower that looks like a grain silo or a prison and is meant to represent downtown Manhattan. It’s gorgeous, though, when the silo opens up—like an inverted Fabergé egg—onto gilded scenes of seduction and marital splendor. The lighting skews dark with hues of purple, which reads as soothing rather than moody. 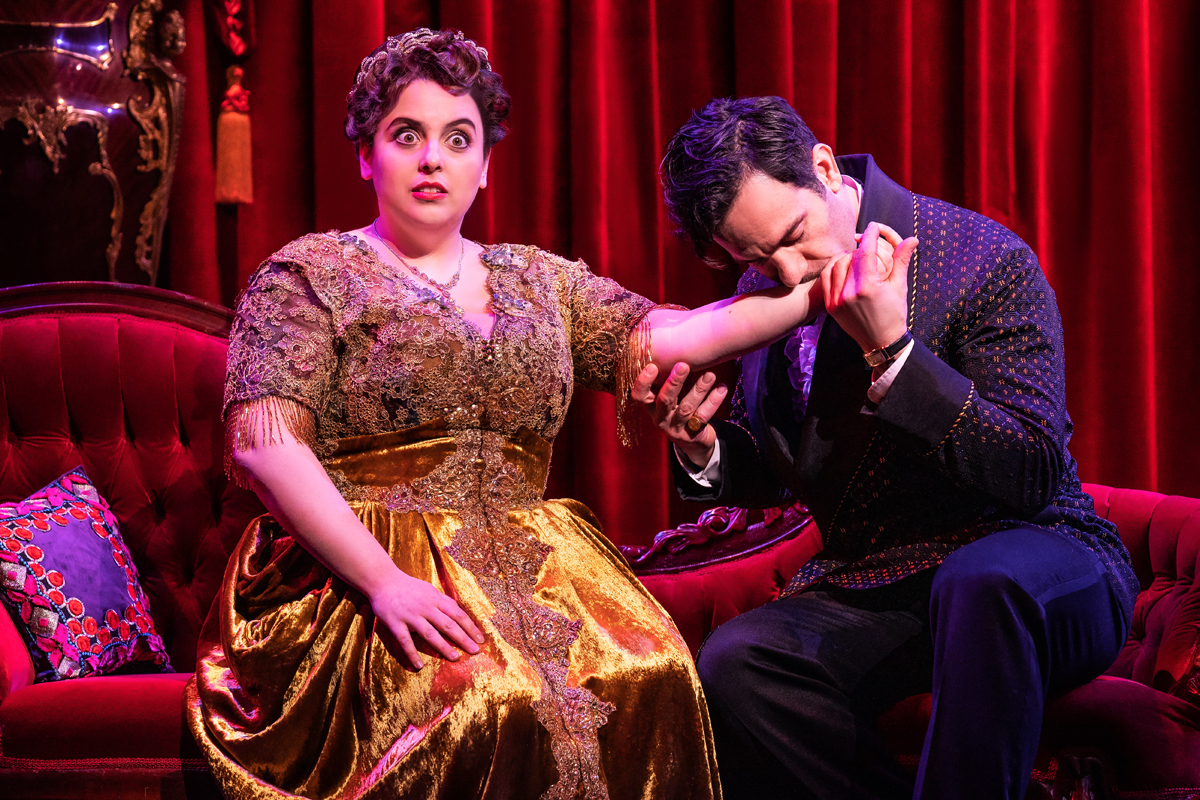 The show begins in 1924, backstage at a New York theater, where Fanny, already a bona fide star, is about to go on. We don’t know it yet, but this is the night that Nick (played extraordinarily blankly by Ramin Karimloo) is finally coming home from jail, where he’s been incarcerated three long years for fraud, leaving both spouses contemplating divorce. The drama then jumps back into the past, and a chronological procession of flashbacks depict the events that led to this moment.

In the early scenes, Beanie Feldstein—who has made a name for herself portraying high-schoolers in Lady Bird (2017) and Booksmart (2019)—plays Fanny as a wide-eyed mamaleh. She sits on the floor and pouts, not allowing herself to believe fully in her potential even when those around her tell her she’s got it. Matching Fanny’s delicate disposition, Feldstein’s voice is reedy and sweet, but it frays quickly against the brassy showstoppers she struggles to sing. It’s an ever-looming deficit in a show that needs an undeniable talent to convince the audience, along with the other characters, of Fanny’s brilliant destiny. Yet even putting the voice aside, Feldstein’s version of Fanny still feels off. Fanny can be acted as naïve, or as vain, but sincerity isn’t the right note to strike in a show about the power of performance, towering infatuations, and showbiz, not to mention embezzlement. 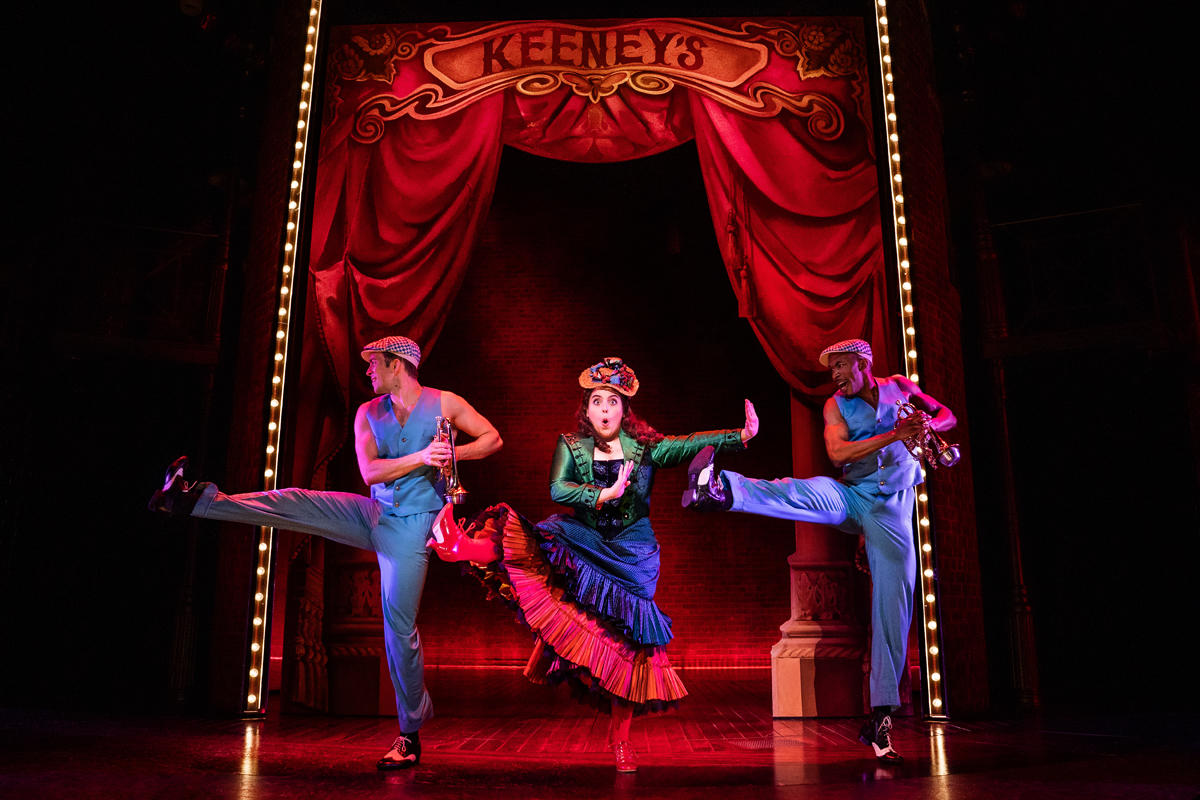 Barbra Streisand, the original Fanny on Broadway and in the film adaptation, forced the first iteration of Funny Girl to be better than it was. It’s not exactly a musical with multidimensional characters or an inspiring message, but Streisand’s immense charisma and nuance in the face of doubting schemers made it into one. Still, the material is far from irredeemable, which is perhaps why the publicity heading into the opening focused nearly as much on actor and playwright Harvey Fierstein’s revisions to the book, at the behest of director Michael Mayer, as on its Hollywood star. But his much-anticipated tweaks failed to salvage the good from the original script. I wasn’t around to see the first Broadway production in ’64, but the film that came out four years later seems considerably less dated than the 2022 production. 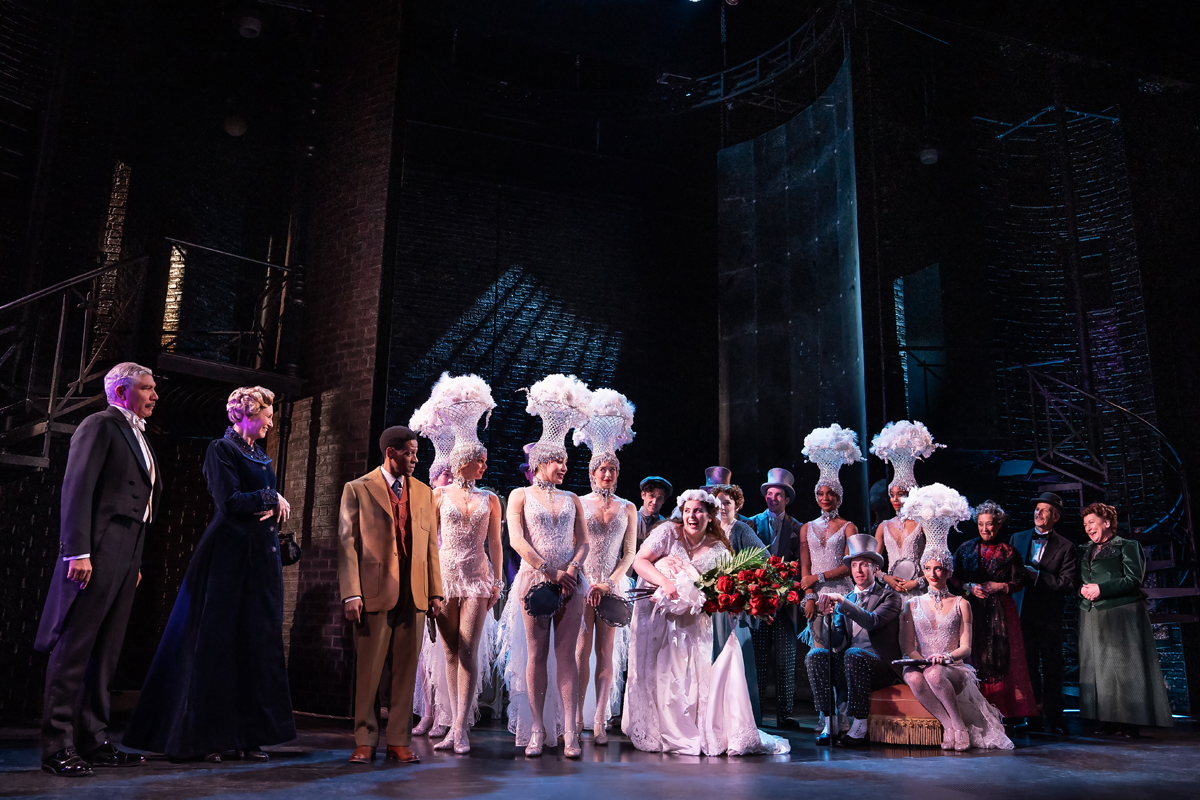 There’s an awful lot of schlock, which hews closer to mediocre sitcom writing than to vaudeville. “I’m the Greatest Star” is still a hilarious number, schticky in all the right ways, but having Fanny’s friend-zoned crush from the neighborhood, Eddie (Jared Grimes), come stumbling onstage wearing her pink two-piece suit is too quaint for laughs. Later, as Eddie watches Nick sweep Fanny off her feet at a soiree celebrating her first performance as a Ziegfeld girl, Fanny’s mother (Jane Lynch) says to him, “Eddie, there are men who should be pursued, and there are men who should be avoided. Guess which ones usually get the girl.” Such family-friendly lines are innocent enough, only they do little to set up the full-blooded passion that is meant to erupt soon after and carry the show’s second act, when the incendiary love affair ends in betrayal. For Fanny and Nick the seduction is mutual: she draws him in with “pizzazz,” he with the lothario routine. The relationship must have positive charge on both ends, be more than a flashy trick, to have real stakes. 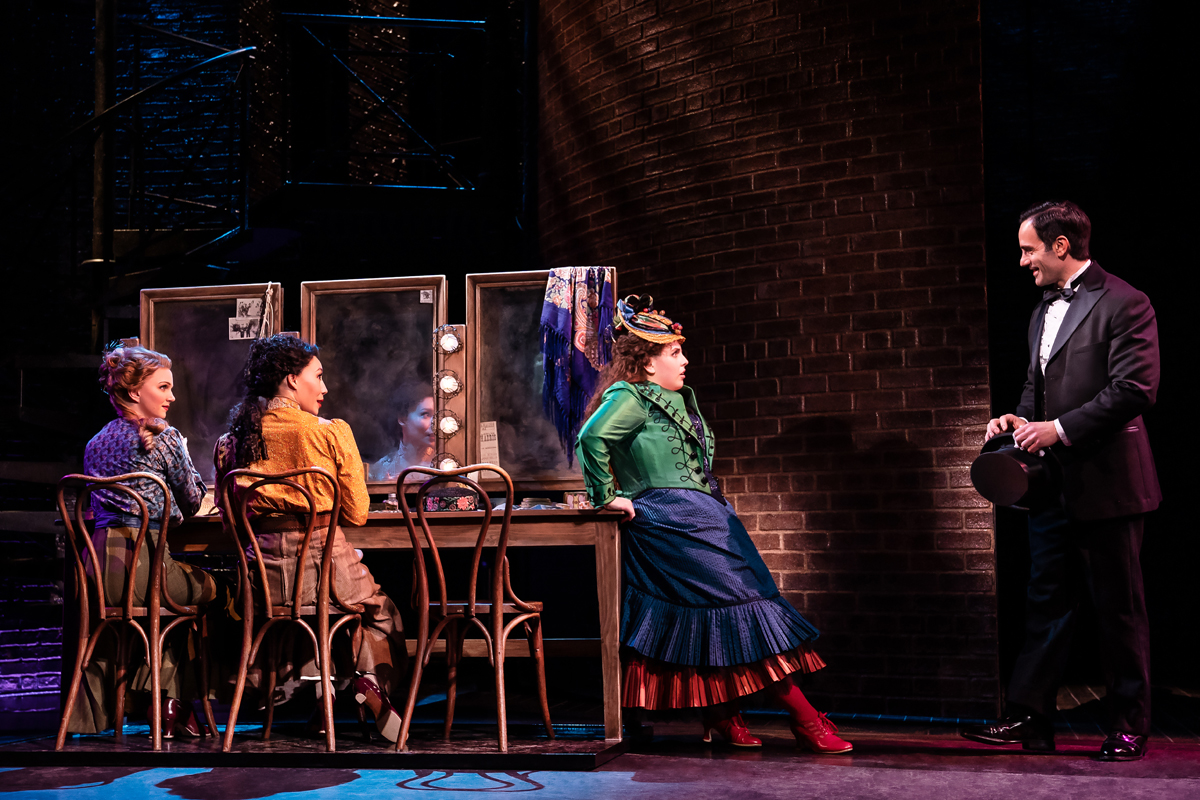 The humor continues to fizzle. For one of her acts Fanny appears in military fatigues plastered with bagels as “Private Schwartz,” flanked by leggy lady paratroopers in metallic miniskirts. The key to Fanny’s success, as she articulates early on, is getting mainstream audiences (prone to antisemitism, preferring goyish types) to laugh with her, not at her—but here the joke leans solely on Jewish stereotype. The characters throw around words like “shvitzing,” “kibbitzing,” and “oy vey,” less like early twentieth-century Lower East Siders than a person from any time in the last hundred years doing a general impression of how they think a Jewish person sounds. 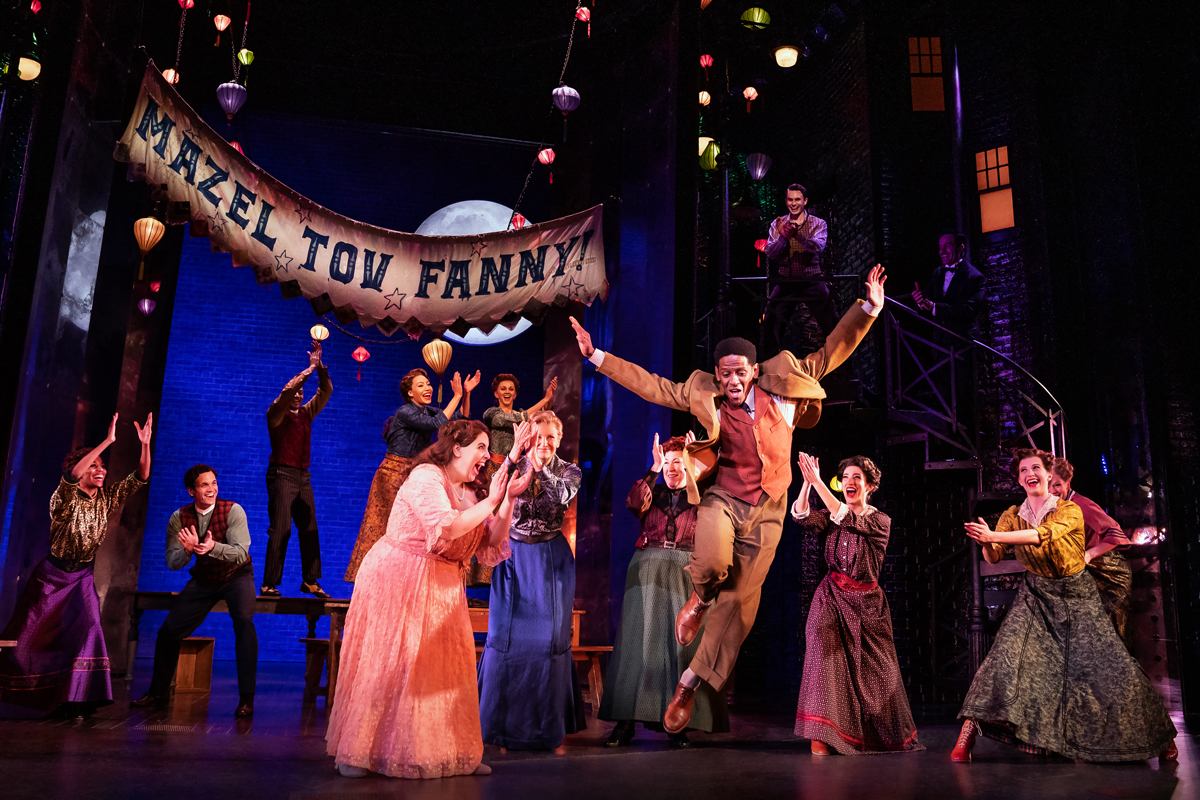 The missed opportunities pile up. As Fanny nears the end of her big triumphant number, “Don’t Rain On My Parade”—in which she justifies and exalts her decision to quit the rest of her tour and tail her beloved to Europe—fellow Ziegfeld girls anticlimactically pick up their luggage on beat and file out of the room. And Fanny sings what ought to be her fulsome ode to love and celebrity, “People,” demurely in the hushed corner of a rowdy neighborhood party thrown in her honor. These are dour choices that might have felt less so had they been lifted by a fascinating voice. As it stands, too many moments quietly build to unassuming silences, themselves not all that loaded. 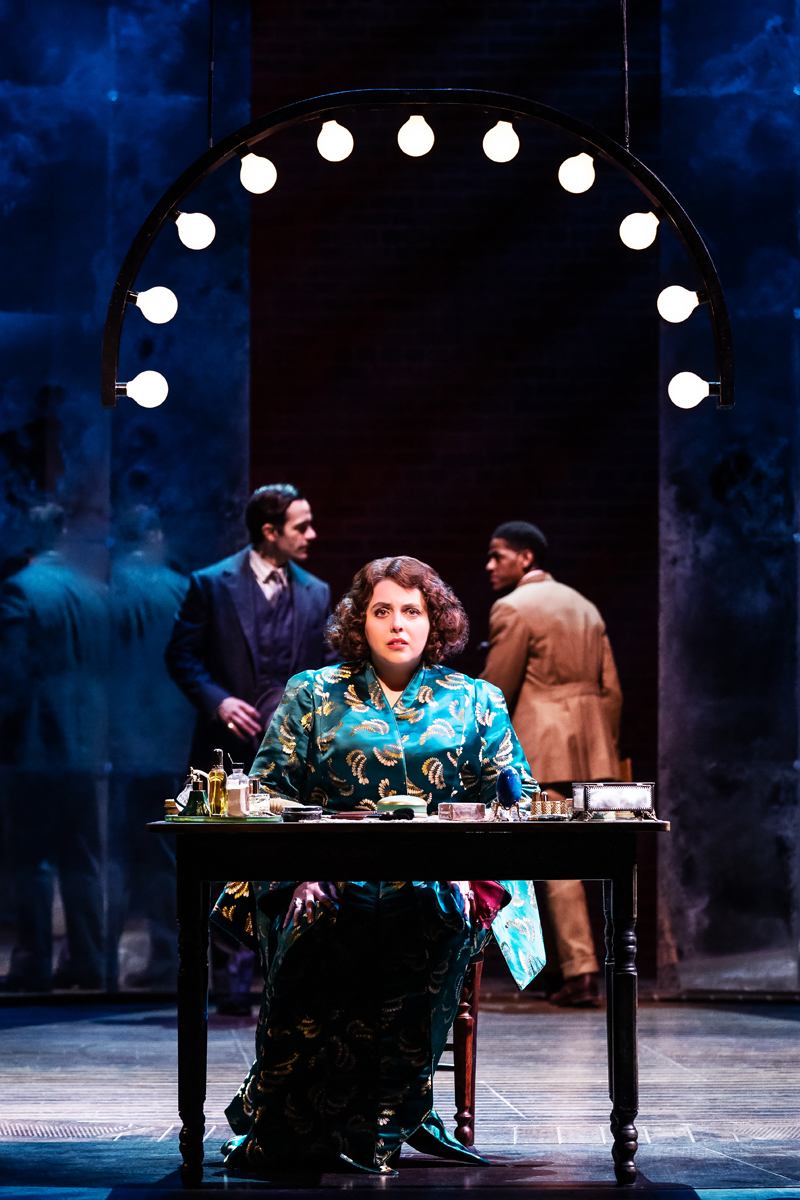 Without motivation, abandon, or joy, the show loses momentum as it progresses, and so does Feldstein’s performance of Fanny. The journey starts with the image of this thirty-something woman in a darkened dressing room staring at the puzzled expression in her mirror, not sure she likes what she sees. The same image introduces the final scene, a mawkish repetition underscoring the original material’s shallow handling of its famous subject. That the audience on the other side of Fanny’s vanity is also no more sure of who she is by the end is a failure of this particular production. We’re still waiting for Ms. Brice to arrive.

Hannah Gold is a freelance critic and fiction writer based in New York City. Previously, she’s worked at Jezebel, the Cut, and Mask Magazine.