In François Ozon’s latest film, no return to glory. 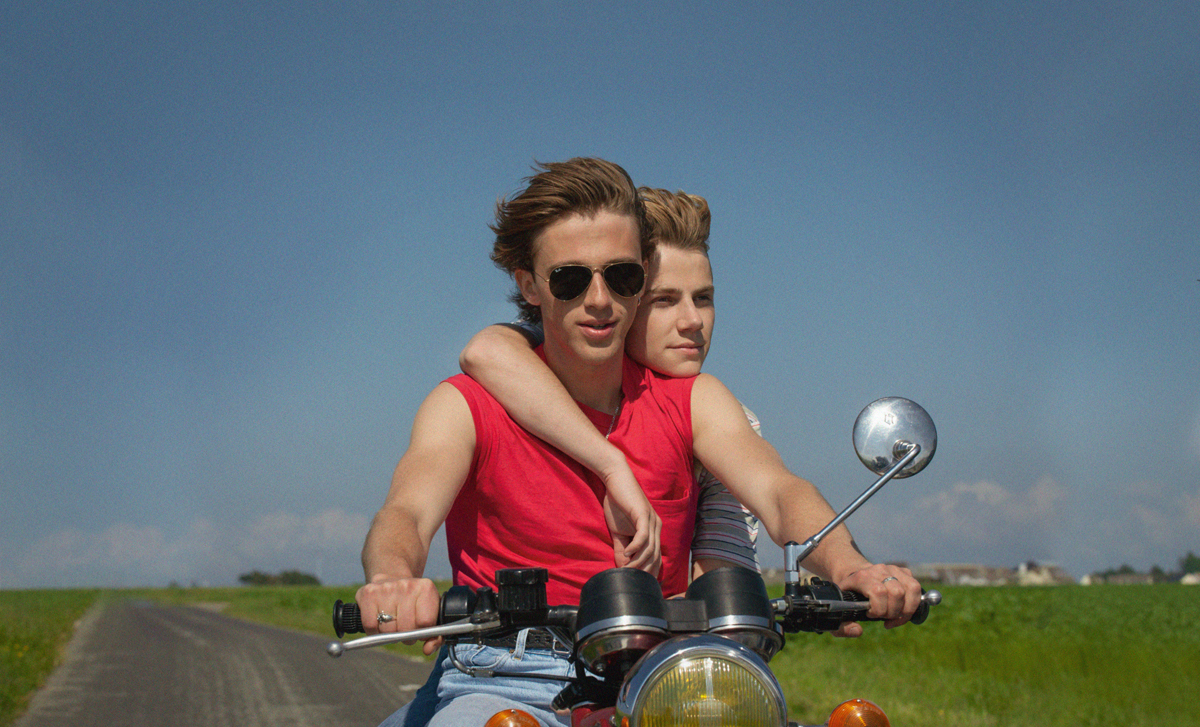 Benjamin Voisin as David and Félix Lefebvre as Alexis in Summer of 85. Courtesy Music Box Films.

Summer of 85, written and directed by François Ozon, now playing in theaters in New York, Los Angeles, and San Francisco

François Ozon is one of France’s most prolific filmmakers of the past twenty-five years. He is also one of the most inconsistent—of any nationality. His early works, like See the Sea (1997) and Criminal Lovers (1999), audacious studies of psychosexual extremes, endure as exemplars from the last gasp of the New Queer Cinema movement. During that time he also played a crucial role in reviving the career of Charlotte Rampling, the erstwhile reigning sylph of ’70s Euro cinema who starred in Under the Sand (2000), his superb examination of grief and mourning. Since then, though, his output has included, to name just a few of his projects, a screechy grande-dame smackdown (2002’s 8 Women), an inert melodrama about a pregnant heroin addict trying to kick her habit (2009’s Hideaway), a disastrous gloss on female sexuality (2013’s Young & Beautiful), and a decorous, dull post–World War I period piece (2016’s Frantz).

But among those misfires stands 5×2 (2004), a tender examination, told in reverse chronological order, of the dissolution of a marriage, and Ricky (2009), an oddly moving, magical-realist fable about a flying baby. Although the latter may have been the last Ozon movie that I wholly admired, I held out hope that Summer of 85, his latest, would be a return to form, since it concerns themes that the director explored so sharply at the beginning of his career: estival idylls and anarchic adolescent desire. My optimism was sadly misplaced.

Summer of 85 is an adaptation of the 1982 British YA novel Dance on My Grave by Aidan Chambers, among the earliest books to matter-of-factly present a romance between two teenage boys. The long openly gay filmmaker adored the book, which he first read in 1985—hence the movie’s title—when he was seventeen. (I have never read, in fact had never heard of, Chambers’s novel.) As a budding auteur in his early twenties, Ozon, then making shorts, had thought that a screen treatment of Dance on My Grave would be his first feature, an idea quickly abandoned. He was certain that someone else would adapt the text, a notion that also never came to pass.

Rereading the book a few years ago, Ozon was surprised to notice that several of the novel’s motifs and climactic scenes had surfaced in his own work. “This book had been fueling my imagination, yet I’d never made the connection,” as he explains in the press notes. When those tableaux emerge in Summer of 85—such as a teenage boy masquerading in female attire, which summons Ozon’s savvy short A Summer Dress (1996), or a scene at a morgue that instantly evokes Under the Sand—their appearance dispiritingly reminds us just how far removed the filmmaker remains from his initial glory.

One gimmick I can’t recall Ozon deploying before—the protagonist’s direct address to the camera—unpromisingly opens the film. Handcuffed and being marched down a grotty corridor by a gendarme, sixteen-year-old Alexis (Félix Lefebvre) intimates, via a solemn voice-over that signals the histrionics to follow, what led to his grim predicament: “If Death doesn’t interest you, if you don’t want to hear about a corpse I knew when it was alive, if you don’t want to know what happened to him and me, and how he became a corpse, you’d better stop right here. This is no story for you.” That last line is delivered as the teen stares right into the lens, a flourish that might have had more punch if Lefebvre—who, most charitably, suggests a pallid River Phoenix deepfake scrubbed of all charisma—were capable of giving off just a whiff of adolescent menace and rage. 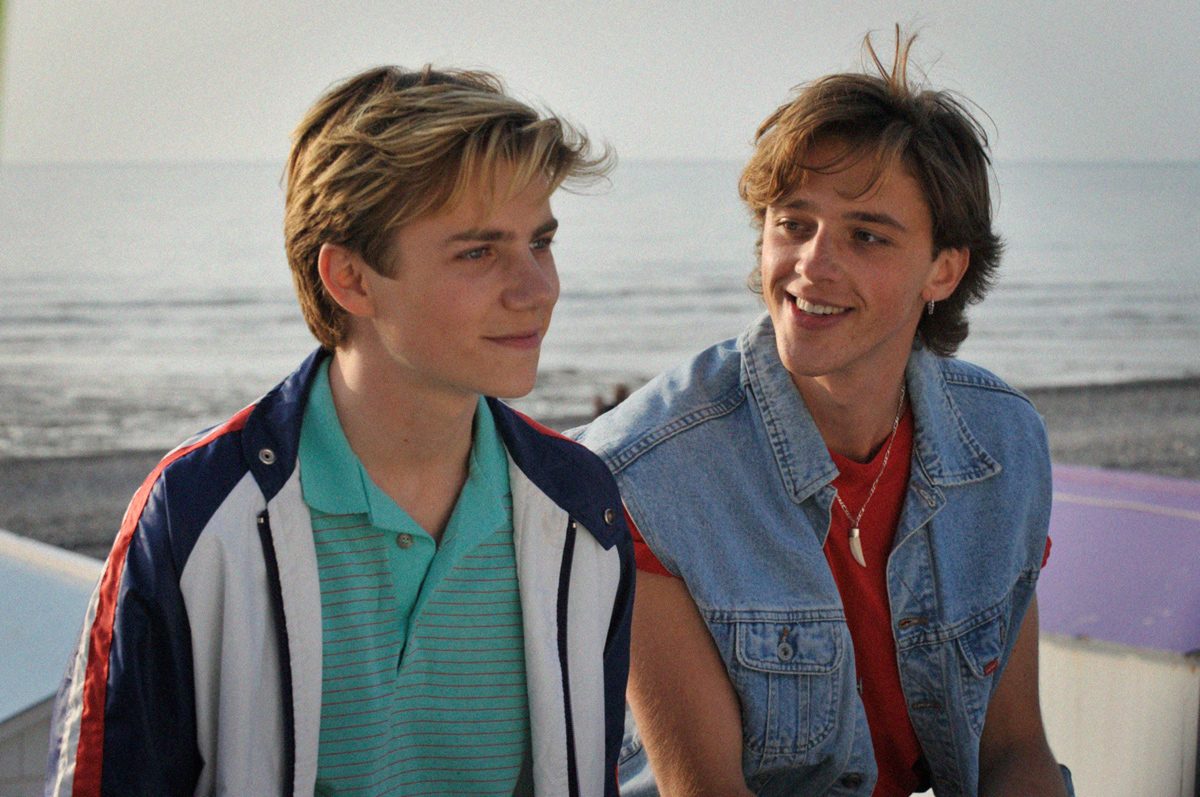 Félix Lefebvre as Alexis and Benjamin Voisin as David in Summer of 85. Courtesy Music Box Films.

Summer of 85 then rewinds to a few months prior, when Alexis first meets David (Benjamin Voisin)—“the future corpse,” per Alexis’s invariably irritating narration—in Le Tréport, a seaside town in Normandy that is home to both lads. Their dramatic introduction augurs outsize passions: David, a skilled sailor, rescues Alexis after his boat capsizes. Exuding vulpine magnetism, David, two years Alexis’s senior, quickly seduces his new friend, their intimacy fully endorsed by the older guy’s boundary-bashing widowed mother, played by Valeria Bruni Tedeschi. (As one of the embattled spouses in 5×2, the actress intelligently shaded in a complex role, in which her character both chases after her desires and weathers crushing disappointments; in Ozon’s latest, she flails about in the hopeless part of gorgon-mommy.) 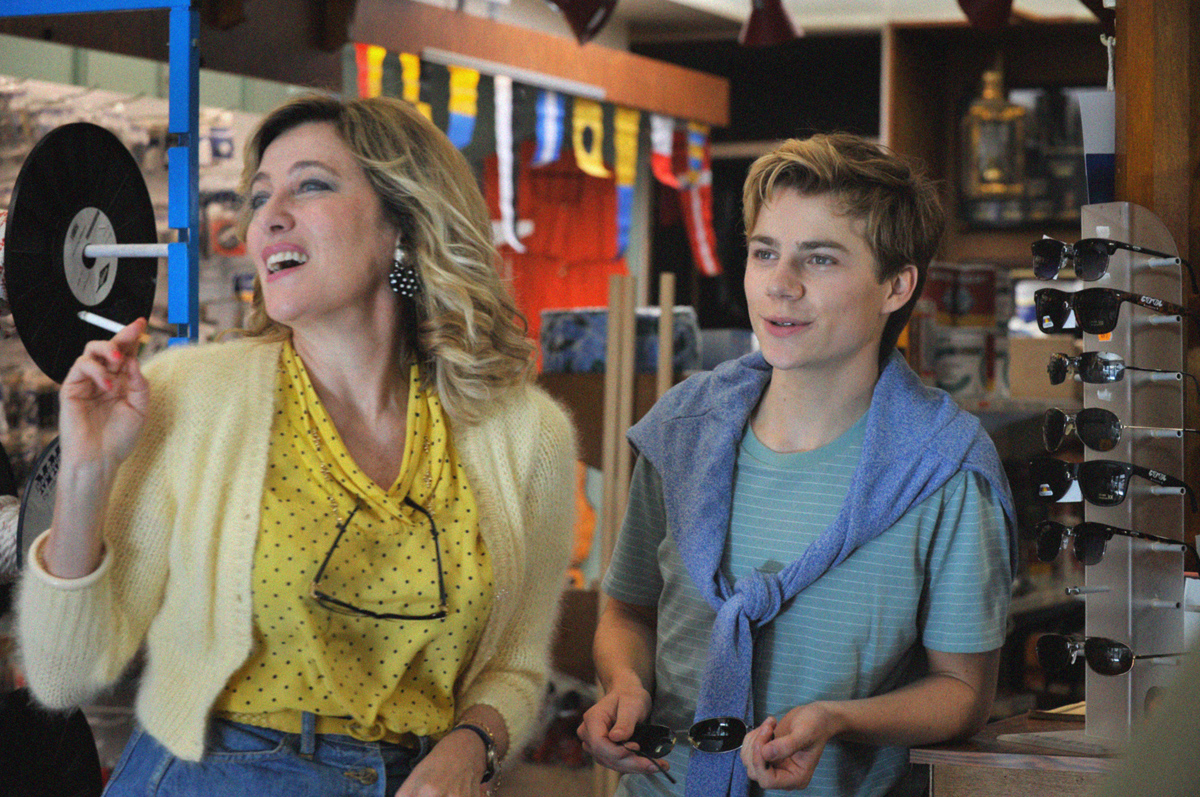 Whenever Voisin is on-screen, the hectic but torpid Summer of 85 stirs to life. The actor recalls two vastly different ’80s icons: Andrew Ridgeley, the less famous member of Wham!, whose shaggy mane and swept bangs the young Frenchman replicates almost exactly; and David Wojnarowicz, whose long face, lean body, and sexy arrogance Voisin shares. His resemblance, both physical and psychic, to idols from the period depicted provide a sense of vitality otherwise lacking. 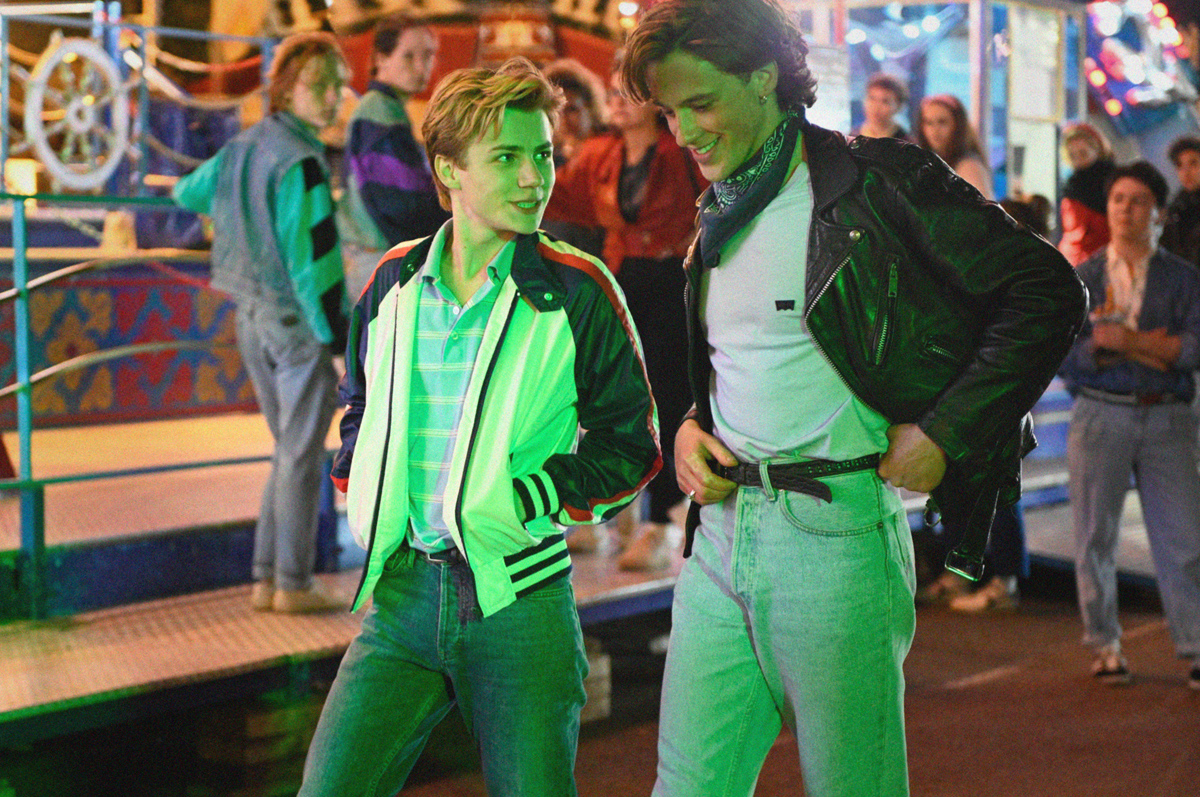 Félix Lefebvre as Alexis and Benjamin Voisin as David in Summer of 85. Courtesy Music Box Films.

But, since the film makes clear within its first few minutes that David is fated to be a cadaver, Voisin must depart too soon—creating a void to be filled with, among other depleting segments, a terrible dance to a corny Rod Stewart song and wheel-spinning segments between Alexis and his literature teacher (Melvil Poupaud, the protagonist in Ozon’s 2005 Time to Leave, a movie about a dying fashion photographer that leavened its treacle with terrific scenes between the ailing man and his grandmother, played by Jeanne Moreau). 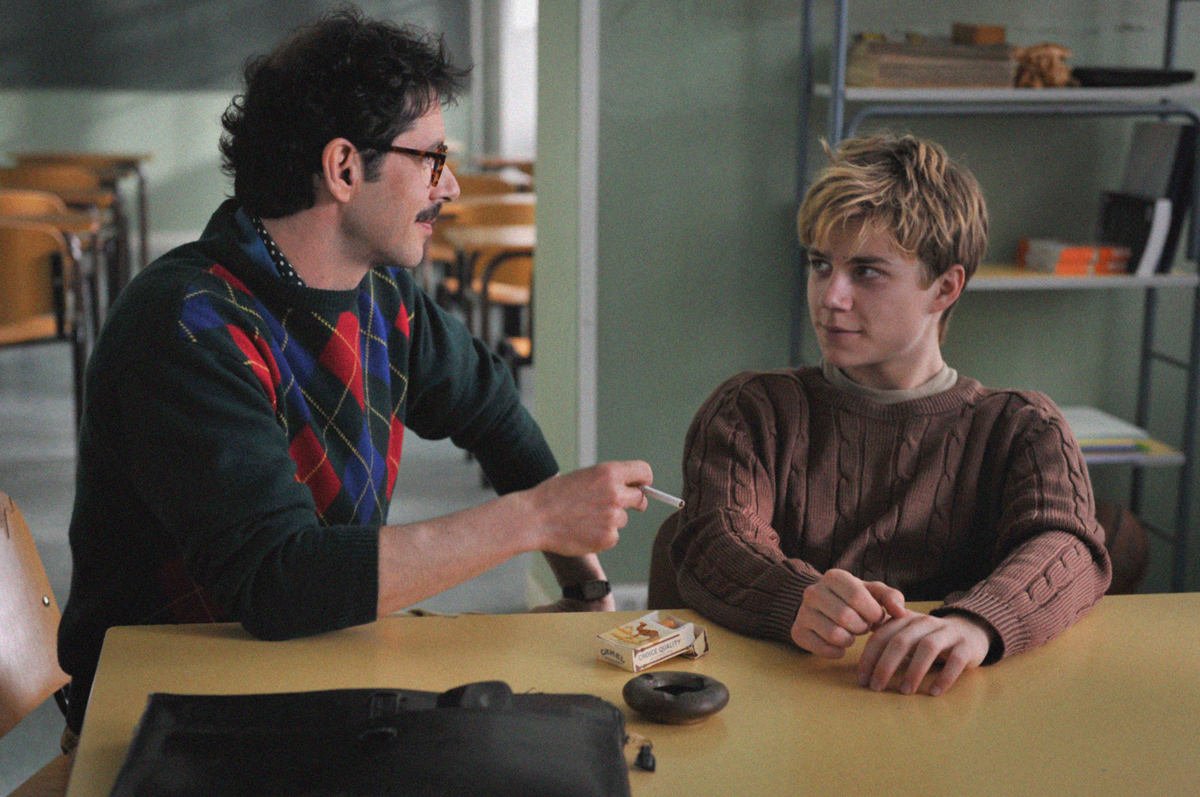 Summer of 85 had been slated to play last May in competition at the Cannes Film Festival, an event that, like everything else in 2020, was canceled. But a global pandemic seems not to have affected Ozon’s productivity a bit; he’s finished one movie, selected to premiere at Cannes next month, and has begun work on another, a reimagining of Rainer Werner Fassbinder’s mordant sapphic chamber drama The Bitter Tears of Petra von Kant (1972). The Gallic filmmaker has adapted the German godhead before, having transformed a never-produced play written by a nineteen-year-old RWF into Water Drops on Burning Rocks (2000), a zesty, omnisexual romp. Like Ozon, Fassbinder was queer and wildly prodigious, making more than forty films over a fifteen-year span (a work schedule that, fueled by drugs and alcohol, essentially killed him at age thirty-seven in 1982). Unlike Ozon, RWF continually produced great movies.