Rejecting his country, an Israeli tries to reinvent himself in Paris. 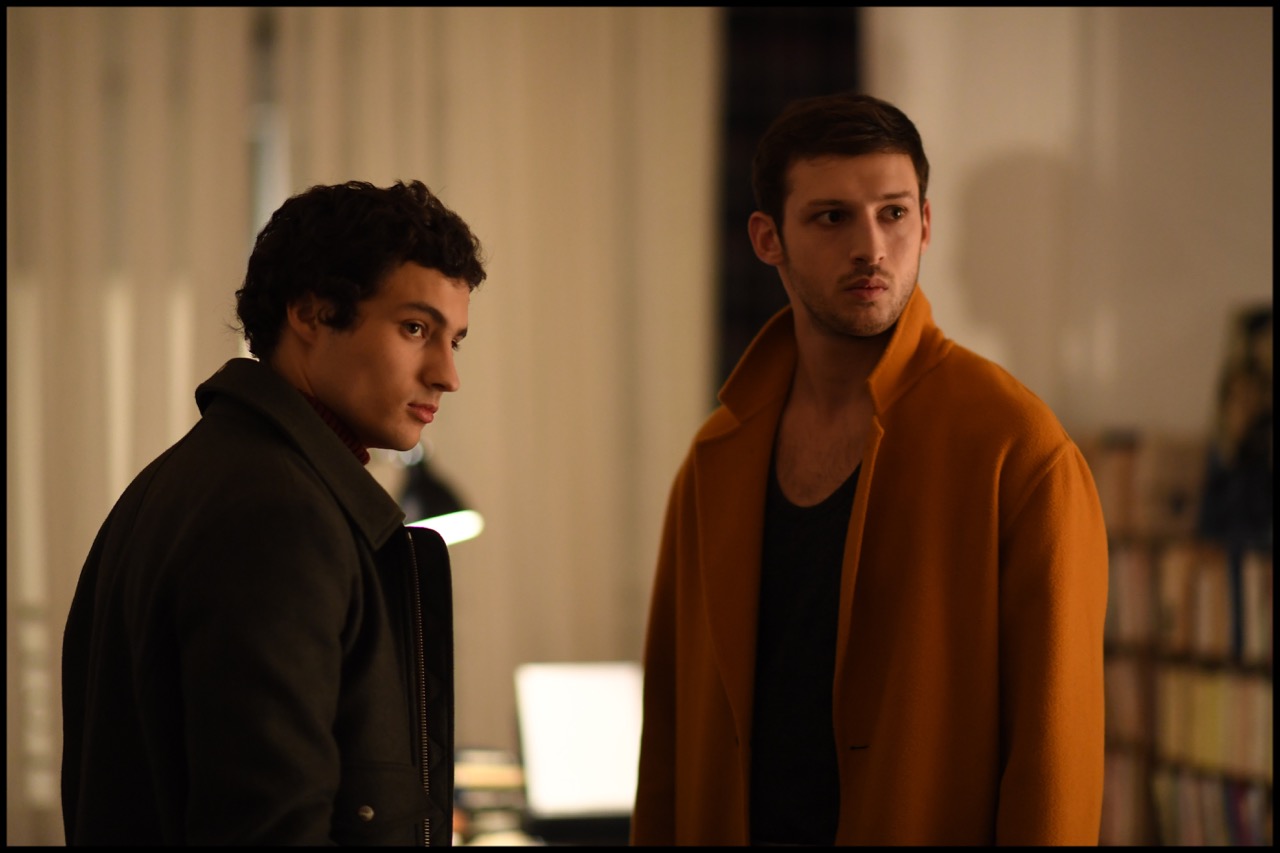 Maxims by William S. Burroughs and Ludwig Wittgenstein pleasingly settle in the mind while watching Synonyms, the kinetic third narrative feature by Israeli filmmaker Nadav Lapid and his first to be set outside his homeland. “Language is a virus from outer space,” quipped the experimental writer. “If we spoke a different language, we would perceive a somewhat different world,” remarked the philosopher. Both adages function as animating ideas in Lapid’s nimble, volatile movie, which probes linguistic—and, by extension, national—allegiances and renunciations.

Synonyms, which Lapid cowrote with his father, Haim, is rooted in an episode from the director’s own life. Sometime in the early 2000s—years that coincide with the Second Intifada—Lapid, then in his twenties, felt an overwhelming urge to leave his country and save himself “from an Israeli destiny,” as he explained in an interview. With a rudimentary knowledge of French, he flew to Paris, where he knew no one and lived penuriously. He cut off all ties with Israelis and refused to speak Hebrew, committing himself to zealously studying a French dictionary. 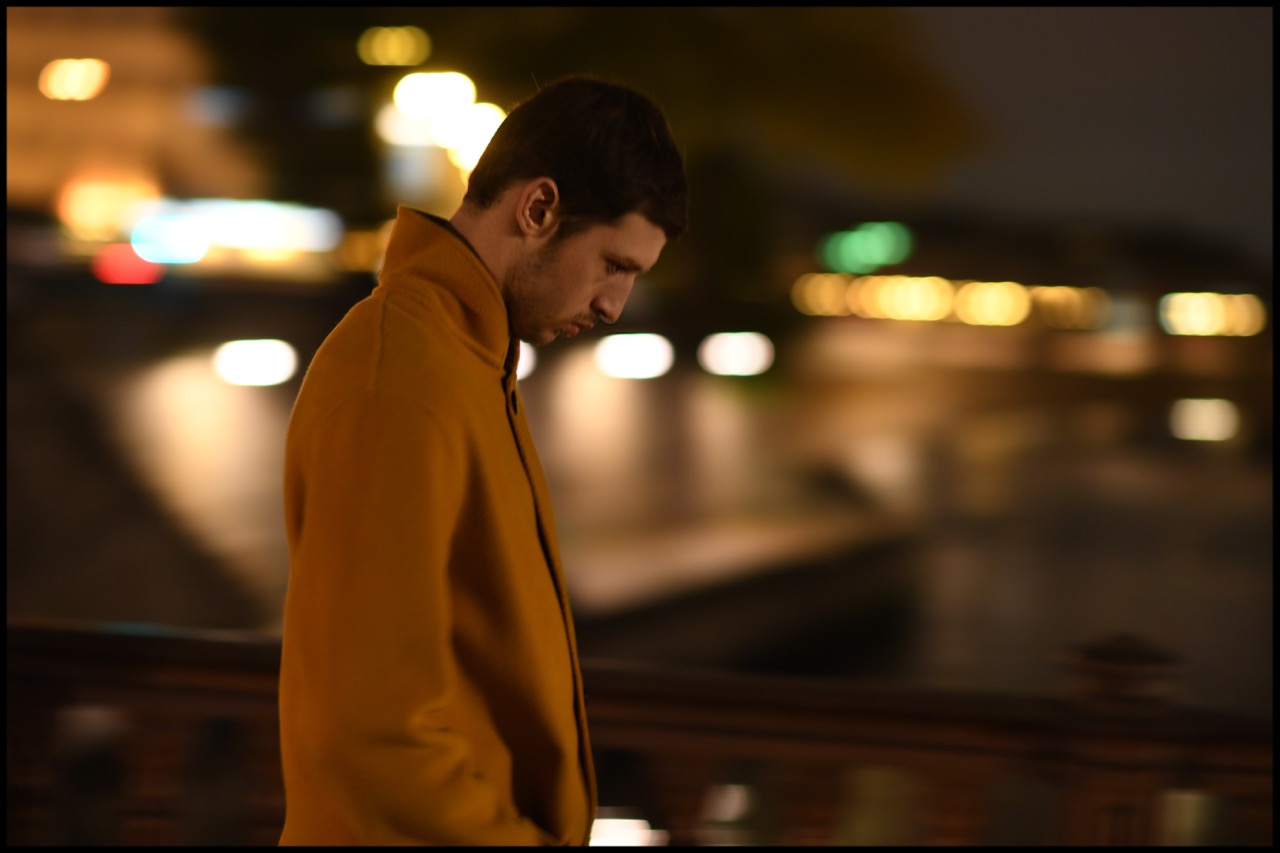 That more or less describes the actions undertaken by Yoav (Tom Mercier), the unstable yet often alluring protagonist of Synonyms, set in the present day. Tracked by a careening handheld camera, he’s first seen striding through the Left Bank; his audible breathing suggests exertion, anxiety, or both. After showering in his temporary lodgings, a spacious but unheated and unfurnished apartment, he discovers that his few possessions have been stolen. Yoav’s upstairs neighbors—a young toff named Émile (Quentin Dolmaire), currently at work on a book with the unpromising title Nights of Inertia, and his oboist girlfriend, Caroline (Louise Chevillotte)—come to the new arrival’s aid, plying him with a stack of euros and Émile’s chic castoffs. (Of those garments, Yoav is fondest of a goldenrod overcoat, which he sports everywhere. The yellow color is eerily similar to that of the badges that the Nazis forced Jews to wear; the hue of the manteau may be Lapid’s oblique way of acknowledging the ineradicable scourge of anti-Semitism in Europe.) 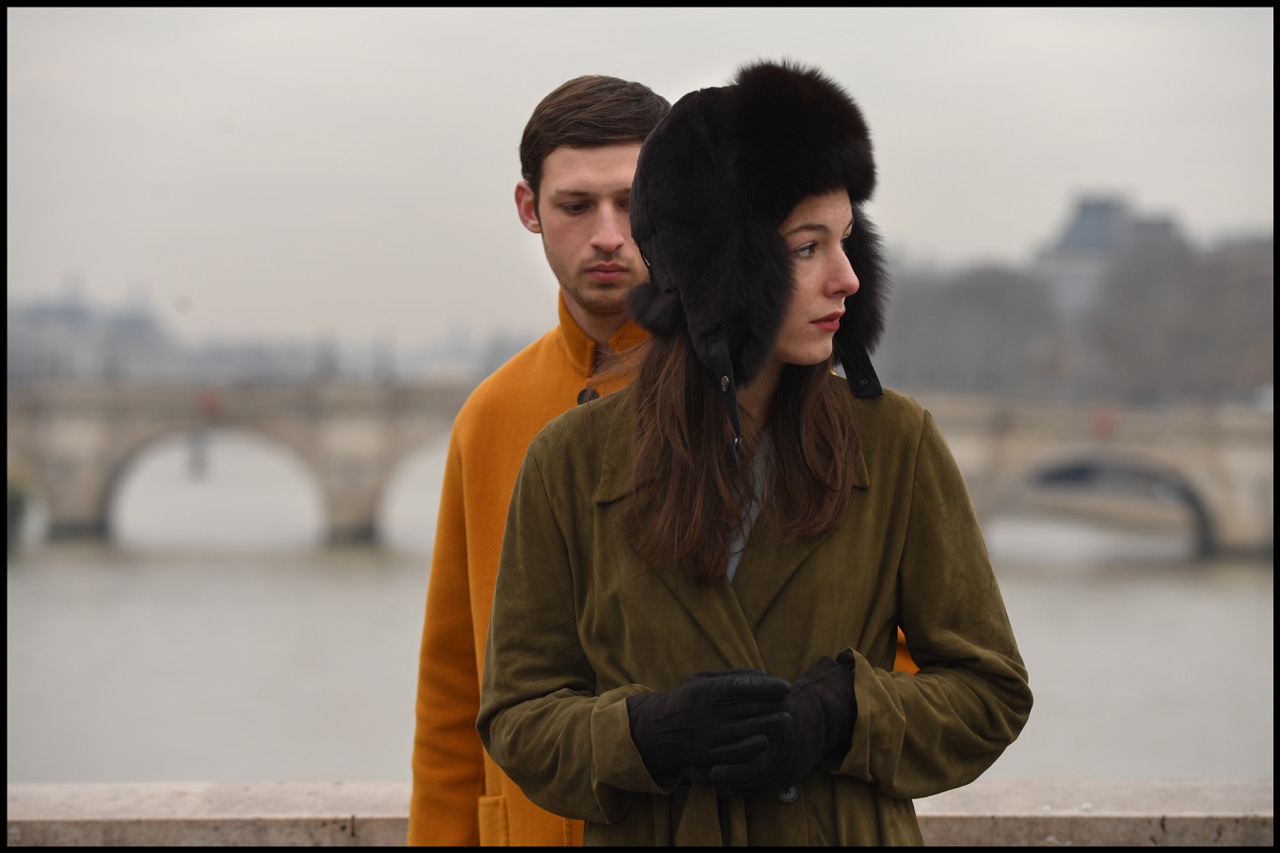 But the émigré declines the invitation of his posh pals to move in with them, choosing instead to install himself on the other side of Paris in a grim garret just large enough for a bed, a hot plate, and his pocket Larousse. Yoav will be a frequent visitor at his friends’ luxe flat, however, each drop-in marked by deepening psychosexual tension among the three—an arousal that’s primarily the result of the Gallic couple’s fetishistic fascination with Yoav’s Israeli-ness (especially his tales about his military service, a few of which are rendered in flashback) and, obversely, his unchecked Francophilia. 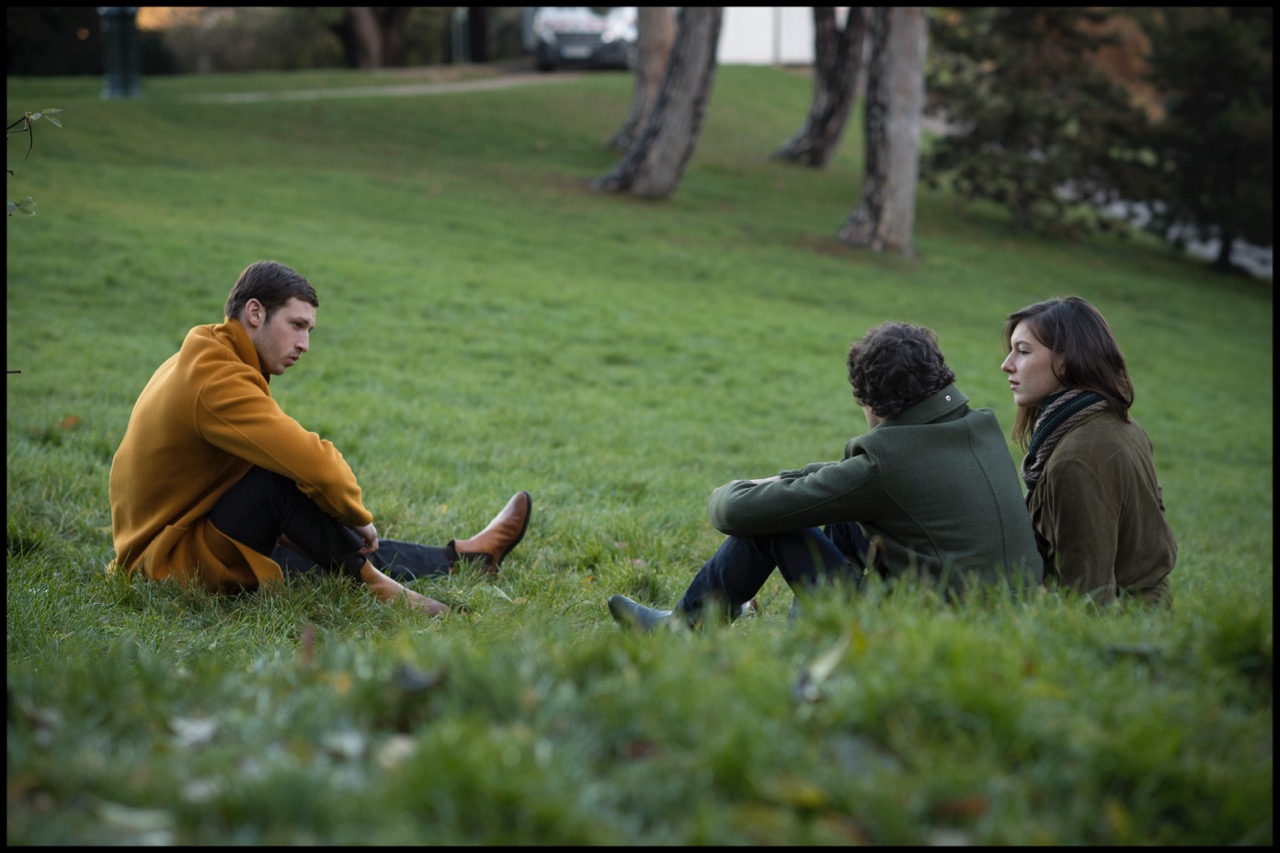 In his efforts to become fully fluent in his new tongue, Yoav approaches language acquisition as a martial art. “Words that strike, words that strike harder,” he utters via voice-over during one of his many increasingly agitated perambulations of Paris; it is while he is in motion or outdoors that his self-directed vocabulary lessons start to resemble an incantation (and sometimes an invocation). “I moved to France to flee Israel,” he tells Émile one night on a bridge over the Seine. Yoav then launches into a fusillade of adjectives: “Flee a state that is nasty, obscene, ignorant, idiotic, sordid, fetid, crude, abominable, odious, lamentable, repugnant, detestable, mean-spirited, mean-hearted.” 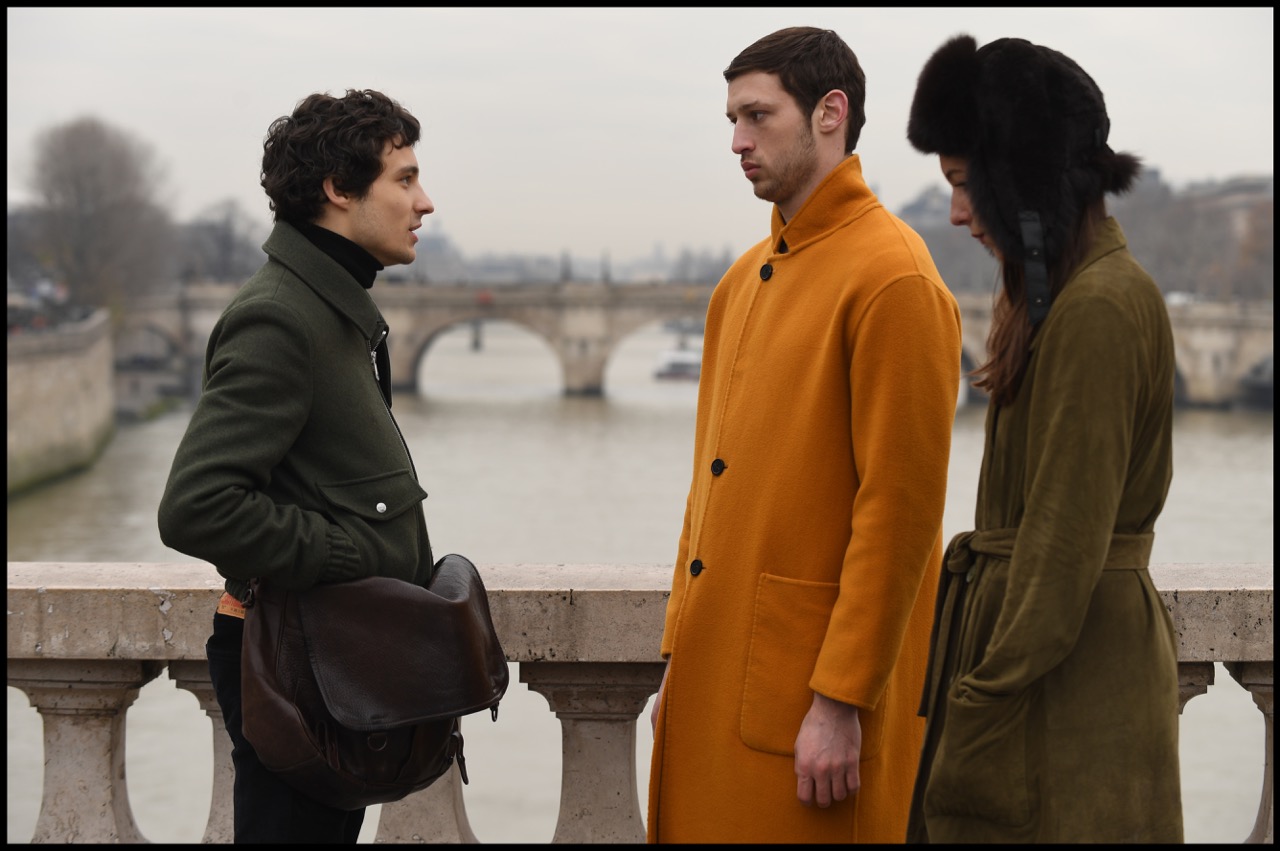 Yet Yoav’s thesaurus-enabled assaults are wholly distinct from the sick pageantry of hypermasculine behavior by his compatriots working security at the Israeli Embassy—where Yoav himself is employed briefly, if only to sabotage the diplomatic fortress’s rules and regulations, and where he aggravates his butch coworkers by insisting on speaking only en français. One of those muscular colleagues, Yaron (Uria Hayik), spins fantasies about how he would have thwarted the Nice truck attack of 2016 and loudly hums the Israeli national anthem while aggressively invading the personal space of his fellow Métro riders—who ignore him. An introductory handshake between Yaron and a sinewy French Zionist immediately turns into a krav maga farce.

Synonyms, which won the top prize at the Berlin Film Festival in February and recently played as a main-slate selection of the New York Film Festival, returns to themes explored in Lapid’s previous two movies. The vapid virility of an Israeli defense squad is astringently examined in Policeman (2011); the power of words is the central focus in The Kindergarten Teacher (2014), featuring a five-year-old poet (whose name is also Yoav). While no character in the predecessors of Synonyms delivers anything like Yoav’s modifier-glutted invective cited above, both of the prior films offer pointed—but crucially, never fatiguingly obvious—political critiques of Israel.

Some of the strange potency of Synonyms begins to lose its hold in the film’s final act, as Yoav, enrolled in a course for aspiring French citizens, learns, unsurprisingly, of the barbarity and savage contradictions in his beloved new country. The gore-soaked lines of “La Marseillaise” (“Let’s march! / So that impure blood / Irrigates our fields!”), for example, are recited by Yoav and his classmates once too often. Earlier, a desultory sequence of Yoav, desperate for cash, submitting to some ludicrous, X-rated demands superfluously reminds us that DIY iPad pornographers know no borders. 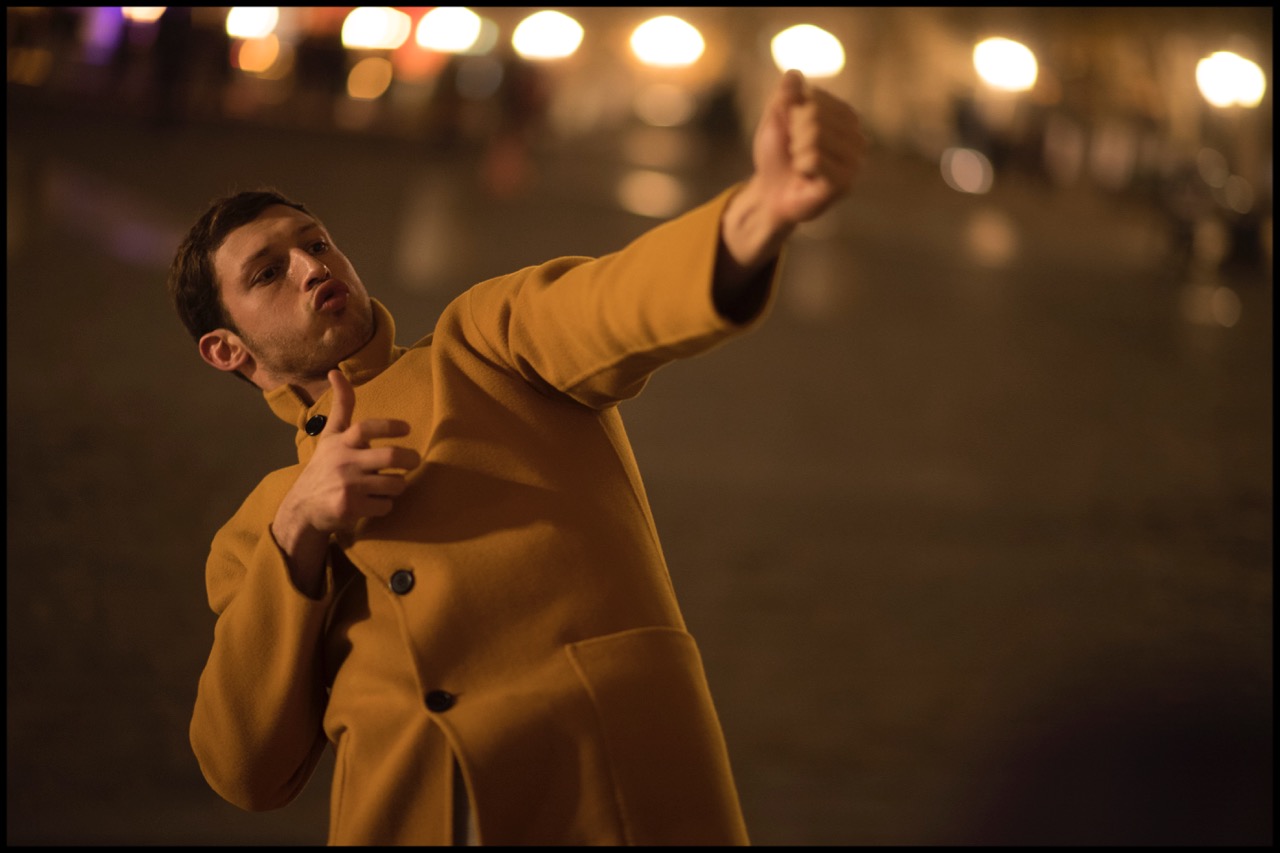 And yet even these enervating episodes in the otherwise bracing Synonyms don’t entirely hit dead ends, for Mercier, who appears in nearly every scene, is a consistently galvanic presence. A onetime acting student in Tel Aviv, he makes his film debut in Synonyms, a project that required both cerebral commitment (he spent a year learning French) and physical stamina (Mercier has several prolonged nude scenes; he is the only cast member in Synonyms filmed without clothes). Playing a character who constantly free-associates in a new language, Mercier demonstrates prodigious verbal dexterity. Yoav groups words together by meaning and sound, rattles off a lexicon of baked goods and other sugary treats, riffs a list of idioms and phrasal verbs. But Yoav also communicates just as vigorously through nonverbal means, especially via uninhibited, loose-limbed dance—whether alone in his flyspeck studio or among the throngs at an upscale bar gyrating to Technotronic. In the film’s concluding scene, though, he abandons both his words and his playful, gawky movements. Enraged, he relies solely on the most primitive of idioms: the brute force of his body.