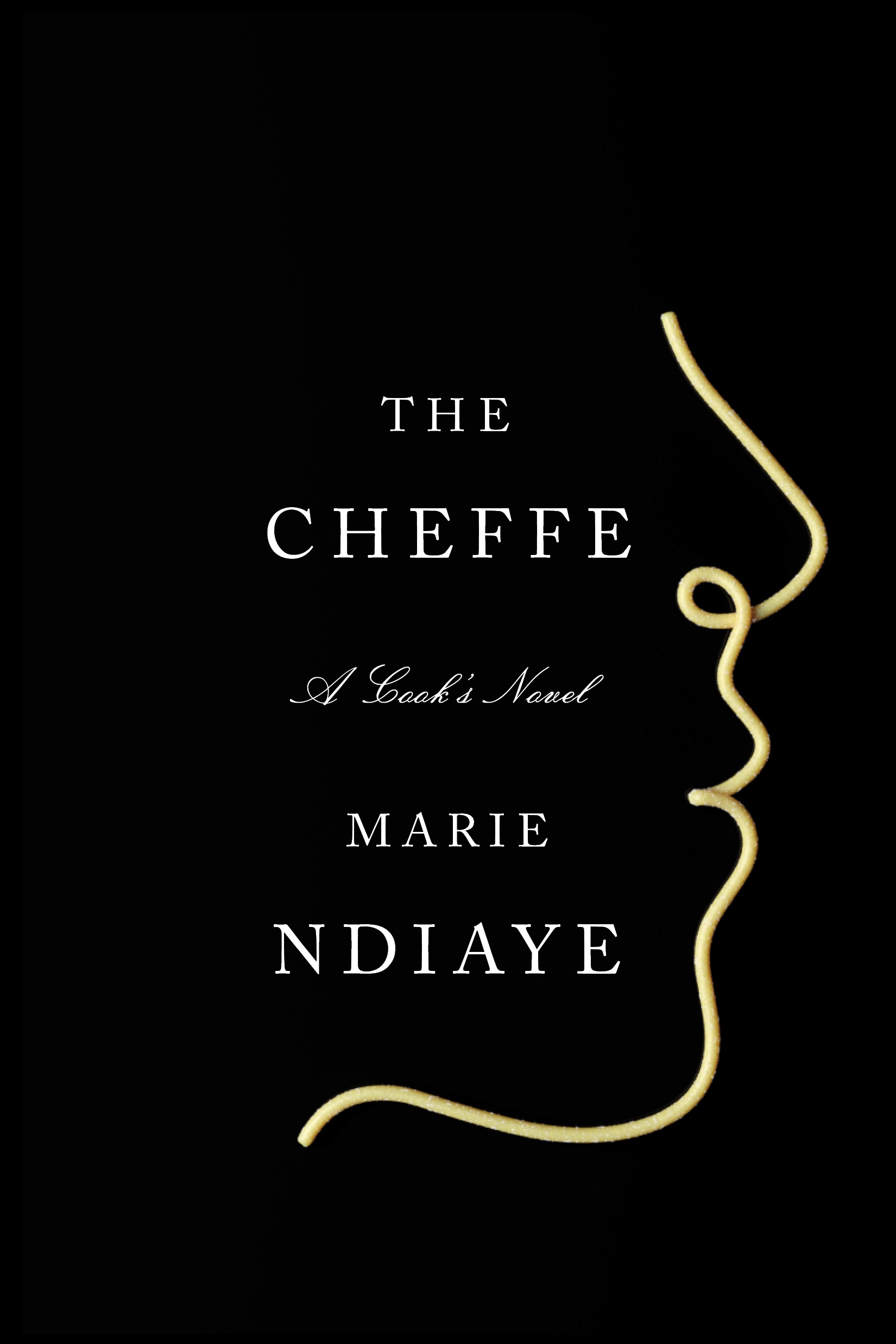 Reviews of novels by acclaimed French writer Marie NDiaye tend to open with a lament—one of France’s preeminent female novelists, the winner of the Prix Goncourt, the Prix Femina, and a nominee for the Man Booker International Prize, has yet to break through with an American audience. Her latest book, however, seems poised to clinch a US readership. Tracing the eponymous female chef’s unlikely rise to fame, The Cheffe is, on its surface, about French cooking and cuisine (and cookbooks sell so reliably well!). But readers should be disabused of any expectation of a simple pleasure trip. The Cheffe’s first success is a morbid trompe l’oeil, a chicken she’s ground and reshaped beneath the shroud of its own skin: “In its bloodred enameled cast-iron oven dish she brought out the huge chicken she’d massacred and then resuscitated, like a savage joke.”

Writing against cliché—e.g., cooking is a site of carnage, not delight—is vital to NDiaye’s novels. Borrowing from Freud, supernatural thriller, and family saga, her work is famously difficult to classify. Politically outspoken in life (she was once publicly reprimanded for haranguing Sarkozy’s draconian administration), her fiction is cagier in its critiques. Racism, sexism, and xenophobia moonlight as implacable, offstage menaces that plague deeply disoriented characters: parents grow younger, they become dogs; wives possibly sublimate into crows. The way in which the world seems to pick up and rearrange itself, unrecognizable and out of reach, echoes the grammar of a horror film, or else the process of going insane. Reading NDiaye is akin to coming across a previous patient’s psychological assessment on your therapist’s desk; you’re hopelessly drawn in, even as you ought to look away.

In The Cheffe, translated by Jordan Stump, it is the narrator’s unreliability, rather than gaslighting (as in Rosie Carpe, winner of the 2001 Prix Femina) or supernatural intervention (2013’s Ladivine), that generates NDiaye’s characteristic mystery and menace. Our narrator, a former assistant to the Cheffe, is eager to divulge intimate knowledge of the woman he admired, loved, and came to know “better than anyone,” a claim to intimacy that becomes increasingly taboo as the narrative progresses. The telling falls somewhere between direct address and Q&A with the “Q” suppressed—quips like “No, no,” “Oh yes, of course,” and “Yes, that’s right” respond to a phantom interviewer—while the prose, spliced and qualified, captures the stops and starts of someone struggling to maintain narrative authority: “That it was her own daughter misleading everyone, in vengeance for who knows what wrong, that must have hurt her, yes, terribly, I think.”

NDiaye is a class-conscious writer. But she bypasses literary fiction’s recent interest in the penitence of the privileged to train attention on economic desperation. Her characters, rarely elite, often uneducated, tend to hail from the most vulnerable echelons of society. In Three Strong Women, winner of the 2009 Prix Goncourt, a migrant woman sells sex to fund an escape across the EU border; in Rosie Carpe, a destitute and abused mother, French-born, arrives in the Caribbean deeply ashamed of her son’s clothes, which project a “poor imitation of middle-class improvement.” As for the Cheffe, if not for the impoverished “circumstances of her birth,” our narrator insists, “she would have made her name as a painter or a writer,” and among the many questions the novel raises is that of who has access to—and appreciation for—the high arts. The Cheffe’s “pure,” impecunious parents, who “worked at not being pitied,” are unmoved by her cooking, while the gourmand couple to whom she serves the resuscitated chicken are “enslaved” by the dish. They fear the Cheffe as they would “an amoral little sorceress” and regret, post-meal, that they are unable to maintain “the plane of spirituality she’d unassumingly led them to, a plane of joyful, accepted mystery.” It is typical of NDiaye to transform bourgeois pleasures—French cuisine, tropical vacations, interior design—into discomfiting forms of mild torture.

That the Cheffe possessed “a real loathing for invasiveness” sits uneasily with our narrator’s impulse to expose. One of her greatest humiliations, he tells us, is a widely circulated photograph taken in a rare unguarded moment outside her award-winning Bordeaux-based bistro, her face smiling, her hair loose, “looking more . . . like a mother just awarded a medal for her flourishing fecundity than the inflexible, austere boss we all knew.” The halo of her hair is a special violation—the Cheffe always wore it pulled back into a severe chignon. It’s tempting to read into this calculated inscrutability an echo of NDiaye’s own attempts to separate her biography from her work; the daughter of a French mother and Senegalese father, she has rejected the invitation to write on the behalf of the African diaspora or French people of color.

Given the Cheffe’s obsession with privacy, it should be no surprise that the most important motif in this gustatory novel isn’t her understated pear tart or her famous green-robed leg of lamb, but the human face, the entry point to interiority. The Cheffe takes care to keep hers “frozen in a neutral mask.” Hers was “the idea of a face,” the narrator says, “the emblem of a face” that disguised her own powers of perception: “She studied and interpreted faces more deeply than the rest of us, we who confronted the mystery of a face with our big, amiable grins, our faces ripped in two by sociability, all mystery banished.”

This fixation on faces is NDiaye’s riff on French philosopher Emmanuel Levinas’s ethic of the face-to-face encounter, whereby moral responsibility is founded in the immediacy of another human visage. Levinas also emphasized the limits of the self and the unknowability of the other, for whom the self is nonetheless morally responsible. Our narrator stands in disregard of this idea in his “quest to understand the Cheffe’s soul.” His devotion presents itself as a perversion of intimacy and moral responsibility, as the indulgence in another kind of appetite: the will to consume another person.

I’ve often wondered if it’s NDiaye’s gravity and pessimism, a decidedly “Francophone” combo, that have erected such a barrier for American readers. Psychological thrillers like Rosie Carpe or 2007’s My Heart Hemmed In are predicated on irony and yet are utterly without humor—it is not safe to laugh. A novel like Three Strong Women ​offers no escape hatch from the social ills that permeate it: when a white father reconnects with his biracial son, a swarm of crows descends in a Hitchcockian attack. NDiaye’s treatment of Levinas, too, is characteristically ambivalent; to emphasize the sanctity of difference stands as a corrective to the narrator’s invasiveness, but it also risks exoticization. The Cheffe “wanted no part of worship with erotic overtones, real or perceived.” But to romanticize others—to elevate them to gods—is the logical conclusion of taking certain parts of Levinas too much to heart.

At end, there are those who will complain that NDiaye’s work is “too challenging” to enjoy. But novels that go down easy come with hazards of their own: as our narrator warns, “you don’t feel respected as a customer and an eater, you feel ashamed for the cook.”

Jessi Jezewska Stevens’s debut novel, The Exhibition of Persephone Q., is due out from Farrar, Straus & Giroux in March. Her fiction and essays appear in the Paris Review, Tin House, the Los Angeles Review of Books, BOMB Magazine, Harper’s Magazine blog, Guernica, and elsewhere. She lives in New York.