Bigger and better? An evaluation of the museum’s expansion. 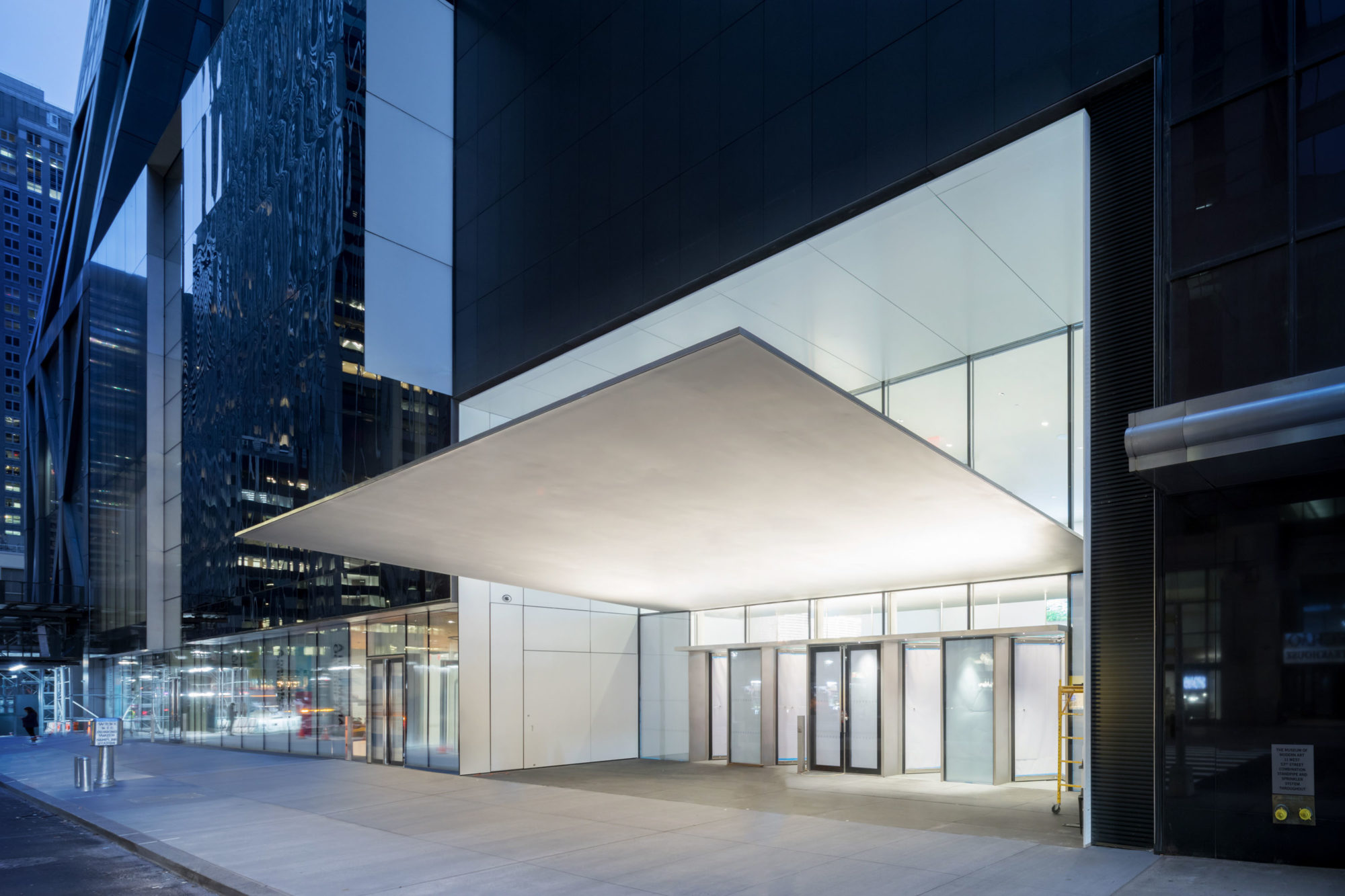 The Museum of Modern Art that I was introduced to in 1992 still adhered to the time-honored formula the institution had followed since forever (or at least since the 1950s, when its initially more eclectic outlook shifted in a decidedly conservative direction). It was an enfilade of rooms, a succession of movements, and the inexorable march of history that carried you from Cézanne to cubism to surrealism to Pollock, and then, if you had the stamina, to a little pop and a little minimalism and a little conceptual art. But as time has passed, the challenge for MoMA (and indeed for any museum that collects the art of today as part of its mission) has become how to deal with the fact that “the modern” gets chronologically longer as each day goes by, geographically bigger as regions beyond Europe and America become sites of interest for curators and scholars and audiences, and increasingly populous as the achievements of those artists who have been left out of largely white and largely male institutional histories are finally recognized. 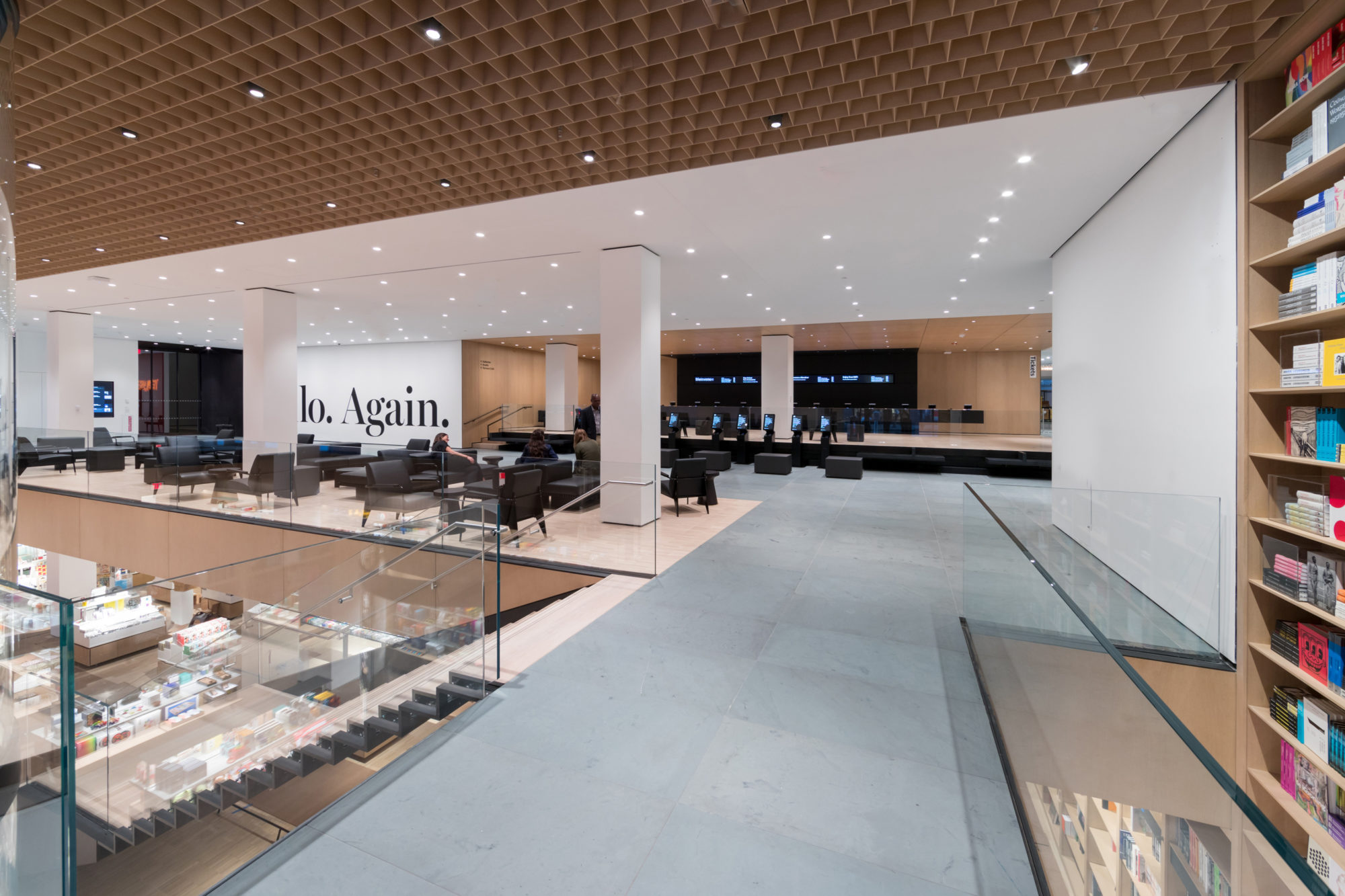 Those are the prime considerations that underpin MoMA’s expansion (achieved by the architectural firm Diller Scofidio + Renfro), which has added more than forty thousand square feet of exhibition space. With a desire to tell new and different stories about modern art via the museum’s collection, MoMA has opted to tell more of them; you might call it an additive approach to art history. (The effect of this new approach is relative, of course; before the renovation the museum was showing about one thousand of its two hundred thousand objects at any one time, and now shows about two thousand five hundred—still only around 1 percent of its holdings.) By focusing less on traveling exhibitions, and with the intention of making its permanent collection hanging less permanent, rotating what’s displayed in some of the rooms as often as every six months, Ann Temkin, chief curator of painting and sculpture, and her colleagues will have the opportunity to shuffle the collection, show off their strategic new acquisitions, and bring long-forgotten treasures out of the vaults. The curators are doing their best to undo the pressures of institutional history, opting for thematic galleries that keep to a more or less chronological structure, but with lots of geographical byways and productive anachronisms thrown in. Gone, for the most part, are the isms, the insistence on naming movements. And where in the past media were segregated from one another—painting and sculpture rarely got to play with photography, prints and books, or films—the curators are now striving for integration. 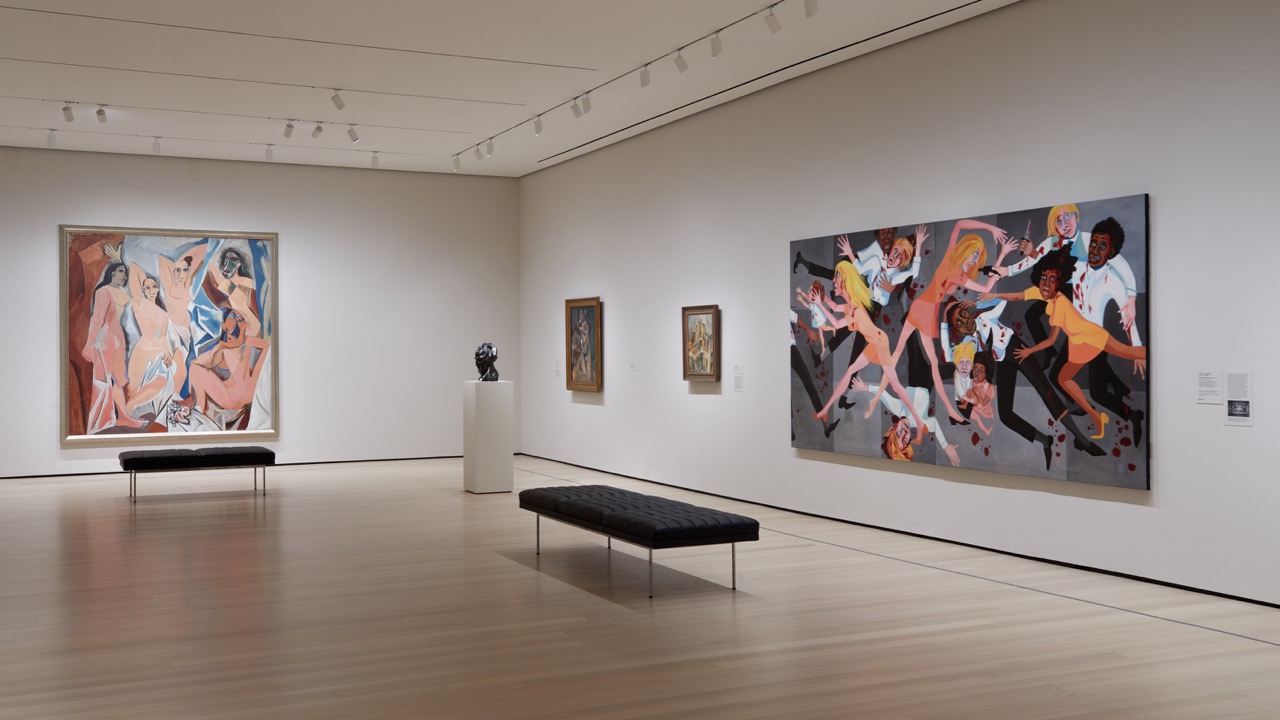 The potentials of this new strategy are most visible in a much-commented-on room devoted to Picasso’s Les Demoiselles d’Avignon (1907)—long treated as a jewel in the MoMA crown. Now, in addition to some of the artist’s earlier rose and blue period works, and his later forays into cubism, Picasso’s primitivist fever dream of threatening female sexuality is juxtaposed with two important later works: Faith Ringgold’s American People Series #20: (Die) (1967) and, a bit further away, Louise Bourgeois’s Quarantania, I (1947–53). The interventions are formally sublime: Ringgold reimagines Picasso’s 1937 canvas Guernica (which had been on extended loan to MoMA from 1940 to 1981) as a scene in the violent struggle for civil rights, taking up the color scheme of Demoiselles, but intensified and fractured, and introducing black people, rather than racist fantasies of blackness, into the modernist frame. The Bourgeois sculpture, phallic and yonic at the same time, undoes the insistent “othering” of the feminine that Picasso was so infuriatingly good at achieving. Next to these, Picasso is put in his place: one that nods to his generative role in twentieth-century art, but less as a heroic father of what is to come and more as a slightly embarrassing uncle who must be acknowledged if not quite respected. 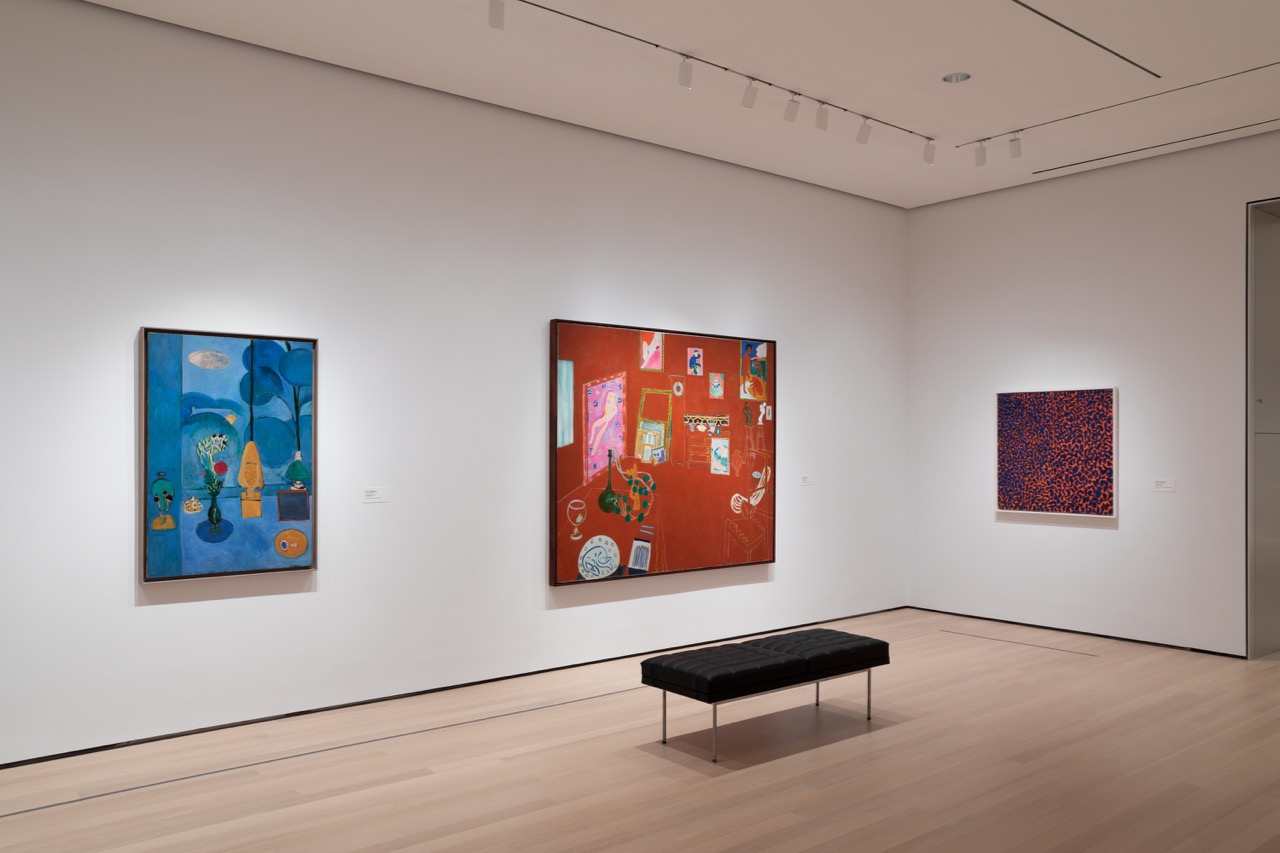 Likewise, finding contemporary artists Pope.L and Rirkrit Tiravanija in a room devoted to the 1960s global Fluxus movement, or Mondrian and Rodchenko in an extraordinary exhibition showing highlights from a collection of postwar Latin American modernism donated to the museum by Patricia Phelps de Cisneros, are subtle and important reminders of the way in which formal impulses neither start and stop according to strict art historical eras, nor respect geographical boundaries. Such interventions don’t always hit the mark in so satisfying a way, however. The decision to situate Alma Thomas’s Fiery Sunset (1973) near Matisse’s The Red Studio (1911), in a room without any other surprises, doesn’t serve either artist well; the Thomas is dwarfed by the scale of the Matisse, and the Matisse seems old and dull next to the vibrating color of the Thomas. It also has the whiff of tokenism. How much more illuminating had Thomas been represented in a more fulsome way, or if she had been joined by other black artists working in the Washington school of abstraction, a group heavily influenced by Matisse’s way with color. (Meanwhile, in a room titled “In and Around Harlem,” not a single object by a black woman is to be found.) 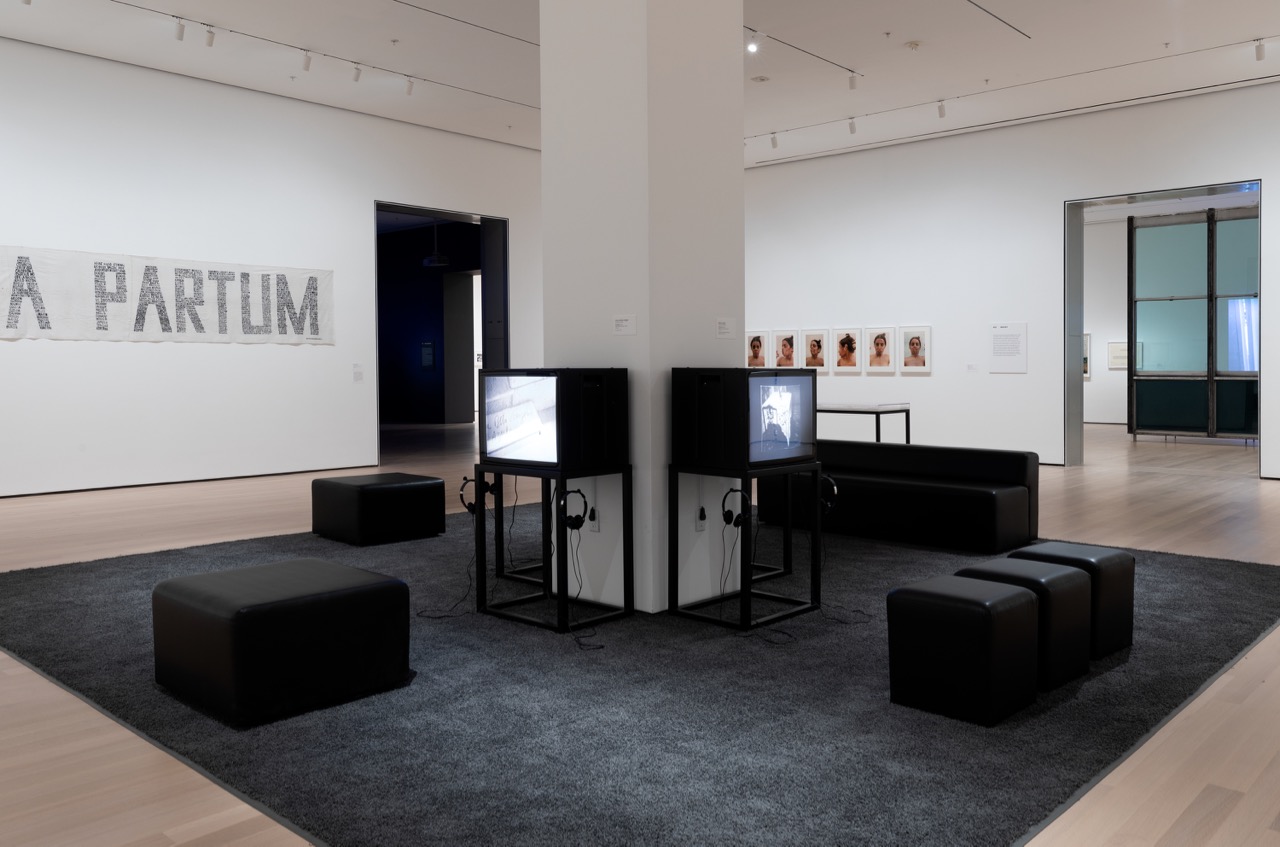 There is also a great deal of inconsistency, especially as one descends from the fifth floor (devoted to art before the 1940s) to the fourth (1940s–70s) and the second (1970s–today); in the last case, the categories become downright baggy and on occasion nonsensical. I was elated to see a room devoted to “Idea Art” that places four videos by feminist artists—Martha Rosler, Valie Export, Nancy Holt, and Anna Bella Geiger—alongside conceptual work by Dan Graham, Dóra Maurer, and Bernd and Hilla Becher, and protest art including a banner by Ewa Partum and ephemera related to the Art Workers Coalition’s actions against MoMA in the late 1960s. Here, the shift away from a strictly defined ism offers a chance to consider a range of practices beyond conceptual art’s usual dry fare. But a room called “Transfigurations”—which intends to bring together “artists [who] explore how the female form—through both defiant and poetic means—inhabits the world”—is so general as to be meaningless, especially when it comes to the inclusion of Lorraine O’Grady’s Untitled (Mlle Bourgeoise Noire)—photographs from guerilla art performances she did in 1980 and 1981 that were about the racial segregation of the art world, rather than a questioning of femininity per se. (Too bad the curators didn’t put O’Grady’s work in the “Idea Art” room, which pretty much entirely avoids issues of race.) 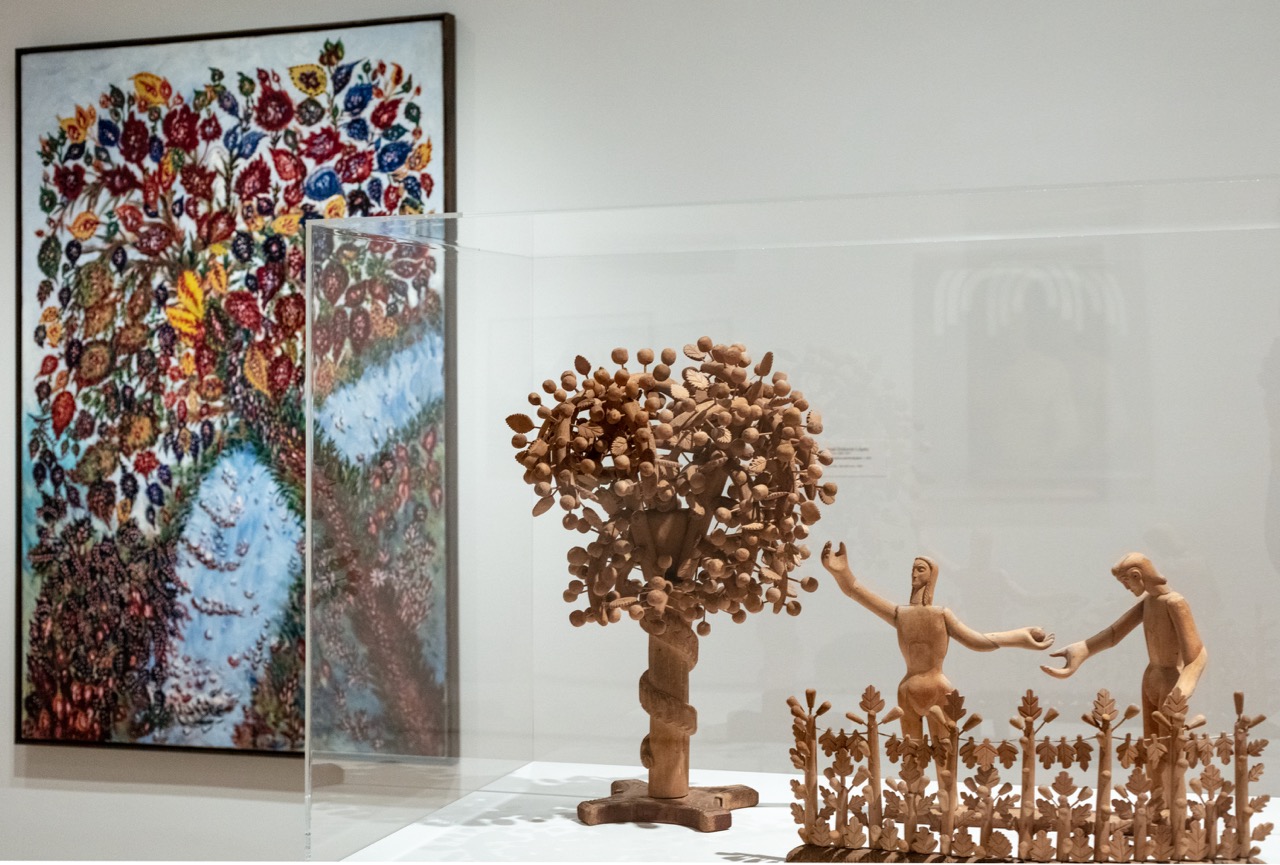 And the question remains whether an additive approach is a sufficient model for museums as they evolve in response to art scholarship, the art market, and geopolitical shifts—or if it is a practical one, given its potentially endless space requirements. What is called for at this juncture is, on the contrary, a disruptive model—one that reconfigures the “Cézanne to Pollock and beyond” march of art history, to reorient us in a consequential way. The new rehang offers too few disruptive moments. We are still asked to admire the heroes—Matisse and Picasso, the readymade, expressionism, surrealism, and Paris all receive substantial representation—even if those heroes are now surrounded by other comers. It is the difference, say, between Lynne Cooke’s groundbreaking 2018 exhibition Outliers and American Vanguard Art at the National Gallery of Art in Washington, DC, which borrowed heavily from MoMA’s collection of “outsider art” amassed by Alfred Barr Jr., and MoMA’s new room devoted to “Masters of Popular Painting,” which draws from that same cache. Cooke’s show attempted to unthink the categories of outsider/insider by instead seeing an “outlier” impulse that runs through the twentieth and into the twenty-first centuries, recognizing that figures like Bill Traylor, José Dolores López, and Horace Pippin, no less than Jacob Lawrence, Marsden Hartley, Jessica Stockholder, and Cindy Sherman, were integral to modernist arguments. MoMA’s rehang, sadly, extracts the outliers from Cooke’s speculative new history and places them firmly back into their own room. Equalish, but still separate.