A memoir of Adderall addiction by Casey Schwartz. 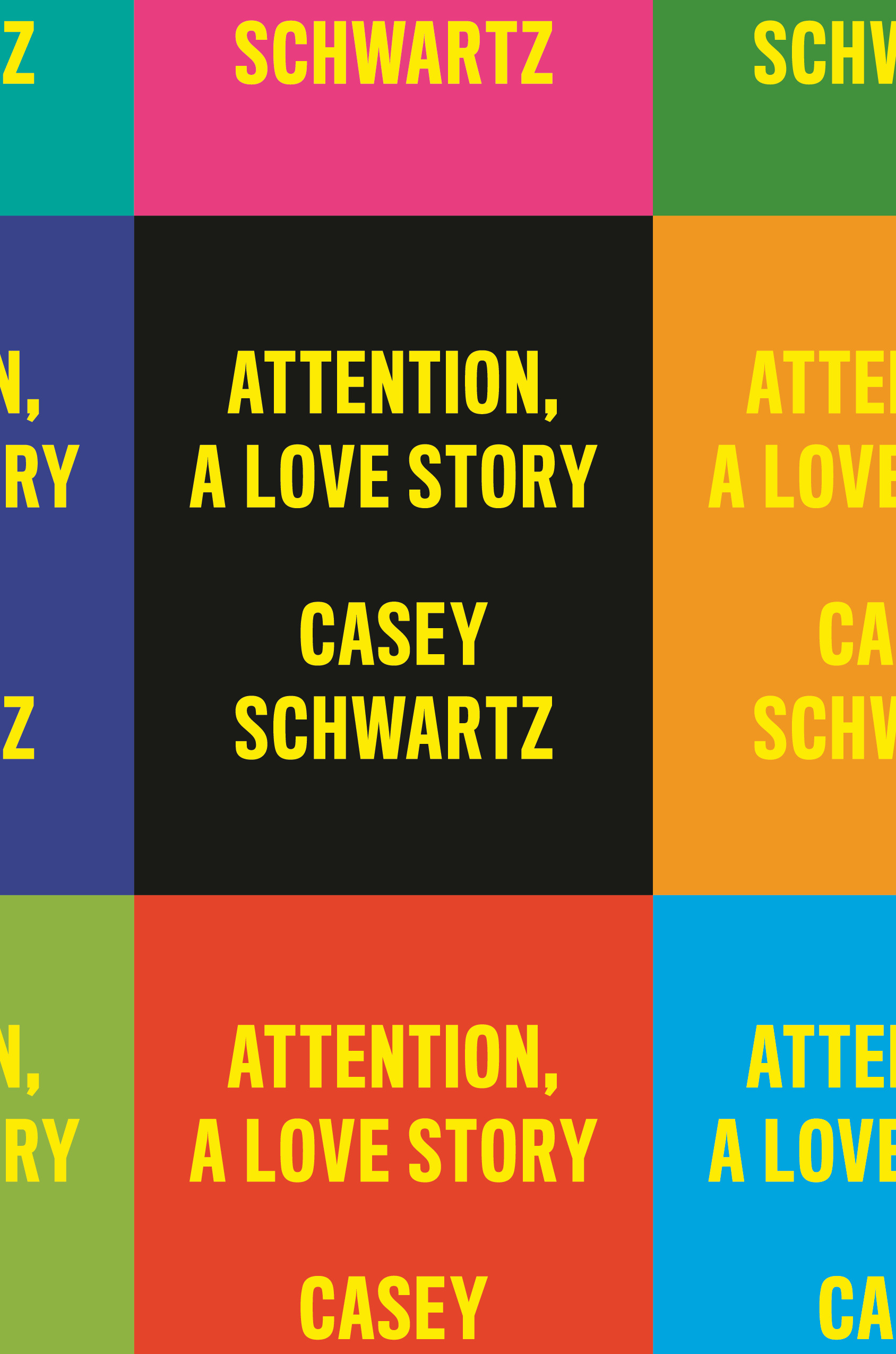 It was the title that drew me to this book. I guess you could say my attention was grabbed. The problem with having such a great title is that it’s a lot to live up to. Attention may be a form of love—I certainly think so. But attention, as we have all come to understand if not entirely accept, is also the currency of the age. You pay with it. Early in the book, W. H. Auden is summoned for a remark: “ ‘Choice of attention—to pay attention to this and ignore that—is to the inner life what choice of action is to the outer. In both cases, a man is responsible for his choice and must accept the consequences, whatever they may be.’ ”

Attention: A Love Story is framed as a story of recovery. What Casey Schwartz is recovering from is not inattention, but rather the drug meant to solve that problem. “The story begins with the Adderall” is the first line. “And, like any love story, I remember everything about the moment it began.” For Schwartz it began in her freshman year at Brown University, when she was faced with the dual crisis of a paper she hadn’t written for a book she hadn’t read. A friend hands her an Adderall, saying, “ ‘I can’t stand them. They make me want to stay up all night doing cartwheels in the hall.’ ” Schwartz’s first thought: “Could there be a more enticing description?”

She swallows the pill and heads to the library, where she is “locked in the passionate embrace of the book.” She finishes the paper at dawn, filled with the depleted ecstasy of a lover who has been up all night. Schwartz recalls the pleasure she took in that moment: “I was alone in my secret new world, and that alonenesss was part of the great intoxication. I needed for nothing and no one.” Under the tutelage of this new lover, the kid who was “subject to fits of lassitude and a tendency to eat too many Swedish Fish” transforms into “a steely, undistractible person.” Adderall is her constant companion for ten years.

Schwartz is a Manhattan kid of the old school, before the creative class moved to Brooklyn: her mother is the author and Vanity Fair contributor Marie Brenner, her father the novelist and radio personality Jonathan Schwartz, who “would press his favorite authors on me, his every tone and gesture conveying their sacred importance: Philip Roth, J. D. Salinger, Elizabeth Hardwick, Renata Adler.” (The guy has good taste.) It should be said that all these authors are poet laureates of the nervous breakdown. Also, her father began making these recommendations when she was six. “Writing is one of the hardest jobs,” her father tells her in Carl Schurz Park, where he pushes her on a swing. “I believe it is what you are going to do.”

I enjoyed the memoirish opening chapters, and happily went along as she starts an intellectual exploration of her subject, delving into the work of William James and his peers. She astutely notes that the whole concept of attention took on fresh urgency as a field of study in the late-nineteenth century, when “workers were expected to stand in factories all day and somehow maintain perfect vigilance throughout.”

The journalistic adventures are somewhat more problematic: Schwartz visits the house where David Foster Wallace (a necessary station of the cross for anyone interested in the intersection of addiction, attention, pleasure, and despair) hung himself. She sneaks around the back to peer at the patio where the act of self-annihilation occurred, and calls a friend to tell him what she is doing. “Is this night going to end with me bailing you out of jail?” he replies. I think of Ross McElwee and Geoff Dyer and the great tradition that mingles self-mockery and exploration. (I think of Elizabeth Wurtzel, too. Is this book Adderall Nation? I would have to read Prozac Nation to find out. I only own Bitch.)

Attention is written from the perspective of the (mostly) recovered addict, and there is a wonderful moment that encapsulates what was lost by starting the drug, and then regained by going off. It comes when she talks about a Tracy Kidder book she read in her pre-Adderall days. There was a pineapple Life Saver that appears in its pages. A detail that stayed with her. A tiny, irrelevant detail, that somehow pulls the experience of the book into focus. The sort of detail whose recollection might have been excluded by the narrow focus of the drug.

When Schwartz turns her attention to the tech gods of the West Coast (not a group known for their sense of humor), my interest waned; the tech industries’ manipulation, and colonization, of our attention is an important subject, but it isn’t much fun reading about these guys and the sleek hotel lobbies where Schwartz met them. Salinger and Adler are replaced with references to books with titles like Deep Work and Hyper-focus. Characters are introduced with references to page views of their TED talks. The writing gets a bit flat. I put the book down.

To paraphrase a remark from Jamaica Kincaid, if you put a book down, does it suggest a shortcoming of the book or of the reader? Many of my favorite books I’ve read only after picking them up and putting them down numerous times over the years, before finally plunging forward and finishing them. (I have yet to complete Infinite Jest, and am still in the process of starting The Pale King every other year, usually around tax time.)

When Schwartz makes passing reference to a startup that has raised millions promising to condense nonfiction books into elevator pitches, I wonder if this book isn’t the perfect candidate for such treatment.

A couple of months later, I resumed reading. It was now the Pandemic Era. I was, like many people, simultaneously riveted by the news and unable to concentrate on anything. My anxieties about my own “choices of attention” were a preexisting condition, as it were, but the Quarantine Era heightened the book’s topicality.

She speaks to a number of figures on the neuro-shaman spectrum, including Gabor Maté, whose focus is trauma and inheritance. After meeting with him in Vancouver, she travels with him to a high-end ayahuasca retreat in Central America. Returning to Kincaid’s formulation, perhaps my resistance to this section was due to me and not the book, but I wish she had approached the retreat, run by a man whose previous ventures included a chain of strip clubs in airports, with some of the deadpan skepticism with which Wallace took his famous cruise.

In the book’s last chapters, the personal reasserts itself dramatically. Her father has become the target of a misguided, she feels, #MeToo missile fired from an undisclosed source. He is exiled, Joseph K. style, from his job at WNYC, where he had a weekly show for decades. Both Schwartzes, Jr. and Sr., are understandably aghast by this development. For a moment, Attention seemed poised to join Meghan Daum’s recent book, The Problem with Everything, as an examination of the side effects of our virtue-signaling age.

In the last pages, the pineapple Life Savers per-line ratio happily jumps. After working through the drama of her father, she takes a magnificent if arduous train journey across India with her mother. “On the fourth day of this experience, at around 4:30 in the morning, a loud knock came on each cabin door. The train was stopped; all was inky darkness outside the windows. Today’s activity was tiger spotting at a private tiger preserve. The catch: tigers, threatened with extinction, were not known to be commonplace in this part of India.” Could be a line from an Edward St. Aubyn novel, but her mood is generous, not caustic.

Later, she witnesses her mother in a state of deep absorption while interviewing two men who work on the preserve. The feeling in that moment is one of longing, envy, admiration, ambivalence. Her mother’s sense of engagement seems both to warm her and exclude her; the moment feels like a continuation and a refutation of that solitude Schwartz experienced in the college library on that first night on the drug. In this closing passage, the book’s subject—the story of a bright young woman in search of self-knowledge, wrestling with the expectations placed on her by herself, her parents, and the world—shines through.

Thomas Beller is the author of four books, most recently J. D. Salinger: The Escape Artist, which won the 2015 New York City Book Award for biography/memoir. His fiction has appeared in the St. Ann’s Review, Ploughshares, the New Yorker, and Best American Short Stories 1992. A founder and editor of Open City Magazine and Books from 1990 to 2010 and the website Mrbellersneighborhood.com, he is currently an associate professor at Tulane University.