A new take on the art and afterlife of Bauhaus weaver Anni Albers. 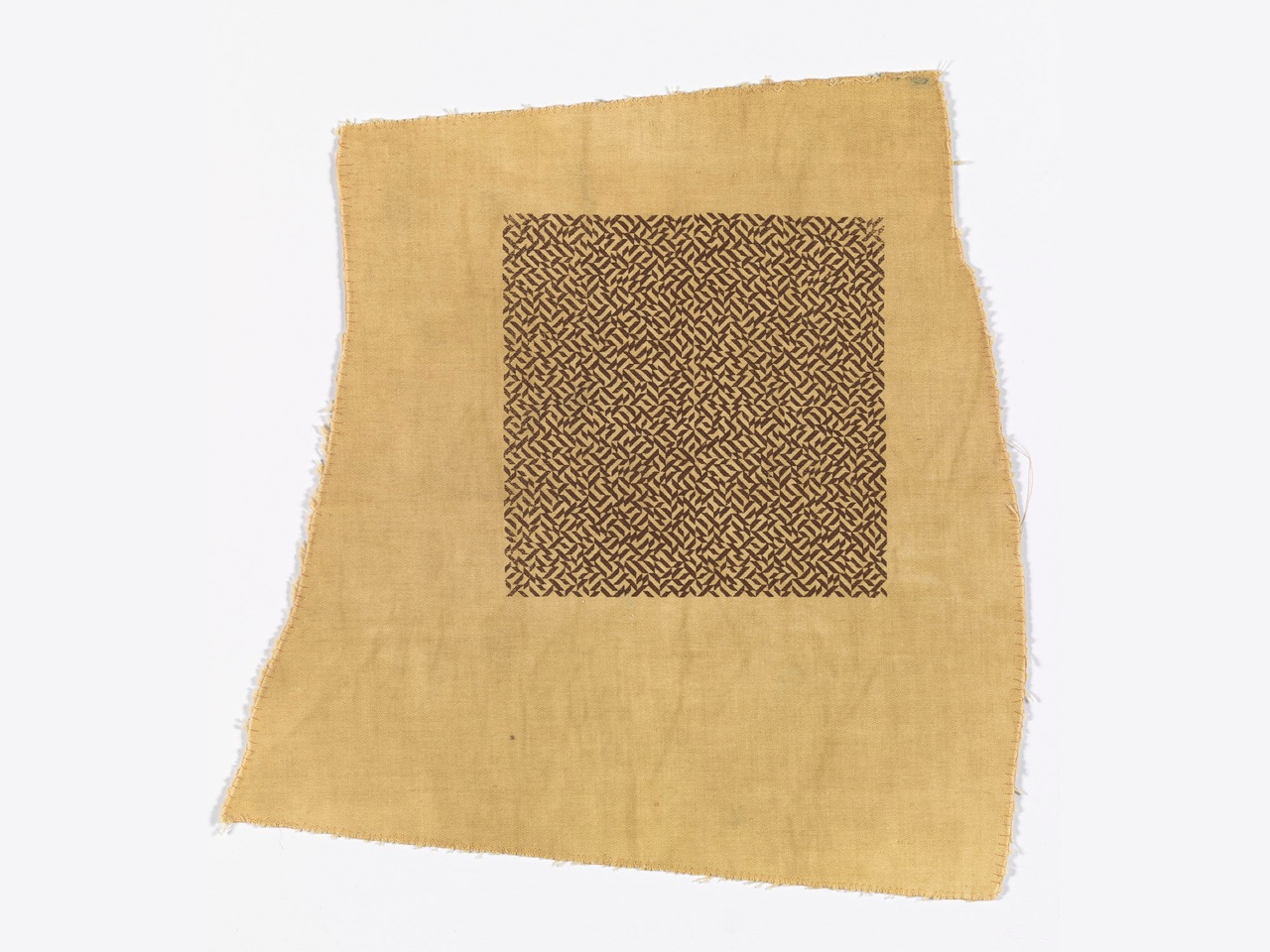 Judging by her well-received fall 2018 retrospective at Tate Modern and her recent 2019 solo show at David Zwirner—the first since her estate began to be represented by the powerhouse gallery—it is clear that Anni Albers is having a moment. Not just a major-museum-and-hot-market moment (though it is that, too): these necessary reevaluations help place her at the center of twentieth-century modernism. Maneuver, a spare and elegant group show curated by Lynne Cooke at the Artist’s Institute, extends that reassessment, revealing how the influential Bauhaus artist, weaver, author, printmaker, and textile theorist has also been a productive springboard for a range of contemporary practices. 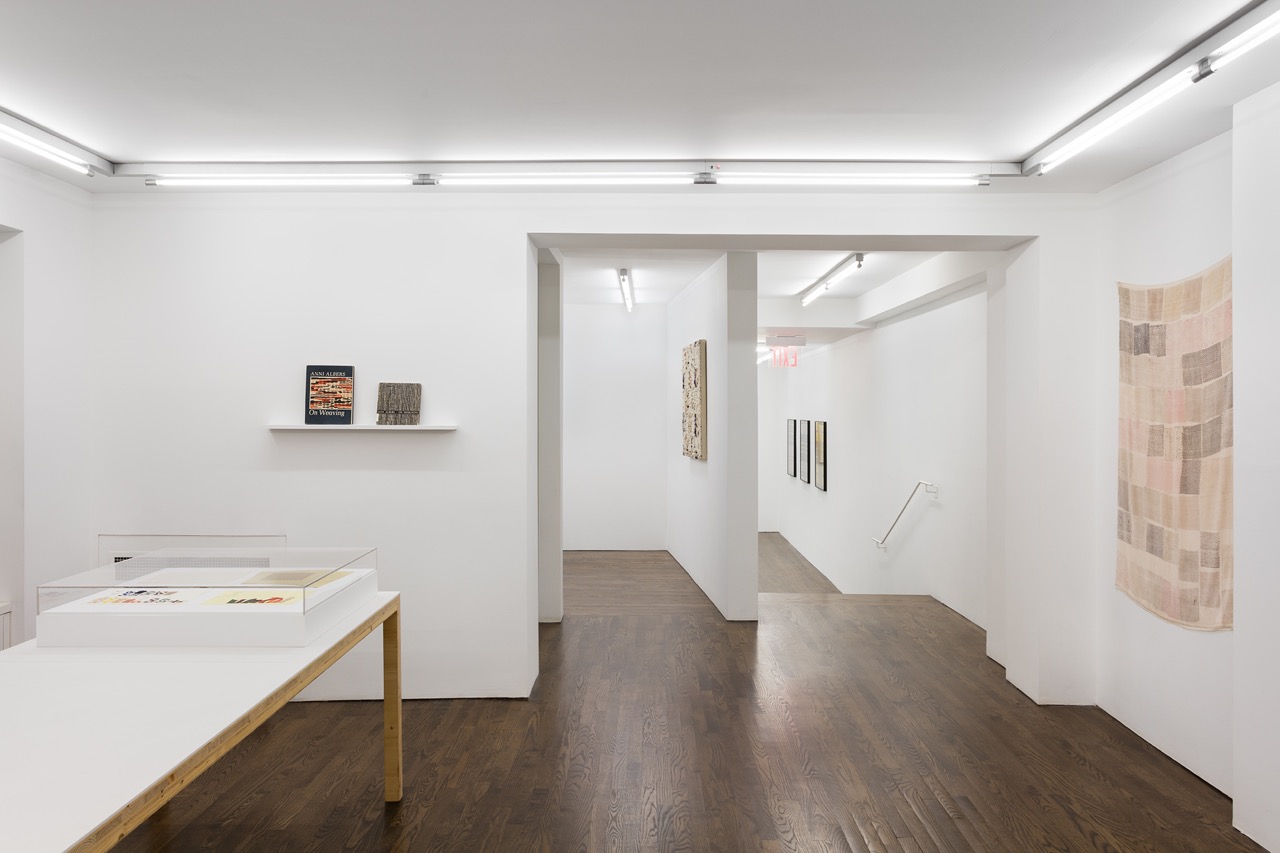 A counterpoint to Albers’s recent monographic presentations, Maneuver highlights artists whose works from the last fifty-odd years fall in the wake of, and are very much in conversation with, the multivalent legacy of Albers (1899–1994) as a writer and as a maker. Taking as its point of departure her book On Weaving, first published in 1965 and still the high-water mark for rigorous description around the horizontal/vertical interface, Cooke’s exhibition brings together five artists from the US and Germany—Polly Apfelbaum, Sarah Charlesworth, Zoe Leonard, Ed Rossbach, and Rosemarie Trockel—to reveal facets of Albers that go beyond the simplistic understanding of her as a craftswoman. Cooke elucidates how for Albers, as well as for these artists, weaving is less a handicraft than a maneuver (defined by the curator as a “directed, or planned and controlled, set of decisions”) that can be tactically deployed in the service of industrial production as well as fine art. 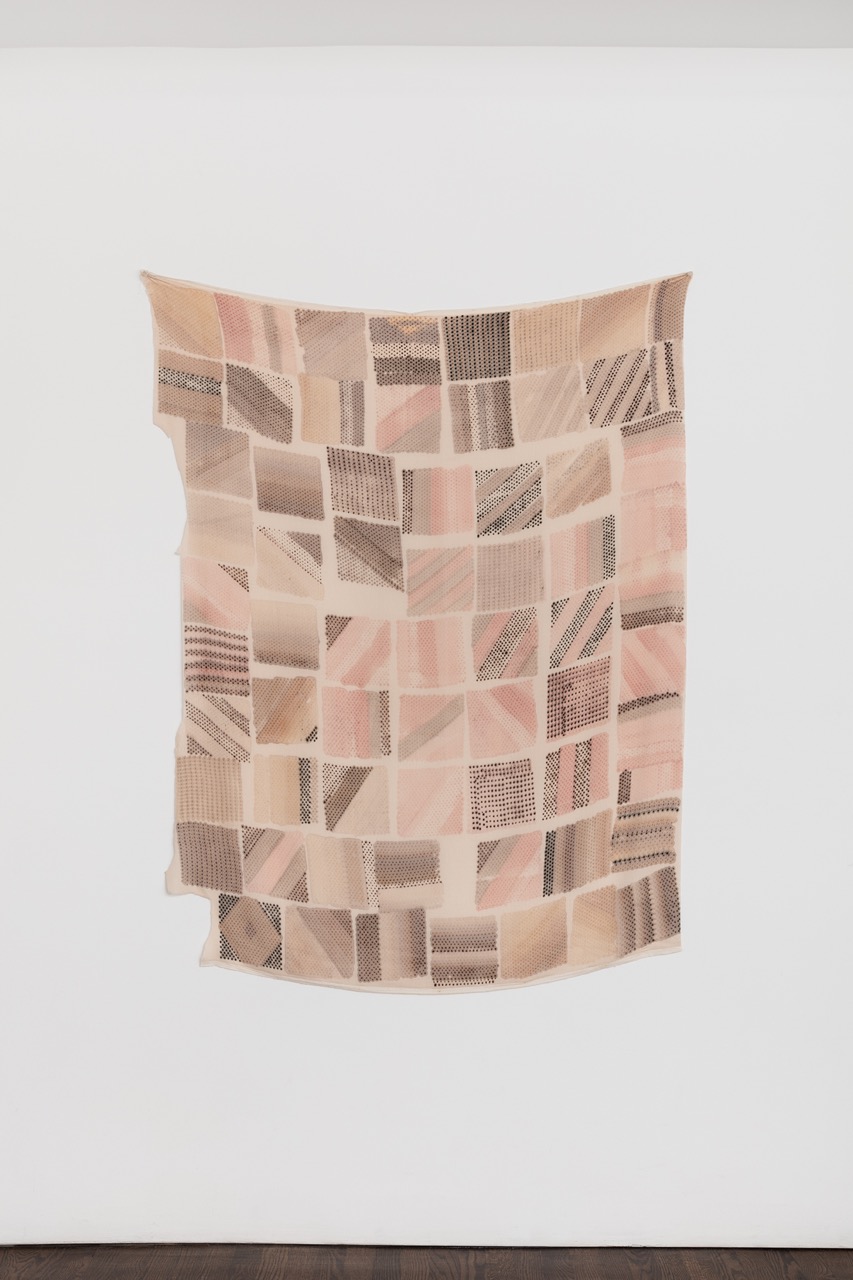 Cooke has chosen a handful of thoughtful examples for each of the five artists. Apfelbaum, for instance, is represented by two wall hangings from 2015 made of thin silk rayon velvet whose checkered motifs are drawn from a mid-century reference book of weaving patterns. The pieces are delicate and also strikingly graphic, with irregular yet assured dot-filled squares filling their surfaces. Leonard’s fascination with texture and structure is evident in her up-close photographs of textiles found in her own domestic space, including the familiar loop pile of mass-produced terrycloth, made strange here by its translation into a flat black-and-white picture. Originally created in response to Albers’s 1957 essay “The Pliable Plane: Textiles in Architecture,” Leonard’s five-part series extends her explorations of the ways that photographic technologies do and do not transmit knowledge about the tactile nature of fabric as she connects the machinic, reproductive device of the camera to the machinic, reproductive device of the loom. 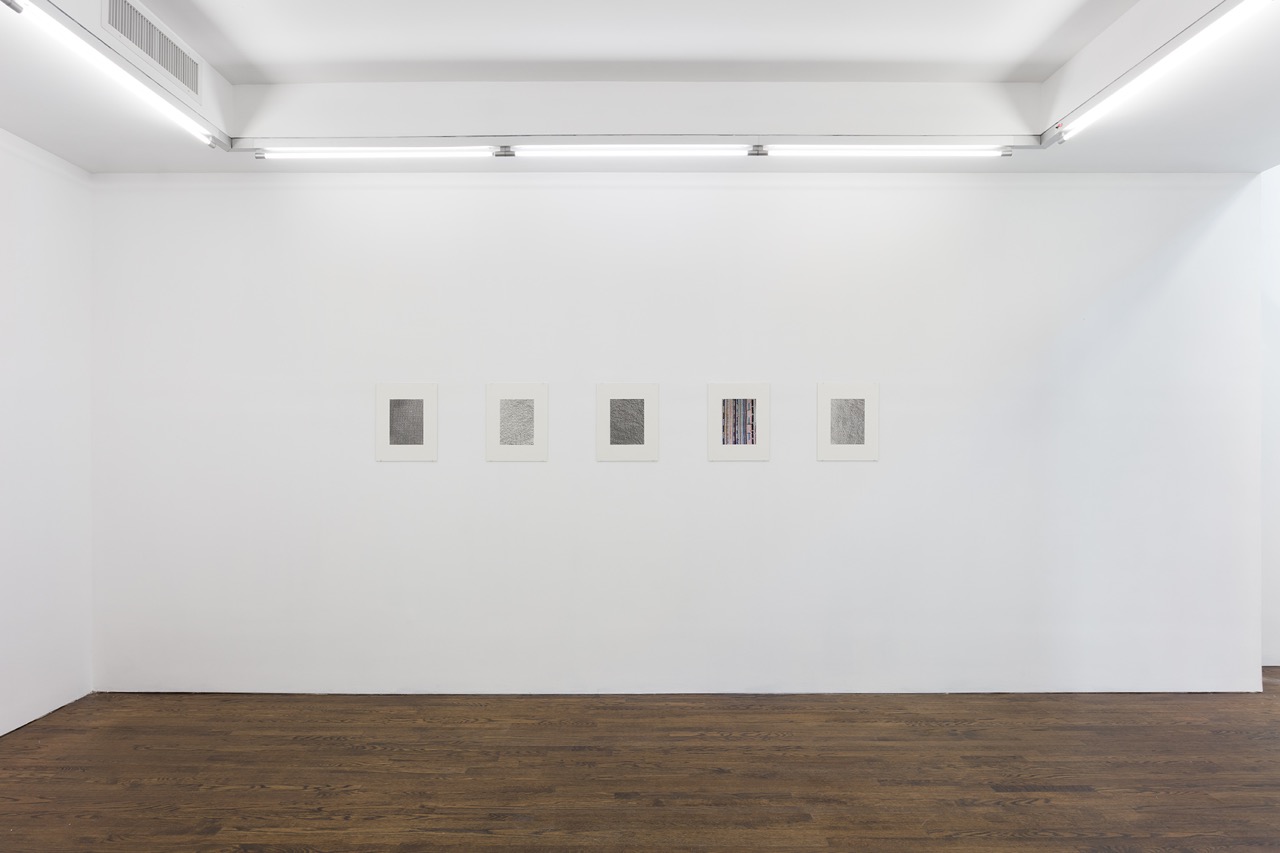 Albers’s later work, as Cooke notes in the gallery brochure, “positions the hand as the facilitator of the apparatus in acknowledgement that reproducibility and seriality lie at the core of woven form.” But Maneuver wisely insists that there will always be wobbles within technical structures. Leonard’s extraordinary color photograph of what appears to be an ordinary bathmat, with its gently askew rows of nubs that suggest imperfection and wear, also revels in fiber’s bodily associations, its peculiar hominess and what I would call its queer intimacy—that is, the way it veers away from the realm of the familiar by imbuing a “low,” everyday artifact with an almost erotic charge. 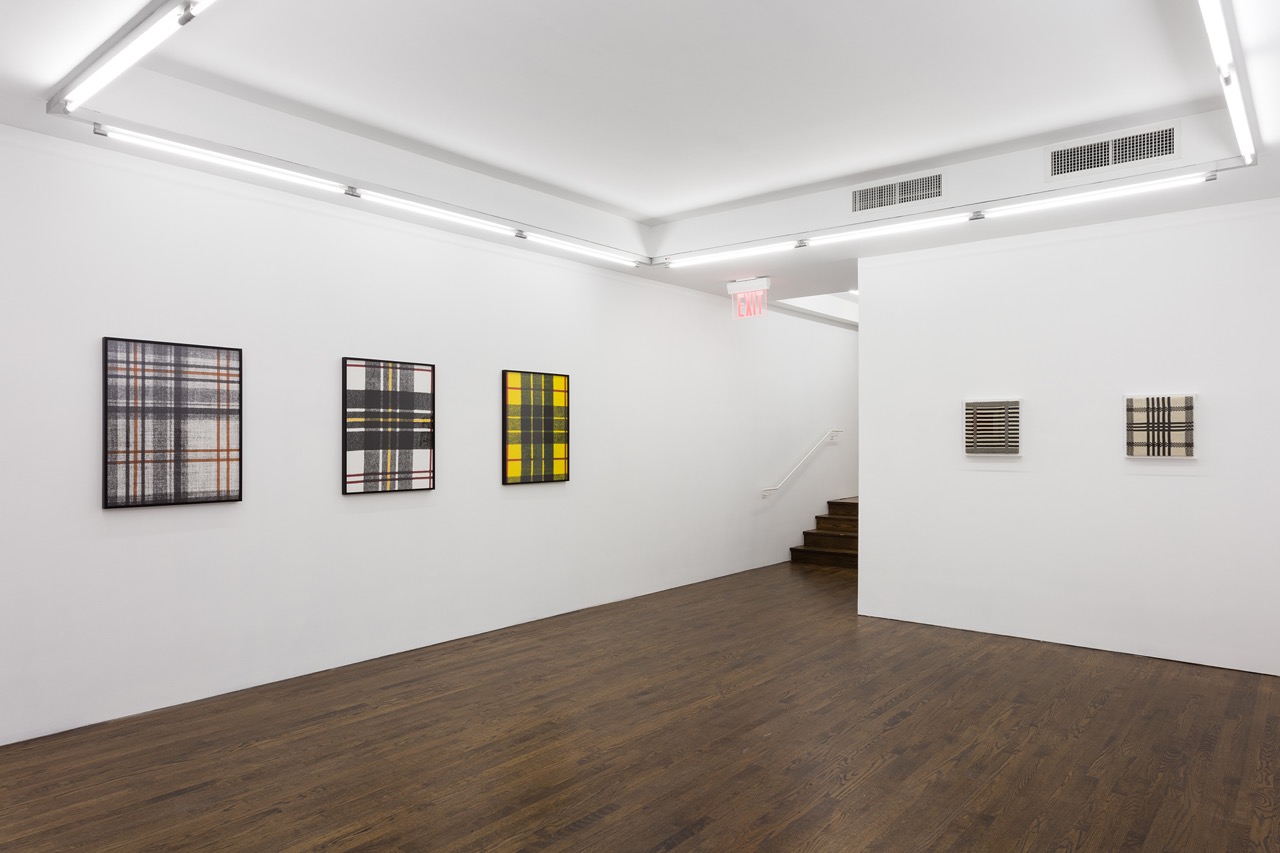 Early examples of Trockel’s woolen “knit paintings” from 1986 are adjacent to Charlesworth’s rephotographed pictures of Scottish tartan from the early 1980s; both artists utilize plaid for their feminist investigations of materiality and appropriation. Trockel’s pieces in particular—created on an automated knitting machine—illuminate how in this exhibition Cooke grasps textiles not just as the result of hands-on making, but also as the product of mechanical fabrication. As significant as Albers’s entrance into the world of weaving was in 1922—she took a weaving course in Weimar only because women were banned from her first choice, the glass workshop—Cooke emphasizes the moment in the late 1960s when she abandoned her loom and moved more securely into the world of corporate commissions. 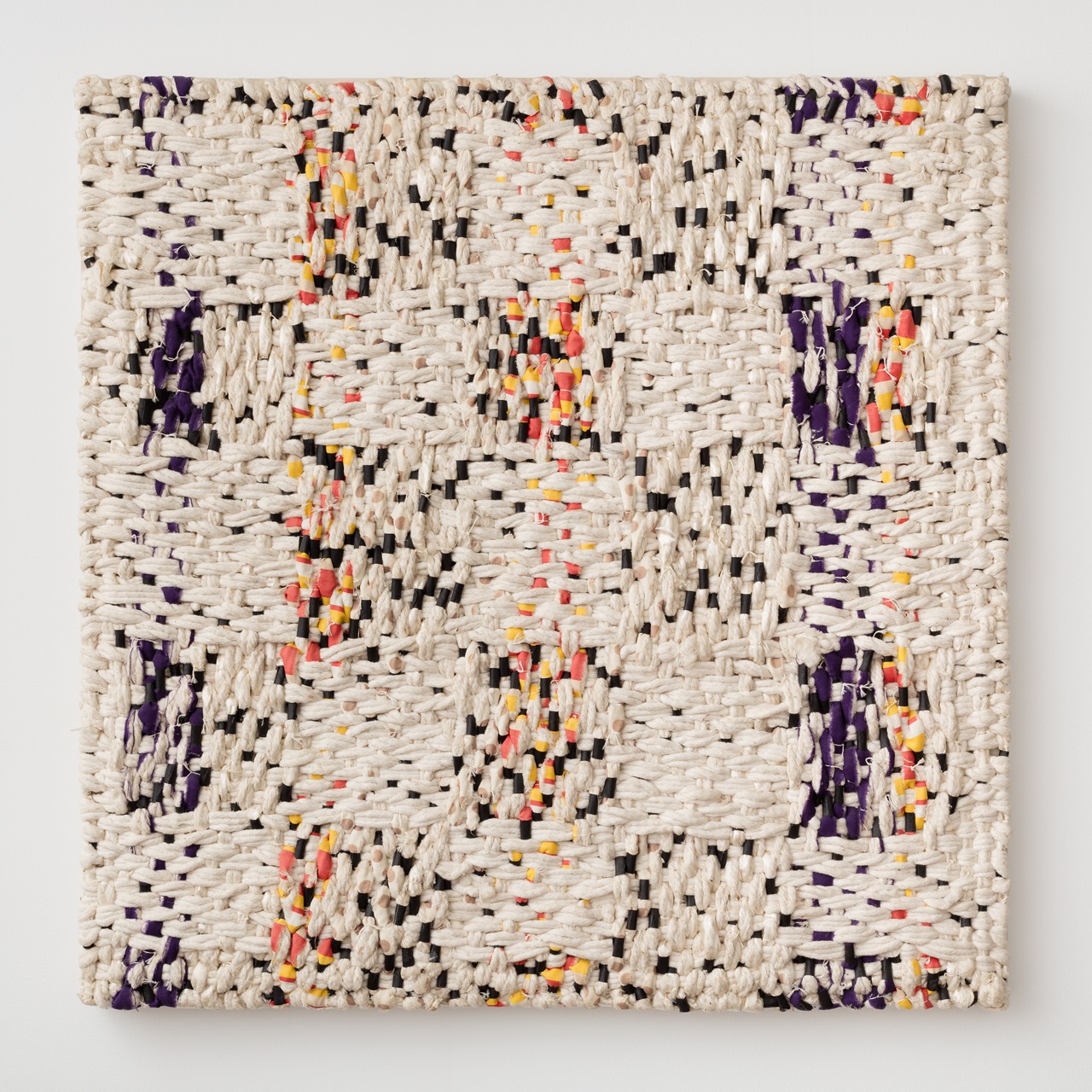 Rossbach—the lone man in the show, whose presence indicates that Albers’s importance is far from gender-specific—introduces a more gestural approach with two baskets (for him, a preeminent example of “textile art”) and one wall piece, Damask Waterfall, from 1977, whose thick, interlaced cords display a muscular sense of tautness, as they seem to pulse, stretch, release, and constrict across the lumpy, gridded surface. In fact, the endearing wonkiness of Rossbach’s work made me yearn for a little more attention to the visceral and resistant side of Albers’s project, one being embraced, and explicitly politicized, by artists of color such as Indira Allegra, who uses weaving as a metaphor for tension and gendered, racially marked bodies pulled by opposing forces. And Albers’s cross-cultural affinities, in particular her deep scholarship and lasting interest in Latin American indigenous forms and methods, might have been further elucidated with examples by contemporary artists whose work directly engages with some of these living histories, like Sarah Zapata. 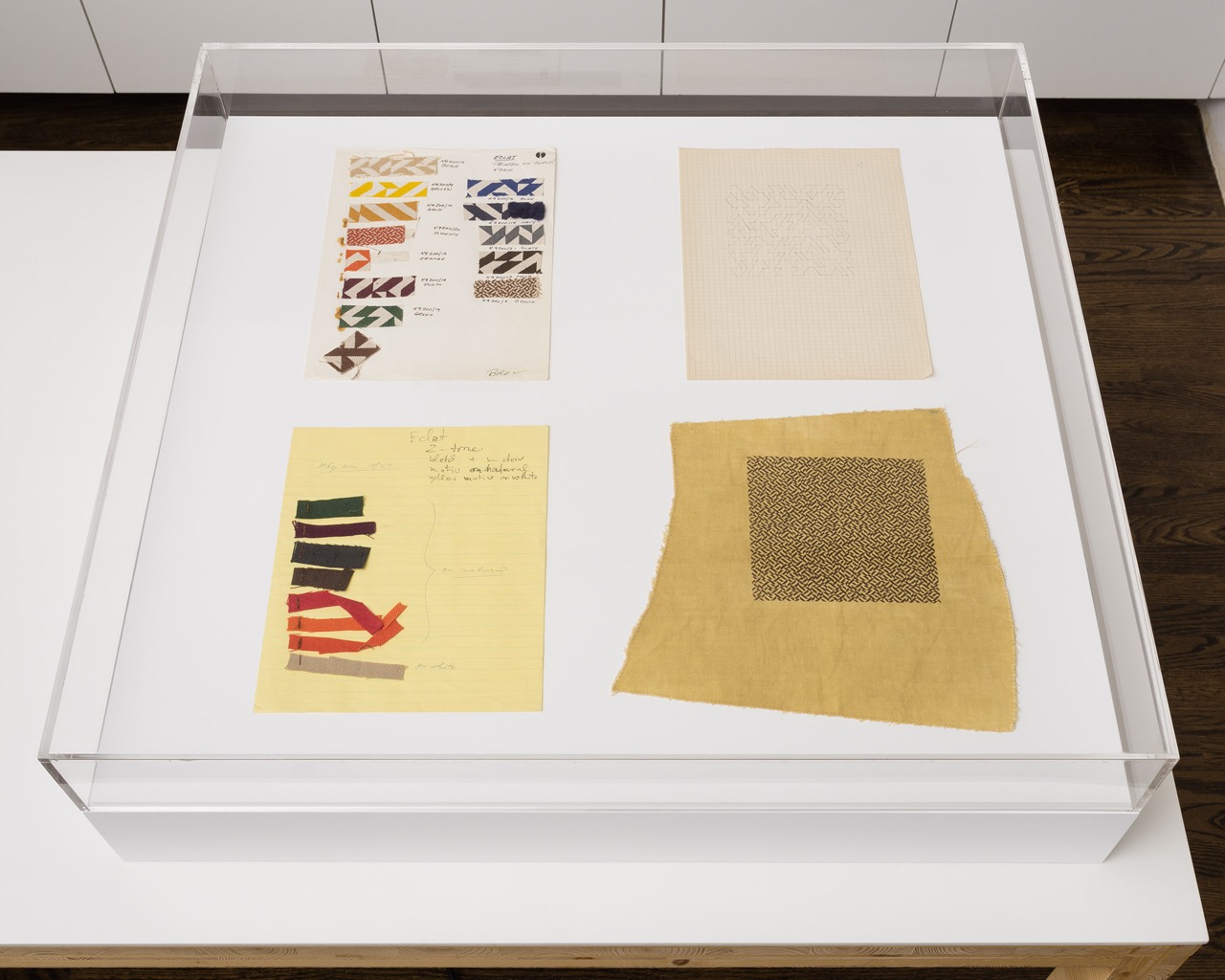 Maneuver includes a rich collection of Albers’s own work, registering her central place within (at least three) seemingly incompatible art-historical genealogies—the one focused on grids and geometric abstraction; the one that flirts with, or even dissolves into, functional design; and the one that celebrates the so-called women’s work of textile handicraft. Comprising prints, a vitrine containing swatches of fabric designed for Knoll Textiles stapled to paper with her scrawled notations—a nifty glimpse into the artist’s active process—and four lengths of her commercial fabric draped from a bar, the selection on view traces a single motif from sketch to sample to cloth. Various editions of On Weaving are available for browsing and are treated as visual artifacts in their own right, displayed on a narrow shelf in the front gallery. They have remarkably different book covers—one zooms in on a crisply uniform pattern, while another features meandering lines—and these distinctions serve as a reminder that Albers’s modernism has always had multiple strands. The works Cooke has assembled in this illuminating exhibition underscore this point, as they approach weaving as both a conceptual conceit and an embodied material practice.