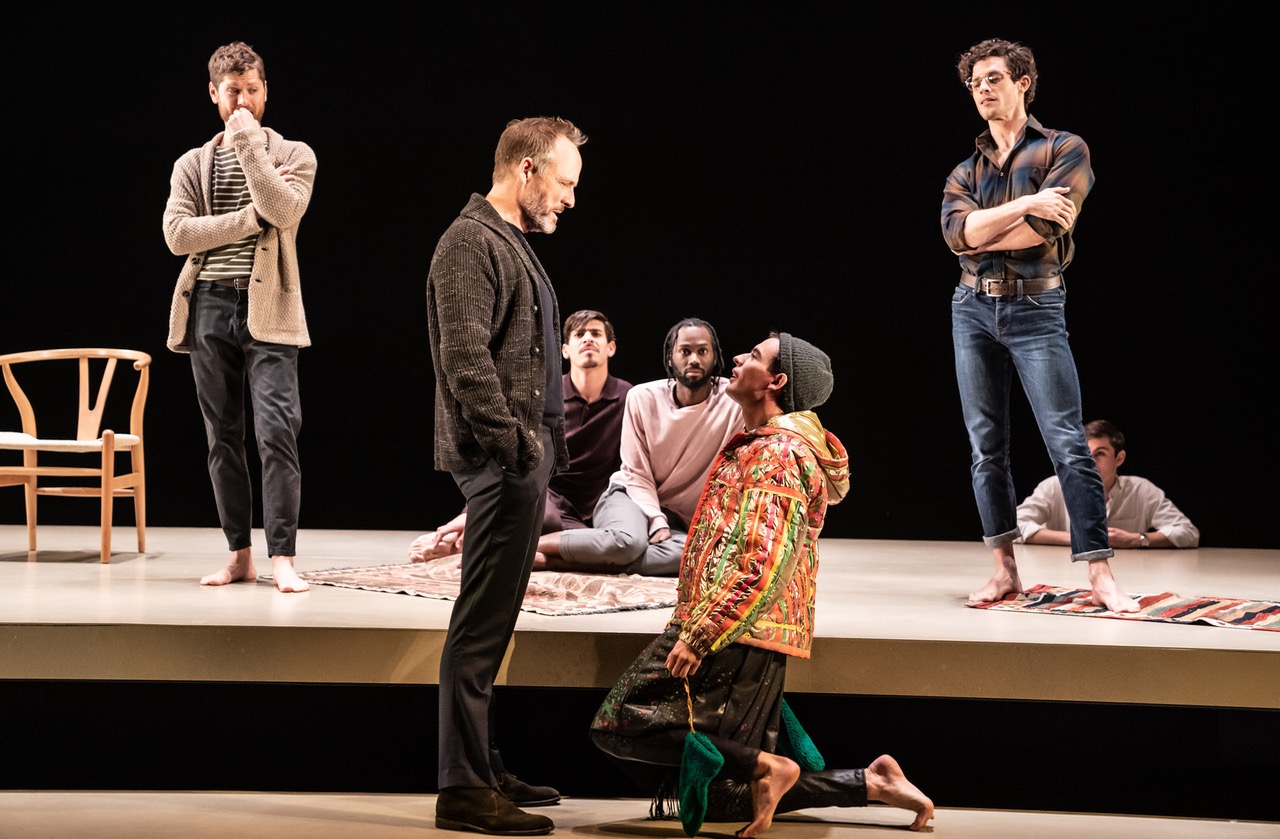 Matthew Lopez’s double-stuffed The Inheritance arrives on Broadway trailing banners of praise from England. London critics adored this distillation of E. M. Forster’s 1910 novel Howards End, which Lopez has turned into a transgenerational epic about gay life in New York at the start of the Trump era, with flashbacks to the height of the AIDS crisis. It’s a densely allusive, thickly plotted study of transmission: of high-art cultural values, real estate, pride in the LGBTQ community, and the deadly, unintentional passing on of a virus. Not since Tony Kushner’s Angels in America has a gay American drama staked out so much cultural ground, and at such length. Like Angels, The Inheritance unfolds in two plays and six acts, contains ghosts, complex conservatives, and flinty mothers atoning for alienated queer sons. Both works revolve around a couple’s messy breakup, and the forming of new alliances across class lines for a brighter future.

But whereas Angels expands outward in concentric circles of theatrical and conceptual audacity, The Inheritance orbits its constellation of mundane figures in increasingly tedious, constricted rings. Kushner summoned seraphim to crash through plaster and gibber in tongues, anoint prophets and watch Chernobyl burn. The Inheritance raises the tweedy persona of Forster from beyond the grave, incarnated with prim donnishness by Paul Hilton, who mingles cautiously with a handsome pack of Chelsea boys. Forster, called here by his middle name, Morgan, is Lopez’s guiding shade and chief narrator, a lifelong closeted man who nonetheless offers lessons in sincerity and connection for the Grindr age. One wonders if British reviewers were so chuffed by the centrality of an English literary mascot in this woe-is-America diptych that they burbled breathless encomia this sprawling piece didn’t really merit. 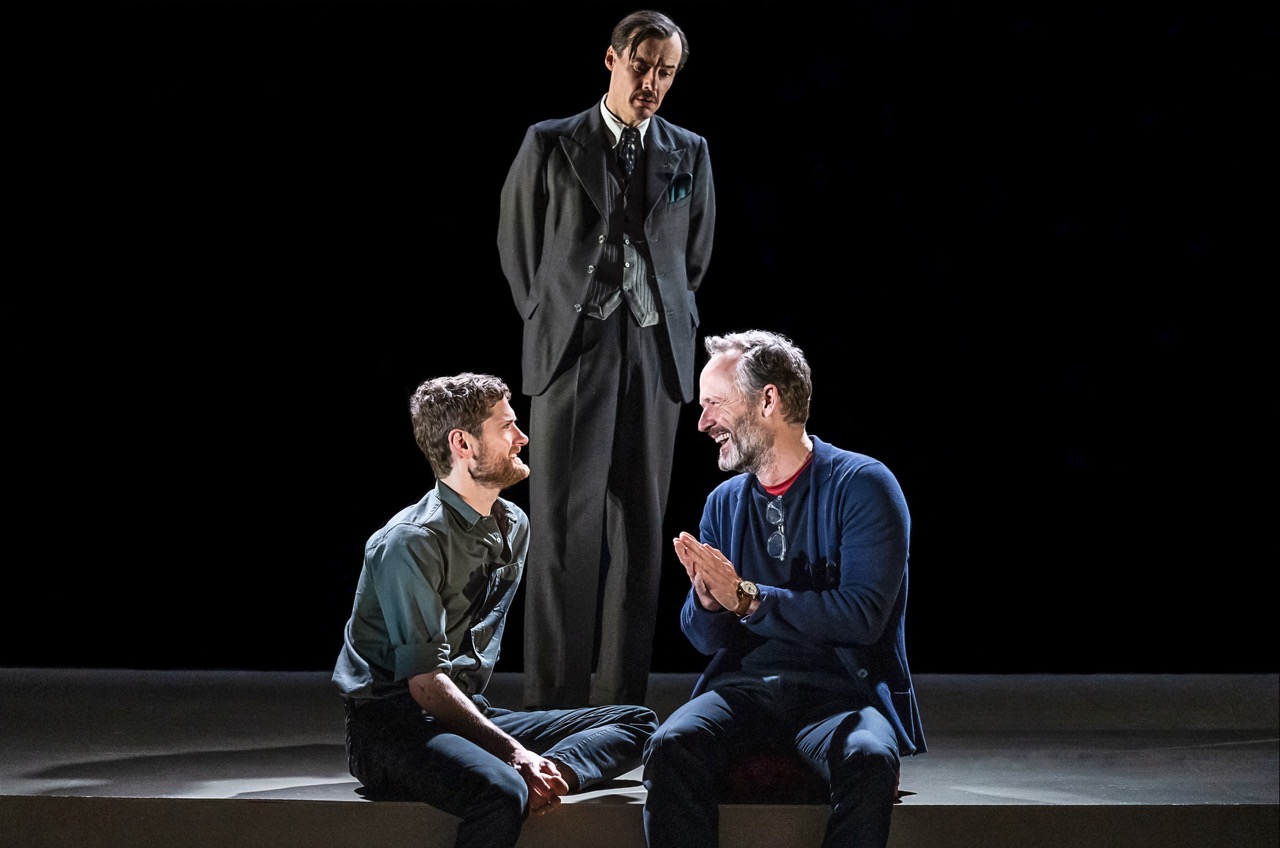 The Inheritance is three stacked genres—literary homage, AIDS melodrama, and relationship play—but its metafictional layer-cake gambit is not matched by the moral intelligence or prose pyrotechnics required to pull it off. First and most obviously, it’s a gay adaptation of Howards End, Forster’s touching tale of half-German sisters Margaret and Helen Schlegel, free-thinking humanists whose lives intertwine with that of wealthy, callous businessman Henry Wilcox and his tender-hearted wife, Ruth. Margaret and Ruth grow close; the dying Ruth wills Margaret her idyllic country estate, Howards End, but Henry conceals the fact—even after he becomes romantically involved with Margaret. Impulsive Helen, meanwhile, attaches herself to an impoverished, ill-educated clerk named Leonard Bast, her interest in him a muddle of attraction and charity. Sounds like Edwardian soap opera, but Forster’s dry, plummy wit elevates the plot above sentimental effects. “There’s magic and beauty in Forster,” Zadie Smith writes in her collection of essays Changing My Mind, “and weakness, and a little laziness, and some stupidity. He’s like us.” 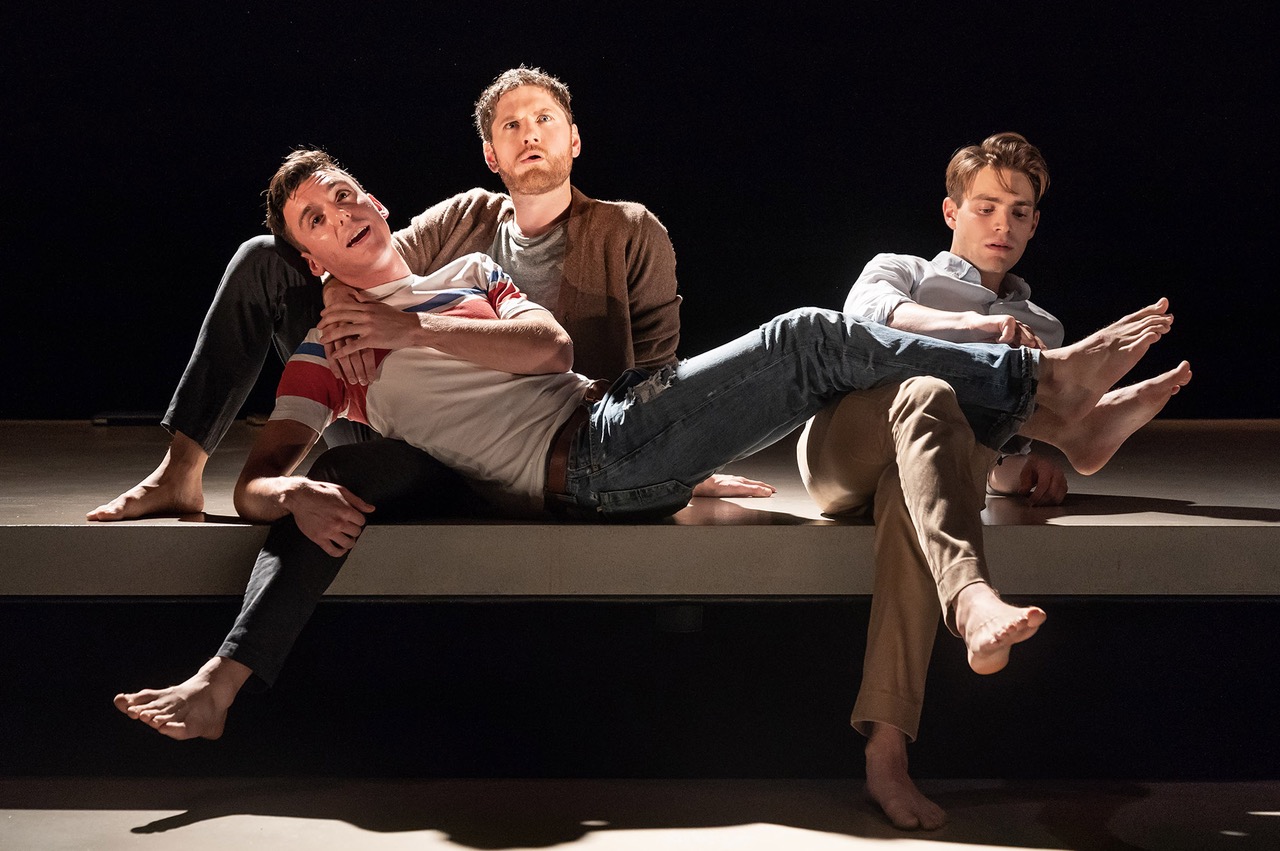 In Lopez’s hands, the Schlegels are now blandly decent Eric Glass (Kyle Soller), who works for a “social-justice entrepreneur,” and his boyfriend Toby Darling (Andrew Burnap), a hard-partying novelist; they live together in a rent-controlled Upper West Side apartment Eric inherited from his family. Eric throws lavish brunches, attended by friends played vibrantly, if broadly, by a supporting group of Young Men who double as other characters. Eric strikes up a warm acquaintance with an older fellow in his building, the sweet-natured Walter Poole (also Hilton), whose partner of thirty-six years, Henry Wilcox (John Benjamin Hickey), is a GOP-supporting real-estate developer. Walter and Henry own a grand colonial pile upstate where, we learn, Walter cared for scores of men dying at the height of the epidemic. Henry did not sanction Walter’s saintly hospice and, feeling their dream home tainted, signed the property over to Walter in disgust. After all these years, Walter says, he and Henry are still “sorting it out.”

There’s roughly five more hours of plot to cover: Eric loses his lease on the apartment; Toby abandons him while having success with a Broadway play; Walter dies and leaves the upstate house to Eric; Eric and Henry drift into love; and Toby takes up with Leo (Samuel H. Levine), a sensitive, homeless rent boy at risk of HIV. The grand Lois Smith makes an eleventh-hour appearance as a mother whose son spent his last days at Walter’s house. Part 1 ends with Eric’s first visit to the house, where he’s greeted by the ghosts of two dozen men who passed away. For those in the audience who survived the holocaust in the ’80s and early ’90s, this finale is a wrenching fantasia, and there was audible sniffling and sobbing in the audience when I attended. Those with dry eyes were, I suspect, feeling manipulated. 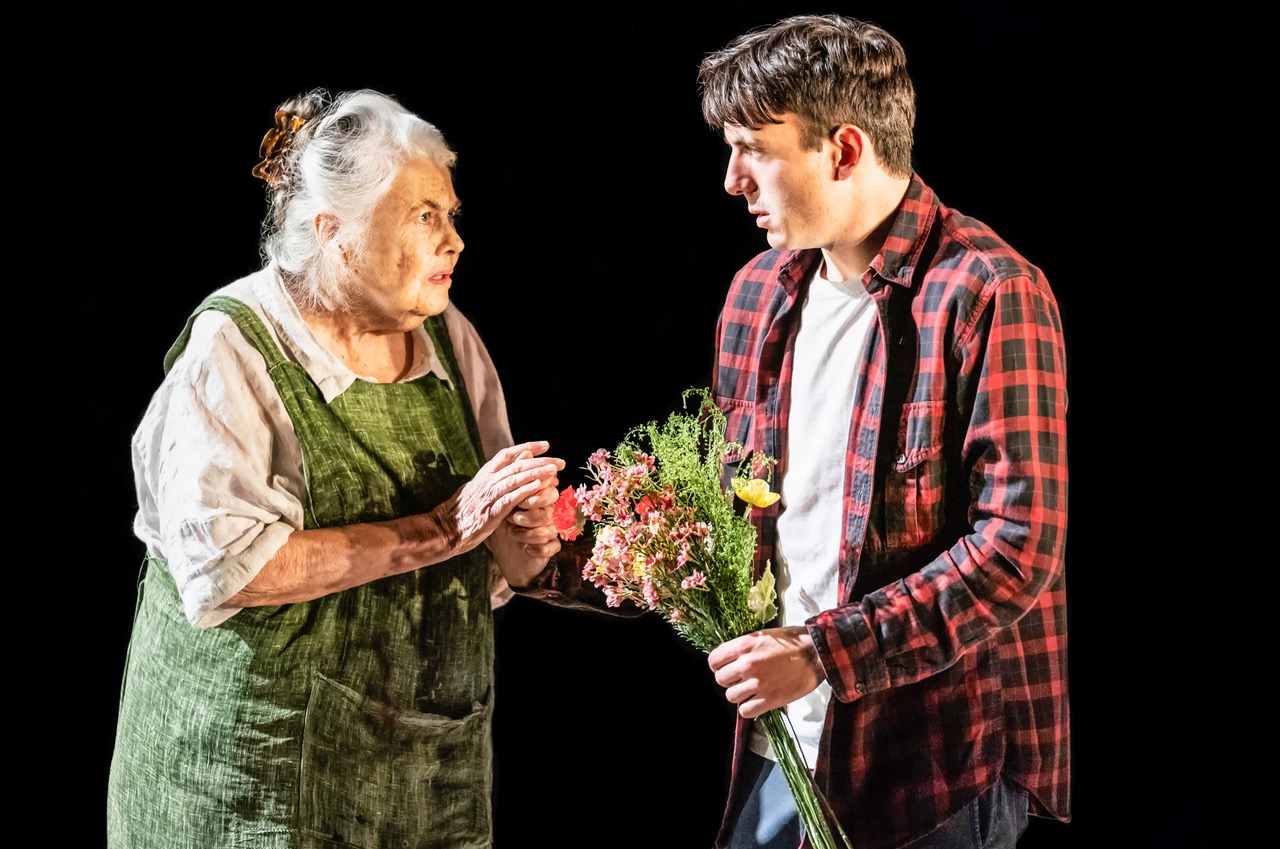 And what can one say about those words? There’s a brassy, gossipy confidence that sometimes carries you along, and Daldry’s brisk, musical pacing neatly distracts us from the inertia that accumulates from so much action being narrated rather than dramatized. Hickey and Hilton have the monopoly on craft and charisma, while the younger actors struggle, manically, to enliven their verbiage and rather stock roles.

For a piece obsessed with how culture and experience are transmitted, The Inheritance doesn’t even know its best delivery system. Should it be a play? It would be more dynamic as a classy/trashy HBO miniseries. Slashed in half, it could be a passable stage melodrama, a Fire Island August: Osage County. Or Lopez might just have assayed a book and spared us over six hours of uneven drama—authors can get away with much more mediocre prose in a book than the stage will tolerate. As it stands, the script is a swollen pastiche of self-indulgent direct address, hyperactive group cross-chatter, and Important Speeches that signpost themes instead of revealing personality. At a brunch, Eric launches into an exceedingly canned oration on queer continuity:

Human culture from time immemorial has been transmitted through stories. Think about the ancient epics: the Odyssey, the Mahabharata, oral histories that allowed cultures to understand themselves. . . . My grandmother, from as early as I can remember, taught me about the Shoah and her experiences as a refugee. And perhaps as a result of these intergenerational conversations, passed along in some cases for millennia, history is conveyed and cultures survived.

Who the heck talks like this, except Tony Kushner? He does it much better, and with jokes. 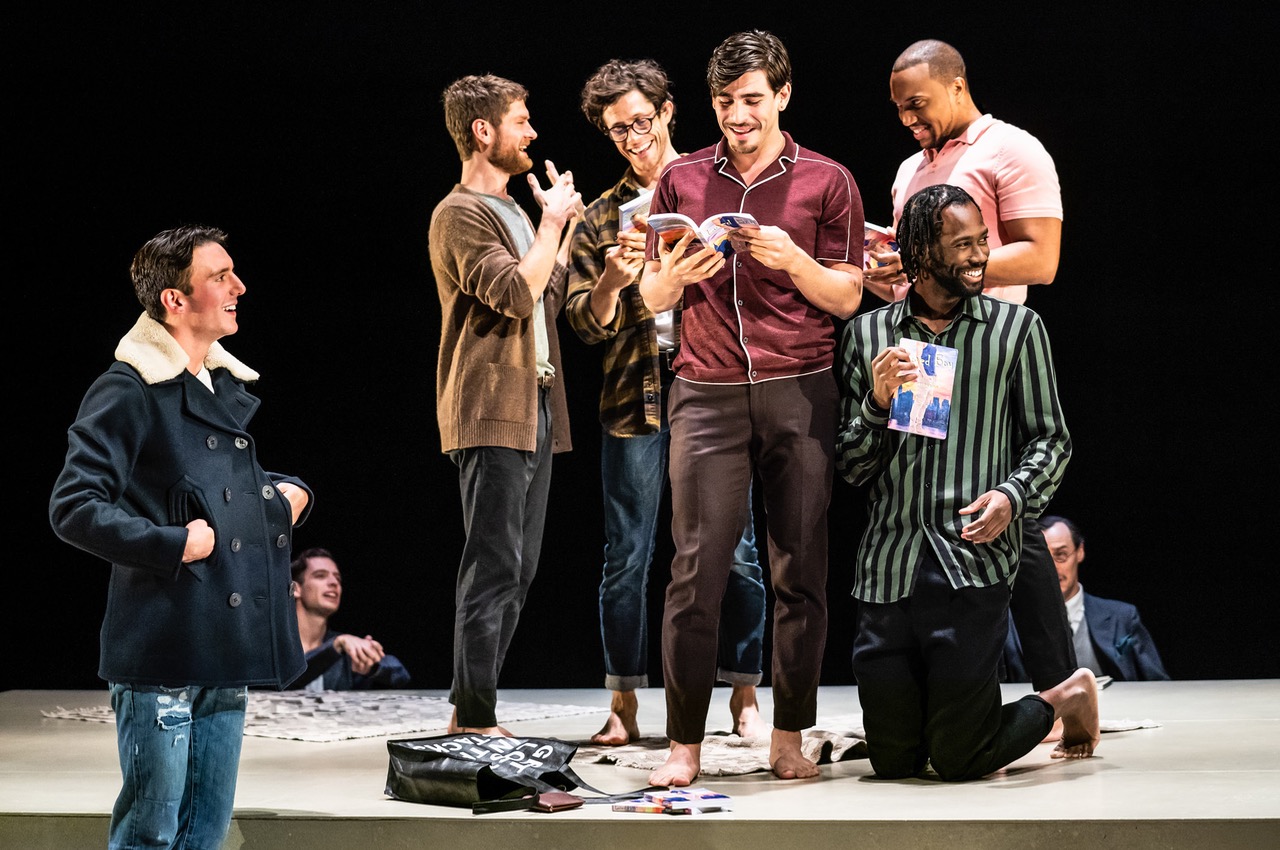 The play is fatally clotted with such novelistic pretension. There’s the slavish devotion to the Forster, Toby’s unconvincingly brilliant memoir, paperback classics namechecked at the Strand, and, finally, a tome that ex-hustler Leo writes. In Part 2’s self-congratulatory epilogue, Lopez’s characters, we are told, grow old and moderately wealthy, everyone agrees that Eric is a real mensch, and that book Leo finishes? It’s called (oh, God) The Inheritance. The hermetic, privileged circle tightens to a dot, and after nearly seven hours in the theater, we’re left with a play pointing eagerly and smugly at itself, waiting for a gold star. “Only connect . . .” is Forster’s oft-noted epigraph to Howards End. I think the idea is to connect with something outside yourself.