How do the costume designer’s fabulously imaginative creations hold up, absent the context of live performance? 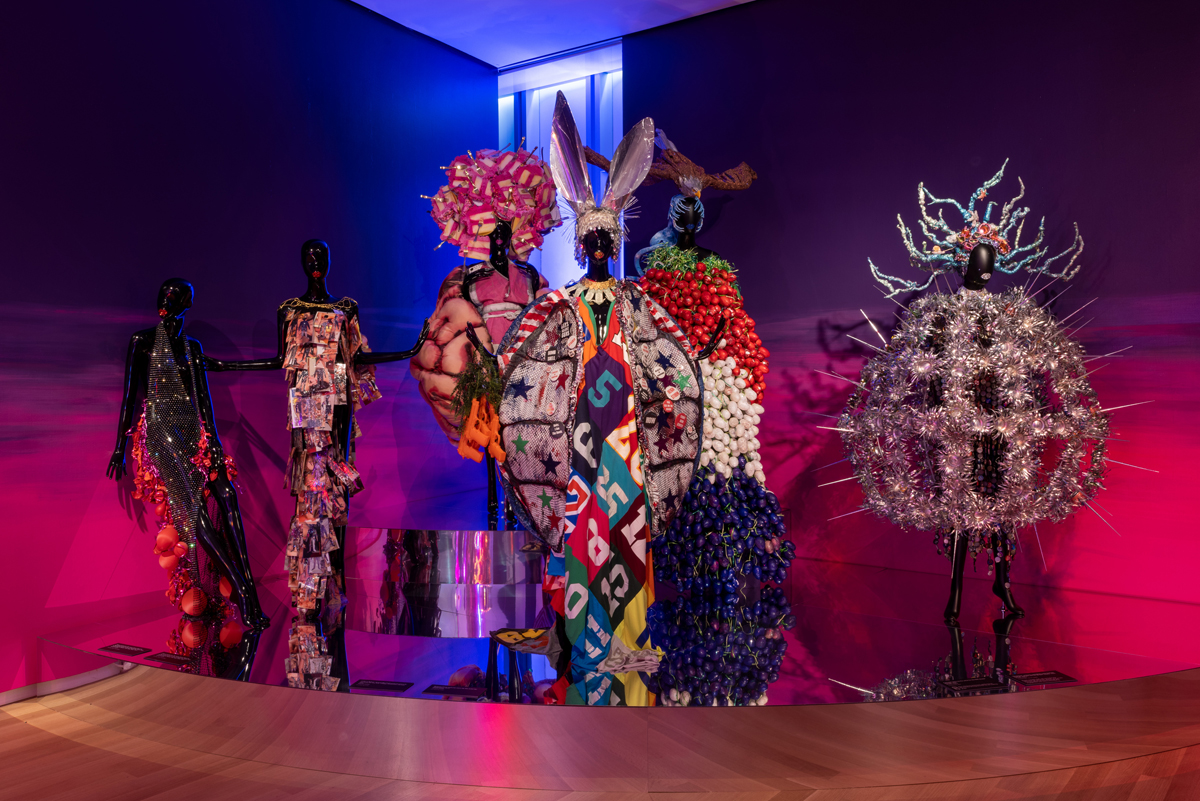 In the aftermath of the November 19 Club Q shooting—when, during a DJ set after a drag show, five people in Colorado were killed and twenty-five other injured by a heavily armed gunman before the attacker was subdued by an Army veteran, a Navy officer, and a trans woman in high heels—a lavish institutional presentation focusing on queer self-fashioning just hits different. A few more dispatches from the past weeks across the US: in Ohio, a drag story hour was canceled after far-right demonstrators swarmed outside the school building where it was to be held. Cops high-fived Proud Boys and militiamen sporting camo who inexplicably sang the Village People’s homo anthem “YMCA.” In Florida, neo-Nazis with guns and Christian white nationalists waving swastika flags protested outside a family-friendly LBGTQ+ fundraiser. In Oklahoma, a donut shop was firebombed after hosting an event that involved drag queens.

Targeted violent attacks on queer gatherings from New York to Tennessee to California dovetail with broader legislative initiatives to regulate drag as a form of expression, to outlaw queer nightlife, and to criminalize trans identities. The Republican-sponsored HB643 in Texas seeks to reclassify any establishment that hosts drag shows as a “sexually oriented business” (a category that includes strip clubs, porn theaters, and “adult motels”), defining drag as “a performance in which a performer exhibits a gender identity that is different than the performer’s gender assigned at birth using clothing, makeup, or other physical markers and sings, lip syncs, dances, or otherwise performs before an audience for entertainment.” 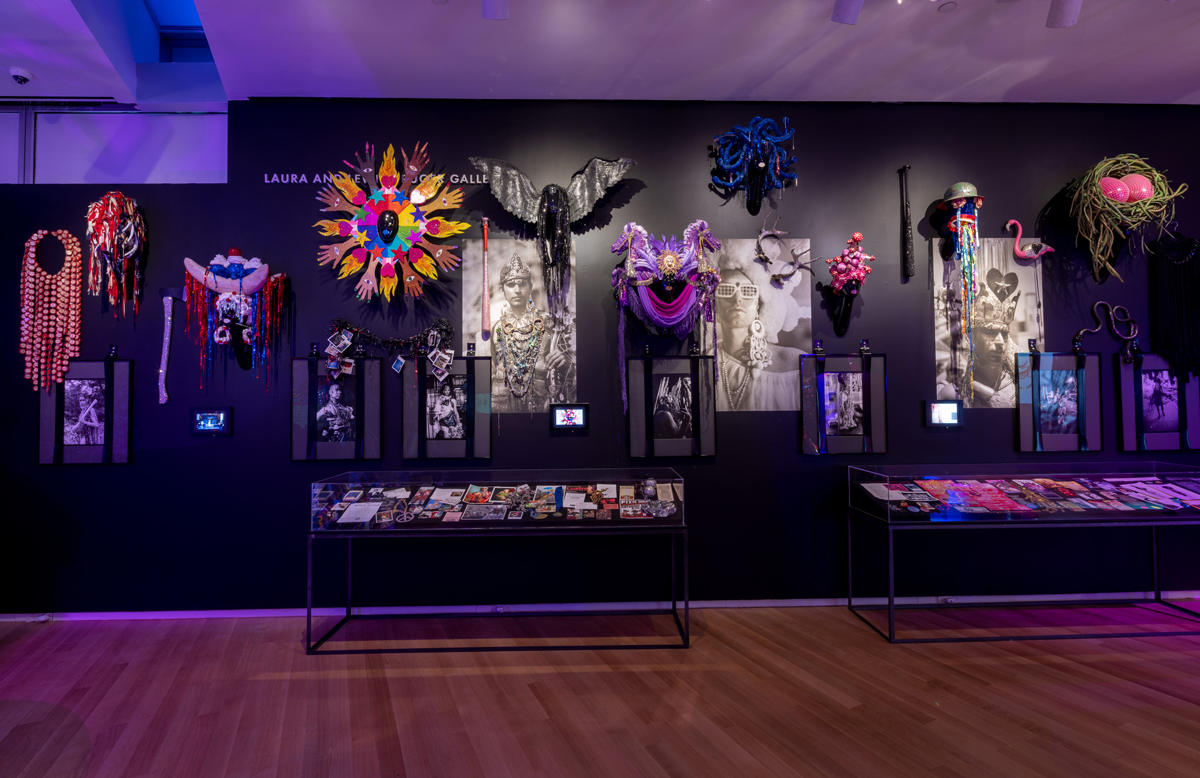 Within this context, the riotous display of queer “living sculpture” on view at Queer Maximalism × Machine Dazzle feels both timely and oddly out of sync with the current moment, because it is framed as a pure celebration of self-invention that lacks a sense of these escalating stakes around gendered garb. Organized with a surfeit of flair, this mid-career retrospective of Dazzle, a New York–based fifty-year-old designer-dancer-singer-maker-collaborator, demonstrates how, with his wildly imaginative and ecstatically eclectic creations, he has made an indelible mark on deep camp as a style. From a largely self-taught background creating outfits for an irreverent glitter-smeared troupe called the Dazzle Dancers, with whom he also performed, Dazzle (he takes his last name from this chosen family) has gone on to generate sets and costumes for some of the most widely lauded productions in recent theatrical history, including Taylor Mac’s A 24-Decade History of Popular Music (2016). He has worked with Mx. Justin Vivian Bond and other legends of queer performance, debuting his lewks in nightclubs, alternative art spaces, and on the streets. His list of venues alone signals his disregard for any kind of high/low demarcation, including the Night of a 1000 Stevies, the Coney Island Mermaid Parade, Exit Art, and the Guggenheim Museum, where he premiered Treasure, a memoirish synth-rock musical, in 2019. 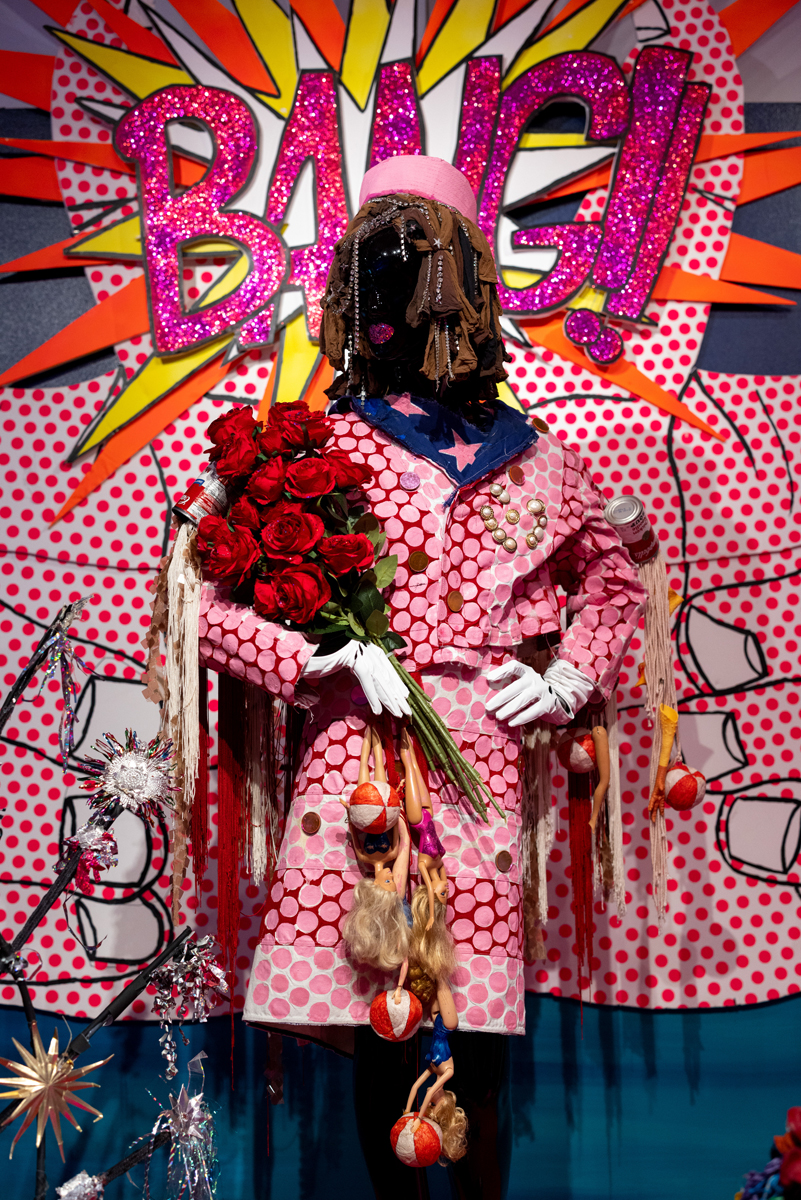 Alongside a small section of ephemera and archival materials from the 1990s on—Xeroxed club flyers, Polaroids, and posters—the Museum of Arts and Design show consists primarily of Dazzle’s performance props-cum-ensembles. The sheer range of materials incorporated in his garments is breathtaking; I cannot even begin to enumerate the diversity and volume of stuff. Mixing commercially purchased items such as beach balls, stuffed animals, and dime-store toys alongside yards of fabric, Dazzle builds on long legacies of queer reuse, handmade couture, and uncompromising excess modeled by the likes of Cyclona (Robert Legorreta), Giuseppe Campuzano, the Cockettes (and the Brazilian group they inspired, Dzi Croquettes), Stephen Varble, Leigh Bowery, and the Sisters of Perpetual Indulgence. Some but not all of these genealogies are gestured to in the accompanying catalog, smartly edited by curator Elissa Auther, which plumbs queer decor as a resource and opens onto the politics of what contributing author madison moore has termed the “fabulous.” 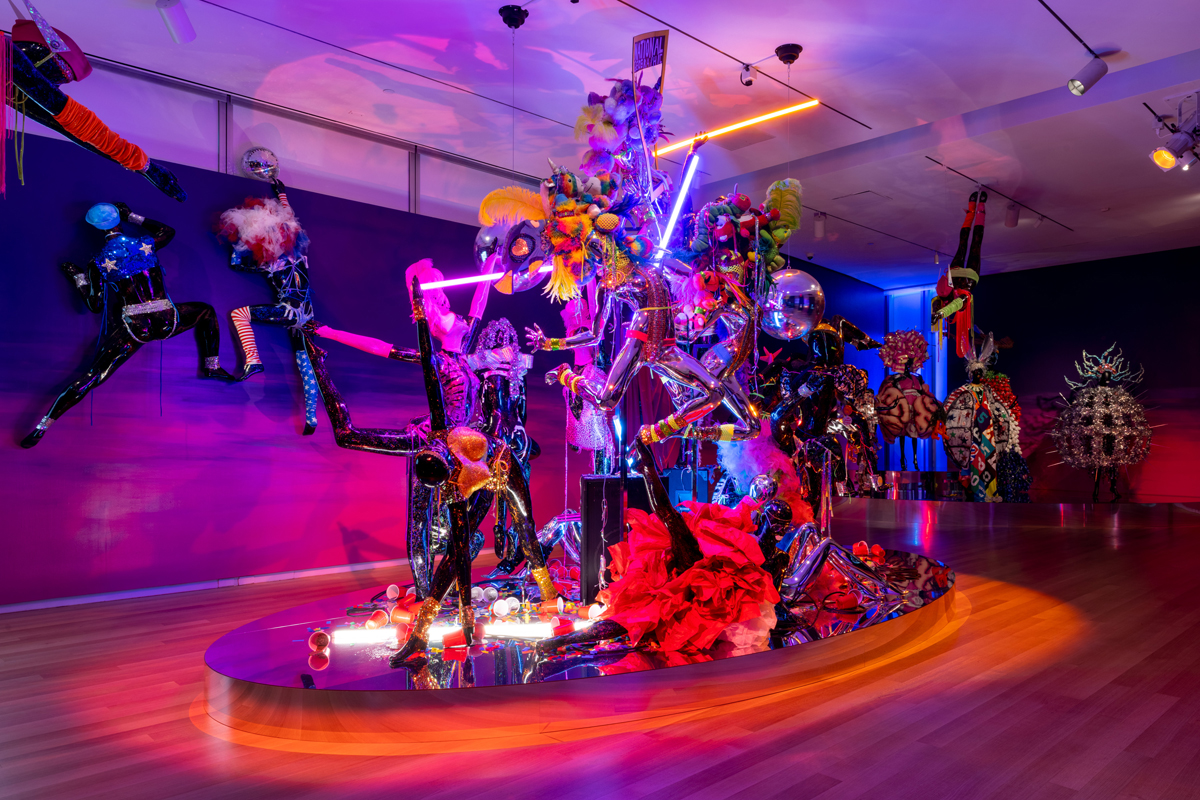 Queer Maximalism is careful to include a variety of Dazzle’s creations, but the attempt to match his more-on-more aesthetic with an equally dynamic presentation can detract from our ability to appreciate his work. At times, his craftsmanship is swallowed by the hectic installation, in particular by the barrage of colored lights that makes some of Dazzle’s intricacies hard to see. The mannequins made of shiny black plastic with pouty sparkling lips feel like a misguided attempt to mitigate the whiteness of most of the bodies they stand in for. Nor does the exhibition put to rest the major museological question that arises with shows of this nature: how much the live performance haunts the relics that remain after the lights go up. Those who have not seen how Mac or Bond or Dazzle inhabit these frocks will always be at a disadvantage compared to those who have witnessed their activation by the charismatic individuals who wore them. The inclusion of snippets of video cannot fully bridge the gap between the drastically different viewing conditions of the stage and the gallery. 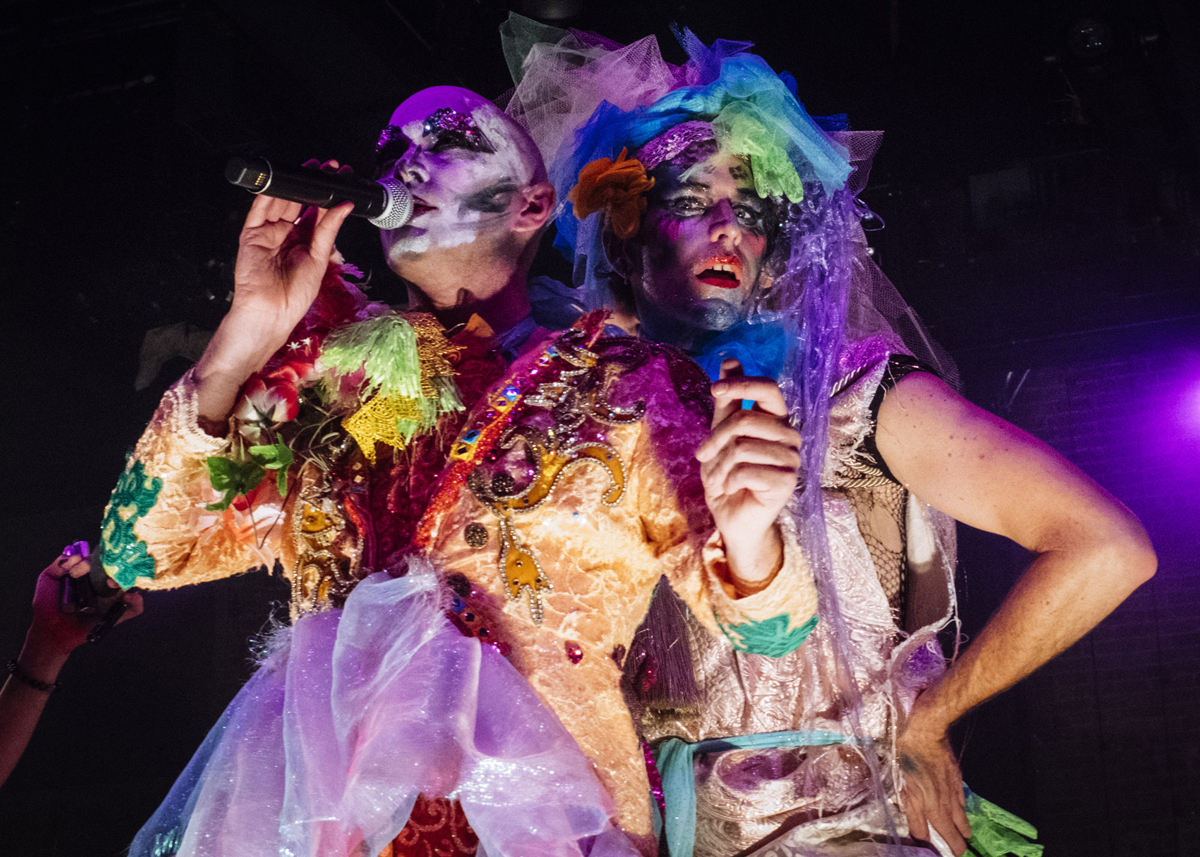 This mismatch between experiencing such pieces in motion during a performance and witnessing them as static, stand-alone objects, especially given the lack of vivifying and clarifying context, is most evident for some of the costumes from Mac’s 24-Decade History. For example, “Prairie Marmette” companion for DECADE 6: 1816—1826—Songs Popular with Children During the Indian Removal Act is a gown made from cloth printed with illustrations of prairie scenes, embellished with paint-spattered, dismembered plastic baby dolls. How one receives this invocation of the colonizing removal of Indigenous peoples from their lands is contingent on one’s own position, of course. Absent a larger discourse provided in the performance that might give texture to this garment, though, it comes off as trivializing and overly cheeky. Questions of taste are always about the policing of hierarchies, and transgressing boundaries of “bad taste” can be a humorous, and useful, queer tactic. Still, other choices, as in the costume for Decade 23: 1996–2006–Songs Popular with Radical Lesbians, meant to be a riot grrl / punk in combat boots and a white-skin breastplate with the word mother scrawled on the stomach, subsume too many disparate ideologies into a vision of perkily boobed whiteness. Call me a feminist killjoy (that’s me!), but I do not find that funny. 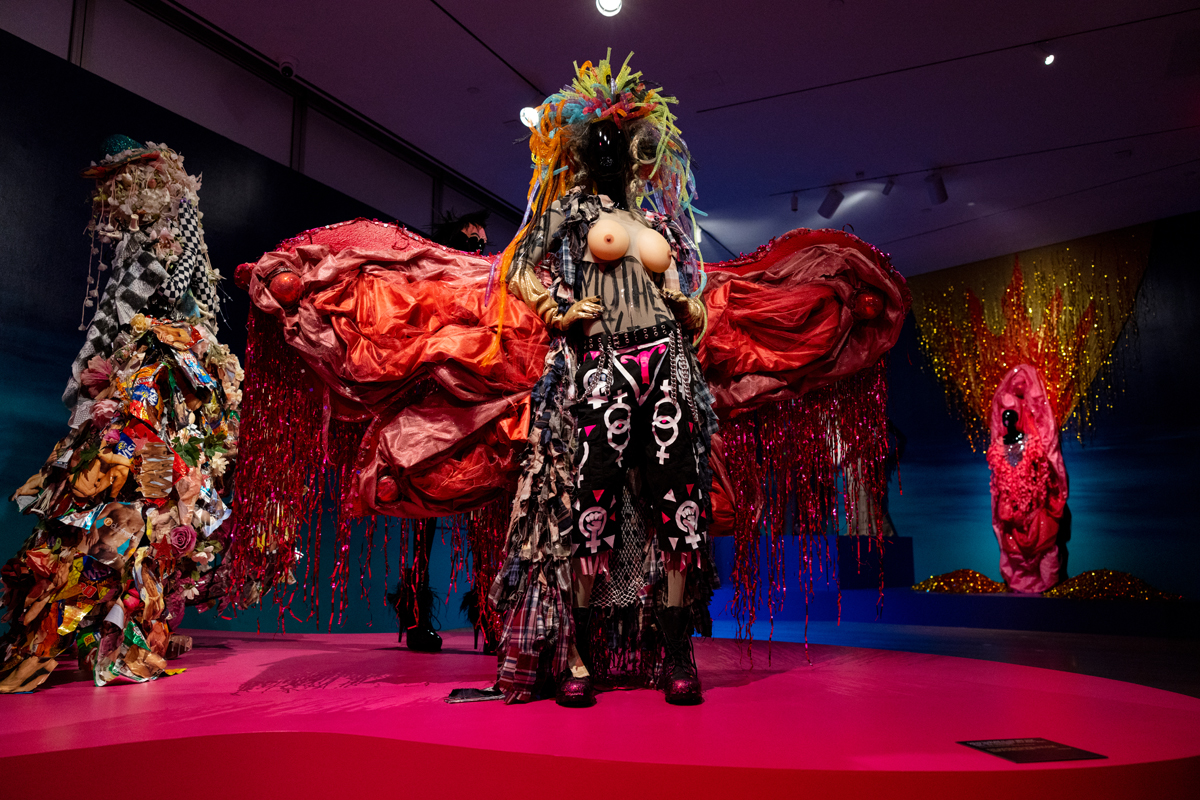 Despite—or possibly because of—the mainstreaming of oppositional drag and the RuPaulified commercialization of queer performance, homegrown terrorists have seized on queer costuming as a threat, rightly grasping how powder-pink bouffant wigs can act as a gateway drug, propelling those who don them toward greater liberation from repressive normative ideas of sexuality and the stultifications of the male/female binary. Along with precedents mentioned above, Dazzle’s work exists on a continuum with fierce legions of beaten-up queens and incarcerated trans activists who dare to dress differently. Long claimed by those across the gender spectrum as a laboratory for bodily autonomy and an arena for reinvention, queer costuming is also met with murderous hostilities. But the triumph inherent to the genre of the solo show minimizes the danger and risk undertaken by those who strap on heels as an act of survival. Although an uneven effort, Queer Maximalism nonetheless provokes necessary conversations about how queer and trans life can remain—in defiance of all the deathly hate—dazzling and free.