From mourning dress to the Bumster: 150 years of fashion at the
Met Costume Institute. 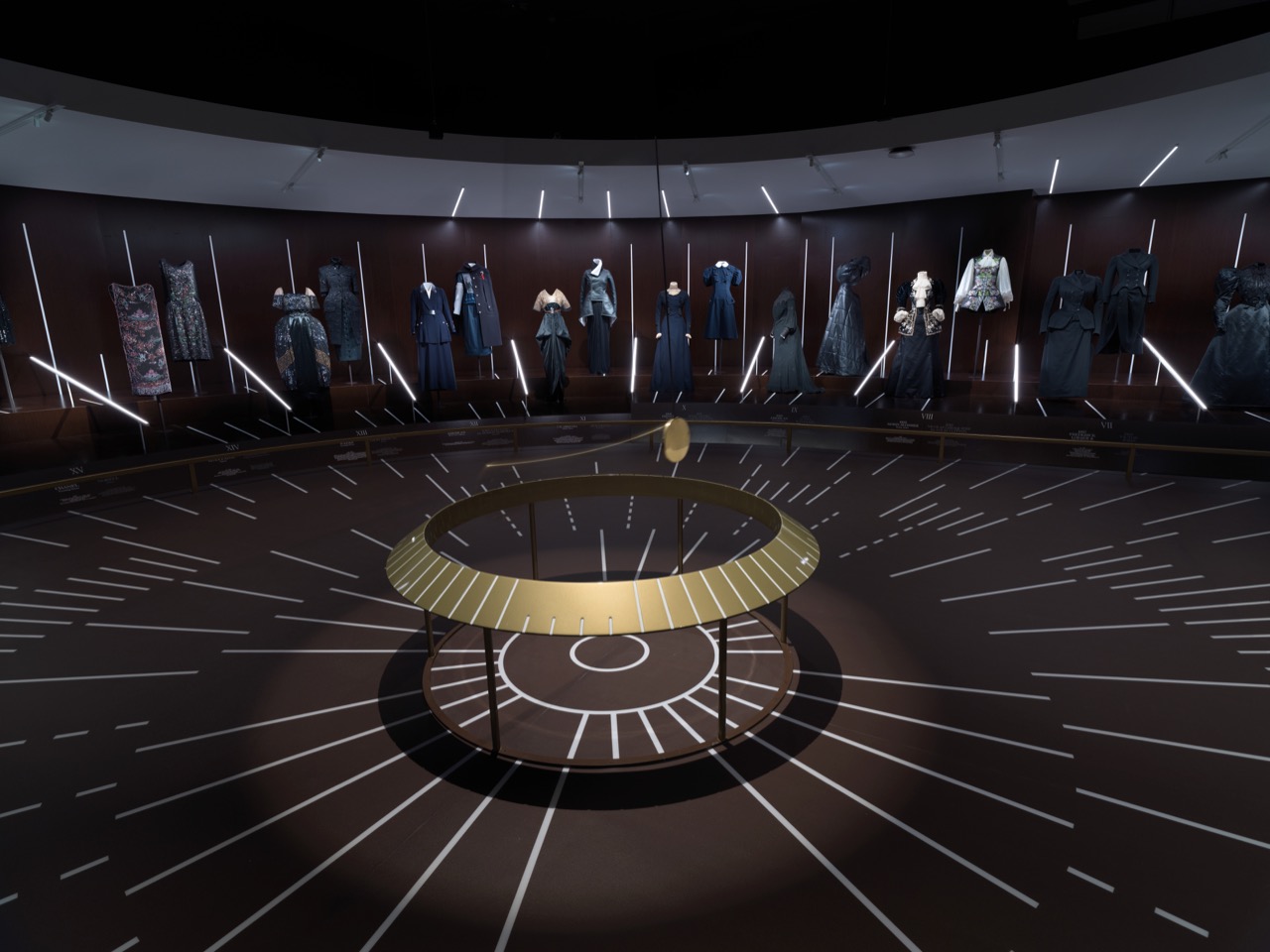 When Newland Archer, the hero of Edith Wharton’s The Age of Innocence, wants to be alone with Countess Ellen Olenska, whom he secretly loves, he suggests they meet at “the Art Museum—in the Park.” The Metropolitan Museum of Art was merely ten years old when, in 1880, it moved from midtown to Central Park; on their visit, the couple seeks out a deserted gallery filled with moldering antiquities. “Some day, I suppose, it will be a great Museum,” Newland sighs (with a wink from Wharton, who was writing almost forty years later, when the Met was well on its way to greatness). But for the moment, its art and artifacts pale beside the spectacle of her—“her long sealskin coat, her hands thrust in a small round muff, her veil drawn down like a transparent mask to the tip of her nose.” 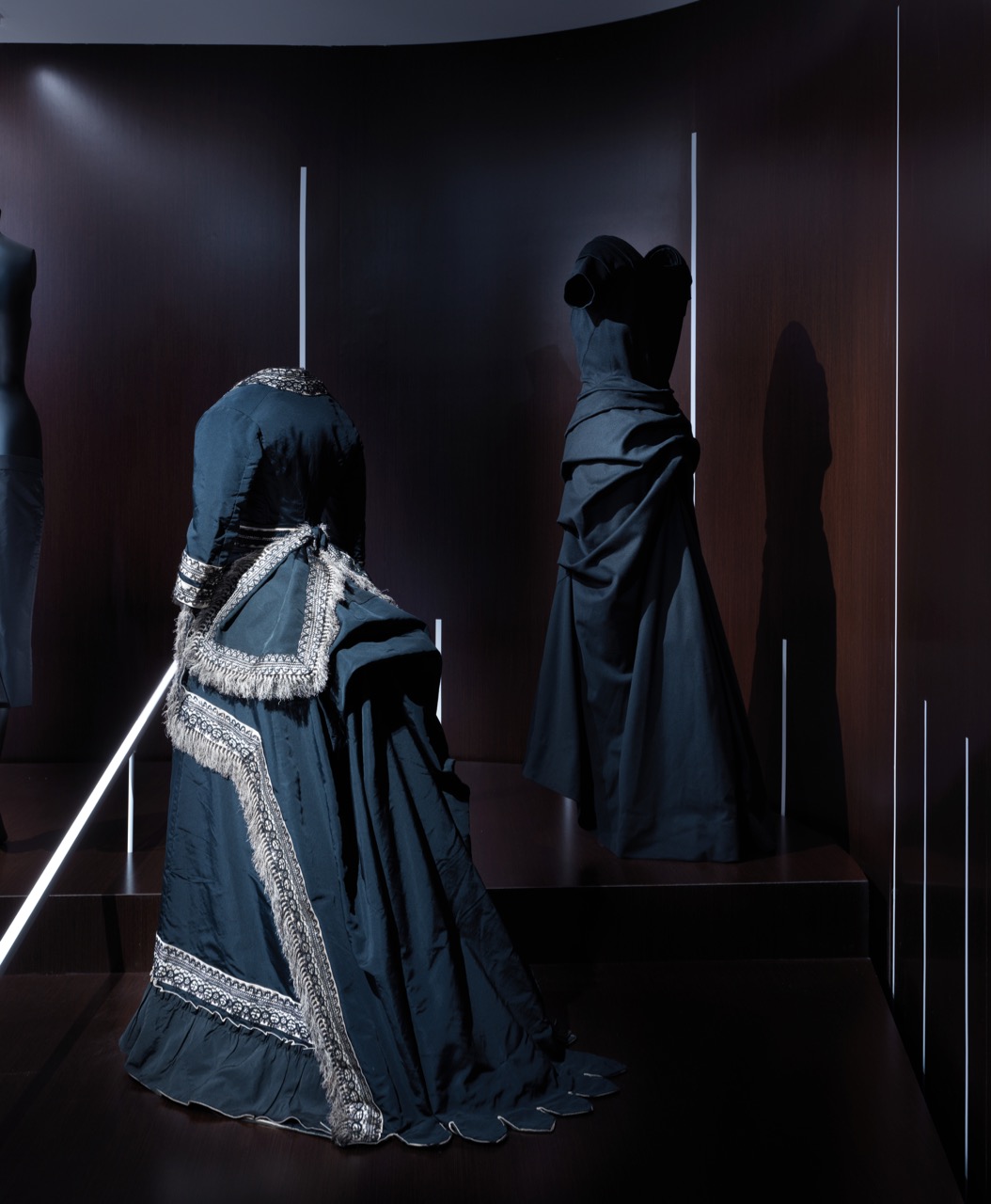 Visiting the museum today, Newland might be surprised to find the wardrobes of similarly stylish women on display for public contemplation. About Time: Fashion and Duration, the Met Costume Institute’s latest exhibition (one in a series of shows honoring the museum’s 150th anniversary) opens with an American mourning dress created in 1870, the year of the museum’s founding. The 124 garments that follow, arranged in two staggered rows that wind through two adjacent galleries, trace a century and a half of fashion as it both moves forward and circles back on itself repeatedly. 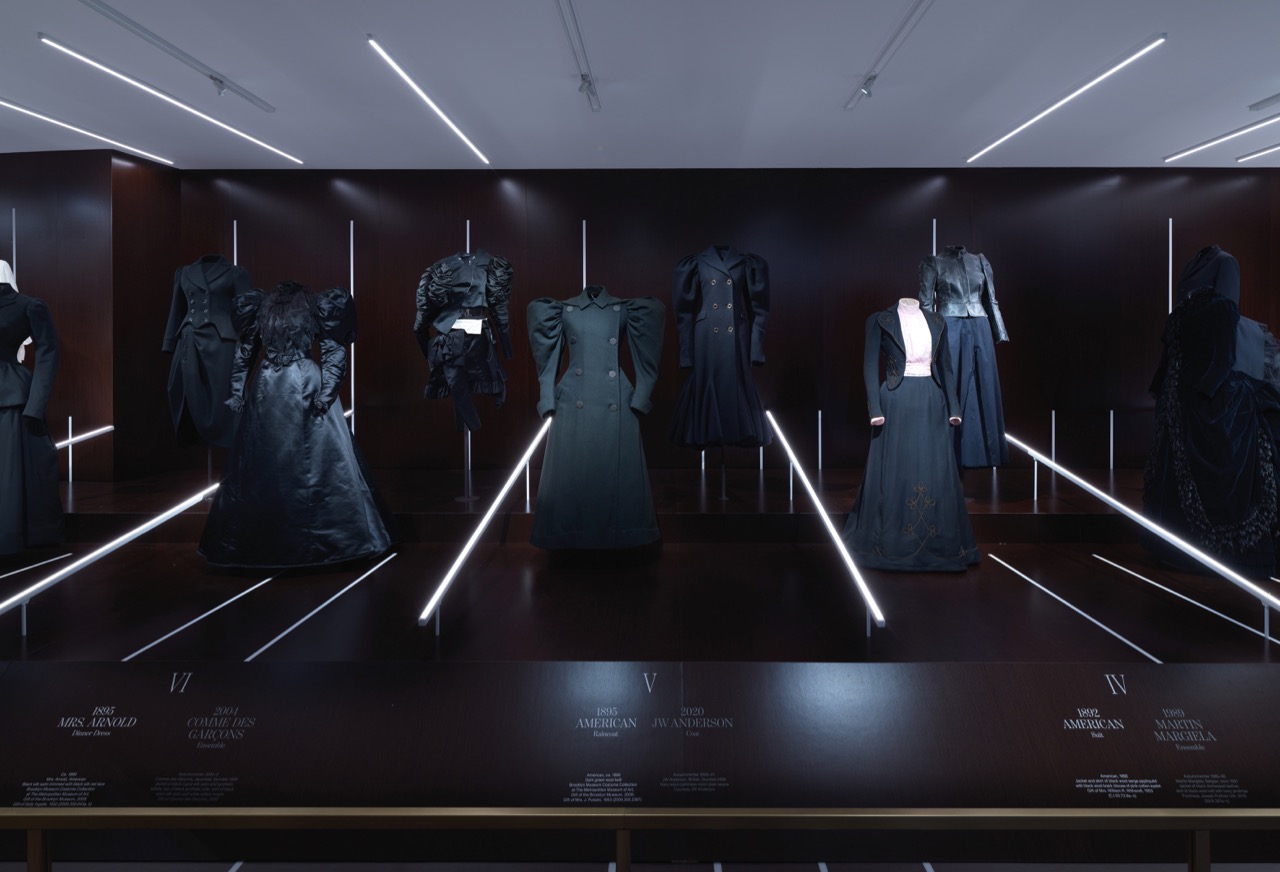 The clothing in the first row offers us a chronological progression of styles, from the swelling bosom of the Gibson Girl, to the flapper’s lean, androgynous allure, to the nipped-in-waist and padded hips of Christian Dior’s “New Look,” and on beyond Disco, Punk and Grunge. Fashion’s march of progress concludes with twenty-first-century experiments in otherworldly forms and materials, such as Iris van Herpen’s biomorphic evening gown created from undulating rolls of plastic polymer. 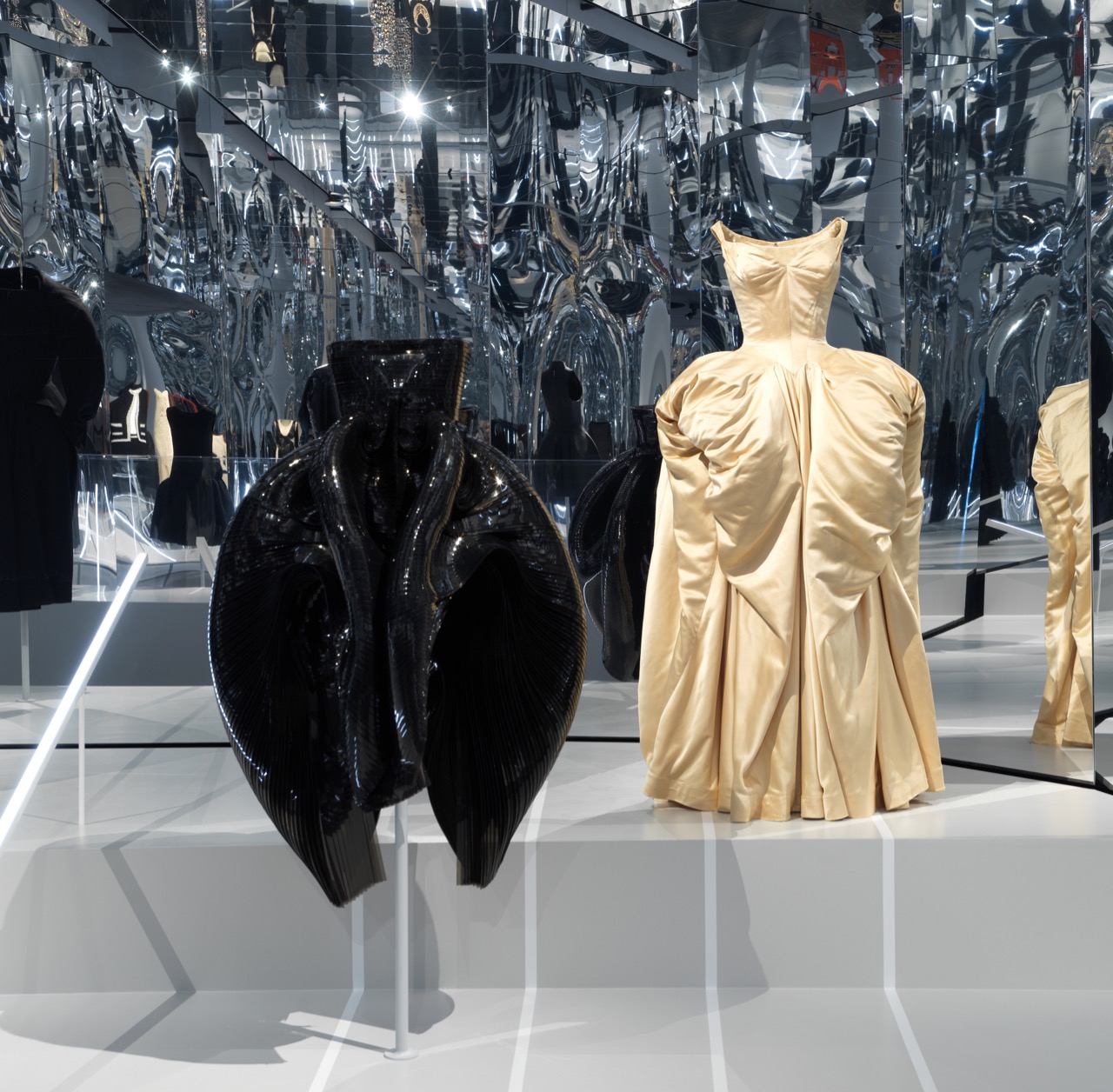 At the same time, paired with each of these garments and arranged behind them are items of clothing made many years prior to or long after those pieces, but which echo them in silhouette, pattern, or embellishment. Sometimes these second garments are homages, coming perilously close to copies. See designer Norman Norell’s updating, for autumn/winter 1965–66, of a little black dress from the 1920s by Gabrielle Chanel—a sequined evening number, festooned with black sequined camellias at the shoulder and hip. With slight alterations in proportion and adornment—a shorter hemline, narrower shoulder straps, a layer of fringe—Norell’s sleekly modern shift appears ready to take on the youthquake of the 1960s. 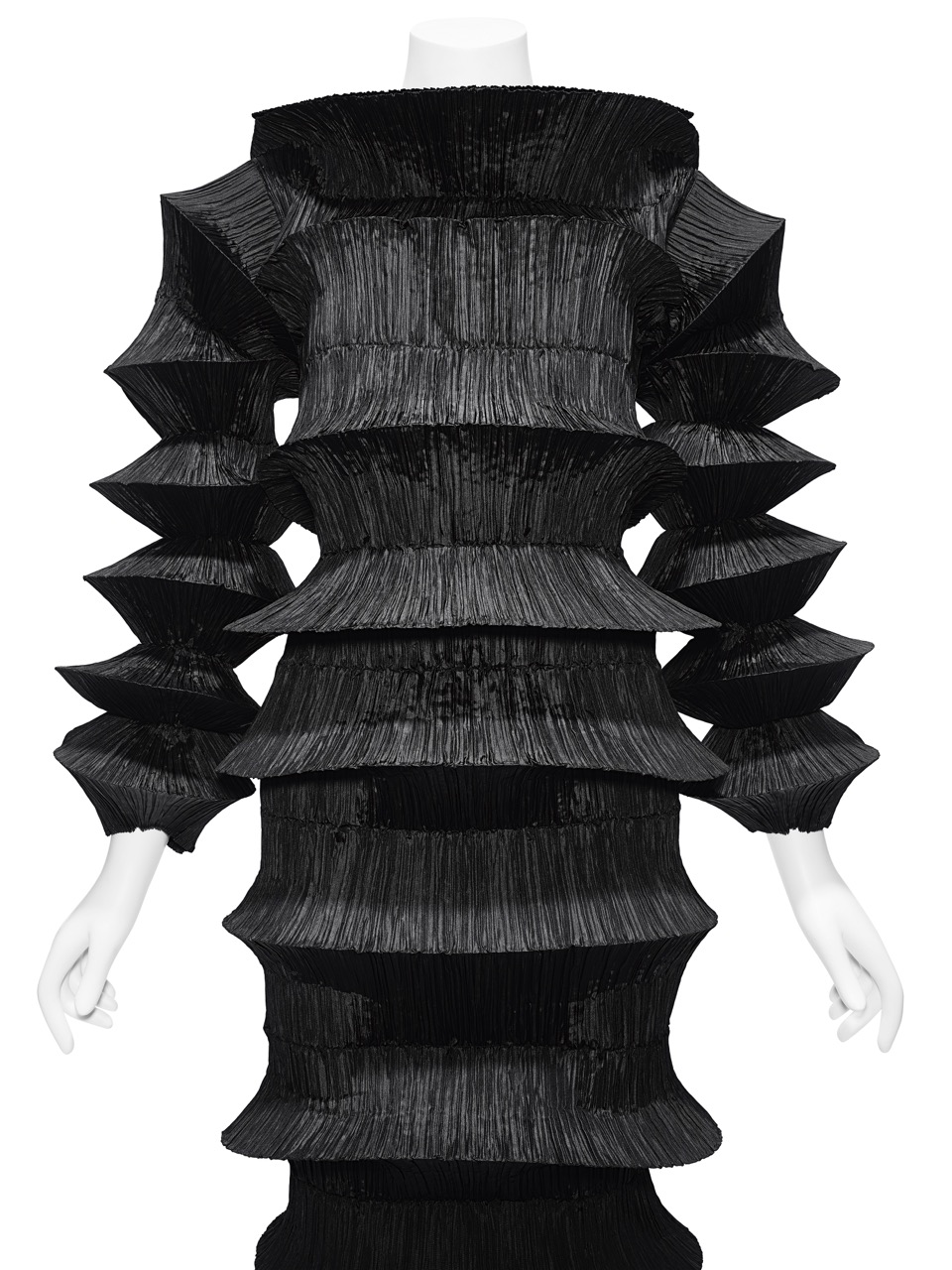 At other times the combinations are related through the mysteries of technique. Japanese designer Issey Miyake’s playfully futuristic “Flying Saucer” dress (spring/summer 1994), constructed with tiny, ironed-in pleats and ringed round with accordion-like folds, finds an early-twentieth-century ancestor in the finely pleated, columnar silk evening gowns of Mariano Fortuny y Madrazo. Fortuny’s evening gowns, on the other hand (which, when they flattened, had to be sent back to the Spanish designer’s palazzo in Venice for re-pleating) were themselves inspired by ancient Greek chitons. 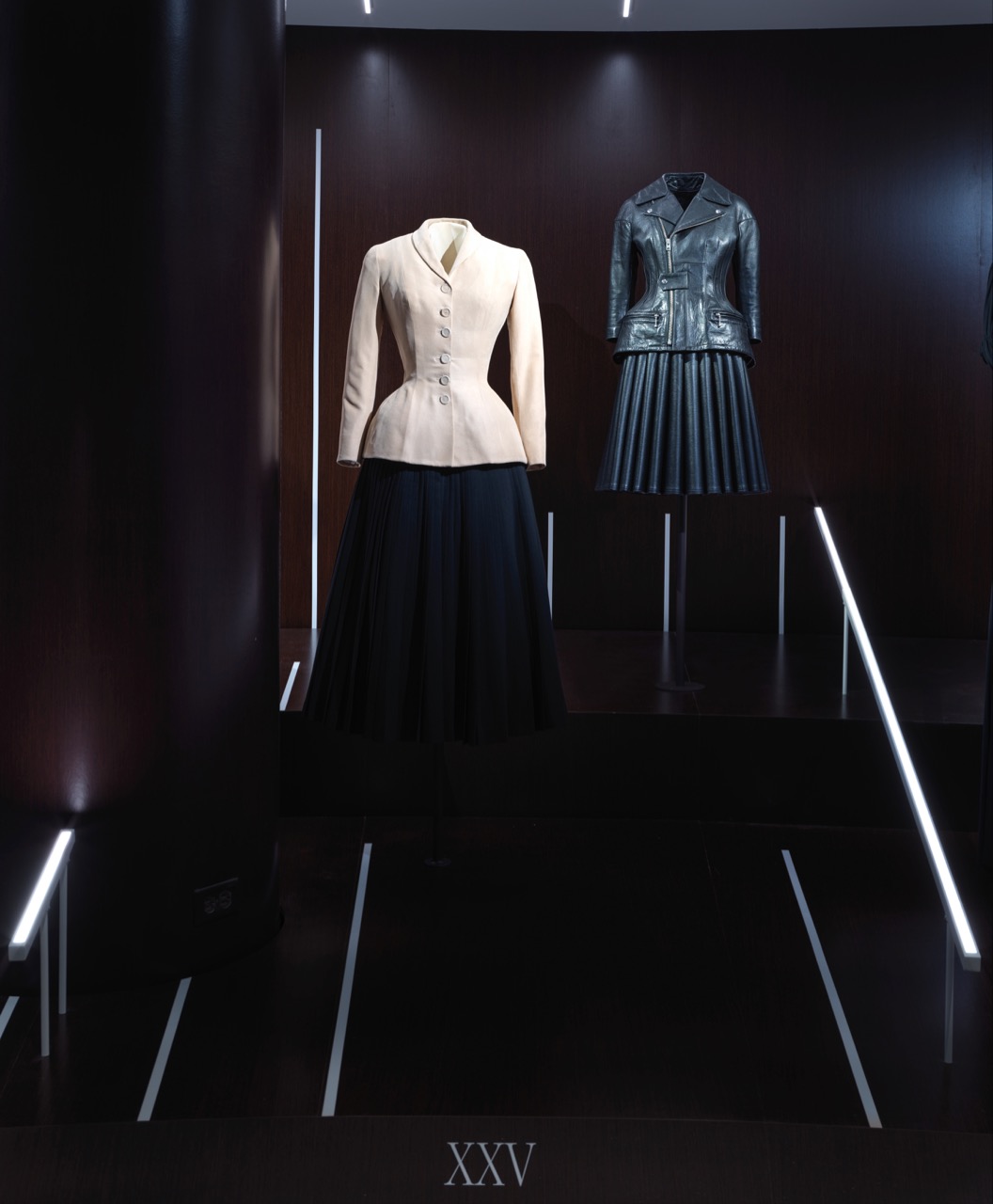 And sometimes the pairings seem playfully subversive. What would Christian Dior make of Junya Watanabe’s reimagining of his classic “Bar” suit, for example, as a black leather motorcycle jacket with a cinched-in waist, layered over a polyurethane pleated skirt?

More provocative still is the pairing of an American afternoon dress, circa 1877—a sober, black silk faille garment that hugs the wearer’s narrow figure and tiny, corseted waist with its formfitting princess seams, a cascade of puffs and ruffles highlighting her backside—with Alexander McQueen’s notorious “Bumster” skirt (autumn/winter 1995–96). Both styles elongate the torso, but the “Bumster” skirt—also of black silk faille, but cut low enough on the hips to reveal a substantial slice of butt cleavage—would hardly have passed muster in a Victorian salon. The eroticized rear end, in each of these garments, is achieved through opposite means. What remains, in each instance, is the body, and the way the clothes work to highlight, expose, or camouflage its charms. 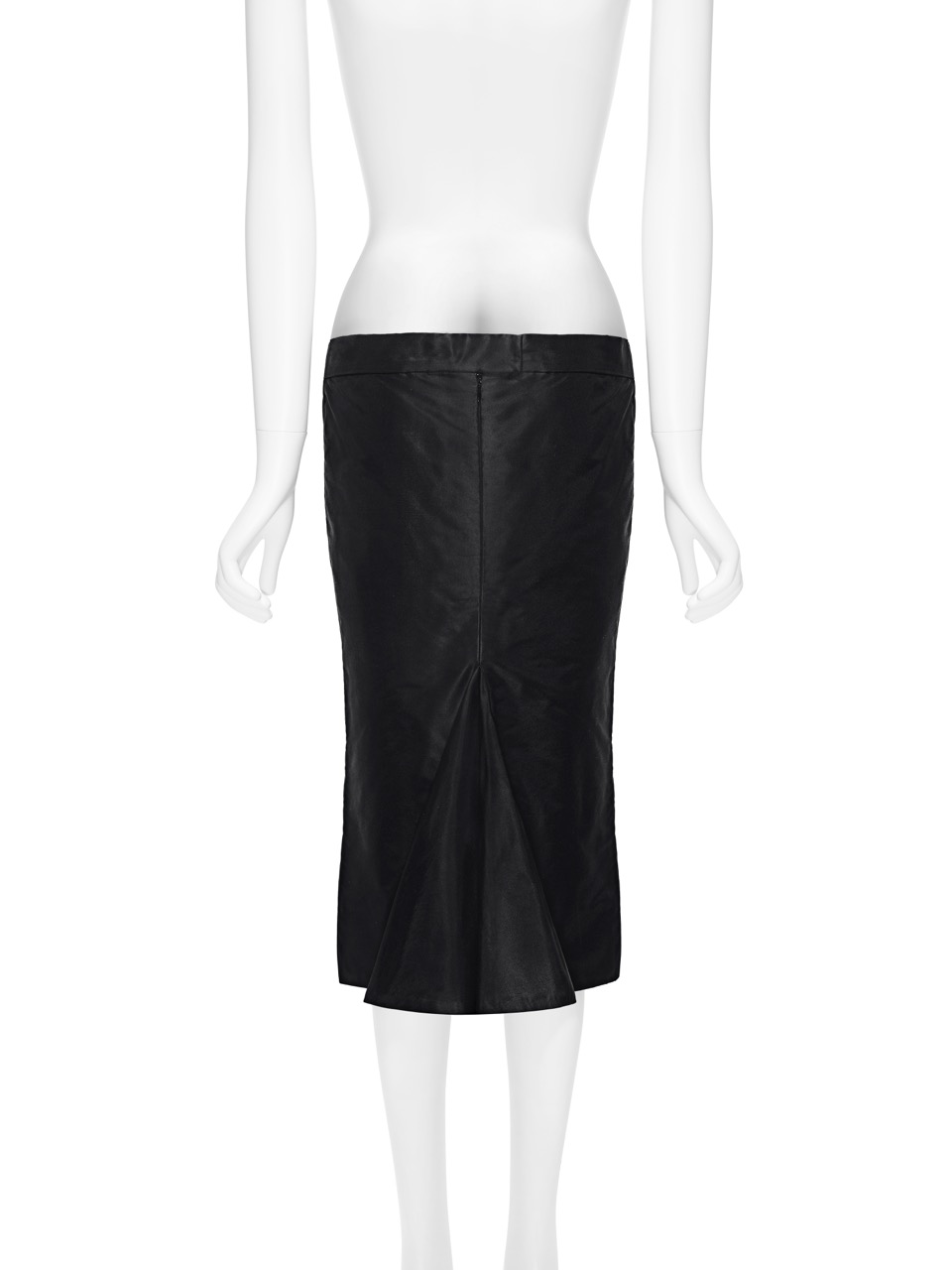 “A good dress has a very long life,” the Paris- and New York–based couturier Mainbocher (whose specialty was conservative luxury) opined, “since it contains some past, much present and a little future.” One might wish to tamper with Mainbocher’s recipe for sartorial success—adding a dash more future, for example—but About Time goes a long way toward proving his argument true.

Fashion, with its cult of evanescence and constant upheavals, is never entirely new. It bears the imprint of the past and is imbued with future possibilities. A turned-up collar, a handkerchief hem, impudent zippers, silk cut on the bias and encircling narrow hips—these various details of dress ricochet through time, calling forth the memory of long-forgotten nights, teasing us with the promise of future liberation.

About Time was originally scheduled to open last May, and its delay is part of a shift in time we have all come to experience under the pandemic, when the days blur into one another and special occasions risk losing their meaning. There was no Met Gala, combining extremes of glamour and absurdity, to open the exhibition on the first Monday in May, as in years past. Instead, 212 New Yorkers died of COVID-19 that day.

That sad fact may seem out of place in a review of a fashion exhibition, but there’s an elegiac quality to About Time, which makes its opening right now all the more meaningful. Its 125, mostly black garments (black, the better to highlight changes in silhouette) may look toward the future, but they also constitute a love letter to times gone by. 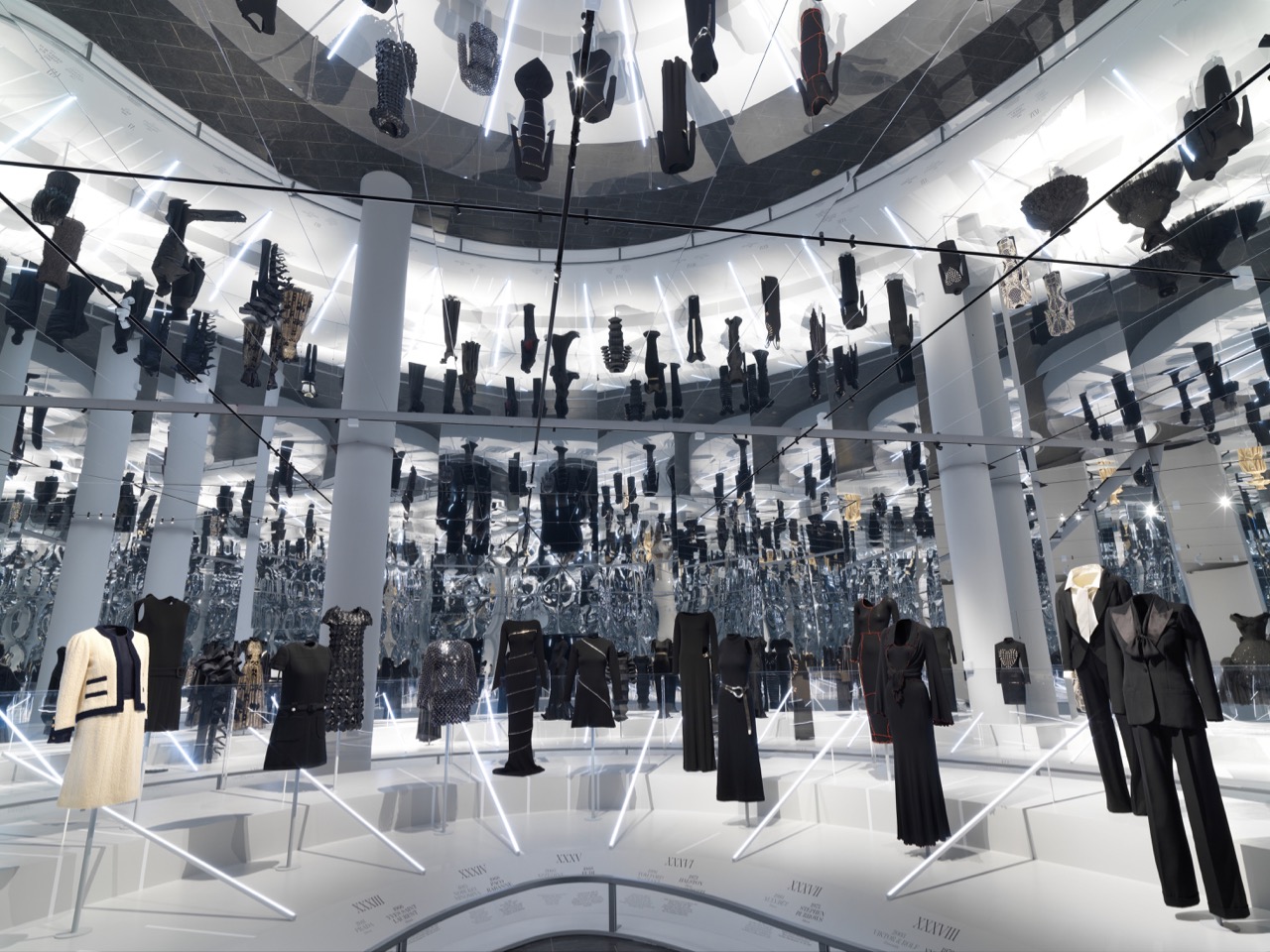 Like it or not, many of us now find ourselves thrust back into reliance on inner resources and a version of the contemplative life. So it was that, setting foot inside the Met Museum for the first time after half a year’s absence, I was assailed by memories of a very personal nature. And in viewing About Time, I found myself imagining whispered conversations from afternoon visits in New York society of the 1870s, or jazz-filled evenings at the Cotton Club in the 1930s, or sweaty nights dancing at the Palladium in the 1980s. This brainteaser of an exhibition allows the party to go on in our imaginations.

For over two decades, New York–based author and cultural critic Leslie Camhi’s essays on art, architecture, books, fashion, film, and women’s lives, including her own life and travels, have appeared in major US publications, such as the New York Times and Vogue. The author of numerous catalog essays on artists (and one legendary art dealer, Ileana Sonnabend), she also holds a doctorate in comparative literature from Yale University, and her scholarly publications include essays on female kleptomania and nineteenth-century French medical photography. Her translation from the French of Violaine Huisman’s award-winning novel, The Book of Catherine, will be published by Scribner in fall 2021.