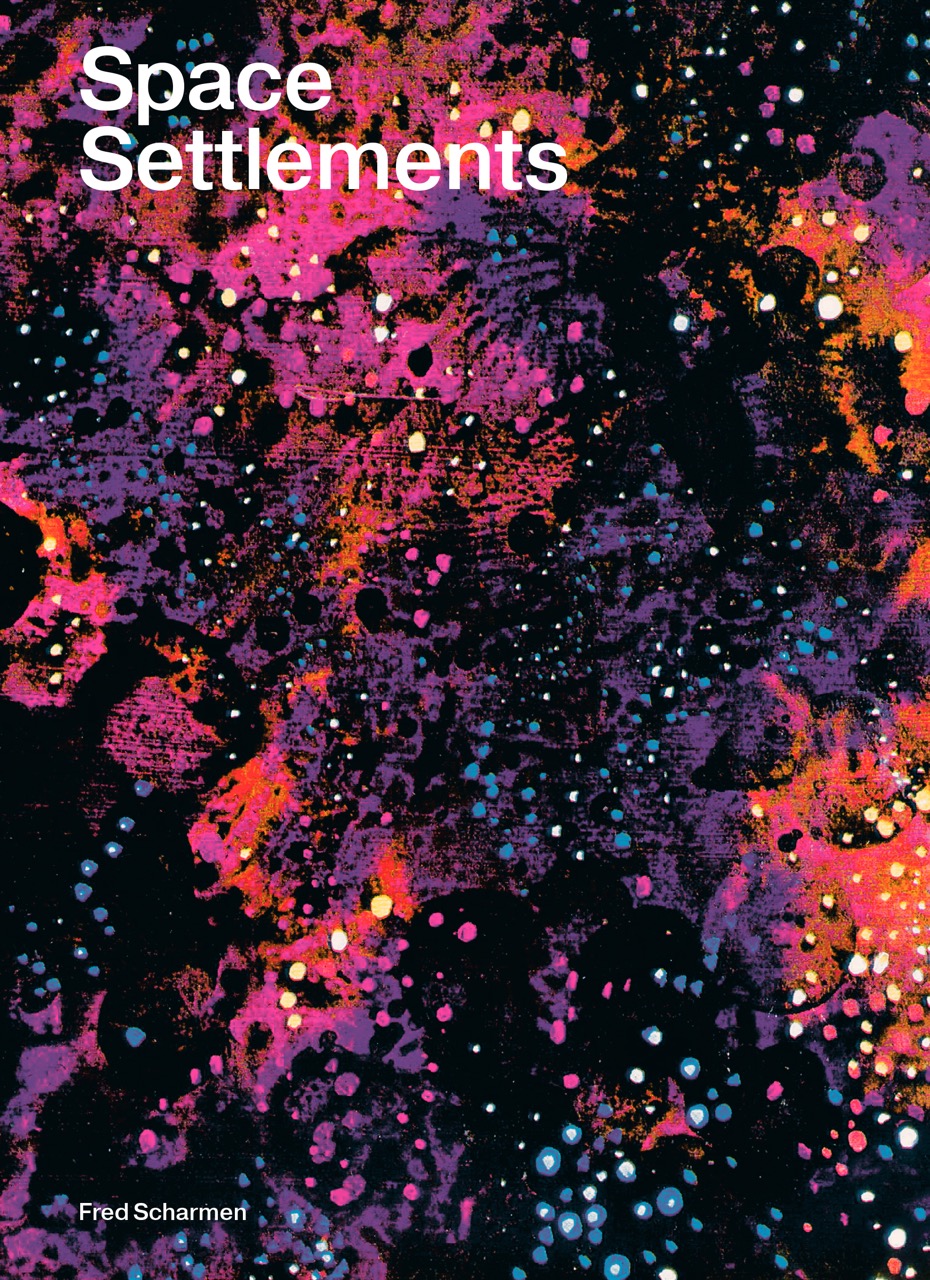 Space Settlements, by Fred Scharmen, Columbia Books on Architecture and the City, 423 pages, $24

In 2016, Elon Musk presented detailed plans for his company SpaceX to begin the colonization of Mars, using methane-propelled rockets and a target price per passenger of approximately $200,000. He anticipated that the first intrepid voyagers would arrive in the mid-2020s and imagined a fully self-sustaining community of roughly one million inhabitants within forty to one hundred years. Musk has put the odds of his own participation at 70 percent—a suspiciously precise number that appears both optimistic and noncommittal. The simplified argument for the endeavor boils down to the overpopulation of Earth, the exhaustion of its natural resources, and the wow factor of actually doing something that up to this point has existed only in the realm of speculative imagination.

Musk joins Jeff Bezos and charter member Richard Branson in the billionaire space-cowboy club, and has been “improving” his plans to convey a massive population to the red planet. In addition, NASA’s central role in space exploration has recently resurfaced, with the president tweeting that “For all of the money we are spending, NASA should NOT be talking about going to the Moon - We did that 50 years ago. They should be focused on the much bigger things we are doing, including Mars (of which the Moon is a part), Defense and Science!” Leaving aside Trump’s more egregious factual inaccuracies, outer space—and its settlement—seems to be enjoying a renewed moment in the sun. 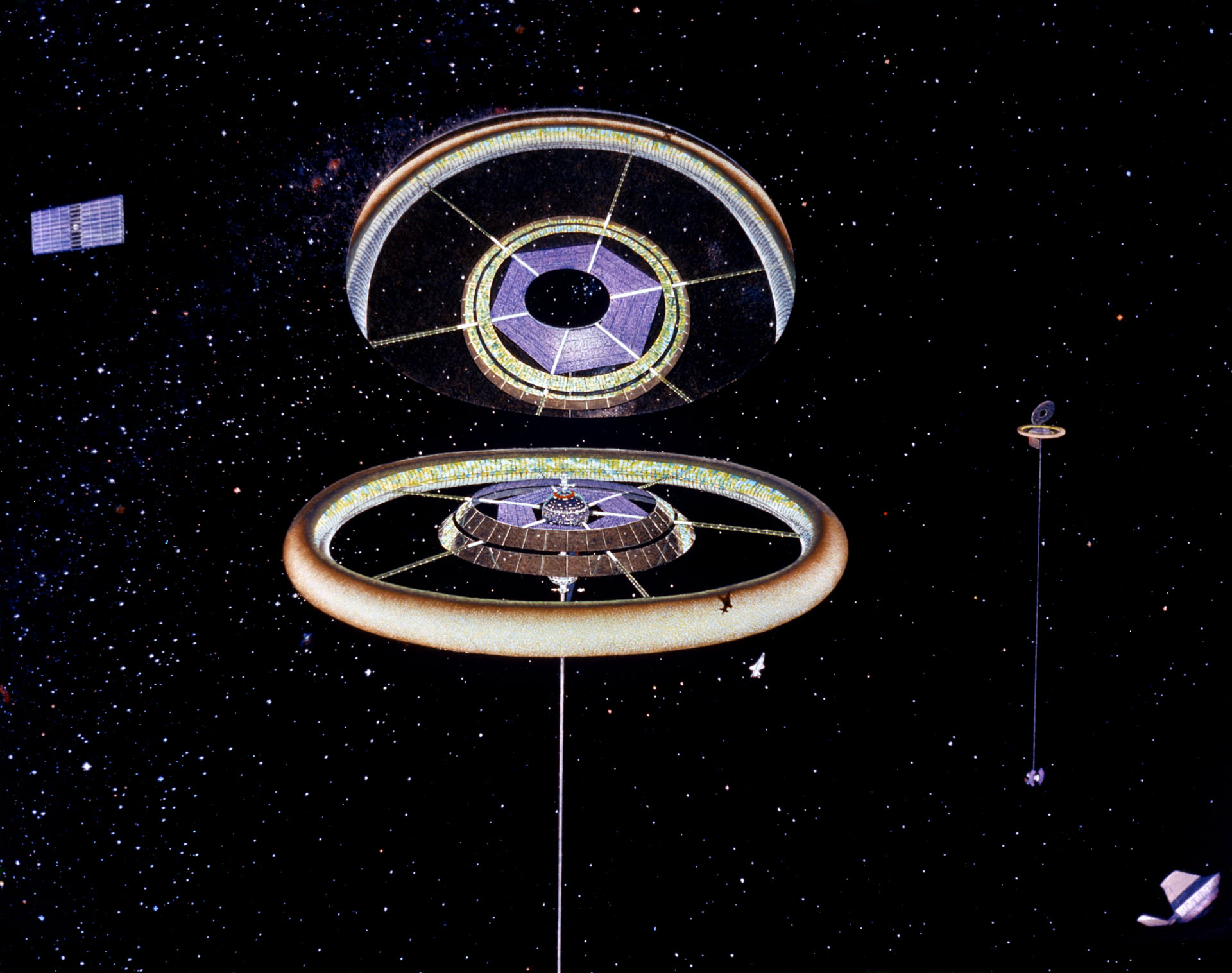 Along comes Fred Scharmen’s timely new book, simply titled Space Settlements, for those wanting a theoretically and historically inflected take on the topic. Scharmen’s text focuses on a largely forgotten chapter in NASA’s development of its space colonization strategy: the 1975 Summer Study program at Stanford University led by Princeton physicist Gerard O’Neill. With the benefit of funding and PR from Whole Earth Catalog publisher and countercultural icon Stewart Brand, a group of scientists, sociologists, artists, and architects collaborated on fleshing out the specifically technical and infrastructural details of how space colonies (or settlements) might look and function. 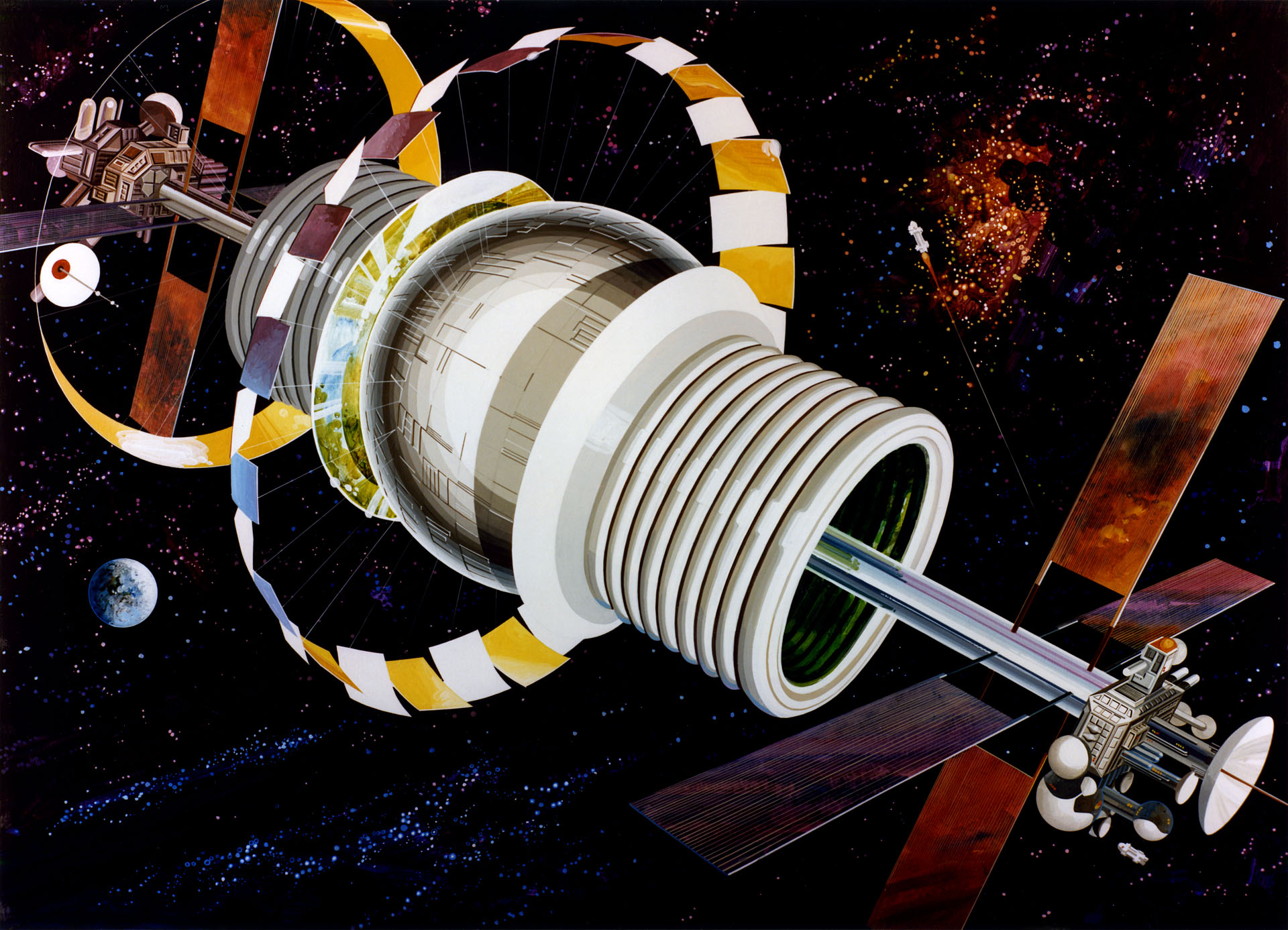 The fruits of their labor were proposals for three galactic outposts (the O’Neill Cylinder, the Stanford Torus, and the Bernal Sphere), which were elaborated in thirteen paintings rendered by Rick Guidice and Don Davis. These models were what Brand called “inside-out planets”; they were fully free-floating and not at all meant to rest on the surface of any existing celestial body. The envisioned landscapes looked like earthly terrains, though, restrained by the contours of their enclosures. The core group of paintings depicts interiors and exteriors of the three settlement structures, vibrant and incandescent against the profound blackness of the celestial void. Metallic tubes, sapphire-like starbursts, and luminous coronas abound, while the terraformed interiors are lush with verdant, rolling hills set against prismatic flashes of blue light. 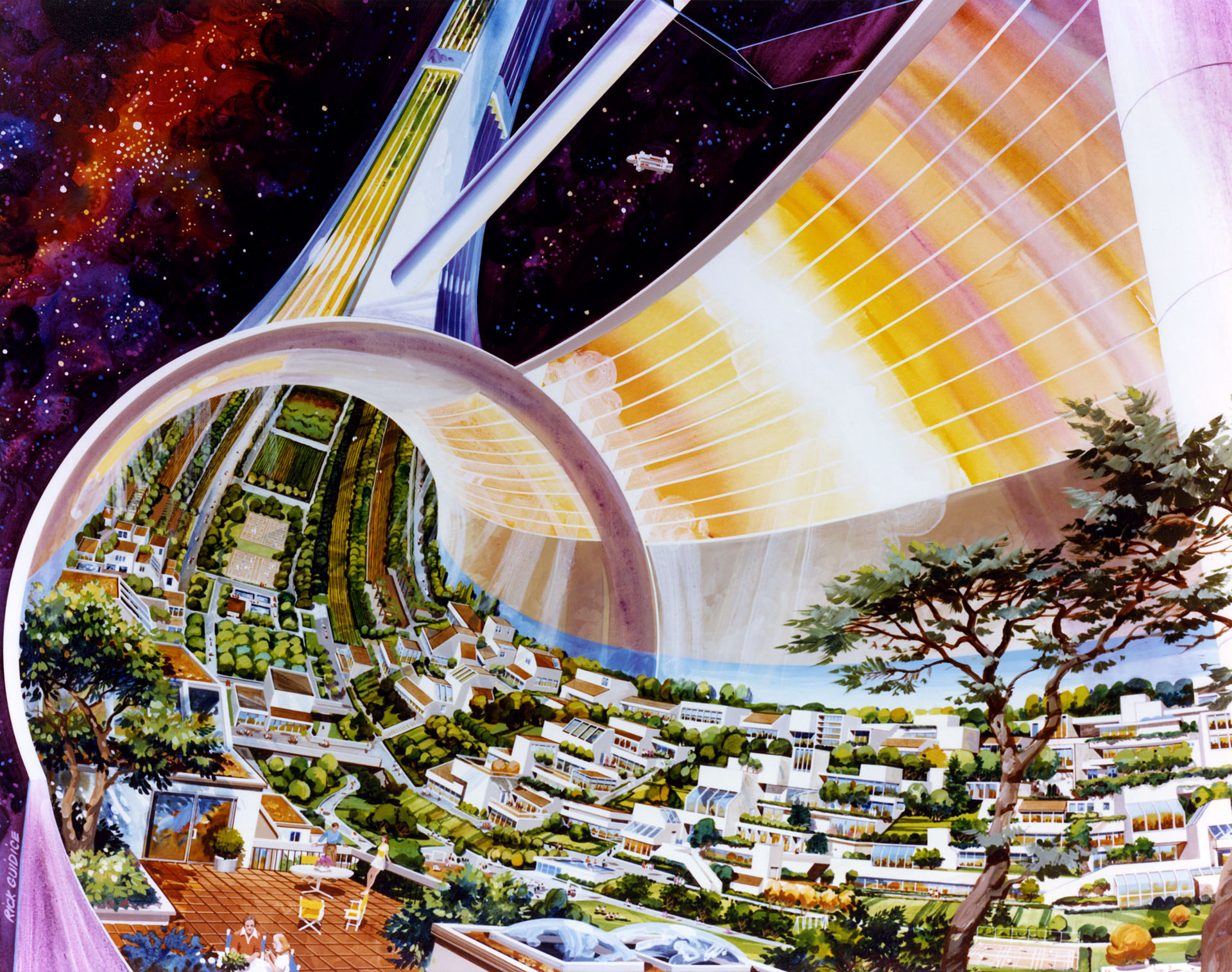 Scharmen is not the first to research this material; architectural historian Felicity Scott wrote about the same topic in a 2016 essay that has just been reprinted in book form by French publishers Editions B2. Scharmen, however, takes a wider view. He makes a valiant effort to provide both a pre- and post-history of NASA’s abandoned project and to link it to significant intellectual and technological developments stretching back to the 1920s, as well as forward to the present. At times the book feels like an attempt to fill in every possible connection between European and American architects of the twentieth century and the aspirations for an extraterrestrial future. Still, he demonstrates the intellectual, architectural, and visual precursors to these isolated projects, and begins to sketch out where and how they might be picked up again.

Scharmen invokes a number of contemporary critics and theorists to shore up the visionary aspect of the NASA project, and he refers to later examples as either echoing, mirroring, or recalling these mid-’70s gems, but occasionally he stretches the analogy beyond credulity. Is New York’s High Line really an equivalent example of “aerial speculation”? Likewise, Scharmen’s comparison between O’Neill’s belief in planetary expansion based on the dwindling economy of terrestrial space and the birth of the skyscraper as outlined by Rem Koolhaas is indicative of an apparent blind spot in the space colonist’s perspective. High-rises are connected both physically and contextually to the ground plane, with access to earthbound commodities both agricultural and manufactured, as well as to larger and more dynamic communities—all of which are lost with space colonies. The belief that space settlements will, after numerous generations, have earthly biological diversity and evolution would conceivably be constrained by the artificiality of needing to import everything both natural and man-made into the settlement. 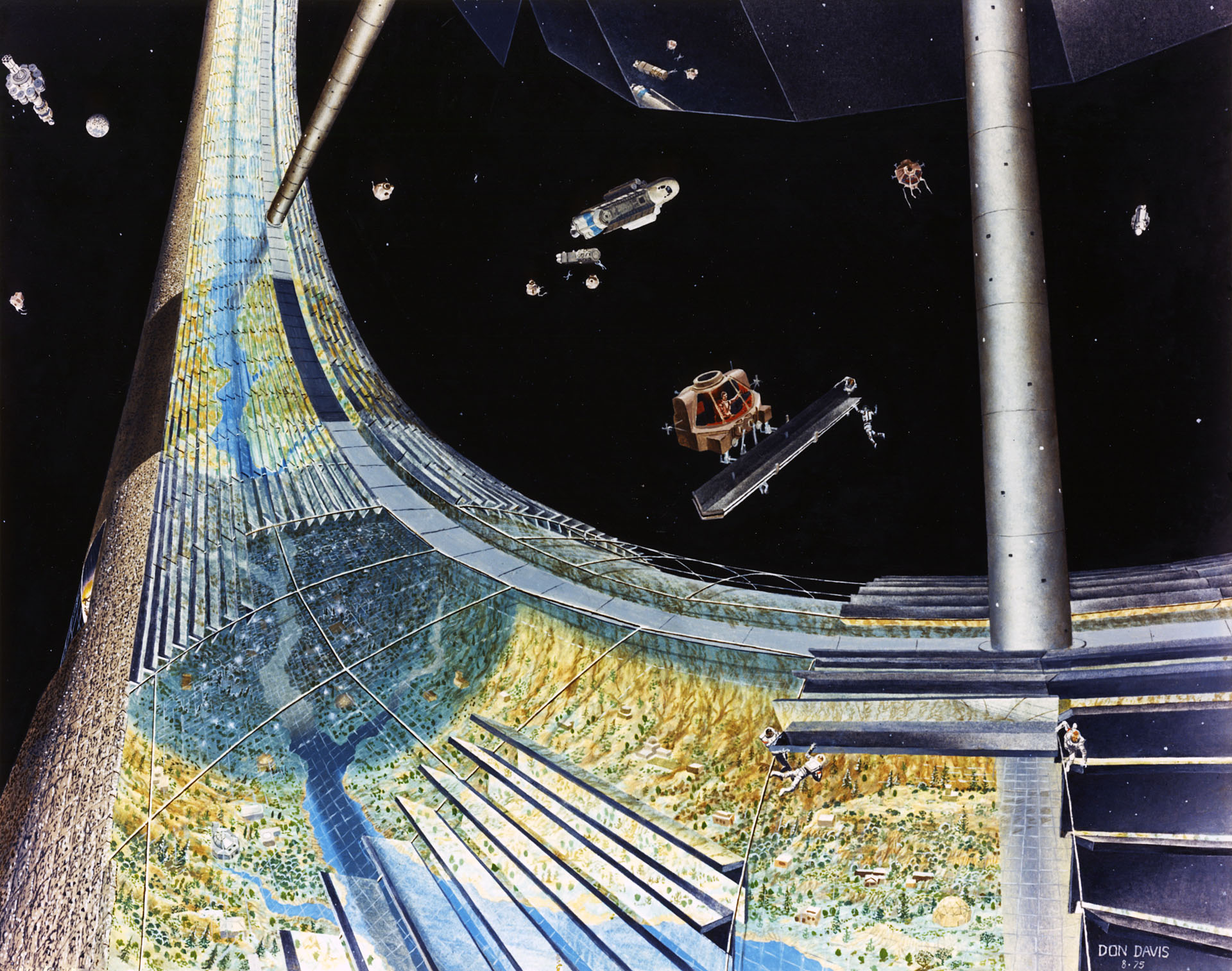 This concern, of course, is beside the point if your perspective on space colonization was nurtured by a steady diet of Ray Bradbury and Battlestar Galactica. The reason I remain unconvinced of the value of space travel (and I acknowledge that many disagree with me) is that the effort operates as a metaphorical throwing up of one’s hands with regard to the problems that exist in and among the Earth’s citizens, landscapes, and environments. We cannot exhaust our planet’s resources and then start fresh somewhere else. Planned obsolescence is not a compelling strategy when contemplating the galaxy. 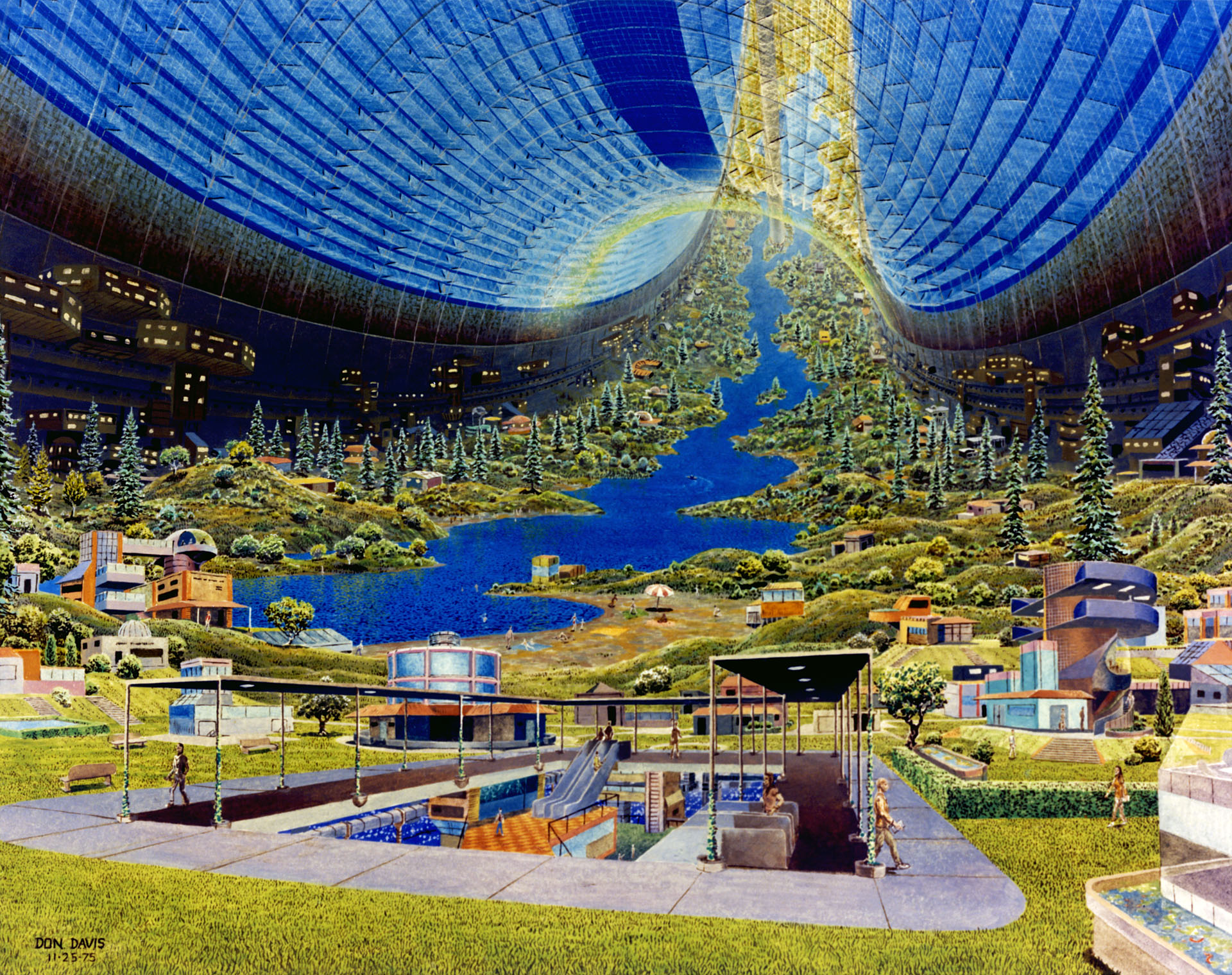 I sense that Scharmen’s geekish glee for living in spaceships overwhelms his desire to measure that novelty against the possibilities for remediating the harm we’ve caused in our own domain. For instance, he disappointingly sidesteps the issue of climate change. Chapter 4, “Architectures: Closed Loops and Open Systems,” starts with a discussion of pioneering environmentalist (and author of Silent Spring) Rachel Carson, and it appears as if he’s finally, after more than one hundred eighty pages, going to tackle what I believe to be the most salient reason for reconsidering space settlements at this point in time. But then we’re off on another tangent, talking systems theory, Carl Sagan, and the RAND Corporation. The climate crisis is a human rights issue; if it were more robustly framed as such, we might act so as to revitalize the environment for the betterment of all earthly creatures, not fund opportunities for those who can afford the luxury of an alternate planetary future. 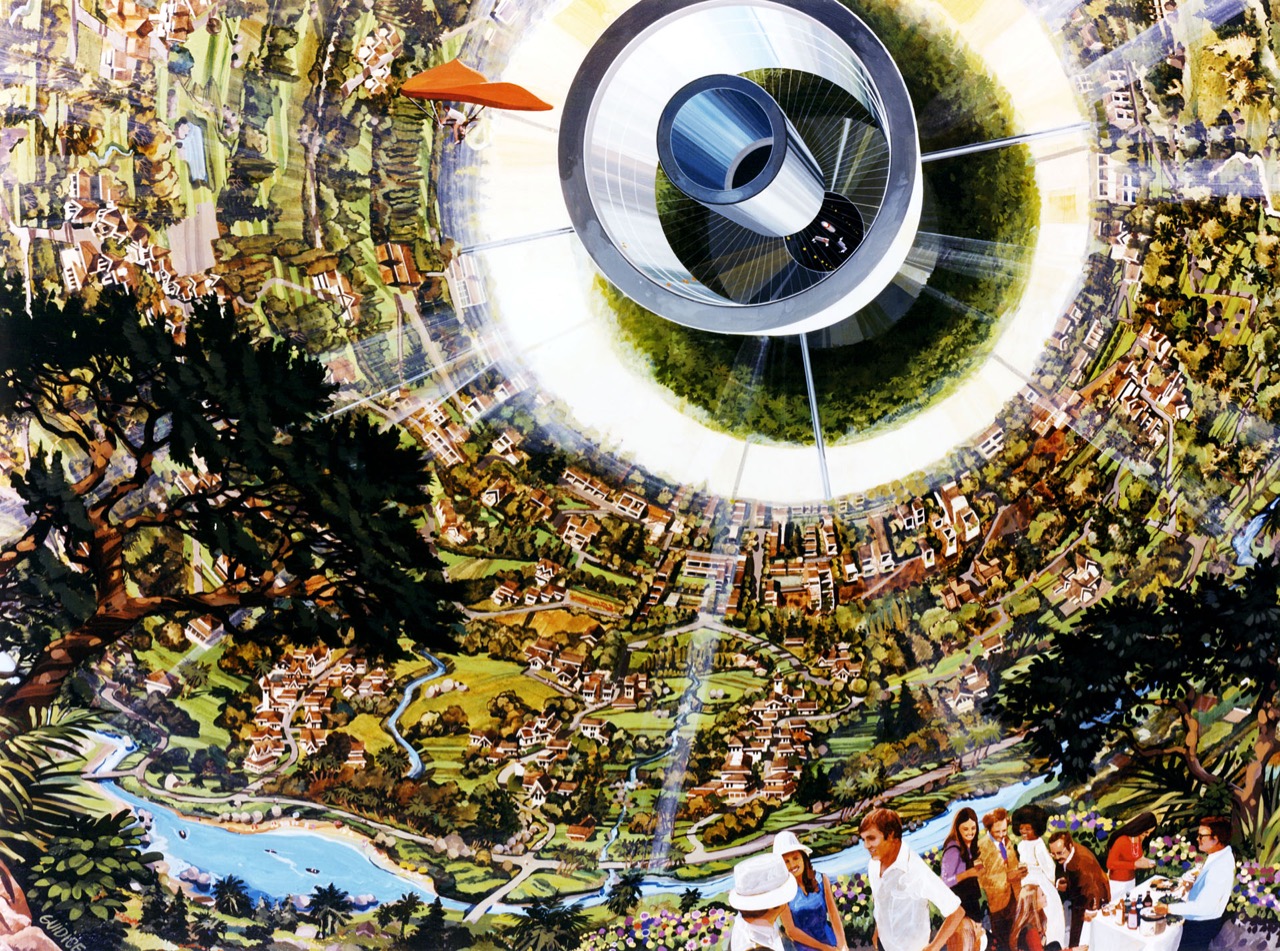 Scharmen recognizes, as he must, that Davis and Guidice’s interpretations of these space settlements are populated with carefree, young, healthy, affluent white people (it’s worth noting here that the blueprints for Jeff Bezos’s space cities were influenced by O’Neill, with whom Bezos studied at Princeton in the mid-1980s). The privilege of space colonization is made quite explicit and demonstrates nothing of the diversity, the sacrifice, and the painstaking labor necessary to all pioneering efforts. Scharmen concedes this limitation when he writes that “the designs imply that these habitats could be two things at the same time—the frontier without hardship and the city without difference.”

In one of the book’s most compelling (and worrisome) passages, Scharmen deep-dives into a set of studies on the “Psychological and Cultural Considerations” of living in an artificial environment that appeared in the report generated by NASA’s 1975 Summer Study program. One of the scientists’ greatest concerns was something called “Solipsism Syndrome”: a traumatic response of retreat resulting from artificial vistas “wrapping around their inhabitants to cocoon them against an unforgiving void.” For those of us still content—and still hoping—to explore the vastness of the Earth’s many mysteries, these space settlements seem more like dystopian amusement parks than sustainable solutions for alternative human habitation.

Noah Chasin writes on the intersection of human rights and the built environment in twenty-first-century urbanization. He teaches the history and theory of urban design at Columbia University’s GSAPP, where he is also affiliated faculty at the Institute for the Study of Human Rights. He is executive editor at the Drawing Center.