In Suzette Haden Elgin’s dystopian novel, women seek a language
of their own. 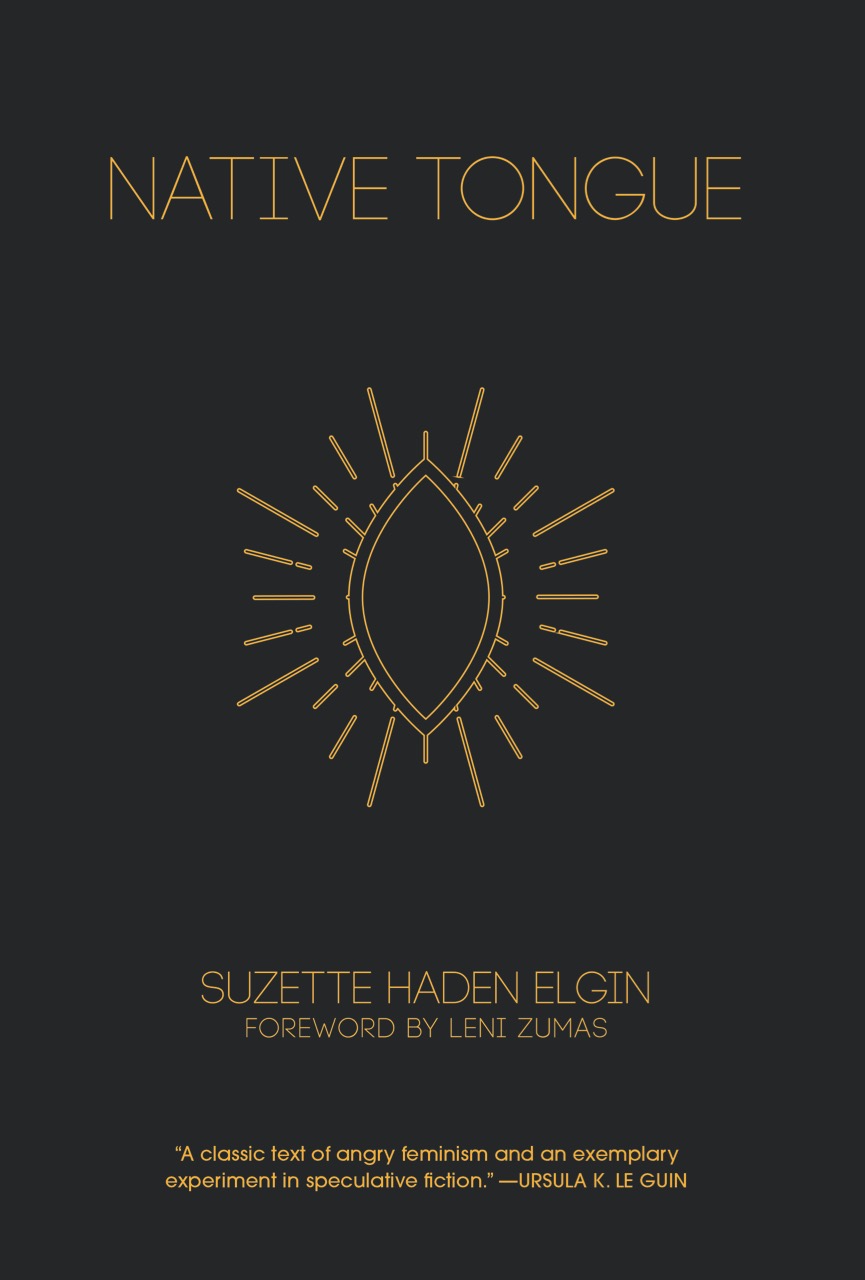 Sometimes a word or phrase enters the language that you didn’t know you needed until it was there. Intersectionality, mansplaining, and emotional labor bring social relationships into focus. Hashtags stake out categories of injustice: #MeToo, #YouKnowMe, #SayHerName. Trans- brings forth cisgender. Forced-birth extremism strips the hypocrisy from “pro-life.”

In 1984, when linguist Suzette Haden Elgin (1936–2015) published her classic dystopian novel Native Tongue, altering a phallogocentric language was an urgent feminist project. Irigaray spoke of a parler femme, Cixous of écriture féminine and writing in the “white ink” of the maternal body. Radical feminist theologian Mary Daly advocated rewriting the “dick-tionary.” And in Native Tongue, whose reissue next month feels both historical and timely, Elgin imagined a misogynist future in which women’s powerlessness is perpetuated by their lack of words. Riffing on the Sapir-Whorf hypothesis, the idea that language structures our perception of reality, Elgin inscribes a future in which, though language learning is a high art, no language on Earth has the grammar to express a female worldview.

Native Tongue opens in 2205, some two hundred years after two dramatic changes have taken place in the world. Humans have established diplomatic and economic relationships with extraterrestrial civilizations. But the shock of alien contact has brought back the patriarchal order with a vengeance. In the US and elsewhere, women have been stripped of their voting and property rights, along with the right to study or work outside the home without male permission.

The resulting society is a magnified version of white America in the 1950s, in which women are infantilized in the domestic sphere and rendered invisible in public discourse. Elgin’s dystopia is both unsubtle and limited: lacking the concept intersectionality, she eliminates racism from her future with a stroke of the pen and omits homosexuality and gender fluidity entirely. On the other hand, Elgin deftly shows how inequality enters the vocabulary that people use to talk and think about each other, skewing it in favor of the powerful while the oppressed lack the verbal wherewithal to make their feelings and experiences clear. When the main character imagines telling a man that her heart is broken, she pictures herself launching into a cumbersome, boring story and him answering, “What a fuss a woman makes over nothing at all.”

Elgin’s tense, fast-paced narrative centers on Nazareth Chornyak, a gifted Linguist married off by her father to a man she hates in order to establish an alliance between Linguist clans. The Linguists are the humans who serve as specialized interpreters in trade negotiations with the extraterrestrials. They come from a few close-knit family groups, live communally in compounds, and acquire native fluency by being raised from infancy in one-on-one contact with aliens.

Among the women of her family, especially the elder women (who live within the Chornyak compound in a dormitory called “Barren House”), she is valued for her talent for coming up with lexical encodings, or concepts in search of names. Encodings, the women believe, “come to you out of nowhere and you realize that you have always needed them; but you can’t go looking for them, and they don’t turn up as concrete entities neatly marked off for you and flashing NAME ME. They are therefore very precious.”

The women of Barren House need Nazareth because, unlike The Handmaid’s Tale, Native Tongue is not trying to warn against dystopia. It’s about the possibility of a solution. The women have organized a covert resistance project that centers on developing a language capable of efficiently and eloquently expressing female perceptions. Enciphered on scraps of paper and between the lines of recipes, this X-chromosome Esperanto, if enough people learn it, has the power to dismantle the patriarchy. It is a project so vital that women are willing to die for it. At least one woman is willing to kill in order to keep the secret.

This women’s language, called Láadan, wasn’t purely theoretical. Elgin, who had a PhD in linguistics and was the author of several books on language and power relations, including The Gentle Art of Verbal Self-Defense (1980), elaborated and described it in her A First Dictionary and Grammar of Láadan (1985). The dictionary includes the related words radina (“unfriendliness for no reason”), radona (“unfriendliness for foolish reasons”), and raduna (“unfriendliness for bad reasons”), as well as useful terms such as radiídin (a “non-holiday . . . a time allegedly a holiday but actually so much of a burden because of work and preparations that it is a dreaded occasion; especially when there are too many guests and none of them help”).

If the vocabulary of Láadan is essentialist and a bit mushy, the grammar feels like a queering of the established order. Láadan includes morphemes that require speakers to own their own perceptions—words that indicate, for instance, whether a statement comes from personal observation, a trusted source, or an unreliable third party. Elgin argues these words will forestall direct contradiction of another’s experience, such as responding to the statement “I’m cold . . .” with “Oh, you are not.” Láadan also encodes speakers’ intentions into their sentences, eliminating another form of microaggression, the rude comment that is passed off as “just a joke.” A new edition of the dictionary, supplemented with words from other Láadan speakers, will be published in 2020 by Union Street Press.

“Grammar is politics by other means,” Donna Haraway said, yet the language Elgin thought would bring the revolution never caught on. Disappointed, Elgin wrote two sequels to Native Tongue—The Judas Rose (1987) and Earthsong (1994)—but gave up her hope for change through language. Instead she resorted to imagining a radically posthuman, postapocalyptic future in which aural nourishment—living off music—allows the evolution of a nonhierarchical, nonviolent species.

A language for women was a millenarian project that died of its own difficulty, helped along by a bad case of backlash. But in an era when the public discourse feels particularly phallogocentric and the dicks seem to be in charge, Native Tongue still feels like a necessary and exhilarating book. It doesn’t look like flash cards and grammar lessons are going to bring the revolution. But Elgin is Atwood-level good at showing how patriarchy is perpetuated through talk. And in re-creating the verbal manipulations of alpha-male spew, she makes her readers aware of how it’s done, which is to say, how to resist it.