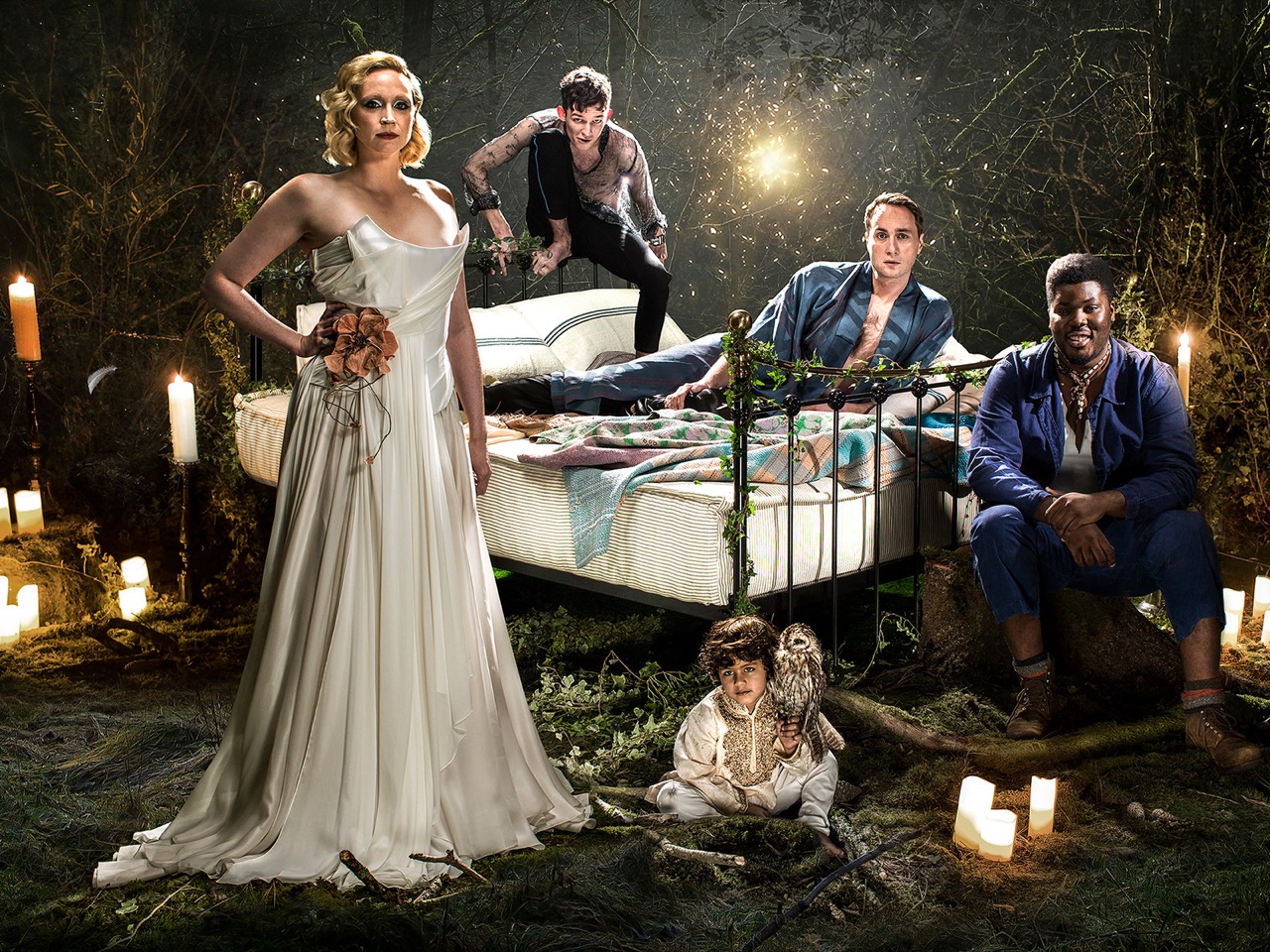 A Midsummer Night’s Dream, by William Shakespeare, directed by Nicholas Hytner for Bridge Theatre, streaming here as part of the National Theatre at Home series through July 2, 2020

A theater crowd milling about preshow, gawking at the space, nursing beers or taking group selfies doesn’t usually put a lump in my throat. But then, I haven’t been inside a theater for 106 days. I’ve almost forgotten what it’s like to curl the program and pray for minimal coughers and no eleventh-hour ringtone. Not that I’m really there; on my laptop I’m watching Londoners fill the cavernous Bridge Theatre for director Nicholas Hytner’s immersive, queer-carnival A Midsummer Night’s Dream—captured last summer for broadcast on NT Live. How I envy that innocent mob. All those strangers cheek by jowl, braying with laughter, inhaling one another’s droplets, blithely ignorant that the future wears a mask.

“Lord, what fools these mortals be!” fairy factotum Puck might sneer at my vicarious nostalgia. Puck is what we’d call a superspreader; the disease he sows is not a respiratory virus, but instant love housed in a flower pierced by Cupid’s arrow. As Stephen Greenblatt notes in his introduction to A Midsummer Night’s Dream in the Norton Shakespeare, desires in this comedy are “intense, irrational, and alarmingly mobile. . . . The speed with which desire can be detached from one object and attached to a different object, does not diminish the exigency of the passion.” Love knows love when it sees it, to put it circularly—but can the eye be trusted? Puck brushes his amatory petals over the sleeping eyelids of the lovers and fairy queen Titania, who straightaway fall for the “wrong” persons. “Love looks not with the eye, but with the mind,” spurned Helena consoles herself, “and therefore is winged Cupid painted blind.” The play asks whether anyone—a sprite, a mortal, a theatergoer—can believe what they see, not sure if they’re awake or dreaming. 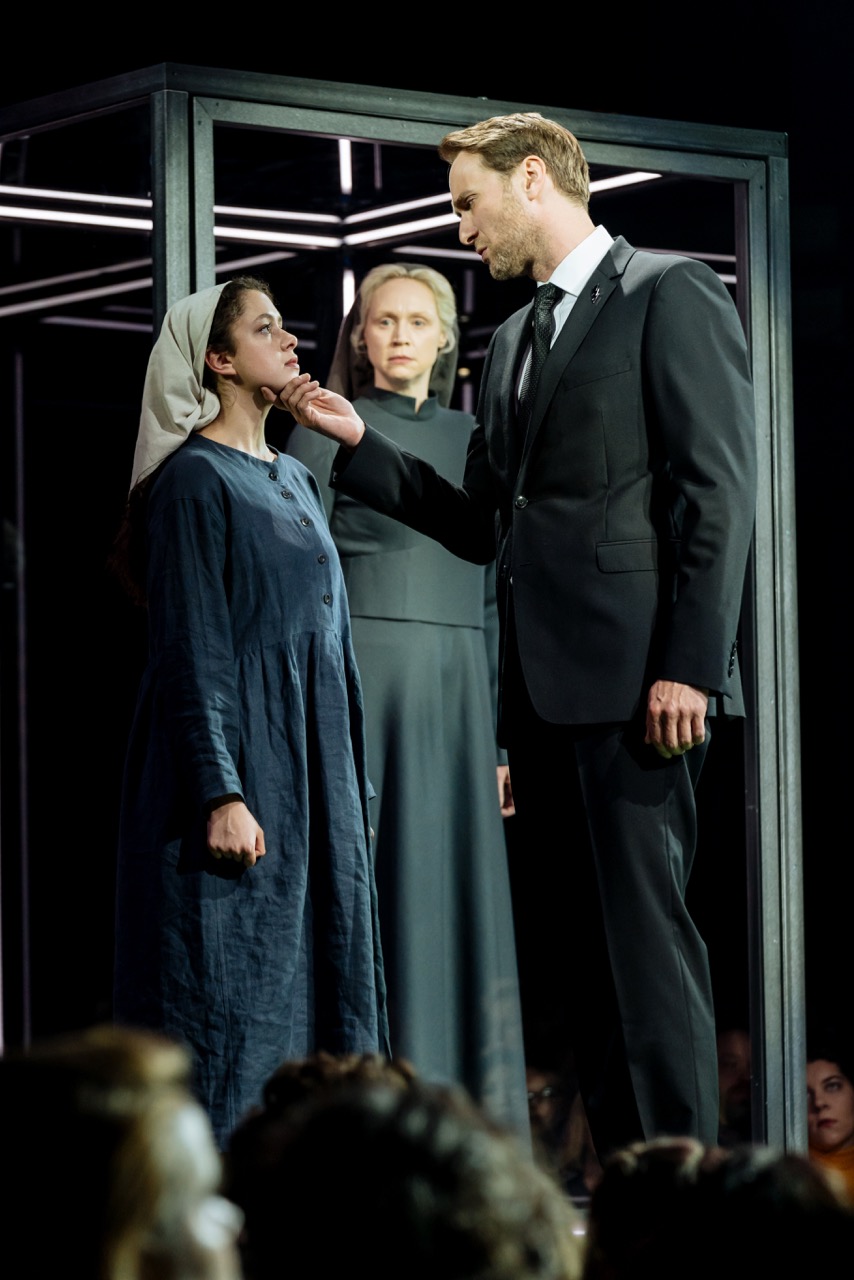 Young Hermia (Isis Hainsworth) and Lysander (Kit Young) flee into the woods beyond Athens when Hermia’s unyielding father insists she marry the boy of his choice, Demetrius (Paul Adeyefa). Demetrius, who had been wooing Helena (Tessa Bonham Jones), gives chase, with still-loyal Helena in his wake. These ardent, wandering youths form one strand of the ingeniously interwoven Dream. There’s also the narrative frame of Athenian prince Theseus (Oliver Chris) and his Amazonian bride-to-be, Hippolyta (Gwendoline Christie), whom he has won in military combat. Their uneasy, politicized nuptials are mirrored in the open conflict between Titania and fairy king Oberon (double-cast Christie and Chris) in the forest realm. The ethereal monarchs haven fallen out over Titania’s refusal to give Oberon the orphaned son of a votaress that he demands as a page. Frustrated, Oberon schemes to get even by ordering Puck (David Moorst) to sprinkle love potion on Titania and make her fall in love with the first “vile thing” she espies. 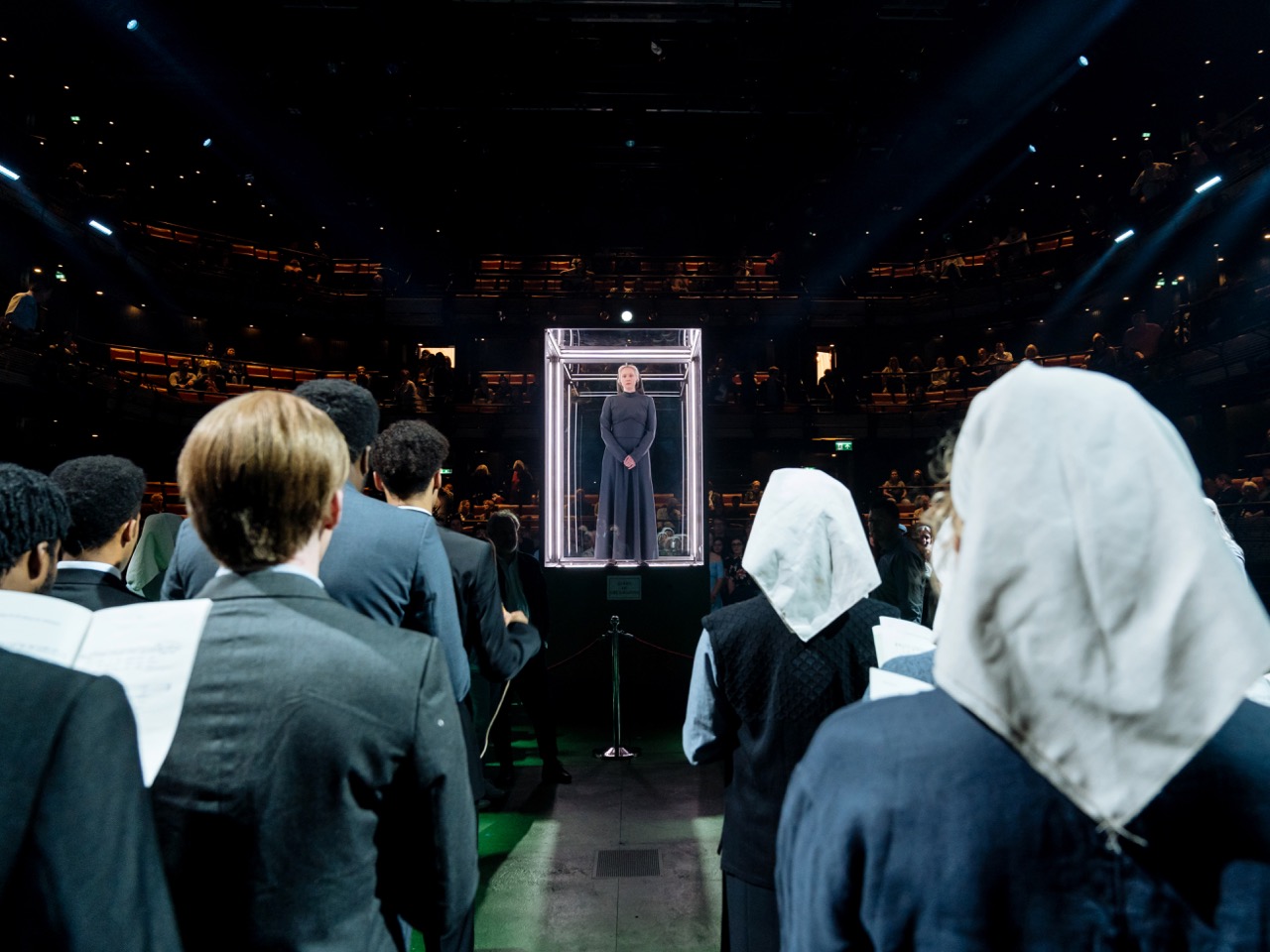 Last of the subplots belongs to the “rude mechanicals,” Athenian laborers rehearsing a play for the royal wedding of Theseus and Hippolyta. The story the “hard-handed” buffoons choose is that of star-crossed lovers Pyramus and Thisbe—in their mangled, amateur telling, more farce than tragedy. The pushiest and most obnoxious of the rudes, Bottom (Hammed Animashaun), ends up as Titania’s love object, but only after his head has been transformed into that of a donkey, thanks to more Puckish mischief.

Here we must pause to note director Hytner’s conceptual take on this most beloved and overproduced of Shakespeare comedies: he swaps crucial lines between Oberon and Titania, so now it is Titania who demands the boy from unwilling Oberon. And thus, Oberon is the one who gets doused in love potion and falls headlong for ass-ified Bottom. The spectacle of starchy, public schoolboy Chris mad with horniness for the boisterous, game-for-anything Animashaun is not played for homophobic laughs, but as a source of liberating joy palpable even from one’s laptop. Just before intermission, Oberon and his long-eared paramour join in a wild mating groove to Beyoncé’s euphoric bopper “Love on Top,” and suddenly the play’s original intent—humiliating a strong female character by tricking her into bestial misalliance—evaporates in a celebration of polymorphous desire. It also gives new meaning to the name Bottom. 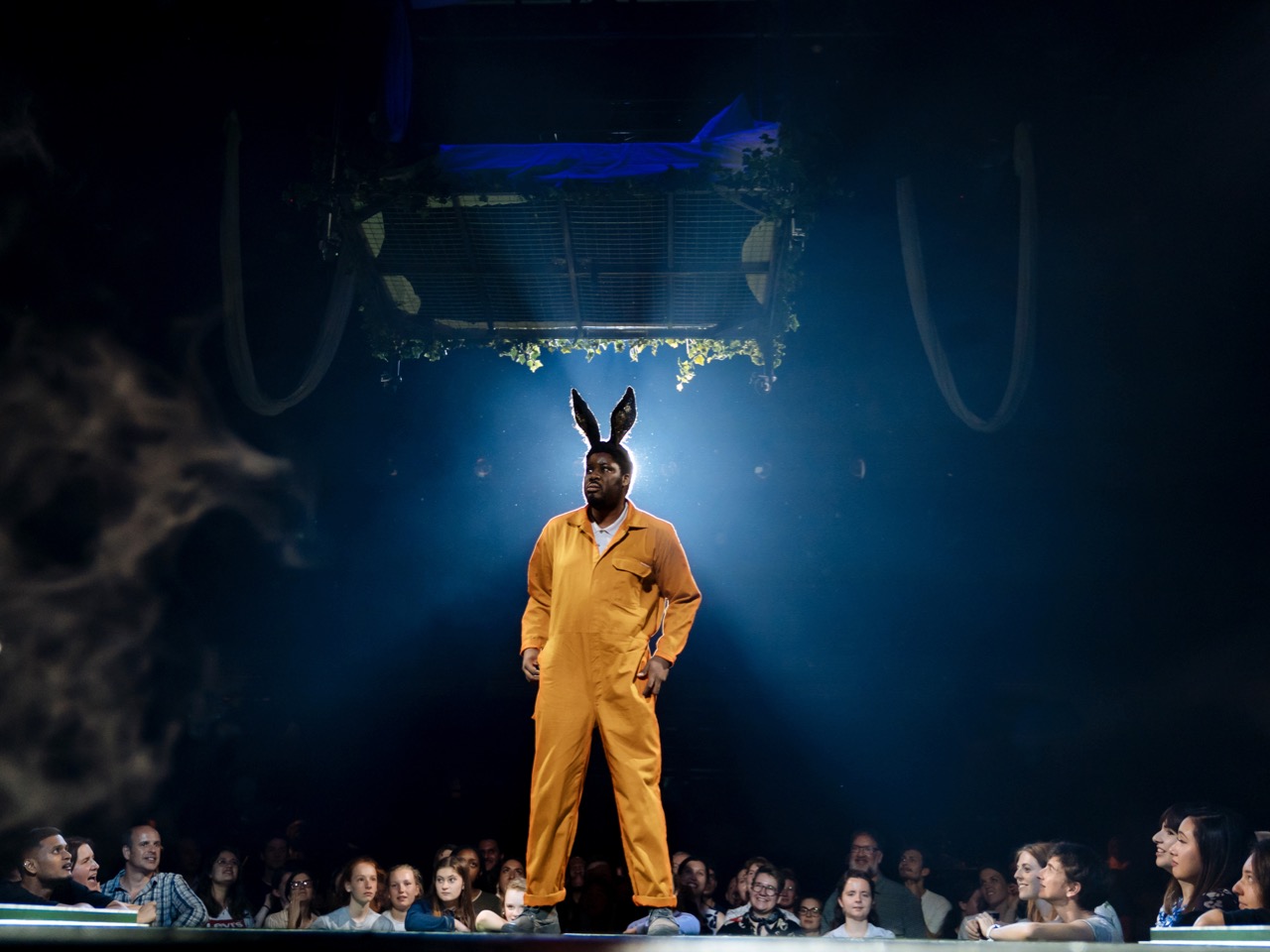 Dream accommodates such Pride-ful intervention. It has always been a drama of social hierarchy with a core of eco-sexual anarchy; the latter amends the former. With its swoops of lyrical nature poetry leavened by earthy prose, court pomp and enchanted whimsy cueing designers for eye candy, and the time-tested pleasures of a three-decker battle of the sexes with clowns at the end, Dream is Shakespeare’s Coca-Cola. If you don’t like it, maybe you just don’t like soda. Unique for having no clear source mined by the adaptation-prone author, its woodlands fairies and mystic flora suggest a deeply personal, imaginary world from the boy who grew up roaming the forests of Stratford-upon-Avon. Biographers such as Greenblatt have read the play as a primal fantasy of the young Will synthesizing aristocratic entertainments with folk mythologies.

Whatever its provenance, the play is a perennial favorite that directors are at pains to freshen up. Hytner, who founded the Bridge Theatre in 2017 as a sequel to his critically admired and popular tenure at the National Theatre, renders new magic with one foot in the past and the other in the present. With limber pixies executing acrobatic moves in aerial silks above audience members’ heads, the production owes an obvious debt to Peter Brook’s landmark, 1970 “white box” staging of Dream. Brook deployed a bare stage, colorful robes and jumpsuits, and multicultural touches (Indian chants, Chinese circus acts) to shuck off Dream’s centuries of encrusted spectacle and Victorian folderol, and his experiment has reverberated down the decades as the very model of modern Shakespeare. 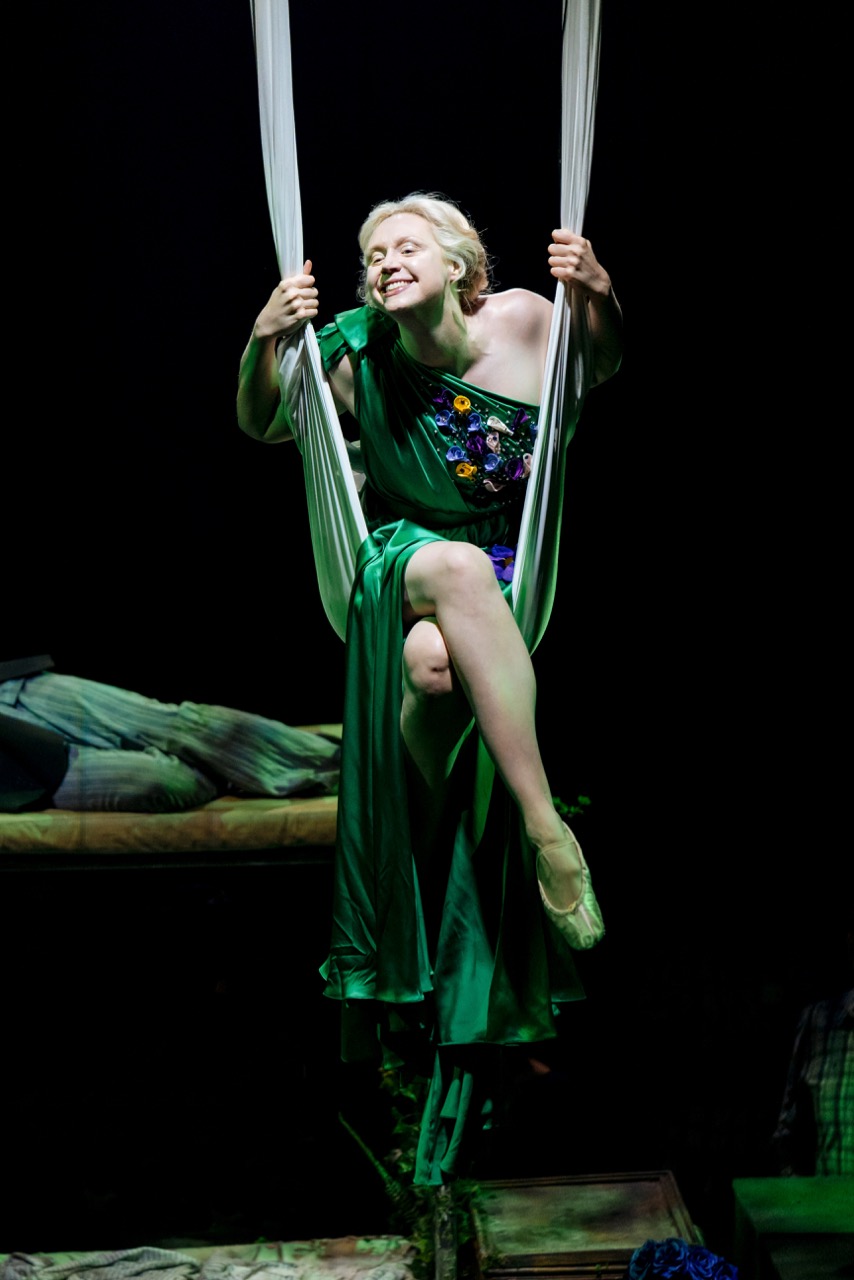 At the Bridge we have a Dream that is a bit of an LGBTQ rave. In set designer Bunny Christie’s fragmented, unmoored vision, squares of greensward rise out of the Bridge floor; beds levitate as fairies twist and dangle in cloth. Most of the audience stands in the main space as actors dash through the people-woods. Moorst’s punk, vaguely neurodivergent Puck clears spectators with a menacing, “Move.” Gwendoline Christie, dear to Game of Thrones fandom as Brienne of Tarth, seems to be enjoying human dialogue for a change, her moony elvish mien aglow with naughtiness or clouded with contrition as her Titania assumes the alpha position.

Theater online can be draining, but NT Live’s fluid editing and multiple cameras make for pleasant viewing. If you can endure the pain of wanting to be there in the flesh, this Dream makes for a charming, elevating escape as we wait for the world to awaken.