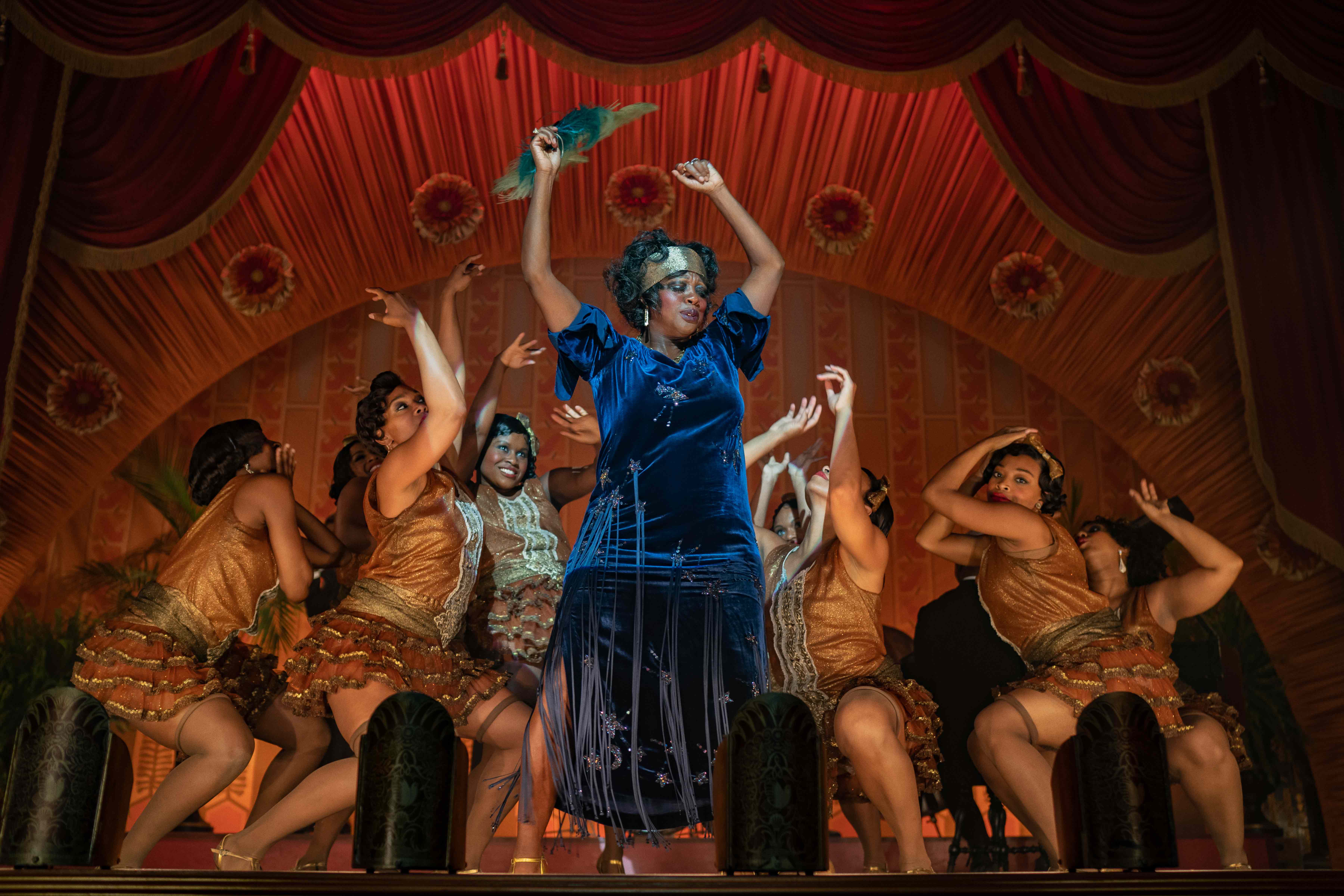 Talking with fellow playwright Suzan-Lori Parks months before he died, in 2005, August Wilson recalled another interview eighteen years earlier, after the premiere of The Piano Lesson, the “1930s” installment of his Century Cycle. A white reporter asked: Now that you’ve written these four plays and exhausted the African American experience, what’s next? Wilson and Parks shared a weary laugh over the grotesque ignorance of the query.

After a thousand-plus pages of dense dramatic text about the joys and tragedies of Black characters across the twentieth century, Wilson knew the work still wasn’t over. By the time of his death, he had technically finished the decalogy with Radio Golf, set in 1997. But what’s not exhausted is the next step: translating Wilson’s epic project into different media. Denzel Washington is leading that charge; he directed and starred in a big-screen version of Wilson’s Fences in 2016. With the release of the Washington-produced Ma Rainey’s Black Bottom, a sweaty, luscious, death-hug of a film directed by George C. Wolfe, the journey’s early yet. 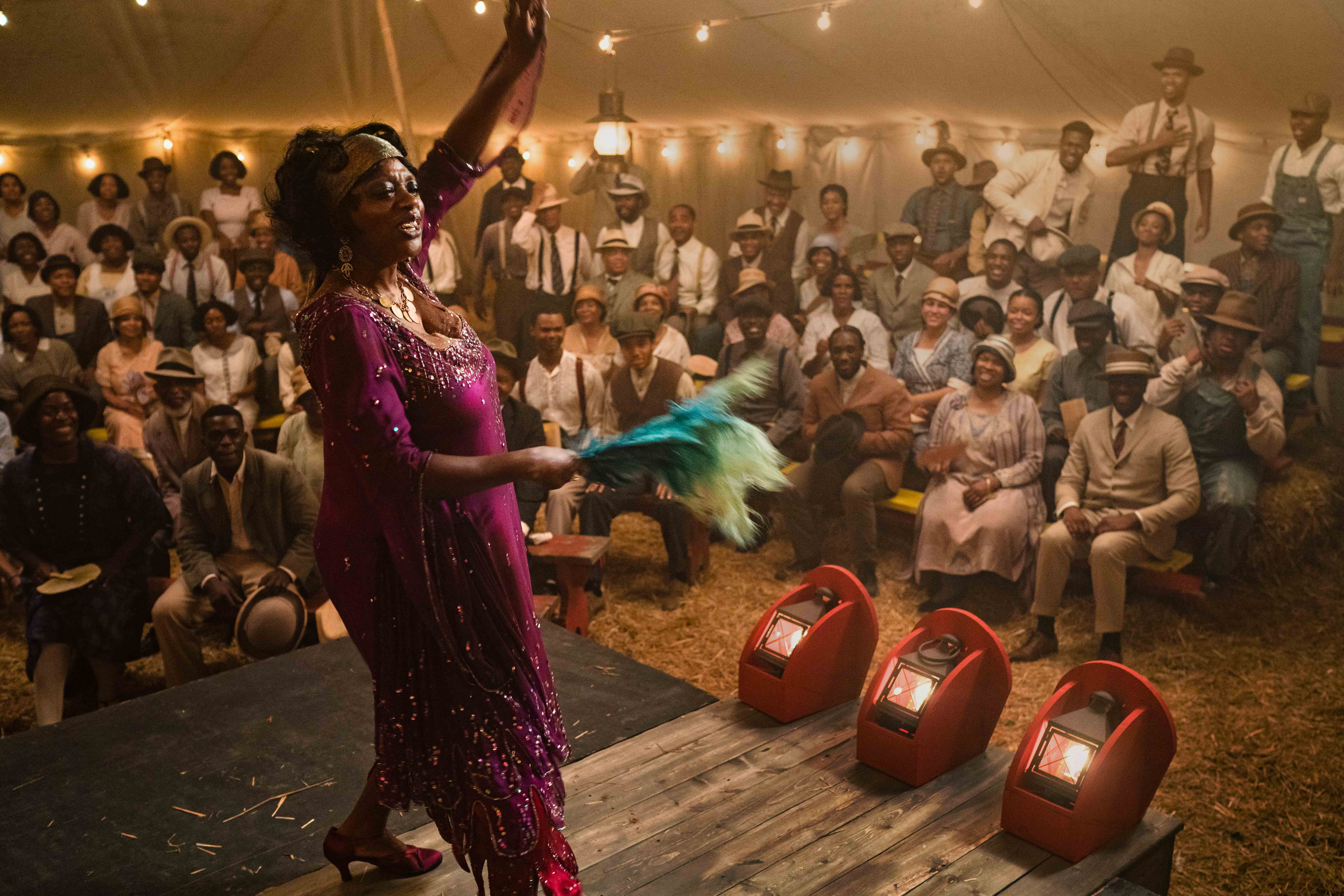 Journey and escapism are the keynotes in the first few scenes of this sensual, musical theater–tinged adaptation, which screenwriter Ruben Santiago-Hudson expertly distilled from the lengthy source into ninety minutes. We open on two Black men racing through the Georgia woods, dogs baying in their wake. Such imagery comes freighted with dread history: Are they slaves, escaped prisoners, or the soon-to-be lynched? No: they’re rushing to catch a concert in a backwoods tent, where a grateful crowd watches Ma Rainey (Viola Davis) croon and sway seductively to “Deep Moaning Blues.” Voluptuous and louchely beatific, Davis incarnates the real-life blues icon (1886–1939) as warrior queen: cheeks rouged up, lips a puce smear, gold-capped teeth ready to tear meat. It’s show biz as survival. 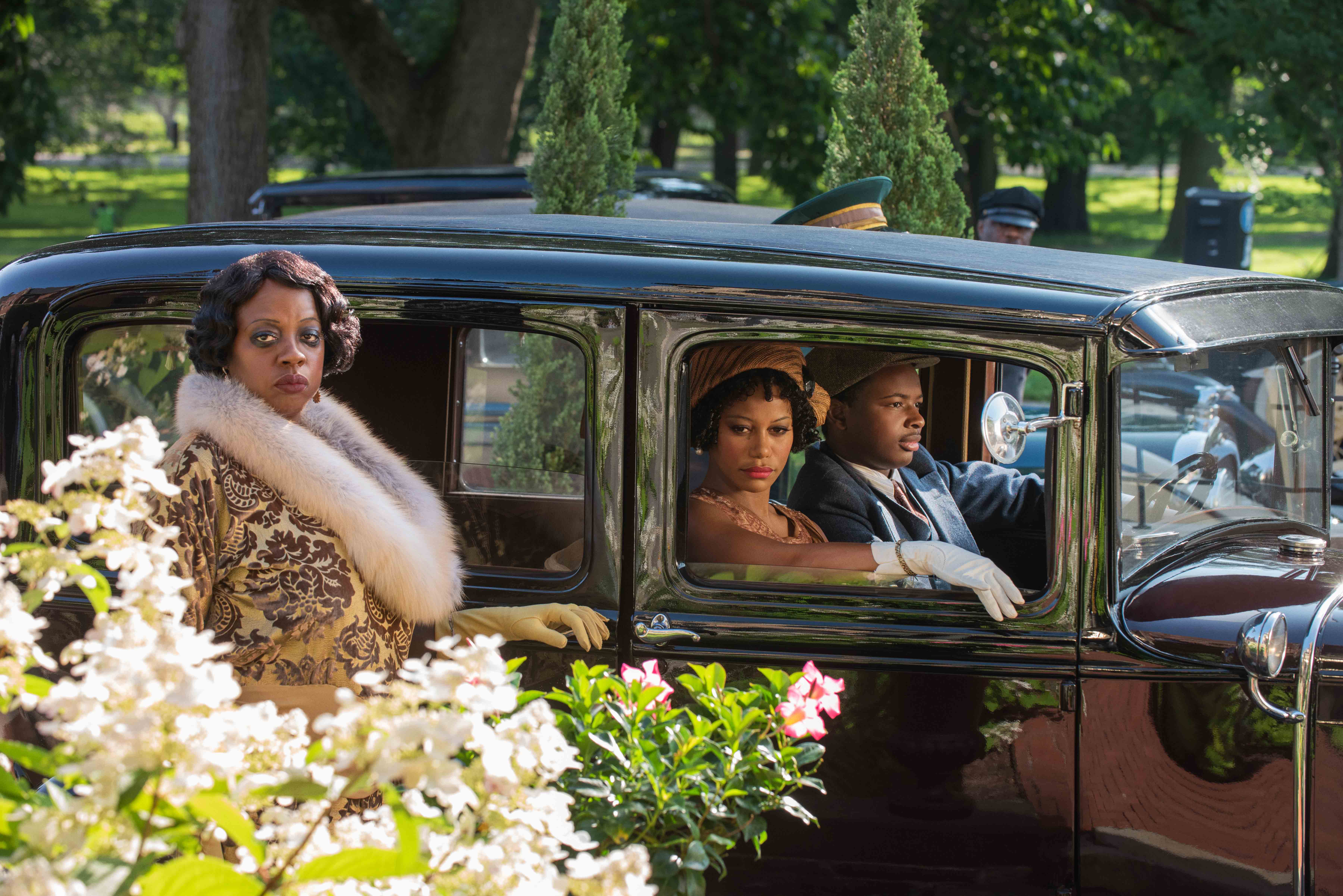 From this Southern rhapsody (one of a few surgical expansions of the Wilson), Wolfe and cinematographer Tobias Schliessler fade to a newsreel-ish montage that carries us from the Deep South to 1927 Chicago, linking the Great Migration to a day in which Ma Rainey and four bandmates will record her new album. This settles us into Wilson’s drama, which ran on Broadway in 1984, and unfolds entirely in the recording studio and in a downstairs rehearsal room where the musicians wait for Ma to appear. She shows up late with saucy girlfriend Dussie Mae (Taylour Paige), delayed because her nephew and chauffeur, Sylvester (Dusan Brown), got into a minor fender bender. Brazen and domineering, Ma commences to wrangle with her eager-to-please white manager, Irvin (Jeremy Shamos), and the glowering studio owner Sturdyvant (Jonny Coyne). She demands that stuttering Sylvester record a spoken intro, overrides band and white executives, insists on having her two cold Coca-Colas, threatens to walk, but grudgingly records the tracks. 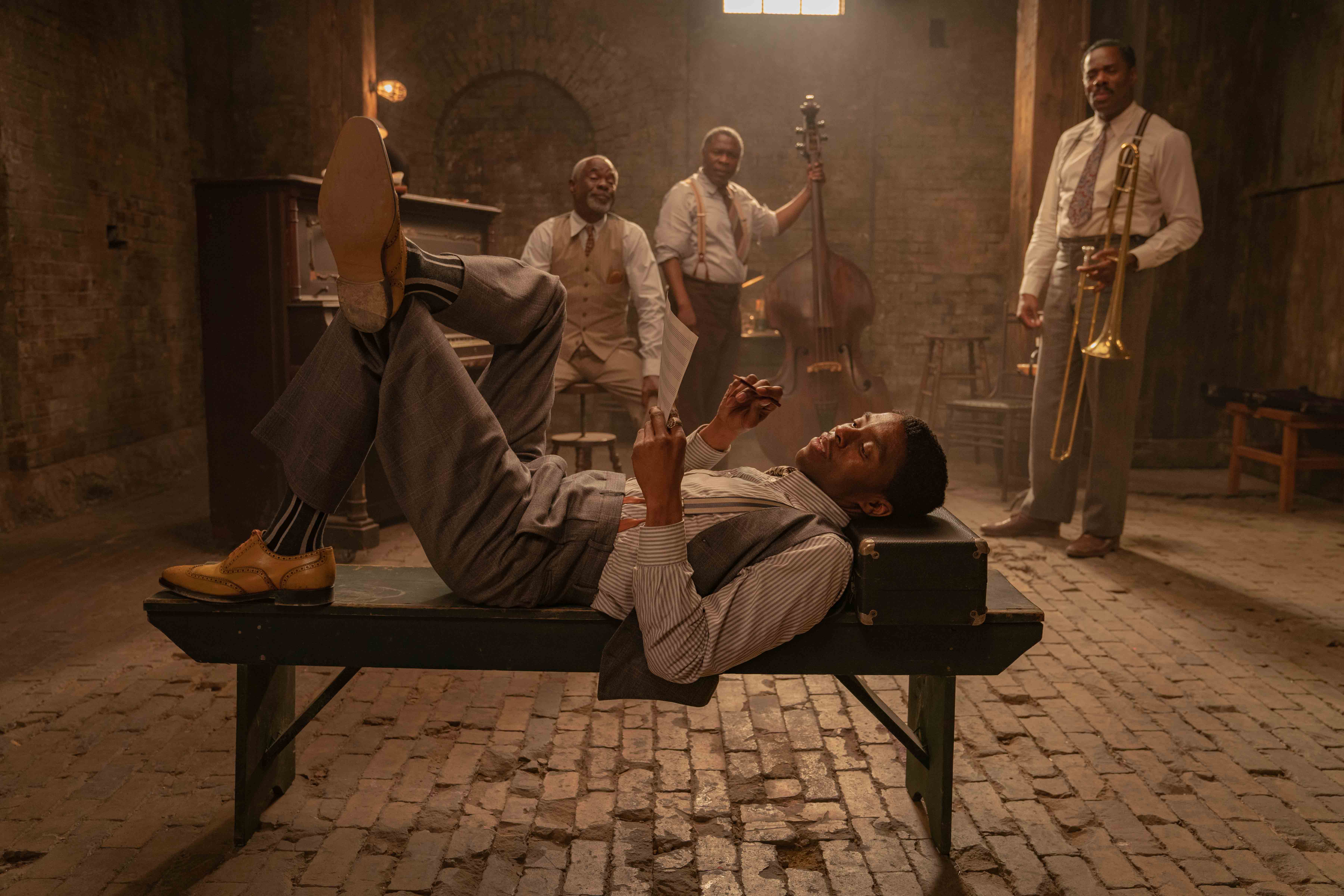 That’s just part of Ma Rainey’s Black Bottom, the historical-fiction veneer. The other half, the narrative’s “bottom,” happens below deck in the dingy rehearsal room, among the musicians who back Ma. These men pass the time sharing a flask and reefer, bullshitting, bickering, spinning tales, their paths twisting unwittingly toward a fatal spasm by day’s end. This unofficial chorus includes Cutler (Colman Domingo), bandleader and trombonist, a low-key, God-fearing soul who swallows his anger. Pianist Toledo (Glynn Turman) is bookish, with an anthropological way of seeing his fellow man. Practical-minded bassist Slow Drag (Michael Potts) is impatient to play the songs and get out. And then there’s Levee (Chadwick Boseman), the young, hot-shot cornet player sick of all the “jug band shit” Ma prefers. Levee knows the future is jazz; confident that Sturdyvant will record his songs, Levee dreams of sliding his way his way into unimaginable wealth, women, and fame. He already has the shoes: an $11 pair of yellow Florsheims that play a role in the bloody finale.

Pitch-perfect casting and shrewd adaptation are two reasons for success here. Wolfe has an obscenely talented ensemble at hand, from slow-boiling, emoting-from-her-viscera Davis to a Boseman ablaze in his valedictory turn. Haunted by death in character and in life, the elegant, heroic actor burns so very brightly as Levee, a wolfish smile topped by big brown eyes of inexpressible sadness. Boseman leaves us with a dancer’s grace and a great tragedian’s pathos: Levee the jazz dreamer, blasphemous trickster, and chaos agent who nevertheless finds himself fortune’s fool when the white power structure asserts itself. Even Shamos runs countless variations on the conciliatory, obsequious, but finally dismissive boss-parasite. 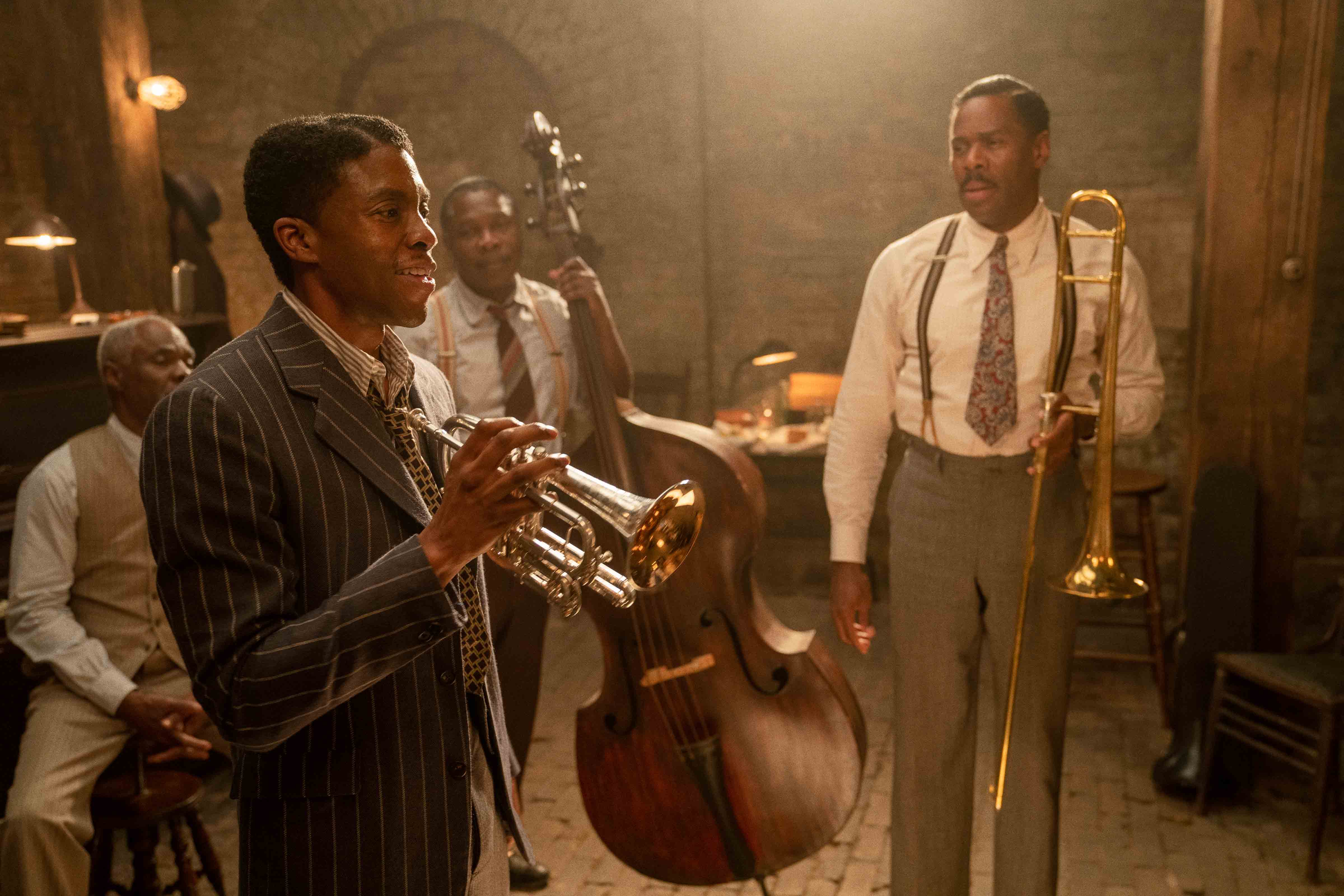 Wolfe’s camera is attentive to petty prejudice among Black folx as much as the white gaze. As Cutler, Toledo, and Slow Drag make their way to the recording studio from the “L,” they run a gauntlet of cold, appraising white looks on the street. Likewise, Wolfe lingers over the supercilious gazes of light-skinned Black guests as the gold-toothed, heavily made-up Ma struts through a hotel lobby arm-in-arm with Dussie Mae. To be Black—and Southern—in the north is to be in a war zone. When Ma steps up to an irate cop who arrives at the scene of the car accident, daring him to mess with her, Davis’s bodily vehemence is a palpable provocation.

At the center of the story, Wolfe sets two monologues side by side. In the first (running five minutes and uncut from the play), Levee bitterly rejects the band’s taunts that he’s “spooked up by the white man.” He recounts a searing incident from his childhood: he saw his mother gang-raped by a bunch of white men and was slashed across the chest trying to protect her—brutality for which his father patiently exacted revenge. This is followed by a dreamy interlude, the camera drifting over Toledo noodling at the keyboard. In singsong, he makes an extended metaphor for history as a stew, with Black people as leftovers after the white man has supped. “Now, what’s the colored man gonna do with himself?” Toledo murmurs. “That’s what we waiting to find out.” Two philosophies for our consideration: revenge or renaissance. Are they opposed or complementary? 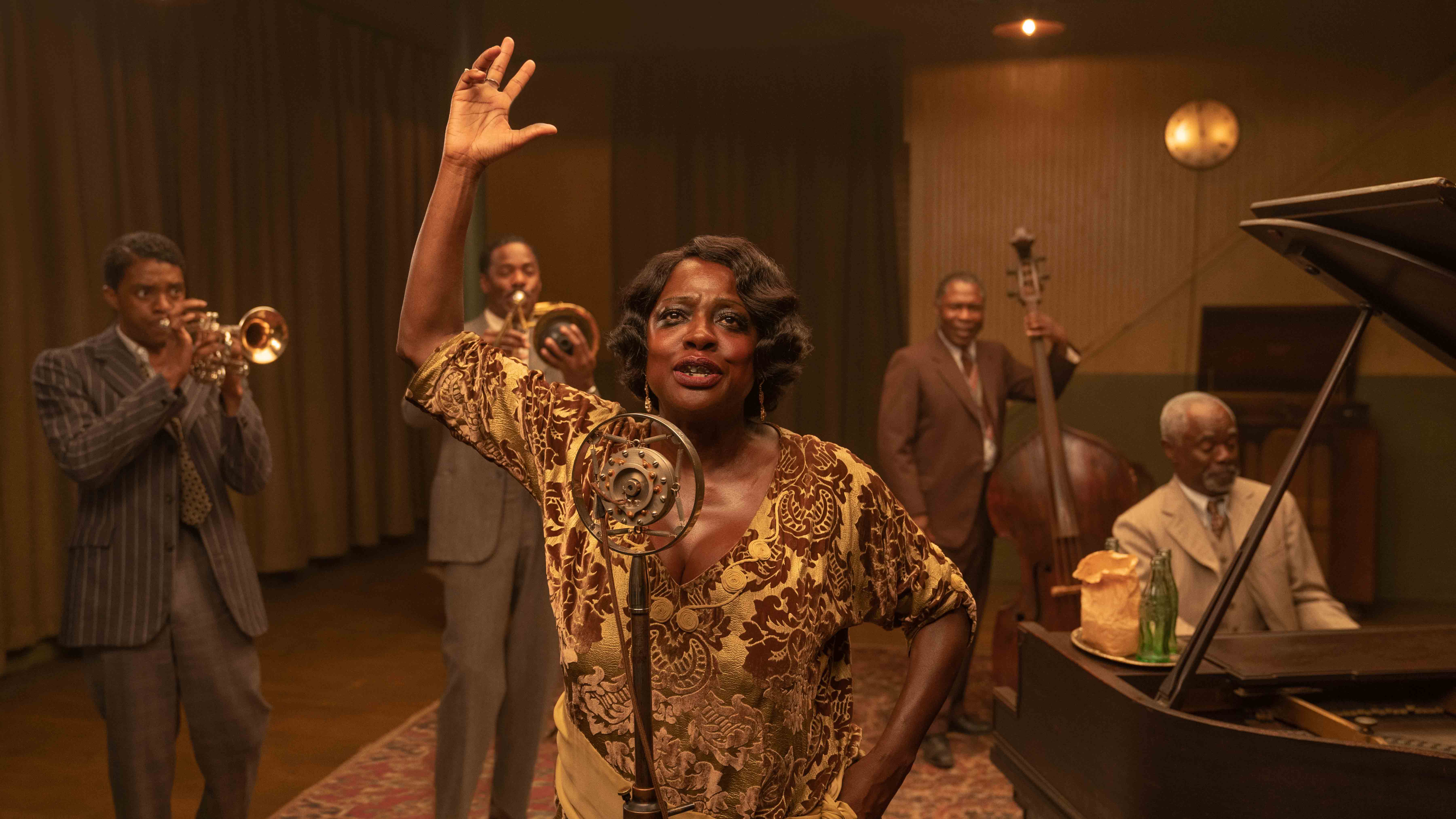 A last word about Black backsides. Wilson doesn’t milk the title for cheap laughs; at one point, Ma threatens to “carry my black bottom on back down South to my tour.” Aflame with contempt and shame, Levee pulls a switchblade and howls at Cutler, “Jesus hate your black ass!” The title song reminds us that Black folx, entertainers and otherwise, have had to monetize their otherized anatomy for centuries: Saartjie Baartman in the century before Ma, and Megan Thee Stallion a century after. How much autonomy and power these different women wield varies from age to age, but the paying public is constant in admiring those bluesy, twerking Black bodies. Admiration has its limits, though; when they get uppity in the studio or take a bullet in the foot, their pain becomes mere sideshow.