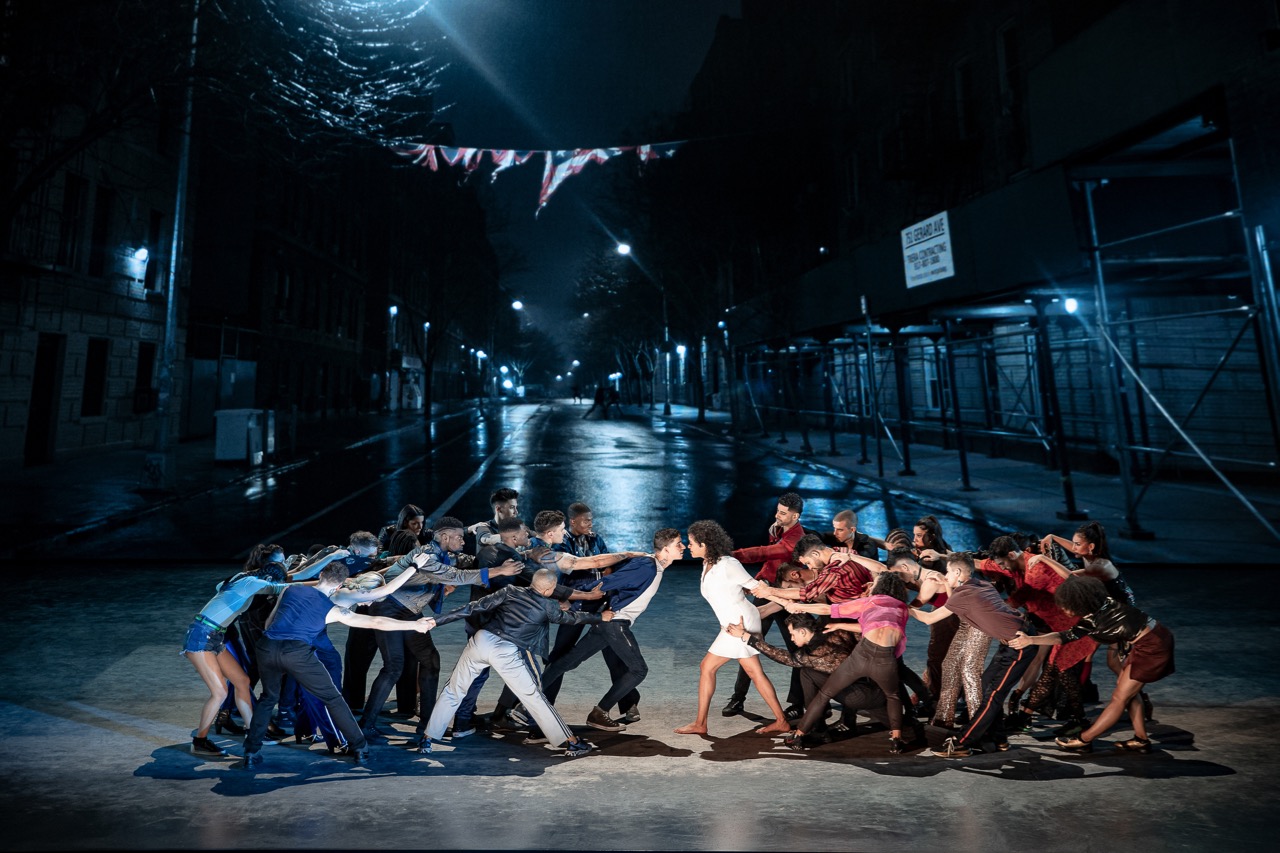 West Side Story, by Arthur Laurents, Leonard Bernstein, and Stephen Sondheim, based on a conception by Jerome Robbins, Broadway Theatre, 1681 Broadway, New York City, through September 6, 2020

No surprise the urge to decolonize West Side Story in 2020. Here’s a tale of young love destroyed by a gang war between Puerto Rican immigrants and white thugs, written by upper-middle-class, male, Jewish artists (borrowing Shakespeare’s Italianate drag, Romeo and Juliet). Leonard Bernstein’s glorious pastiche score marbles Latin rhythms and hep-cat jazz with the European operetta that Broadway composers had been recycling since before Show Boat. Arthur Laurents’s dialogue has more grit than your typical 1957 book, but its arch, rhyming street lingo was hardly the fruit of close research. Young Stephen Sondheim, previewing a genius to come, delivered punchy, yearning lyrics, but even he (at the time) winced at the disparity between the team’s handiwork and social reality. Enabled by the middlebrow norms of the Eisenhower era and sealed up tight in the surging, ecstatic dance storytelling of Jerome Robbins, West Side Story was a masterpiece of cultural appropriation.

Sixty-three years on, what to do with a property that carries the dual mark of modern classic and dorky show you did in high school? Steven Spielberg’s solution is to churn out costly nostalgia (on screens in time for Christmas), despite the endurance of Robbins’s definitive 1961 film version. On Broadway, bankrolled by lead producer Scott Rudin’s millions, comes “minimalist” director Ivo van Hove, with his design partner Jan Versweyveld and rigorous, formalist choreographer Anne Teresa De Keersmaeker—all Belgian artists. To decolonize a problematic American musical for the young, woke, and media savvy, apparently we must look overseas. 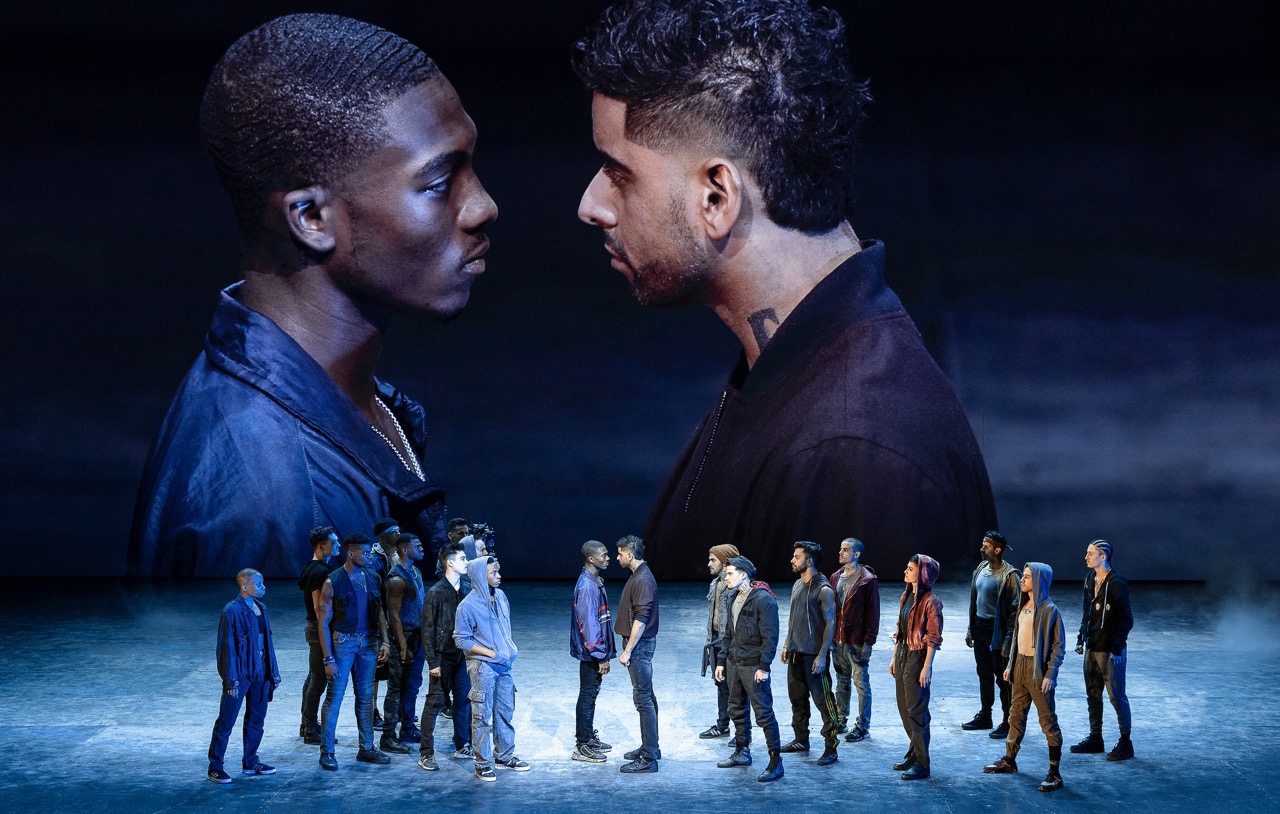 Dharon E. Jones as Riff, Amar Ramasar as Bernardo, and the cast of West Side Story. Photo: Jan Versweyveld.

Despite the preponderance of foreign talent in the core team, onstage the optics are all-American: the wide, dance-friendly stage of the Broadway Theatre is filled with young faces of color—and not just Latinx. Van Hove scrambles our racial signals, so that an integrated group of Black and white actors (the Jets, typically white) stares menacingly dead-eyed at the Puerto Rican one (the Sharks). Although Latinx actors play Sharks, the message is clear: ethnic signifiers are not to be trusted. (One thing the characters share is a fondness for leather and face and neck tats—the temporary ink designed by Andrew Sotomayor.) This racial blurring also claps back at the current immigration discourse, the right’s fear of brown hordes pouring over the border. Black and white Jets targeting “spics” suggests learned pathology, how white supremacy works: it keeps you poor and at each other’s throats. 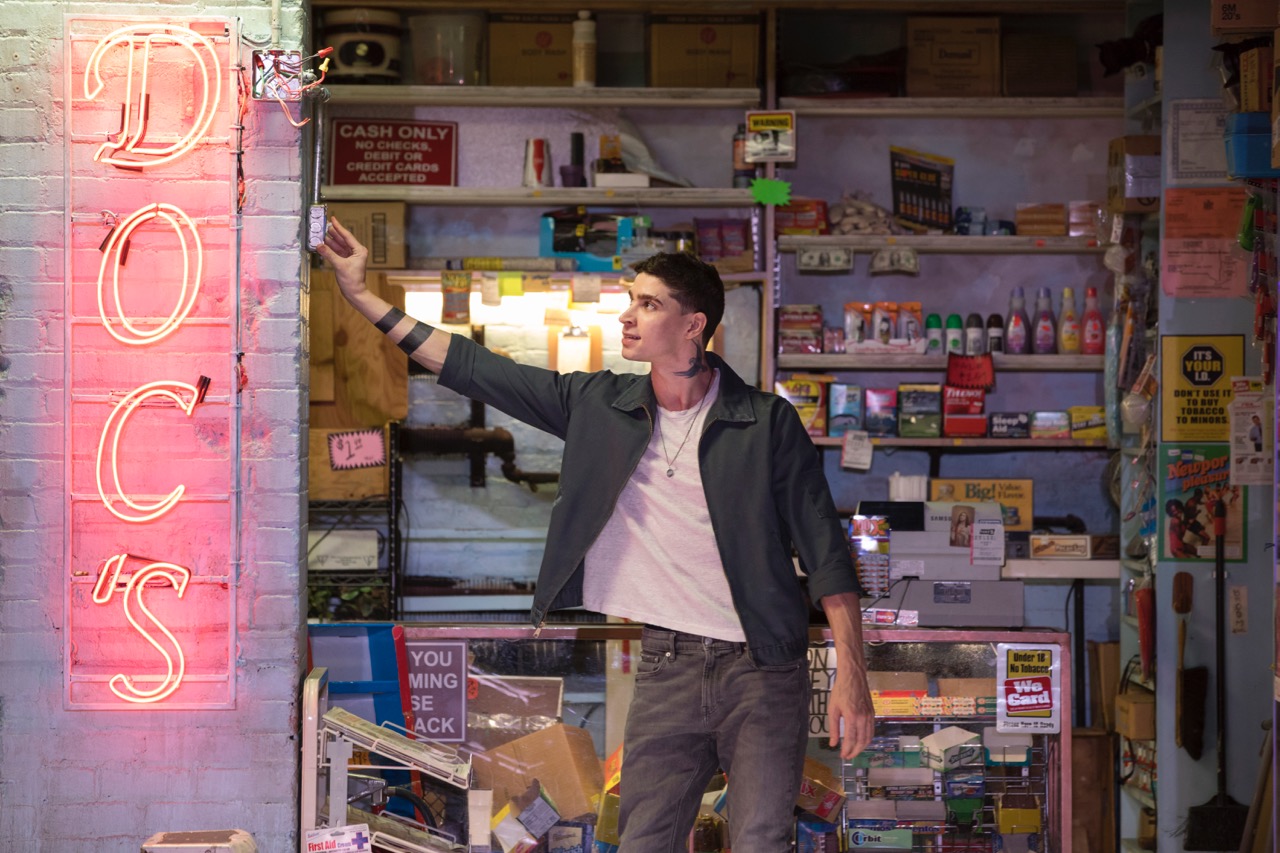 The next knock to tradition is Van Hove’s integration of monumental video. A seventy-foot-long jumbo screen dominates the back wall, displaying prerecorded footage of Jets and Sharks roaming midnight streets in slow-motion or, as live camera operators take the stage, cinema verité scenes inside meticulously dressed interiors nested upstage and partly out of view. This looming video commentary evokes the dreamy yet lucid installations of filmmaker Kahlil Joseph, whose style vibrates between documentary and home movie. The ingeniously staged and shot live sequences occur in Doc’s drugstore, where ex-Jet Tony (Isaac Powell) stocks shelves, and the bridal shop where Maria (Shereen Pimentel) toils with her friend, Anita (Yesenia Ayala). Anita is dating Bernardo (Amar Ramasar), Maria’s brother and the leader of the Sharks. Bernardo’s counterpart among the Jets is Riff (Dharon E. Jones), Tony’s friend. When Riff asks Tony to rejoin the Jets at the school dance for old times’ sake, the reformed gangbanger is reluctant, but agrees. At the dance, he meets Maria and they fall instantly in love, but their happiness is fatally intertwined with the escalating violence between the gangs. 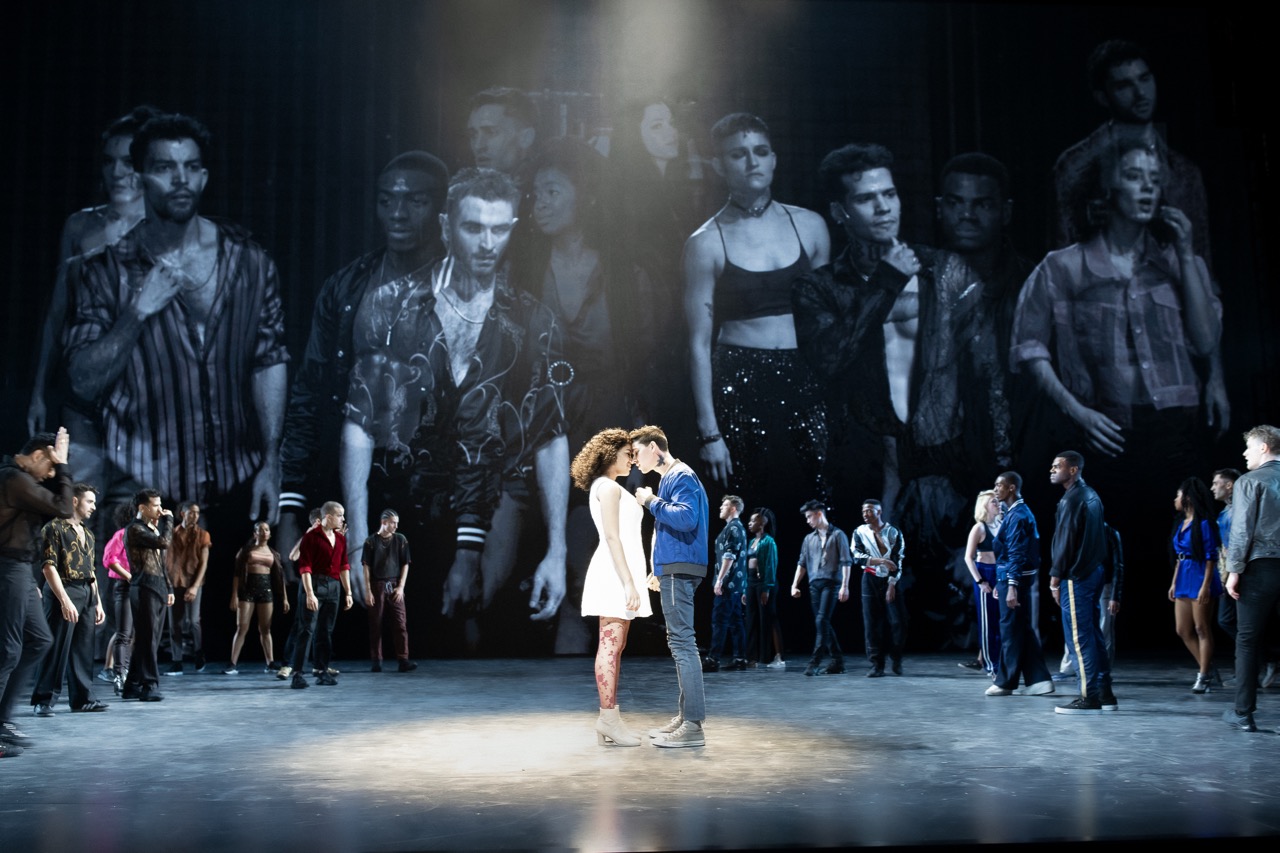 Shereen Pimentel as Maria, Isaac Powell as Tony, and the cast of West Side Story. Photo: Jan Versweyveld.

The most radical excision from the original are Robbins’s dances and staging. Gone are the Jets’ running, crouching leaps and athletic airborne skirmishes; if anyone snapped their fingers, I missed it. Out with the dramaturgical cohesion that Robbins supplied with his through-choreographed approach, smoothly morphing from pedestrian cool to modern ballet flamboyance. Absent too is intermission. Along with cutting “I Feel Pretty,” the “Somewhere” ballet, and other nips and tucks, the evening zooms along at 105 minutes. It’s a smart move by Van Hove, since the action takes place over forty-eight hours, to make the piece roll with heedless velocity to its bloody, tragic finale.

But does this chilly, imported formalism and multimedia dramaturgy work against the old-fashioned, melodramatic source? Yes, if you accept that Van Hove and De Keersmaeker, along with video designer Luke Halls and Versweyveld on lights and set, are not building a naturalistic, narcotizing illusion, but treating each scene like a technical and ideological puzzle that happens to include gorgeous music and charismatic young performers. Then you can begin to appreciate the tension. 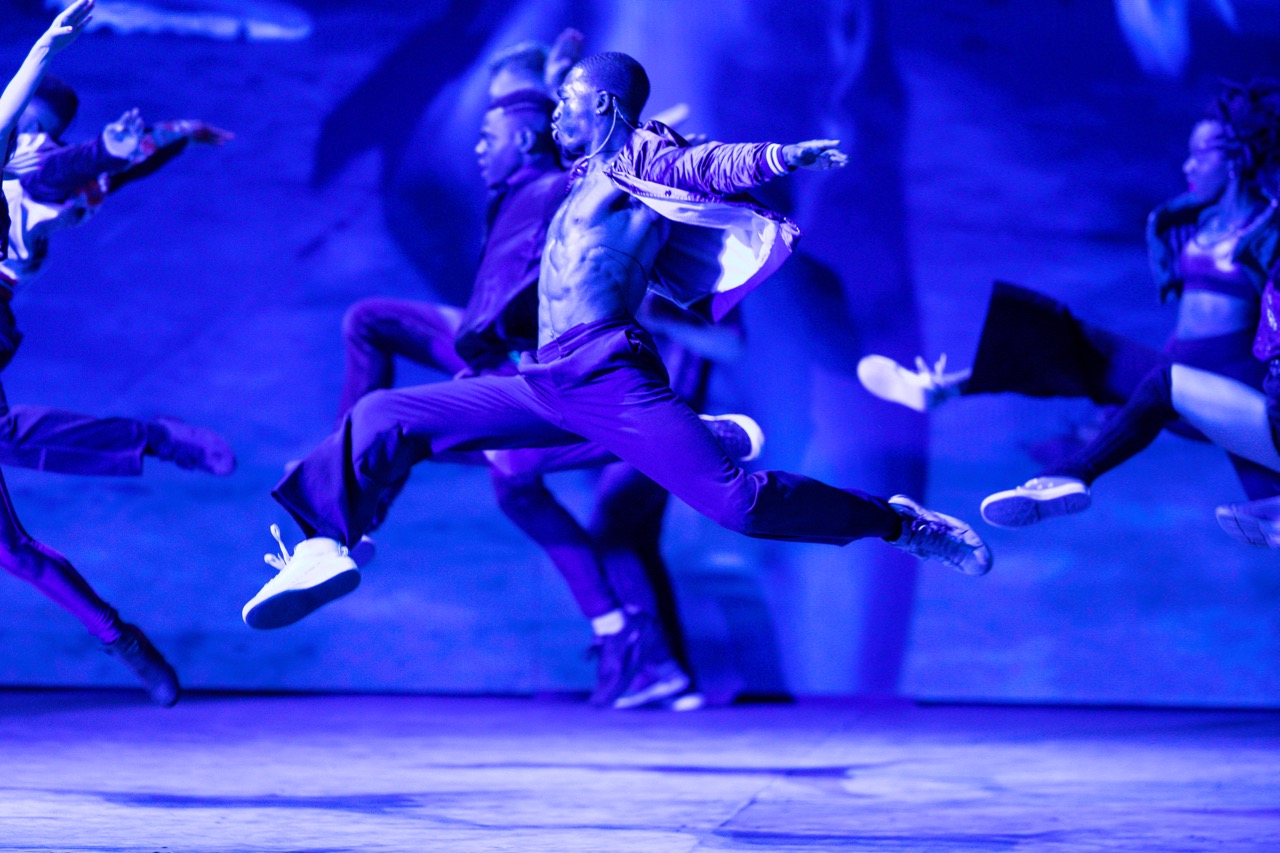 Dharon E. Jones as Riff and the cast of West Side Story. Photo: Jan Versweyveld.

I mean the tension in the narrative, which is still human enough to engender sympathy—but also the palpable tension between the historicity of the material and the rigor of the treatment. Van Hove lets dreamboat Powell and plucky, honey-voiced Pimentel be exactly as charming as romantic heroes should be. And, apart from the aforementioned cuts, he doesn’t interfere with the score, conducted with admirable verve and brawn by Alexander Gemignani. But he does continually pivot to new combinations of dance, prerecorded video, live video, or no video to keep us on our toes and tuned in to the political undercurrent of each scene. The climactic Jets and Sharks rumble is a primal highlight, filling up the bare stage as rain pours down on the shirtless fighters illuminated by low-pressure sodium lamps. This unique, mustardy lighting drains color from the actors’ sculpted torsos and rippling arms; we’re witnessing a monochromatic scrum of statuary, where skin tone no longer matters, just the urge to connect and bleed. It’s a spectacularly apt use of lighting to aestheticize, eroticize, fetishize, and criticize. 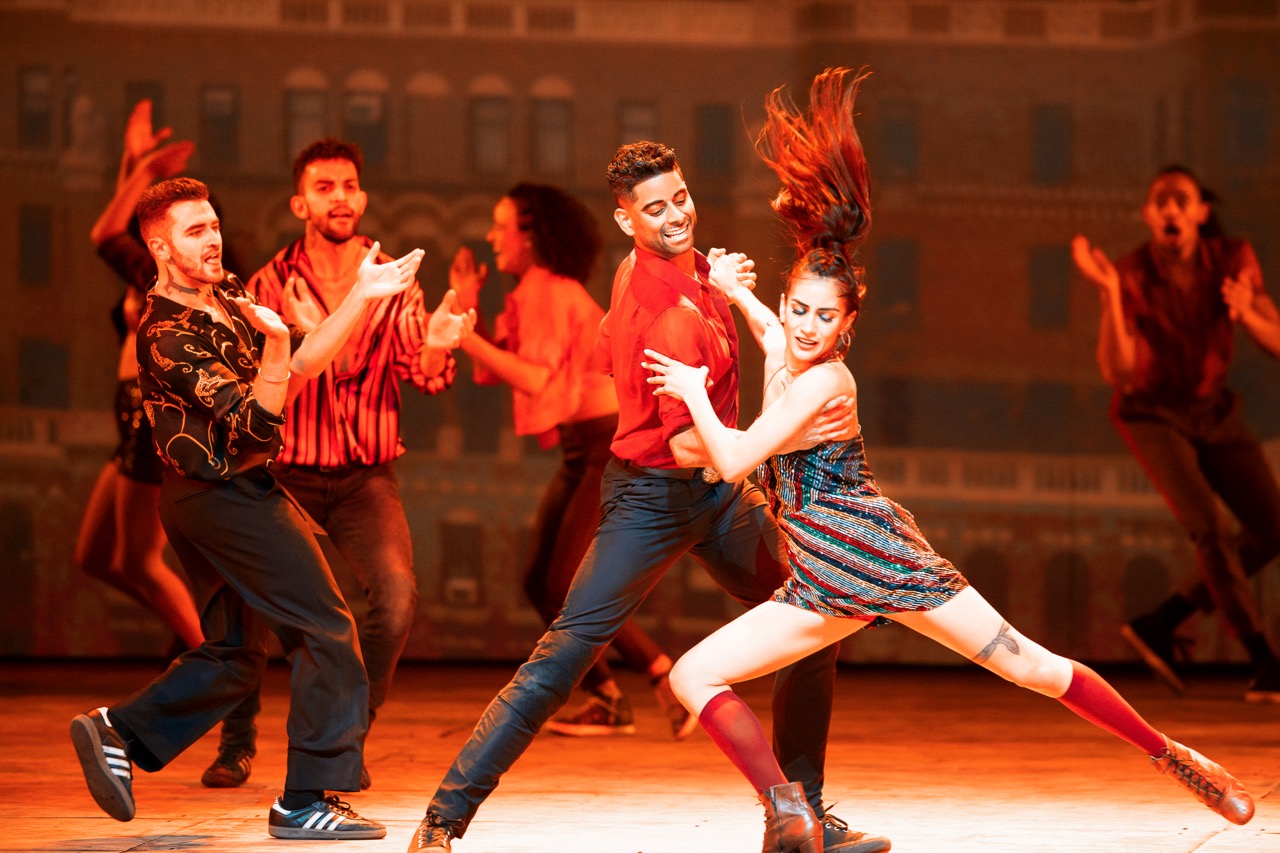 Amar Ramasar as Bernardo, Yesenia Ayala as Anita, and the cast of West Side Story. Photo: Jan Versweyveld.

During the famous “America” number, in which the Sharks and their girlfriends trade taunts about how wonderful/horrible their adopted home is, the video screen is filled with shots of Puerto Rico beaches and houses. As Bernstein’s crazy Latin rhythm builds to its foot-stomping finish, the mini-doc ends with a long panning shot of the border wall between Mexico and the US. Puerto Ricans are not Mexicans, but point taken in our present moment. “Gee, Officer Krupke” is a dated vaudeville romp, in which the Jets sneeringly mock the judges, shrinks, and social workers who shuttle juvenile delinquents to jail, dead-end jobs, or the loony bin. And yet, as the punks belt their lines with rage, behind them video shows cops busting into a Black teen’s room, guns drawn, and a final shot of a candle memorial for another Black victim—no doubt unarmed—of police violence.

In terms of visual splendor and kinetic force, shaking a classic and demanding it speak loudly and clearly to the present—to justify its canonicity, if you will—this West Side Story is a magnificent achievement and dense, intense, rewarding viewing. The collision of high-tech media and raw space, the sensual staging of bodies as sculpture, the freshness of the cast (thirty-three Broadway debuts), all keeping time with Bernstein and Sondheim’s heart-filling score—this is what classics look like in a healthy theater culture. They’re not neat, neutered museum exhibits; they still hide a rocket in their pocket.

David Cote is a theater critic, playwright, and librettist based in Manhattan. He reviews theater for Observer. His operas have been produced in New York, Cincinnati, Chicago, and London. He was the longest serving theater editor and chief drama critic for Time Out
New York.