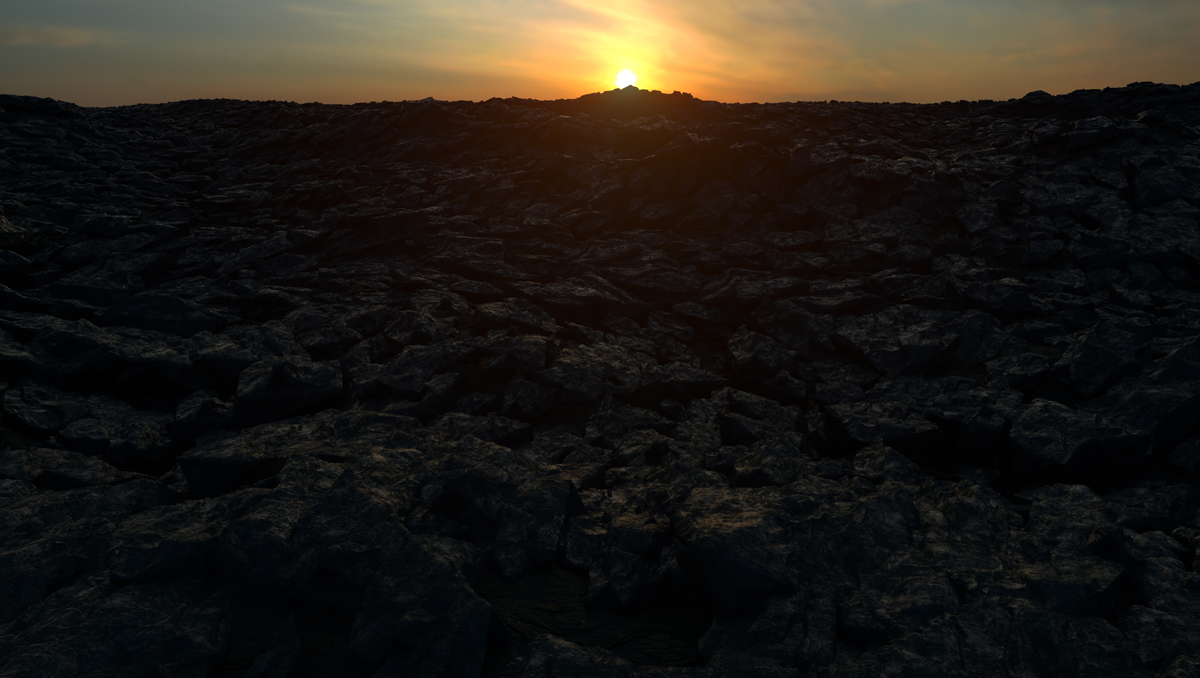 A sea roils. But it’s not quite a sea. It’s more viscous than that: tarry like crude oil. Filled with blackened clumps and fragments that resemble chunks of asphalt, it exists in a state between liquid and solid, like half-cooled magma. It’s not quite a sea, too, because it doesn’t have the smooth energy of waves. On the one hand, it’s organic, akin to a surface of reptilian scales shifting as they move; on the other, it feels mechanical, rising and falling as if a million hydraulic lifts are repositioning a million pieces of . . . stuff. But even the nebulous term stuff feels wrong: it doesn’t convey the simultaneously visceral and immaterial quality of what we see. Waves continue without end, but occasionally—jarringly—they reverse for a moment. Above the horizon, a sun hovers; the sky changes from a gaseous yellow haze to a crystalline, bluish white. These color shifts are not enough to tell us if it is dawn or dusk, though—time makes no sense here. We could be looking at the earth being formed, eons ago, or at the aftermath of an all-too-imminent ecological disaster—a postapocalyptic, even post-human world in which life means something very different than what we imagine it now to be.

Arthur Jafa’s new film AGHDRA (2021), on view for four weeks in the cavernous space that used to house Gavin Brown’s Enterprise, is a departure from the artist, filmmaker, and cinematographer’s previous films, including the Love Is the Message, the Message Is Death (2016), which debuted five years ago. Love Is the Message captured the imagination of so many who were looking on in horror as the anti-Blackness that permeates this country’s histories and institutions became excruciatingly apparent. (For others, it was, depressingly, no surprise.) Jafa dug deep into his vast collection of found images and video clips to create a work that was simultaneously a celebration of Black life, a mourning of Black death, and a reminder of Black perseverance and survival in the most inhospitable environments. AGHDRA carries on those themes, but now in the realm of near-abstraction. Collaborating with BUF, a French company specializing in computer-generated images, best known for their work on The Matrix, Jafa has concocted a digitally animated, eighty-five-minute film of deceptive simplicity that is truly and genuinely sublime in the Romantic sense: terribly beautiful—beautiful despite the terror, terrible despite the beauty. A beauty so intense that it forces us to confront death. 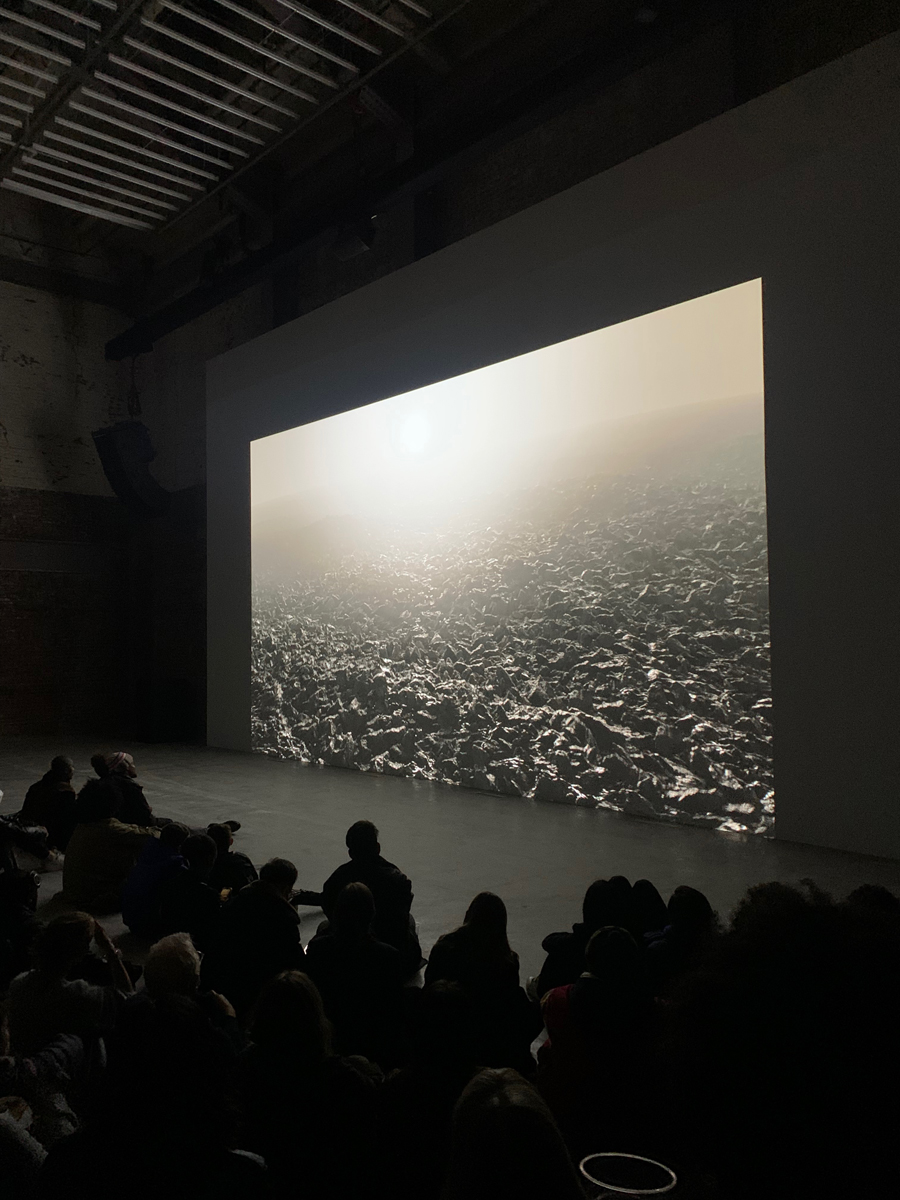 In a recent interview with the Canadian Black-studies scholar Rinaldo Walcott, Jafa recounted one of the origins of the piece: his then-sixteen-year-old son and a friend went to see Godzilla in a theater in Tokyo. “They went and saw it, and they came out, and said, what was that about. I said, ‘Japanese people are the only people who have ever had A-bombs dropped on them, and Godzilla was an attempt on some psycho-social level to embody the trauma of that experience.’ And I started to think, well, what would that look like if we tried to embody black experience in non-narrative terms, but in some other sort of way.”

The result is a film that can be best described as relentless, which seems an apt way of conceptualizing life in an anti-Black world: the waves—of the legacy of the Middle Passage, of the traumatic afterlife of slavery, of state-sanctioned anti-Black violence, of daily microaggressions—just keep coming. Sometimes they swell to tsunami-like proportions, entirely obscuring the horizon line and the weakened sun, but they never crest and crash, a fact that provoked an anxious, almost panicked response in me as I watched. In AGHDRA, there is no climax, no atomic bomb, no seism that might shock us back into our humanity even for a moment. There is just endless, gut-wrenching, but still gorgeous churning. 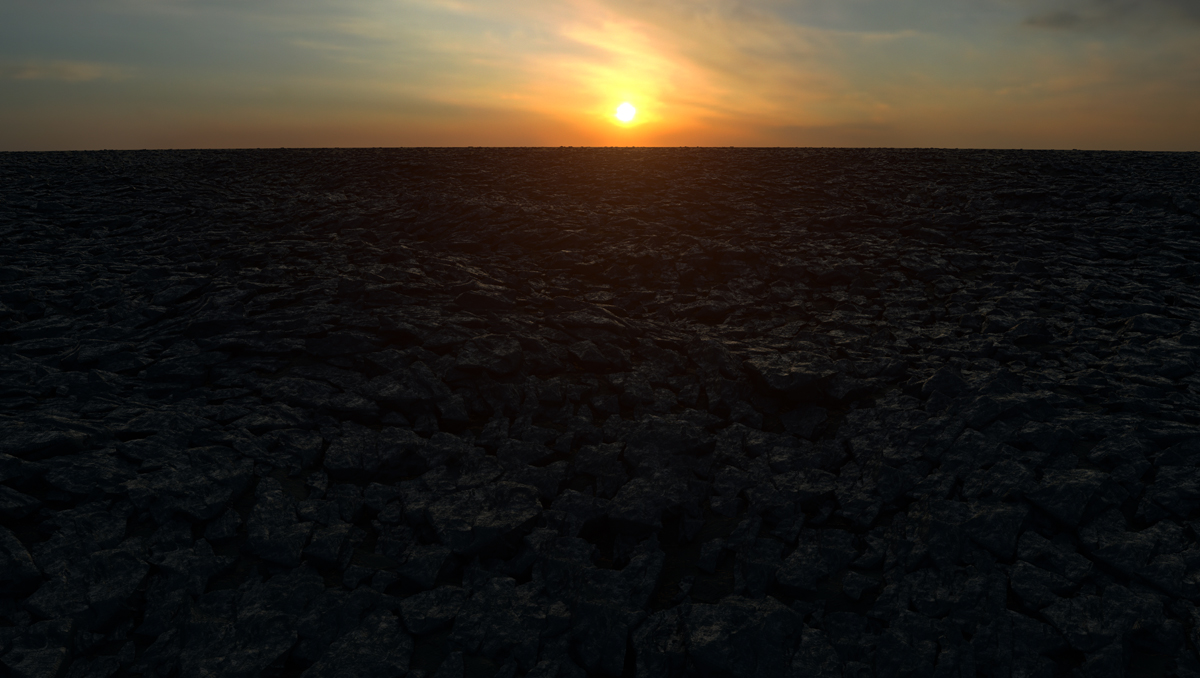 The gut-wrenching part—the evocation of the somatic experience of living in an inescapable condition of anti-Blackness—is reinforced by the soundtrack, which booms over hidden speakers. The title of the piece, a mash-up of monsters’ names like Godzilla and Mothra with Agharta, a concert album by Miles Davis recorded in Osaka in 1975, points, as always, to the importance of sound in Jafa’s work. Alternating with a loud, buzzing white noise that settles in your pelvic floor, composed and performed by bass player Melvin Gibbs, are a variety of songs performed by Black artists, slowed and distorted so that they are, if not quite unrecognizable, made so strange as to be hard to pin down. With the help of film scholar Michael Gillespie, I managed to identify a few: the Friends of Distinction’s “Going in Circles,” Isaac Hayes’s “Walk on By,” the Isley Brothers’ “Hello It’s Me,” Rose Royce’s “Love Don’t Live Here Anymore.” Alongside the imagery, the seemingly anodyne love songs transform into something far more existential, scenes from a life that is all but unbearable: “You abandoned me / Love don’t live here anymore”; “If you see me walking down the street / And I start to cry each time we meet / Walk on by, walk on by”; “I’m an ever rollin’ wheel, without a destination real,” or “I’m a faceless clock, with timeless hopes that never stop.”

The beautiful paradox, of course, and an idea that Jafa comes back to over and over in his work, is that out of despair—a despair tracing back to America’s original sin, the enslavement of millions of Black people—has sprung Black popular music, arguably the most important art form of the twentieth and twenty-first centuries, and a vehicle for Black liberation. It’s this ability not just to adapt to conditions that do not support Black life but to create out of them that Jafa identified as the source of America’s cultural fascination with Blackness, as he explained in a 2019 interview in i-D magazine: “What makes us so powerful, what everyone’s arrested by, is how we’ve demonstrated, again and again, a capacity not just to survive but to thrive, in the most problematic circumstances; global capitalism, migrant crisis, eco disaster, white supremacy. It’s why blackness matters to everyone. Because we’re what the future looks like, that’s undeniable.”

In multiple interviews, Jafa has expressed ambivalence about the way Love Is the Message, The Message Is Death was embraced so fervently by (mostly white) art audiences, who largely saw it simply as an inspirational. But it was, I think, something much different, and much tougher: among other things, it was an instruction manual for non-Black people having to face realities— Jafa’s “most problematic circumstances”—from which we have, depending on our place on a sliding scale of white privilege, been relatively insulated. Love Is the Message slyly asked “Who are you going to listen to, the people who got us into this mess or the people who survived and continue to survive it?” and challenged audiences to disengage from whiteness in the process. The same is true for AGHDRA, a work that alludes in its very form to unnamed but ominous travails to come. How will we—as individuals, as a species—learn to swim in this sublime ocean, one that is both life-giving and life-taking, and endure?

Aruna D’Souza is a writer based in Western Massachusetts. She co-curated the 2021 exhibition Lorraine O’Grady: Both/And at the Brooklyn Museum of Art and is the editor of a forthcoming collection of the writings of Linda Nochlin, Making It Modern (Thames and Hudson, 2022). She is also a contributor to the New York Times. She was awarded the Rabkin Prize for arts journalism in 2021.