Dystopic fever dreams, 2017: the personal and political wrestle it out in the artist’s rebellious new show. 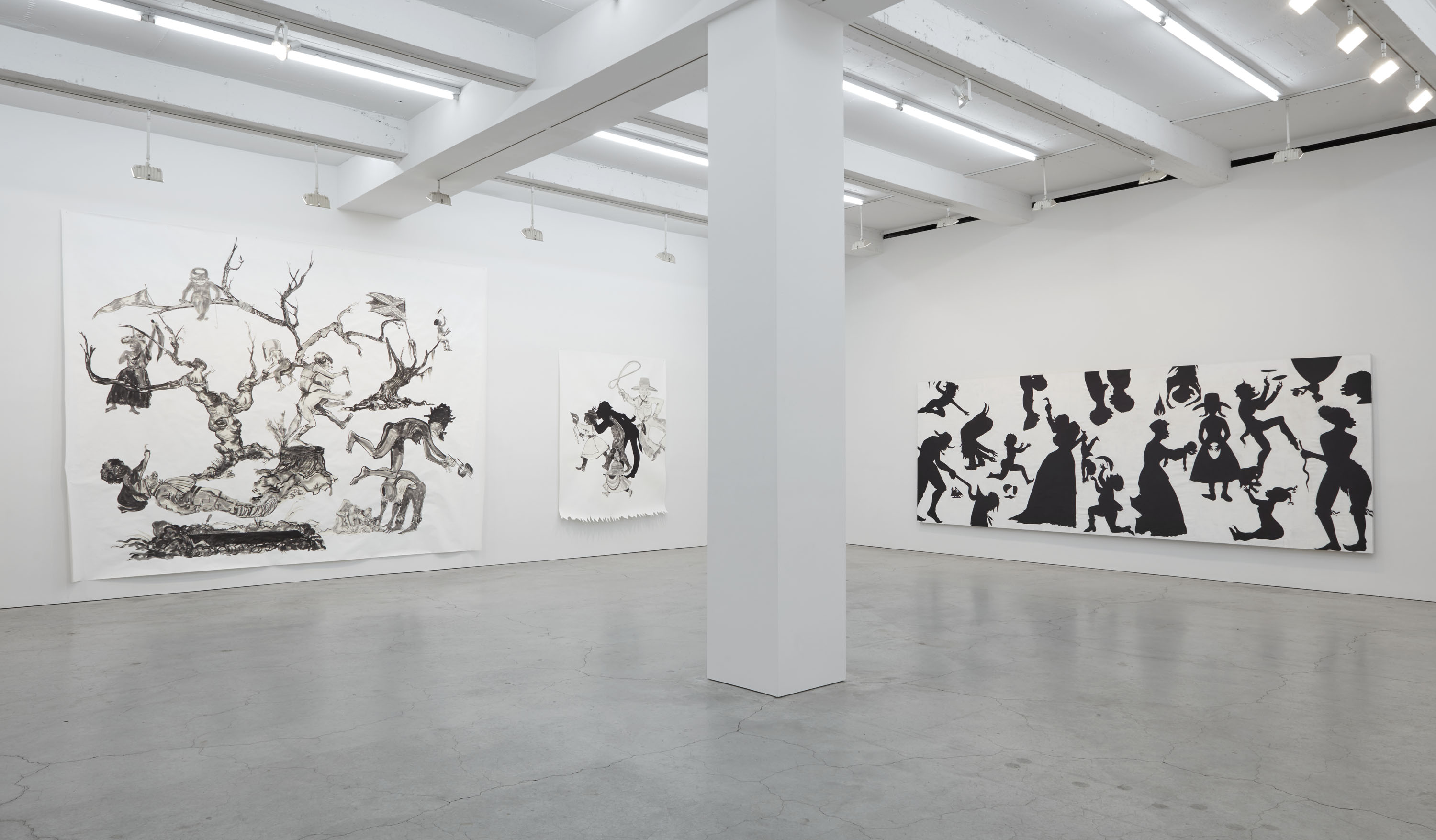 Before we saw the art, we saw the hype: a press release, consisting of two seemingly mismatched parts, which circulated widely and even garnered an article in The New York Times, announcing Kara Walker’s exhibition of new work at Sikkema Jenkins. First came the hilariously baroque title of the exhibition—two hundred words long!—enumerating, in the voice of a sideshow barker (or maybe a slave market auctioneer), the wonders and bargains awaiting the viewer and the predictable reactions that would ensue: “Scholars will study and debate the Historical Value and Intellectual Merits of Miss Walker’s Diversionary Tactics. . . . Parents will cover the eyes of innocent children.” This is peak Kara Walker, who is a trickster at heart: stirring up controversy among an audience primed to be outraged by her disturbingly ambiguous intermingling of racist stereotypes, sexual violence, and orgiastic perversities. 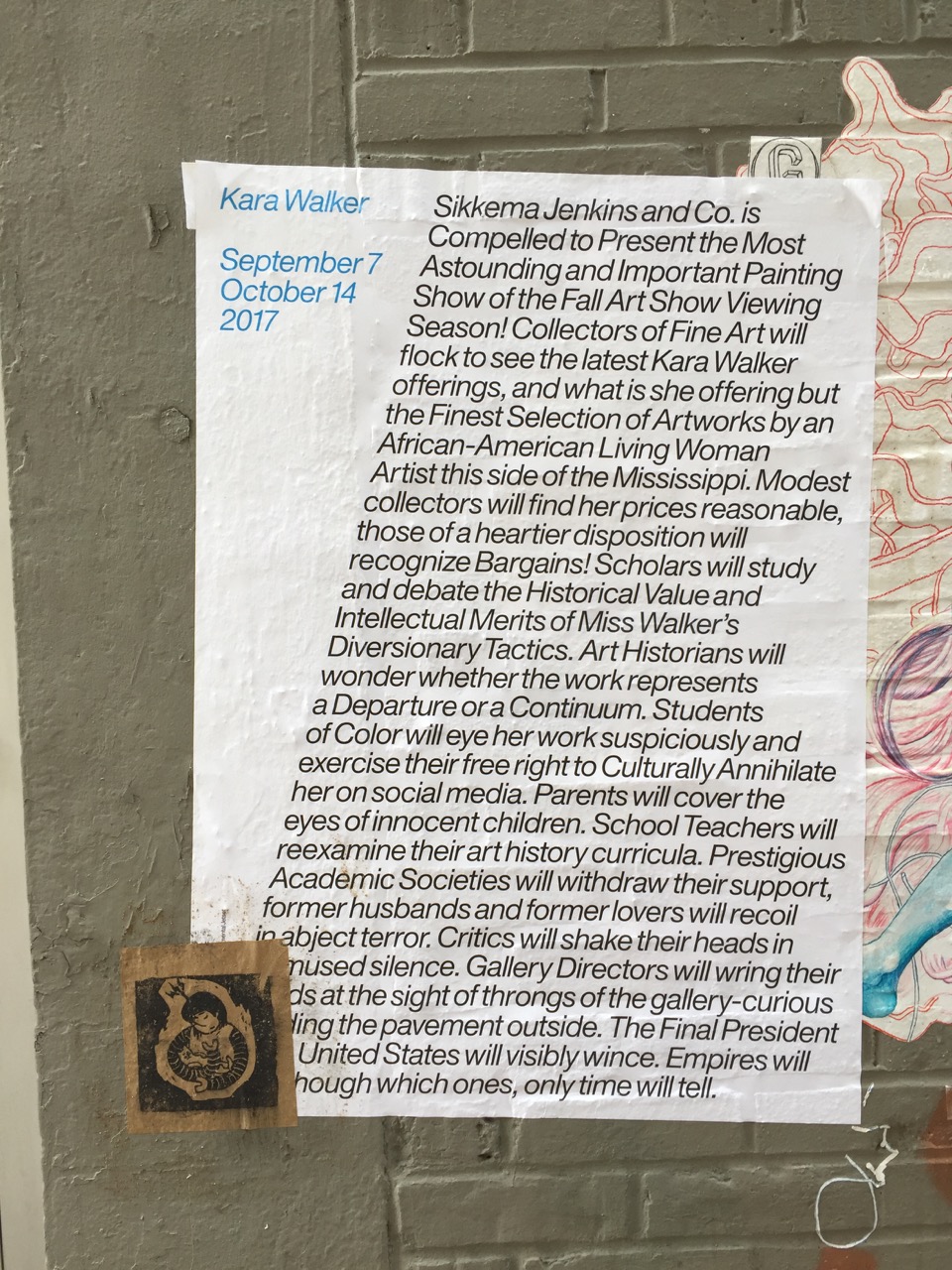 Next, and taking a sharp reversal of tone, was Walker’s artist statement—written in the aftermath of Charlottesville—countering the bombast of the show’s title with something much more personal: an exhausted, almost defeated, declaration of refusal. “I know what you all expect from me and I have complied up to a point,” she writes. “But frankly I am tired, tired of standing up, being counted, tired of ‘having a voice’ or worse ‘being a role model.’ ” With a world-weary sigh, Walker wants to reclaim her time, to no longer play Cassandra in a country so drunk on white supremacy that it can no longer see what’s always been apparent: “I roll my eyes, fold my arms and wait. How many ways can a person say racism is the real bread and butter of our American mythology . . .”

The stakes were high for Walker’s first major exhibition in New York City since her 2014 installation in a defunct Domino factory of a massive sphinx with a mammy’s kerchiefed head. Made from thirty tons of bleached-white sugar, the immensely popular work attracted 130,000 visitors and went viral online. With this in mind, the advance publicity for the new exhibition seemed both defensively self-protective and vulnerably intimate—a plea by an artist who knows much is expected from her and just wants to put her head down in her studio. This tension echoes the paradox at the heart of Walker’s work, which has always mined the history of American anti-blackness in a way that is urgently public and deeply personal: her art is as much about Walker’s own confused pleasures, desires, and horrors when it comes to the imagery of slavery and minstrelsy as it is about America’s, even as she is consistently called upon by the (largely white) art world to unlock the perverse secrets of this country’s racial woes. 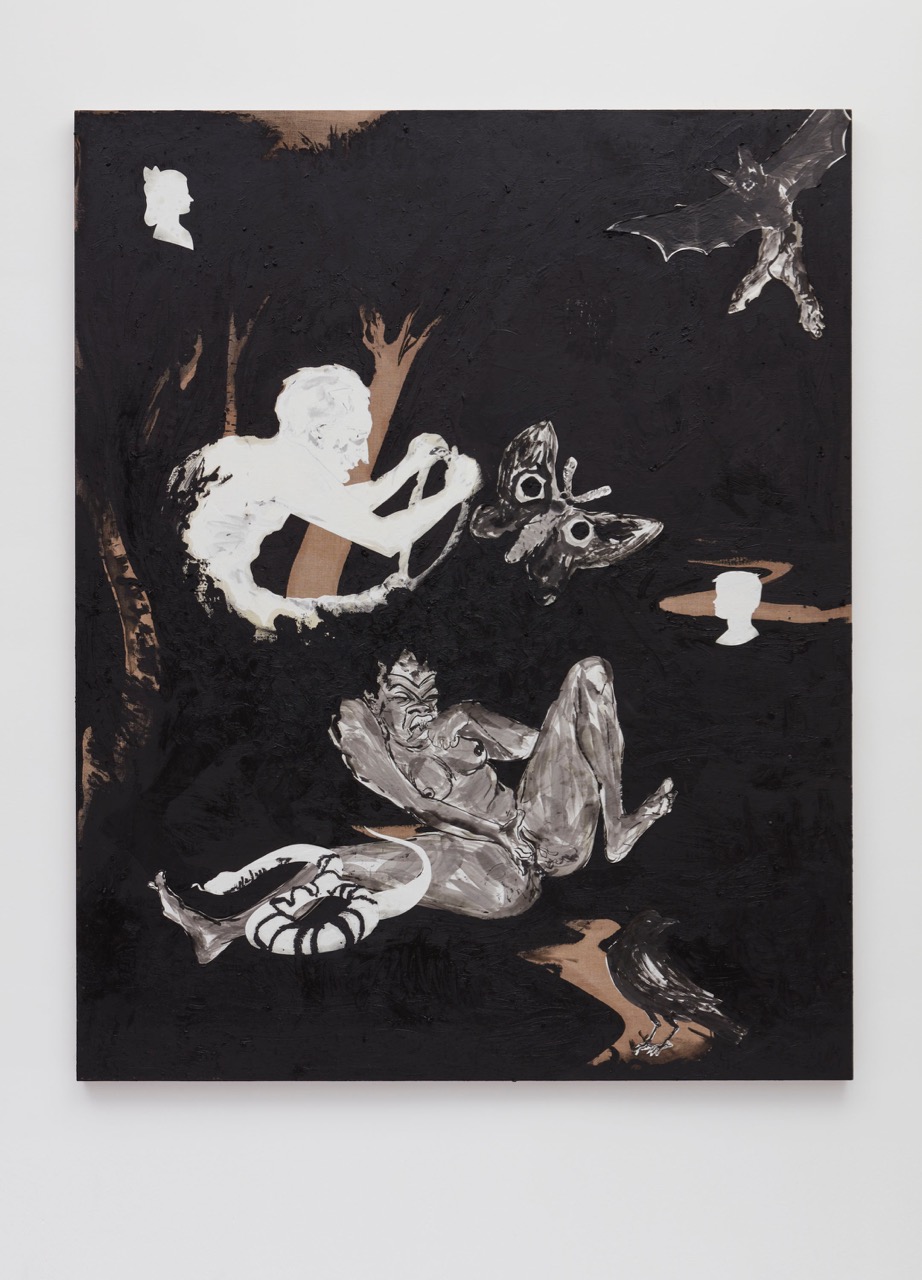 In one of the first pieces in the show, Walker lays bare the contradictions inherent in this quixotic project of insisting on art as a site of private exploration on the one hand and as a matter of the utmost political import on the other. Spooks (2017), like most everything on view, abandons her trademark black silhouettes for drawing, in this case using oil stick and ink. The shift foregrounds her hand, her touch, her investment in her subject matter in new ways, as well as ties her imagery more firmly to the history of art and to political cartooning and caricature. The splayed-legged woman in the foreground of Spooks is, if not a caricatured self-portrait, a surrogate for Walker herself (there are many of these “Kara Walkers” in the show); she pleasures herself, lost in the throes of the most private act of self-indulgence while, at the same time, on prurient display. A serpent coils at her feet, and a white-bodied man—Adam to her Eve—attempts to lynch a butterfly. This is a dystopic Eden worthy of Goya, who is indeed signaled by a bat flying overhead. Recall the famous image from the Spaniard’s series Los Caprichos of a man asleep at his desk while bats swarm above, “The sleep of reason produces monsters,” and you get a sense of what this show is to be about: the contradictions of using the masturbatory activity of artmaking to deal with the very real monsters that are rearing their heads at the moment, and a self-deprecating laugh at herself for even trying to do so while the whole world is watching. 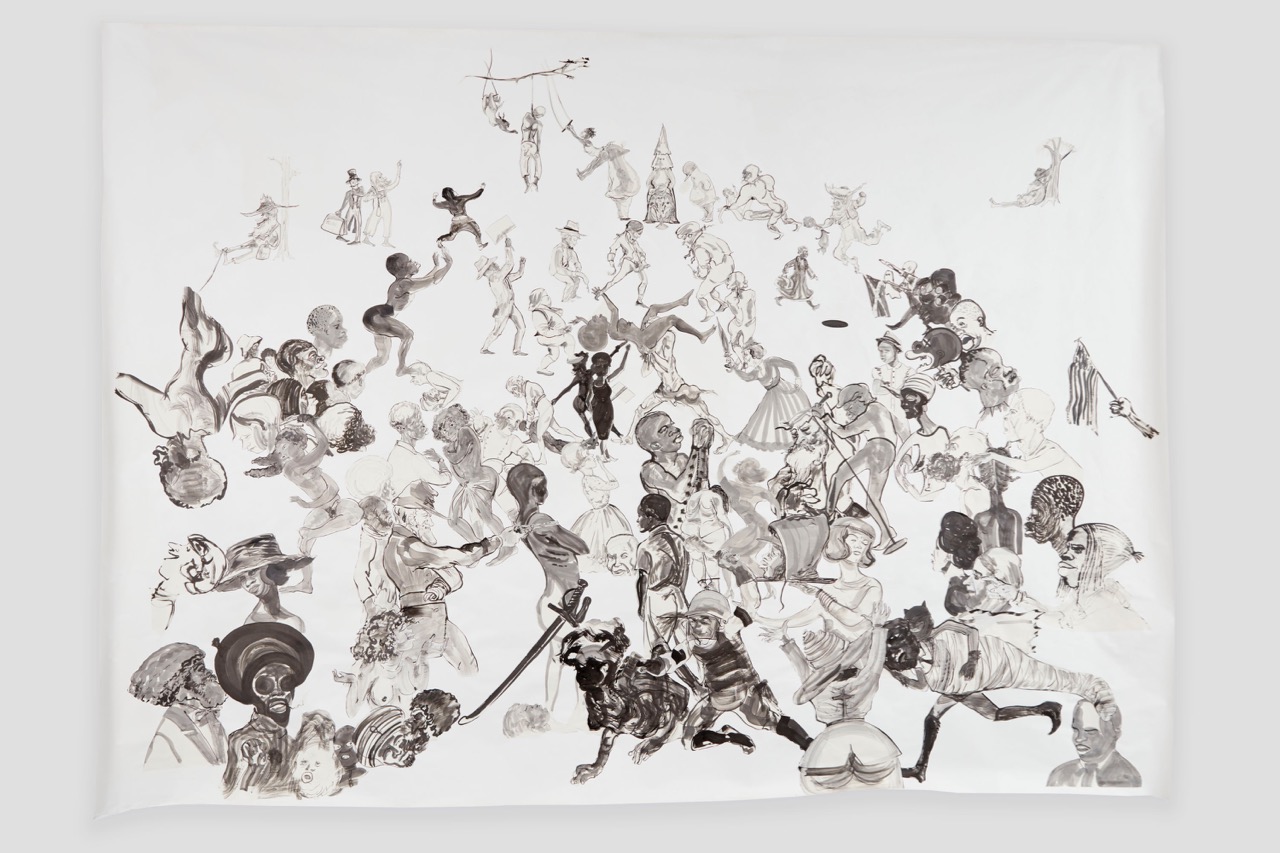 And trust: there is no lack of monsters, or their victims, in the twenty-odd works on view, which range from easel- to mural-sized works on paper, sometimes attached to the wall directly, other times collaged onto canvas. To her usual repertoire of plantation owners and hillbillies and mammies and pickaninnies, Walker adds, for the first time, contemporary references: images of Trayvon Martin’s head on a platter and police in riot gear make explicit (for those who weren’t paying attention) that the ideology that underpinned slavery and then Jim Crow never really went away, just shifted. The most striking (and largest) work in the show, Christ’s Entry into Journalism (2017), evokes James Ensor’s scathing takedown of political hypocrisy, Christ’s Entry into Brussels in 1889 (1888), in both mood and grandeur, and yet the parts that make up the whole seem sourced from Walker’s fever dreams. The figures are arrayed in a rough pyramid. At its base is an armored cop beating a black figure rendered as an almost unreadable mess of brushwork; its distant apex is occupied by a Klansman hiding a defecating woman under his skirts while, nearby, a lynched man and two acrobats swing from a branch. In this, as with so many other of the pieces—including the extraordinary Brand X (Slave Market Painting) (2017), done in oil stick on canvas—Walker seems to be tackling the question of her relationship to painting. Though in her artist statement she refers to the exhibition as a painting show, there are no actual paintings on the walls—and yet the medium, which has the capacity to render the most delicate intimacies as well as the most grandiose views of history, is constantly invoked. 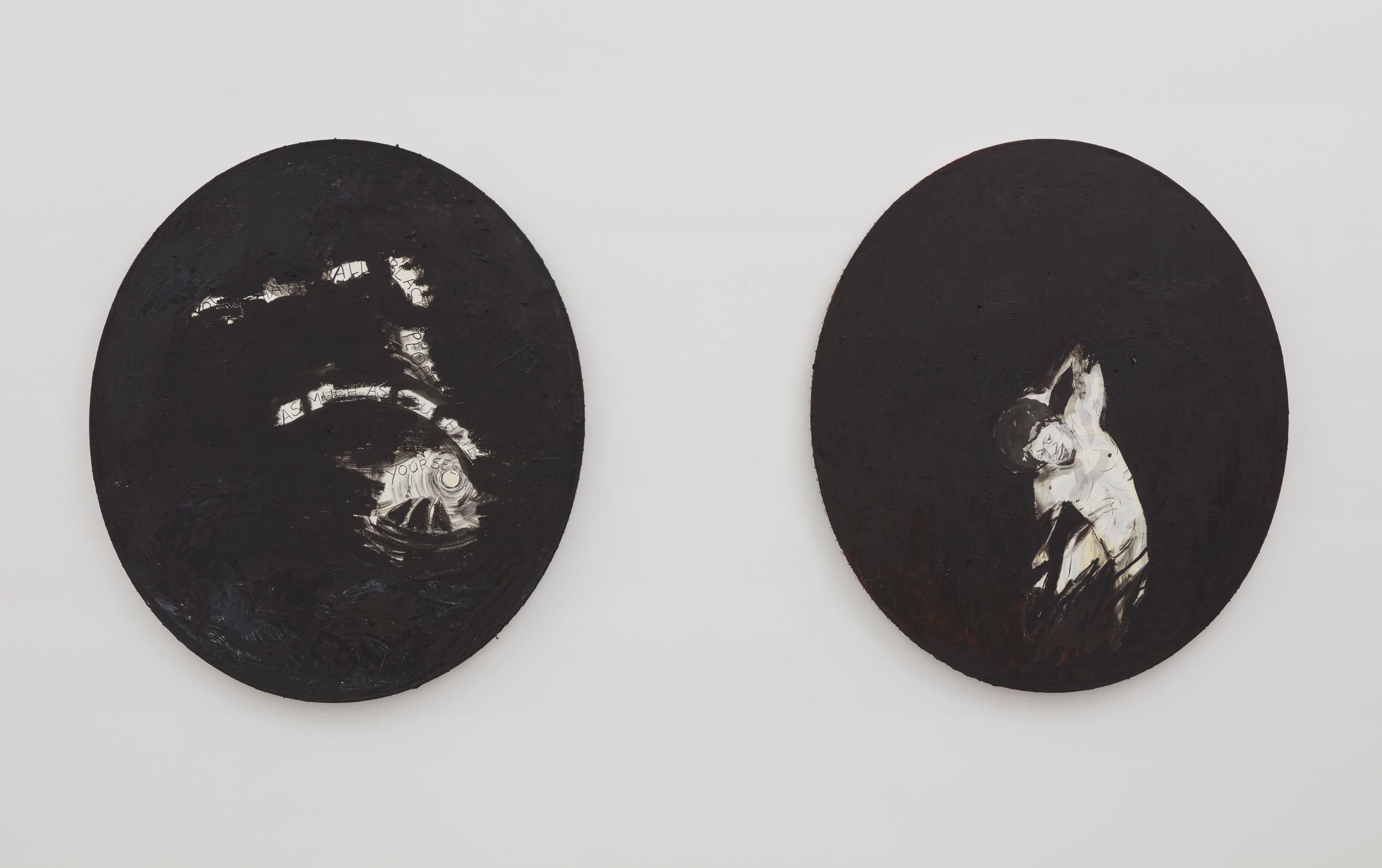 Kara Walker, Storm Ryder (You Must Hate Black People as Much as You Hate Yourself) and Dante (Free from the Burden of Gender or Race), 2017. Oil stick and Sumi ink on paper collaged on linen, 48 × 42 inches each. Image courtesy Sikkema Jenkins and Co. © Kara Walker.

A pair of oval canvases attests to the voices ringing in Walker’s head as she made this work. In Storm Ryder (2017), the surface is violently blacked out save for the traces of the phrase “you must hate black people as much as you hate yourself.” Read from the position of a white (or non-black) viewer, the phrase is an explanation, if we’re willing to listen, of racism itself. But read from Walker’s position—that of a black artist who has long been criticized from within the black community for her insistence on recasting images of racism through the lens of black desire—it is a biting attack. In the companion piece, Dante (Free From the Burden of Gender or Race) (2017), Walker exploits the possibilities of her medium by rendering a female figure—another surrogate, it seems—in negative, the white paper standing for the skin of a nude body at risk of being enveloped by a murky black ground. Yet, despite this reversal, the figure remains (to borrow words from Walker’s artist statement) “a (proudly) raced and (urgently) gendered person,” for, as the title suggests, to be free from those “burdens” would be its own kind of hell. The pairing, it seems to me, encapsulates the weariness that comes from a career spent trying to hold the intimate and the spectacular in proximity, despite their propensity to reject each other—an impossible dream that she insists on, from press release to finished work.

Aruna D’Souza is a writer based in Western Massachusetts. Her writings on art, feminism, culture, diaspora, and food have appeared in Bookforum, Art in America, Time Out New York, and The Wall Street Journal. She is currently working on a volume of Linda Nochlin’s collected essays to be published by Thames & Hudson, and is a member of the advisory board of 4Columns.