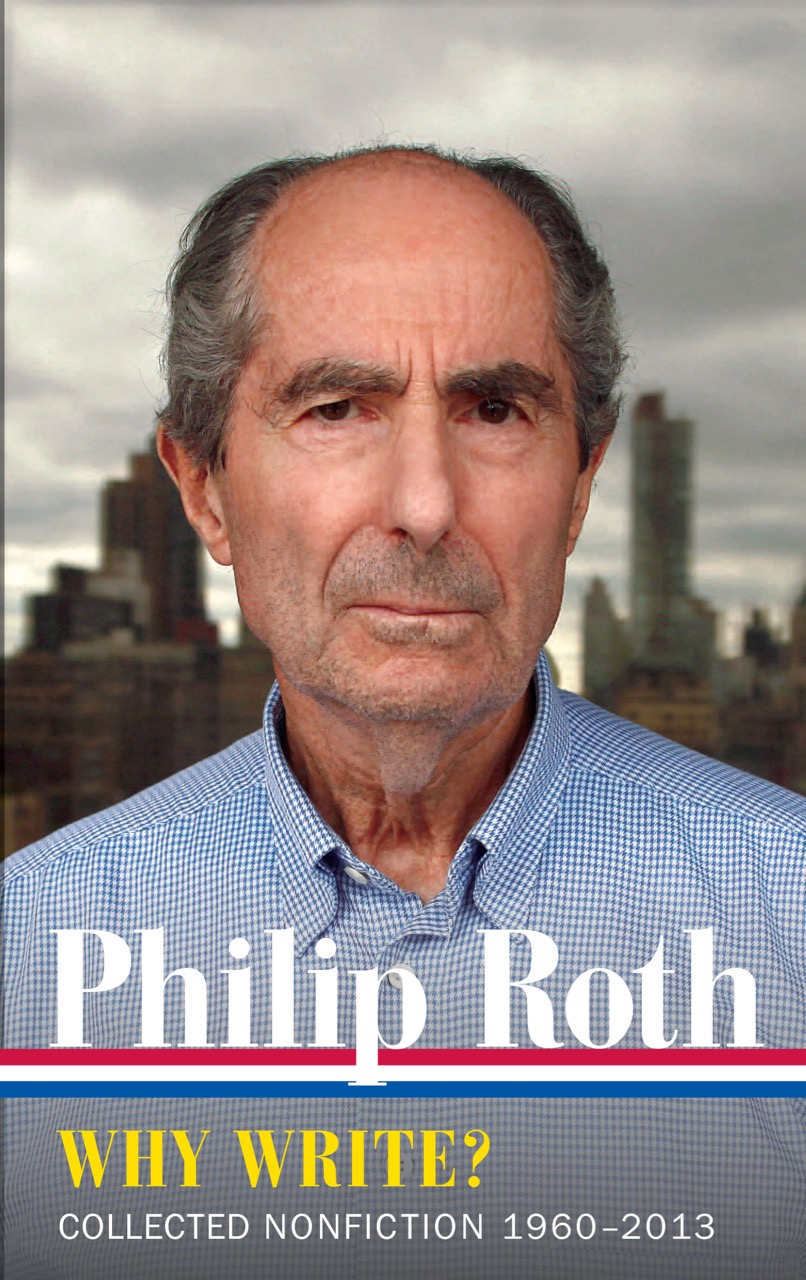 Writers love what they do, even when they hate it, and they usually do it up to the moment they die. But in 2012, at the age of seventy-nine, Philip Roth—one of the greatest American novelists—retired.

Why Write? Collected Nonfiction 1960–2013 is the tenth and final edition of Roth’s work from the Library of America, though a Library of America representative added, after affirming this fact, “Never say never.” Roth is, after all, still here.

The book functions as a kind of greatest-hits album in which Roth has made selections from two earlier collections of nonfiction—two-thirds of Reading Myself and Others is present here, and all of Shop Talk—to go alongside a third section, called “Explanations,” that gathers fourteen uncollected pieces, including six published here for the first time.

Roth is a hard hat, a hard head. (When Patrick Ewing was asked, upon his retirement, how he wanted to be remembered, those were his words. He added, “hard nose.” That may apply to Roth, as well. I’d like to be on record that Ewing and Roth had something in common. They were both giants who flew, but making it look easy wasn’t exactly their thing.)

An example of this hard hat, hard head attitude can be found in the deeply delightful essay, first published—in part—on The New Yorker’s culture desk website in 2012 under the title of “Errata.”

The part The New Yorker published was Roth’s letter to Wikipedia about correcting the entry for his novel The Human Stain, whose protagonist, Coleman Silk, is a professor accused of racism who turns out to be passing as white.

In a twist worthy of Kafka, or Roth’s Operation Shylock, or his incredibly entertaining postmodern novel The Counterlife (I challenge you to find, in literature, a better sex scene set in a New Jersey dentist’s office), Roth was told by Wikipedia that his letter of correction would not be considered valid unless it could be cited by a secondary source. In other words, you, Phillip Roth, are not a valid source for the intentions of Philip Roth. But if someone else publishes something—anyone, anywhere—about Philip Roth, it can be cited as a source.

So Roth sent his letter to The New Yorker to be published and therefore verified.

“Dear Wikipedia, I am Philip Roth,” is the deadpan opening.

Roth’s main argument is that he was not using the critic Anatole Broyard as the model for Silk, but rather his friend, the Princeton professor Melvin Tumin. Roth explains:

One day in the fall of 1985, while Mel, who was veracious in all things large and small, was taking the roll in a sociology class, he noted that two of his students had as yet not attended a single class session or attempted to meet with him to explain their failure to appear, though it was by then the middle of the semester.

Having finished taking the roll, Mel queried the class about these two students whom he had never met. “Does anyone know these people? Do they exist or are they spooks?”—the very questions that Coleman Silk, the protagonist of The Human Stain, asks of his classics class at Athena college in Massachusetts.

I loved “veracious.” It is such a perfect confluence of the Talmudic desire for exactitude and truth telling that pervades Roth’s work and its semantic cousin, “voracious,” complete with its suggestions of unrestrained libidinal appetite, also a powerful theme. I loved it even more when I checked the book’s text against The New Yorker’s version of the letter and saw that he had initially used the word “meticulous.” Roth had revised it to “veracious”! Perhaps he is only semi-retired?

But the pleasure I took in his explication of Tumin’s career and its relevance to Coleman Silk sits awkwardly beside the more voyeuristic pleasure I took in the second half of the essay/letter, where Roth provides an exhaustive compendium of why the source of inspiration for Silk was not Broyard. “I never took a meal with Broyard, never went with him to a bar . . . or a restaurant, never saw him in the sixties when I was living in Manhattan and on occasion socialized at a party.” This goes on for several pages, which also include minor and then not so minor encounters with this guy he hardly knows.

I felt, reading these passages, like a defense lawyer whose client has performed admirably on the stand but has not stopped talking when he should have, which could be a description of many of Roth’s characters—self-incrimination being another theme. It’s great in a novel but feels odd when it is the author writing in his own voice. I am sure it is true that Roth socialized at Manhattan parties in the 1960s “on occasion,” but it strikes an odd note. The whole letter, in its over-insistence, could make a good Saturday Night Live sketch. Or a good Philip Roth novel.

Roth’s letter is published in its entirety here. In addition to The Human Stain, Roth’s letter to Wikipedia touches on their entries for three of his other books and also on his fictional alter ego Nathan Zuckerman. Veracious, indeed.

Most of the pieces in this book are multitasking in some way. Roth provides literary joy while also running an errand. There are many acceptance speeches for his many awards. There are correspondence and/or interviews with authors like Edna O’Brien, Isaac Bashevis Singer, Milan Kundera, and Mary McCarthy. It’s like a concert in which the headliner keeps bringing on special guests. It’s fantastic if, as I do, you like the headliner’s taste as well as his songs. But the book functions mostly as a form of liner notes to his career and is probably best appreciated by those already interested.

The major exception to this is the opening essay, “ ‘I Always Wanted You to Admire My Fasting’; or, Looking at Kafka.” It has two parts. The first half starts “I am looking, as I write of Kafka, at the photograph of him taken at forty (my age) in 1924,” and goes from there into a brilliant rumination on the author’s life and work.

Part two is an ambiguous fictional memoir by Philip Roth about his Hebrew-school teacher, Dr. Kafka, as seen in 1942 when the author was nine. It is a kind of warm-up for a method of fiction as revisionist history he would use in The Ghost Writer and again in The Plot Against America—a dualistic essay/story that offers profound insights into Kafka.

Roth once said in an interview that he had to write for a hundred pages before he found the start of his novels; this image of the long approach, the summoning of velocity until one can take flight, has always stayed with me. In this opening piece we see it unfold like a time-lapse movie—the fascinating literary criticism builds up speed and then, in part two, Roth’s formidable powers of invention achieve takeoff velocity. We are wheels up and into the realm of imagination. Much else here is like the flight logs from the control tower. Roth has piloted a lot of memorable flights.

Why Write serves as a kind of transition between Roth’s final novel and the forthcoming Blake Bailey biography. I hope Roth is around for that. And that he comes out of retirement for an encore after the bronze bust of his likeness is finalized, just to mess with all of our veracious desires.