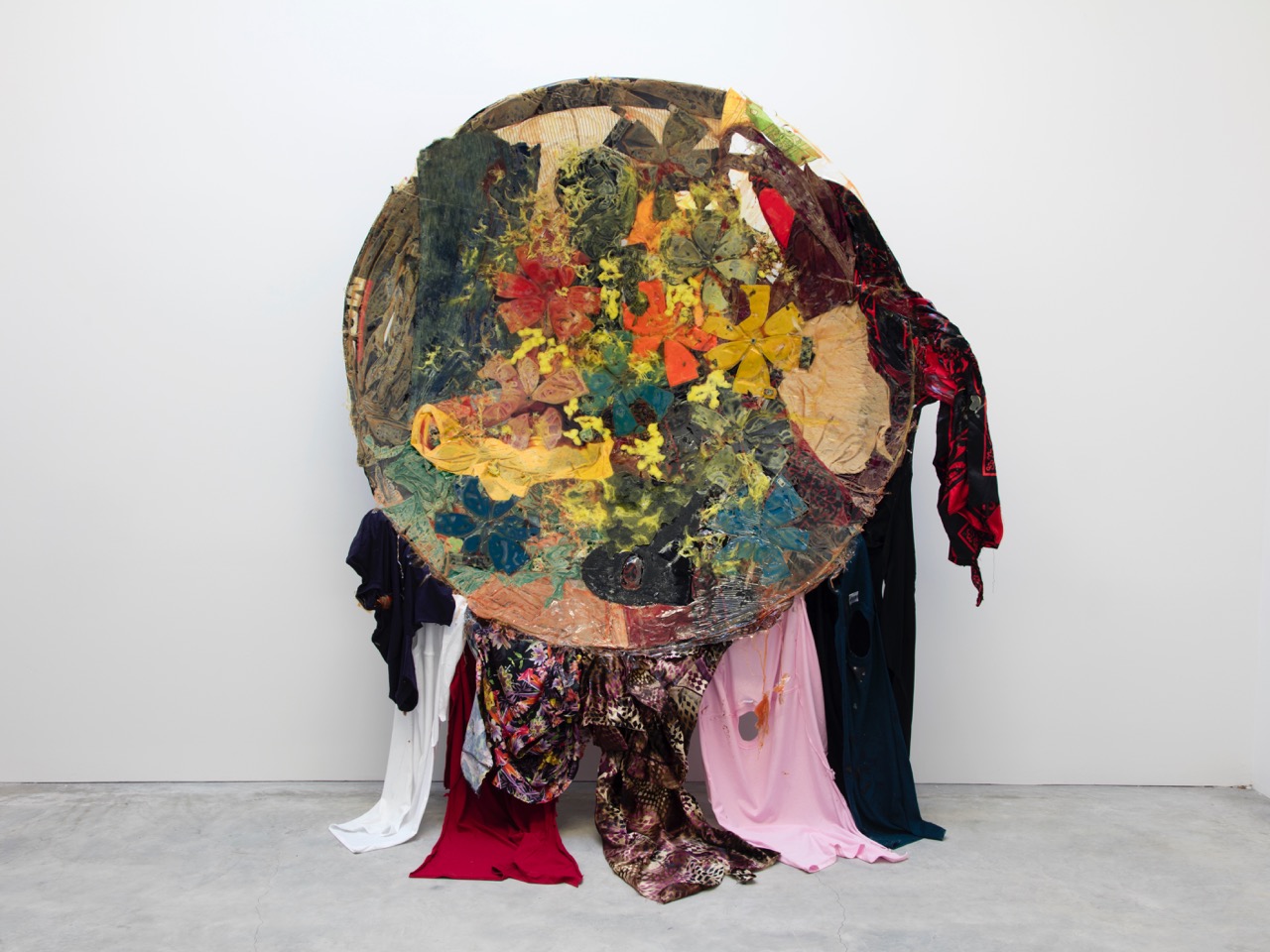 Kevin Beasley’s work, on view now at the Institute of Contemporary Art in Boston, could be described as painterly assemblage-esque sculpture or sculptural collage-ish painting or painterly sculptural combine-like installation, with a healthy dose of sound art thrown in for good measure. Its forms (rectangular slabs, concave disks, freestanding objects, wall reliefs, and more) refuse to fall into a single category or genre. This hybridity is fused with a surprising and even eccentric choice of materials: mostly clothing, newly purchased or well-used, often dipped in resin so it stiffens, defying its propensity to act like, well, fabric.

There are moments of brilliance in the young artist’s work. In some cases these are subtle, phenomenological experiences—as in Untitled (11) (2015), one of Beasley’s “acoustic mirrors.” The piece is composed of New Era caps (a staple of baseball teams and street style both); colorfully patterned house dresses like the ones Beasley’s grandmother used to wear, which he buys in bulk from the same shop in Harlem that she used to frequent; bandanas; pillow cases; down feathers; and other bits of debris. These are set into a container into which resin is poured. The resulting tondo, which sports protrusions of stiffened bandanas and waterfalls of droopy fabric that pool on the ground, is attached to the wall using a hinged television mount. The effect is a little like a postapocalyptic satellite dish, composed of the detritus of past lives, the leavings of absent bodies. But, as the wall label hints, move to just the right spot in front of Untitled (11) and murmur a few words, and perhaps you will do a double take, as I did, when you hear your voice bounced back to you—crystalline, slightly distanced, alien. The sonic shift is delicate but unmistakable, a quiet element in a work that is otherwise emphatically present. This is art that activates the space around it multiply: optically, thanks to the riot of colors and textures of its readymade materials; sculpturally, with the protrusion of the discus from the wall and its ability to be moved and directed thanks to the mounting device; and acoustically, in the way it concentrates and reflects sound. 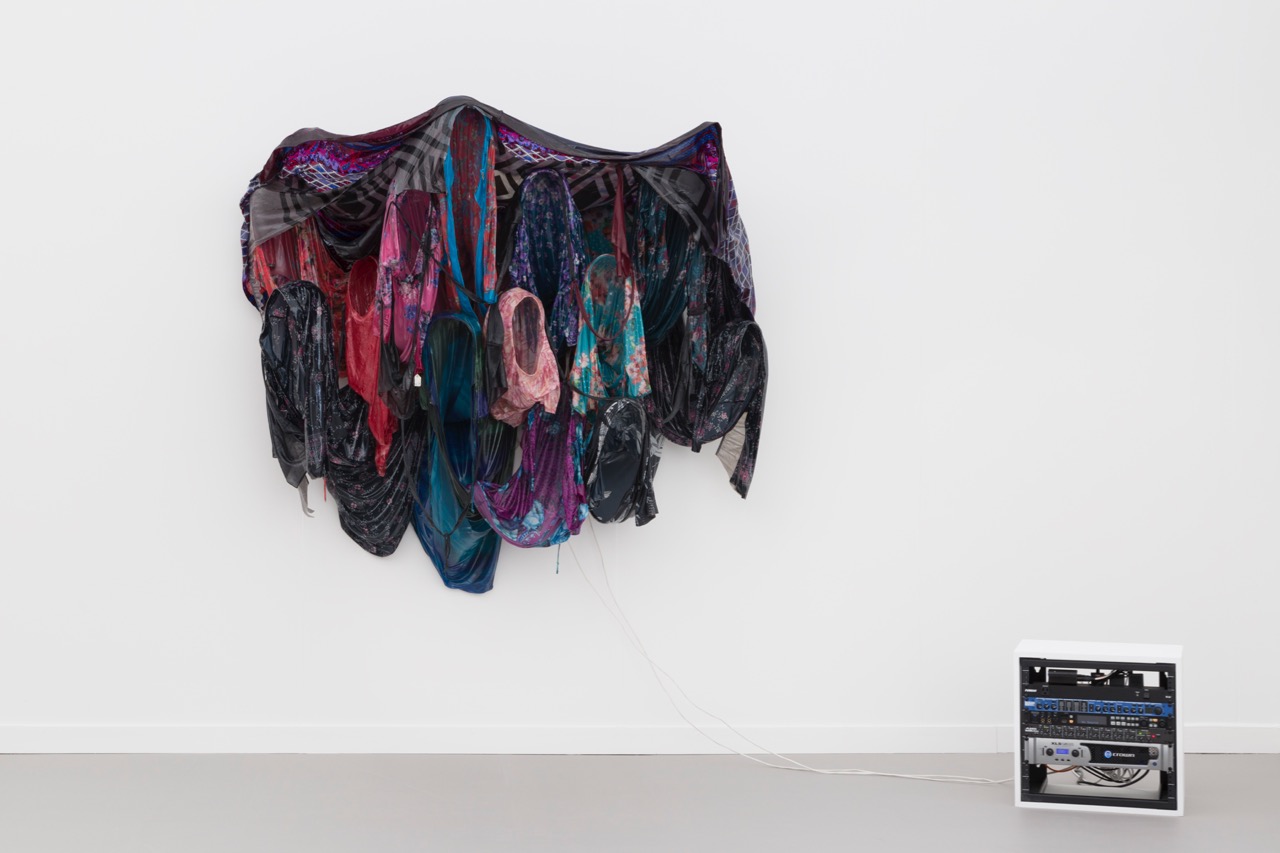 Phasing (Ebb) (2017) asserts its presence even more dramatically, which is to say it scared the bejesus out of me. Hung on the wall at the far end of the second of the show’s three galleries, the piece comprises housedresses, kaftans, t-shirts, and du-rags that were dipped in resin and draped over rounded foam molds that were subsequently removed. The result is a huddle of ghostly bodies, discernible only by the clothing that they occupy. The invisible figures wear this cast-off apparel badly, though, their “faces” framed by the armhole of a kaftan or the bottom of a housedress, as if they are hijabis or peasants.

Sound is once again integral to the piece. Hidden speakers, attached with wires to a case of audio equipment that sits on the floor in front of Phasing (Ebb), transmit ambient noises from another gallery, thanks to a microphone mounted high on the wall just outside the entry to Beasley’s show. Occasionally, and startlingly, the white noise of murmuring crowds and shuffling feet will be interrupted by the piercing sound of a clear, singular voice—someone calling a name, or singing a song—produced when a visitor who has noticed the wall label under the mic deliberately speaks up at it or an unwitting museumgoer happens to speak loudly in its presence. When I was looking at the piece, the laughter and chatter of two women, embarrassed to realize that a Senga Nengudi sculpture (that happens to be near the mic) was composed of pantyhose, broke through my calm contemplation. The effect was disconcerting and serendipitous at once—the women’s surprise that a sculptor would use such intimate garments ended up being transmitted from the mouths of Beasley’s ghostlike forms. 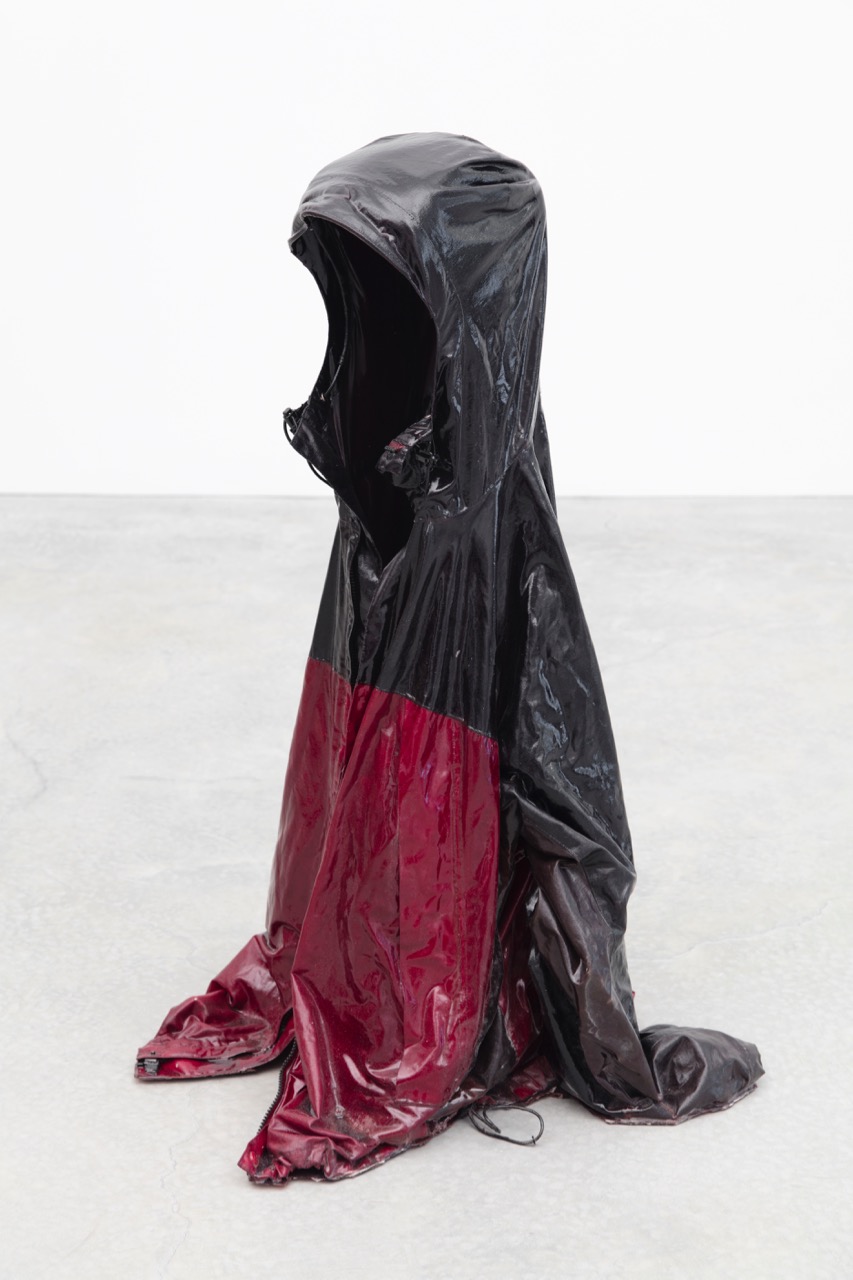 And indeed, many of the garments Beasley works with are intimate—things most often worn in private spaces, such as underwear—though they have come to define, and even stereotype, black culture in the US: the dresses working women throw on after coming home from a long, hot day in the city, the du-rags that people wear to keep their carefully braided or brushed hair from getting mussed when they sleep, and so on. In some cases, the clothing’s intimate nature is even more direct, as when the artist dips his favorite high school jacket in resin, allowing it to stiffen into another “ghost,” this time one the size of a small child (about three feet tall); the sleeves and hem of the jacket, too big for its current absent wearer, drag on the floor. An untitled work of 2014 uses as a support the shag rug from Beasley’s studio during his 2013–14 residency at the Studio Museum in Harlem; dangling from shoelaces in front are five dingy balls, composed of his rolled-up undershirts and jockey shorts, stained, perhaps, with the sweat of his efforts. 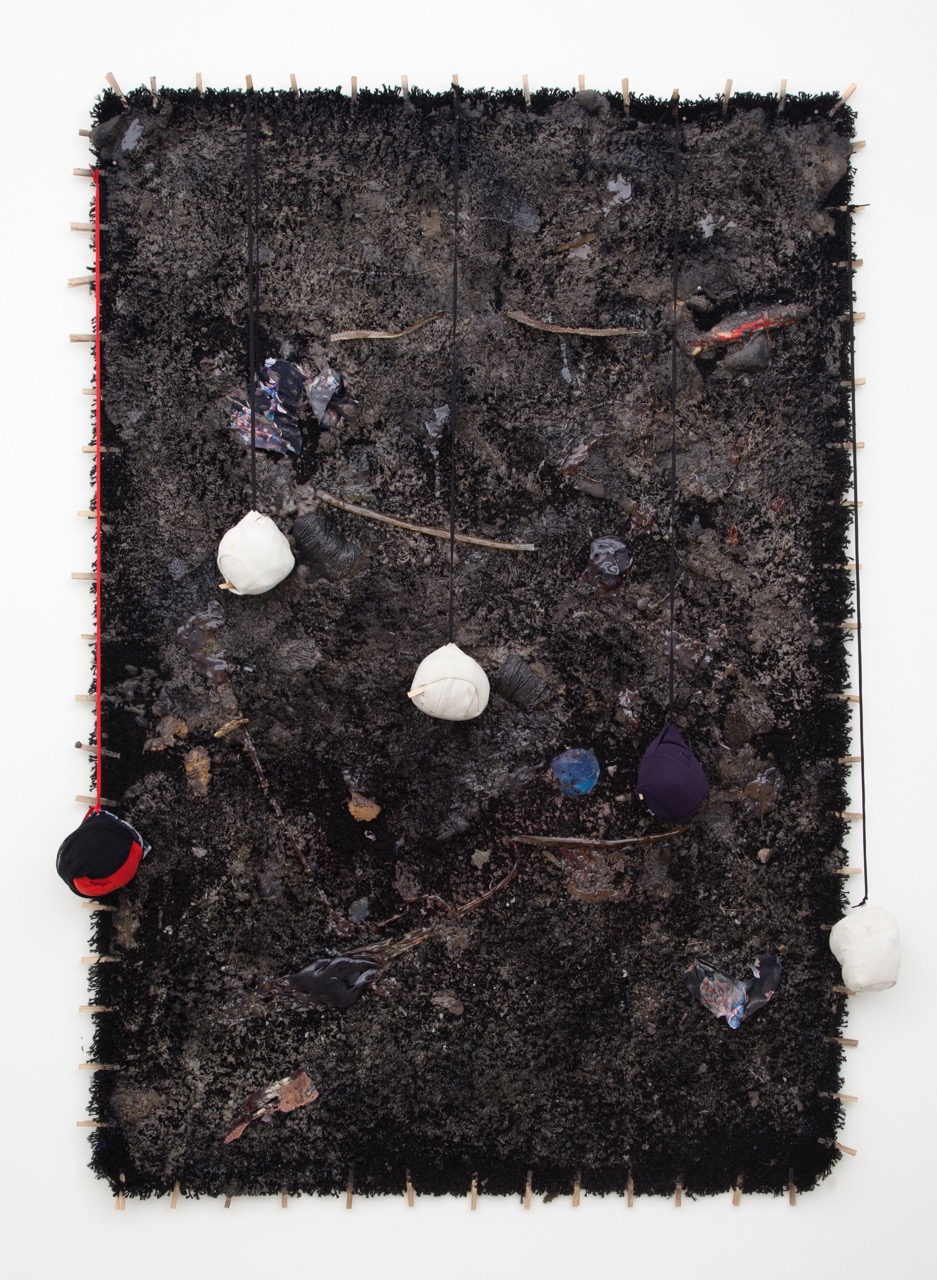 The four large slab works that fill the third and final room—all from 2017, all around 80 inches high and between 80 to 180 inches wide—were created, once again, by layering readymade clothing and other objects and casting them in resin. But with their near square or rectangular forms, they insist on being read either as sculptural reliefs—the wall label tells us that the artist took the ninth-century-BCE examples from Assyria that he encountered at the Pergamon Museum in Berlin as his inspiration—or as mural-sized paintings. Three of the four slab works are hung or lean on the wall, so you can see the edges and, most importantly, peer around to get a glimpse of the backsides of the panels, which range from three to five inches thick: the relative flatness of the front of each work (because you are seeing the surface that sat against the smooth bottom of the mold) stands in stark contrast to the jumbled, uneven accumulation visible on the backs (because you are seeing the lumps and bumps and tangles of stuff that weren’t fully submerged in the resin). 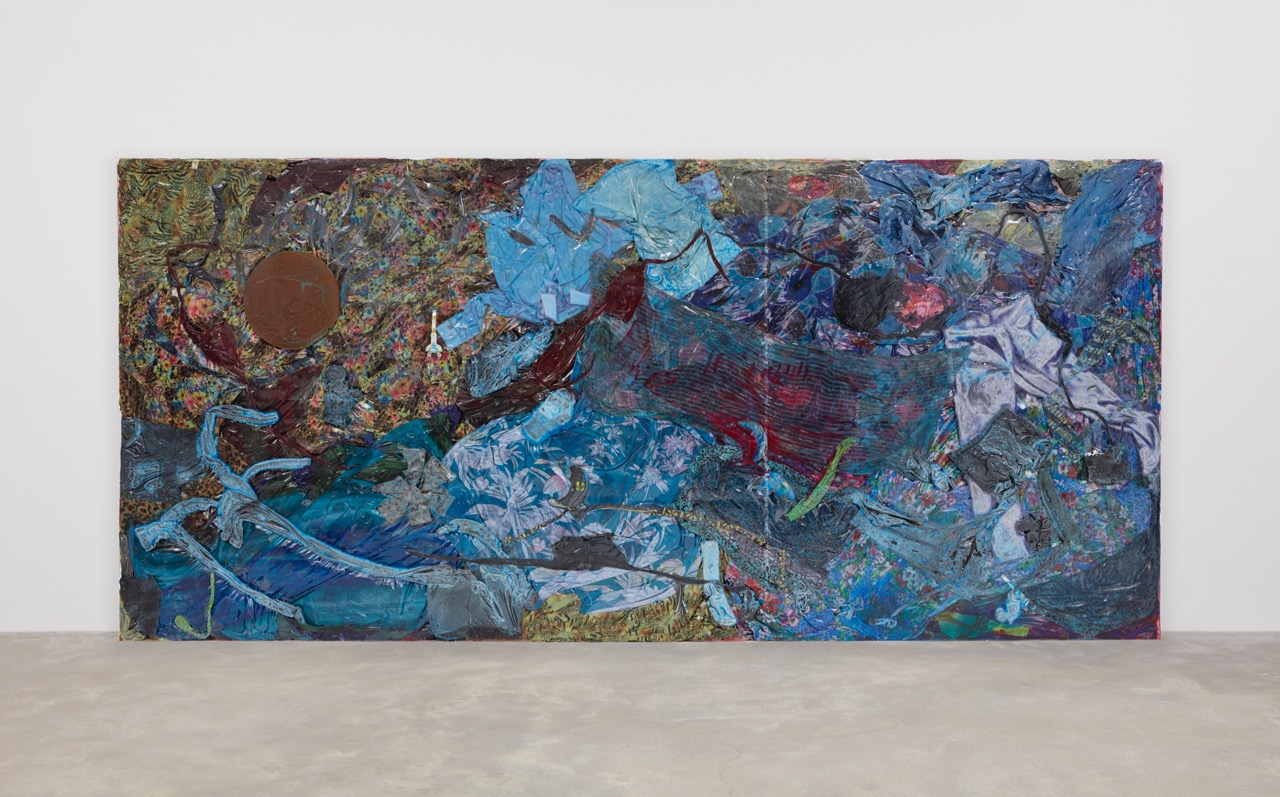 While the installation of these three slabs foregrounds their status as sculptural objects, the fourth—A View of a Reflection—is set into the white wall, so its depth is not visible. As a result, we are able to recognize these works as radical interventions in the space of painting. From a distance, the garments, feathers, mouth guards, and other materials embedded in the surface of A View of a Reflection create an improvisational, virtuosic play of color and texture, equal to any AbEx masterpiece: various shades of blue, from cobalt to ultramarine to whatever blues generic button-downs come in these days, are joined by bursts of carmine, coppery browns, dun greens. Close up, the surface is filled with visual incident: a fretwork plane punctuated by gaps and air holes where the resin did not seep, offering the delightful opportunity of identifying the unexpected objects that found their way into the frame. This and the other slabs open up the space for a painterly abstraction fully tied to a paradoxically visceral disembodiment, to cultural detritus, and ultimately, to blackness—one that is poetic, funny, elegiac, eerie, and, most of all, profoundly beautiful.