In his oblique manner, the sculptor relays the state of the nation. 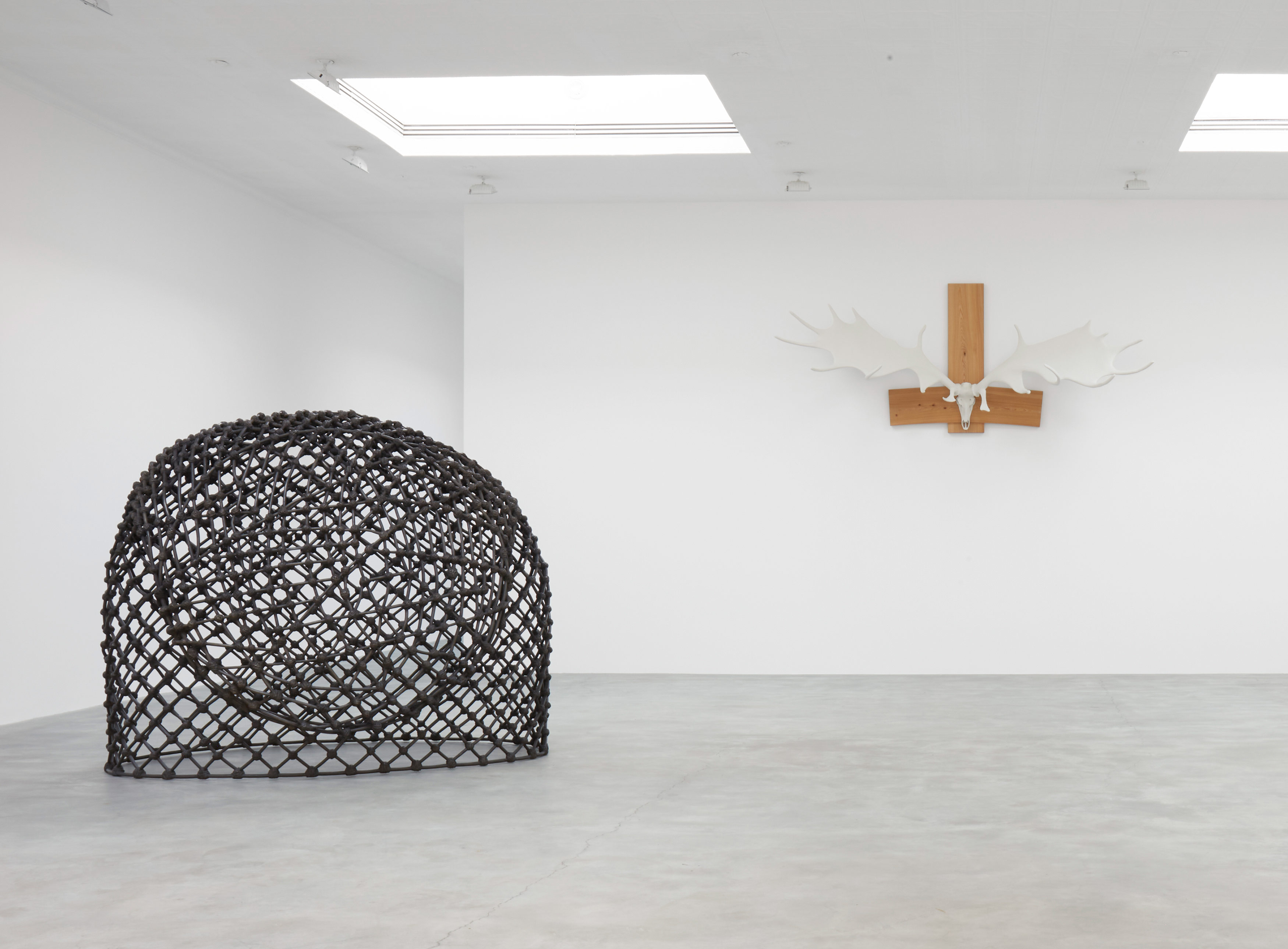 Despite being made of the most obdurate materials, crafted into simplified, even elemental, shapes, and possessed of a quiet stillness, Martin Puryear’s sculptures never quite settle down—they are constantly shifting in meaning, as we connect their forms to myriad ideas, objects, and histories. Take Tabernacle (2019), the most formally complicated of the six works on view at Matthew Marks Gallery (and in an excellent online exhibition). The exterior is composed of an open grid of steel bars shaped like a fat, bent cone with the top lopped off, set on a curved flange. Fabric lines the grid—black canvas facing the outside, old-fashioned but elegant botanical print inside; multiple cutouts allow us to view the interior space, which houses a squat wooden mortar cannon with a truncated barrel, inside of which a mirrored cannonball-like sphere sits, ready to be fired. 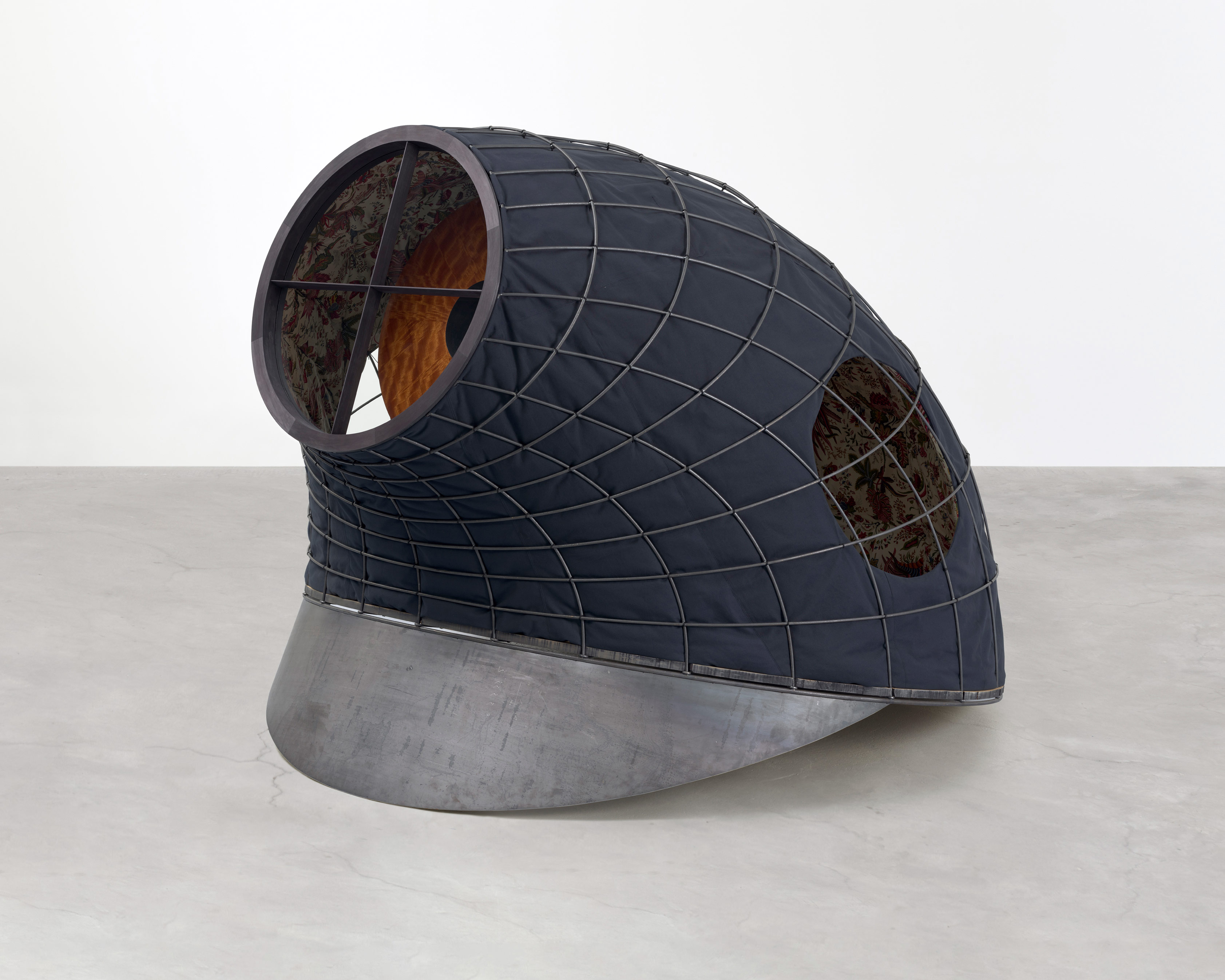 The overall shape of the piece refers to hats worn by Civil War soldiers, and the cannon to the weapons that were used in that conflict, but of course nothing is so straightforward in Puryear’s work. The circular opening at the top of the squashed cone is fitted with two steel bars that echo crosshairs; when you look through them, you are staring down the barrel of a gun or through a telescopic sight—you are either the hunter or the prey, in other words. The blunt, business end of the cannon is fabricated out of luxurious makore veneer, its distinctive grain transforming it into the image of an iris; the cannonball peers back at you like a giant pupil in which you can see yourself reflected. The title, Tabernacle, is similarly polyvalent: it connotes a house of worship, a temporary dwelling (like a tent), or a receptacle for a holy object. The veneration of guns, the Civil War, civil wars to come—Puryear doesn’t propose a linear statement in this work, but his web of allusions to what ails this country couldn’t be clearer.

Most of the works on view were part of the artist’s installation at the US Pavilion for the 2019 Venice Biennale, where Puryear’s oblique but unmistakable critique of the state of the nation offered insight for a global audience into the violence and cruelty that helped make the Trump administration possible. The observations are just as apposite for American viewers still processing the bumpy and violent end of that regime. 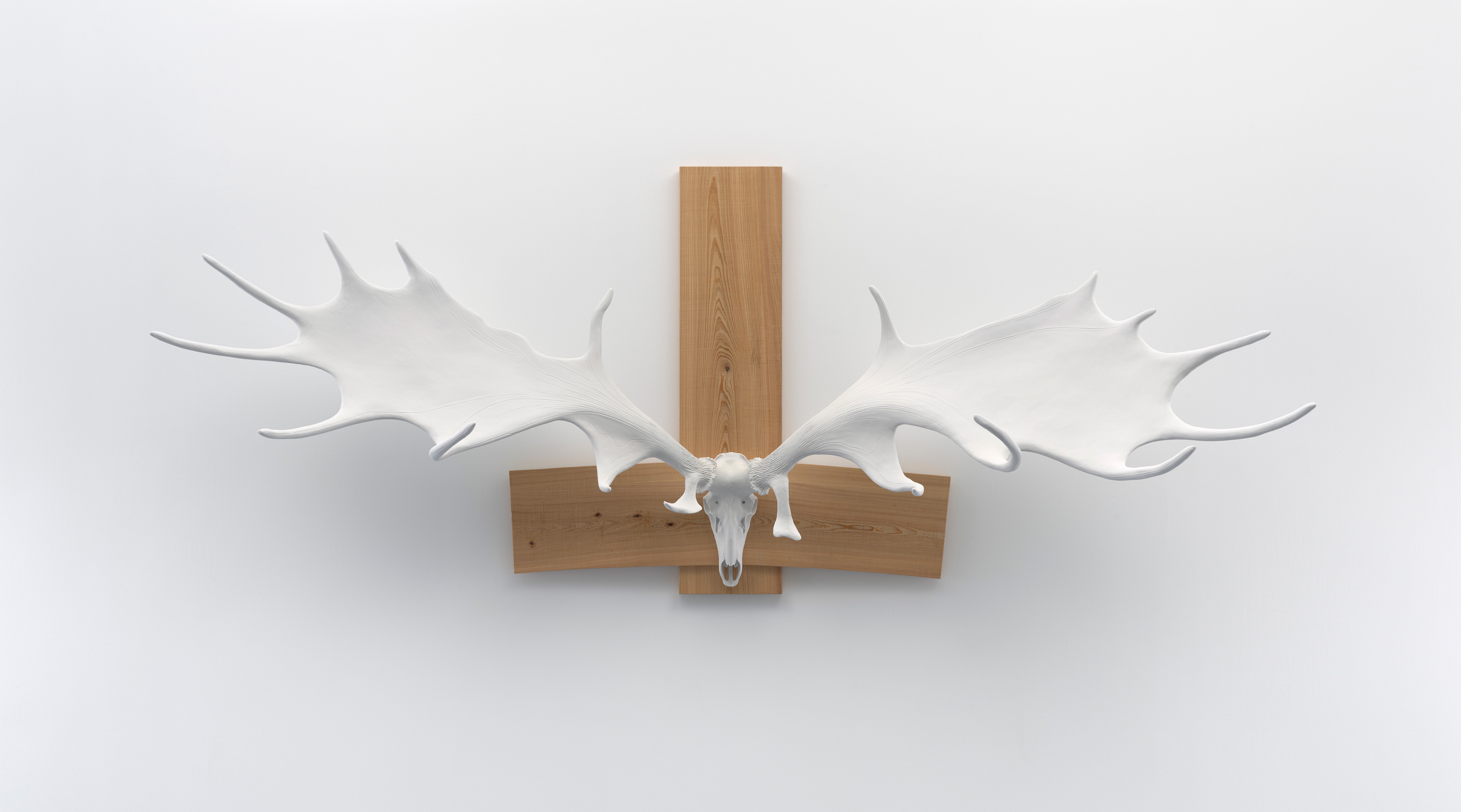 Hibernian Testosterone (2018) is a meditation on toxic masculinity: on an inverted cross hewn from American cypress, we find an absurdly large set of white-painted antlers. Cast in aluminum, this is a full-scale reproduction of the skull of an Irish elk, an Ice Age animal that went extinct in part because of the havoc testosterone played, prompting the growth of larger and larger horns to survive combat with other males of its species and to attract mates; carrying such weight taxed its energy so much that the species could not sustain itself. But of course, the way this almost twelve-foot-wide fossil is mounted alludes to another form of toxic masculinity, namely trophy hunting—one of the reasons for today’s crisis of mass extinctions. 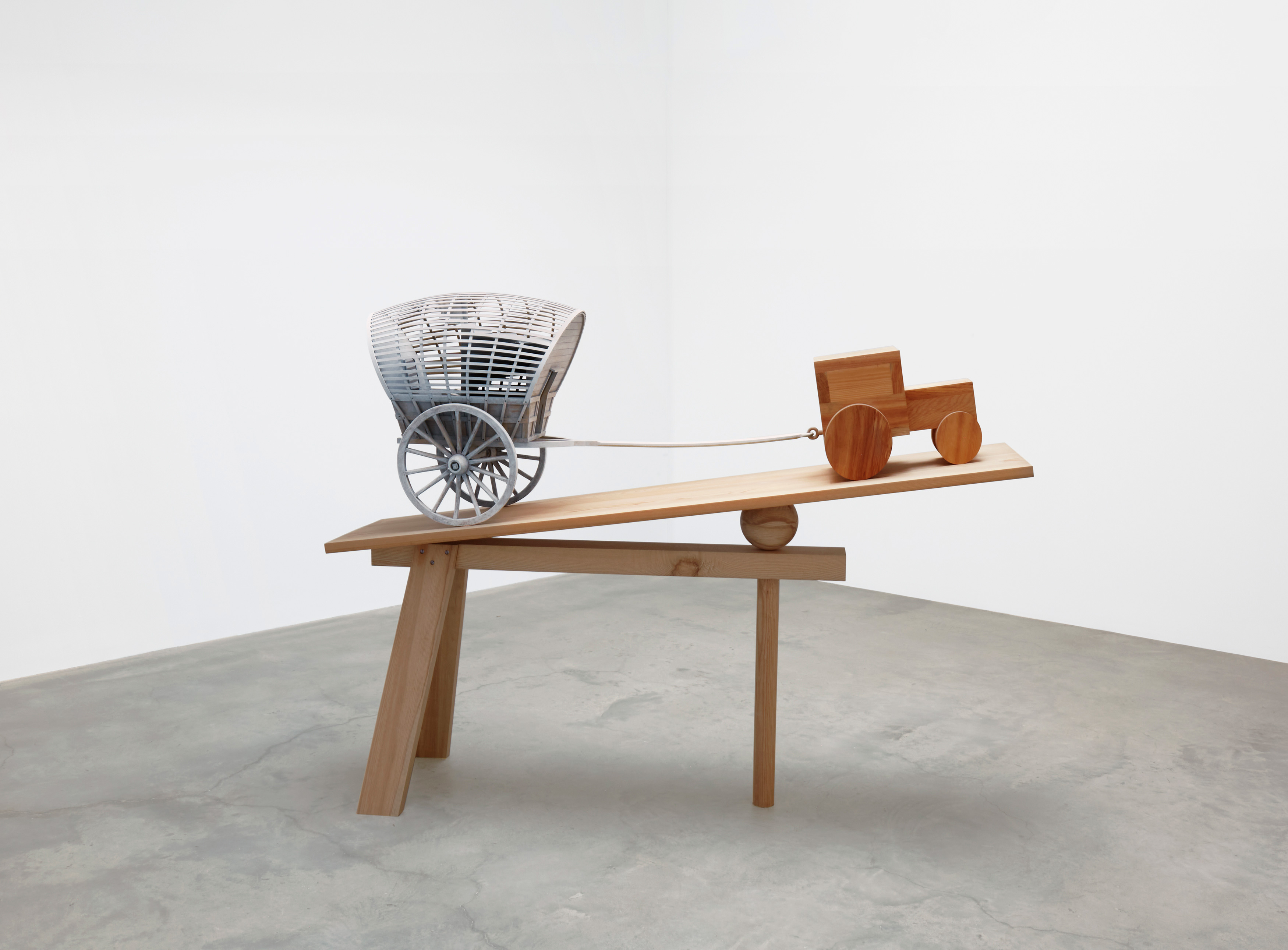 Likewise, though the title of New Voortrekker (2018) nods specifically to Dutch settlers in South Africa, it can and should be read in relation to the US’s own history of colonial violence: the voortrekkers, like the American pioneers, were celebrated for their adventure and grit, in a way that erased or overlooked the harm they perpetrated on Indigenous populations in the process. The piece consists of a small covered wagon created out of silvery American cypress and maple; through its latticework top you can see a spiral staircase, a form that Puryear has used in the past to indicate the ambivalent trajectory of “progress”—this is a staircase to nowhere, one that twists back on itself in its ascent. Lest we lull ourselves into the idea that such histories are firmly in the past, this wagon is ostensibly pulled up the canted base on which it sits—a three-legged sawhorse with a tilted surface—by a simple wooden truck, precisely crafted in pine. The simplicity of these components—the elements seem like children’s toys as much as anything else—demands a very mature reckoning with the way the real violence of nation-building endures in our white supremacist present in the lives of Black South Africans and the Indigenous people in the present-day US alike, and also with the amount of energy that we expend today to prop up those mythologies of a heroic past. 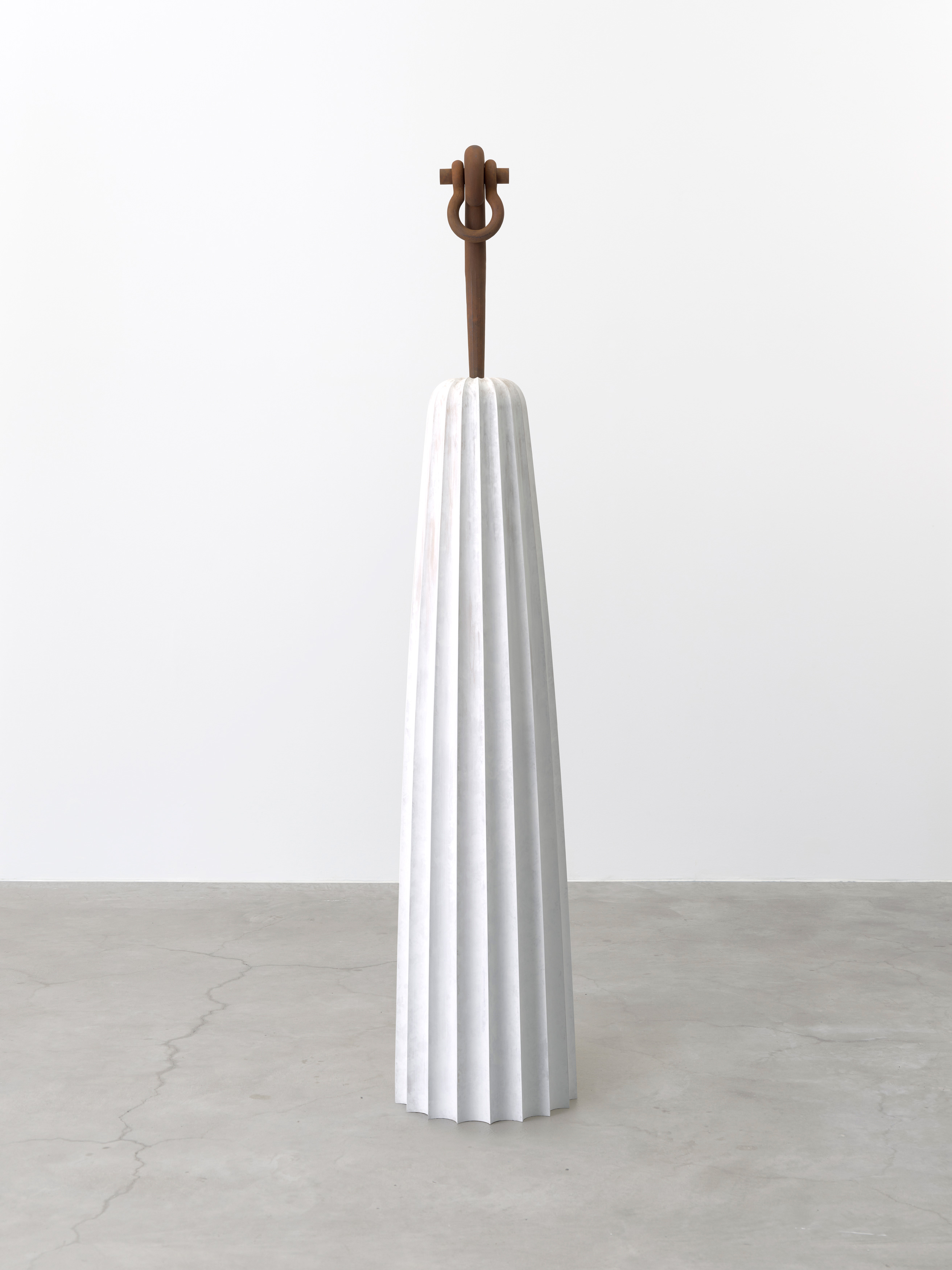 The most striking piece in the US Pavilion in Venice was A Column for Sally Hemings (2019). (It was included for the majority of this show’s run, but after December 19 was replaced with another piece, Askew Aloft Aloud, a pine sculpture from 2020 that hovers somewhere between chair and ladder and figure, whose form breaks and shifts as you walk around it thanks to its irregularly bent legs.) A Column for Sally Hemings derives its power from Puryear’s profound meditation not just on his professed subject—the young woman enslaved by Thomas Jefferson by whom he fathered several children, and whom he claimed to love despite refusing to free her or their offspring—but also on the physical forms he employs. The base of the sculpture, carved from tulip poplar and painted white, recalls classical Doric columns, which themselves were abstractions of the pleated skirts of Greek goddesses and caryatids—the women imagined to hold up the edifice, in other words. Rising from the pinnacle of this feminized column is a cast-iron spike, topped with a bolted ring. The effect is elegant and horrifying at once; from some angles this column/effigy looks like a graceful bird, while from others it resembles a shackled human. It is a piece that grants Hemings her dignity while refusing to overlook or romanticize the realities of her condition. There was an element of site-specificity for its showing at the Biennale, since the US Pavilion was designed to echo the Neoclassicism of Jefferson’s Monticello; the object loses little of its power, though, in the clean, minimalist white box of Matthew Marks Gallery. 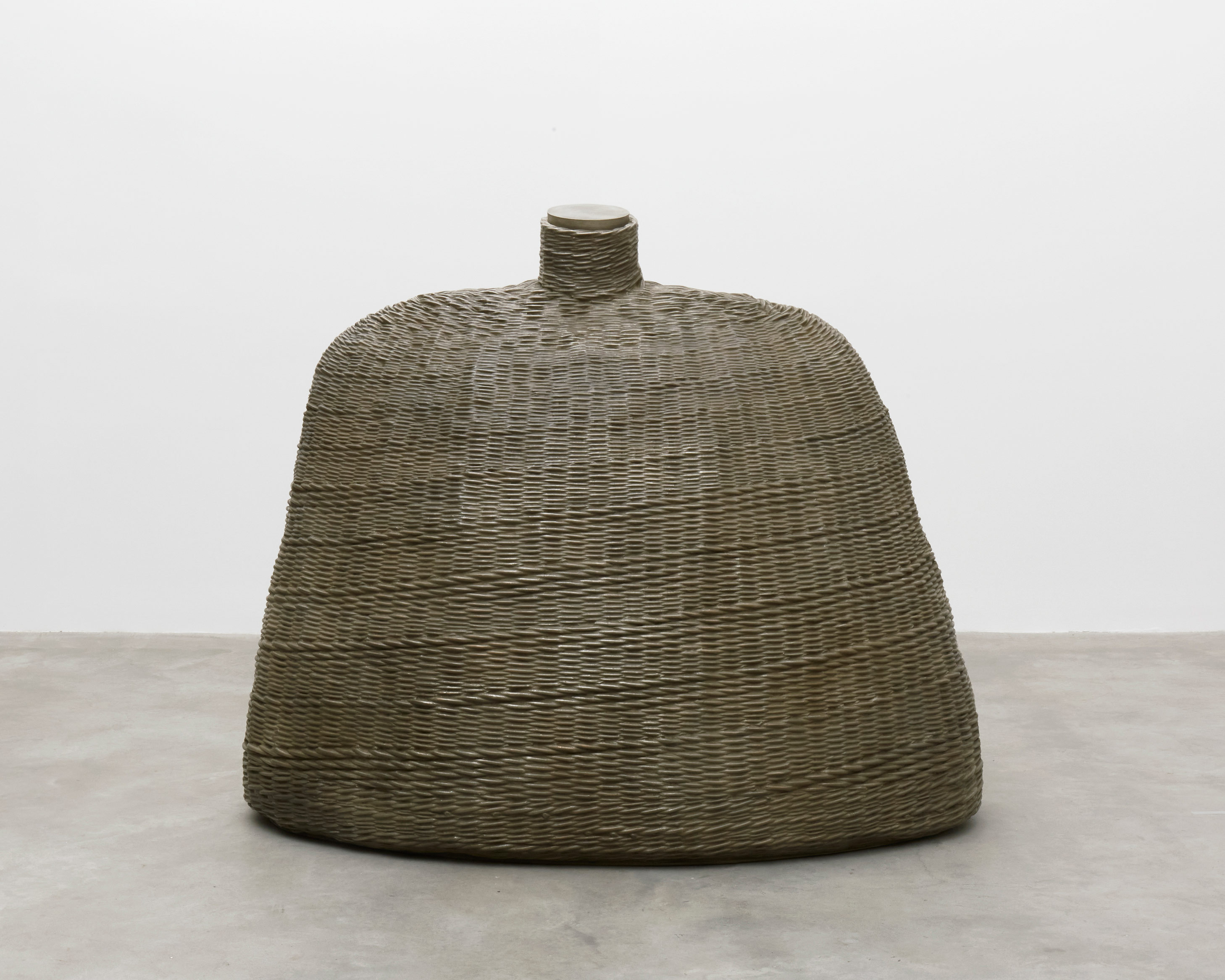 The single piece in the show that was not part of Puryear’s Venice exhibition is one of the most striking: Happy Jack (2020) is a five-foot-tall, tapered volume with a neck capped off with a cork; it was developed over decades, first as a wood maquette in 1993, then, with the help of a master basket weaver, in willow, and finally, after casting, as a bronze sculpture. While its shape rhymes with the hat-like objects in the room—Tabernacle, but also the open weave of Aso Oke (2019), based on a typical Yoruba cap—the effect is decidedly that of a headless torso whose back is curiously flattened, like a flask might be. It is body and vessel at once, but also something like an enclosure; it is hard not to be intensely aware that this piece has an interior emptiness to it, despite not being able to see into it. There is a subtle pathos here, an almost subconscious reminder that animal skins have been used for millennia as bottles and wineskins, and the consequent question about the ways human bodies have been exploited, hollowed out to serve the appetites of others. The paradox of Puryear’s work is that none of these realizations cancel out the true beauty of his forms. They merely force us to contend with how beauty itself can mask dark histories.