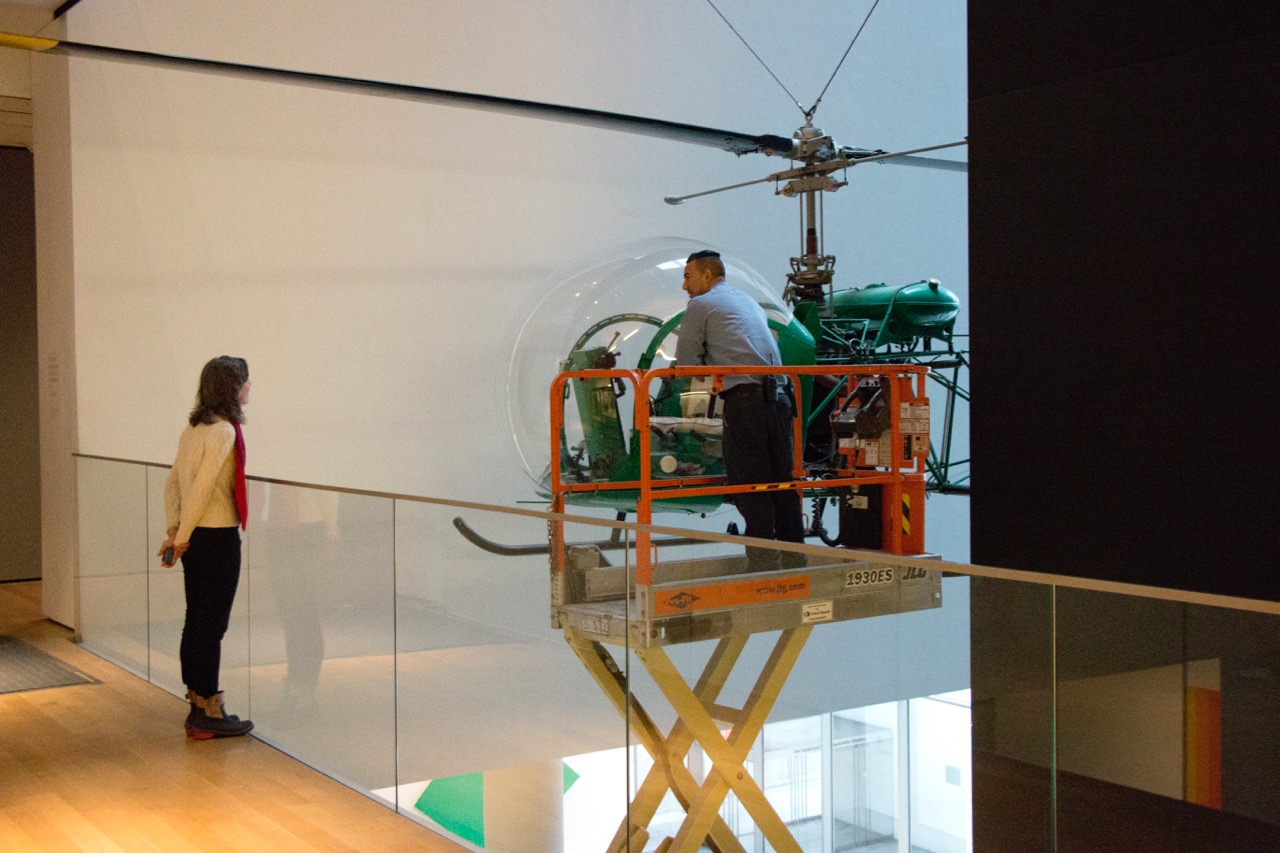 What has always struck me about the New York-based conceptual artist Nina Katchadourian is her capacity for wonder. Whether she’s combating the tedium of long-haul travel by photographing herself in the style of seventeenth-century Flemish portraiture in airplane bathrooms using the paper products she finds on hand to fashion her ruffs and bonnets, or exploring the world of eye floaters, or creating concrete poetry from the spines of stacked books, her work walks a line between the hilarious and the uncanny, boredom and fascination, the utterly ordinary and the almost magical. (It’s no surprise that an upcoming survey of her work opening in March at the Blanton Museum of Art in Austin, Texas, will be titled Curiouser, an allusion to Alice’s reaction to life down the rabbit hole.)

In Dust Gathering, an audio tour that Katchadourian created over the course of two years’ research for the Department of Education at the Museum of Modern Art in New York, the artist turns her attention to dust, the most mundane of the mundane. For roughly thirty minutes, she guides the visitor through the building to see how and where dust collects and is removed. At each stop on the tour—the main lobby, a closet holding air purifiers, the soaring atrium, the helicopter that hangs on the second floor, a window ledge, a vitrine that holds Meret Oppenheim’s furry teacup, some Brancusi sculptures, a Picasso painting—we hear Katchadourian interview staff about the particular challenges they face keeping the building and its contents clean. We are invited to peer through windows, run our fingers along walls, and consider artworks not as objects of beauty but as dust magnets. The effect is endearing and slightly horrifying. MoMA is transformed from a high temple of modern art to something more intimate and familiar: like most of the spaces in which we live and work, it’s kind of filthy, if you look closely enough. 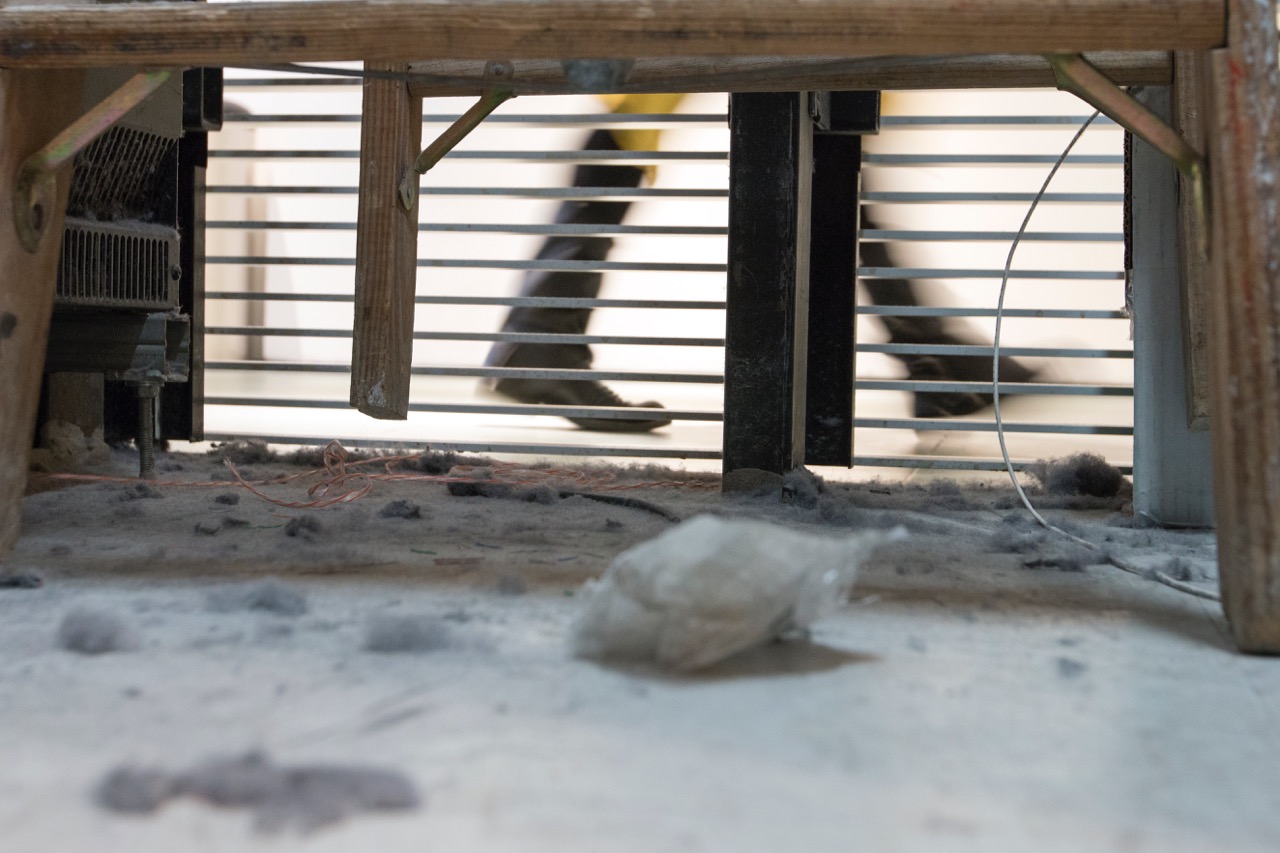 The audio guide (accessed through the MoMA app, on the museum’s website using a smartphone, or on an audio device you can pick up at a visitor services desk) serves a double purpose. Most obviously, it is the means by which we come to share Katchadourian’s fascination with the bits of skin, pollen, pollution, dirt, and other contaminants tracked into the building by each of its three million annual visitors. But at the same time, it is a lens through which we can focus on the labor that goes into running a museum—labor that is often as overlooked as dust itself. During the tour, we hear from building operations staff who are responsible for keeping the galleries at seventy degrees and fifty-percent humidity at all times for the sake of the art, while making sure the air systems don’t get clogged; the conservators who are responsible for cleaning delicate or hard-to-access objects, using everything from aeronautical wipes to their own saliva; the guards who field visitors’ complaints about unkempt nooks and ledges; and a curator who talks about artists’ fascination with dust in the twentieth century, among others. (The single voice from outside the institution is an allergist who explains the evolution of dust mites—the bane of the allergy prone, but the last line of defense keeping humanity from drowning in its own detritus, since they eat what we shed.) 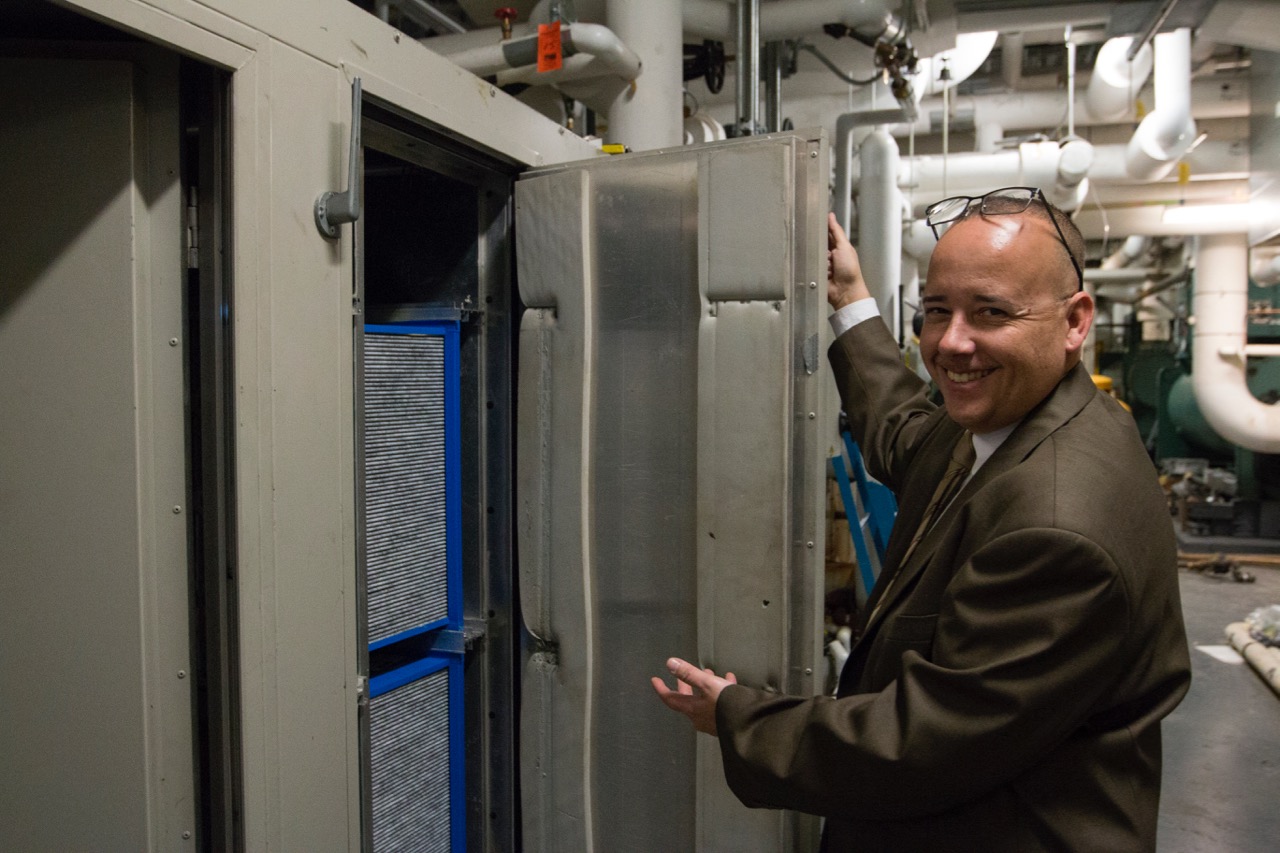 There is, if I’m not mistaken, a subtle subversion relayed in the fact that the breakout star of this tour is not a high-profile curator or a museum muckety-muck, but the assistant director of building operations—Nelson Nieves—who, with his good-natured charisma and Nuyorican accent, gamely plays along with Katchadourian’s quixotic search for the significance of soot. “Wow, unbelievable!” he exclaims, with just a touch of ham, when opening an electrical closet on the ground floor that is a particular magnet for lint and grime. “Just as I was expecting, piles and piles and piles of dust. Well, it must have been a good day yesterday! . . . Maybe about enough for a wig.” (Tour participants cannot see inside the closet, but are instructed by Katchadourian’s narration to drag their fingers along its slatted door to experience the buildup of grime. It is suitably and delightfully gross.)

As it happens, Katchadourian’s project at MoMA coincides with a show at the Queens Museum (on view until February 19) of the work of the feminist artist Mierle Laderman Ukeles, who Katchadourian has often cited as a touchstone for Dust Gathering. Ukeles has spent her career shining a light on oft-unacknowledged “maintenance work”—childcare, the cleaning of office buildings and art collections, and, most famously, municipal garbage collecting. In a 1973 performance at the Wadsworth Atheneum, Transfer: The Maintenance of the Art Object: Mummy Maintenance: With the Maintenance Man, the Maintenance Artist, and the Museum Conservator, Ukeles pointed up the arbitrary value placed on different expenditures of effort within the institution. When a janitor wiped down the mummy case as part of his daily routine, it was an unremarkable act of cleaning. However, when Ukeles did the same thing, her gesture was understood as a form of art that could only be maintained by a conservator, who was obligated (over the course of the performance) to come into the gallery daily to repeat the gesture and write up a conservation report recording the action in order to preserve it as art.

Katchadourian’s Dust Gathering inflects this astute observation by revealing the ways in which each of the workers she interviews treats their employment, no matter how routine, as a quasi-artistic practice. The guard recounts how he asks patrons who complain about an unclean ledge to think of the cosmic implications of what they’re looking at, giving them a mini-tutorial in philosophy in the process. The art handler (who points out that many people who hold that job are themselves artists) speaks with an almost ecstatic reverence about the objects he handles each day. The visitor-services assistant tells Katchadourian about the stories he concocts based on imagined conversations between the motes tracked in by museumgoers from around the world. The conservator shows off the life-sized rabbit she has sculpted from the fluff gathered during the daily cleaning of the galleries—a literal dust bunny. The effect is one of enchantment and disenchantment at once: the labor that produces the spectacle of the museum is laid bare at the same time that the dust itself inspires wonder, and even a kind of magic under Katchadourian’s nimble aegis. 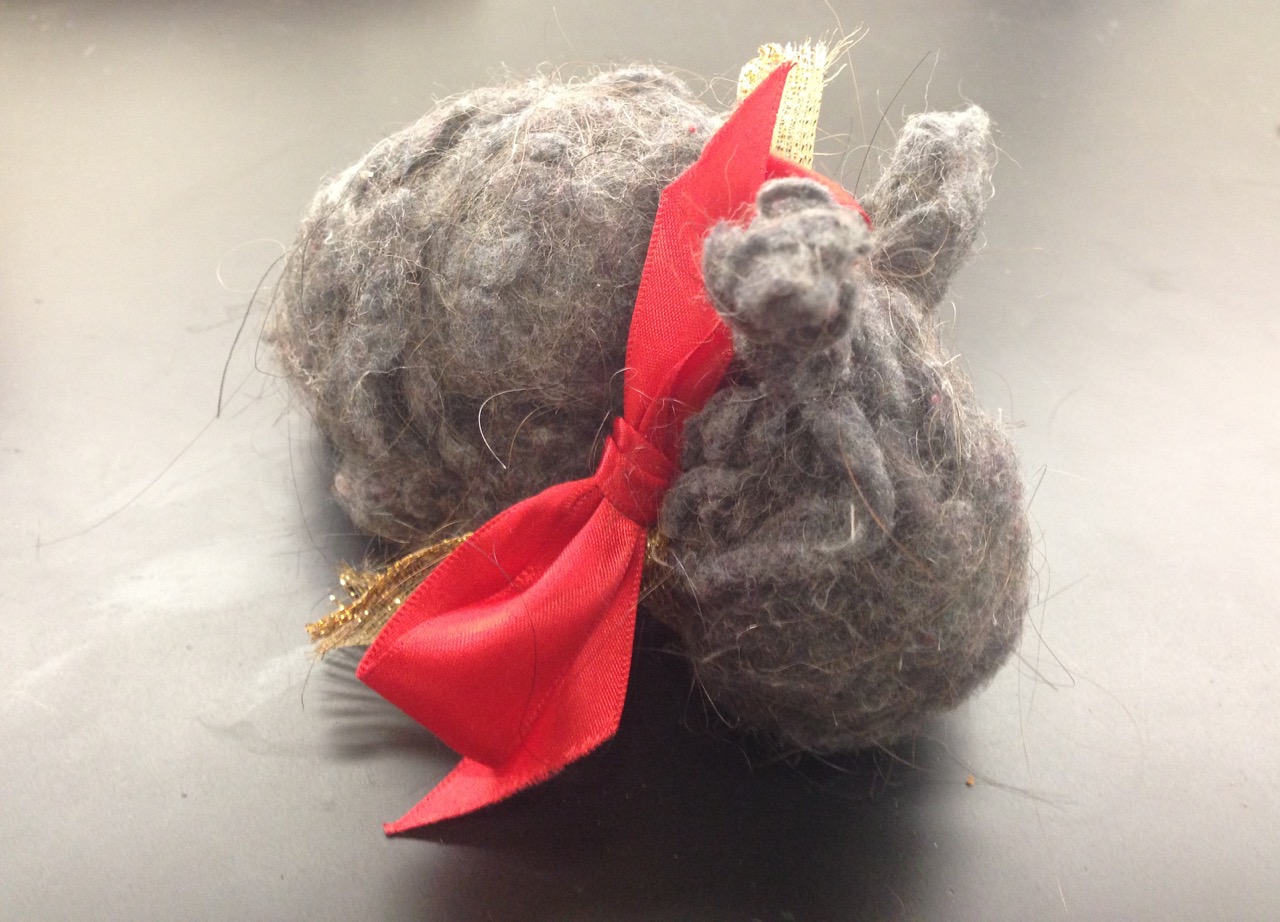 Aruna D’Souza is a writer based in Western Massachusetts. Her writings on art, feminism, culture, diaspora, and food have appeared in Bookforum, Art in America, Time Out New York, and The Wall Street Journal, as well as in museum publications from the Museum of Modern Art, the Los Angeles County Museum of Art, and the Musée des Beaux-Arts, Monaco, among other places. She is currently working on a volume of Linda Nochlin’s collected essays to be published by Thames & Hudson.