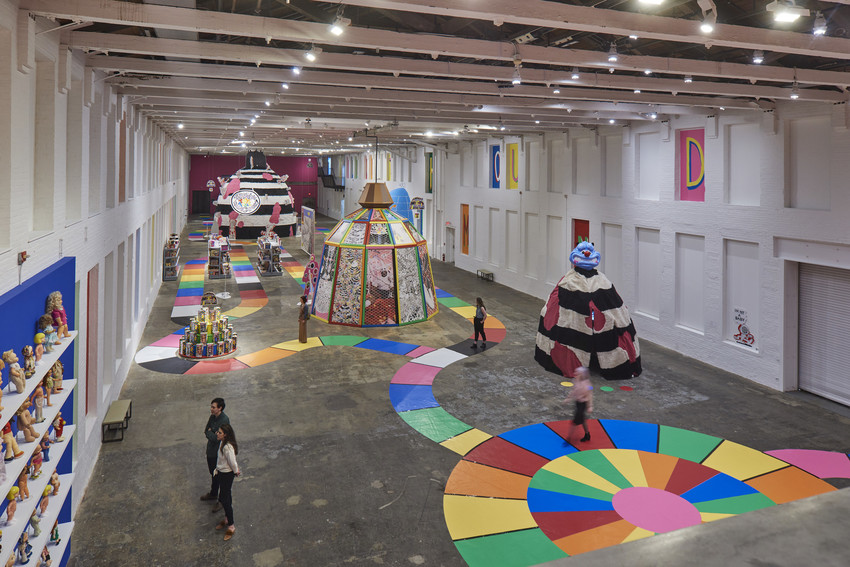 Building 5 at MASS MoCA—a gallery that is 16,500 square feet and double height, with a string of clerestory windows, brick walls, and raftered ceilings signaling the building’s former life as a factory—is a blessing and a curse. Over the twenty years of the museum’s existence, it has offered a number of artists, including Nick Cave, Xu Bing, Ann Hamilton, and others, the opportunity to take up space. Space, however, is one of those things that sounds great in theory but can be hard to deal with in practice; the various projects commissioned for Building 5 have been rather hit or miss, some seeming swallowed up and insubstantial, others veering toward the bloated or merely spectacular. 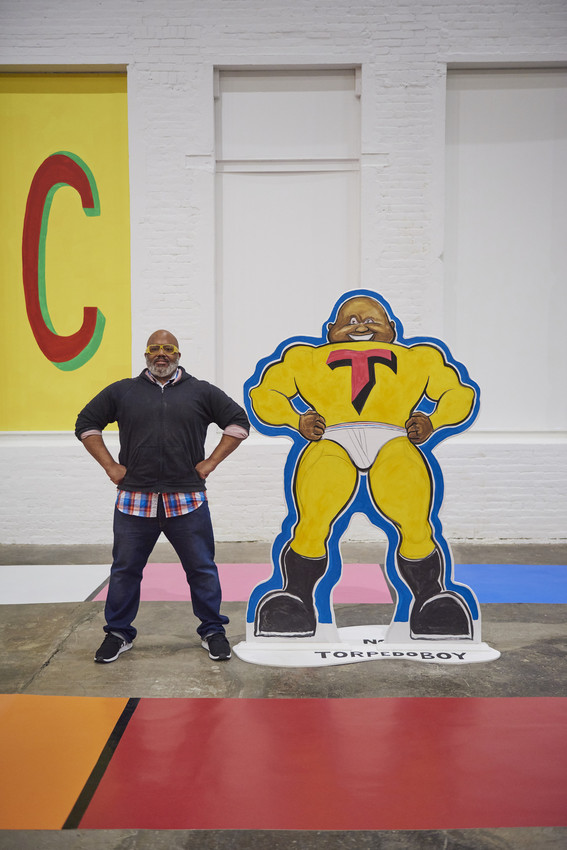 Trenton Doyle Hancock’s current installation, Mind of the Mound: Critical Mass, is one of the best shows I’ve seen in the challenging gallery. It succeeds because Hancock’s vision is sufficiently epic to require the square footage. The project is a materialization of a fantasy world the artist has been fleshing out since the age of ten, when he created his alter ego Torpedo Boy, who wears his tighty-whities over his spandex superhero getup. Over the years, Hancock has drawn upon a vast array of sources—comic books (R. Crumb definitely, and perhaps Ralph Bakshi), Greek mythology, Carl Jung, the history of art (George Grosz, Henry Darger, Philip Guston, and Claes Oldenburg), pop culture (Pee-wee’s Playhouse, the Marvel franchise, video games, and Hollywood movies), Afrofuturism, his own autobiography—to conjure a world populated by what he calls “Mounds.” These creatures, networked by an underground root system, are part plant, part human, and function, in the artist’s words, as “natural depositories for memories and other bits of discarded humanity.” In a nod toward the battle between good and evil that marks almost every superhero story and children’s adventure tale, these creatures are under threat from the evil Mound-eating Vegans and rather ineptly protected by Torpedo Boy. 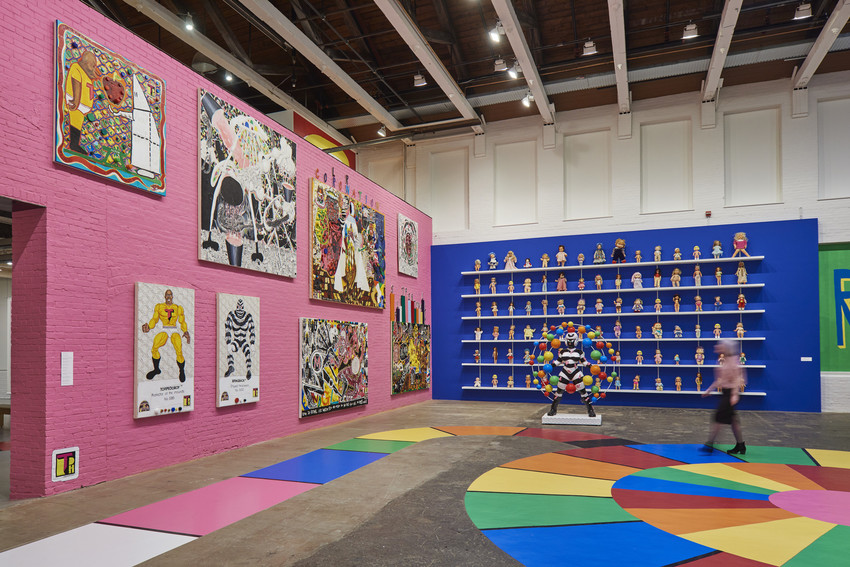 Until now, Hancock has mostly elaborated these characters in the form of paintings and mixed-media sculpture, with the occasional public mural and even a ballet thrown in. At MASS MoCA, the artist has been given the opportunity to realize his vision on a large scale. He fills the gargantuan room with three massive three-dimensional Mounds, linking them via a multicolored path reminiscent of a game board. Flat painted plywood figures—life-sized versions of those cardboard cutout board game pieces, the ones you had to insert into little plastic or cardboard stands—are scattered throughout the space, representing both heroes and villains. There are paintings, a human-scale plastic action figure, digital animations, and curiosities of all kinds. There is enough happening visually and spatially that the effect is immersive—this is a choose-your-own-adventure type of deal. 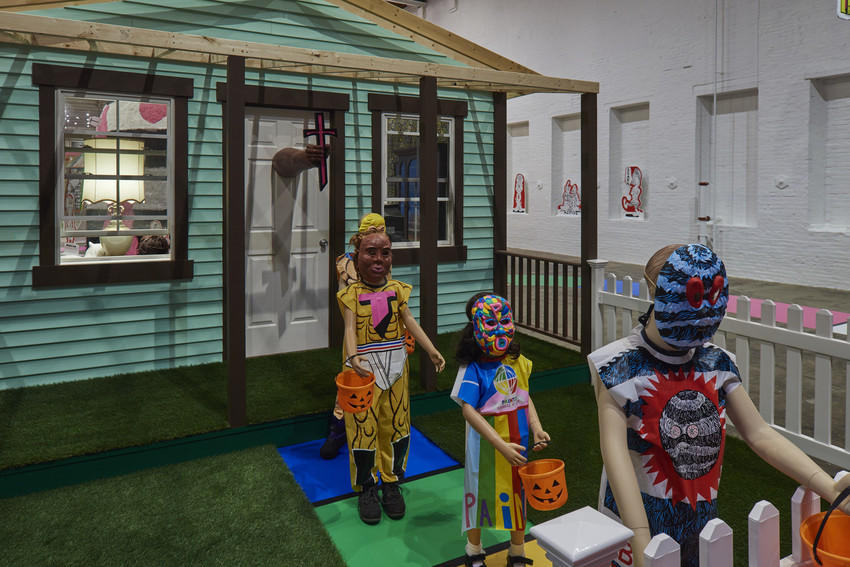 The first structure you encounter is not a Mound per se, but a recreation of Hancock’s grandmother’s house. (This is a classic hero backstory setup; we’re being introduced to the forces that shaped the artist. Best to pay attention.) On the front walk of the white-picket fenced yard are three child-sized figures dressed in Halloween costumes, looking eerily blank-eyed; projecting from the front door, a disembodied arm wielding a protective cross warns them away. Stroll around the back of this movie-set-like structure and you’ll see the living room, filled with an old lady’s collection of cutesy, white bisque Precious Moments figurines sporting labels like “The devil made me do it,” old copies of Jet magazine, LPs of Mahalia Jackson and Richard and Patti Roberts (the son and then-daughter-in-law of preacher Oral Roberts), and, on a vintage TV, a looped clip reel of 1970s televangelists discussing the demonic influence of Dungeons and Dragons on today’s youth. 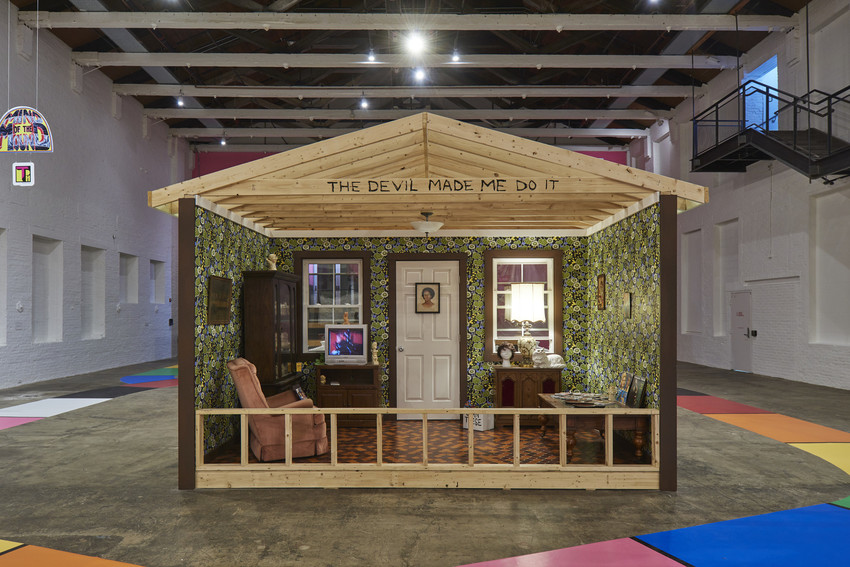 Next up is the Mound Museum, a black-and-white-striped, fake-fur-covered yurt topped with a rodent’s screaming head, which is being assaulted by flat, cutout board game pieces trying to climb its exterior. (These are the dreaded Vegans.) The Mound Museum’s Pepto-Bismol pink interior is calmer, chock-full of Hancock’s own, seemingly bottomless, collection of toys, arranged on shelves according to a clearly present but not entirely obvious taxonomy. Interspersed are the artist’s old school assignments—English worksheets where he was asked to describe a setting for his own story (one can see the seeds of the Moundverse sprouting), math tests, and so on. 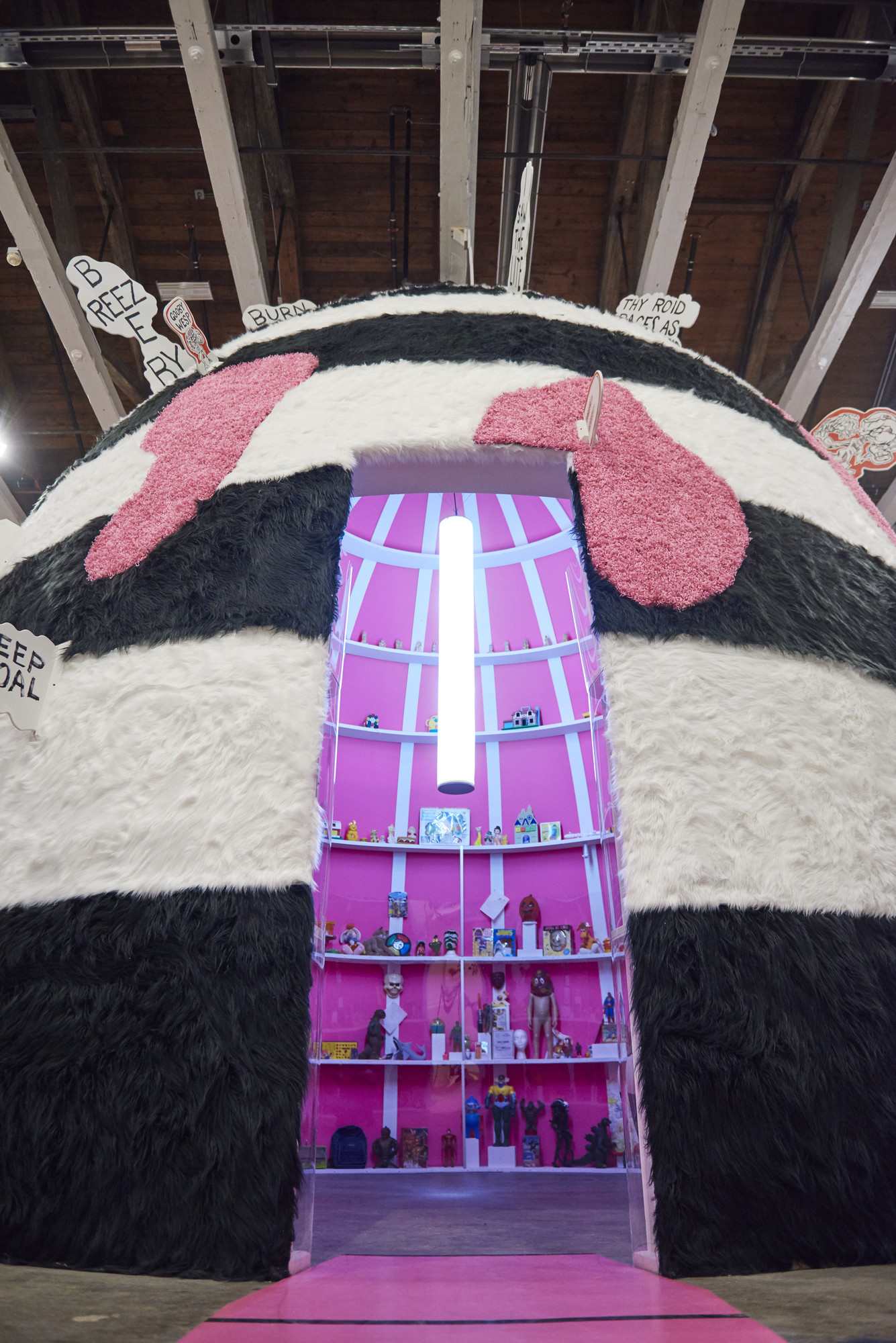 Collections of all types fill Hancock’s imaginary world. Throughout the installation, they serve both as autobiography and something like the opposite of autobiography—they connect us, reminding us of a shared experience across time and space. Ranging in date from 1972 to 1992, the toys, dolls, and board games that populate Hancock’s world span generations. Standing in front of Trenton’s Toy Aisle—another feature in the installation—I felt a visceral and immediate nostalgia at seeing a Mork doll (an eerily accurate likeness of Robin Williams, it must be said). Meanwhile, the young woman beside me had to explain to her boyfriend the premise of the practically prehistoric show Mork and Mindy, something she had stumbled across accidentally while surfing YouTube videos. 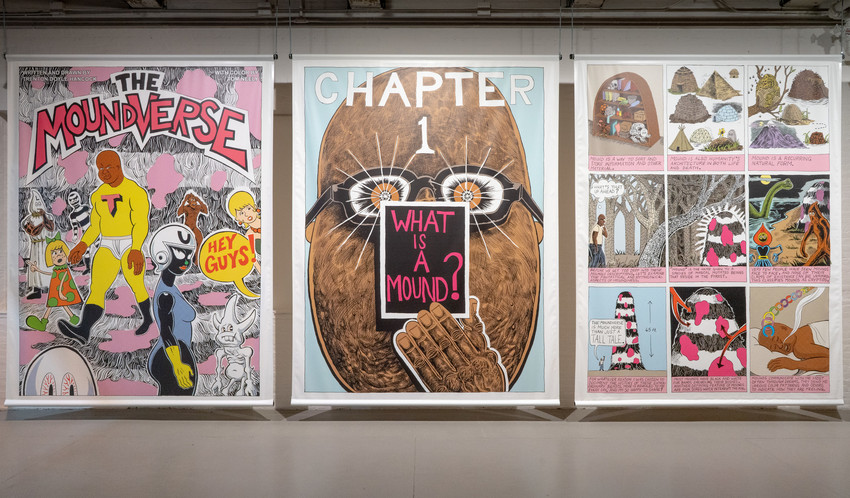 The unlikely possibility of human connection over such cultural detritus (whether toys or games or art itself) seems to motivate Hancock’s capacious thinking. On a large, two-sided vinyl banner that hangs from a metal support, the artist offers up an explanation of his Moundverse in the form of oversized comic book renderings. In one panel, under a depiction of Hancock himself wearing a beanie (or is it a mind-control helmet?) emblazoned with “Mind of the Mound,” he explains: “We were all born into a state of Moundness. By getting in touch with your inner Mound, you can easily communicate with other Moundish people.” 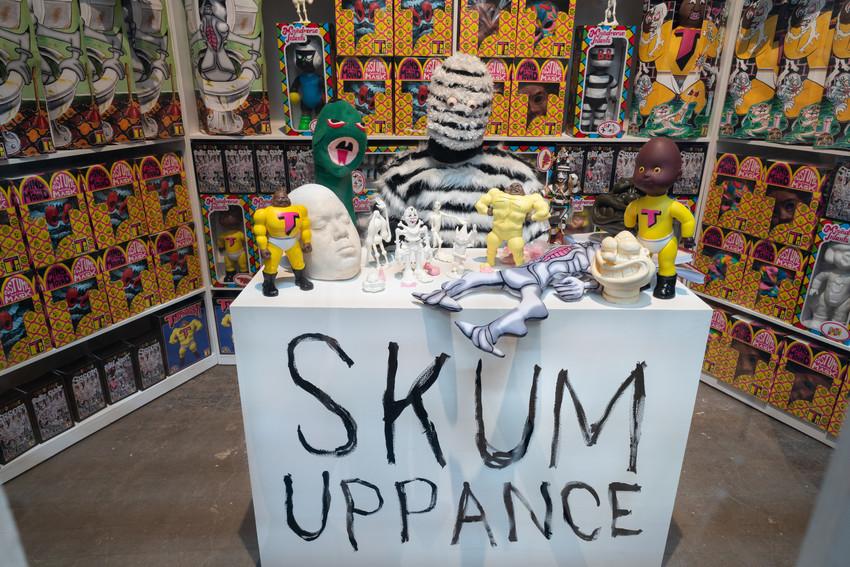 There is much to appreciate in this show—the sheer amount of stuff on display, the intricacy of thought that motivates every aspect of the fiction, and the artist’s unapologetic embrace of fun (and not in a merely superficial or spectacular or ironic way, but in a “I want to bring a kid and spend hours exploring this installation together” way). But perhaps most impressive is that, however big Hancock was thinking when he conceived this installation, he seems to be able to think even bigger. A circular display contains stacks of Moundverse™-brand baby dolls—the tip of a possible merchandising iceberg, some of which is available in the museum’s gift shop—while a room off the main gallery includes blown-up pages of the artist’s forthcoming, four-hundred-page comic book. Like our actual one, Hancock’s universe will keep expanding. As long as the Vegans don’t get him and he’s given enough space, that is.