“A weight of rock and time”: Robert Macfarlane heads down into the subscapes of the netherworld. 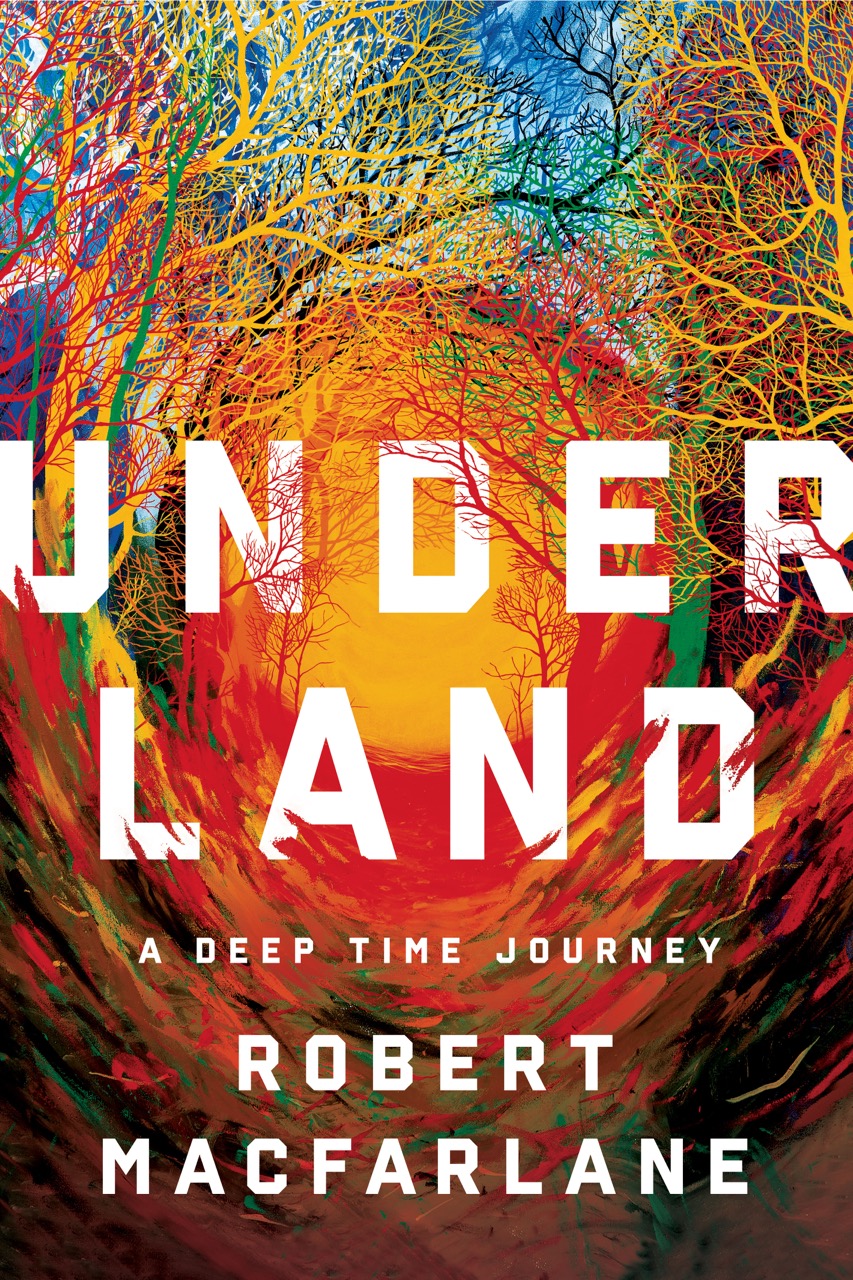 For clues to a writer’s aspirations, look to their admirations. In reviews and blurbs, they often praise in others what they revere about themselves, the qualities they’d like to be noticed. Landmarks, the previous major book by Robert Macfarlane—widely hailed as the greatest nature writer of our era—is crammed with clues because it’s a celebration of earlier nature writers. Over and over, Macfarlane pinpoints a blend of precision and lyricism in his formative influences: Nan Shepherd’s “brilliant exactness,” J. A. Baker’s “fierce stylistic clarity,” Clarence Ellis’s compulsion “to grade and sort perception.” The 2015 book is one long testament to Macfarlane’s faith in the power of exquisitely deployed words to fix and hold the beauty and eeriness of landscapes. This superstitious overestimation of language is inadvertently undermined by Landmarks’ wonderful glossaries of dialect terms for particularities of the British countryside or weather, which in their variety and profusion prove how arbitrary the attachment of one phonetic sound-shape is to its real-world referent. But every fiber of Macfarlane’s being—as with any true writer—resists this idea and insists that there’s a magical fit between well-chosen words and what they describe. Le mot juste is out there, if you can just find it.

Having exhausted the planet’s surface over five books, Macfarlane might well have mused “What now?” Perhaps that’s why he plunged below ground for his new, six-years-in-the-making book, Underland. As I started to read, it struck me that Macfarlane might also have grown frustrated with his own ideal of rhapsodic lucidity, a modality he’d amply mastered. Was he deliberately setting out here to test his talent by exploring places where his most cultivated sense, sight, would be challenged by a darkness only fitfully illuminated by the headlamp affixed to his brow? Rising to the surface of the text at various points, there seems to be a desire to be dumbstruck. One such moment occurs early in the book while he’s squeezing through a terribly confined passage in the Mendips of western England, where water has worm-holed the limestone hills: “Language is crushed . . . the pressure here is immense, a weight of rock and time bearing down upon us from every direction.”

Another reason for going underground might simply be grandeur fatigue. It’s as though his younger, mountain-infatuated self now feels somewhat callow to Macfarlane: searching for more sophisticated thrills, he’s swapped the near-kitsch majesty of altitude for the claustrophobic murk of the netherworld. One revelation provided by Underland is just how many types of subscapes there are. A Landmarks glossary titled “Underlands” is probably the seed of the new book, which is a lexical delight in its own right, a feast of terms for underground spaces: ghost rivers, dolines, barrows (or burial mounds), ossuaries, clathrate (very deep ice), the siphons and galleries of cave systems, sinkholes, and many more. Whether nature-made or man-built (like mines, sewers, bunkers), these subterranean locations represent in their entirety a new frontier of the unknown to rival space. Indeed, “Underground Astronauts” is the name adopted by a group of paleoanthropologists mentioned in the book, while Macfarlane himself coins the term “speleonauts” to describe the fearless cave divers who explore flooded passages far below the surface.

Macfarlane’s own explorations take him into the shadow city beneath Paris, a network of “quarry voids” originally tunneled for the mining of limestone to construct buildings above ground, then repurposed as boneyards for the disinterred dead of the city’s overfilled cemeteries, then later still used to farm mushrooms, and most recently turned into an outlaw adventure playground by daredevils. He visits the Carso, a region whose spongiform topography of stone riddled by water erosion overlaps the borders of Italy and Slovenia. Here, grottisti, as speleologists are nicknamed, risk limb and life to map a subterranean river that winds both laterally and vertically (underground waterfalls!). But this same perforated mountainous terrain was also a war zone twice during the twentieth century, scarred further by savage combat and stained by atrocity (prisoners pushed down fissures, sometimes alive).

As in his earlier books, like 2012’s The Old Ways, Macfarlane is obsessed with the idea of landscape as archive: the marks of man are readable in agricultural transformations as well as degradations wrought by extraction and pollution, but a landscape can also serve as a mute witness to human history. The “deep time” referenced in Underland’s subtitle points to a much longer scale, one in which humanity is the merest of blips. It’s not that rapid things don’t happen underground (flash floods, collapses, pit fires), and certainly the surface world has its own glacially slow processes. But there is something tilting toward timelessness about the geological. Plunging below takes you out of the rhythms of dawn and dusk, back into a womb-like non-time. Or, equally, into a tomb-like suspension and silence, given that the soil is where most cultures place the dead. In all his writing, but particularly strongly here, Nature provides for Macfarlane and his readers a form of religion for the godless, stirring sensations of awe, gratitude, and humbling insignificance. There is comfort too in the idea of all this weird beauty outlasting us; its imperishability offers a secular substitute for Eternity.

Underland is an exhilarating read, but it’s not flawless. Attentive readers may notice that in the latter third of the book, the preponderance of the action is taking place aboveground, on the approach to a rift in the crust or in the area surrounding such a portal. There are two chapters set in Greenland that magnificently describe an expedition along the Knud Rasmussen glacier, and into the nearby mountains, but spend only two and a half pages on the mission’s objective: a partial descent down a moulin, a pipe bored into the ice by meltwater. After such a buildup, the journey down this “radiant blue sci-fi tube” is anticlimactic.

But it’s here, in the frozen North, that Macfarlane most explicitly addresses what in earlier chapters had only been touched on: the limits of the written word. “Language seems impossible, impertinent, sliding stupidly off this landscape. Its size makes metaphor and simile seem preposterous.” Contemplating the shrinking of the polar cap, Macfarlane’s mind reels in the face of “its vastness and vulnerability”: ice feels like a stubborn, inscrutable force “beyond our comprehension to know but within our capacity to destroy.” The sight of black ice “calving” off the glacier into the ocean makes him nauseous. For once, his mystic-materialist impulse to animate the landscape, to recognize it as a living thing and thus a relative to the human, founders in the face of its eldritch indifference. “Here was a region where matter drove language aside. Ice left language beached.”

If the unconscious desire driving Underland is Macfarlane’s wish to defeat his own eloquence, one wonders where he can turn next to find the sublime: experiences of such uncontainable scale and strangeness they cannot be circumscribed (literal meaning: “written around”). Bodies of water have already been “done” by Roger Deakin, whose “exhilaratingly exact” prose was celebrated in Landmarks. For Underland, Macfarlane joined a diverse range of underground cosmonauts on missions into mystery zones beneath our feet. Must he now venture into outer space?