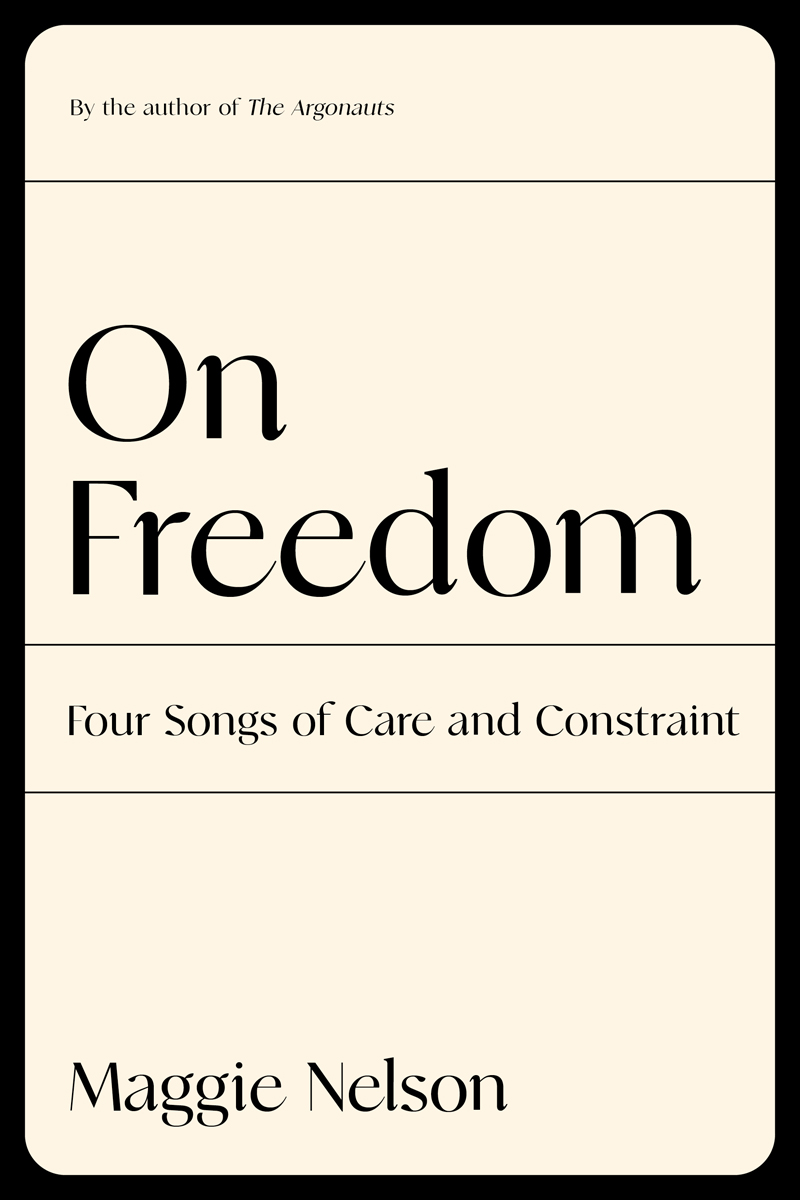 In the fall of 2016, philosopher Paul B. Preciado wrote: “Happiness lies in the ability to feel the totality of things as being part of ourselves.” Preciado was speaking of Karl Marx, but his characterization of happiness as empathic altruism could justifiably define the affective spirit, breadth, and generosity underpinning Maggie Nelson’s On Freedom: Four Songs of Care and Constraint, also begun in the fall of 2016, but in America’s blighted context.

On Freedom is the work of a public intellectual—a sustained, uncompromisingly even-handed meditation on the barbed cultural and political debates around personal freedom and interdependence in the spheres of art, sex, drugs, and climate. The carefully worded title is unsexy, and Nelson readily concedes that “freedom” is an eviscerated term, co-opted by the right, but it is a concept she hopes to reclaim and, as per Emily Dickinson, to “tell it slant.”

Through twists and turns and idiosyncratic forays, Nelson pursues the ways in which care and constraint impact on any lived experience of freedom. For Nelson, liberation is not a momentous goal we achieve and move on from, but its “unending,” daily practice in the here and now. Early on in her book, she writes: “The practice of freedom . . . is what, if we’re lucky, takes up most of our waking lives.”

Nelson’s study relies on many informants from academia, the art world, literature, Buddhist philosophy, and science; it is dense with references, analyses, provocations, and arguments in the style of her earlier scholarship in The Art of Cruelty: A Reckoning (2011). But it also contains the sympathetic, straight-talking, dare I say “maternal” voice of Nelson’s best-selling auto-theory memoir, The Argonauts (2015).

Underscoring that the freedom of white people in the United States is historically bound up with enslavement and genocide, Nelson’s first chapter, “Art Song,” takes a critical look at recent eruptions surrounding two artworks by white artists: Dana Schutz’s Open Casket, an expressionistic painting of the infamous photograph of Emmett Till’s mutilated corpse, and Sam Durant’s sculptural work Scaffold, an amalgam of seven replicas of historical scaffolds, one of which had been used to hang thirty-eight Dakota men in 1862. Both artworks provoked heated public debate; the latter was ultimately dismantled.

Nelson’s approach to understanding the conflicts, and what is at stake for artists and communities, is relentlessly dialectical, presenting multiple viewpoints and critiques. First, there is the outright demand for an artwork’s destruction (as Hannah Black suggested in her famous letter to the Whitney Museum, which featured Open Casket in its 2017 Biennial). Then there is the idea that restitution and divestment are correct and require sacrifice. Finally, there is the notion that art cannot be policed and that censorship is unacceptable. As evinced in her writing in The Art of Cruelty, Nelson has a vast capacity to embrace and “hold” the contradictions of difficult art. This critical compassion is one of her great strengths, and it is on full display in “Art Song.”

Similarly, in “The Ballad of Sexual Optimism,” Nelson takes a subtle, clear-eyed look at both the liberating aspects of the #MeToo movement and its problematic downside—its “roadkill,” or collateral damage. While the movement has undeniably held egregious offenders and violators to account, Nelson is quick to point out that a side effect of its campaign has been a suppression of the multivalent registers of female sexuality and agency. The sexual Imaginary and its desires are arguably more complicated and contradictory than any other area of the human psyche (“sex can also entail moving toward difficulty and wrestling with pain”), and much of this chapter intricately discusses all that goes unsaid, unexpressed in #MeToo, especially from a queer perspective.

This category of opinion is rarely aired publicly, but Nelson is forthright and sanguine in her willingness to speak candidly about the missteps and blind spots of a movement that simplistically admits only perpetrators and victims, and unwittingly erases complexity and ambiguity. Her research is profuse and rich, and she cites many precedents, including the sex wars of the 1980s, in which academics and activists, queer and straight, fought for female sexual agency and against censorship.

Chapter three, entitled “Drug Fugue,” turns to multiple accounts by novelists, memoirists, and theorists to inform on addiction “in extremis”: impulses toward states of “freedom and unfreedom” accessed via hard drugs and acts of self-subjugation. In this exploration, Nelson gives most of her attention to three books: Avital Ronell’s Crack Wars, Ellen Miller’s Like Being Killed, and Iris Owens’s After Claude.

Despite her foregrounding of diehard aspects of drug and alcohol consumption, Nelson freely acknowledges the possibilities of more benign forms of release afforded by substances. Nonetheless, there is limited contemplation of, say, the healing properties of psilocybin, the all-night ecstasies of raves, the fifty-year history of the (very diverse and inclusive) Mancuso Loft parties, the zany recordings of tripping in Walter Benjamin’s On Hashish, or even the modest pleasure in partaking of a joint, a line, a pill, or a hallucinogen while zoning out to music or clouds, because, as Hilton Als put it: “one of the reasons you get high is to forget who you are and concentrate on how you feel as the world melts away.” Als wrote the above in relation to the radical opioid consumption of the author Tove Ditlevsen, but I suspect he intended his assertion to include the minor, less obsessional drug fugue as well.

Even though “Drug Fugue” taxed me, as a reader, it had the paradoxical benefit of delivering an engrossing bibliography: I’ve had a long-standing interest in the literature of addiction, and Nelson’s chapter is a syllabus unto itself.

Nelson concludes “Drug Fugue” with an appreciation of Preciado’s self-guided, bio-hacked experiment with testosterone, a substance he takes to transition but also for the purity of its high—like coke or meth without the downside. He relates these experiences in his dense, sexy memoir-study Testo Junkie, of which Nelson says: “[this is] precisely the ‘queer stuff’ I want to read.” Here, I am in total agreement.

The final chapter, “Riding the Blinds,” on climate change, is a gut punch and a wake-up call for anyone who needed it. There is much about care in the chapter, and Nelson’s then-toddler son’s passionate enthusiasm for steam engines becomes an allegory for the thrill of power and speed and anything that could be said to be awe-inspiring about the machines of the industrial age, arguably also the inauguration of the Anthropocene.

In a Zoom book event, Nelson described our reliance on fossil fuels as so entrenched that we need “oil [just] to think.” Yet, in this concluding chapter, the specter of foretold annihilation is mitigated by Nelson’s beautiful and tender writing about her young son, and his precocious empathy and understanding of the evolving climate crisis. The maternal voice is fully in evidence as Nelson negotiates this crucial realm where the dueling paths of freedom and interdependence are most perilously and inextricably entwined.

Moyra Davey is an artist and writer. She is working on a new video about dance parties and community.