A new website shares a dizzying array of Syrian music cassettes from the 1950s through the early 2000s.

Vinyl records have led the resurgence of interest in all things vintage and analog, but we shouldn’t forget the cassette tape, the dominant analog medium of the late twentieth century—a format that was especially important in the developing world. In my immigrant Indian household, the cassette tape was king in the 1980s, and remained so well into the next decade. On my trips to India, I had to hunt for LPs, especially coveted collectors’ items, but cassettes were plentiful and ubiquitous, sold on the streets or available in train stations, temples, stalls, convenience stores, and phone shops. CDs started to take over in the early 1990s, but cassettes continued to persist. “Cassettes and cassette players are cheaper and more durable than records and turntables, and their power requirements are more easily met,” wrote ethnomusicologist Peter Manuel in his indispensable 1993 book, Cassette Culture: Popular Music and Technology in North India. Producing cassettes is also much cheaper than pressing vinyl, and at the simplest level, the dubbing process only requires two tape machines. “At the same time,” he argues, “the lower costs of production enable small-scale producers to emerge around the world, recording and marketing music aimed at specialized, local, grassroots audiences rather than at a homogeneous mass market.”

For these reasons, tapes were widely popular in many parts of the world, Syria being one potent example. Syrian Cassette Archives, a new website created by a team led by Iraqi-American musician and collector Mark Gergis and Damascus-born DJ and community organizer Yamen Makdad, offers a window into the country’s rich musical history through tapes. Gergis grew up hearing pop by the likes of legendary Egyptian vocalist Umm Kulthoum and famed Lebanese diva Fairuz before making his first of many trips to Syria in 1997, where he began amassing mountains of cassettes as he immersed himself in the local music. (Gergis is best known for bringing the energetic Syrian singer Omar Souleyman to Western ears and for his many compilations, including the 2004 collections I Remember Syria and Cambodian Cassette Archives, released for the Sublime Frequencies label.) 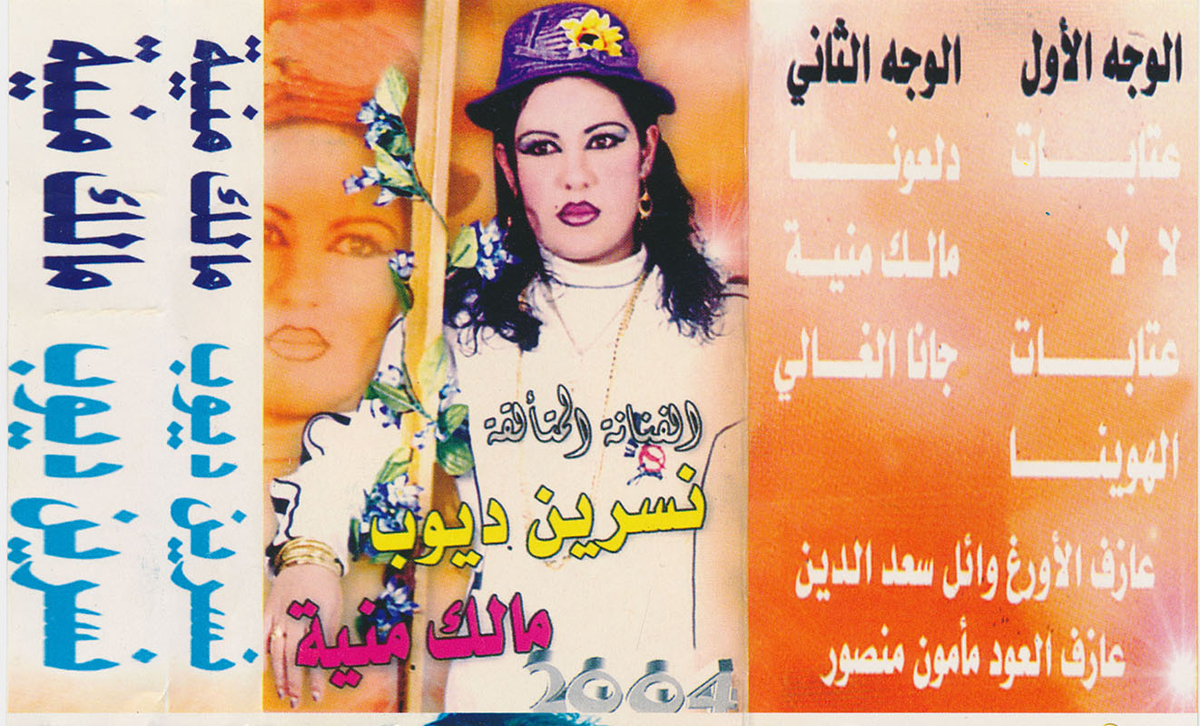 The website is colorful and anarchic, evoking the chaotic sensory experience of exploring a crammed, dusty shop. A kaleidoscopic array of scanned cassette covers is on the main page, with a minimum of information. The art is eye-catching—Gergis appears to have been drawn to tapes with intriguing aesthetics. Often, these covers appear to be a DIY cut-and-paste of an artist photo against a hallucinatory, multicolored backdrop. Click on any of the images and the next page provides a brief identification of the cassette along with streaming audio files. You can listen not by individual track, but in true cassette style, by playing “Side A” or “Side B.” You can also browse via genre or decade, and there’s a section where you can read a brief selection of commissioned essays and interviews.

The recordings range in date from the 1950s through the early 2000s, giving a window into the historic cultural vitality of a country that has experienced unspeakable trauma in its recent past. Many cities, like Aleppo, which is famous for art and music, have been, in a large part, destroyed. Hundreds of thousands of Syrians have been killed and millions are displaced. Recordings from a bygone Aleppo are well-represented here. 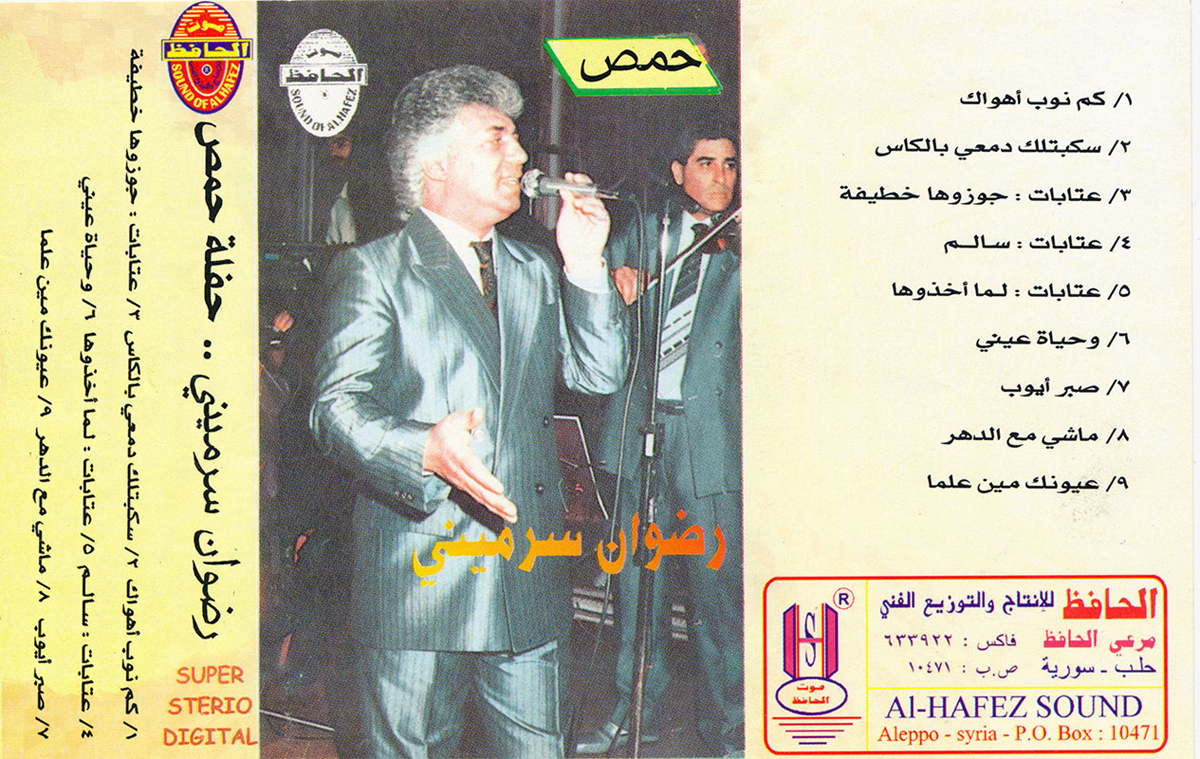 One of these tapes is by the late Radwan Sarmini, whose career was cut short in 1990, when he was murdered in his home, according to the site’s Twitter account. The cover of his album Afrah halab (Aleppo Weddings) depicts the singer sporting a silver-gray pinstripe suit and a bouffant hairdo, holding a microphone onstage with a band. In what sounds like a live recording, he croons sentimental, lovelorn ballads with titles like “I Shed My Tears for You.” Another album from Aleppo, Nisreen Dyoub’s Malak menya (I Owe You Nothing), features her singing alongside a bracing mix of traditional oud fingerpicking paired with brittle, synthetic keyboard sounds.

Right now, Syrian Cassette Archives contains about fifty albums, but the number is expected to rise, as the project is still in a pilot phase. Some additional features would make the website easier to use and deepen the connection to the artists. A way for listeners to donate to the individual musicians or their families would be welcome (though you can donate to the project itself). Each album could come with a description or a review offering more context. Playlists in different genres could offer a useful introduction for the uninitiated (there is currently one mix curated by Gergis available, but more would be helpful). It would also be nice to more easily fast-forward and rewind (you currently can, but it’s choppy)—as one could with a real cassette deck.

Despite these minor drawbacks, the endeavor is an essential reminder of the humanity of Syria, a country so often portrayed in the news as a war zone. Even in just the visual aspect, we see the celebratory nature of so many of the recordings—the women with kohl-rimmed eyes and bright lipstick, men with jolly mustaches and snazzy suits, happy families and couples. The music is filled with joy, color, brightness, and hope. “These ephemeral tapes; this is exactly what we hope isn’t lost,” Gergis said in a recent interview with the website Syria Untold. “Perhaps somebody, Syrian or otherwise, can find something here. They might find something that they never heard as a result, because we happened to pluck that tape out of history, out of a window of time, and preserve it.” Online, these hazy sonic memories of Syria become vivid once again.