An exhibition populated by bodies at rest, in flux, and in solidarity. 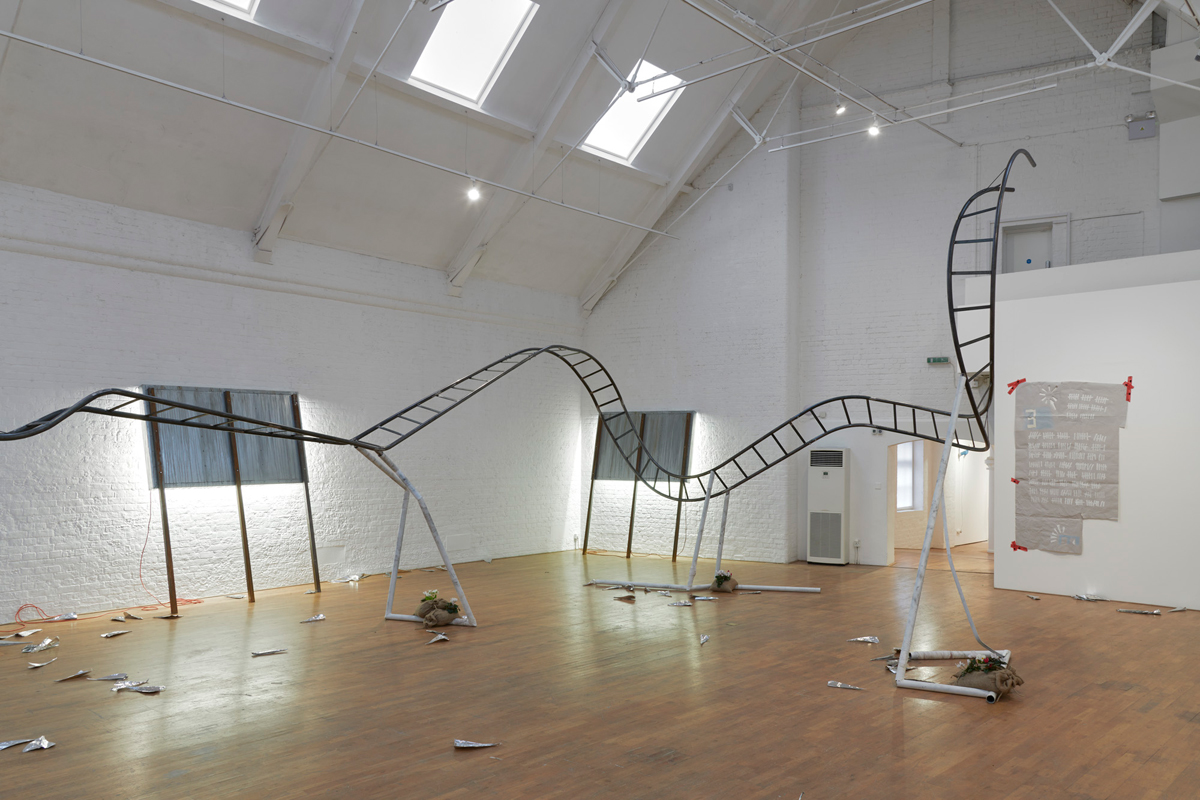 Lines go up. Lines go down. The twisted and torqued roller-coaster track of the steel sculpture Gravity Road (2020) winds its course through the large first gallery in Jesse Darling’s solo exhibition No Medals No Ribbons. To my eyes, exposed as they have been to anxiety-inducing data about climate, contagion, and crypto, the rising and falling rails also resemble the lines of a graph. It’s an unexpected comparison, because these “lines” are not data-driven abstractions but heavy, monumental, physical realities that evoke movement at speed, ups and downs that would be felt in the body, if they were not now at rest.

When I met Jesse in 2013 at the Venice Biennale, we were both conscious of playing some kind of role in a cultural moment that had been labeled “postinternet.” The term held together many contradictions, and Jesse and I traipsed about to well-funded installations visited by autocrats and DJ nights in squats on unfashionable islands. All of this was postinternet, because everything was. Paraphrasing cultural theorist Nicholas Mirzoeff, Jesse once described the post- in postinternet as referring to “the crisis of” the internet, rather than afterward-ness, and levied criticism at artists’ unthinking extraction of the fruits of others’ “affective” labor, in the form of memes or user data. In contrast to the work of many of their peers, Jesse’s own writing and projects in this period centered that labor and spoke to a yearning for solidarity and community under the conditions of the internet and social media. 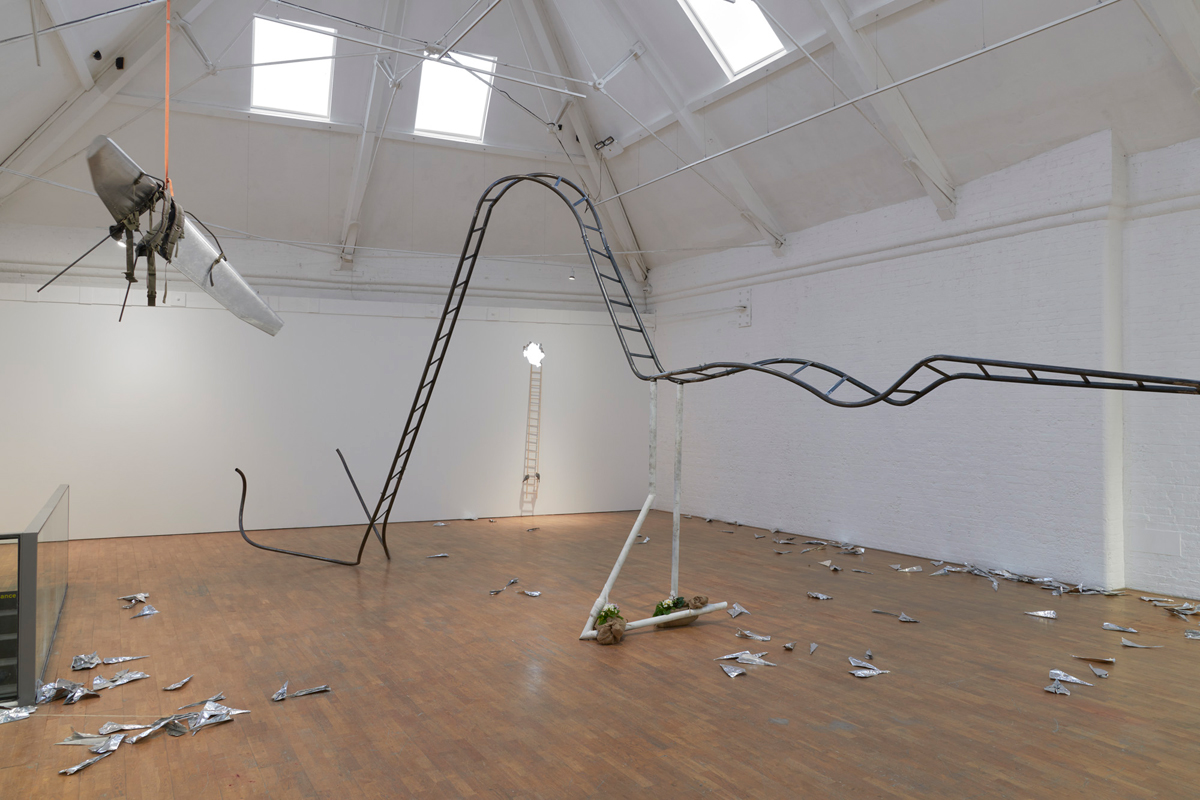 Named for a coal-carrying train that once ran down an inclined track and was repurposed as an amusement, Gravity Road is an unusable and melancholic attraction, setting a tone that is shared by the other works in the room. The floor surrounding it is littered with fallen shiny paper airplanes (Planes, 2019), which read ambiguously as toys and as symbols of travel or military attack. A pair of metal wings, sized for a small human, is suspended above the sculpture, attached to worn straps from a rucksack (Saint Icarus [attributes], 2018). A ladder leads to a hole broken through the white plasterboard, revealing windows behind, suggesting a hurried, chaotic escape (Ascension Device for Birds, 2018/2022). Lighted signs that might be used to advertise roadside cafes or tourist sites lean against the wall, illuminating it with a message that cannot be read (Embarrassed Billboard 1 and Embarrassed Billboard 2, 2016/2022). They are about as close to a screen as one will find in this show, which focuses almost single-mindedly on sculpture, alongside a few drawings. Although Jesse’s thinking about the internet had a profound influence on me, the absence of the digital here does not come as a surprise. The internet was only one topic in their work, part of a broader inquiry into conditions of collective living and relating under various systems of regulation. 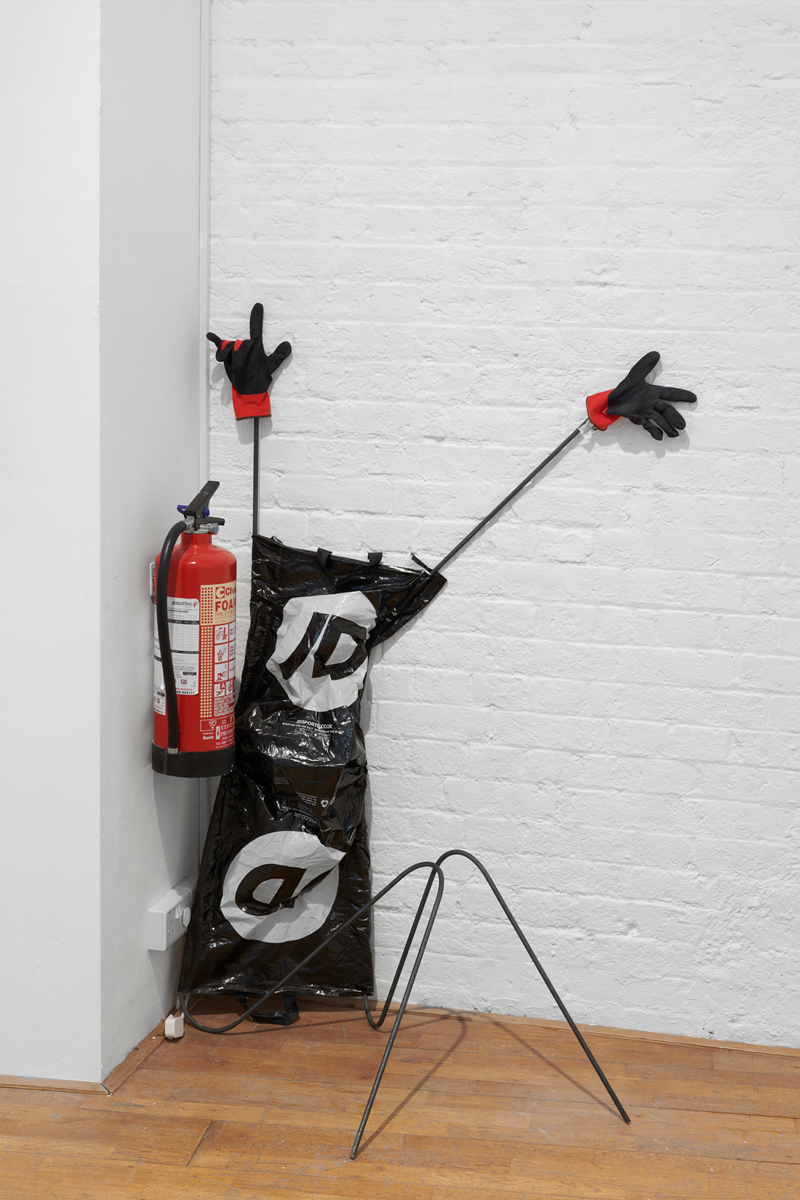 What does come as a surprise is the palpable air of abandonment in this first gallery. The exception that proves the rule is tucked away in the corner: Present! (2022), a human-size steel frame wearing a plastic carrier bag labeled with the logo “JD,” throwing their hands up as if in exasperation. Marking a contrast with this isolation, the ensuing galleries all contain congregations of objects that seem to enjoy active, if absurd and sometimes tragic, social lives. The exhibition is named in honor of a distant relative of the artist who constructed prosthetic limbs during World War II; there are many devices on display that offer various forms of support (crutches, chairs, vibrators, coffins). But these are not included to evoke the absence or incompleteness of a body; rather, they are bodies of a kind. Even a darkened chapel, with saintly relics and icons assembled from bits of trash, debris, and petrochemical waste products, offers entry, via contemplation, to whatever collective religious realm might be available to the society that produced these abject materials. 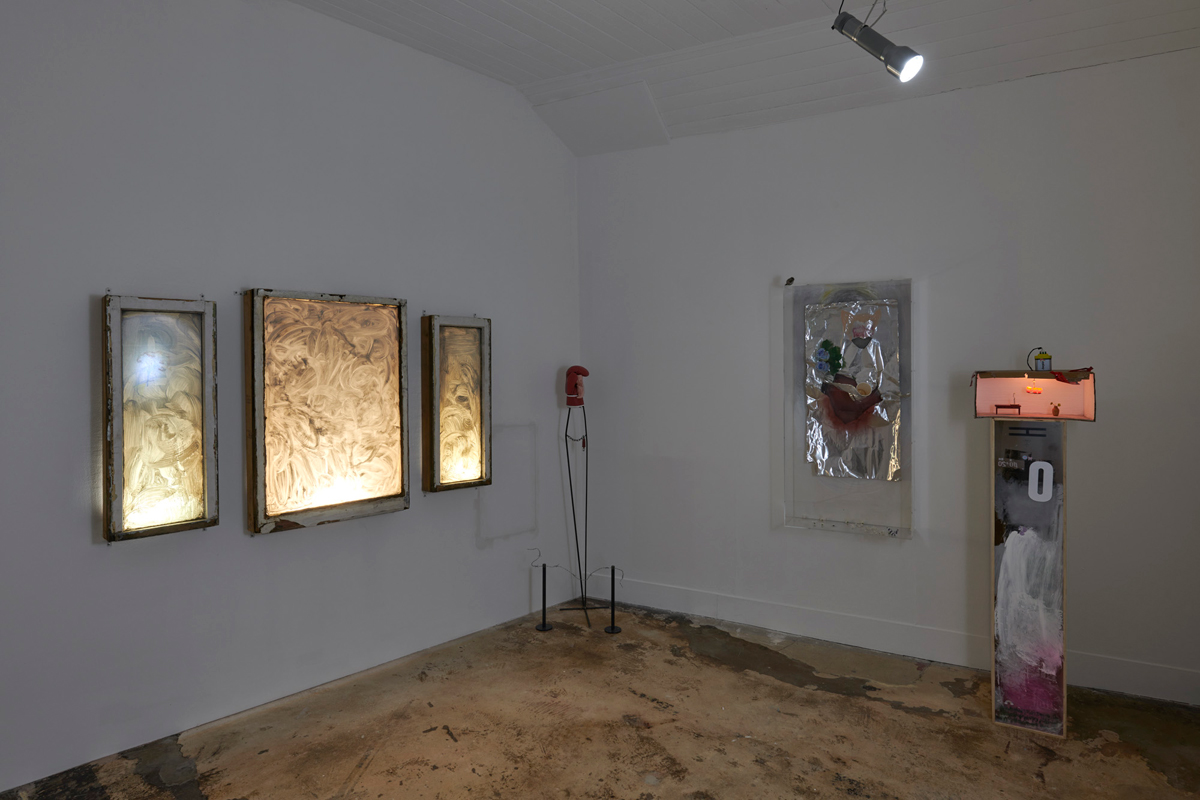 The final gallery is especially populous. If the twisted roller coaster track had suggested stillness and abandonment, here many of the objects seem ready to spring into action or are already engaged in it. Uh oh Baby She’s a Tourist (2017/2022) has plenty of potential but no apparent purpose. The piece features a pair of handmade prosthetic breasts suspended from a four-legged metal frame, a length of tubing emerging from the center of the ample bosom. An invigilator’s chair (Chaise, 2016) curtsies in one corner; a vitrine swoons in the other (Epistemologies [collapsed cabinet], 2018/2022). Two busts—hooded, feline, light purple—modeled from silicone and plaster stare longingly into one another’s eyes (Le Baiser [no more Saint Jeromes], 2017). 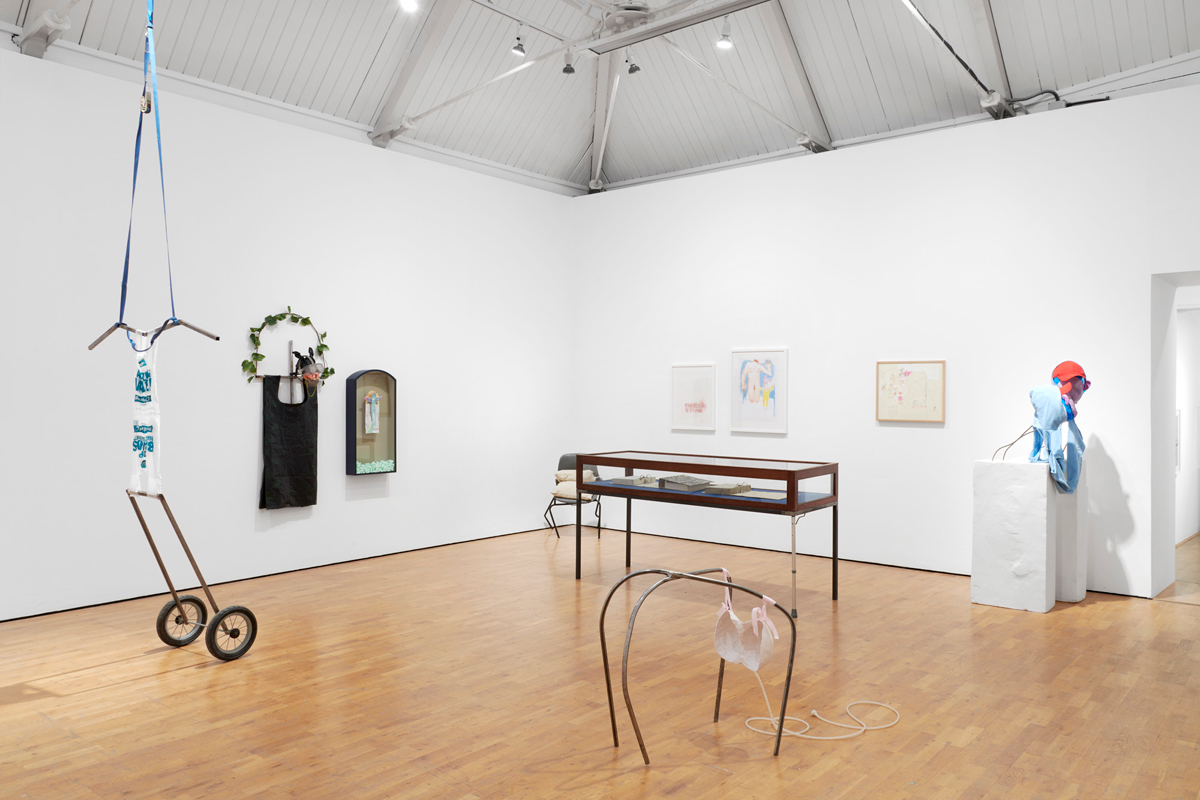 This “menagerie of sculptures,” (Jesse’s term, as quoted in the wall text), is accompanied by a number of their religious icons, anchored by Virgin Variations 1 (2019), a reliquary of twenty-two wooden boxes that resemble child-size coffins. Arranged in a double-stacked row, each box offers a unique memorial—assembled from toys, packing tape, stickers, cardboard, and found images—to one of Saint Ursula’s eleven thousand “virgin followers” of legend, who were martyred in fourth-century Cologne. Despite the grave subject matter, their presence in this space, with its lively gathering of differently abled objects, contributes to the sense that this is not a mausoleum but an experiment in reanimation. 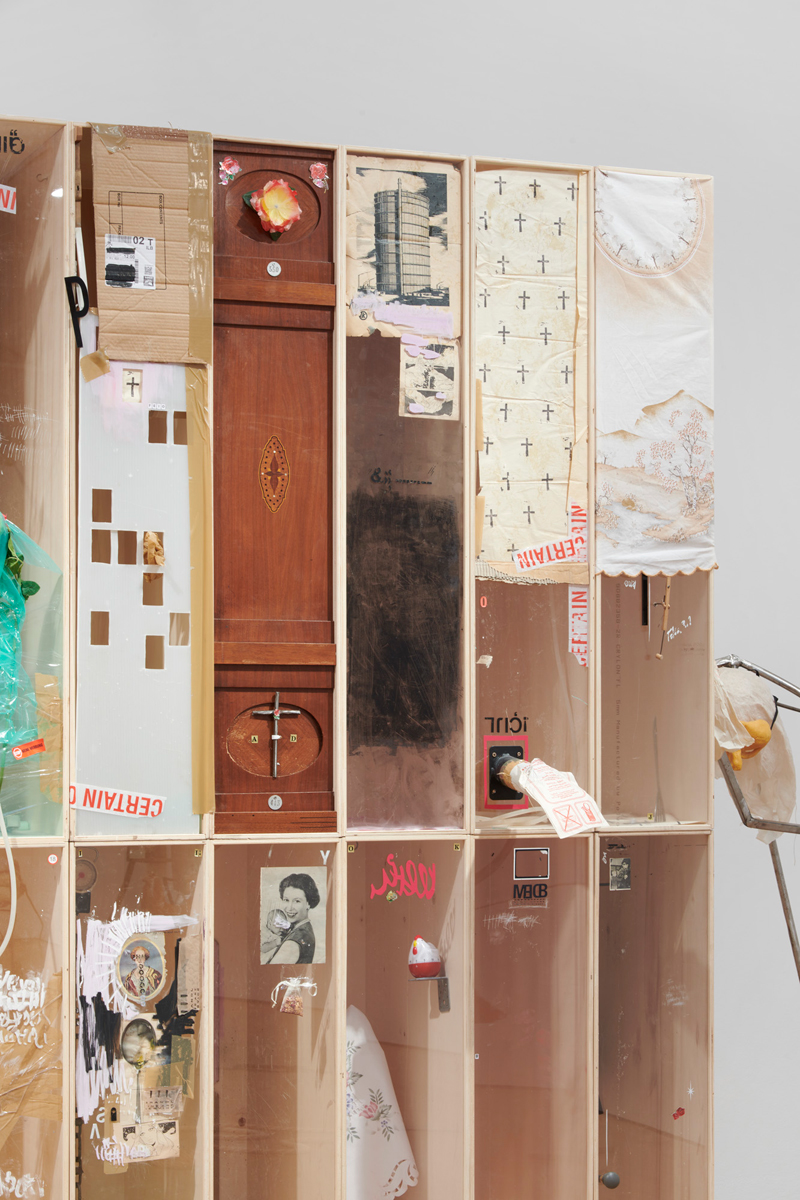 I made a long voyage from New York to Oxford to see this exhibition in part because Jesse hinted that it might represent an important inflection point in their work, or even a full stop. In some parallel world, I can imagine them continuing on the path suggested by Virgin Variations and making a box for every one of the victims—a devotional practice playing out over years. But then the two rows would expand to become a grid, and Jesse’s artistic output does not serve such informatic structures. What it has served is a hope for community and solidarity. That hope is present here in the form of strange social objects that implicate the visitor in networks of relations, sculptural entities that bear the traces of violence and control—debris of the petro-industrial complex, reminders of historical patriarchal violence, evocations of hybridized and technologized bodies—but remain defiant, finding strength in numbers against a system that would classify them as crazy, sick, or worthless. 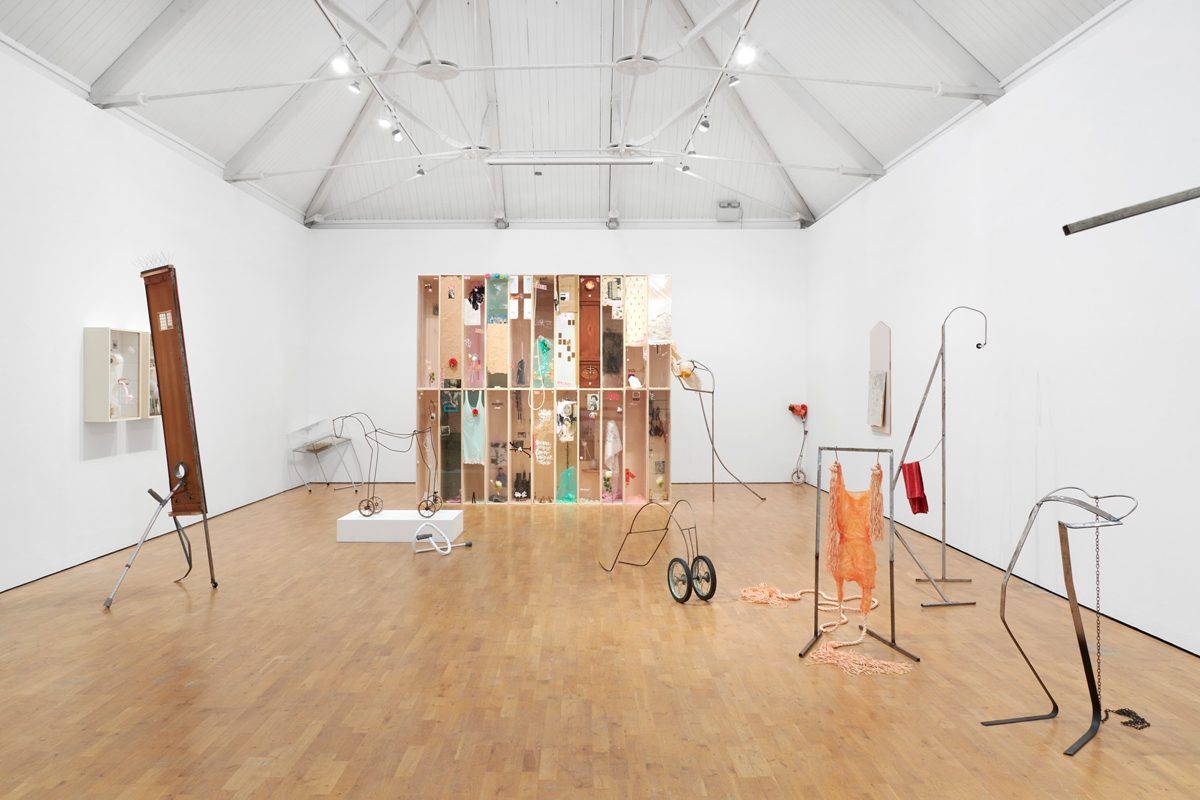 But does that hope still persist in that first room, with its abandoned ride and downed planes? The question has lingered in my mind since seeing the show, and in response I can only join the sculpture in the corner, Present!, in throwing up my hands.

Michael Connor is Artistic Director of Rhizome, where he oversaw the Net Art Anthology initiative, a web-based exhibition, gallery exhibition, and book that retold the history of online art through one hundred artworks from the 1980s to the present. Early in his career, he worked for several years at FACT, Liverpool as Curator of New Media, where he worked with artists such as Cory Arcangel, JODI, and Shu Lea Cheang. He has curated a wide range of exhibitions and projects internationally, including working as coordinating curator for the Screen Worlds permanent exhibition at ACMI, Melbourne. He has been at Rhizome since 2013, where he is currently working on editing Emotional Bandwidth, a book by Gene Youngblood about the work of Kit Galloway and Sherrie Rabinowitz.